It was time to head back home. Our cats would be taken care of until Saturday morning, so our goal was to be home around lunch time that day. That meant two full days of working our way north and then a final push on the last day.

We decided to try our BnB’s breakfast to give us a nice send-off. This was a mistake. The “full breakfast” was quoted at 25€ per person. I couldn’t even imagine what a 25€ breakfast would contain. Pancakes? Toast? Eggs? Bacon or sausages? Hash browns?. Memories of massive US breakfast platters flashed through my head and it was all too much. We decided to go à la carte and pick and chose a couple of particular items.

We sat down at a table already laden with a basket of sliced breads and tiny jam jars. I asked for a glass of orange juice and scrambled eggs, and Dan ordered yogurt. We ate some bread and jam (the bread was not bad, but nothing special. The jams were nice) and Dan’s yogurt came out with a bowl of muesli. My scrambled eggs came out shortly afterwards. Strangely, the eggs were in a bowl and were odd-looking, almost powdered. The first bite was surprising: nothing but salt. It was disgusting and inedible. The server didn’t seem to care when I said as much but she did offer to get me a fresh bowl of salt – I mean eggs. I declined, as at that point I just wanted to be gone. They ended up charging us the full price for the meal, since the à la carte price would have been higher (!). So 50€ later we packed up our bags and were only too happy to leave.

We departed Lourmarin in a different direction than we came in and it was awesome! Well, other than the really slow van we couldn’t pass. But otherwise it was a great stretch of road. There were a lot of bicycles in the first section, but eventually we left them and the van behind and had the open road to ourselves.

More lavender fields – they smelled awesome in the morning air 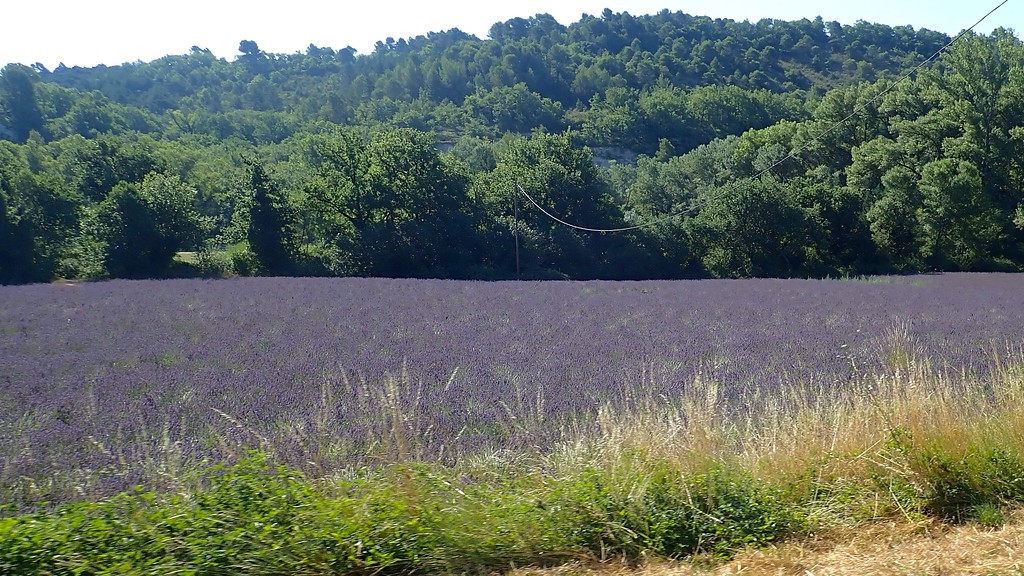 I love traveling on roads like this: open, scenic, gentle undulating curves and nothing to slow me down 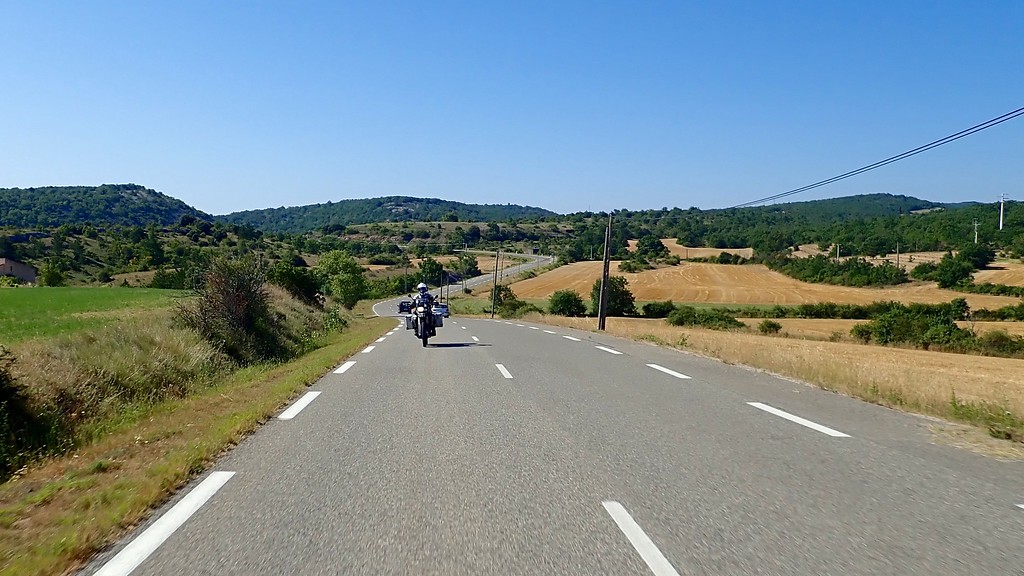 One of the many hill towns we passed in this region

The road snaked through villages along the way

After the town of Apt, the roads and views opened up considerably. There was still very little traffic and the morning air was refreshing. I could ride this stuff all day! 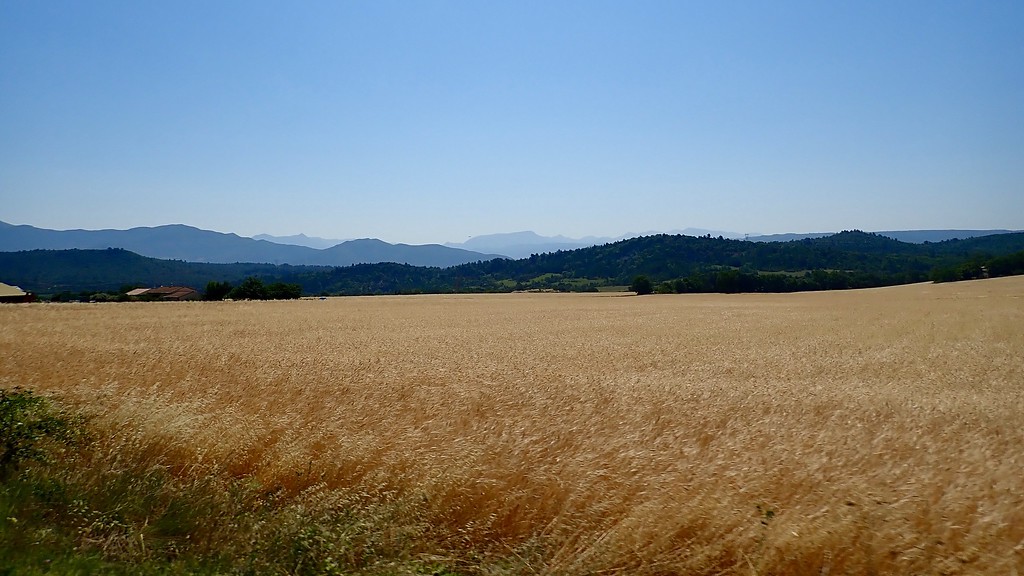 It was difficult to vary our route too much through this region. Sure, we probably could have sourced smaller and more remote roads, but we never would have made it home on time. Instead we double-backed on some of the same roads that we had taken south on Monday. But as I’ve always said, every time you ride a road, something is different. 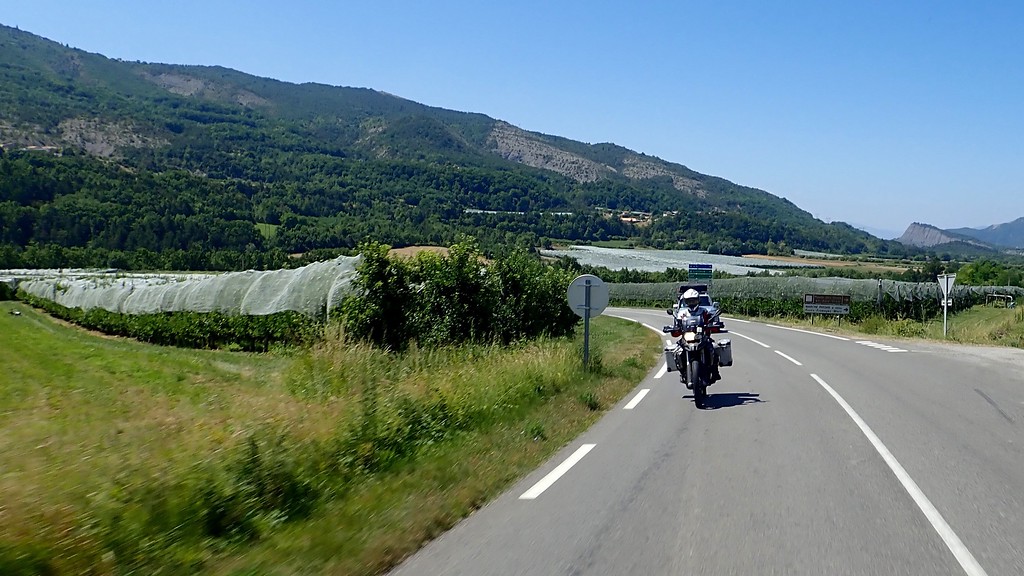 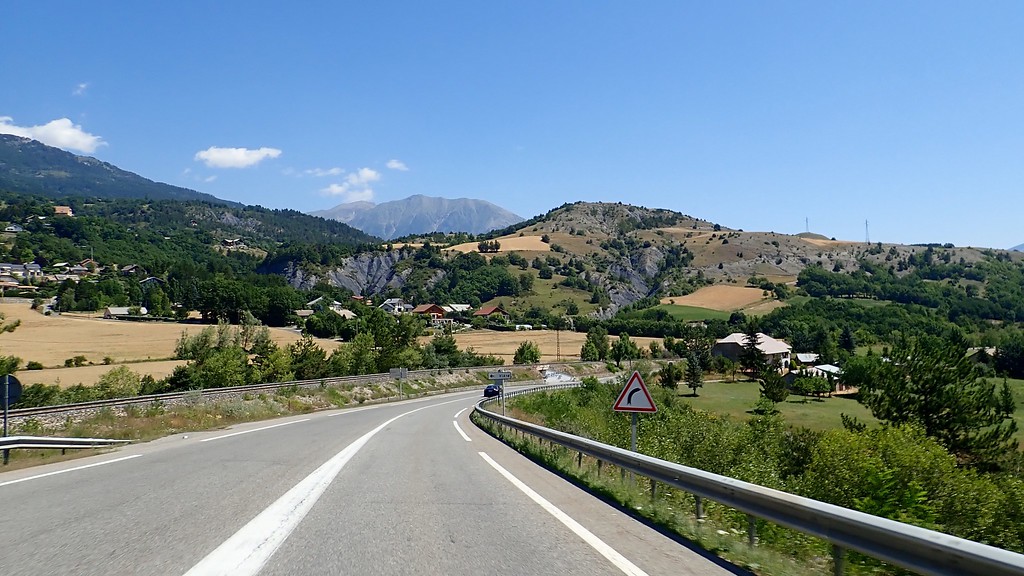 We passed Embrun and our lunch rest stop from the other day. The traffic was slower today and the temperatures were rising as we traveled further north.

And then we reached the outskirts of our night’s lodgings: Briançon

The town of Briançon has a long history dating back at least to the Romans and is known primarily for the number of fortifications that had been built over the centuries. The original walled city was built in the 17th century and it has been kept remarkably intact. In my online search for the night’s accommodations I wanted to find some place that was well on our route home, but was somewhere interesting. Our time in Saint-Ferréol showed that while a “quiet getaway” could be nice, this was not the trip for it. Now I wanted us to be in the center of things, with interesting sights right outside of our door – and maybe even the building itself. I think I struck the jackpot with the Auberge de la Paix in the heart of Briançon.

The town of Briançon, with our hotel is in the red circle 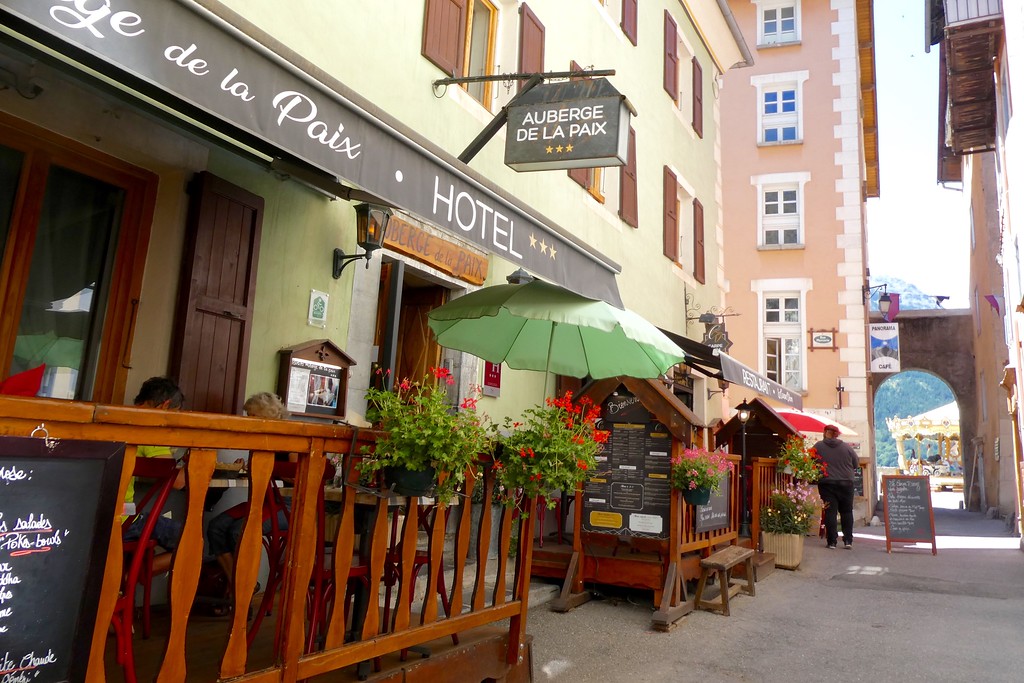 We ditched our bags and gear in the room as soon as possible and immediately went out to see what mysteries Briançon held. It was a small place, so this didn’t take too long.

The main street through Briançon 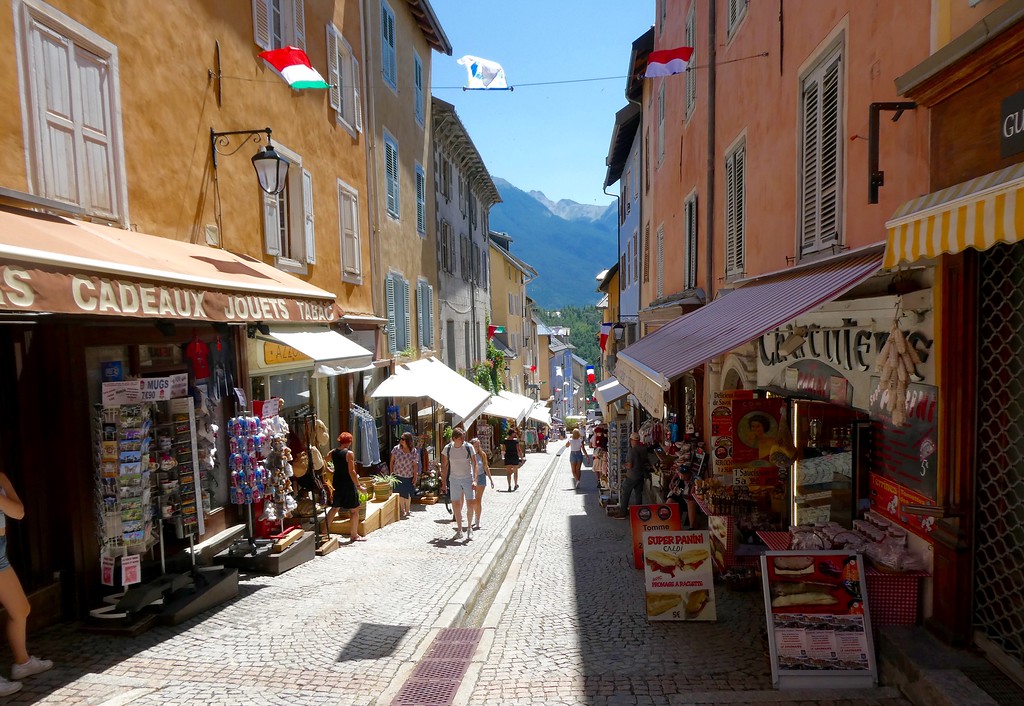 Running water down the middle of the street 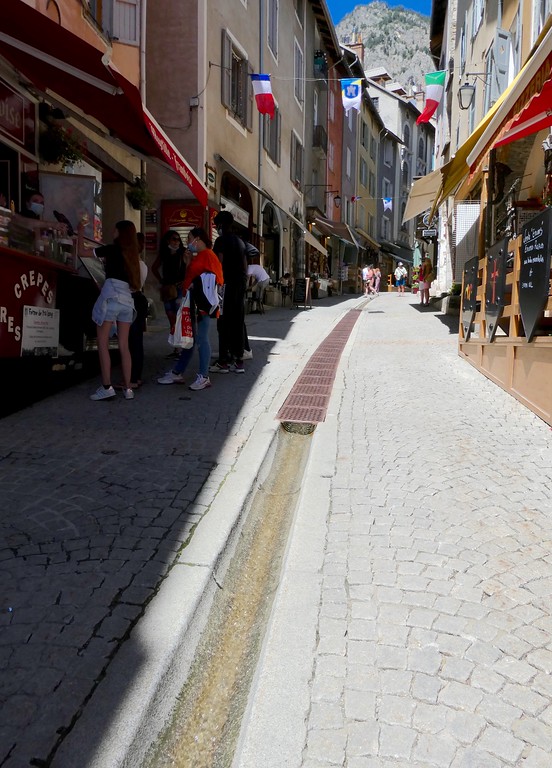 Side street, with our hotel on the left 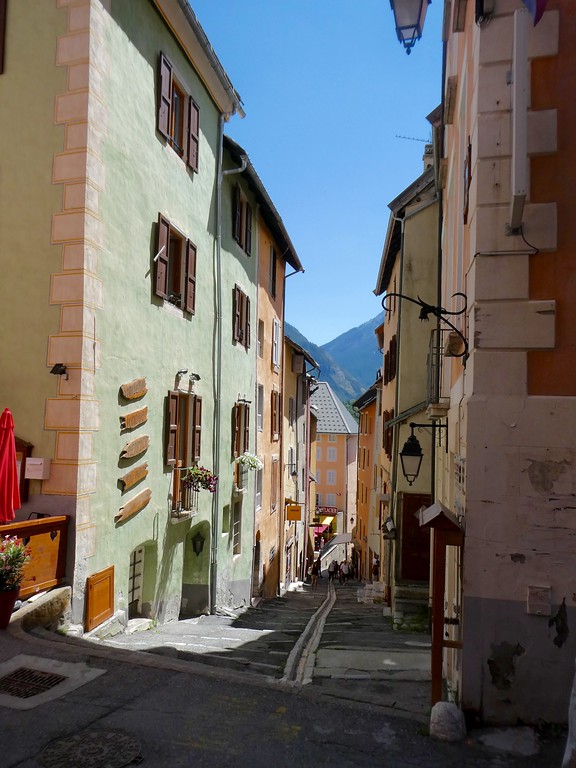 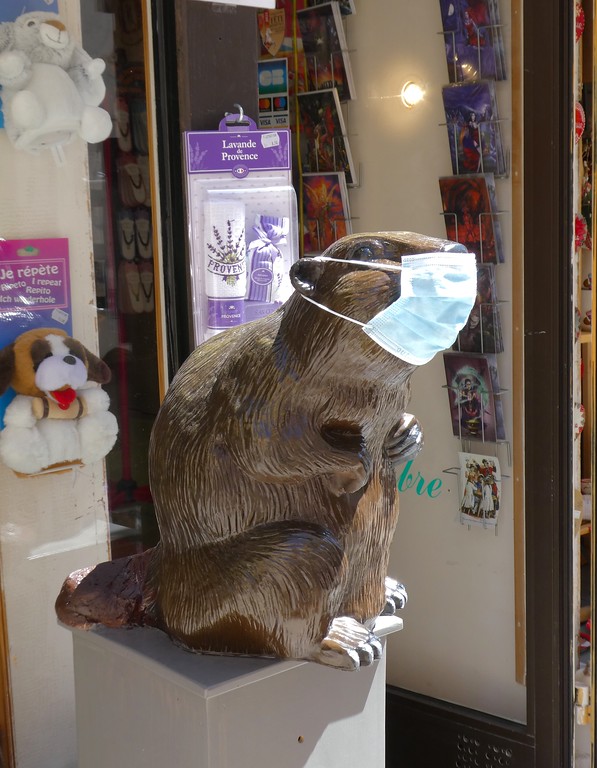 We popped into a couple of the shops to see what treasures lay inside. I was pleased that almost all of the shops we entered sold very unique items. Nothing that you’d find at the local mall in this town! We ended up buying a couple of little things, which we dropped off in our room before exploring further afield.

I dragged Dan up to the fortress at the center of town, “Fort du Château.” I was disappointed that the path didn’t really go anywhere, other than up to a couple of walls. I had assumed that the fortress would be open to the public but nope: just some grassy trails that gave a nice view over the town.

I loved the variety of rooftops

A little alleyway with supporting arches

Inside the Cathedral of Briançon

There were posters up for a concert at the church that evening at 8:30 and I thought it might be fun to come back out to listen to it. I had it in my head that it would be a symphony orchestra, or something like it. Dan didn’t seem so keen about it, so I tucked it away to decide later. We had more streets to explore. 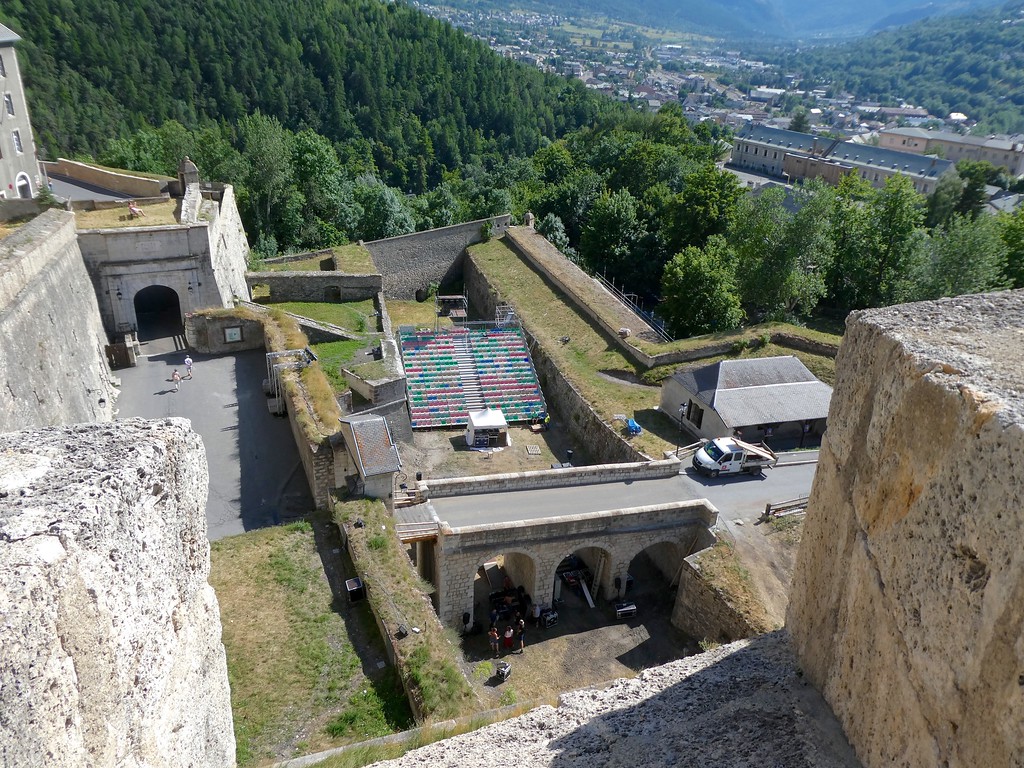 That evening we decided to eat at the hotel’s own restaurant and it was a good choice. Our food was tasty and the service was great. We even had dessert.

A rib-sticking risotto with mushroom 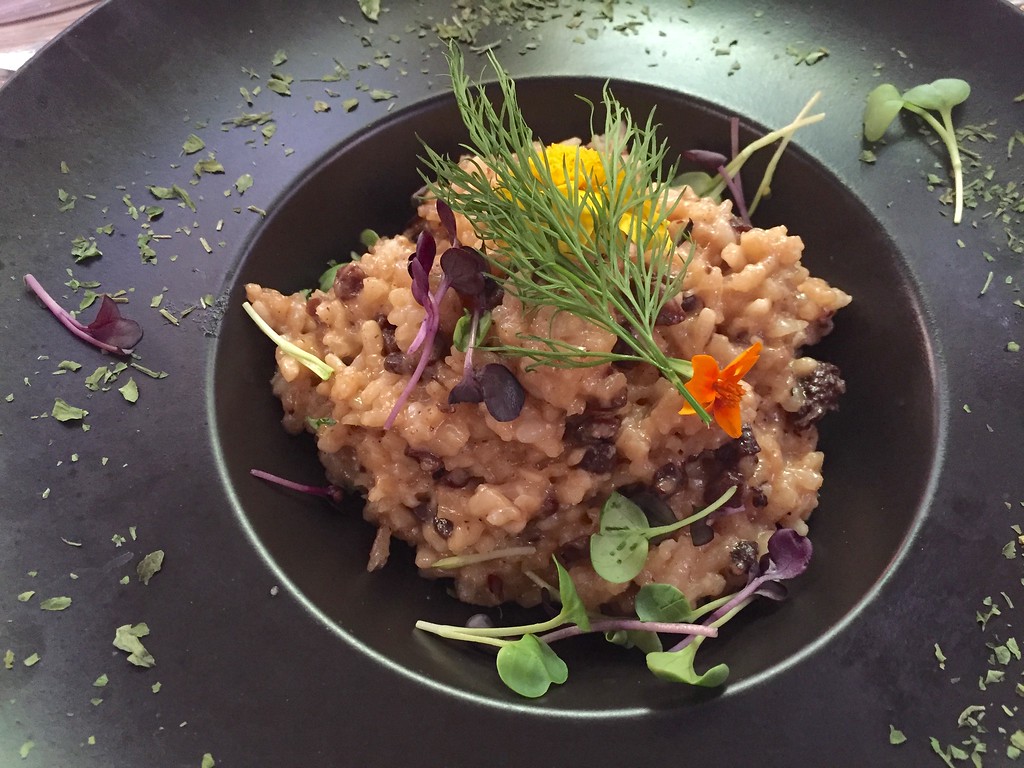 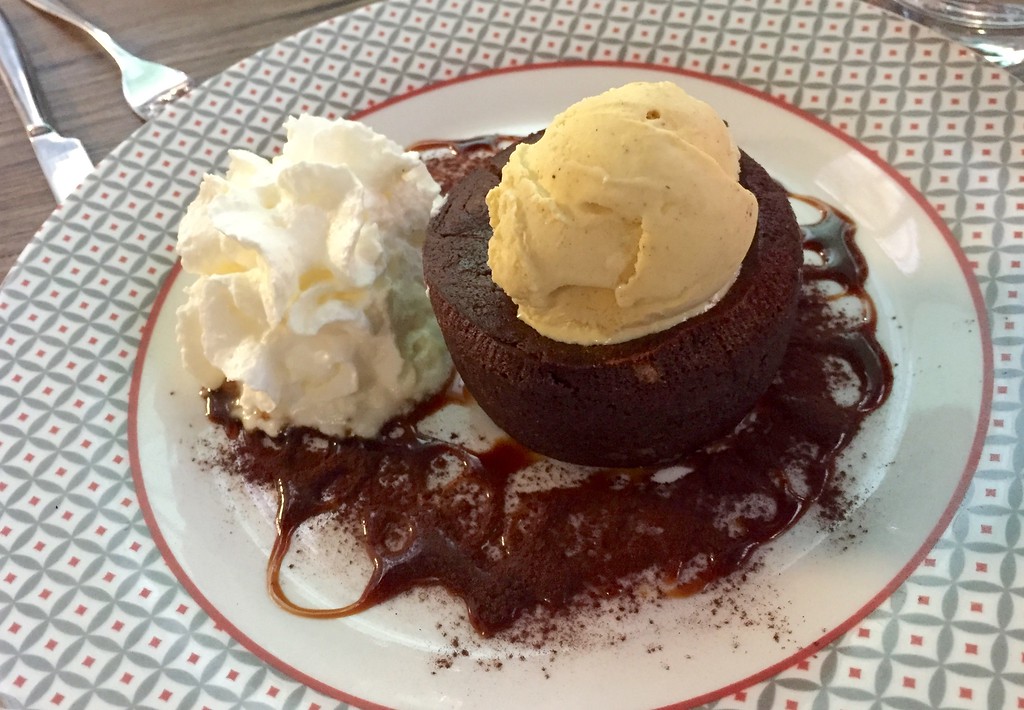 And then we walked around the town again, as there was still daylight to exploit and there were still streets to explore. 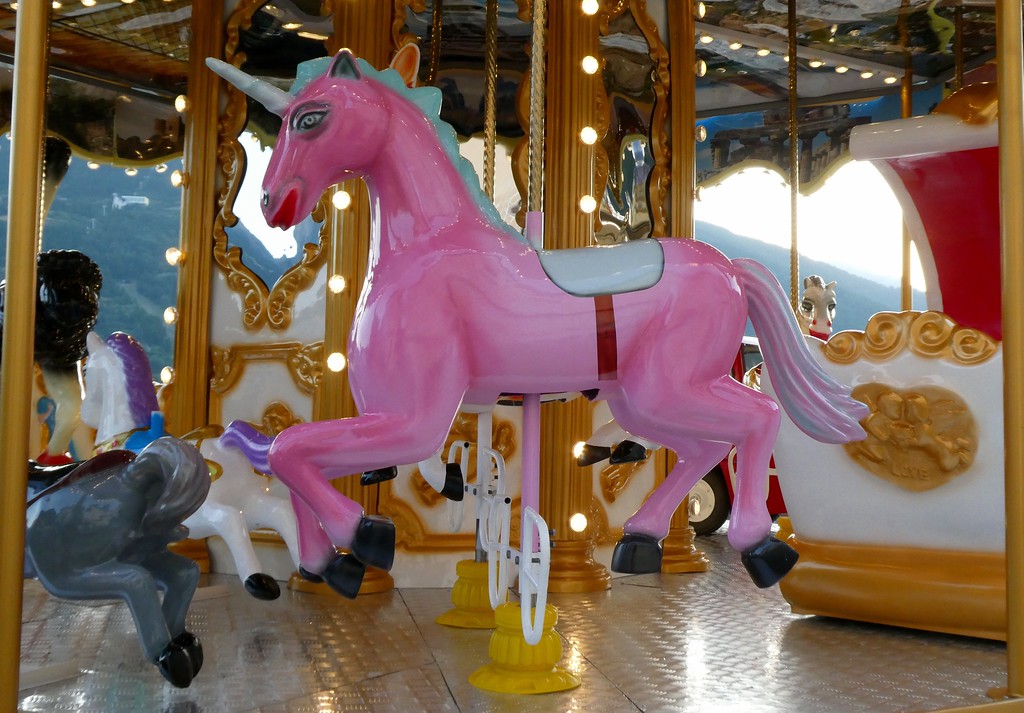 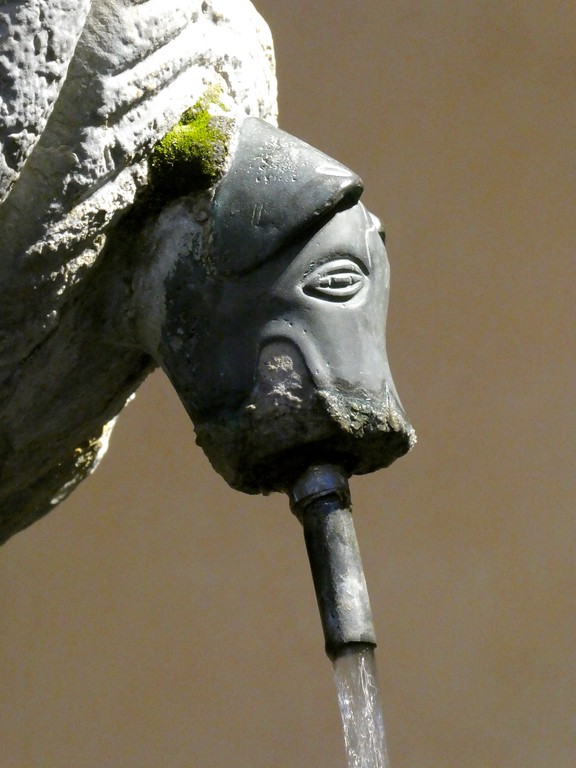 We retreated back to our room when the sun disappeared and found that we did not have to go back out for the concert: the musicians were outside and the sound carried quite well through our window. And it wasn’t classical music, but closer to “classic” music, with covers of 90s alternative rock bands like Sound Garden. It was pretty good and made for a nice background to our last night in France. 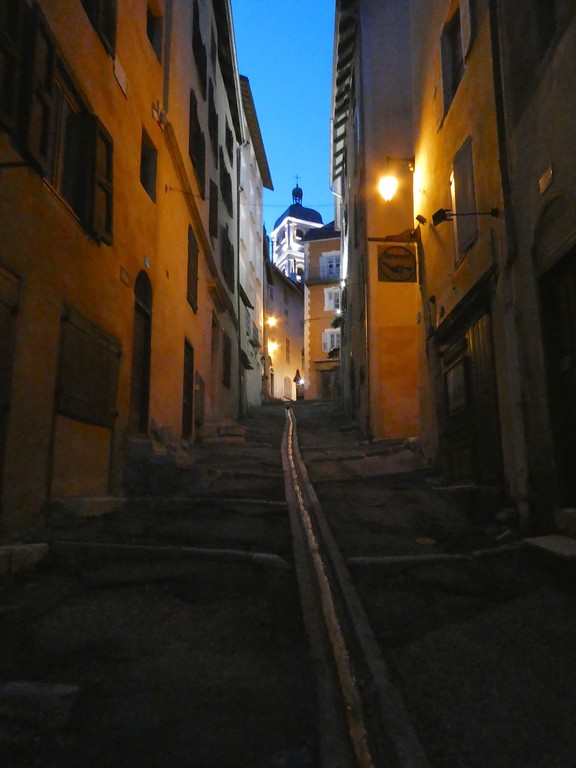