Breakfast was another buffet option and again I was instead thinking of the bounty that would have greeted us up on the mountains. I don’t know if it was the fresh air, or just being happy to be out of my sleeping bag, but I always looked forward to the breakfasts on the mountain. Here…it was just another meal.

Matt, Mick, Dan and I decided to take a quick tour of the town. We had to be back to the hotel by 10:00 so we had a couple of hours. I made the decision not to bring my camera with me. I knew that I would have time to explore the city tomorrow so I was not going to look at the town through a lens; I was going to be there, enjoying the moment.

I should have brought the camera.

The city was still waking up while we wandered the streets. Most shops were open, but some still had their shutters drawn. Cars navigated the streets, and I should note that, like England, they drive on the “wrong” side of the street. This hadn’t been an issue for us, since we had been driven everywhere so far, but now that we were walking around it became important to check for traffic in the appropriate direction.

The painful squeal of a loudspeaker broke the silence. We turned the corner and could see within the playground walls there was a large group of students standing around a make-shift stage. They were about to start a singing/dancing production of some sort and the AV guys (Audio/Visual, for those who forgot their high school lingo) were having issues with the sound system. A loud “pop!” emitted from the speakers and soon another loudspeaker unit was rolled in from somewhere else. The performers on the stage were young – maybe eight years old. They were wearing brilliant, festive clothing and sang and danced to traditional-sounding music. In the background, two women patiently held up a banner that read “Long live the King!”. Interestingly enough, a couple of the buildings surrounding the yard had positive slogans about behaviour and hygiene – and all of them in English. How on earth did this tiny country of 700,000 people, landlocked by non-English speaking countries, have such a great knowledge of English? Because of a decision in 1962, the government decided to adopt western style education, with English as the medium of instruction in all schools. This showed incredible foresight by the government in recognizing that a small country that wants to open itself up to foreign trade and travel needs to be able to communicate to a wide audience. With the English language having spread to every corner of the world, they could not have made a better choice. It also made my holiday much easier to navigate.

We cut our meanderings short when ten o’clock drew near. We were to all meet at the front of the hotel, bags in hand, and catch the bus to meet the latent four hikers. What I didn’t realize is that we would all be making the drive back up the mountain to get them, before going to the hotel. It seemed to make more sense to send the bus for them, and then pick up the bulk of the trekkers and go directly to the new hotel.

Back at the hiking trail, the four were waiting for us in a rain that was slightly heavier than when we had finished the hike. The horses were coming, but not yet there, so we had to wait around for a while until they made their way out of the trees and into the dirt yard. The porters were quick to unload each animal as it drew near and then let it wander off to enjoy the grassy riverbanks. It was organized chaos.

(Dan’s) The calm before the storm 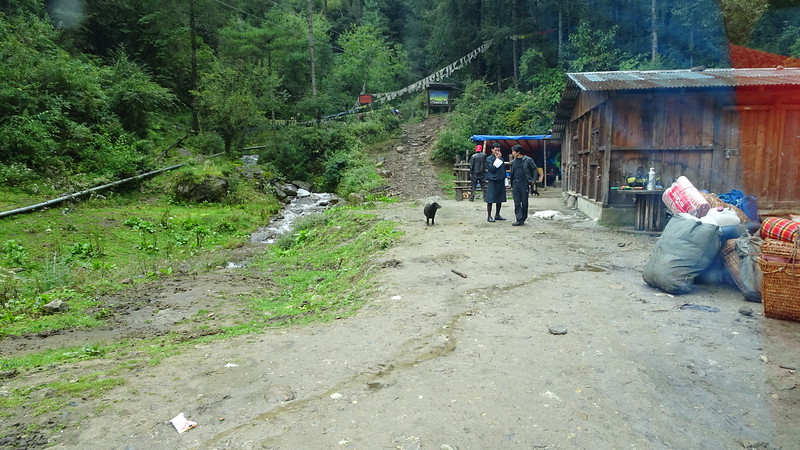 When everything had been unpacked and our black bags (yay!) were loaded on the top of the bus, we all got together for a group photo. The porters and chef had all been fantastic during our hike. They always had a cheerful smile for us, and tried to accommodate our requests (as evidenced by the campfire, pack horses and outhouse requests).

Oddly enough, the road we were on dead-ended – at the king’s palace! I had noticed the gate the previous day, but today there was a guard standing outside in the rain. I’ve seen housing division neighborhoods with more elaborate gates… 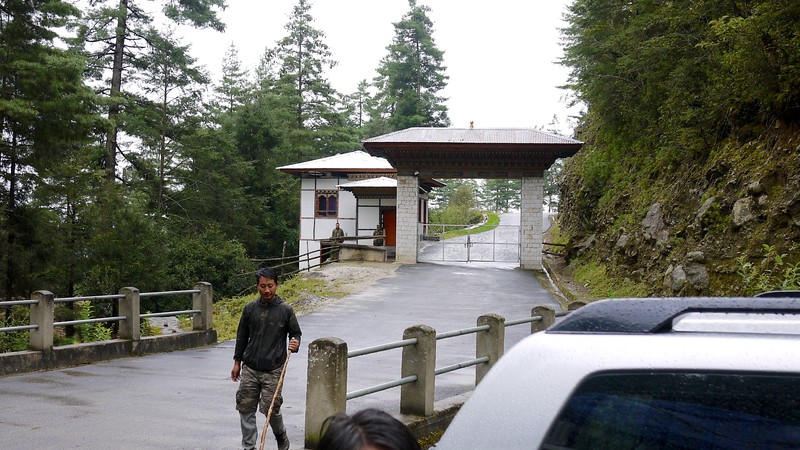 Cleaning up the gutters and edges

With a bus full of trekkers and luggage, we headed back down the mountain and to our new hotel. I wondered where it would be in relation to the previous night’s hotel and what was nearby. It wasn’t long before we found out: it was the Namgay Heritage Hotel. It looked fancy! 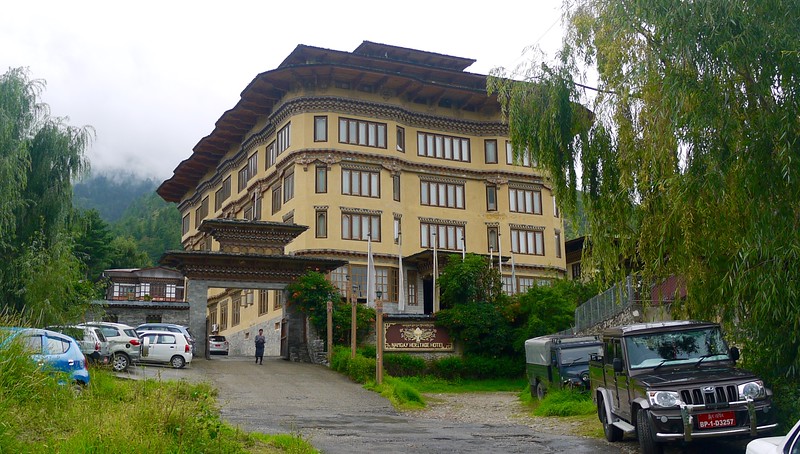 Detail over the front door 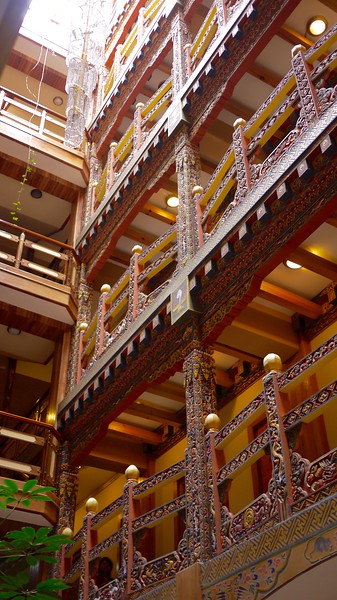 View of the atrium from the second floor 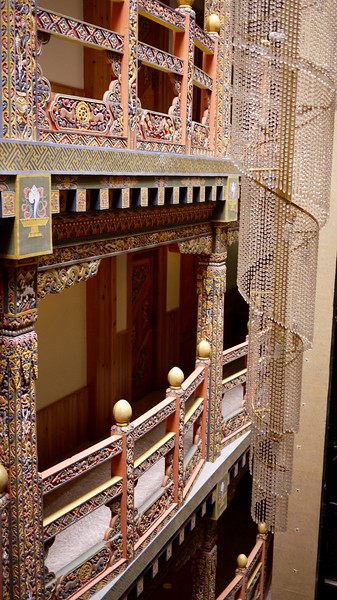 I saw Sarah and Petra’s room before I saw mine. It was impressive – and huge! The door lead directly to a sitting area, with a massive bedroom and bathroom off to the side. Damn! This was a nice place! And then I saw our room. Ok, so not all of the rooms were that nice. Our room was tiny. It was not the smallest room I’ve ever had, but in comparison I felt a little cheated. Still, it was clean and comfortable and the hot water worked well. That’s really all one needs, after all.

How it looked before our bags exploded, covering every surface with damp clothing 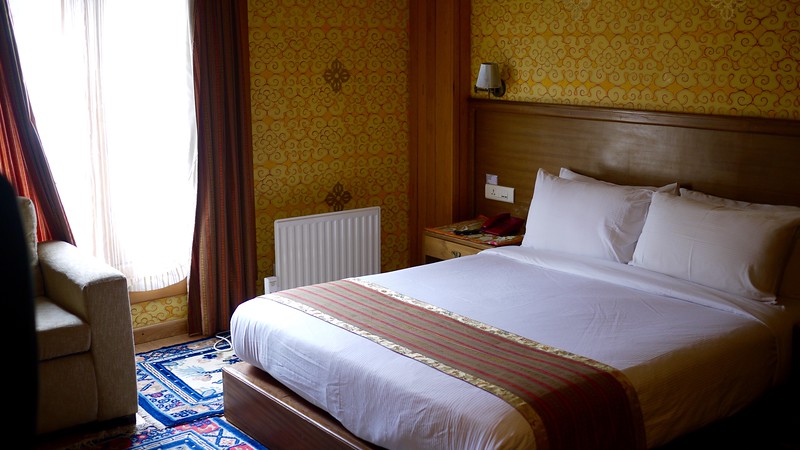 We had an hour or so to settle in before we walked to a local restaurant for lunch. It seemed like a long time to just hang out so I explored around the grounds a bit to see what else the hotel had to offer. The most interesting thing I found was a pool and sauna, which might come in handy later.

More bamboo scaffolding on the building next door

After another buffet lunch (with rice! and tea!) we were set free to meander Thimphu at our leisure. If we had stuck to the original schedule, this would have been our first time in the city and it would have been all new to us. We had already explored a lot this morning and now that we were based on the other side of town, we had more to explore.

Back to the market stalls that had been closed this morning 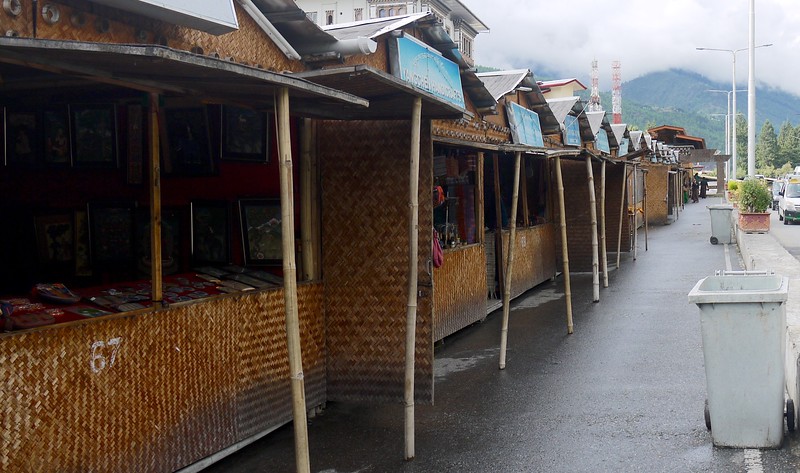 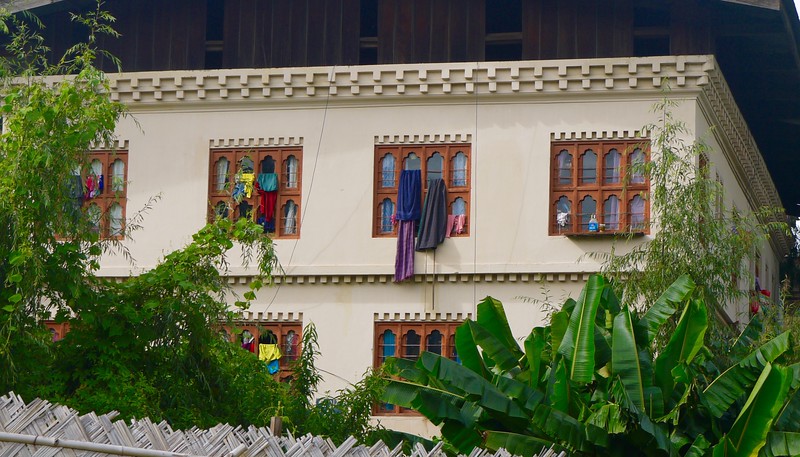 Gas station – the price was in Indian Rupees 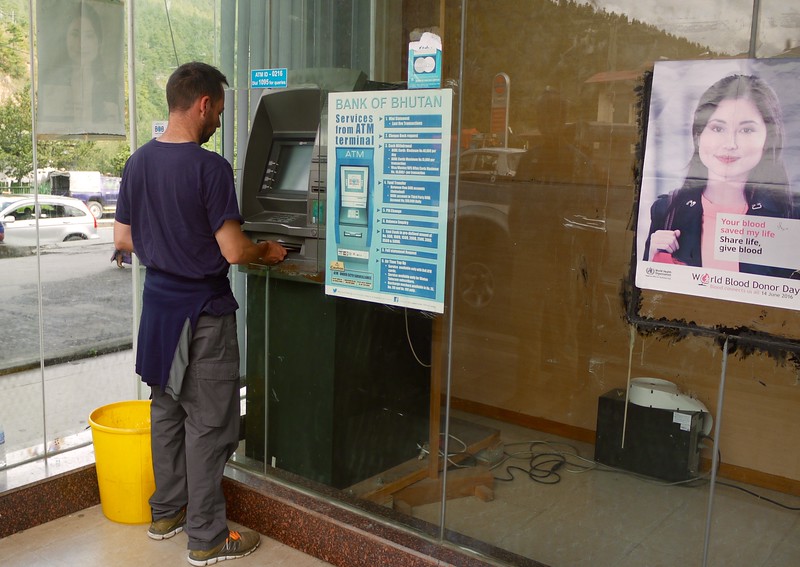 I love the figure on the Pedestrian Crossing sign

We retraced some of our steps from this morning but things had changed. The kids were no longer singing in the playground, the dance rehearsal at the clock tower (“Times Square”) was over and the stores were all open for business. I still wish that I had had my camera this morning.

Foreshadowing – what’s that on the hill? 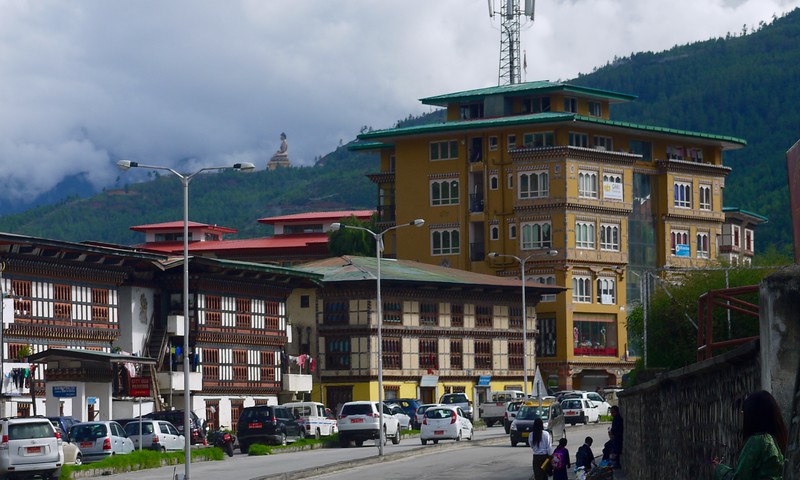 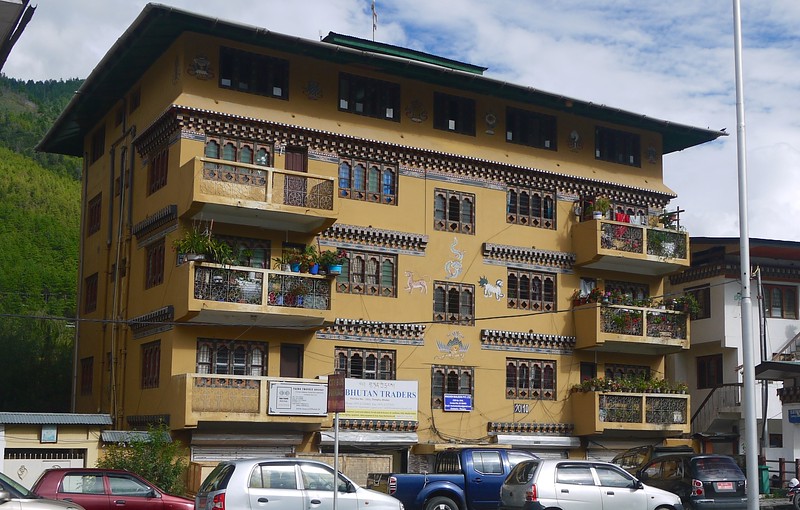 A building with rare modern touches 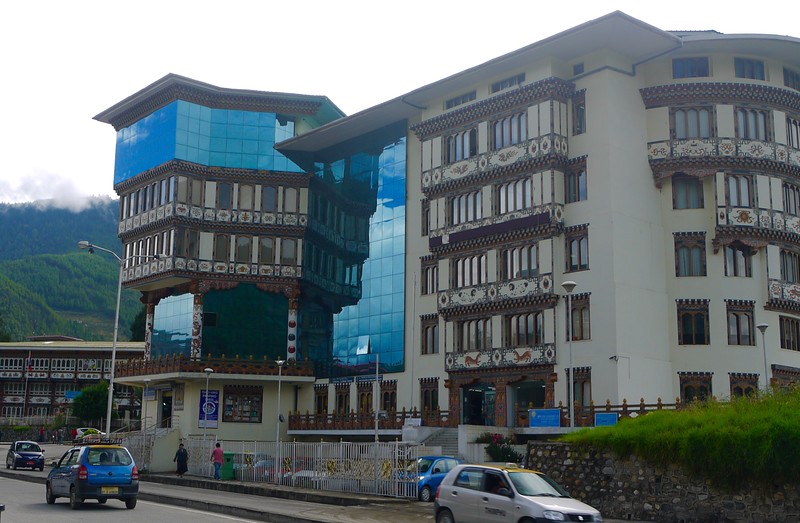 Old construction next to new

Construction in Bhutan is regulated as to what can be built and how it should look. All new buildings should conform to guidelines including that they must all be constructed with multi-coloured wood frontages, small arched windows, and sloping roofs, and the height is restricted to six storeys. For those who want to know more, I stumbled across this blog which is from a woman visiting and working Bhutan for a year, and her views on the architectural styles.

Before leaving for Bhutan I had read that dogs were everywhere, and was even cautioned to bring ear plugs, as they could be noisy at night. Most of the dogs I saw appeared relatively healthy, partly due to a recent program sponsored by the government. Once a year, every dog that can be rounded up is taken in for sterilization and vaccination and then, with a small ear notch to indicate that it has been “processed”, it is released back onto the streets. The program is less than ten years old but the effects are already being noticed. Here’s is another link for a more detailed description of how the program came into being and how it was carried out. The dogs themselves were never a problem during my visit. Some were friendly, but most were skittish when approached. Unless you had food – they knew that humans were often a source of food. The dogs in the mountains would follow us for hours at a time, waiting for us to stop for lunch and then cleaning up anything that we left behind.

Showing off a notched ear

Someone has a home 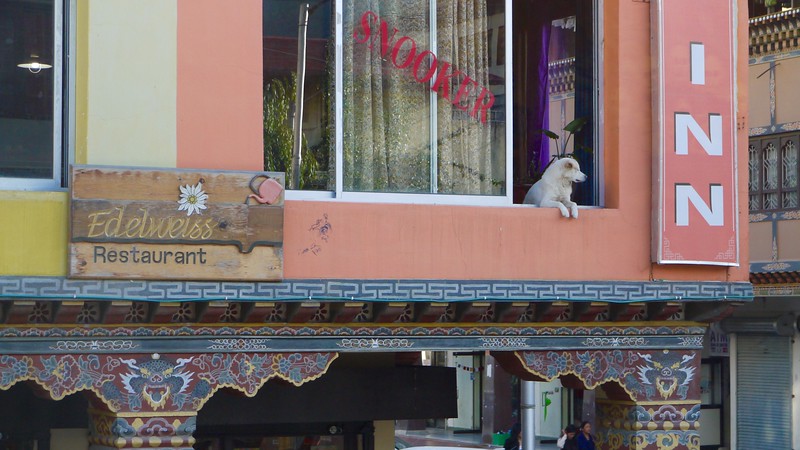 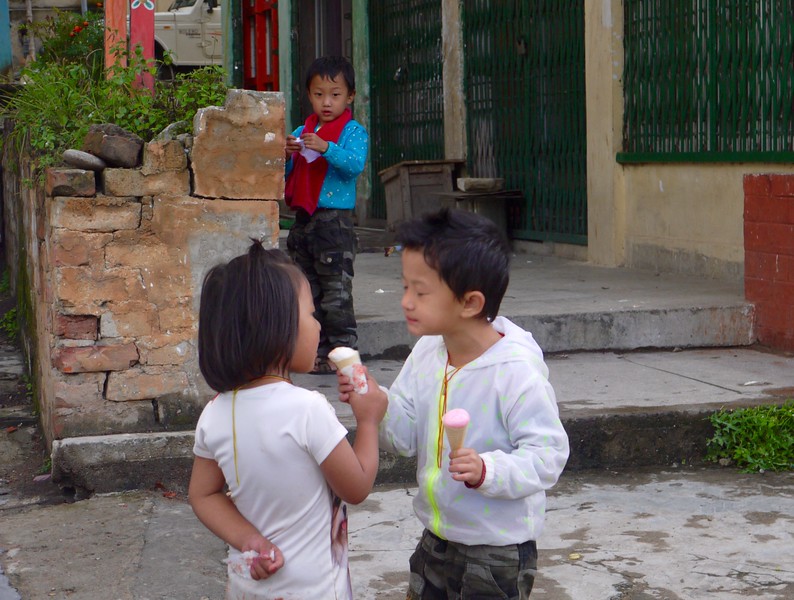 Thimphu (Wiki link) is the capital of Bhutan with a population of just under 100,000 people. It is the agricultural and livestock seat of the country, as well as containing most of the important political buildings in Bhutan. However, it is not served by an airport, relying instead on the small airport that we landed at in Paro, over thirty miles away. It is also one of only two capital cities in the world without traffic lights. As the Wiki article puts it so well: “Instead of traffic lights, the city takes pride in its traffic police that directs the oncoming traffic with their dance-like movement of their arms and hands.” And it really is like a dance. I stood on the corner, mesmerized by the smooth, flowing movements of the officer’s hands. I tried to understand how he gauged the oncoming traffic and determined who would go and when. He was really an artist. I should have taken a video.

And of course, he has to get to work somehow

Bamboo: apparently its reputation for strength is well-earned 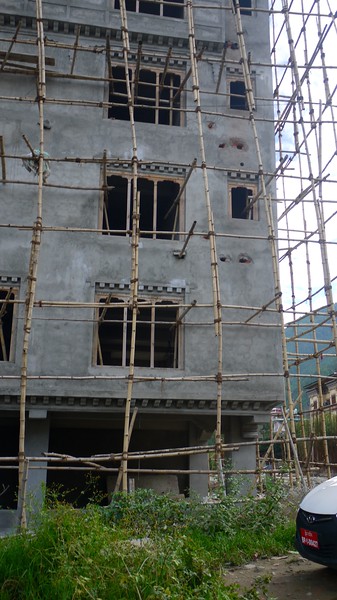 Dan and I decided to check out the pool and sauna, but I was a little disappointed. I can’t tell you exactly why I was disappointed, but I just didn’t feel relaxed in the pool. I think a part of me was hoping that more people from our group would come and I could chat with them. But it was just Dan, Mick and I, and Mick decided to swim some laps and I just bobbed in the too-shallow water. The sauna was nice, but as I generally don’t like heat and humidity, I could only sit inside for a short period of time before giving up and going back to my room.

Dinner was at our new restaurant but there was no structure to it. It was a buffet open to anyone staying at the Namgay, and available for a couple of hours. A few of us trickled in to our reserved table, but we were the first ones to take our seats. Shortly after I sat down with a full plate from the buffet, others from our group came into the dining room, eventually filling up our table for our evening meal.

Tomorrow we would leave our hotel and eventually leave Thimphu. We had to have all of our bags packed in the morning and after loading up the bus, we’d do some sightseeing in Thimphu and then drive back to the Metta Hotel in Paro. It sounded like a busy day!