It was only fifty kilometers to Paro but because of the twisting roads and non-direct route, it would take us almost an hour and a half to make the journey. At first the road swept past some smaller built-up areas, obviously the outskirts of the capital city. Vendors set up at wide spots in the road, usually with a temporary canopy of colorful fabrics. Smoke rising from fires indicated that hot food could be purchased there and from the number of people I saw pulling on and off of the road, I could see that it was a popular option.

At the edge of Thumphu

The view out the front of the bus; we were about to pass

Even though I had just hiked through Bhutan for five days, I was surprised at how green it was. The road hugged the side of the valley wall, never quite dropping down to the river below until we crossed from the Thimphu district into the Paro district.

The road to Paro

Livestock on the road

Someday, I would like to be on a motorcycle on this road

Dawa (from our lunch stop) said that the roads in Bhutan had recently improved and were great for riding on. I could see from today’s drive that the roads were in very good shape – as long as they were not being worked on. But when roadworks were happening, safety went out the window. There was no signage to warn of upcoming workers, machinery or lane blockage; and there was plenty of all of the above. Obviously I was fascinated by it, considering how many photos I took. Most of the workers and laborers in Bhutan come from India, drawn by the work and the higher wages. Ever since the first international road was built in 1965 – to India – the two countries’ economies were tied together. Indians came to Bhutan to work, and Bhutanese traveled to India for consumer goods. It was a partnership that seemed to work well. Or at least, well enough.

Another truck parked on the road

Oh look! A warning sign – in the middles of the work site 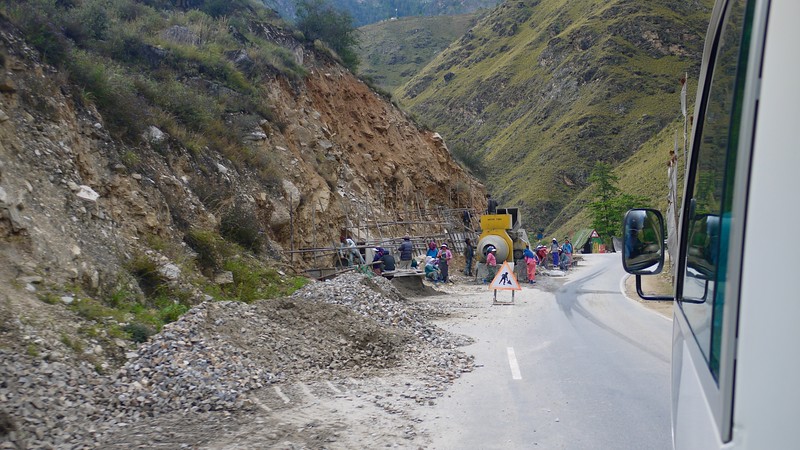 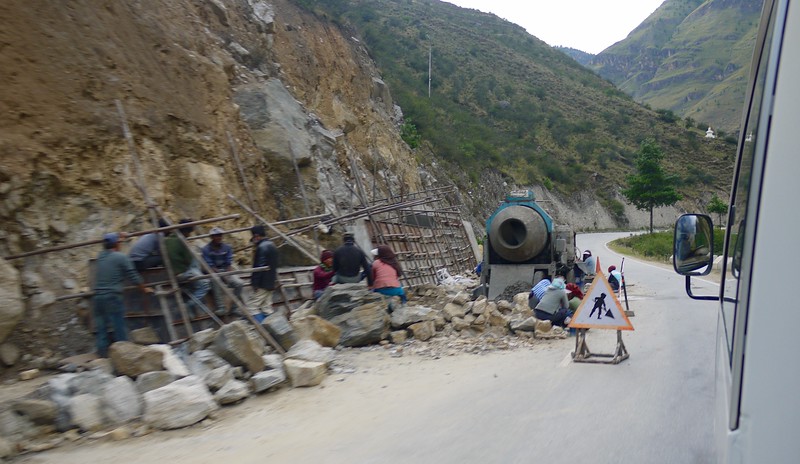 The new retaining wall, with some clean up still left to do

We were finally getting close to Paro. although no signs indicated as such. The landscape had changed slightly, with more golden rice paddies crowding against the river. I was taking note of the government-sponsored safety signs that lined the roads. They were amusing, educational and sometimes just strange. 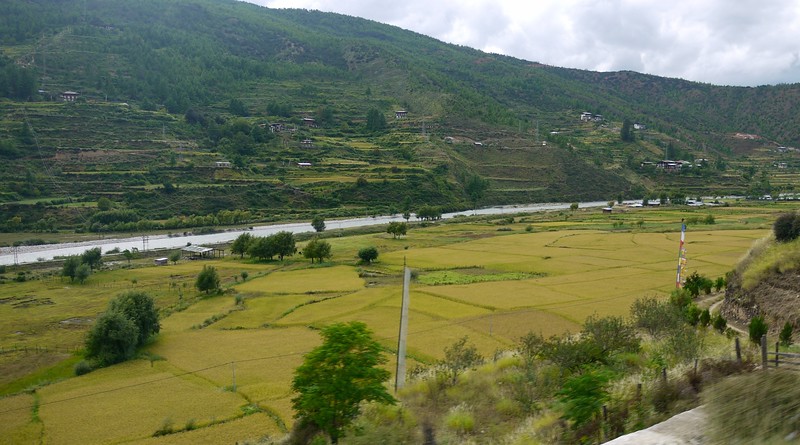 Like I said earlier, I had been taking notes of the signs posted along the sides of the road. I wrote down a few of them, since the variety was so great and some of them were so clever. Here is a collection of the ones that caught my attention:

The driver slowly made his way through this herd 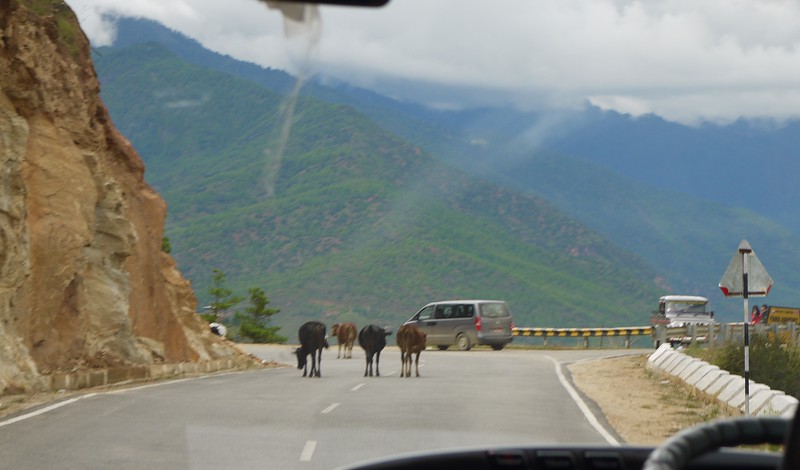 Our bags were unloaded from the bus when we reached the Metta Hotel in Paro. We had a new room, far from everyone else, and once again unpacked our bags. I was still trying to dry out some of our clothes and, of course, our boots were still a soggy mess. We had some time before dinner and so we hung out in the room and turned on the TV. The Hunt for Red October (always a great movie!) was on so we let it play in the background as we managed our belongings. I watched the movie closely enough to noticed that every time someone was shown smoking on screen, screen text had been added that stated “Smoking Kills”.

I hadn’t seen any cigarettes during my stay in Bhutan. I hadn’t missed them at all, as I generally dislike the smell of the smoke and the litter of the butts. I don’t know if there is a word for it, but I guess I hadn’t notice the missing cigarettes because I never liked them to begin with: the world was as it should be. Chunjur had explained the absence of smoking was due to a long history of intolerance to tobacco. Even as far back as 1916, it was referred to as a “most filthy and noxious herb…” by the first king of Bhutan. In 2010, there was a government ban on them, but this ban was relaxed in 2012, allowing for some importation but under strict restrictions and high taxation.

Tonight after dinner the group would be treated on our last night in Bhutan to a series of native dances and songs. Excellent! Even though Bhutan is a young country, they still have a lot of traditional songs and dances. Tonight we would be given a chance to see and hear some of them in the comfortable setting of the hotel’s courtyard, with a crackling fire to give us light.

Unfortunately, I don’t know how to take good night photos with my camera. Fortunately, someone else in our group was competent with his camera and shared his pictures with me. Photo credit goes to Neil Henderson where indicated. Thanks, Neil!

A song performed early in the festivities 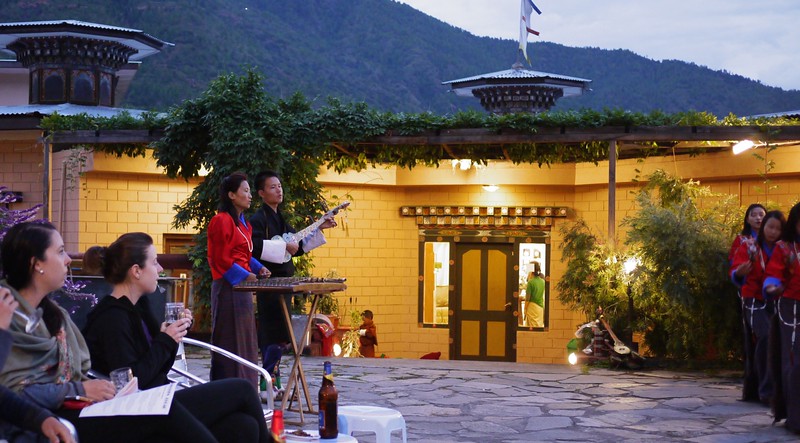 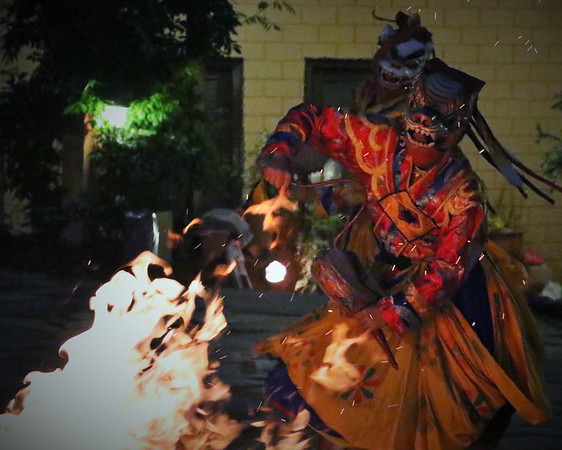 The dancing was great, with fantastic costumes and music. One of my favorite dances celebrated the Yak, and included a Yak costume that was manned by two people inside the furry outfit. A great horned furry mask gave life to the animal as it danced around the fire, interacting with the yak herder to illustrate a story that described the intertwined lives of the two. Unfortunately, no photos exist of this dance during our display, but since the yak was so cute, I found the following photo on the internet.

With the dances over, our group drifted inside the lobby area to the karaoke machine. Some of the group had been eyeing this piece of entertainment since we had arrived over a week ago and it looked like tonight it would finally come to life. With the aid of some Bhutanese whiskey, beer and wine, the song list made its way around the room. Some of the more popular requests weren’t available, or catalogued in the book, but there were enough choices to keep us entertained. One of the highlights of the night (for me, at least) was the performance of Bohemian Rhapsody. After our performance around the campfire on our second night on the Druk Path, it seemed like a fun idea to sing it again – this time with the words. For most of the songs so far there had been a cheesy video to go along with it, but for Bohemian Rhapsody the video was just…weird. It was a very dark video, with a young boy and Barbie dolls and other disturbing images that I fortunately cannot recall.

Bohemian Rhapsody on the karaoke machine!

Can you have karaoke without YMCA?

It was midnight when we finally unplugged the machine and returned to our rooms. Most of us said our “Good byes” before turning in, as we were leaving on a staggered schedule, just as we had done with our arrival. Our flight was early tomorrow afternoon, with a few others. Dan and I went back to our room for one last night’s sleep in Bhutan.

The bus made the trip to the airport for the seven of us departing on the flight to Bangkok. Customs was a breeze and we exchanged our Bhutan Ngultrum for Thai Bhat, since we still had one more night in Bangkok. We sat together on the benches of the waiting area, chatting and getting ready for the flight. We had bonded well and it was going to be sad to break up the group.

Departing photos on the way to the airport 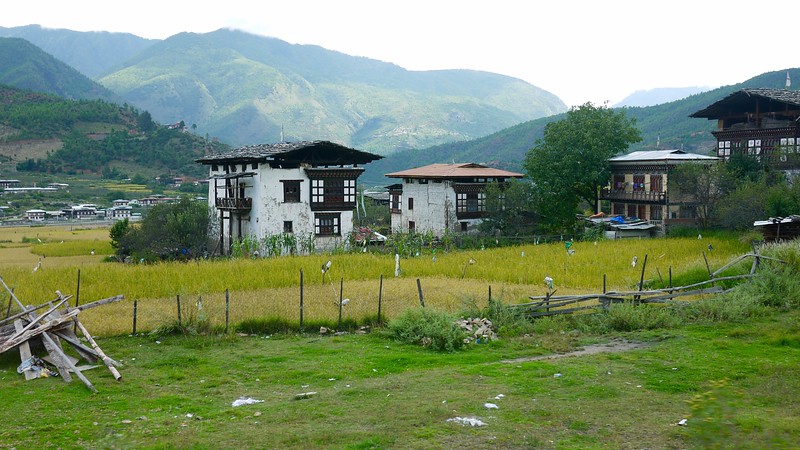 I’m leaving, on a jet plane 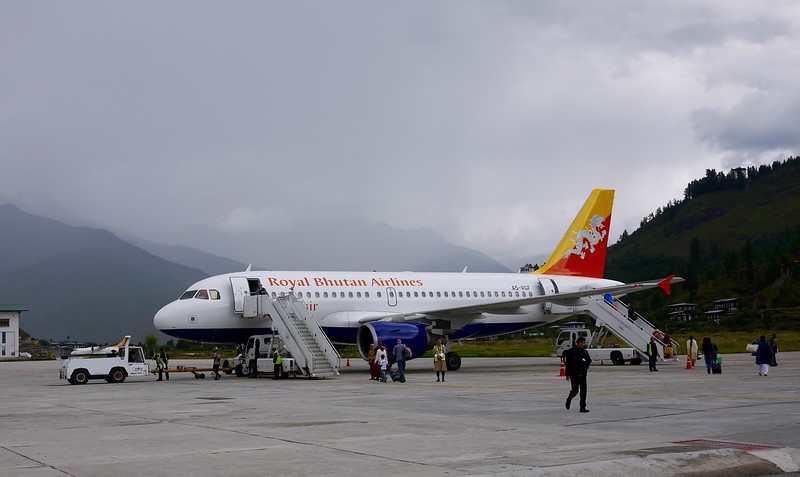 Our flight went quickly, primarily because I slept slept through most of it. I didn’t have a window seat so there wasn’t much else to do anyway. We landed in Bangkok and said good bye to our trekking friends. Perhaps some day we’d meet again on the trail. I sure hope so!

Our hotel was at the airport, but we didn’t realize just how close it was until we took the airport shuttle there. The van took longer to get to the hotel than it would have to take the pedestrian tunnel, but we didn’t know that at the time. The hotel (Novotel) was impressive in its size and grandeur. The lobby atrium was flanked by a variety of restaurants and shops, with plants making it feel like a lush outdoor setting (but with comfortable temperatures).

There wasn’t much left to our trip. We had dinner at the Thai restaurant in the lobby, a solid night’s sleep in a comfortable bed and then a leisurely morning to pack up our bags. By now I had sorted out our belongings into two suitcases that needn’t be opened again until we were home, and our two backpacks that just had the essentials for the remainder of the trip.

The flight home from Bangkok was uneventful. I had bought a book to read, but found myself watching movie after movie after movie. Three movies, in all, and a bit of napping in between whiled away the twelve hours until we touched down in Zurich.

Once home, the cats were thrilled to see us (because we all know how well cats express their emotions) and we unleashed the contents of our bags. There would be a lot of laundry to do, but for now it just felt good to be home.