Technical Information is based on Dan’s watch. Below is the link to today’s trip information.
Pre-Lunch

It was cold. I pulled the sleeping bag up closer around my head but it was no use: the cold just seeped through the bag itself. I had bought this particular bag years before and honestly didn’t know what it was rated for, but it was a good brand and downfilled and I never considered that it might not be warm enough. Even having a silk liner wasn’t enough. Dan, on the other hand, woke up complaining that he was too warm. He got up first and took some nice pictures of the sunrise. I got up a little later, hoping that by getting dressed and moving around I would warm up. A little sunshine would help, too. It was nice to put on my boots, knowing that my feet were still feeling good even after the hiking done so far. No hot spots, no blisters, no aches or pains. It was like I had hooves!

(Dan’s) Sunrise in the mountains 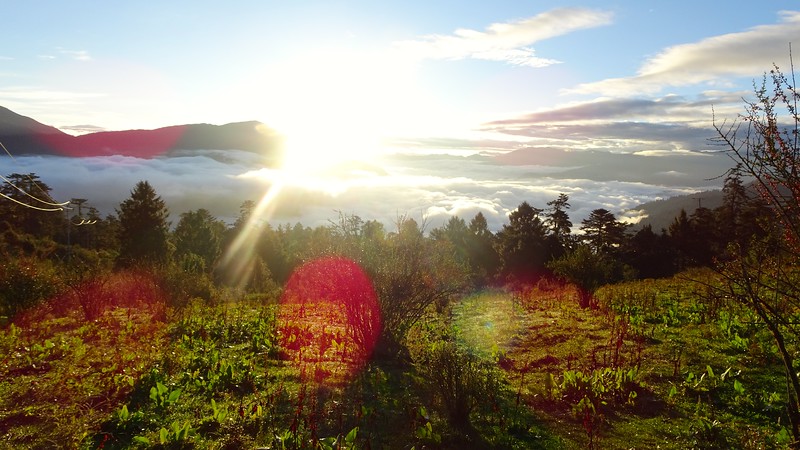 The day officially started at 7:00, when a couple of the porters went from tent to tent offering up a morning tea or coffee. At 7:30 we were expected in the dining tent for breakfast, our black bags all packed up and ready to go. While we ate, the porters would begin to dismantle the tents. The pack animals had been left to graze freely all night, wandering where they wanted and sometimes leaving “presents” in front of the tents. Now the porters ranged across the landscape to bring them together for another day’s work.

Because the sun was actually showing itself this morning, the dining tent had been taken down early and we ate outside. This meant that some of the other critters responsible for the piles of fertilizer in our campsite were free to join us at the table.

Andy has an admirer 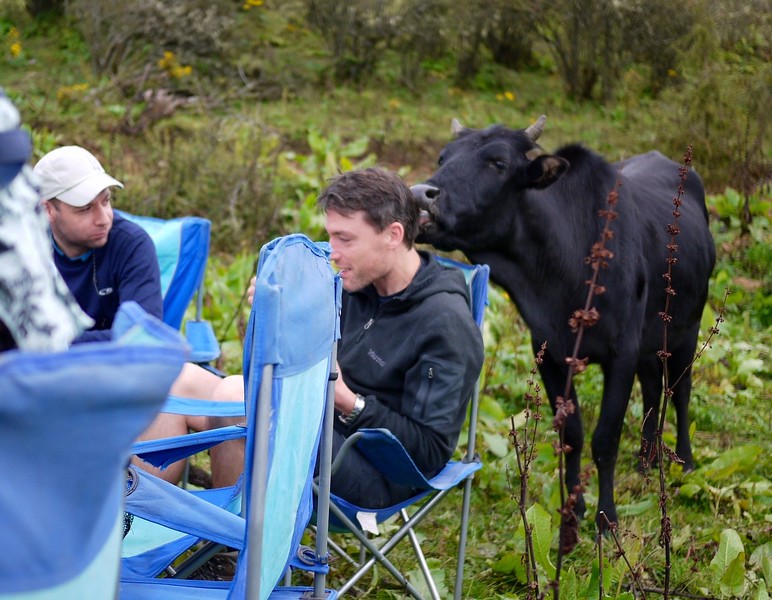 Cleaning up after breakfast 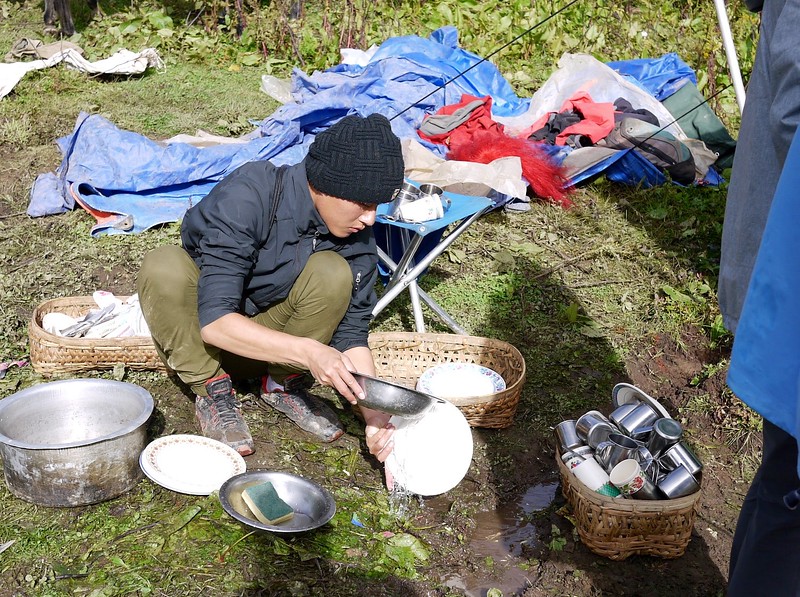 Our first order of business was to hike to the temple at the top of the hill. It didn’t look like much from our angle (both the building and the climb), but the climb up the hill was enough to wake me up. It didn’t take us long to get there and the view over the other side of the ridge made it worthwhile.

The temple on the hill 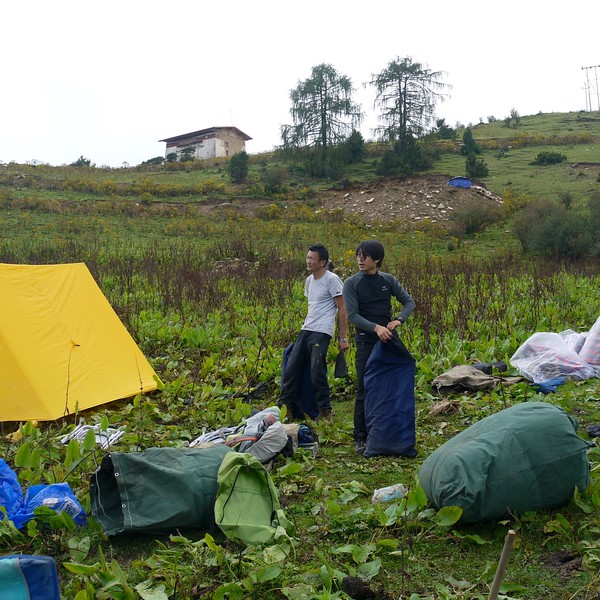 The morning’s view down to Paro, from the other side of the ridge 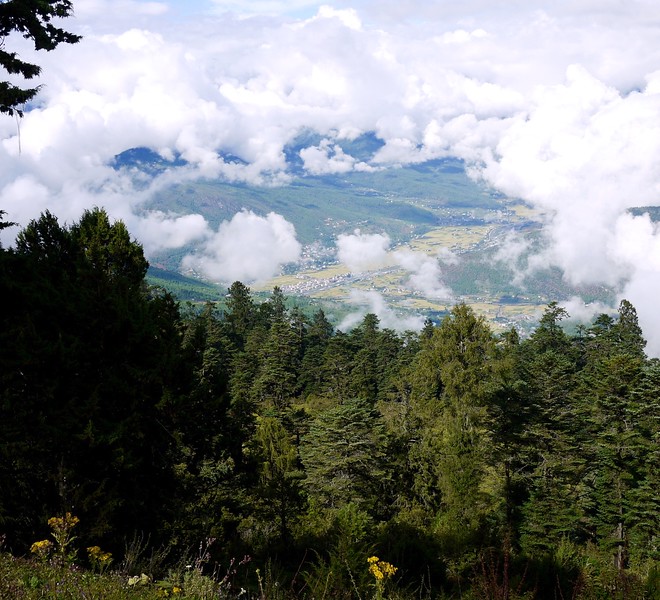 A young monk greeted us and invited us inside. Shoes and cameras waited outside as we once again were treated to stories of Buddhism and and fantastic legends. This particular monastery was thick with burning incense – too thick for many of us. As Chunjur answered a few specific questions, a few of us made our way back outside into the fresh air. Ahhh…it was a beautiful day for a hike!

(Dan’s) Poles and packs wait for our return

We re-entered the forest, but it was a vastly different forest than the day before. This was much drier and more open. The trail wasn’t too steep at this point and I was happily taking in the scenery. Not that there was a lot to see: it was still cloudy in the valley and distances were limited. Still a wonderful morning, though.

The white horse that had been carrying our lunch so far was still nursing her foal, and he gamboled along at her side. As I watched him I noticed that he was favoring his right fore foot. I mentioned it to the porters and they said that yes, they had noticed this as well. They said something else that I didn’t fully understand, but I got the impression that they were keeping an eye on him. The limp got worse by the end of the day and I was pleased to see that on Day 3 of the hike (spoiler alert!) the pair were no longer part of our pack train, as they had been sent home to rest.

Following lunch as it is carried down the trail

Periodically Chunjur would stop the group and point out something of interest in the forest. The variety was astounding and included plants such as edible mushrooms, wild ginger, wild parsley and the problem with rhododendron pollen in the spring. He invited us to taste some of the wild foods as he pulled them out of the earth. It took me days to finally get the rhododendron story from Dan (it was originally told while I was still making my way down the path) only to find out that it was really a simple tale: In the spring the amount of pollen on the rhododendron flowers is so thick, that if a someone (or something, like a horse) brushes up against them, the air becomes a thick cloud of pollen. It is dangerous to walk through this cloud, as the pollen can get into your lungs, absorb moisture and exacerbate the effects of altitude sickness.

Wild ginger was being tasted in this scene 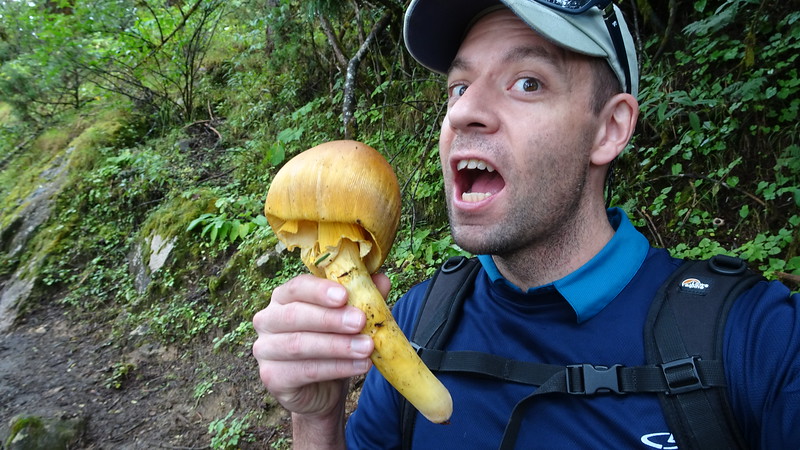 Two more mushrooms – still where I found them

The clouds were moving fast and they filled the valley and spilled up over the ridge that we were hiking. Trees poked through the mist and the trail suddenly increased its elevation gain, while I gradually made my way to the back of the group. I was amazed that the pack horses, fully laden as they were, could make it up some of the steep and rocky sections of the trail. But there they were: always behind us and ready to keep going.

A view of the valley 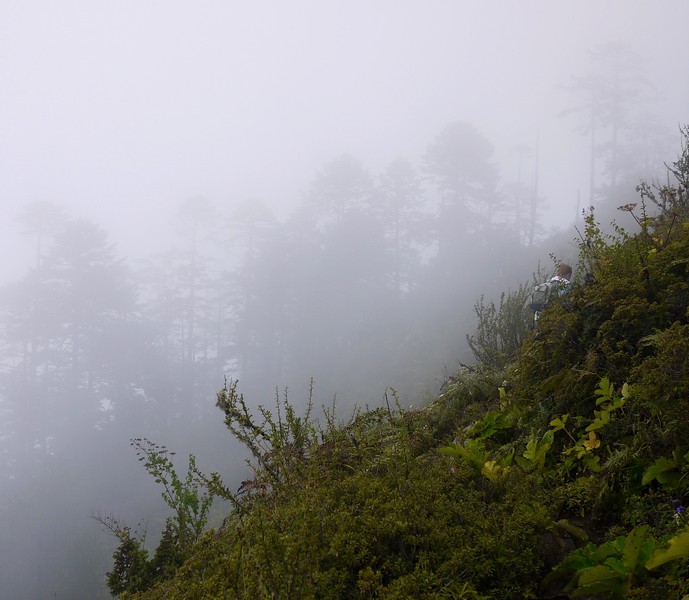 The clouds were moving quickly, and the trail was crossing over from one side of a ridge to the other. The views changed as often as the elevation, so I was always taking some photos.

Crossing over to the other side of the ridge 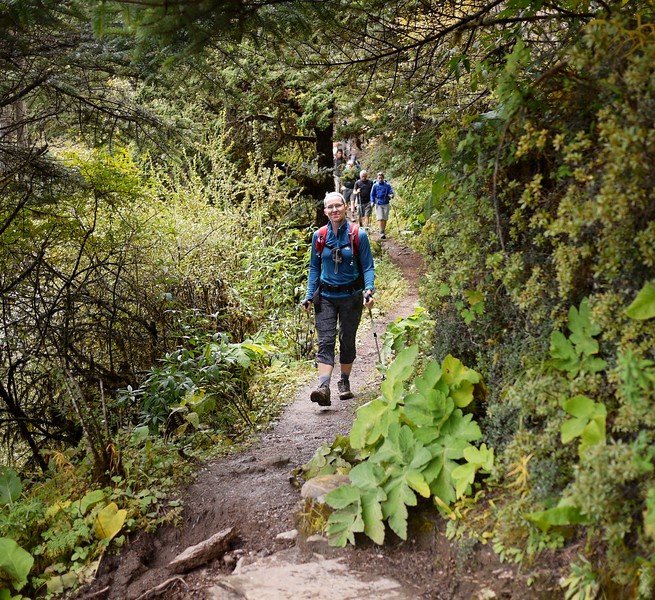 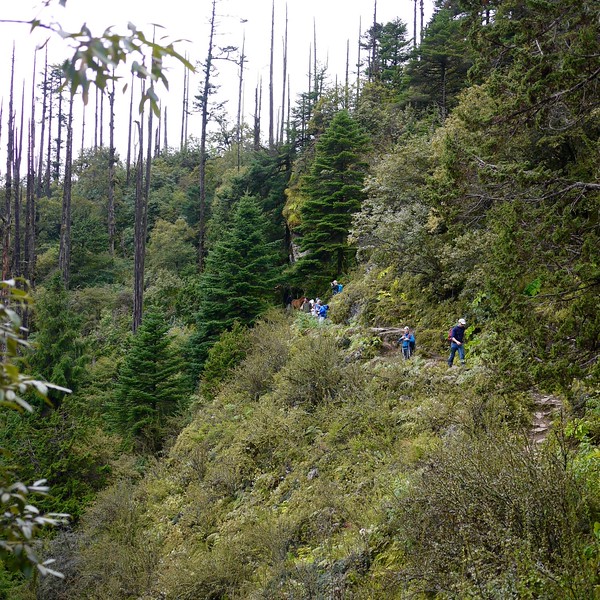 Cliffs in the distance 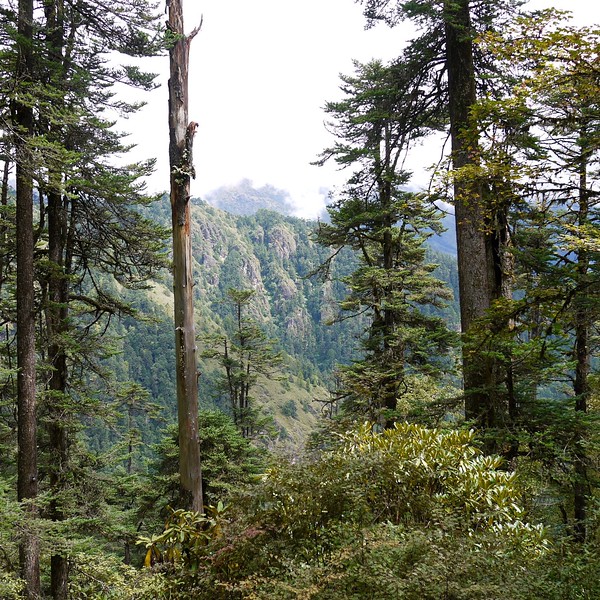 The problem with being at the back of the line was lunch. No, not that I would be late for lunch, but rather, I was making lunch late. The white horse and her foal were always behind me (or “us”, in this case, as Samantha and I were at the back of the group). The porter and his assistant were instructed to bring up the rear and were not to pass us. The problem was not that they would not pass us, but they gave us no space when we stopped. As soon as Samantha and I took a break (or anyone who was “last in line”, for that matter), they were right there. The horse’s head once bumped my leg and one of the guys ran into Samantha’s backpack. They were smiling and friendly and obviously did not realize that it was a personal space issue for us. It just meant that we did our best not to stop as often as we wanted.

The packhorses didn’t wait for us this time

This poor mule has gas

Yes, I felt guilty as I watched them go by

Lunch was in an open, flower-filled meadow. The lunch horse had passed us a little while ago (we can only hold up lunch so long, after all) and the baskets were already spread out and the tea was being served. It was a pleasant location and it felt good to sit down and relax. 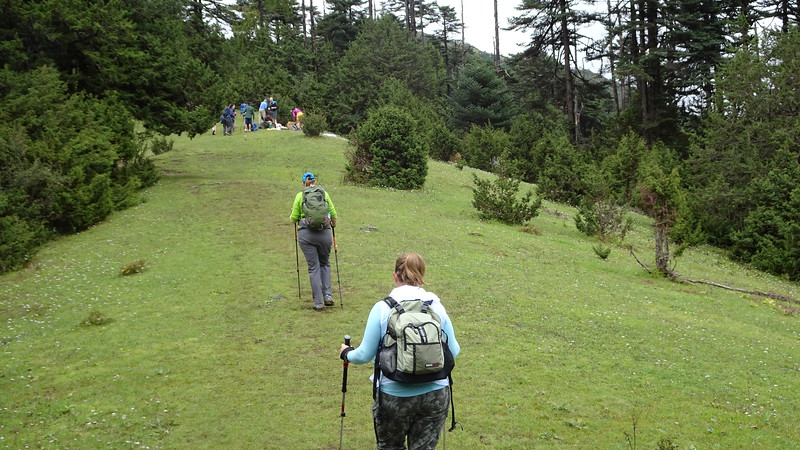 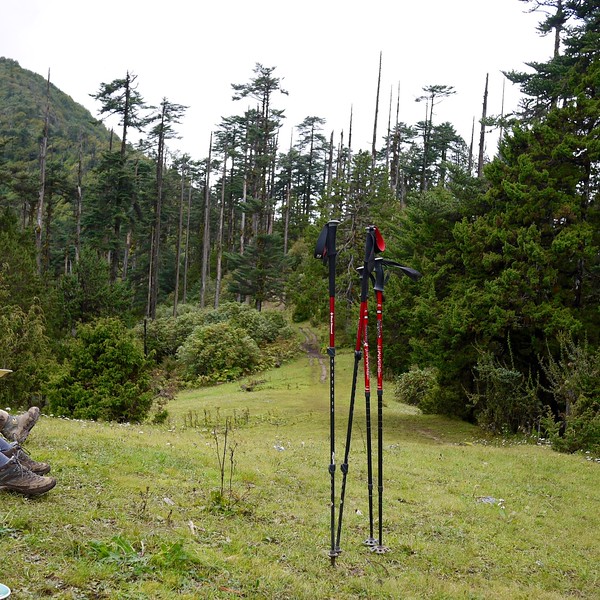 The food was once again filling and good. As we sat on the grass a couple of horses appeared from the forest. They were followed by a solo trekker and his guide, whom we had passed just a few minutes ago as he ate his own lunch. Once again I was reminded that we were not alone in the mountains, and imagined what the trail could be like if Bhutan did not limit the number of tourists at any given time.

Oddly enough, our campsite was less than an hour from lunch. I wished that we had stopped earlier in the day in order to split up the hiking a little more evenly. And it was a big surprise when we were in camp in the early afternoon – what would we do for the rest of the afternoon? At least it wasn’t raining, but it was cool and the ground was damp. 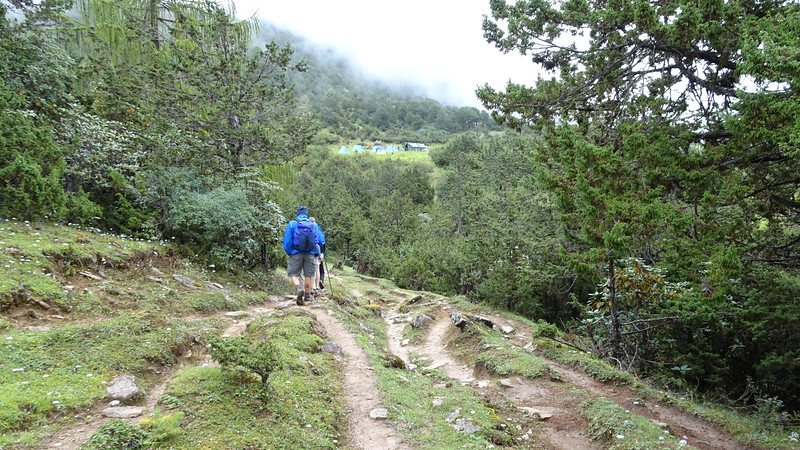 It was another weed-filled field, but with fewer cow pies 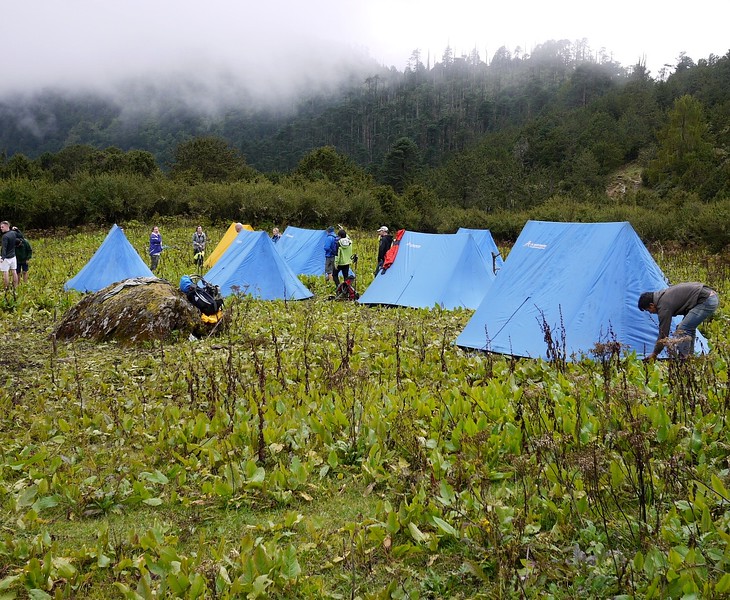 Dan in his natural habitat

How some spent the afternoon

As we sat around on the chairs (also provided by the tour company and carried around for us from camp to camp) and discussed our trek so far, someone mentioned how nice a roaring campfire would be. It would not be just warm, but provide a central gathering point for us, instead of stuffing ourselves into the dining tent for another evening.

Watching the clouds roll across the hills : Video

Mick was volunteered to approach Chunjur and ask if we were allowed to make a campfire. Not only did Chunjur allow it, but he insisted that his guys gather the necessary wood and build the fire. We felt a little guilty as we listened to them hacking away at dead wood with their machetes for the rest of the afternoon, even as we repeated our offer to help. But our request and their work paid off: we had a fabulous fire and a rip-roaring good time that night. I took my secret bag of Swiss Lindt chocolates around to each of the porters as a small gesture of thanks. It was also a good way to keep me from eating them all.

Cutting down the firewood 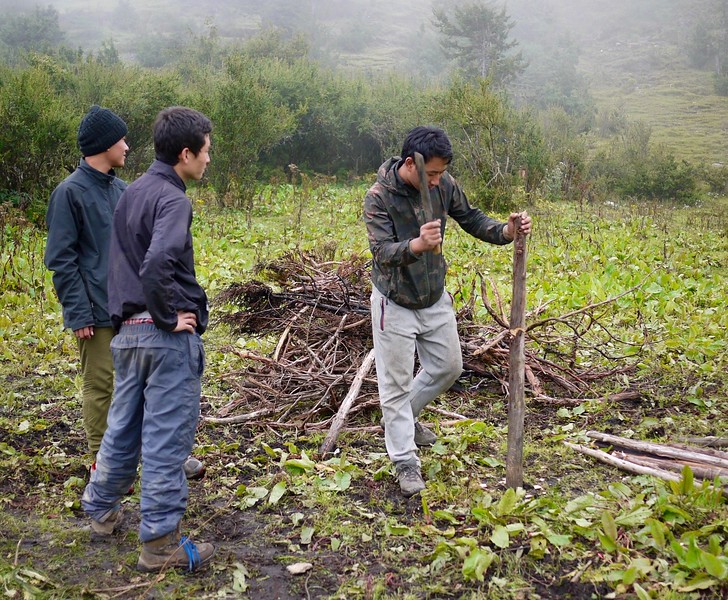 The calm before the (alcohol-induced) storm…

The “storm” started when dinner was served outside the dining tent, where we had already made ourselves comfortable around the fire and helped ourselves to the alcohol that was provided. The Peach wine from Bhutan was smooth and went down easily. The Bhutanese whiskey was also praised for being smooth and drinkable. The addition of a bit of rice, vegetables and sauces only gave us more energy for what was to follow. It started when someone called out for some songs to be sung. Our group would dig around for a song, belt out the first few lines with enthusiasm and then trail off as we realized that we didn’t know more than the first few lines. This went on and on, and we were running out of songs to bastardize. Fortunately, our porter friends stepped in to help: they suggested that we play a game. Chunjur explained that they would sing the first verse of a song. They would then call out the first letter of the last word. We would then have to sing a song that began with that letter.

They had obviously played this game before. Here’s a video where you can hear them sing a bit : Video

I couldn’t see through the flames how many were participating from their side, but they essentially won the game right out of the gate. Their voices were smooth. They harmonized. They knew more than six words. When they called out a letter at the end of their stanza, our group fumbled loudly for an appropriate answering song. Rarely could we find one and when we did, we didn’t get very far before giving up and sending a letter back to the Glee Club. The fire continued to burn as we emptied the bottles and did our best, but eventually we gave in and little by little, our group retreated to our tents.

I have no idea what time the fire finally burned out, only that I burned out long before it did. Dan and I retired to our tent, this time with me wearing just about every warm set of clothing I had with me. I was ready for a good night’s sleep!