Technical Information is based on Dan’s watch. Below are the round trip links to the trip data. If you click on the name “Tiger’s Nest” you’ll get more details…for those geeks who just “have to know”. Plus, you can click on the Terrain feature and see the elevation lines of the mountain ridges. Looks much more impressive that way.

Tiger’s Nest. Even though I had read over the itinerary for this trek, the name “Tiger’s Nest” had apparently rolled in one ear and out the other. But now that I was on a bus riding the bumpy road up to the base of the trail, it dawned on me just what “Tiger’s Nest” meant. I had seen pictures of it over the years and now I would be at this famous landmark in just a few short hours!

Or as it turned out, a few long hours. My god, but elevation gain and I just don’t get along.

Chunjur, our cheerful guide throughout our time in Bhutan

Still fresh before the hike

Everyone was on the bus except Ciaran, the guy from Ireland. We gave him a hard time about missing the eight o’clock meeting time, but his excuse was pretty good: his watch was still on Nepalese time, which is fifteen minutes later than Bhutan. Ah, the intricacies of international travel and imaginary lines.

The bus wound its way up the tree-covered mountainside. Seventy percent of Bhutan is covered by trees – mostly Blue Pine – and the kingdom demands that it stays this way. Each community is given a tract of land to take care of, usually 500-700 acres of forest. The community is responsible for the health and replanting of this land, but they can harvest and profit from the resources as they are needed. However, the community is also responsible if any of the trees are illegally cut or burned, so it is in their interest to keep an eye on it. The system works well for both parties.

Starting up the path to Tiger’s Nest 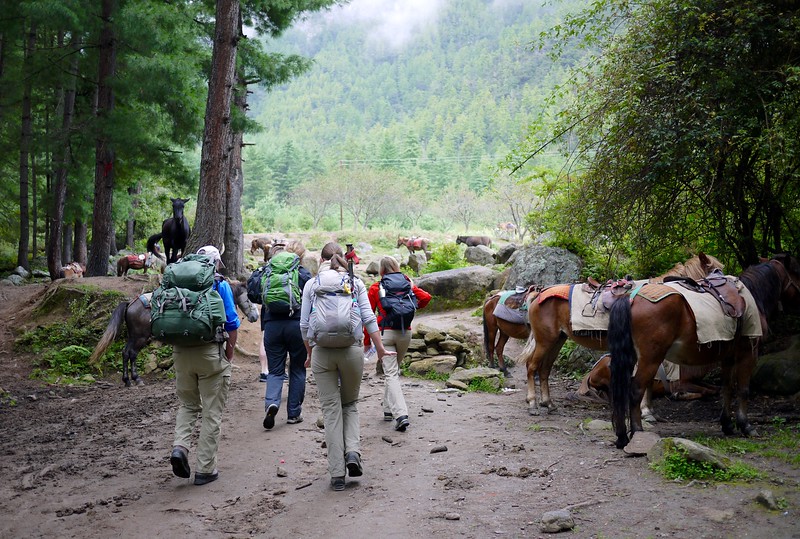 A close up of one of the saddles – no, I wouldn’t be riding today

Our destination up on the cliff face, hiding in the clouds 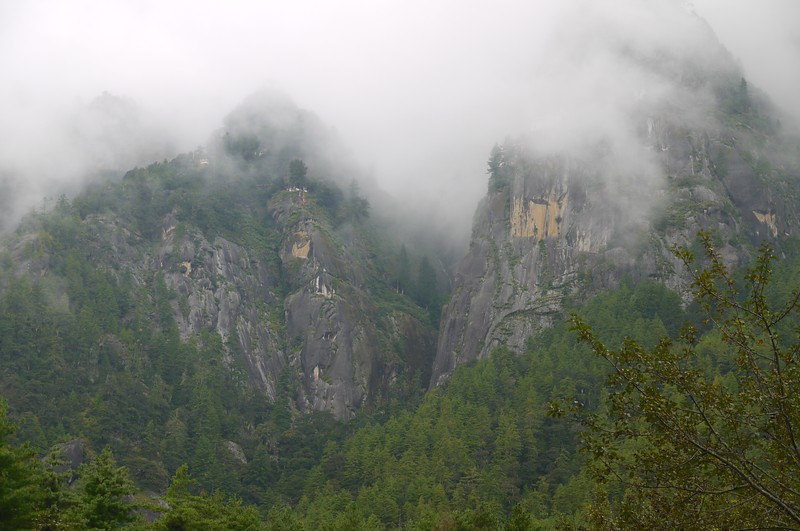 Temples in the forest

So far the hike had been a gradual uphill trek through the forest and with occasional views down into the valley below. The group – sixteen of us plus Chunjur – eventually strung itself out. The fast and strong hikers took to the front (that would include Dan) and the slower and not-so-fit hikers brought up the rear (that would include me). Periodically Chunjur would stop and let the group re-group. Usually this meant that he told funny tales, or dropped tidbits of interesting information while waiting, and that by the time I showed up, the gossip was over and the group started to move again. This was a tiny bit frustrating, as I like to hear funny tales and tidbits of interesting information when I can.

As a note, most of the photos are mine, but when I use one of Dan’s pictures (Yes! He finally bought himself a camera!) I will note it. As illustrated for you with the next photo…

Re-grouping on the trail. Chunjur is in the traditional National outfit

Tiger’s Nest through the trees

The approach to Tiger’s Nest was a tease. Just when you think “I’ve finally made it!” you realize that there are actual stairs that lead you down, and then back up again. Chunjur said that there are 1,400 stairs in the round trip journey, not including the actual hiking portion itself. So many stairs, and just when I thought I was done.

Looking down, because what goes up, must come down

The sheer cliff the monastery sits on

Just imagine all of those stairs! 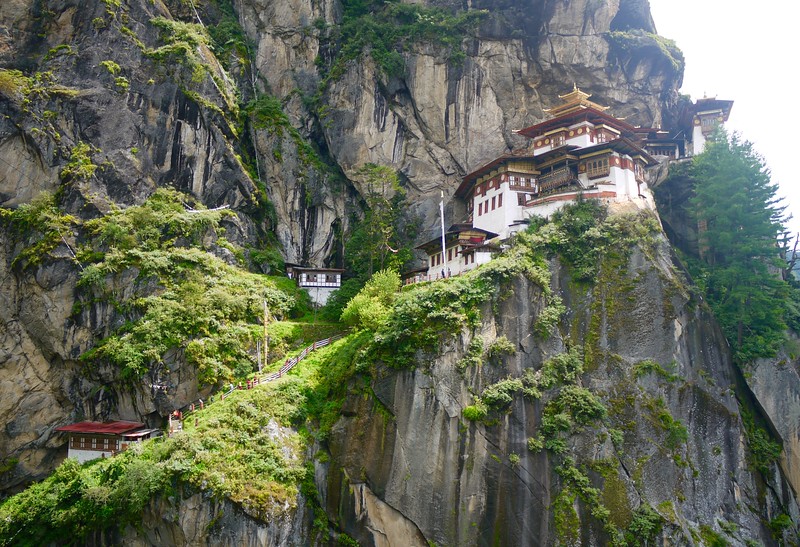 We took a break at a good photo-op site located just before the downward stairs began. The problem with going down the steps is two-fold: 1) they can be hard on your knees, and 2) you have to come back up. I forgot about #2 as I was going down as I wanted to concentrate on keeping #1 from being a problem.

The trail was by no means empty. Our group was one of many, although most of the other people appeared to have a more pilgrimage goal in mind. Tiger’s Nest is well-known and enjoys between 40,000 and 50,000 visitors per year. Our own guide says that he makes the trek 30 times a year. But I could hear other languages being spoken as people passed by me, either coming up or going down. I even heard a couple of women speaking Swiss German to each other!

Our group was wildly scattered by now, as many stopped to take photos while others surged on ahead. I found myself alone, watching the others as they made their way to the monastery. Of course this was also an excellent excuse for me to catch my breath. I was a little worried about the altitude: even though Paro is at 2,195 (7,299 feet) meters, I was now at 3,120 meters (10,240 feet). Nothing terribly high, I know, but still high enough for me to want to pay attention to my health. So I sat and watched and listened to the sounds of the waterfall.

Some of the trekkers coming down the stairs

The bridge at the waterfall 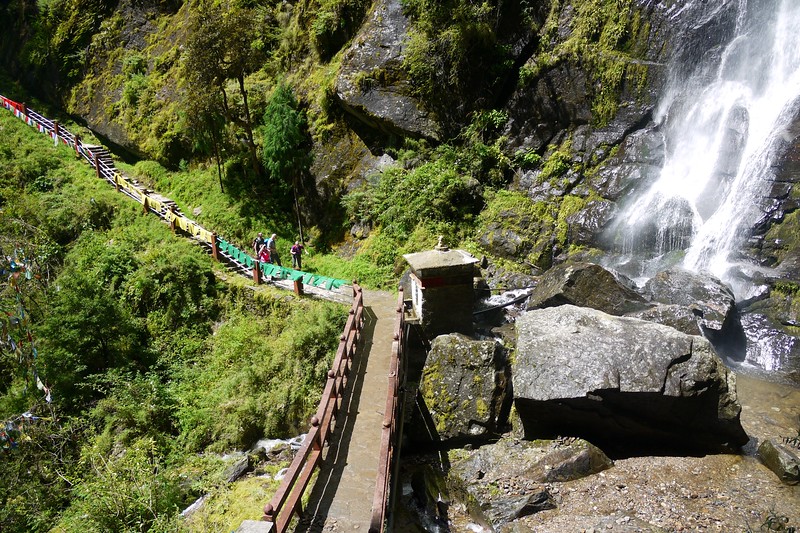 We all gathered outside of the monastery and prepared to go in. Everyone needed to cover their legs and arms, but hats must be removed. Packs (and cameras!) were stowed and shoes left at the door; we all proceeded in our stocking feet for the entirety of the tour. As I couldn’t take any photos, I can’t show you how the buildings were fitted into the living rock of the cliff, or the massive wooden beams spanned hallways and roof lines overhead. Originally built in 1692, there had been a great fire in 1998 that burned many of the buildings and their contents – and sadly, one monk. There is a vivid story of the name “Tiger’s Nest”, which is best explained by someone else, probably the Wiki page will do just fine.

After seeing many of the inner rooms and having the legends and traditions told to us, it was time to head back. We put our shoes back on, sorted out our packs and removed our excess clothing. It was time for the stairs once again!

Rain approaching from across the valley

Stairs going back up

About one third of the way down we stopped at a cafeteria. We had stopped here on the way up as well, but just for a short break and some tea. This time we would be served a hot meal and – you guessed it – more tea. The break was welcome and the group was once again together in one spot. I got a chance to talk with Dan and get his take on the hike so far. And of course, he loved it. The trek up the mountain was nothing for him. Oh well, I expected nothing less from him.

The hike back down went much quicker than the assent and it wasn’t long before we were back in the bus and heading into town. The plan was go into Paro and check out the town and the shops for an hour or so before heading back to the hotel. So – explore we did!

Painting over the old designs 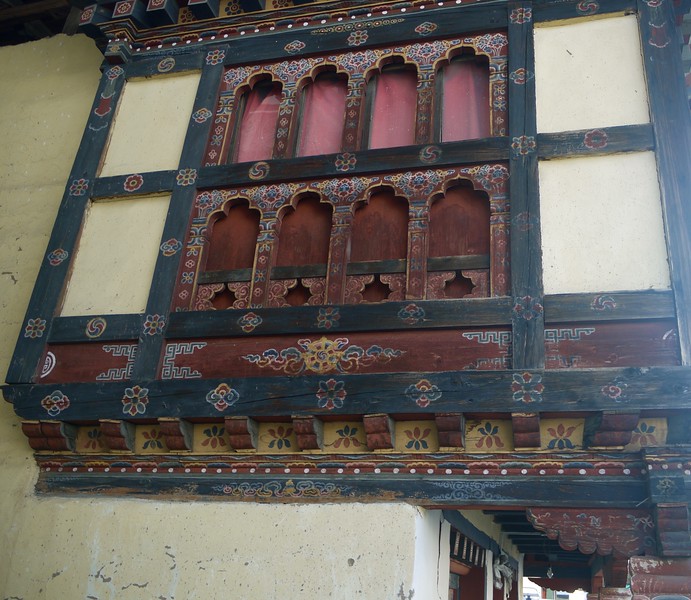 This little guy was happy to show us his ride 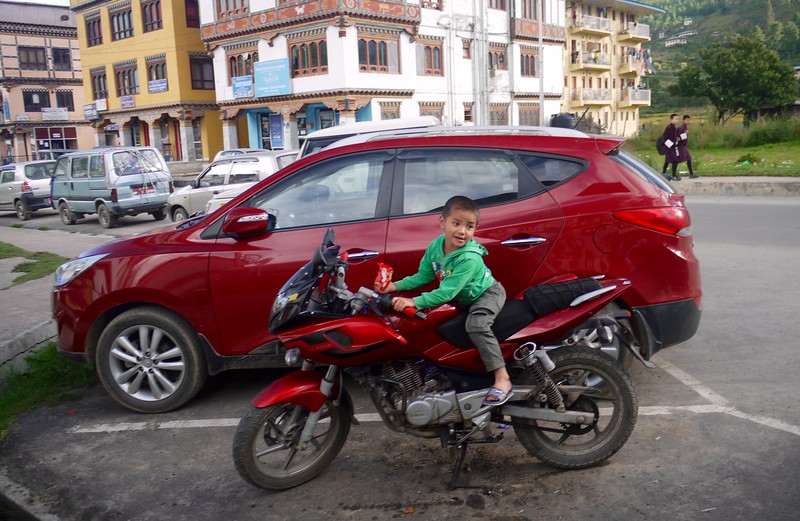 Marijuana grows wild here, but no one smokes it 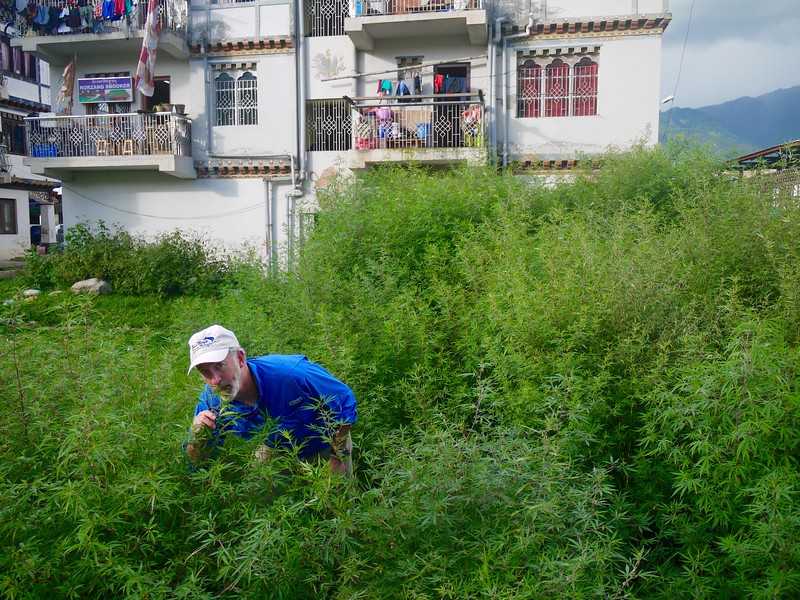 Drying chilis were a common sight 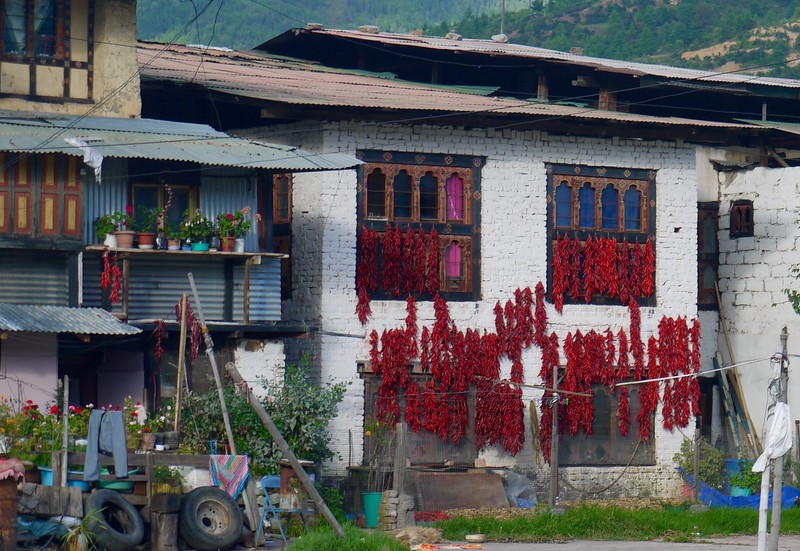 One of our group, Matt, discovered that his boots had taken a turn for the worse. Unnoticed before he left home, the soles of his boots had rotted away and were coming off quickly. We took a detour in town to find a shoe repair shop that might be able to help him, but they said that it was not possible. He later tried to solve the problem with sutures and duct tape, but that didn’t last. Fortunately he had the option to buy a back-up pair of hiking shoes from one of the shops in town.

Scene at the shoe repair shop

Chunjur said that the local people loved to have their photos taken and would often ask you to wait while they fixed their hair or adjusted their clothes. I saw these three characters sitting on a bench and I asked them if they minded if I took their picture. The two women ignored me and the man simply looked directly at me and proceeded to pick his nose with his little finger. I took the picture anyway. 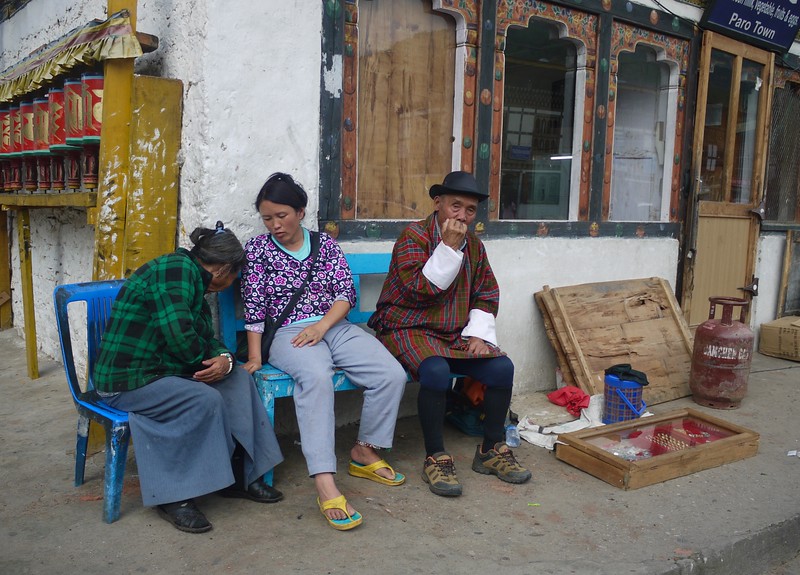 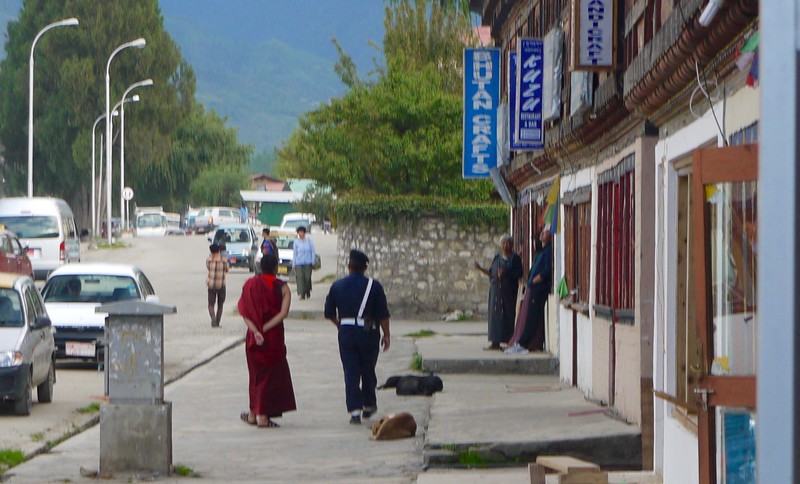 We got back to the hotel with plenty of time before dinner, so I took a short walk to see what was in the neighborhood. Not much, but I took photos anyway. That’s what I do 🙂

Looking up the valley

Tomorrow would be a day of leisure and culture. And tonight would be a dinner of rice and tea. I should note that the meals were actually quite good. As a westerner, I am not used to having rice every day, but the vegetables and additional choices were always quite tasty. It was always a buffet-style meal at the hotel so I could pick and choose what looked good to me. And I started to enjoy the mango fruit drink instead of tea…