Technical Information is based on Dan’s watch. Below is the link to today’s trip information.
Pre-Lunch (only one file today)

Today was Blessed Rainy Day! I had read through the airline magazine during the flight into Paro and on one of the pages was a table listing the National Holidays. September 23: Blessed Rainy Day. It seemed highly appropriate, given the weather we’d been having. I asked Chunjur what the holiday was all about and he said that there wasn’t much too it. There would be no festivals or dances, but instead families would gather and enjoy the day together. I imagine it is like the US version of Labor Day, but here on the mountain there wouldn’t be many families around to gather.

We would reach the highest point yet on our trip, a pass called “Jimliangtsho” at 3,880 meters (12,730 feet). But first I had to thaw out: I had worn extra layers of clothes inside my sleeping bag and while it helped, it did not help enough. I remember tossing and turning, annoyed that I wasn’t asleep, but knowing that I was getting some sleep because I kept waking up to bits and pieces of scattered dreams. I welcomed the morning because I knew I could just give up on any hope of sleep and get on with the day. And what a day it was going to be: a steady climb up to the pass and then a short downhill hike to camp at a lower altitude. I hoped that the sky had cleared enough to allow for a view. Silly me.

The seven o’clock tea service was right on time, although most of us were already out of our tents and moving about the campsite by then. Last night’s fire was nothing more than a pile of charcoal and ash and the empty bottles were scattered about. The bottles would be picked up before the last person left camp. The government takes a tally of the number of cans and bottles that are packed for a trip like this, and they expect that an equal number of cans and bottles will be returned upon the group’s return. I am not sure about the fate of the rest of the refuse, other than seeing piles of it set aside to be burned in future fires.

Last night’s revelry brought home to Dan and I just how lucky we were. Here we were, two people thrown into a group of sixteen and we felt comfortable with every single one of them. There was no one in the camp whom we wanted to avoid, or even “rather not talk to.” Everyone was interesting and had something to add to the group. No one was mean, or spiteful, or even grumpy or negative. It was a most fortunate grouping, especially since we were officially “stuck” with each other for six days in the wilderness. And the skill set was just as compatible. Sure, there were faster and slower hikers, but at the end of the day, we did the required miles and no one begrudged the others’ pace.

Heading out on today’s adventure

The day started out easy with a level path through another other-worldly forest. I was really enjoying the variety of the vegetation I was seeing on this trip! 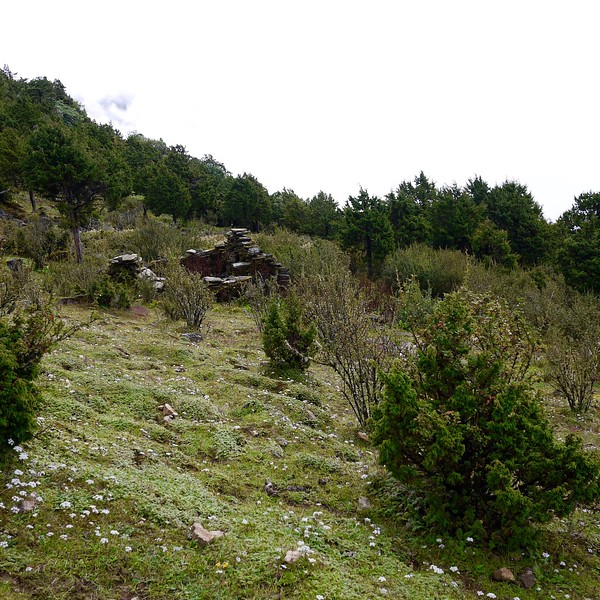 Remember that level path two pictures up? Yeah, that was already a thing of the past. The forest fell away and the landscape rose up to the sky. The billy goats (that’s what I took to calling the three to four guys who were constantly at the front of the pack – and yes, Dan was often part of this group) ran ahead, Chunjur having pointed out a nearby landmark for them to aim for. Meanwhile, I took my time and enjoyed the view and the plants and the ever-increasing steepness of the trail.

See the “tree” on the rock at the top left? That’s one of the “billy goats” who ran ahead 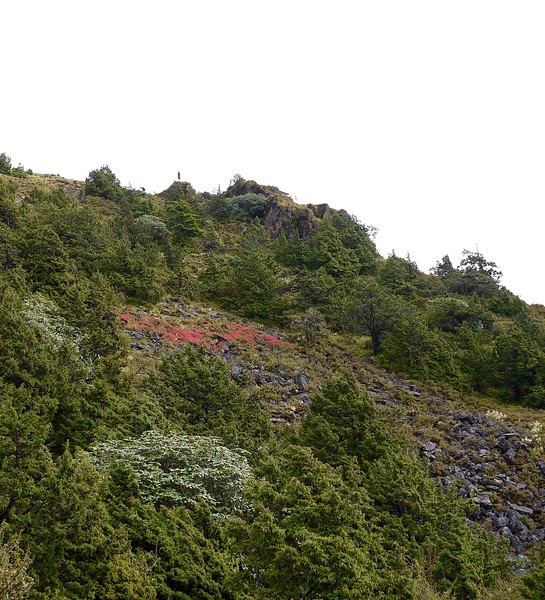 Looking back down the hill 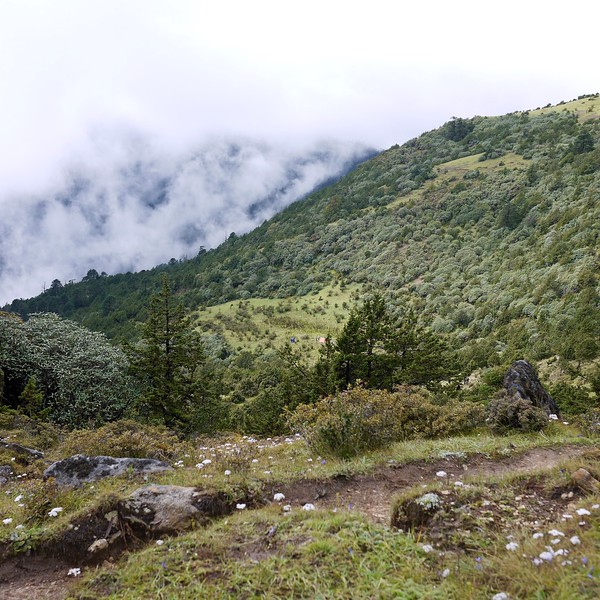 And looking up the hill 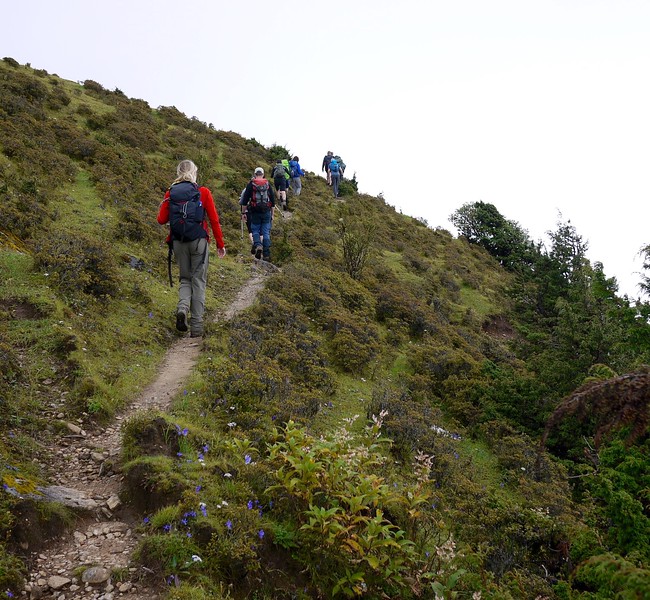 (Dan’s) Yours truly at the rock visible earlier (and a rare shot of Dan!) 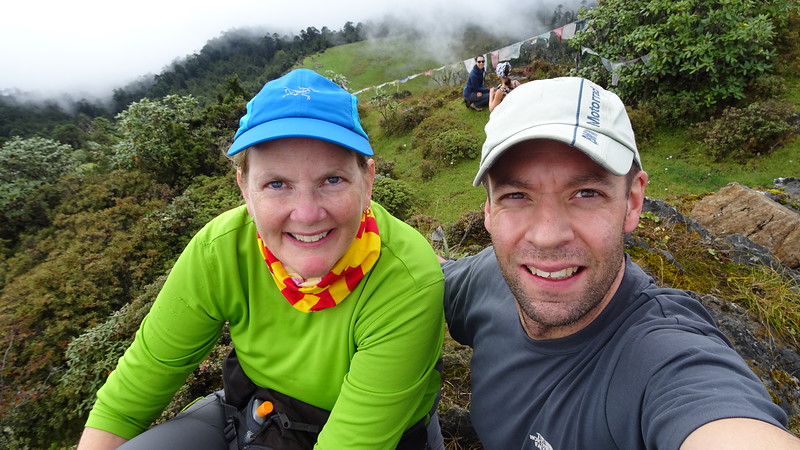 From “the rock” we continued moving on an undulating trail that hugged the side of the mountain. The clouds swirled below and above us, giving me a sneak peak at the scenery beyond the immediate fields. Today I enjoyed the nearby scenery the most, as the vegetation took a turn for the better. Flowers and colorful plants had made a grand appearance

Hiking in the clouds 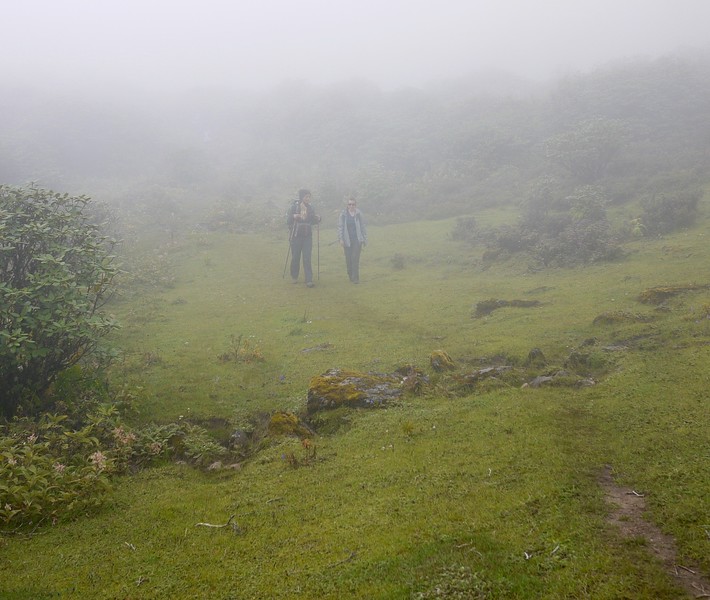 My boots, as I mentioned, were fantastic. Dan commented that we probably went on overkill in the technical aspect of them (sturdier and heavier than required for the trails we were on) but honestly, I was happy with the additional support they gave me. I stepped with confidence, regardless if it was on a muddy slope, swampy hillocks or playing Frogger when crossing a wet field and hopping from rock to rock. In addition, they were waterproof: one hundred percent waterproof in water up to something like 4″ deep. This meant that I could step more casually across the frequent streams and wet fields. I had worried that Day 1 would give me blisters and sores and I would have to nurse my feet for the remainder of the trip. Those worries were left behind as each day proved that I had made the right choice with this boot. Which, I should mention, is from Hanwag, an Austrian boot manufacturer since 1921.

Another water crossing – and more clouds 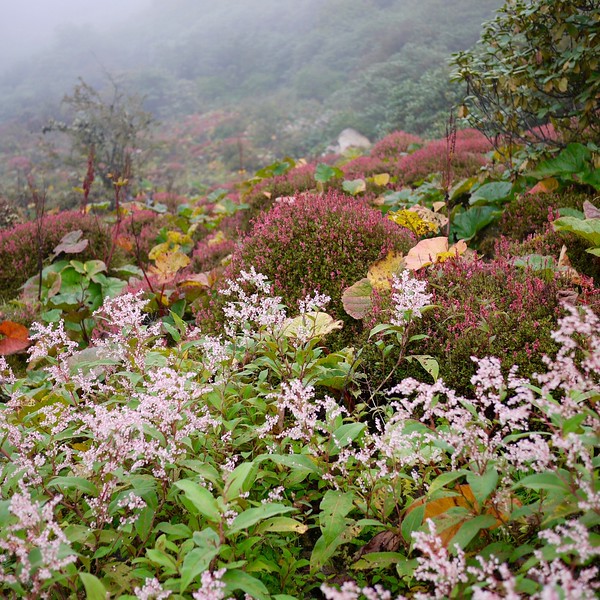 At one point during a re-grouping break I approached Chunjur about the Lunch Packhorse Situation. I wasn’t the only one to grumble about the lack of personal space that the guys were giving us trailing hikers. I explained that they were very friendly and not pushing us, but we felt uncomfortable with how close they continually crowded. Chunjur seemed a little surprised at the request, but he immediately walked over to the guys and passed along the information. I felt bad about it, as they were otherwise so friendly, but it really did help reduce the pressure on us at the back of the line.

The trail went up. There is no other way to describe it. Rocky steps were the norm and uphill dirt sections nestled briefly in between. It was difficult for me: I would hike for what seemed like fifteen minutes and then stop to catch my breath for five minutes. Hike, hike, breath. Hike, hike, breath. I felt like a superstar when I didn’t have to stop for thirty minutes at a time, but that didn’t happen very often. The landscape was open enough that I could see the rest of the group stretched out ahead of me, with those in the front tiny dots of color in an otherwise green scene. I stopped taking so many pictures so that I wasn’t any further behind than I already was. 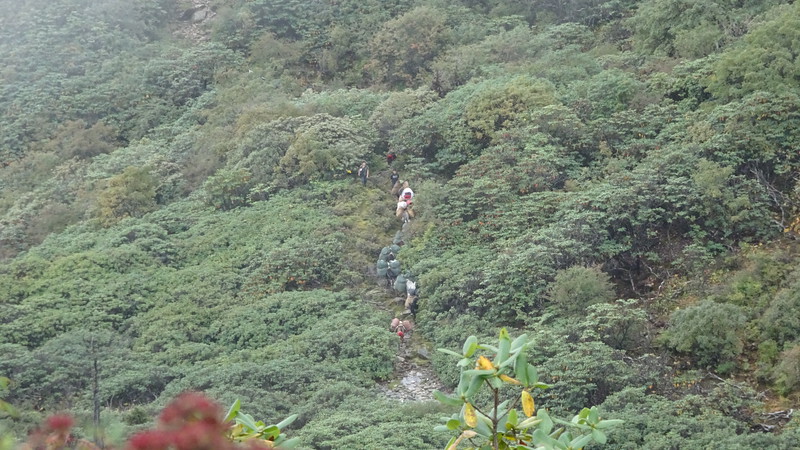 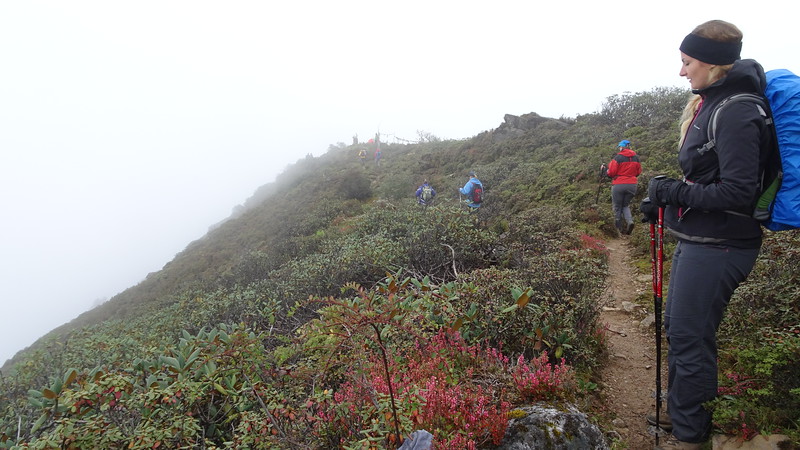 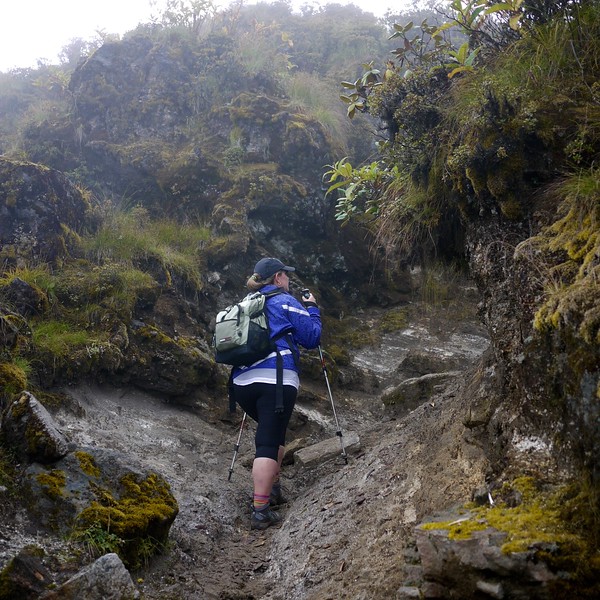 The hike so far had been fairly consistent: hike up a gradual slope, the slope becomes steep, the trail crests a rocky outcropping, the trail drops down slightly and then stretches across a wide slope, gradually gaining more altitude before getting steep and cresting another pass. Ok, so this is a really generalized description, but it was consistent enough for me create this observation.

The group would always gather at these passes in a sort of mini celebration and a massive photo shoot. Everyone’s cameras came out to catch the prayer flags, each other and any bit of a view that might present itself. It was fun and everyone joked around and made observations about the hike so far. One of the most frequent subjects was “How much longer until ‘X’?” Someone would pose this question to Chunjur and he would smile and give an answer like “We’ll be at camp in thirty minutes. Plus plus.” The “plus plus” was the joke: Chunjur’s estimates were always wrong – and on the low side. When he said “thirty minutes” I knew that it would be close to an hour. To be honest, he probably could make it in thirty minutes, but there was no way I could. It became the running joke that whenever someone mentioned a time, someone else would immediately pipe up with “plus plus” and we’d all laugh. Even Chunjur cracked a smile. 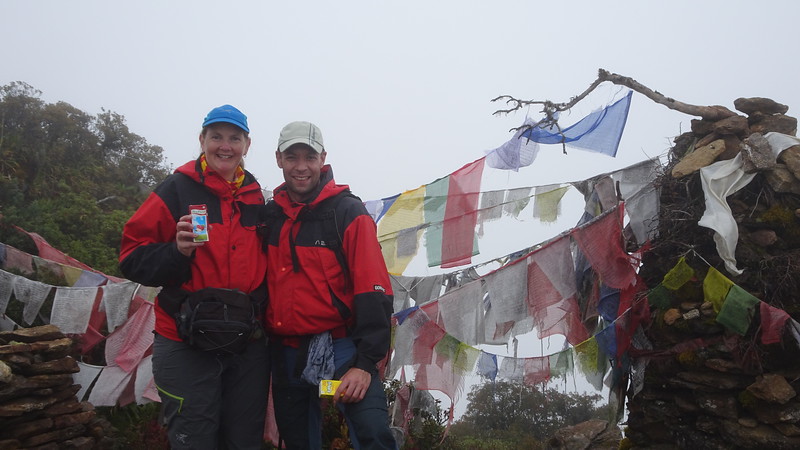 We were on the downhill leg to our campsite. Chunjur warned that it would be steep and he wasn’t wrong. I was worried about my knees again, as downhill segments are often very tough on this joint. I had figured out how my knees work best and created a little mantra to make my days more comfortable: Right to Rise, Left to Lower. For whatever reason, if I use the wrong knee for the wrong motion then there are two very different pains that I feel. But if there is a step up and I use my right leg to push off, all is ok. If it is a step down and I use my left leg to lower myself down, all is ok. So, downhill I went, putting that left leg to work. And I was so busy doing that, I forgot to take more photos. 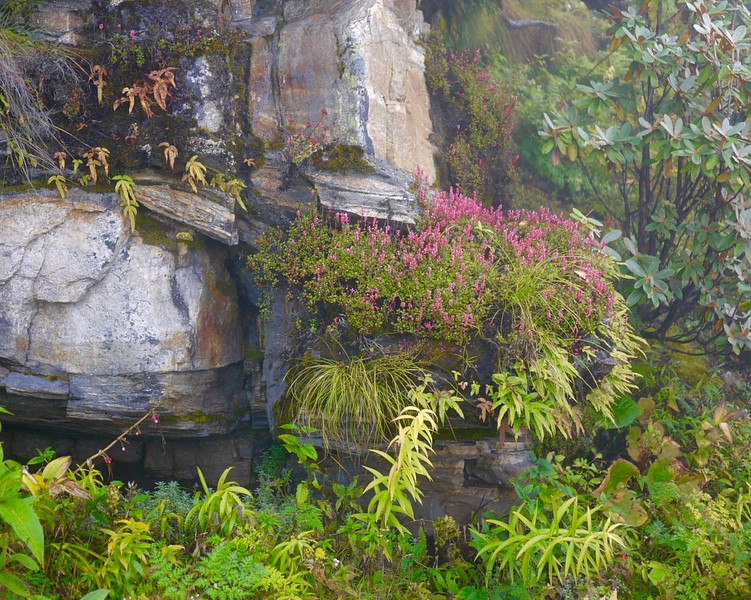 Following the side of the ridge

We reached the lake! I knew that we would be camping somewhere near a lake so as soon as I saw it, I knew that the day’s journey was almost over. But surprisingly, this was also the hardest part of the day’s hike. The shoreline was wet, muddy and with no navigable trail to follow. My waterproof boots (I just should just name them Big Blues, since they feature so prominently in this trip) were fantastic and took me right through the sucking mud and flowing water. 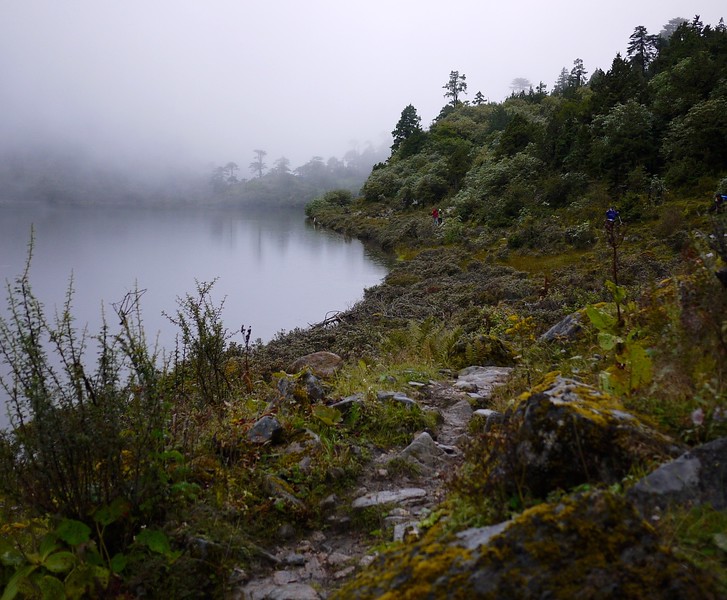 The campsite – on the other side of the swamp 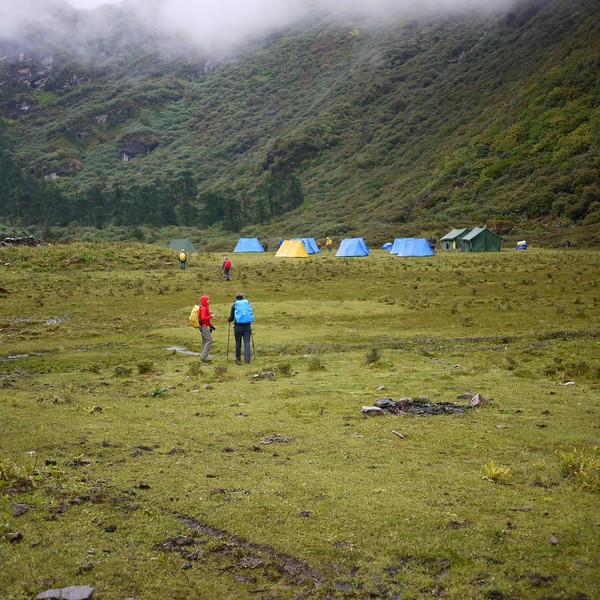 Our campsite was above water – but barely. A stream ran down the valley and emptied into the lake and our camp was set along the banks. The packhorses had been left to graze and they settled into their own little groups in the valley. This was one of the most beautiful settings I’ve ever seen for a campsite. The only thing that could make it better would be some sunshine. 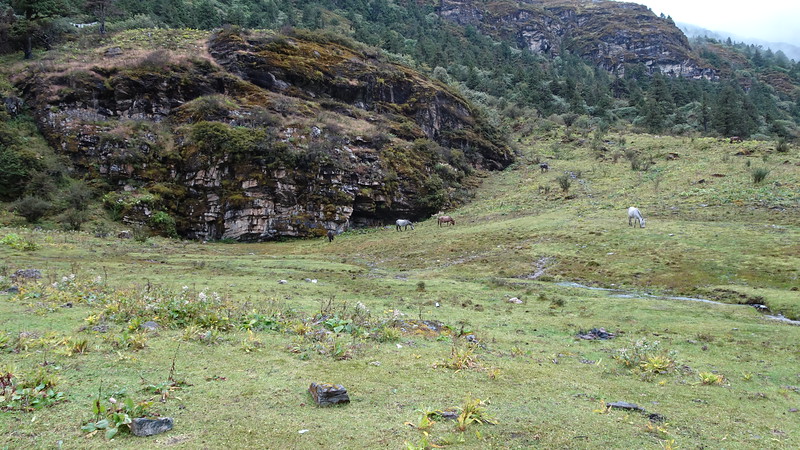 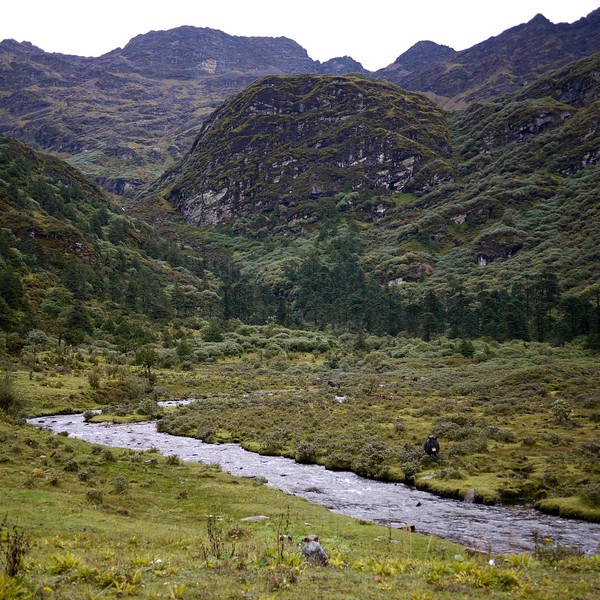 The cooking tent, surrounded by mud 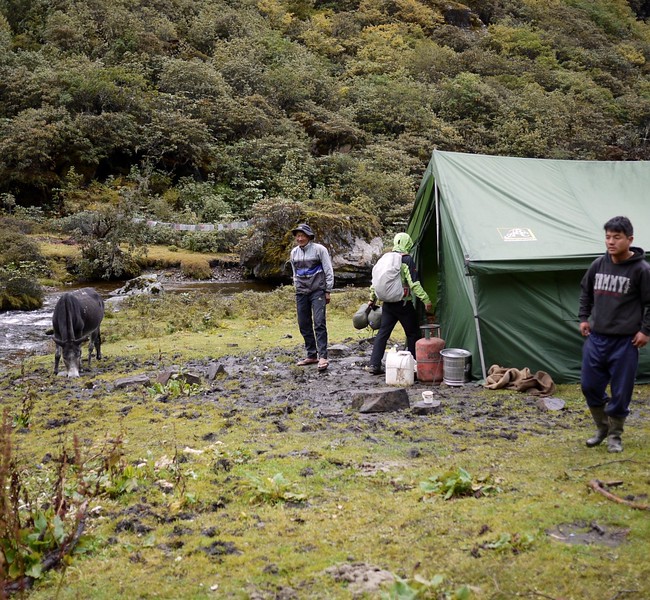 It was time for my second suggestion for Chunjur: the privacy tents. The guys who put these up obviously never used them, as they put the seat smack dab in the center of the tent. This meant that there was all sorts of room behind the seat, but when sitting down, you ended up with the tent pole practically in your lap. I pulled Chunjur aside and asked if his guys could maybe offset the placement to be further back in the tent. Chunjur was once again a little surprised by my request, but he didn’t waste any time in instructing for the new layout to be done. Once again my fellow trekkers, who had also complained about this, thanked me when they heard that I had made this suggestion. That’s me: all about improving life, one latrine at a time.

The afternoon turned to night and the temperature dropped. We huddled in the dining tent and enjoyed an especially tasty meal of rice, potatoes and mushrooms, emptying more bottles of Peach wine – and a few other bottles as well.