With Covid miraculously “gone”, Dan and I felt free to travel again. Yes, I realized that Covid wasn’t really “gone”, but with all restrictions removed, we at least knew that the borders would not suddenly close or quarantine requirements wouldn’t change. So we arranged for cat sitters, I reserved some rooms and we packed our bags. It was time to hit the road!

We were on our bikes shortly after noon on Wednesday, having packed light in anticipation of a low-key holiday. I had programmed the GPS for our destination in Langres, specifying to avoid tolls and motorways. It was perfect weather and the roads we took were almost empty. Ah – it felt good to be on two wheels and on the road!

The French love their colonnades

The Big, Bad Wolf would have a hard time with this one!

The first of many rape fields – and dandelions!

It was a short riding day for us, somewhere around 200 kilometers and over four hours. Technically it could have been a lot faster, but we took our time and had made quite a few stops along the way. It was a “stop and smell the flowers” sort of day.

No more flowers – now it was just time to “stop”. We had reached the historic town of Langres and made our way up the narrow streets to our AirBnB for the night. I don’t think that I could have gotten us more “central” than we were now.

Our room is behind the buildings on the left

Walking through a passageway, we found ourselves in a small courtyard – and at our room for the night. I like to put us in the center of historic districts so that we can fully immerse ourselves without much effort.

Our room on the ground floor

It was a quiet and clean room, at least until we unpacked our bikes and changed out of our motorcycle gear; then there were clothes and bags everywhere. Comfortably dressed in our street clothes, it was time to explore the ancient walled city. We started by immediately going to the nearest wall.

View of a town street from the wall

View to the countryside

I was a little uneasy about this building technique 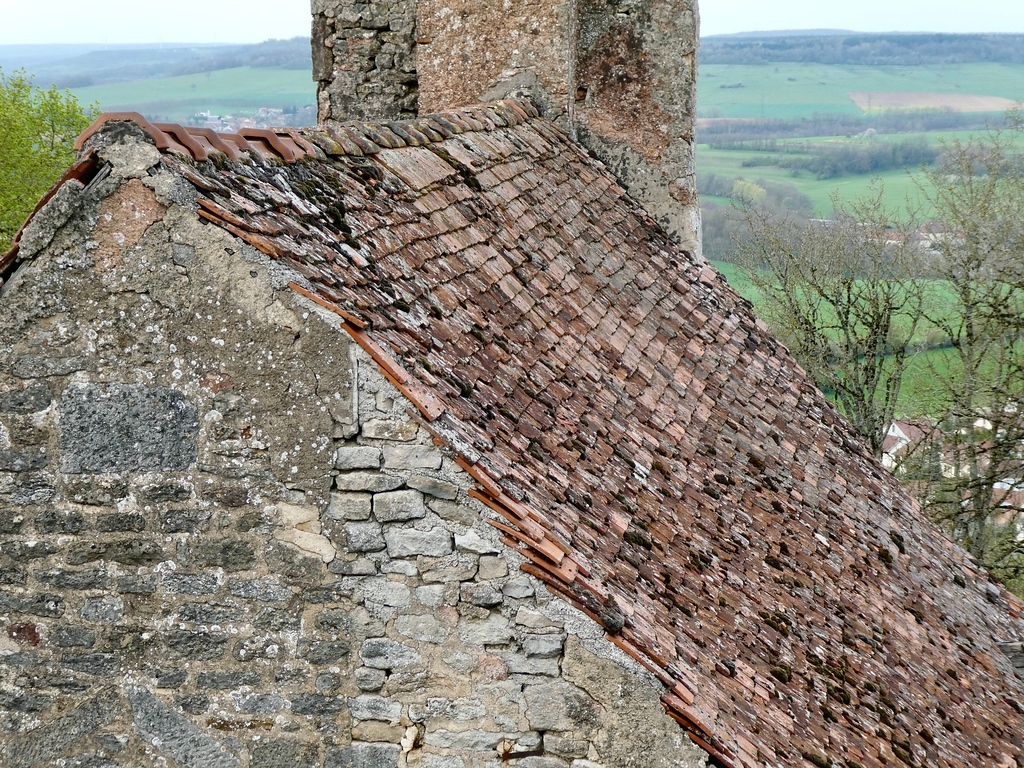 Looking back at one of the seven gates of Langres

Some of the gates go back to Roman times

Despite the almost constant flow of vehicles, Langres was a quiet town. I couldn’t figure out where everyone was coming from nor where they were going, but “go” they did! The shops that were open seemed to be doing ok, but there were a surprising number of closed shops, with some that looked like they had been closed for a long time. Just what did people do here? Were they totally dependent on tourists?

Langres got its start in life during Roman times, around 52 BC, and enjoyed great prosperity for centuries. It wasn’t until “the occupation of the Lorraine (1670-1698) and the integration of the Franche-Comté (1678) brought a lasting peace, but tolled the knell of the fortified town. The creation of the Dijon’s diocese in 1731 at the expense of Langres’, contributed to the decline of the city which saw its population stagnate.” (link)

And now, in the 20th Century, Langres continues its fight for survival. “The opening of the Paris-Mulhouse line in 1858 and the canal from the Marne to the Saône in 1907 did not boost the economy and the demography. Trends will be rushed only at the middle of 1950s with the implantation of important industrial and creative jobs. So the city grew outside of the ramparts creating new districts towards the South.” It is always painful to see these beautiful and historic locations languish, but without an industry to keep them alive, how can anyone afford to maintain them?

We eventually completed a good portion of the wall walk and considered dinner. We weren’t terribly hungry and the few restaurants that were open didn’t entice us. We settled on some ingredients from a local shop and made a couple of sandwiches. It is a typical standby meal for us and it was once again successful.

A number of shops looked like this: closed, but for how long?

Post-dinner walk on the walls