Oh my – what a night. It was a comfortable bed, and the room itself was fine, but the noise! Constant, loud noise came in through our windows. A bar on the ground floor provided plenty of laughter and yelling and chatter, while the street turned out to be a major thoroughfare for scooters and cars. And many of the cars sounded like they were more for the “look at me!” type of people, with loud exhausts and racing down the short street. Maybe this was not such a pleasant apartment after all.

Putting my grumpiness behind me, Dan and I discussed what we would do. I had read about boat tours that you could take up and down the Loire and I had imagined what a pleasant way that would be to see the various towns and castles the line the banks of this famous river. Unfortunately those tours turned out to be nothing like what I was expecting, and they fell far short of what I wanted. We’d skip the boats and check out the river ourselves on another day. Today we’d see more of the city.

We started by crossing the Jacques-Gabriel Bridge to look at Blois from the other bank. It was a pleasant bridge to walk and the river was running freely beneath the ancient abutments. A bridge has linked Blois to Vienne (the community on the south side of the river) since the 11th century, but this iteration has stood “only” since 1724.

Looking at Vienne from Blois

The other side of the river didn’t hold much interest. On one street that paralleled the river from the north, small historical signs noted the various flood levels that the area had seen, but otherwise, it was a pretty empty area for exploring. 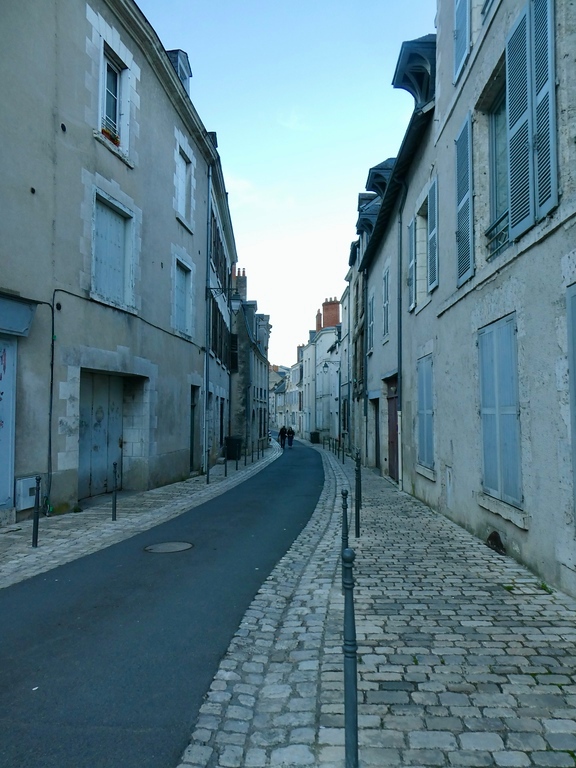 One sign mentioned how visitors to Blois arrived by this road and they were awed by the view prior to crossing the bridge. I can imagine in those days that this was indeed a very impressive sight! Even today it holds a sense of magic and majesty. 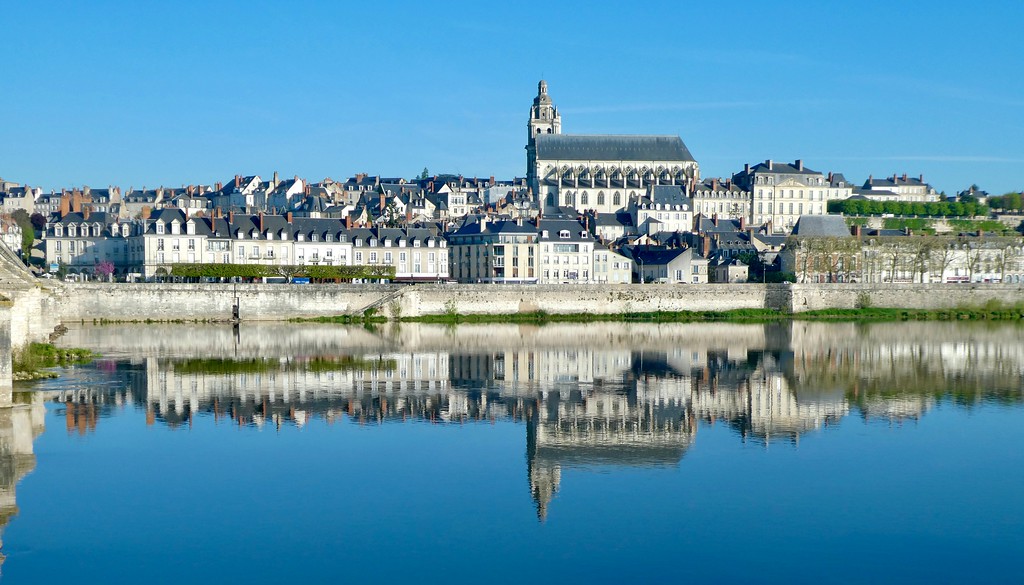 The river, while wide, is quite shallow. In fact, I was wondering just how any commercial boat traffic (from any era) made its way without constantly running aground. I did a bit of research and found that the boats typically used had a wide, shallow draft and a flat bottom. Made sense, now that I knew it.

Typical commercial boat on the Loire

One of the brass marker designs found in the area 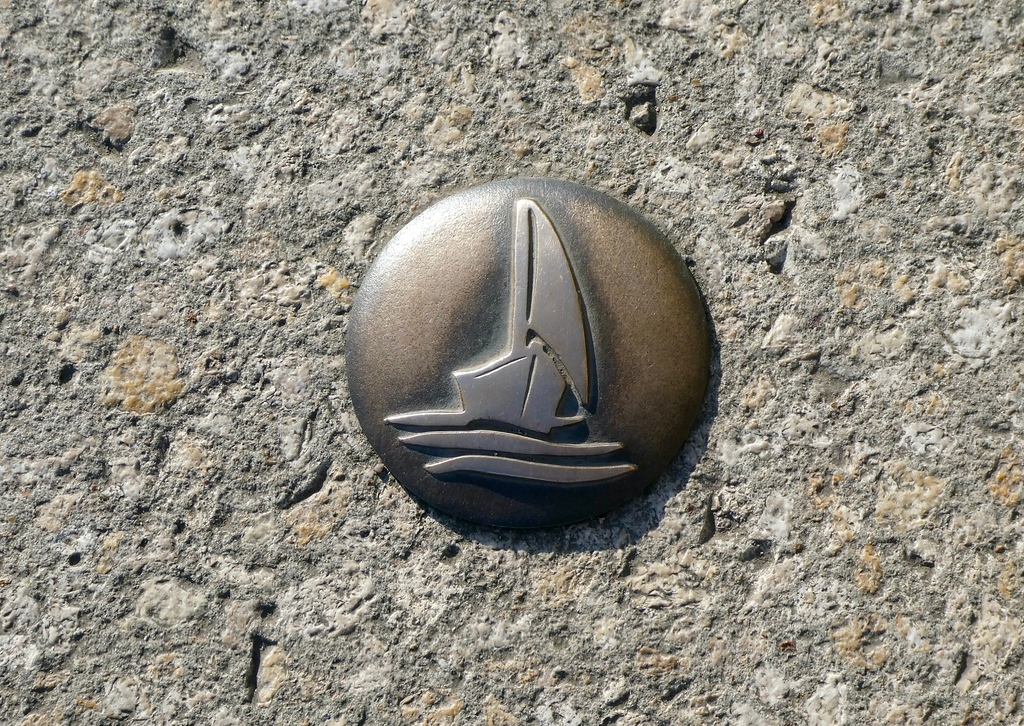 Ducks – and a beaver! – near one of the bridge abutments

The European Beaver was extinct in this area by the 19th century, but in the late 1900s, people had started reintroducing them. A population was established in in the area in 1996 and it has been very successful. I was quite surprised to see one out here though, in the middle of the wide – and treeless – river.

Back in Blois, we headed towards the main draws of this town: the castle and surrounding buildings. It really is a small place and we were at our goals in no time.

The Jesuit church from 1671 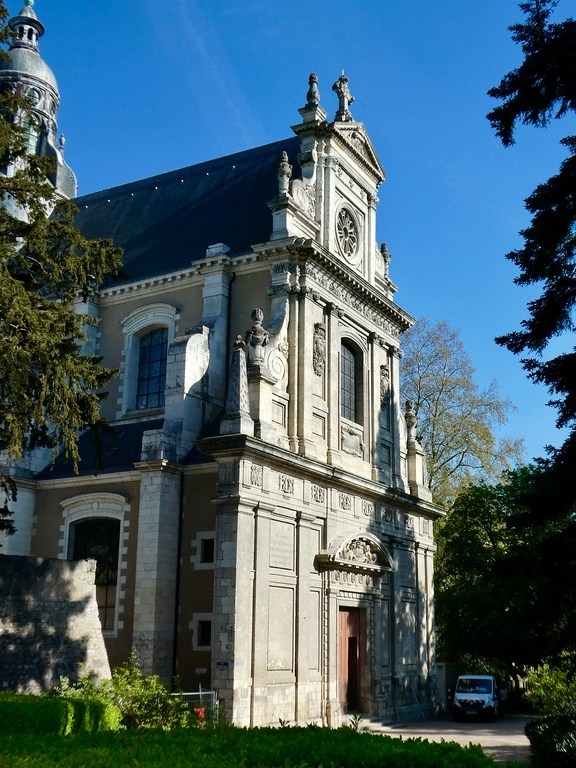 There is a massive staircase that rises from the main street directly up to the Cathedral. It is planted with flowers and is a pleasant place to sit and watch the hustle and bustle of people.

Staircase commemorating Denis Papin – nice to see someone other than royalty or military celebrated!

We walked passed the cathedral we had visited last night and reached a wide, tree-lined overview. It was a majestic view, although I must say that I’m not a fan of the barren and minimal landscaping often found in French gardens. It didn’t help that it was still early in the season and not many plants had woken up from their winter slumber. Still – it was a nice place to take in the scenery. 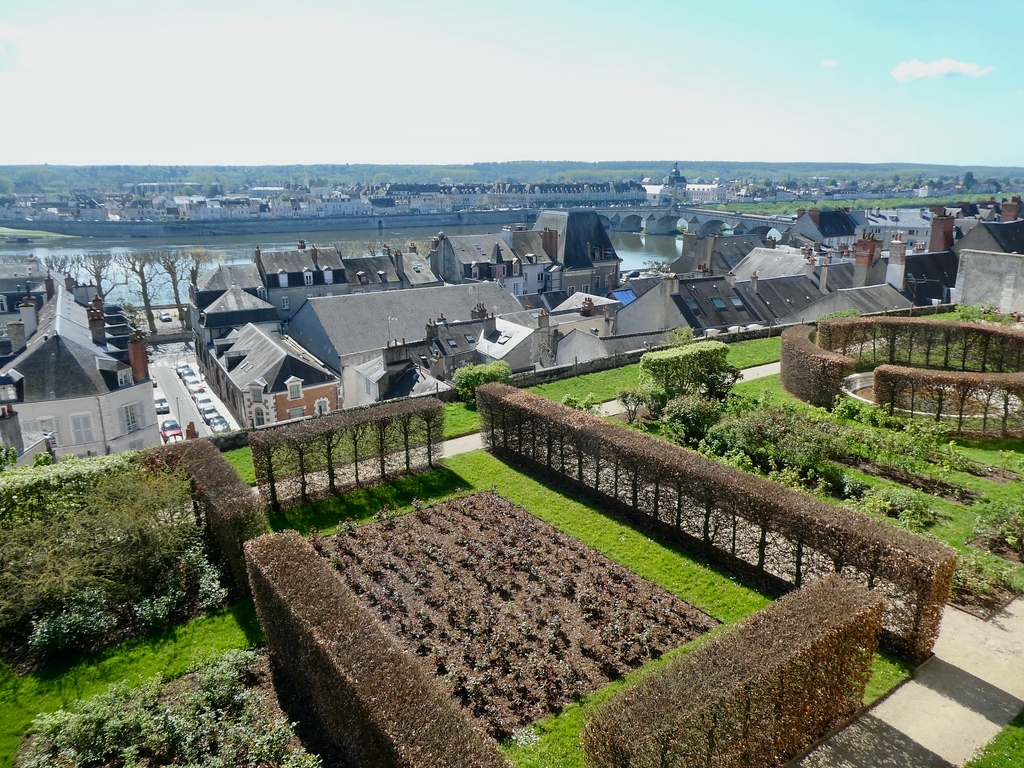 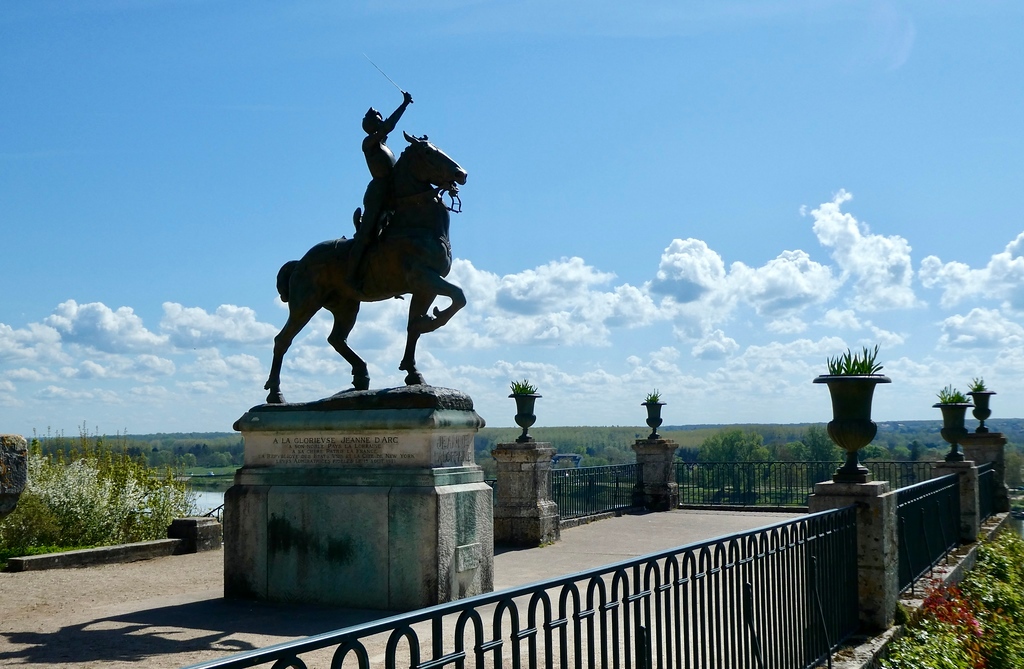 A historic sign near the entrance to the gardens gave a glimpse into just how much power the church had in those days. The Bishop’s palace was destroyed in WWII, and the city built a structure on the site where the City Hall is now based.

In 1697, the bishopric of Blois was created to strengthen the role of the Roman Catholic church. Niclas de Bertier, Blois’ first bishop, decided to build his palace on a plot of land with fabulous views overlooking the Loire. The designated site was not easy to develop. The town walls had to be opened up, several houses were demolished and, more importantly, a number of roads linking the upper and lower town were blocked off. 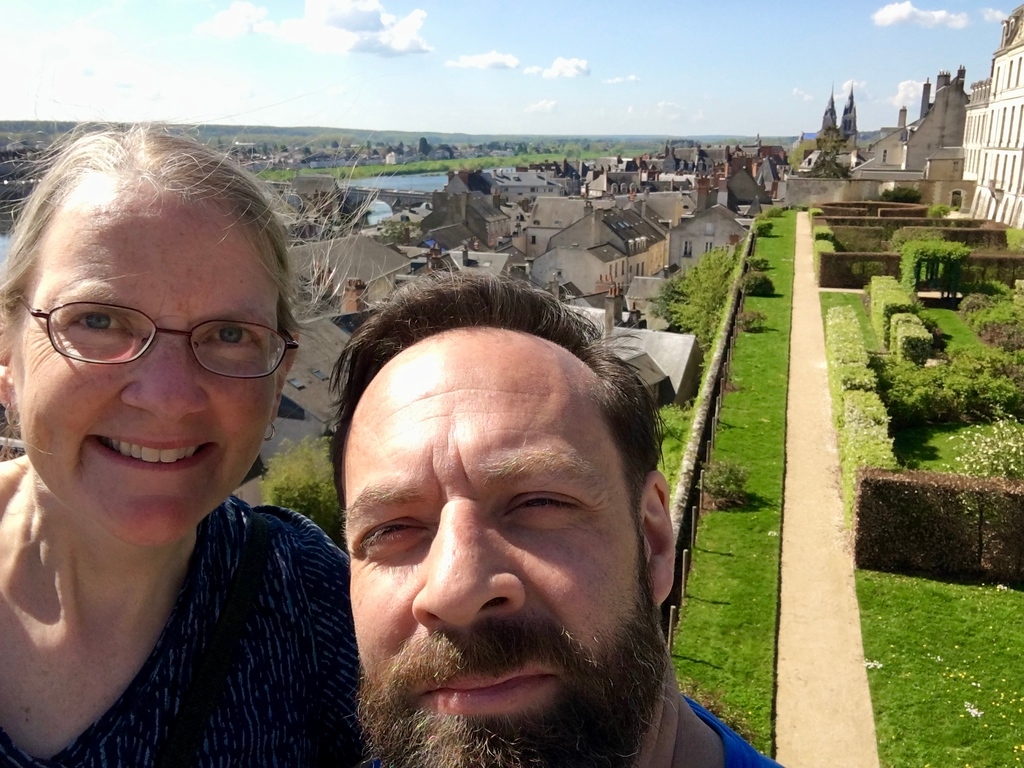 From the view point we meandered around some new streets back to the river front. We ended up criss-crossing through the city numerous times, sometimes finding new sights and sometimes revisiting corners previously seen – but always welcome to see again.

Saint Jacques Fountain
“The fountain was offered to the town by Louis XII and was the “Local Well Fountain”. It was later renamed “St James’ Fountain” because it was leaning against a collegiate church dedicated to the saint. The church no longer exists.
Now apparently half underground, the fountain actually stands on a level with the old street. The difference in level comes from successive projects to raise the street, especially in the 19th century.
The fountain’s water supply has always come from “Le Gouffre” (the Gulf), a natural reservoir that collects rainwater and seepage. it has been used since Roman times to provide the town with a water supply.”

Intriguing chess board set up

Hundreds of birds roost on a sandy island in the river 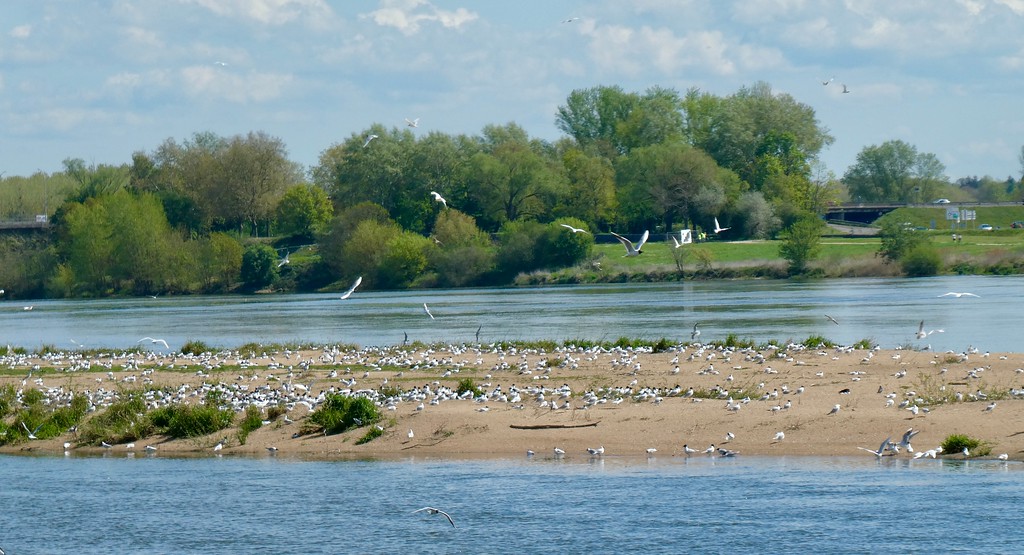 This little one was waiting for feeding time

It was really nice that the city had informative plaques at many historic locations. For some, I took photos of the information as well as what it was describing. Like this one.

“This is a mediaeval house with a late 13th century vaulted cellar. It underwent alterations in the 16th century when a wooden straight fight staircase was built. The galleries built one above the other in the Italian style were decorated with basket arches…” 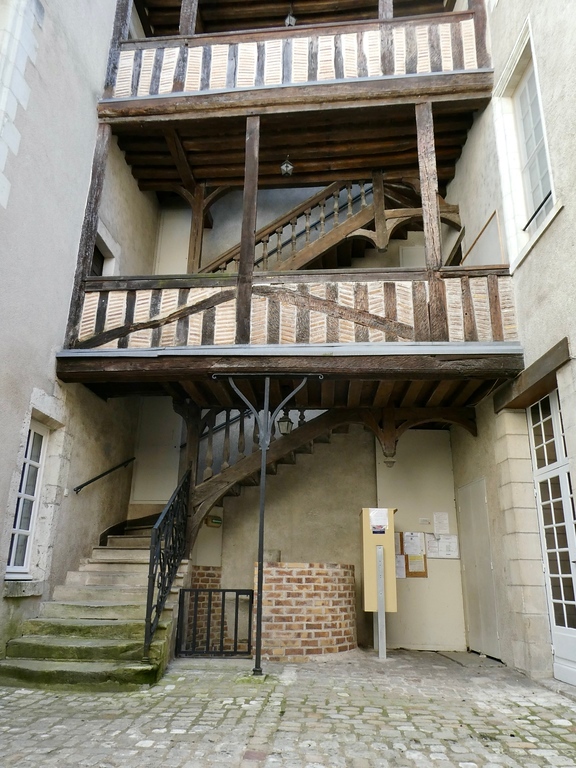 Another signed had this interesting tidbit of information:

“The air raids of 16th and 17th June 1940, aimed at the bridgeheads, destroyed many of the buildings in the town centre… The reconstruction, based on a new town plan passed in 1942, made use of the new vistas of the château and the Loire cleared by the bombing, rather than retaining the old roads, etc. Certain buildings were sacrificed to allow this more modern approach. Yet because of the way the 1942 plan integrates into the urban landscape, it is considered a fine example of what can be achieved and is covered by the same preservation act as the Renaissance town.” 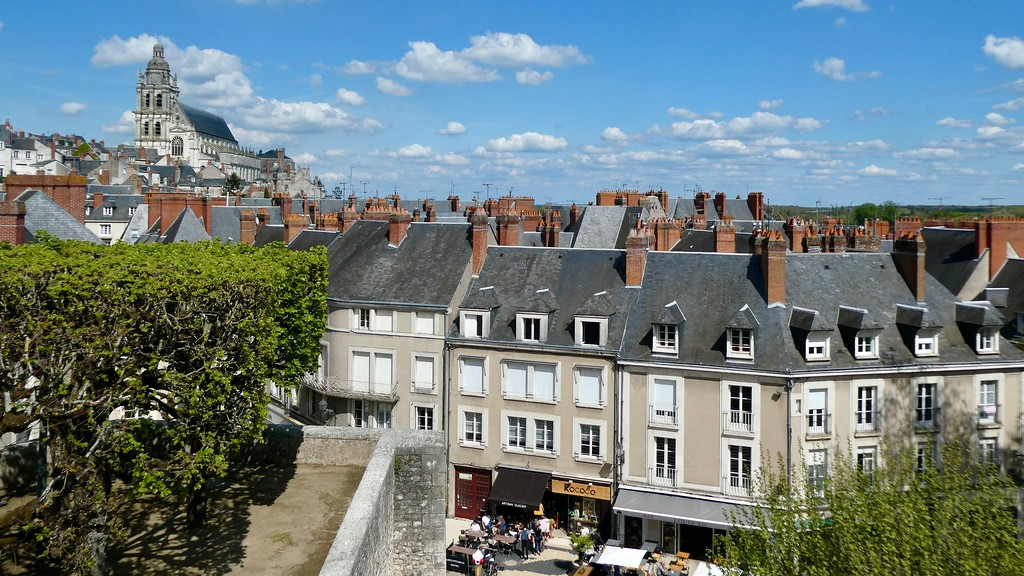 We were on the way to the castle, via a lovely stone staircase that rose from a tree covered square. This city had so many little surprises! 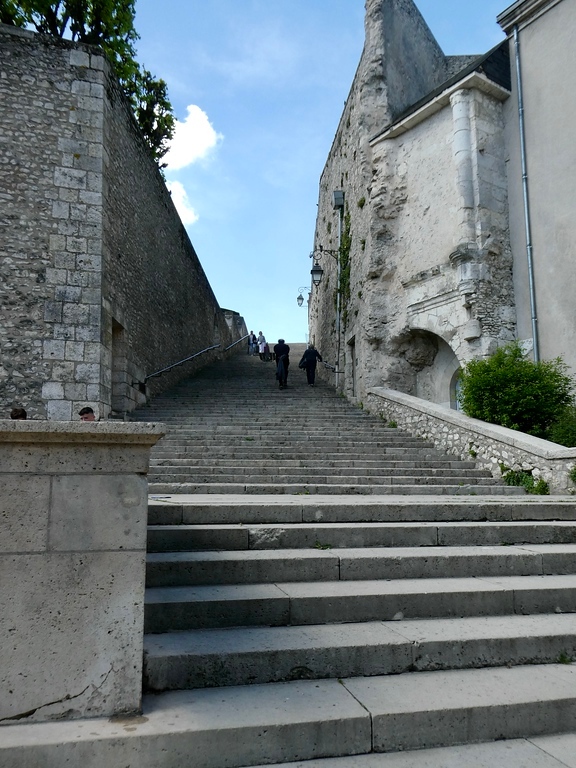 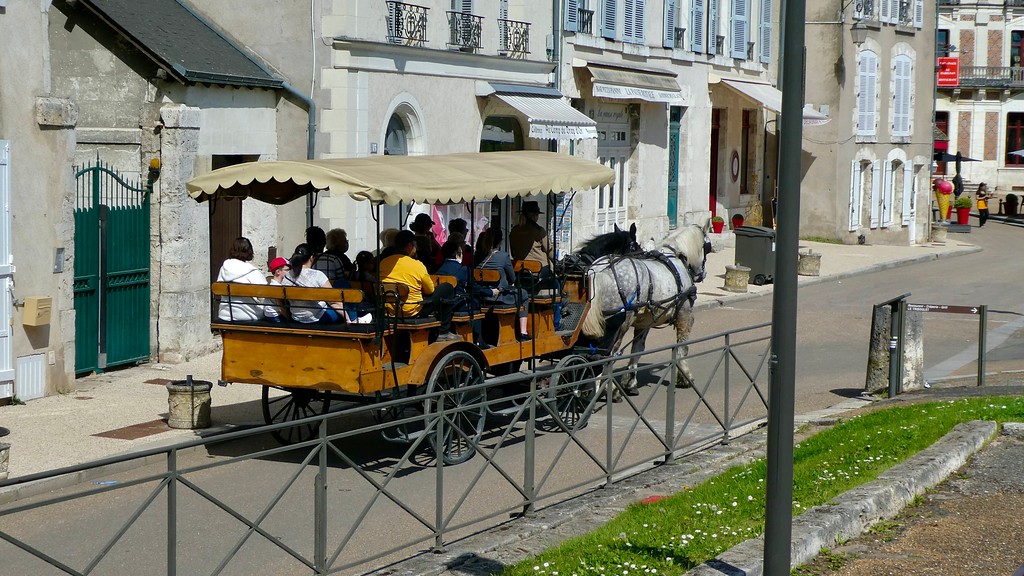 We had reached the front of the castle

The area in front of the castle was wide open and we meandered around to see what we could see. 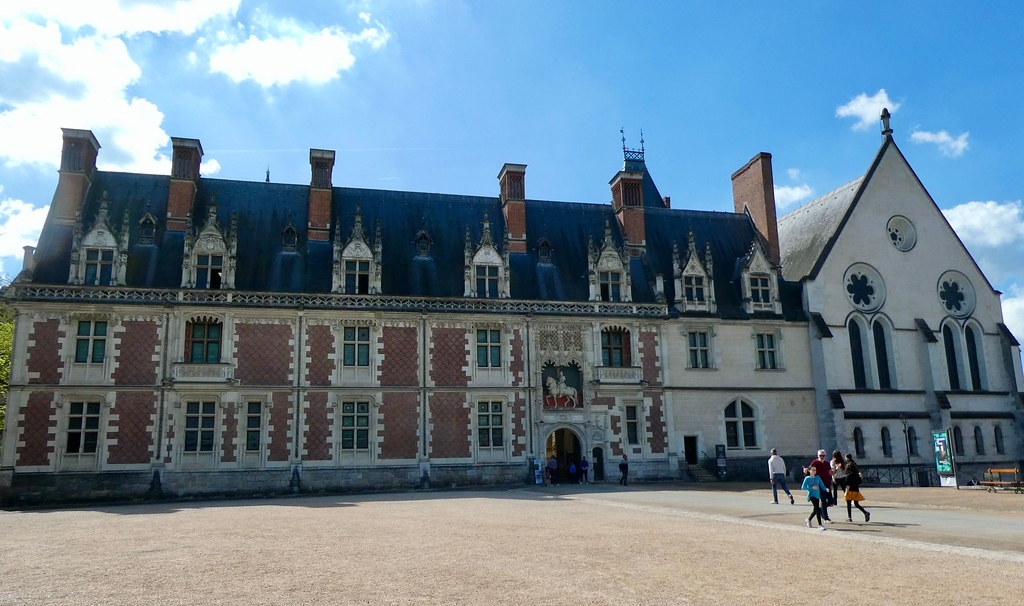 The castle has a long history, most of which just runs over my head as it is full of Kings with Roman numerals after their names. Needless to say, it is a very long history that has a start year of 854. I recommend checking the (wiki) link, as it lays out the timeline nicely.

And while studying the front of the castle I realized an error I had made when we first started exploring Blois. When we first arrived I saw the brass markers and thought “Cool! Hedgehogs!”

Silly me. It is a porcupine, the royal symbol of Louis XII. Not nearly as much fun, but it made more sense. Sort of.

While I like castles, I generally find that “they all look alike on the inside”. Ok, not really. But close enough that unless it is really interesting or convenient, we don’t make a huge effort to go inside. So we peeked through the gates at the inner courtyard and we were satisfied.

“By the time of the French Revolution the immense castle had been neglected for more than a hundred and thirty years. The contents, many of its statues, royal emblems and coats of arms of the palace were removed. In a state of near-total disrepair, the Château of Blois was scheduled to be demolished but was given a reprieve as a military barracks.” – Wiki

And to think that they were considering demolishing this! 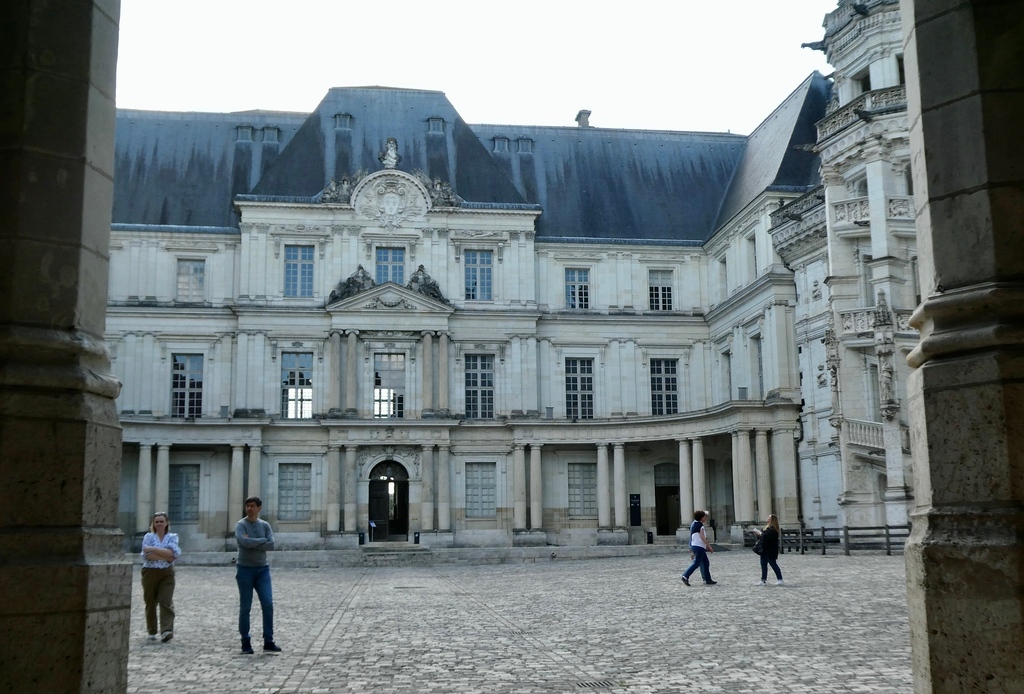 Enough of the castle grounds, we slipped down a back stairway and explored some more as-of-yet-unseen corners of the city.

The columns are so big, there’s almost no room for a congregation

Who you lookin’ at? 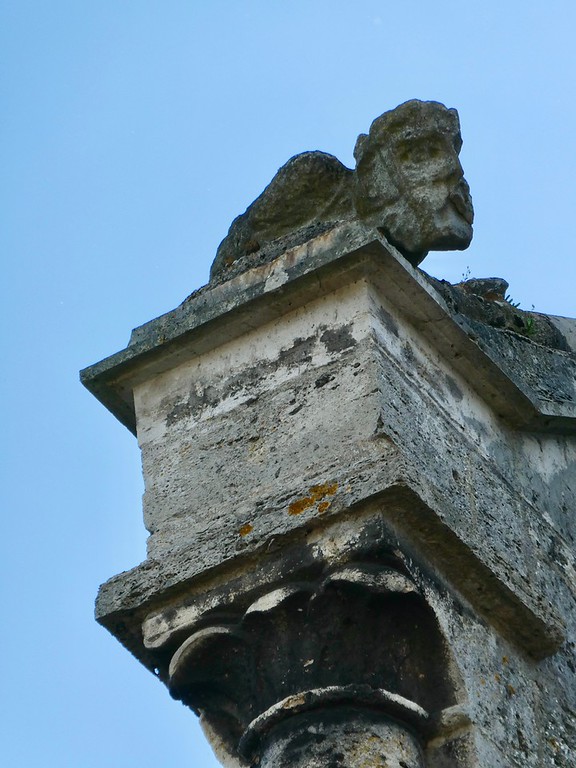 We eventually found a bite to eat at a restaurant called “L’annexe“. It was early for the local dinner culture, so our restaurant choices were more limited than we had expected. Still, the burger I had was good and Dan enjoyed his meal as well. It is an uncomfortable feeling, however, to be the first ones seated in a restaurant. At least I knew that everything would be freshly prepared! 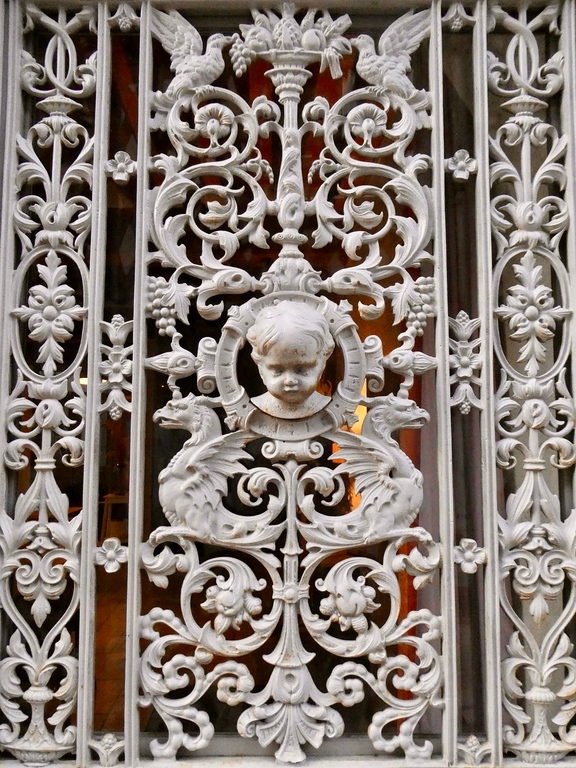