Our room was good – not great, but good. Most importantly, it was quiet. We packed up all of our stuff and rolled quietly out of town. It was a foggy, cool morning and it was time to ride!

Eventually the sun burned off the fog and we slowly warmed up. Have I ever mentioned how happy I am to have heated grips on my motorcycle?

Dan and I have talked often of bicycling along the French canal system – it is surprisingly extensive and relatively unknown compared to the UK’s network of waterways. We just have to get off our motorbikes and take the pedal bikes for once! 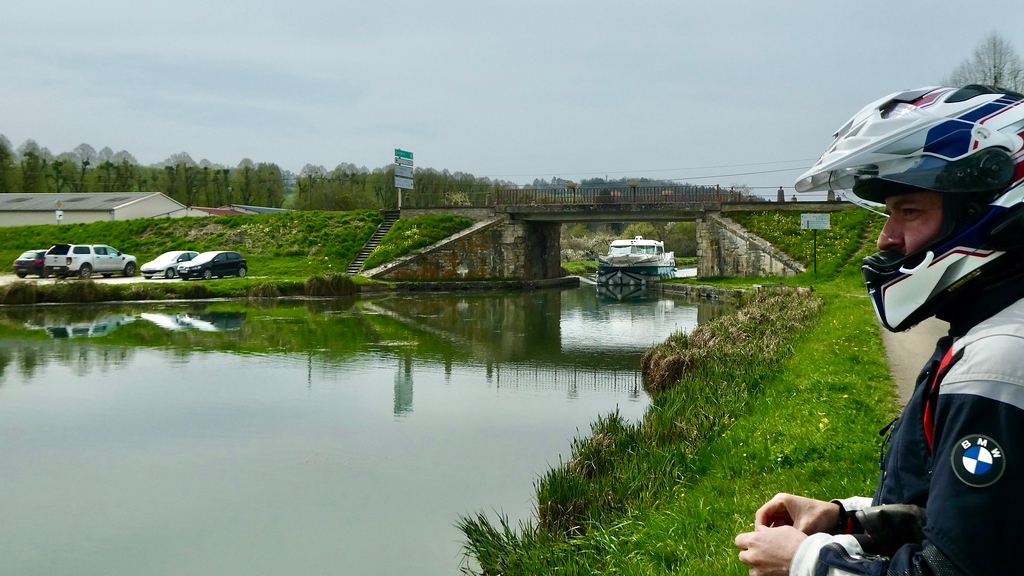 At one point we were stopped at a construction zone and had to wait for an escort vehicle before we could proceed. As we sat there watching the current sign holder text madly on his phone, we could see the construction vehicles chugging along on the far hillside. Eventually a truck made its way towards us, half a dozen cars trailing it like ducklings with their Momma. As the lead vehicle reached us, a guy jumped out of the still-rolling truck and the driver horsed around by not quite stopping and pretending to run into him. It was a shift change, and after the rest of the crew disappeared again, the new sign-holder started up a conversation with Dan. Between the helmet, ear plugs and quick French, this went right over Dan’s head. Finally the sign guy gave up and said in clear English “Nice bike!” They both laughed and Dan said “Thank you!”

Once we passed out of the construction site, it was a lot of riding through fields and farmlands, interspersed with the periodic colorless village. 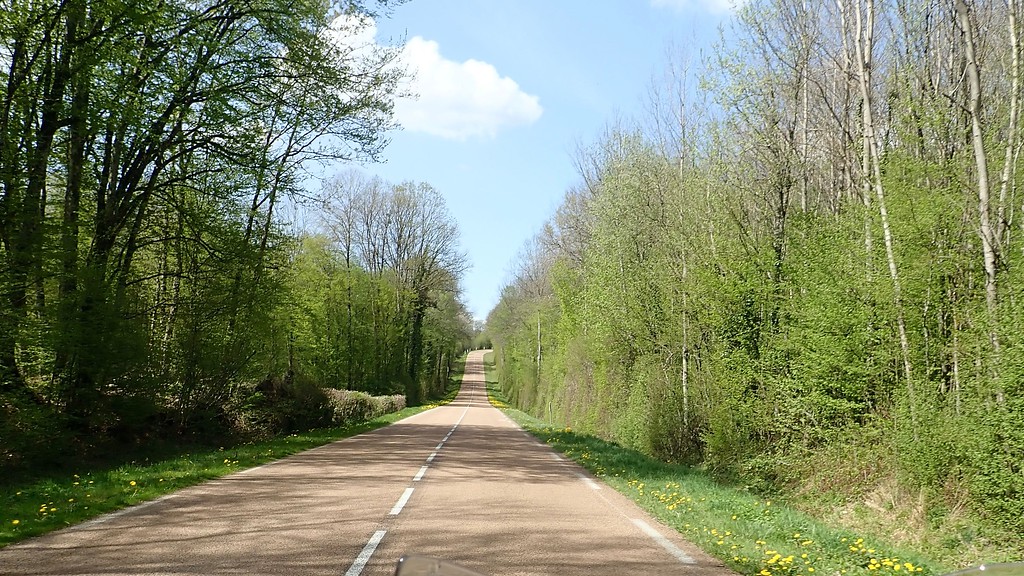 The highlight of the day was probably my brief sighting of a fox slipping into a rape field, and a pheasant trotting down the berm as we neared. I always like looking out for the wildlife, and the variety of birds I had seen so far had been delightful.

While we had been taking periodic breaks, when I saw this building hidden in the forest just off the road I asked Dan if we could make “one more stop” and check it out. And then I insisted, pulled over and turned around. I would not be denied! Not that he was going to deny me anyway. 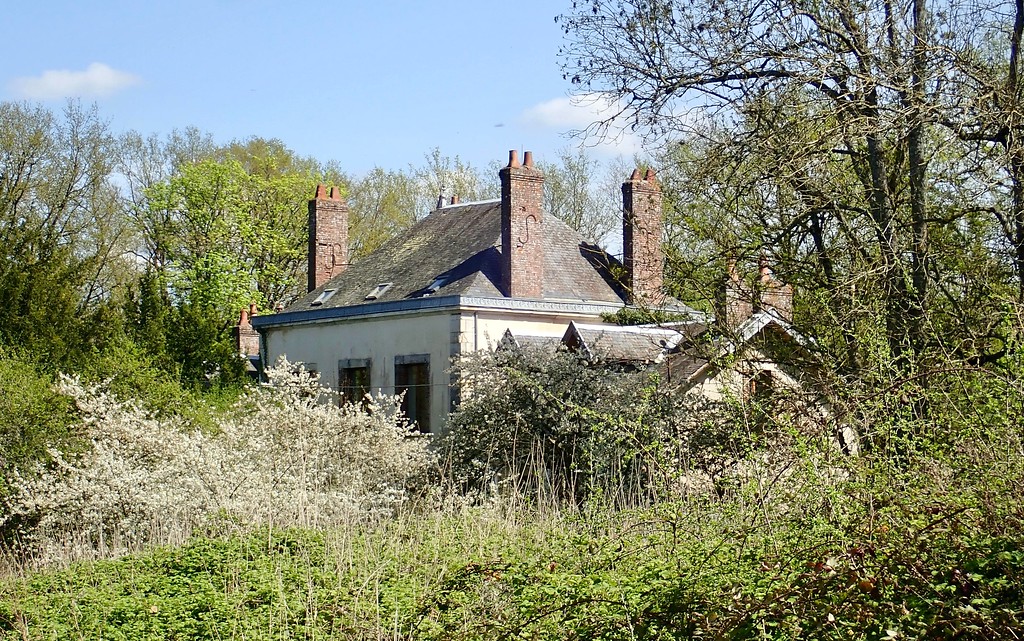 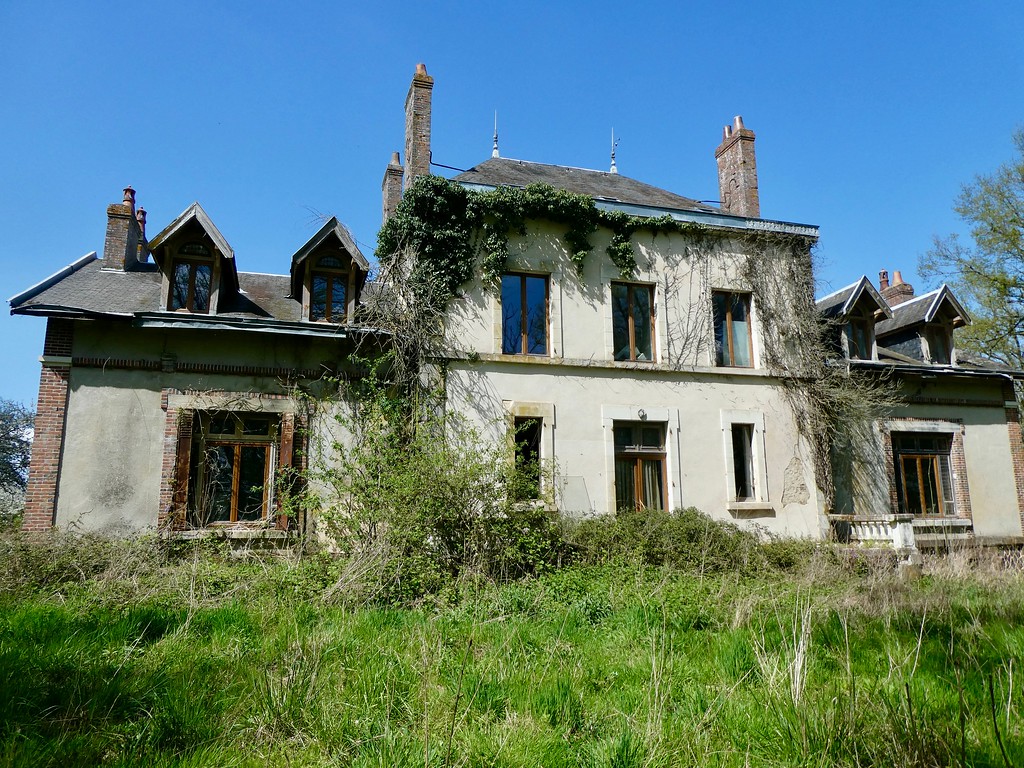 While the structure had clearly not be tended to lately, it also was not entirely abandoned.

We had circumnavigated the building site, looking through the windows but not going inside. Despite the massive overgrowth, it was obvious that someone was doing some work on the building. We speculated on the history of the building, the future of the building, and what we would do with such a building.

We were back on the road, through more spring-green forests and increasingly interesting villages. The architecture went from “boring and brown” to a colorful variety of designs and building materials. The spring blooms and flowering trees filled in the spots that were usually void of anything green and growing. It was a breath of fresh air – so to speak. 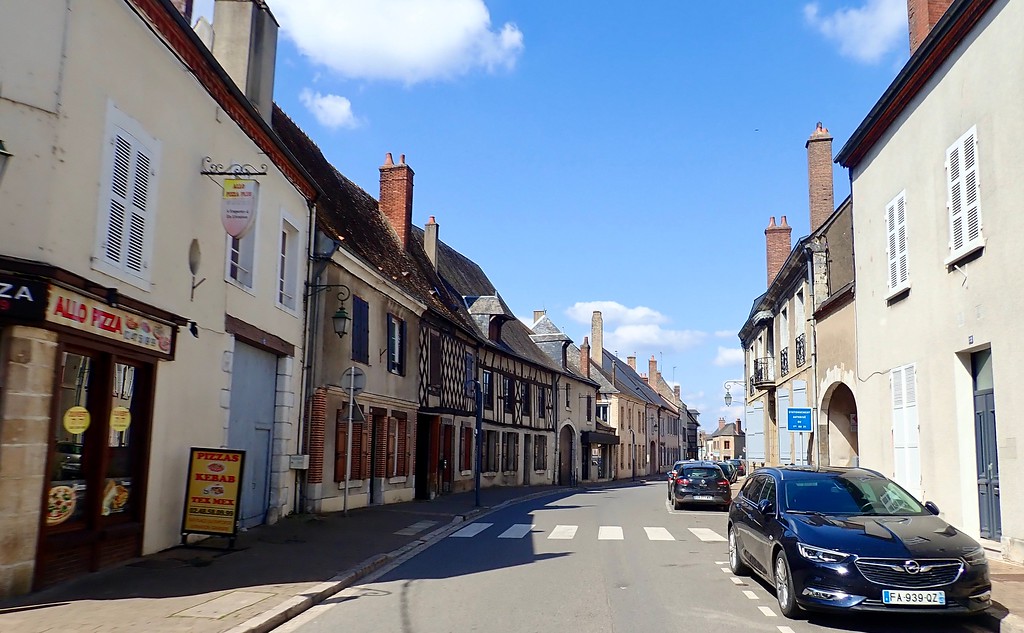 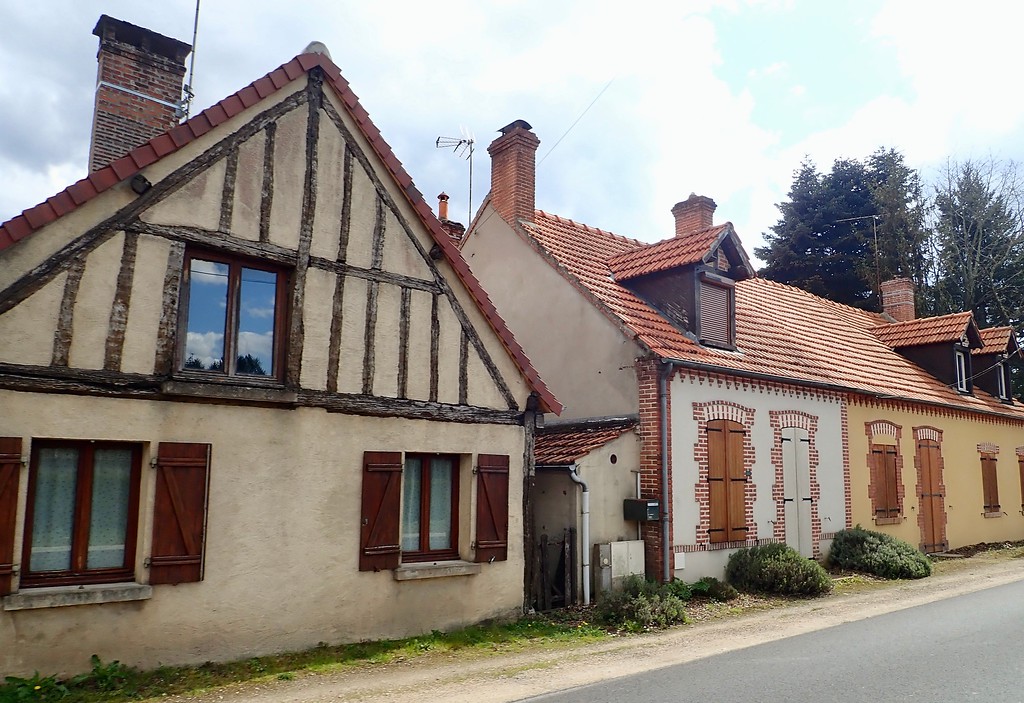 We had arrived in Blois – our destination for the next three nights. I had known nothing about the Loire Valley before this trip and in my last-minute research, I stumbled up on the historic city of Blois. It appeared to have everything we were looking for: history, a central location, and some easily accessible walking paths.

Our AirBnB instructions weren’t the easiest to follow so I sent Dan off in search of the address and the lockbox keys while I stood by the bikes. It was an interesting place to get to the feel for the city – and it was surprisingly busy! 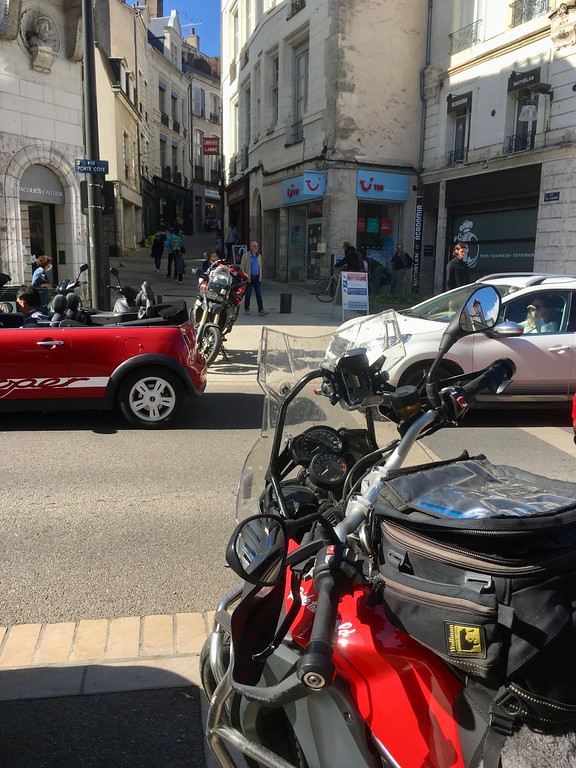 Dan finally came back with the key and the location. We weren’t far and even found convenient parking right in front of our building. I’m glad that we had packed light for this trip and were able to carry our bags and gear up to our room in one go. And good thing, too, as it was fifty three exterior steps to the building door, and then 46 more stairs once we got inside.

Our room is on the top floor

Our bikes, right below us 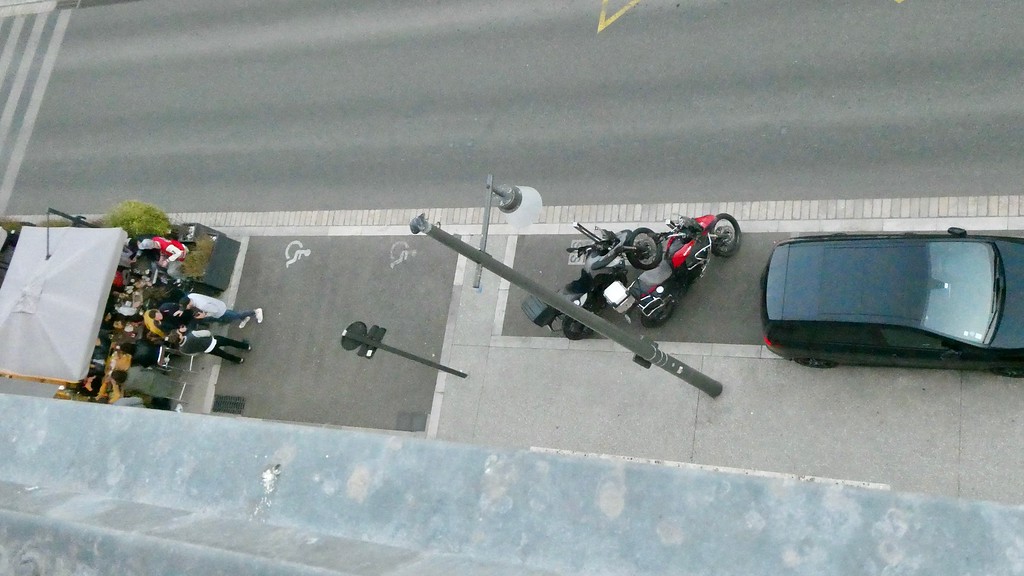 Our gear and bags had been stowed, we put on comfy clothes, and it was time to see what Blois had to offer. First, a blurb of historical facts:

“First mentioned in the 6th century by Gregory of Tours, it was by the early Middle Ages seat of the powerful counts of Blois, from whom descended the Capetian kings of France. At the end of the 14th century, Blois was acquired by Louis de France, duc d’Orléans. Joan of Arc set out from Blois in 1429 to raise the siege of Orléans. In 1498 the son of Duke Charles and grandson of Duke Louis succeeded to the French throne as Louis XII. He had been born in the château, and, from his coronation until the end of the 16th century, Blois was almost a second capital of France. Under Henry III the States-General twice met there. At the second of the two meetings most of the deputies supported the Catholic League and its leader, Henri de Guise, who had been plotting with Spain to take the throne. Henry III, fearing deposition, had Guise murdered on the second floor of the château, December 23, 1588. The queen mother, Catherine de Médicis, died a few days later in a room just below. Marie de Médicis was imprisoned there by her son, Louis XIII, but escaped after two years of luxurious confinement. In 1626 the same Louis sent his brother, Gaston de France, duc d’Orléans, to Blois, inviting him to redesign the château. The classical wing designed by François Mansart was the result.”

So – just a tiny bit of French history was at our feet! We were excited to get out into the city and start exploring all of its nooks and crannies.

First stop was down the street and around the corner to the castle (which I found out later is visible from our room). We wanted to continue to get our bearings, so we left the castle and continued to wander the streets that stretched from our rooms to the river.

One side of the castle – and not the main facade! 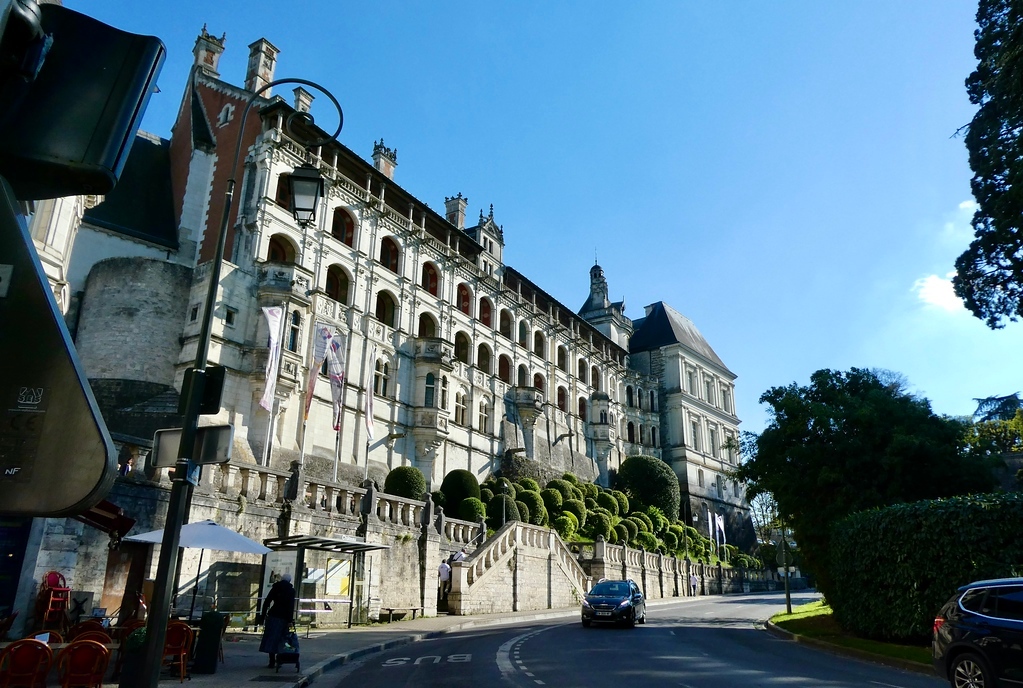 But then we went down another street and found a nice place to stop and have a drink. 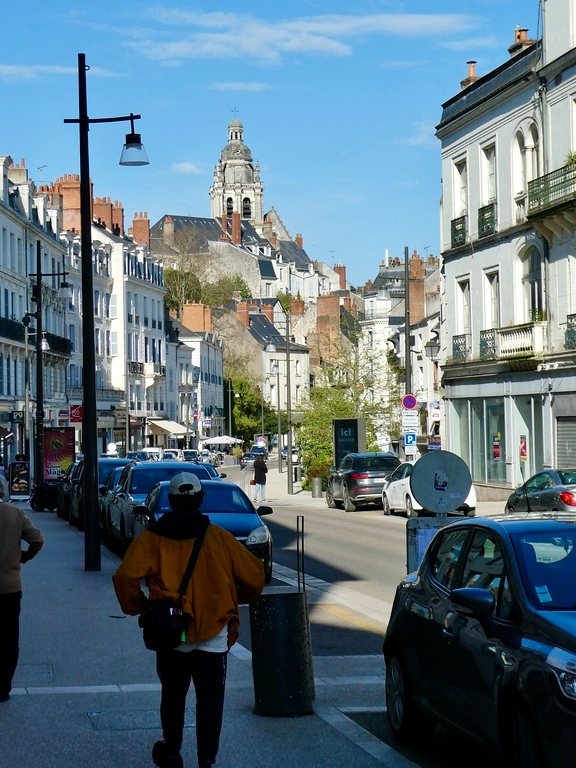 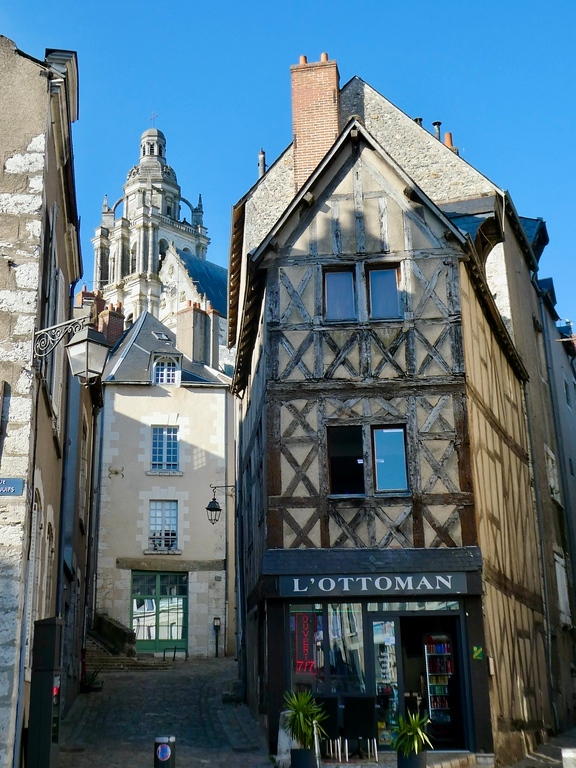 The many levels of Blois

After a quick bite we headed away from the river and up the hills above our room. Every street was an adventure and constantly provided new things to see. So much history packed into one place – how had I never heard of this town before?

Blois Cathedral in the fading sun

A rare preserved example of wood carvings on The Acrobats House, one of the oldest houses in Blois

“Maison des Acrobates/The Acrobats House looks as charming as it sounds. It was listed as Monument Historique in 1922. The characters clothes have been put in the period before 1480, this is confirmed with the rings of timber dated around the 1470’s, during the reign of Louis XI. The façade of the timber framed house, features various characters, from tales and fables, carved from wood.” – TripAdvisor

Detail of some of the carvings 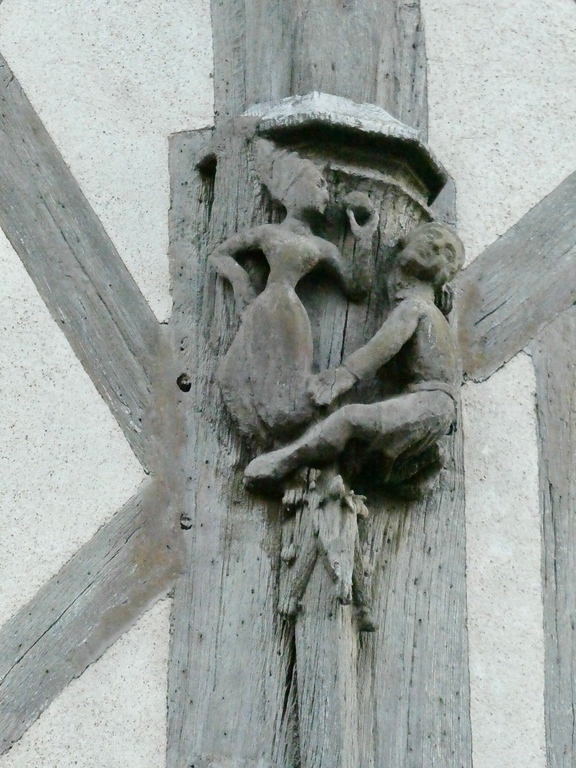 Quiet streets at the end of a great day

We knew that we had two more days to explore Blois and all that it had to offer. We settled back into our room to plan more carefully what we wanted to do with our time. Two days is more than we give most places, so I wanted to make sure that we did it right!