I heard the rain fall heavily during the night and wasn’t sure what would greet us in the morning. I rolled out of bed and pulled the curtains aside: the clouds were low, the air damp but there was no active precipitation. Let’s go!

Matt needed a little extra push after his late night out but he was quick to get ready at least. It didn’t help that with Day Light Savings we “sprung ahead” an hour, either. We packed the bikes as the sun promised to come out and brighten the day. However, as we left Carcassonne behind, we left the sun behind as well. It was a cold, damp morning and I was once again thankful for my heated grips and electric vest. Good thing that Matt is young and can withstand such inconveniences.

There is a system of canals that run through France, rather like the more well-known ones in England. I still think that it would be pleasant to float our way down the canals, going through the numerous locks and seeing the country from yet another perspective.

Canal visible along the roadside

One of the many locks on a French canal

We left civilization behind. We rose into the hills and the clouds, riding through forests and fields. Unfortunately, the temperatures didn’t rise as well. It hovered around 6C and it never got much higher. It was a cold that crept into the bones. 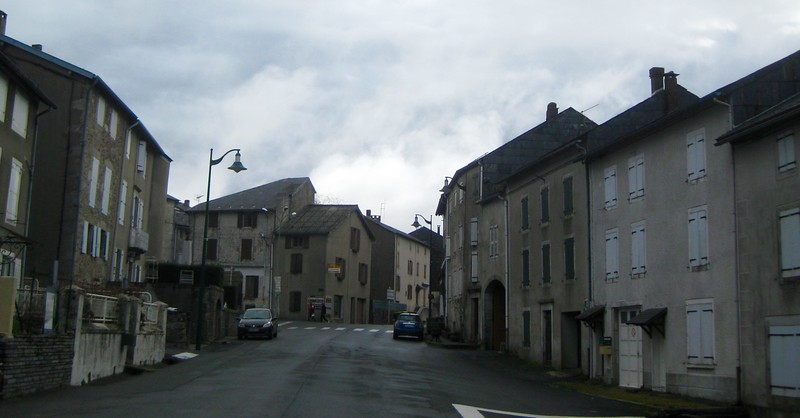 The temperature kept going down. I was nervous about ice on the road as the BMW flashed a warning of 2.5C. I rounded the corners slower than I wanted to and wished that I was taking this road in warmer and/or drier conditions. We passed a few homesteads: two or three buildings clustered together near open fields. There wasn’t a lot going on along this road and we had it to ourselves. 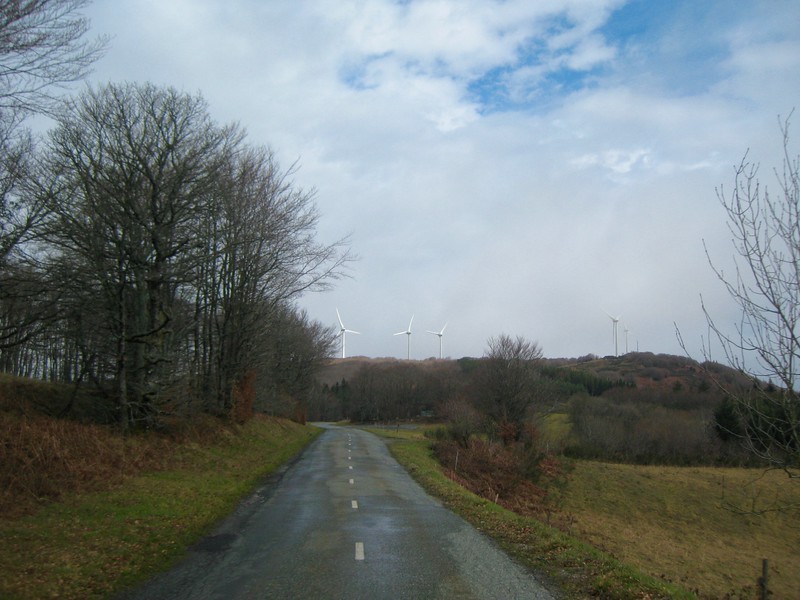 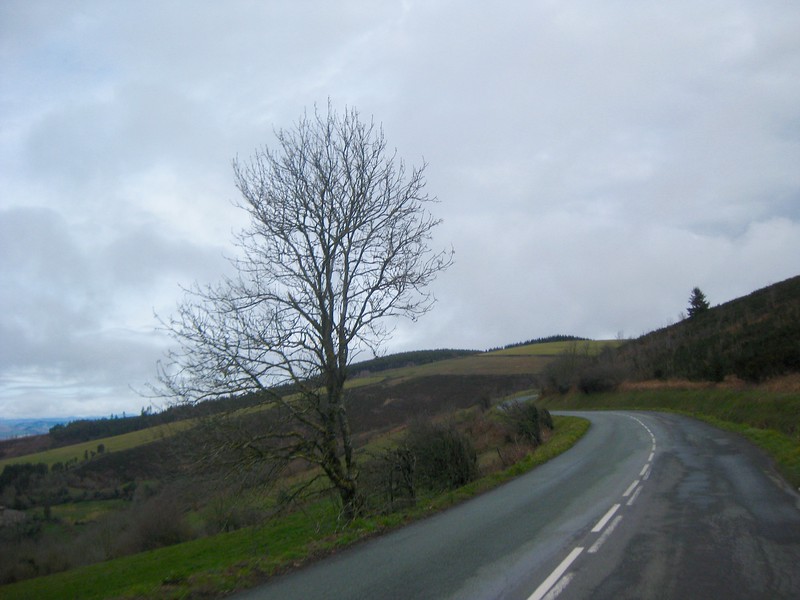 We had left the forests behind and were now in open country. The hills unfolded before us, the rolling fields criss-crossed by stone walls that made me think of our trip through Scotland. The temperature had moved back up to a less threatening level and we were able to pick up the pace a bit. It was a good road. 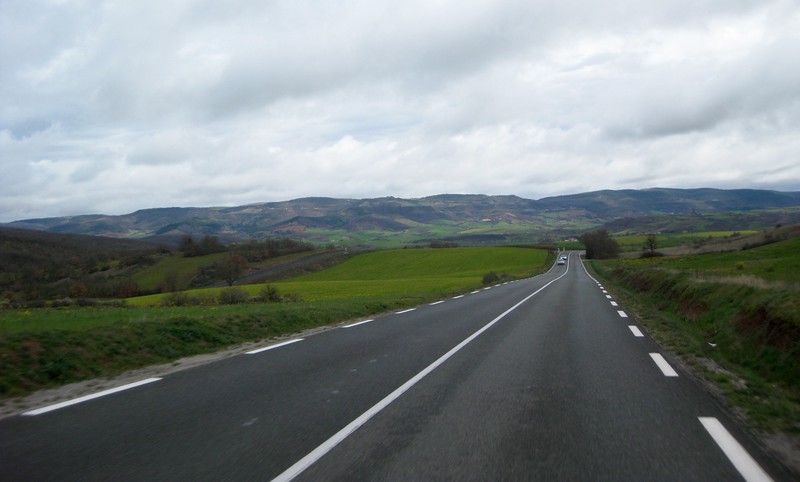 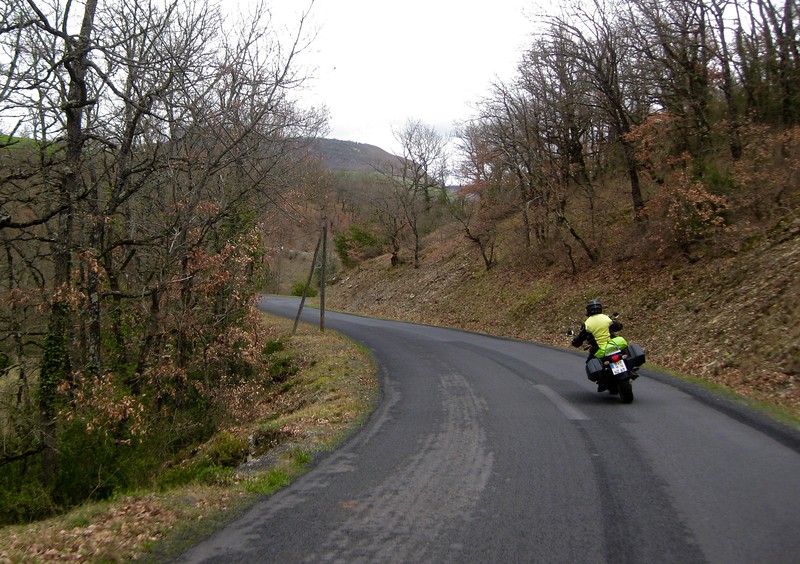 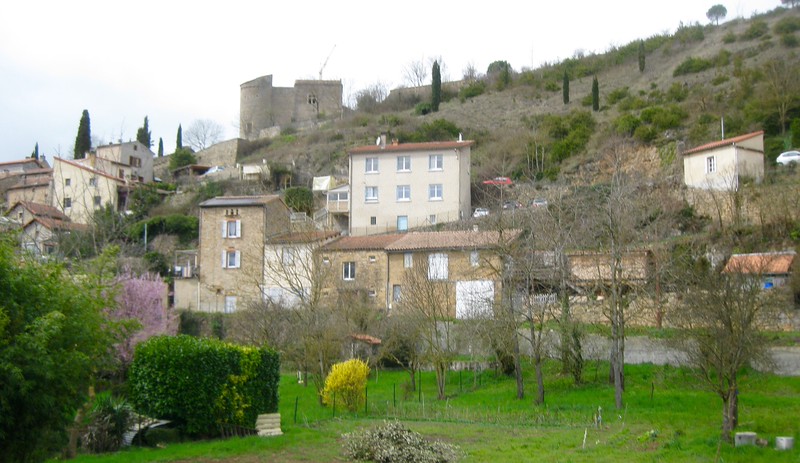 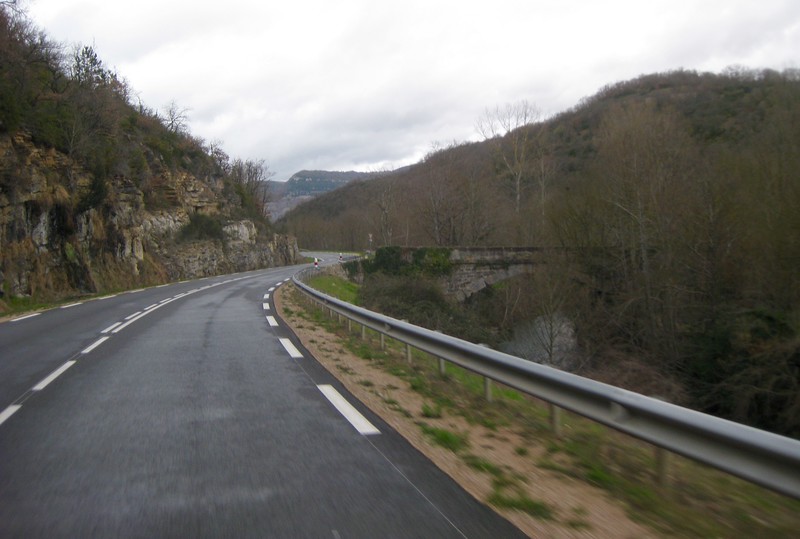 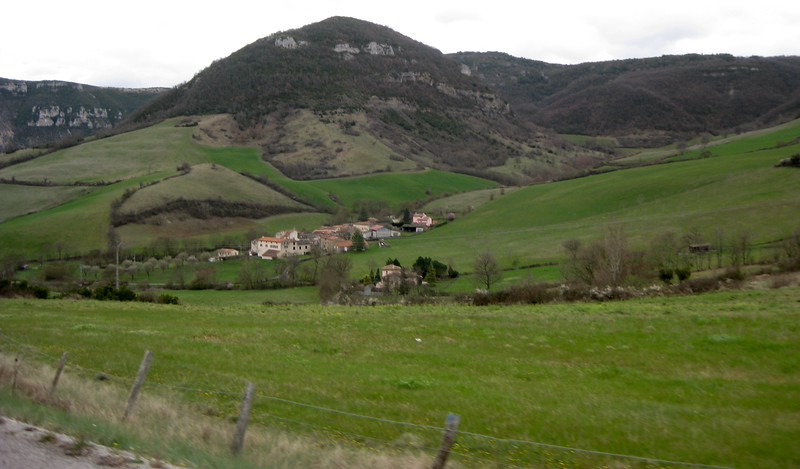 And now one of the key reasons I was leading us through these tiny backroads: The Millau Viaduct. When I realized just a day before our scheduled departure that we’d be so close, I quickly added it to the itinerary. The guys were thrilled at this late addition and we made a stop at the visitor center below the bridge. 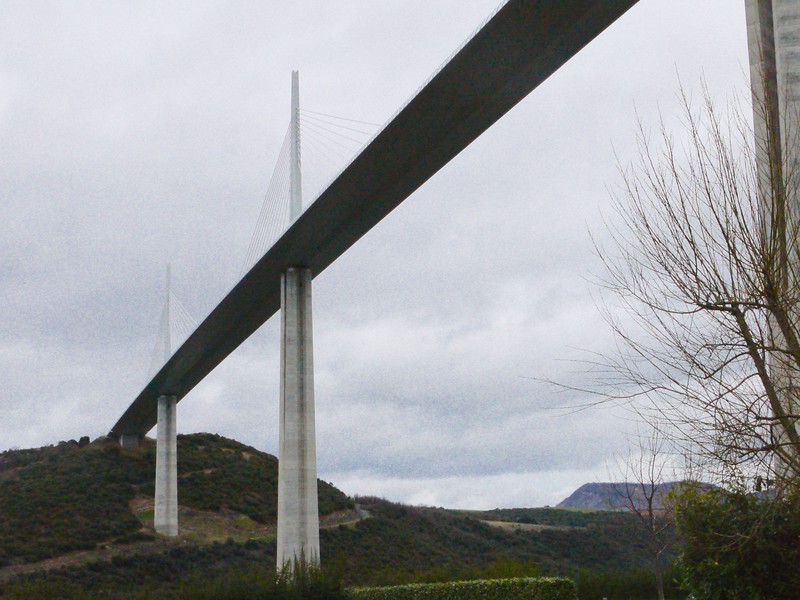 The Millau Viaduct has been consistently ranked as one of the great engineering achievements of all time and now here we were. The Visitor Center had a nice little movie about the building of the bridge, dioramas, and a gift shop complete with key chains and mouse pads.

It wasn’t enough to look up at the massive pylons: the guys wanted to ride on it, too. This entailed a long detour around a mountain, the original route through the town of Millau before the viaduct was completed. It truly is a beautiful structure. 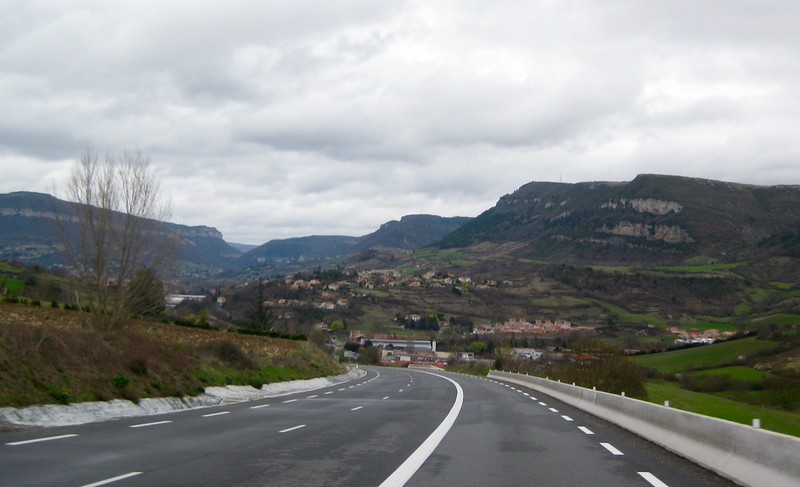 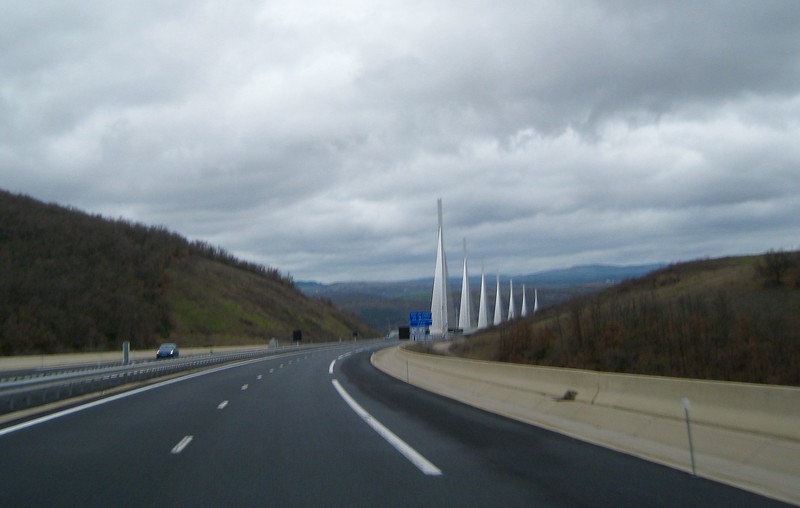 Sightseeing time was over. There was nothing else on our list until we ended our day. Matt had decided not to come back to Basel with us, but instead to continue north to Paris. Therefore we selected a random town on our map that looked to be well-placed for both of our departures Monday morning. This town was Clermont-Ferrand. But first, we had to get there! 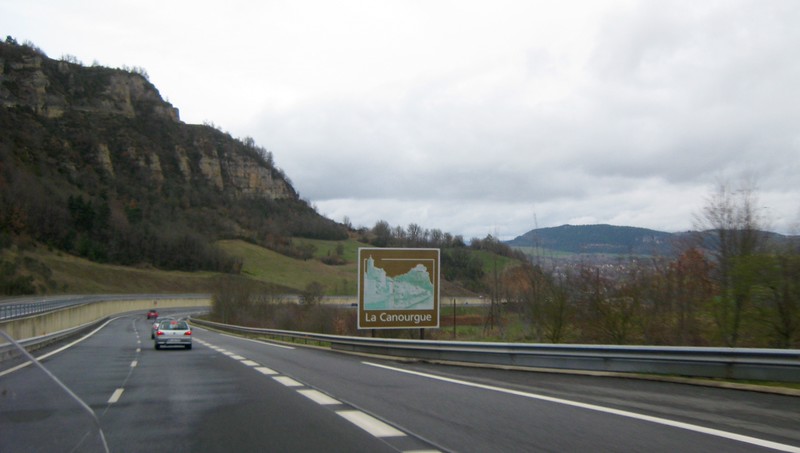 Someone else was having fun this weekend

So many hilltop towns! 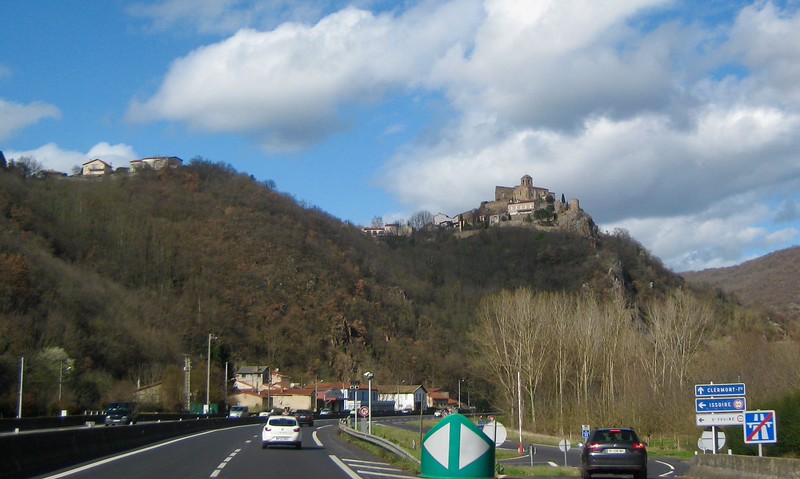 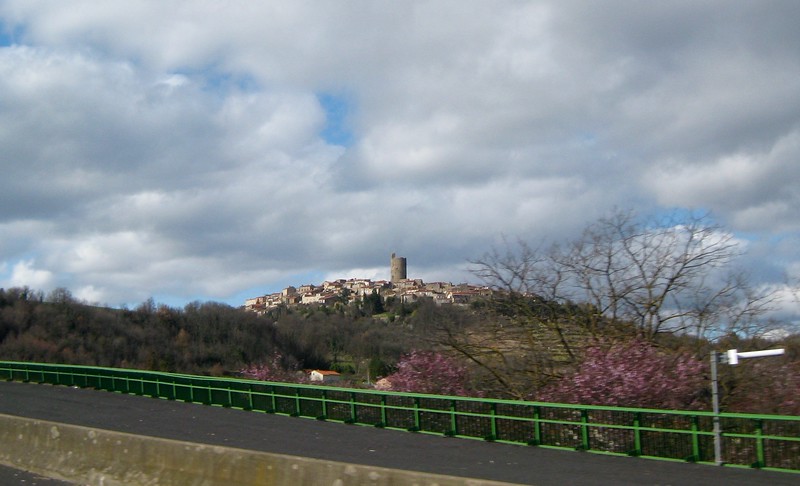 We pulled into Clermont-Ferrand with no plan. It was the first town we arrived in well before sunset and knew that we’d have time to explore. It was also the first town without pre-arranged hotel plans so we began our search. I forgot how difficult it is to find a place while traveling, but we eventually found something that satisfied our needs: cheap, clean and close to the city center.

The weather was beautiful. A little cold, but the sun was out and the streets were full of people. Time to see what Clermont_Ferrand had to offer!

Sculpted by Frédéric Bartholdi, who also created the Statue of Liberty

Detail on the theatre

Clermont is one of the oldest cities in France, but I was surprised at how little evidence I could find of this history. Sure, the cathedral stood proudly on the hill, and there were a few historic buildings from the 1800s, but anything older than that was not easy to find. The claims to fame that it does have are much less tangible: the First Crusade began here in 1096 and more recently, the construction of the Michelin factories. Neither were obvious as we explored the city’s streets. 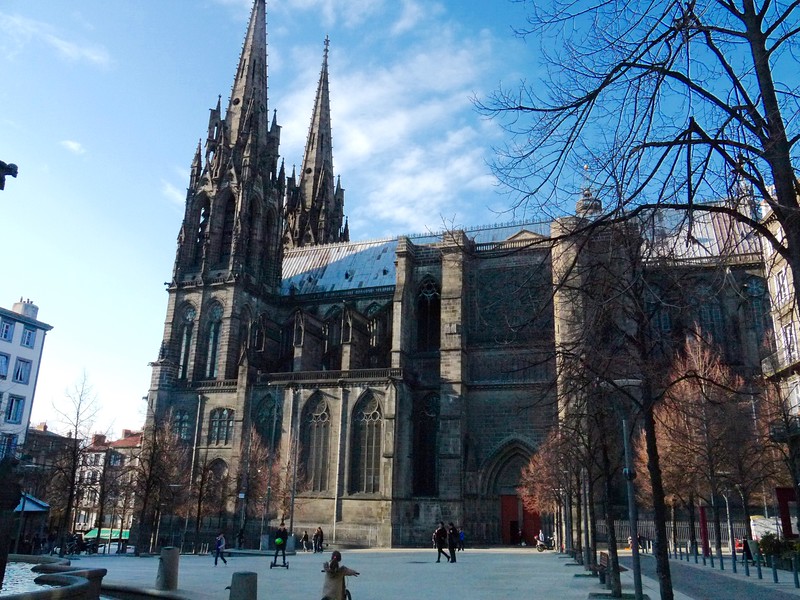 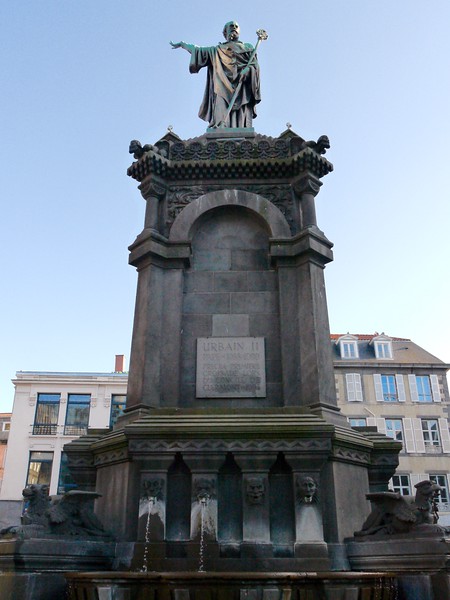 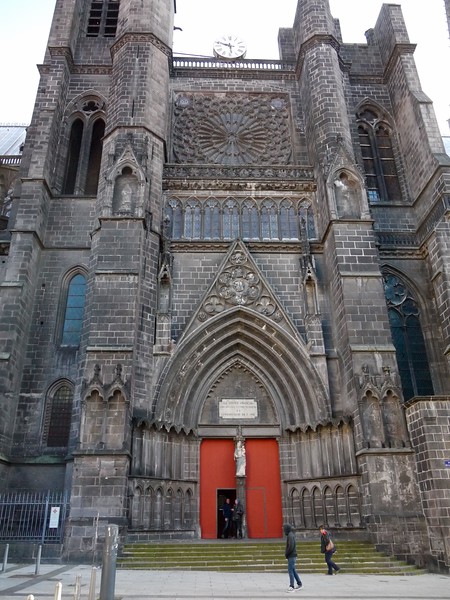 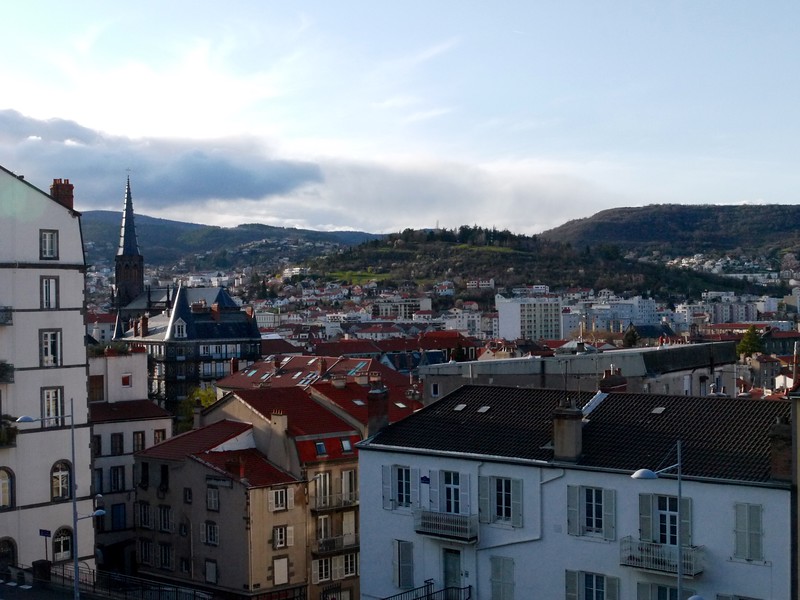 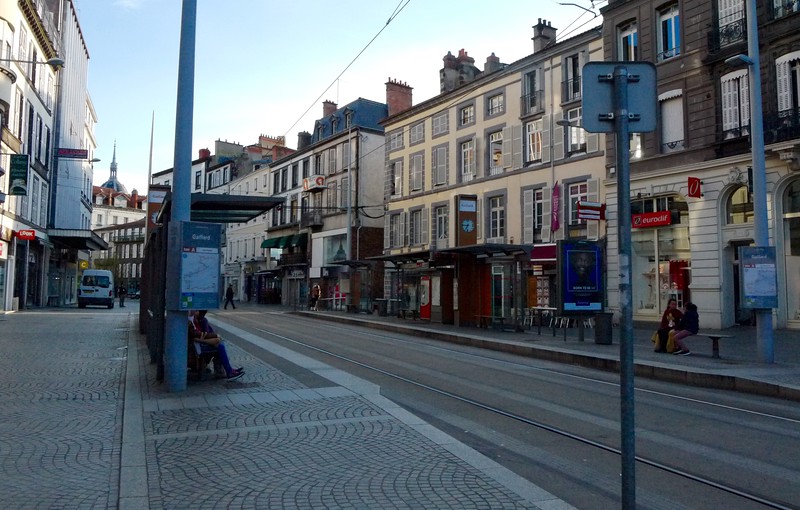 This guy jokingly wanted in on my picture, so I shot him!

We had been given a few recommendations for dinner by the hotel desk clerk and we scoped them out as we wandered around. We finally made our decision and circled back to the winner: Restaurant L’oustagou. The hostess led us up two flights of stairs and gave us a table in a warm and comfortable room. It was a bustling place and the servers rushed around making sure that everyone had everything they needed. Dan did a commendable job of translating the menu, with the notable exception that “Chevalier” was not horse, instead a fish. A simple mistake, I’m sure.

It was dark by the time we left the restaurant but it was still dry and cold. The city had lit itself up nicely and I tried to capture our return through the central plaza area as we returned to our hotel. 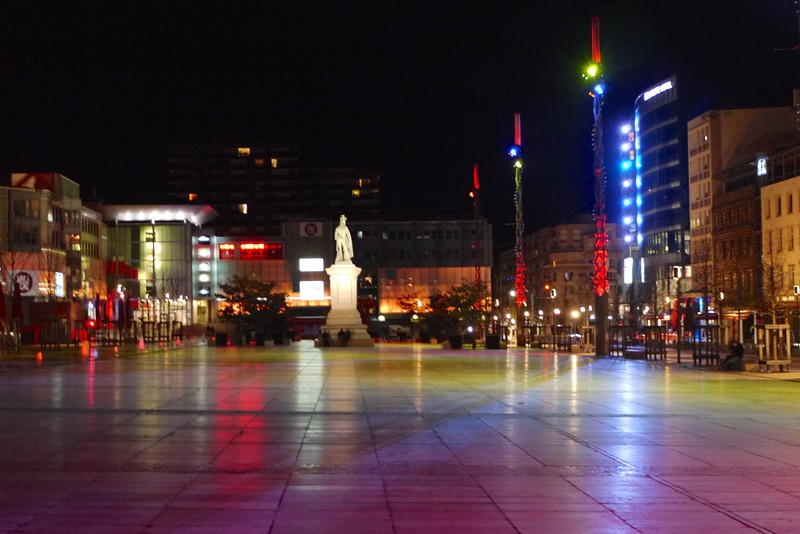 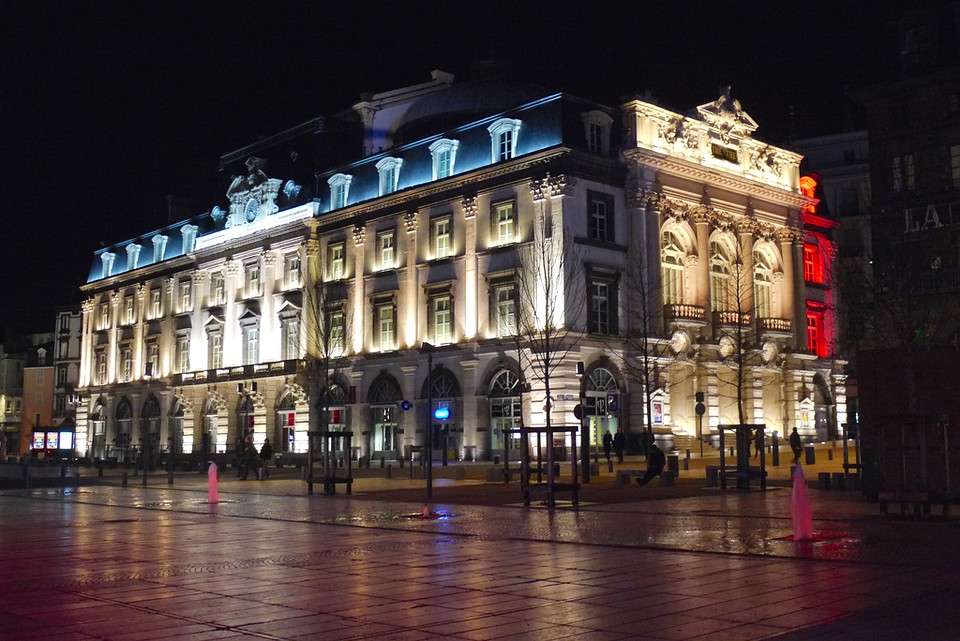 We settled into our rooms for the night, knowing that tomorrow we’d go our separate ways.