Another holiday weekend was upon us, this one being a full four days! And with me being in between jobs, I had no issues with adding an extra day. Luckily, neither did Dan. And as a bonus, my nephew Matt, who is stationed in Germany, was able to get leave as well. It was time to plan something fun!

This was the most challenging holiday that I planned to date. I had two other people to take into consideration, weather, daily distances and the fact that hotels tend to book up during holidays. I opened up Google Maps and Trip Advisor and went to town – literally. Eventually I had hotel reservations for three of the four nights and a list of “possible sightseeing options” at the ready. The weather looked tolerable and the mileage was…well, I wouldn’t mind it at least.

Matt arrived Wednesday evening from Germany, as the departure from Basel was slated between 8 and 9 Thursday morning. The weather wasn’t bad, but it could have been warmer. We packed up our bikes and headed south. My plan was to get us out of Switzerland as soon as possible, saving the roads closer to home for shorter trips in the future. We borrowed a third Sena SMH10 communication unit for Matt to use on this ride, as it is much easier to travel when we can quickly exchange ideas and requests. 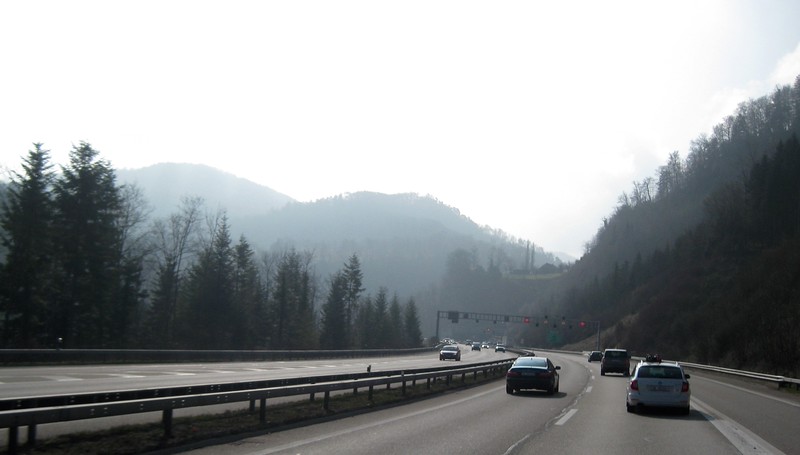 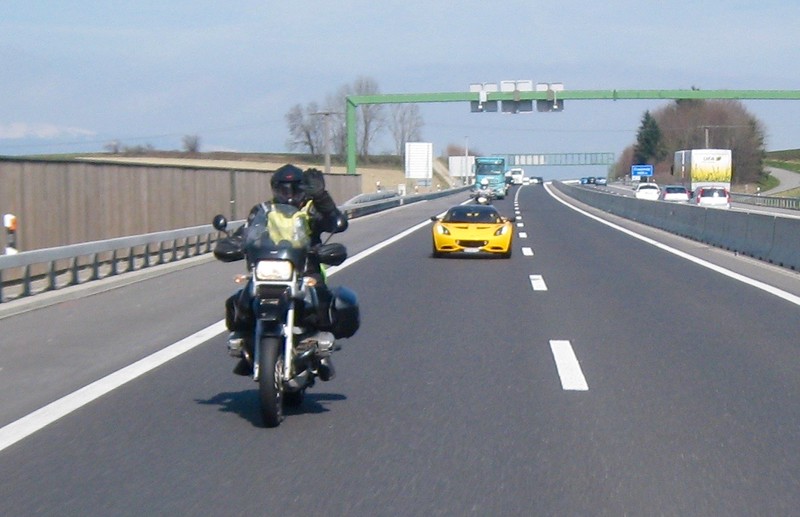 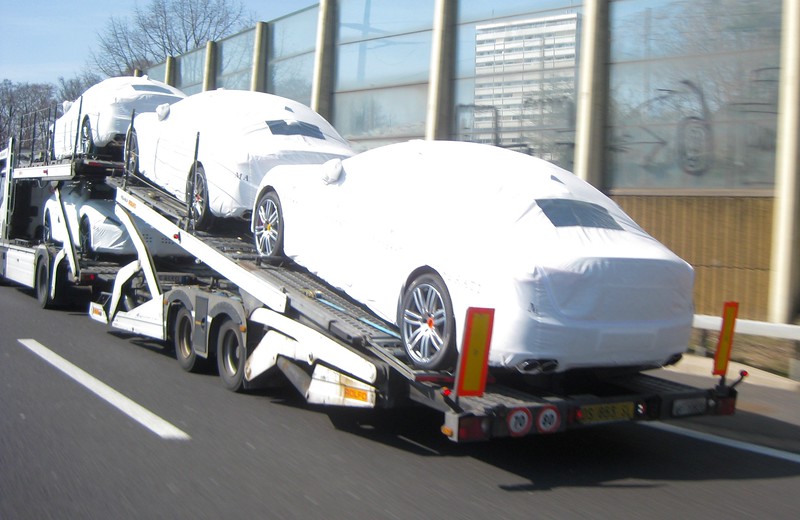 A trailer full of Maseratis

The transition from Switzerland to France was supposed to be a transition from motorway to secondary roads. Unfortunately this was easier said than done, and we ended up following the motorway for a while longer.

Matt is from Ohio. He’s seen the Appalachian Mountains, but those are the biggest hills that he’s ever experienced. Due to the thick clouds, I was sorry that he wouldn’t see the Alps today, but once we got south of Geneva, the clouds pulled back and the mountains came into view. It was fun to listen to his excitement ring through the intercom. 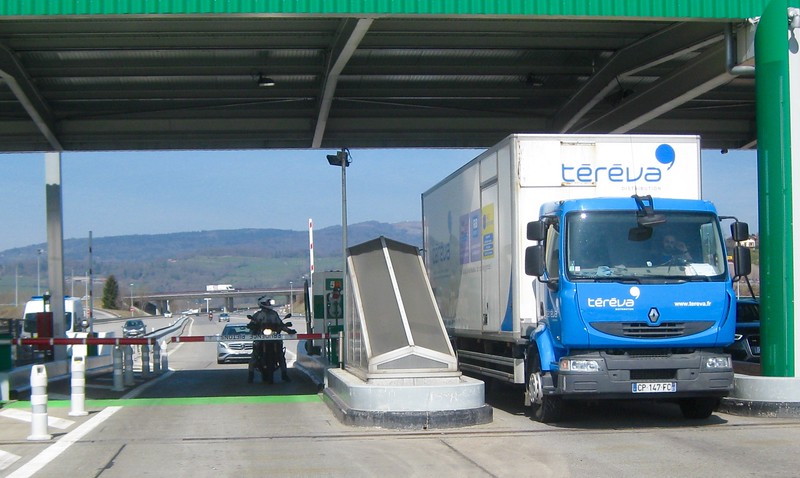 I hate toll booths on a motorcycle

We eventually abandoned the motorway and took to the side roads. The wind was harsh, constantly blowing us around, and taking the secondary roads gave us some respite. Not to mention that they were much more interesting. Matt continued his audible appreciation of the mountains, much to my delight.

Matt and Dan behind me

One of many small towns we rode through

Lo and behold! The sun came out! 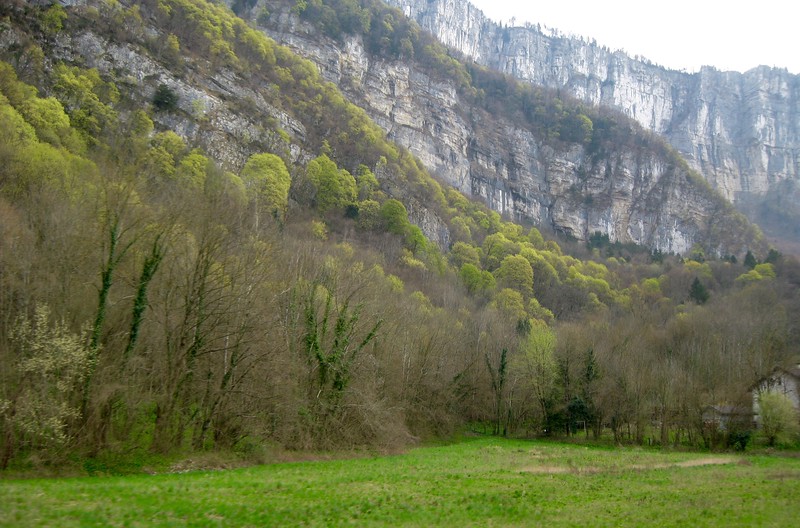 Springtime has hit this valley already

Have I mentioned how much I hate toll booths?

Finally, after ten hours of riding (including breaks, fuel stops and lunch), we arrived at our first night’s destination: Nîmes. I chose this town primarily for the location: getting us far enough from Basel so that we could enjoy the next few days sightseeing. However, when I looked more into what the town had to offer, I was pleasantly surprised to find that it was full of ancient history. Really ancient history that included quite a few things that Romans made. The Arena of Nîmes, built around AD 70, is the center point of the town. But more than that, there are also gardens, temples and churches to explore.

Our hotel, Hotel des Tuileries, was centrally located and easy to find. The owners, a nice British couple, were very pleasant and helpful, including offering us space to our park our motorcycles in their garage. Our rooms were small and comfortable, but they showed their age. The toilet rocked precariously when I sat down, and the tub was about just the right size for a child. But the bed was comfortable, the water was hot and we had a place for our stuff. Since we got into town later than I had hoped it was already dark by the time we parked the bikes and changed out of our gear. Oh well; this just meant that we’d enjoy the sights as lit by the city lights.

A full moon, visible through one of the arches

We circumnavigated the arena and then struck off through some of the many side streets of Nîmes, enjoying the bustling night scene. We came across another temple, the Maison Carrée. The Maison Carrée isn’t quite as old as the arena, but the details and architecture are amazing.

We found Les Alizes, based on the recommendation from our hotel’s hostess, and took a seat inside. Fortunately for Matt and I, Dan has a rudimentary grasp of French and was able to help us order our meals. The food was great and we enjoyed watching the steady stream of revelers passing by the big windows.

It had been a good but long day and we eventually wandered back to our rooms to prepare for the next day’s adventure!