Friday morning dawned bright and clear. We decided to get an early start on the road so that we could enjoy a leisurely romp through whatever roads we could find. But first we wanted to see a little bit more of Nîmes. 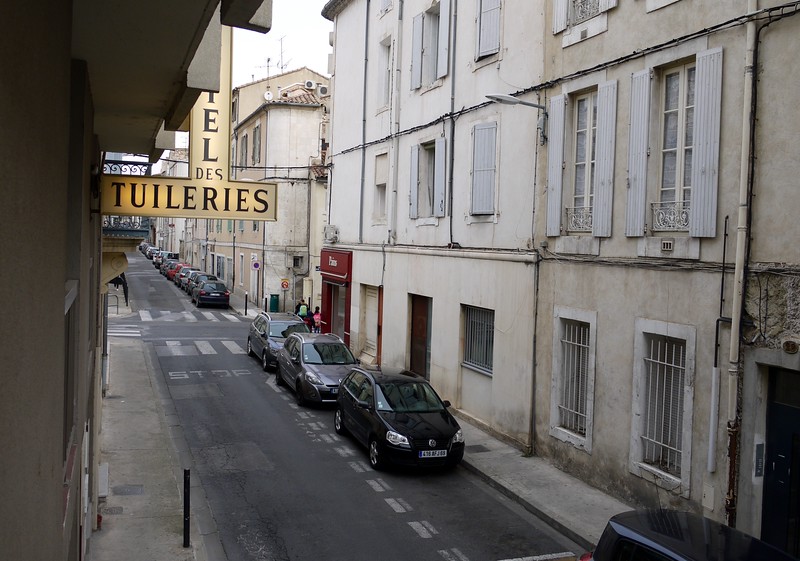 View from our hotel room the next morning

I had my “list of suggestions” handy and on it for Nîmes were temples, gardens and the arena. Ok, we did one of those, but there were more temples to see, as well as the garden. We checked out of the hotel, packed up our bikes and I programmed the GPS for the Jardin de la Fontaine, a garden on the other side of the city center. Unfortunately, I didn’t have an actual address, so it was a bit of a hunt for the actual garden gates. But I found it and we parked the bikes so we could explore in the morning sunshine.

Plenty of road construction in Nîmes 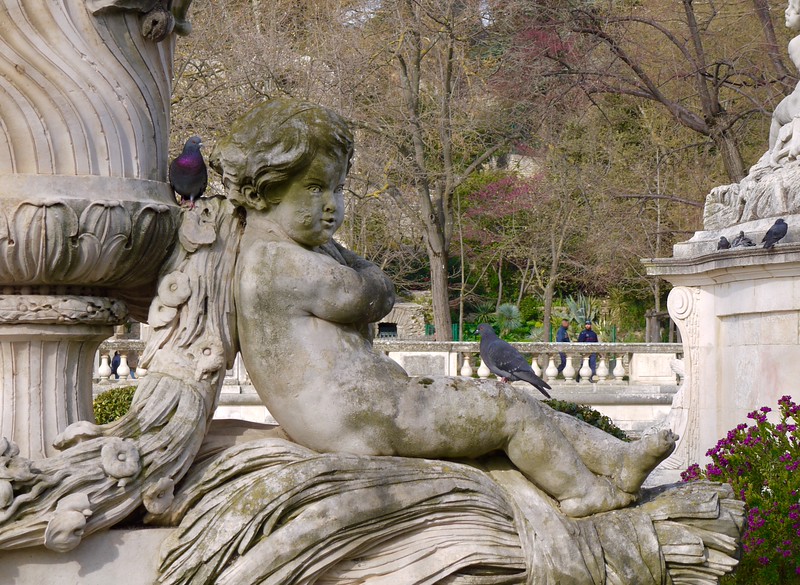 The spring that the supplied the Gauls, and later the Romans

Along one side of the park is another Roman structure, the Temple of Diana. Full access was granted to this thousand-year old structure, although a sign did request that people not climb on it.

We looked around a little bit more but with full gear and a day ahead of us, it was time to get back on the bikes. Someone had told me about a quiet little beach on the Mediterranean and I thought it would be a great place to stop for lunch. We hopped on the motorway, as the secondary roads would have more than doubled our time and quite honestly, the thought of the stop-and-go riding through so many little towns alongs the coast didn’t sound appealing to me. It was windy again…

At one of the toll booths, while I waited for the others to come through, I saw a van with a trailer full of adventure bikes. What’s this? It turns out it is an Edelweiss Tour on their way to Málaga, Spain. I know this because I also saw this van at a gas stop later and I asked the driver about his destination. 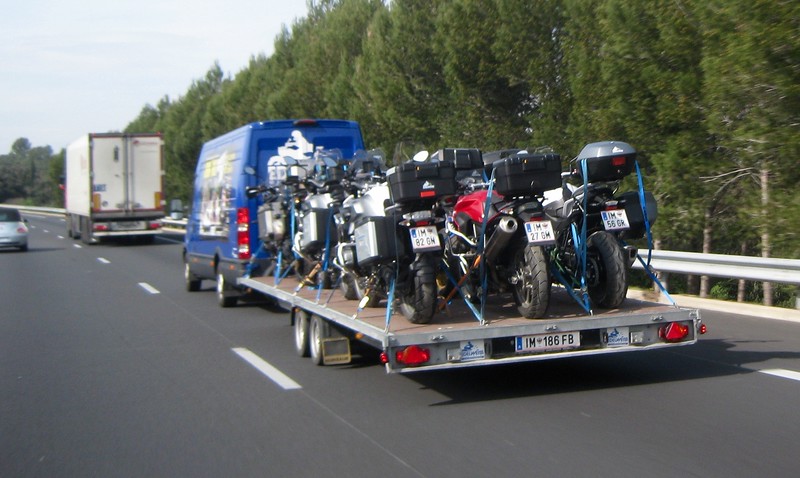 Traffic was thick but generally moved well. The wind noise made it a little difficult to use the communicators, but they worked well enough. A couple of police motorcyclists made their way passed us and naturally I took a photo. He immediately raised his hand, but it was unclear if it was a “don’t do that” or “hi there!” motion. Eh, at least he didn’t pull me over.

Finally it was time to get off the motorway! It was just a couple more kilometers until we reached our destination: La Franqui. The clouds were heavy and the winds strong as we coasted down the quiet town streets. This was obviously a seasonal resort town, and the season hadn’t quite begun. Fortunately for us, at least one restaurant was open (the only open one we saw!) and we had a fantastic meal next to a nice heater. Yes, the summer season wasn’t nearly here and the temperatures reflected just that. 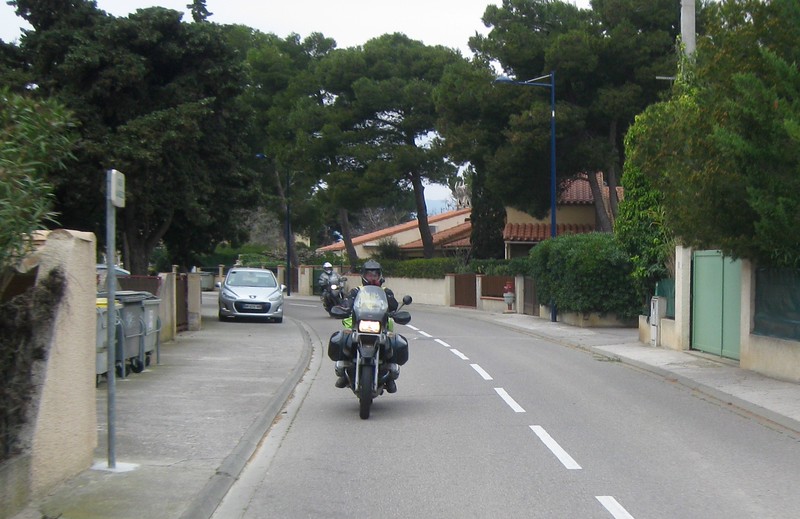 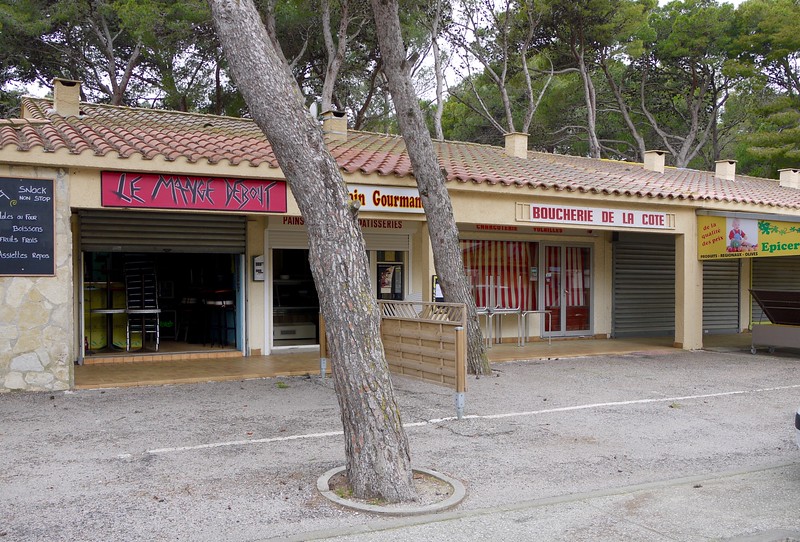 Getting ready for the season

Matt wanted to see the Mediterranean and I can’t say that I blame him. Unfortunately, as we sat inside eating it began to rain. It was a light rain, but rain nonetheless. It almost stopped by the time we were done so we decided to at least ride down to the beach and see what was there. I previously had great thoughts of sitting on the beach and resting my eyes while listing to the waves lap at the shore. Nope, not today. It was windy, which is obviously a constant thing based on the windsurfing businesses we saw, and the cold and damp air made me glad for my motorcycle gear. Others, however, were enjoying the day:

It was time to go. I had a hotel reserved inland and I was hoping that the wind would die down and maybe – just maybe – the clouds would blow away with the wind. We rode back through La Franqui and crossed over the motorway. Ha! No more of you for the next couple of days!

The vegetation had changed since we reached Nîmes. It was much more Mediterranean-feeling (no big surprise there) and now it changed again. After we left the motorway behind the road began to rise into the mountains. We were in the foothills of the Pyrenees, a band of mountains that mark the border between France and Spain. 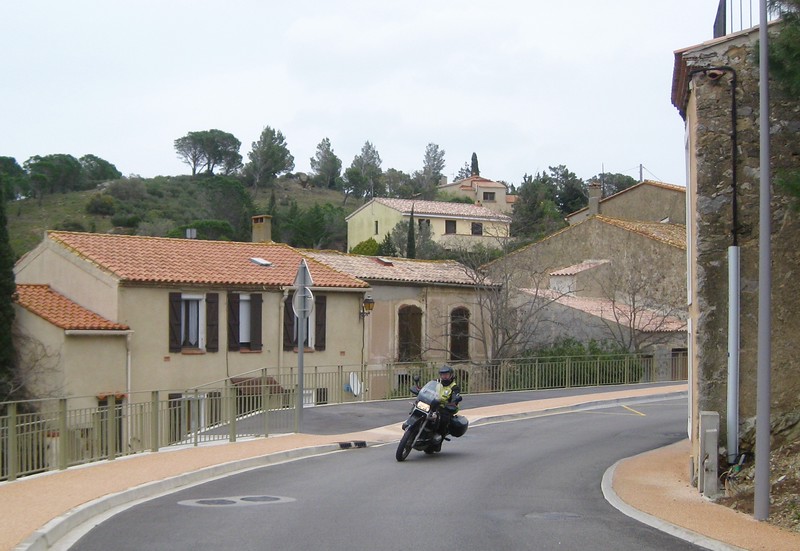 We haven’t left the Mediterranean too far behind yet 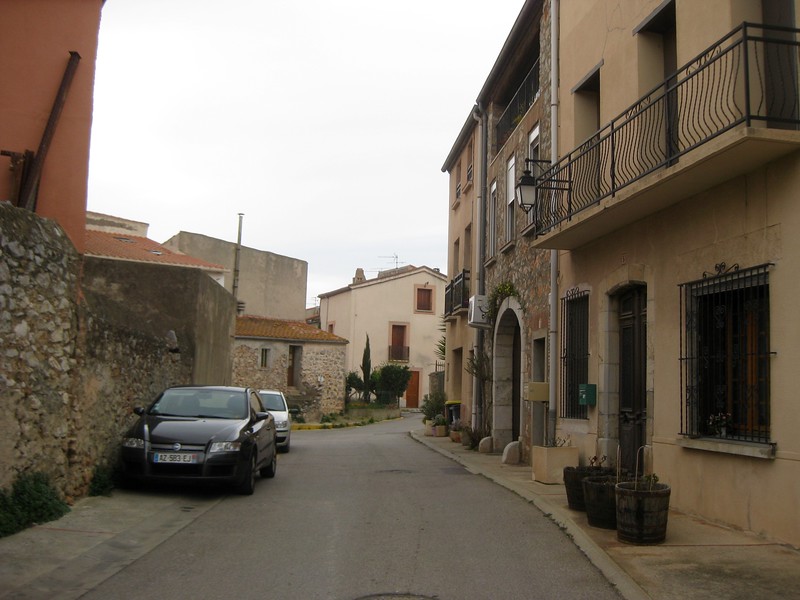 We had entered Wine Country. The villages we saw catered to the growing, production and marketing of wine. It was relaxing to ride through the vineyards and villages, especially as the road was in excellent condition. And not just the surface, but the engineering that went into the corners and the cambers was spot on. I could easily ride this all day. 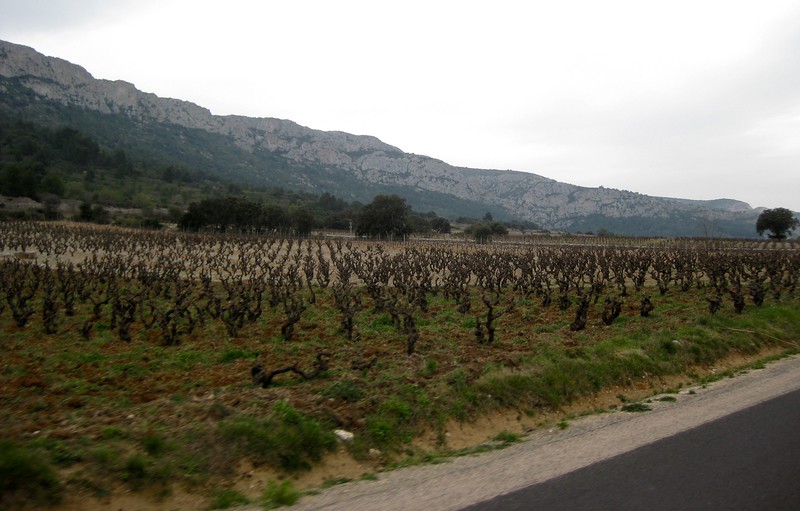 We reached the town of Maury. On my list of fun things to do was to visit a castle. The problem was, I wasn’t sure where the castle was. I could see something up there on the hill, but the name on the signs we passed didn’t match up (I was actually looking for Chateau-Peyrepertuse, but I only saw signs for Château de Queribus). I voiced my concern and they voiced their desire to visit whatever it was up on that hill. That took care of that and off we went in search of Château de Queribus.

Looking back down the road to the Chateau

At the parking lot at the top of the mountain we parked our bikes and the guys immediately started for the trail to the top. I wasn’t happy about this, as I wasn’t keen on hiking up in my gear. In fact, I was prepared to wait for them by the bikes, but I realized that I’d regret not making the trip, so off we all went together. 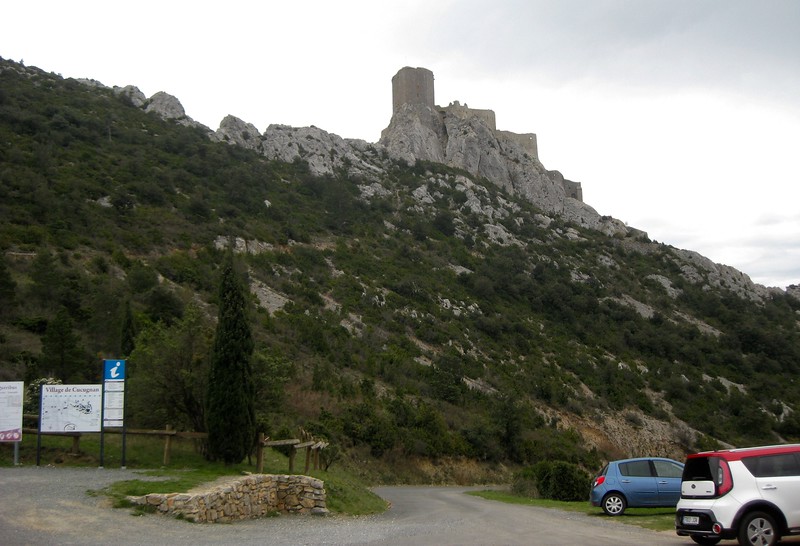 (Diagonal) Trail to the top

It wasn’t as bad as I expected and it was a quick jaunt to the top. The winds were extreme and the view expansive. Built on the highest mountain in the area, I could see a great distance in every direction. Unfortunately the skies were not clear enough for a good view of the snow covered peaks to the south, but I could imagine the views on a blue sky day.

Mountains barely visible in the south 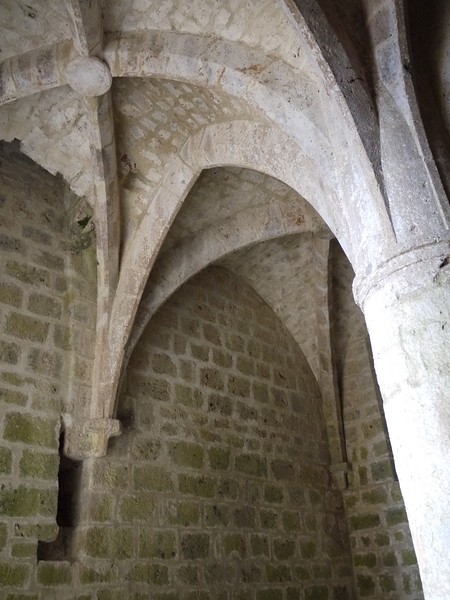 The day was waning. It was time to retreat down the mountain and get to our hotel. The ride was a pleasant one and we made quick work of the fast roads – until we reached the area near Vinca, France. From here, the road changed drastically and our progress reduced considerably. 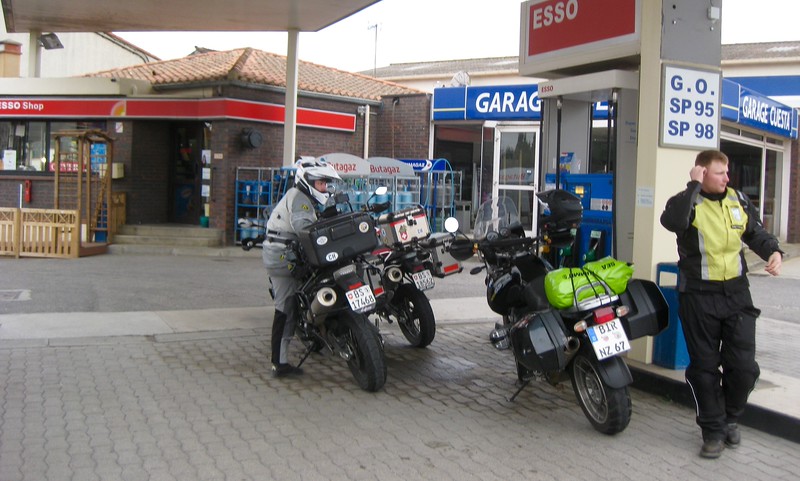 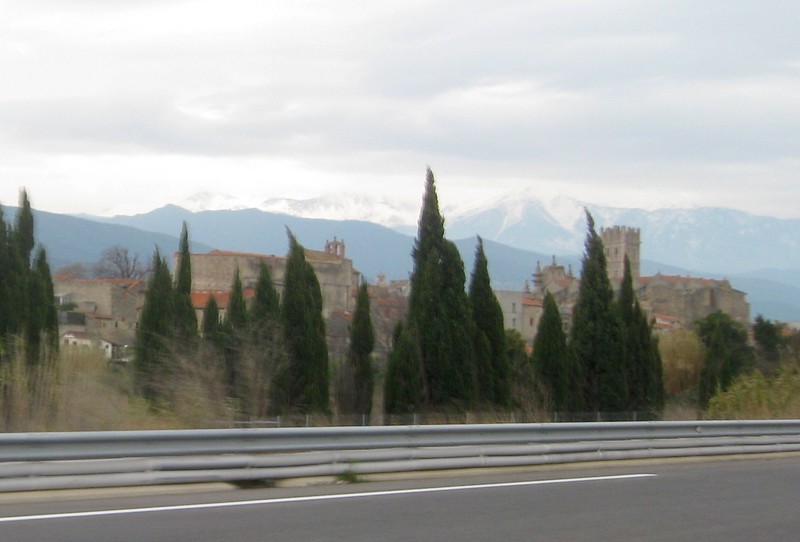 We were entering a steep, mountainous area and the road was narrow and twisting – and full of traffic. But the views outweighed any inconvenience that the cars brought on. Hillside villages and trestles lined the roadway, and in between those were steep, tree-covered mountains. 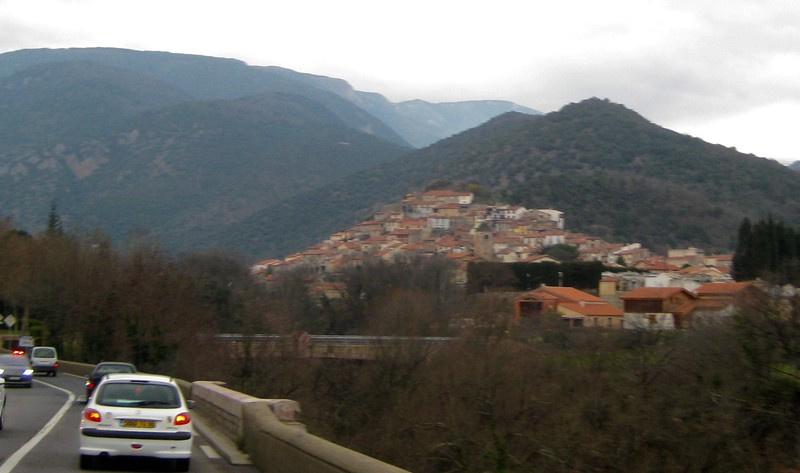 The drivers were getting crazy. So many people trying to make insane passes and shoving themselves in front of other cars. We did our best to stay out of the way, but too many times the cars expected us to pass on corners that were inappropriate and then they drove slowly when it was impossible to pass. It was with relief when we reached a point where the traffic thinned and it was just us.

We found the hotel but only through the wonders of technology. I had an address in the town of Font-Romeu but the street would not show up on my GPS. So while I was still enjoying the comfort of my couch I did a Google map search, which at least showed the road. I used Street View to look at the corner, found a building and moved the camera around until I could see an house number. I then put this address into my GPS, knowing that when I got there in person I could look for the hotel signs I saw on Street View. Hooray for the digital age!

We parked the bikes and took in the view: it was almost sunset but there was enough light to give us a sense of where we were. In the distance were the peaks of the Pyrenees and in the foreground was the Odeillo Solar Furnace. This was another item on my list but I admit that I had no idea it would be in our front yard!

We opted not to eat at the hotel and instead made our way into the town of Font-Romeu. This was not as easy as it looked on Google (I guess technology still has some work to do). We ended up getting on the bikes, as Font-Romeu is basically one massive hill town, and the town was far above us. We parked the bikes in a little grassy area and went off to find dinner. Pizzas for everyone! By the time we were served, ate our pizzas and paid our bill, it was very late indeed. We walked back to the bikes to go home when Dan called out “Colleen, your bike fell over”. It turned out that the soft grass wasn’t enough to support my beastly BMW and it had tottered over. There was no damage done and unfortunately, it was the first time in days that I didn’t have a camera with me. Looks like I’ll have to wait a while longer to get a shot of the amusing stickers I put on the bottom of my panniers.