Breakfast was hours ago and with an upcoming tour of the underground, we thought it best to grab a little something for lunch. We went back to the recommended pizza joint (Gino e Toto Sorbillo, for those who want to know) but again, the line was stretched beyond our limits. We agreed to come back after the tour, so would just get a small snack for now. Just down the street was a restaurant with a window vending food to passers by. We each chose a deep fried ball of potato and cheese- It was delicious and just what we needed to keep us going.

Napoli Sotterranea was nearby and came highly recommended. We actually tried to do the tour the night before, but we went to the wrong address (which was also a cavern tour group) and had missed the last tour of the evening. Only later did we find the “real” one, but by then we were again too late for the last tour.

It was a bit of chaos when we got there, as an Italian language tour group was lining up and the woman in charge kept calling out instructions and moving around. I merely wanted to buy a ticket for a later (English language) tour, but instead she instructed me to wait off to the side until this group was gone. After ten minutes, we learned that they were gathering up people for an English language tour and we were now part of that group.

About two dozen of us clustered around a young guide and he led us down stone stairs. Down, down, down we went, until we were now well below the church that marked the entrance to the tour. Here we were given a short history lesson of the caverns and their uses throughout the years. I took photos, but of course in the low light, they came out grainy and dark. Please use your imagination while looking at the following pictures!

Originally excavated to provide building material for the city above, the caverns were eventually reconfigured to cache water for use by the people above. The houses and wells on the surface would have long ropes with clay amphora to pull up the water.

Looking up at one of the well holes

In the 19th century the caverns were no longer used as a water source. Cholera had swept the city and the water was drained. The resourceful residents used the large space for their debris – meters upon meters of refuse was tossed into the open wells. During WW II, residents took shelter in the caverns and those wells were sealed up to keep bombs from tumbling down into the depths. It was too laborious to remove all of the debris that had been dumped, so instead it was compacted and paved over. Therefore, the apparent depth of the caverns was greatly reduced in what we could see now.

The red line is the old water line

One bomb that fell through an open well, suspended in time

A recreation of ancient tufa excavation 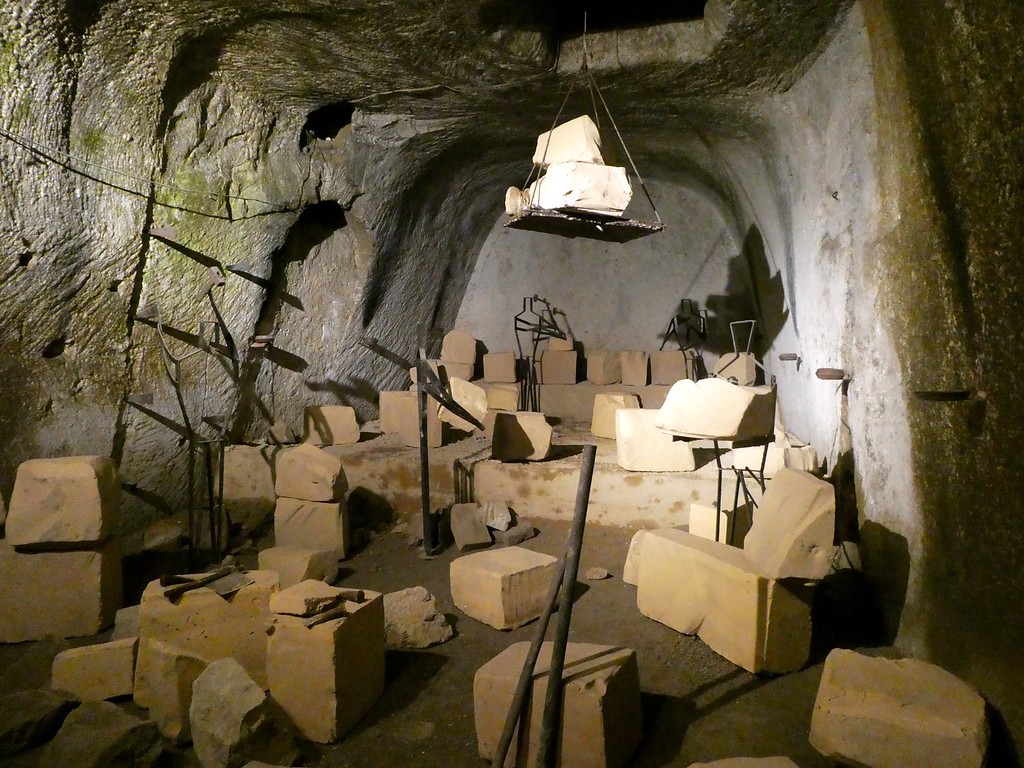 Back when the aqueduct was viable, it needed to be maintained. Shafts were cut into the tufa with notches for steps. Tiny hand holds had been carved into the walls to allow for the worker to traverse the dark walls.

Going further in the cavern

At one point, we were invited to explore the really narrow slits that used to channel the water from cavern to cavern. We were warned that it would be really dark, and really narrow. Those with problems with small spaces were invited to stay behind and wait. Those who were ready for an adventure were given a candle. 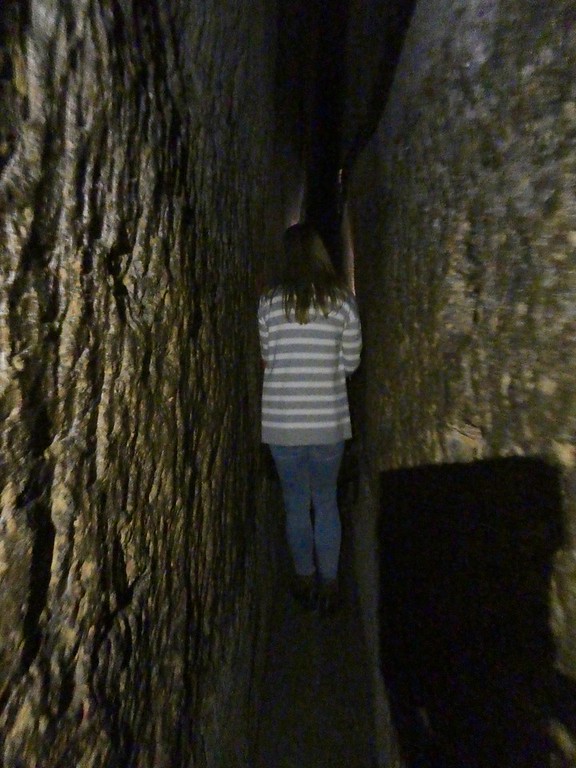 The channels eventually opened onto beautiful cisterns. The addition of modern lighting helped me to appreciate this, as I am sure that the candles of 200 years ago would not have been as illuminating

The caverns were used during WW II as air raid bunkers, and there were still traces of the time that the families spent hiding down below. Beds, chairs, a sewing machine, and children’s toys had been pushed to one side, long forgotten after the ravages of war. People stayed here not only during the bombings themselves, but often when families found their homes bombed out, they returned to make the shelters their new temporary homes. I didn’t take any photos, but here’s one I stole from Shutterstock. Shhhhh!

We climbed up the stairs and went out to the street. Our guide had something else up his sleeve: an ancient Greek-Roman theatre. The site had been buried for so many generations, each one adding another layer to the pile, that it was not obvious what was underneath the streets. The entrance to the forum today was through the nondescript door of someone’s home. Of course, the homeowner had recently sold it to the tour company so we had no problems getting in. 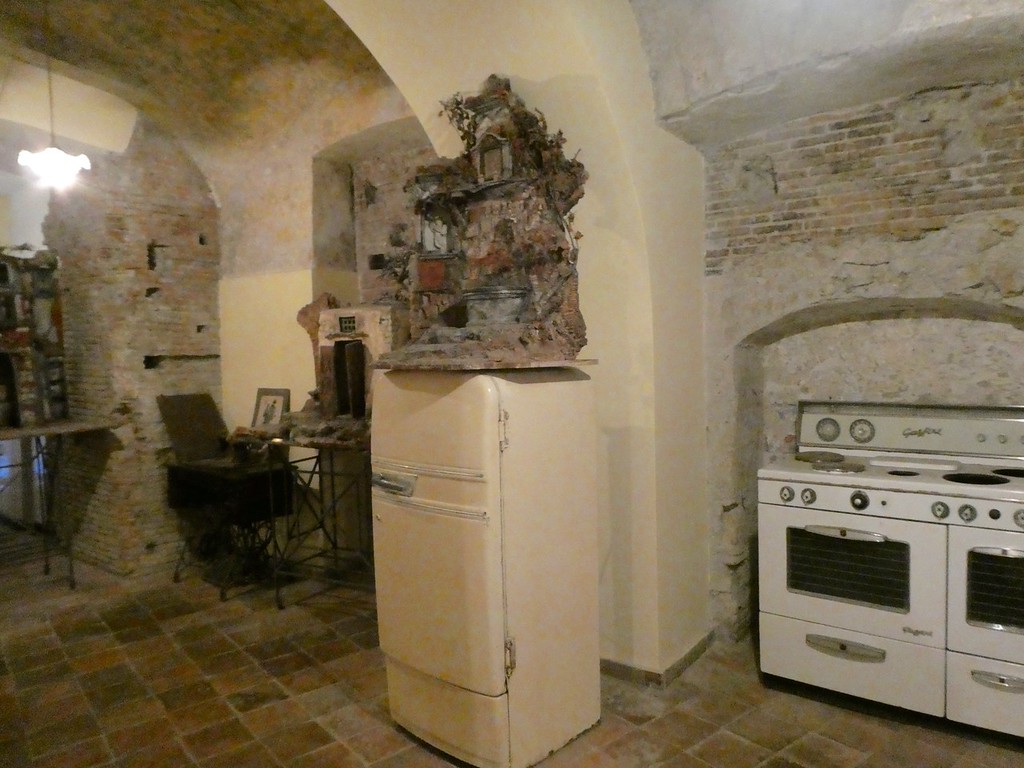 The door downstairs was under a roll-away bed

The floor of someone’s kitchen above 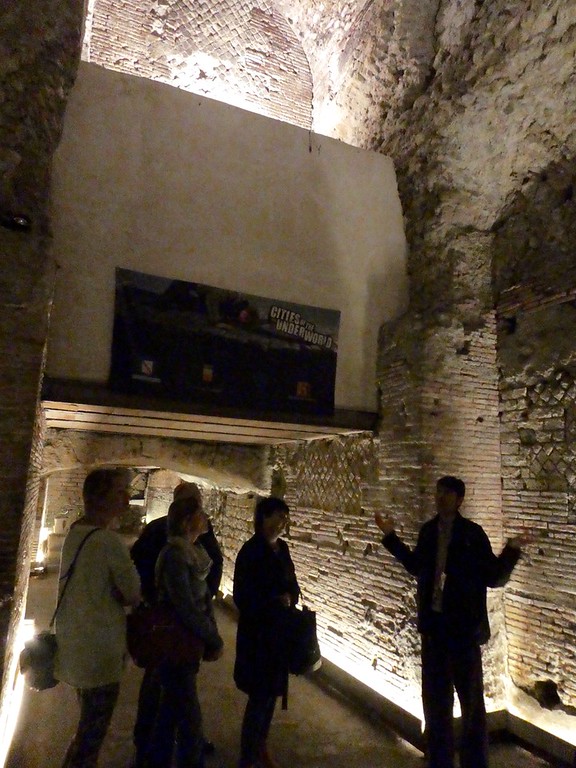 Exiting out the back, with someone’s home next door

The tour ended in a room full of intricately detailed dioramas. I had seen stores that sold these during our walks, and had heard of Via San Gregorio Armeno, a street famous for the shops the built and sold the scenes, as well as individual pieces and characters. It was incredible, the detail that went into the construction of not just the figurines and props, but the settings themselves. 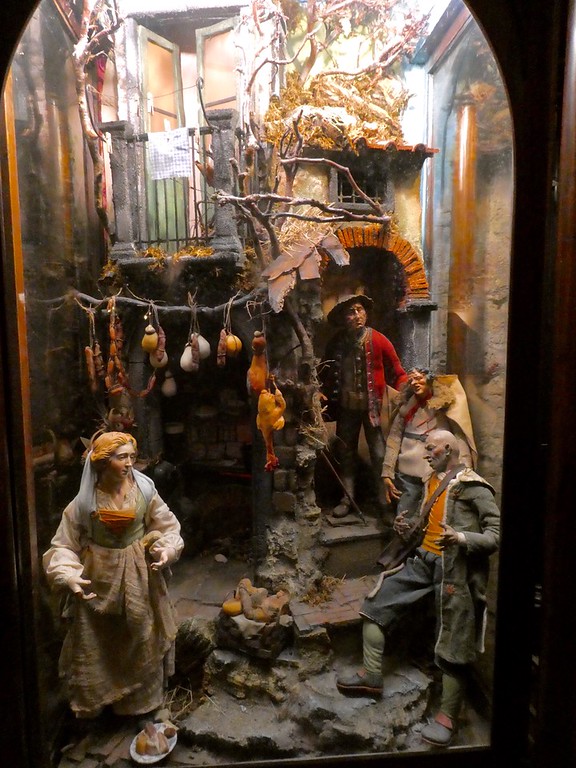 The tour was over and we had no further plans. We were in a quiet (!) back street and it was mid-afternoon. We walked around some more, knowing that this was our last chance to explore the city, as we were flying home in the morning. And we still needed to plan something for dinner. 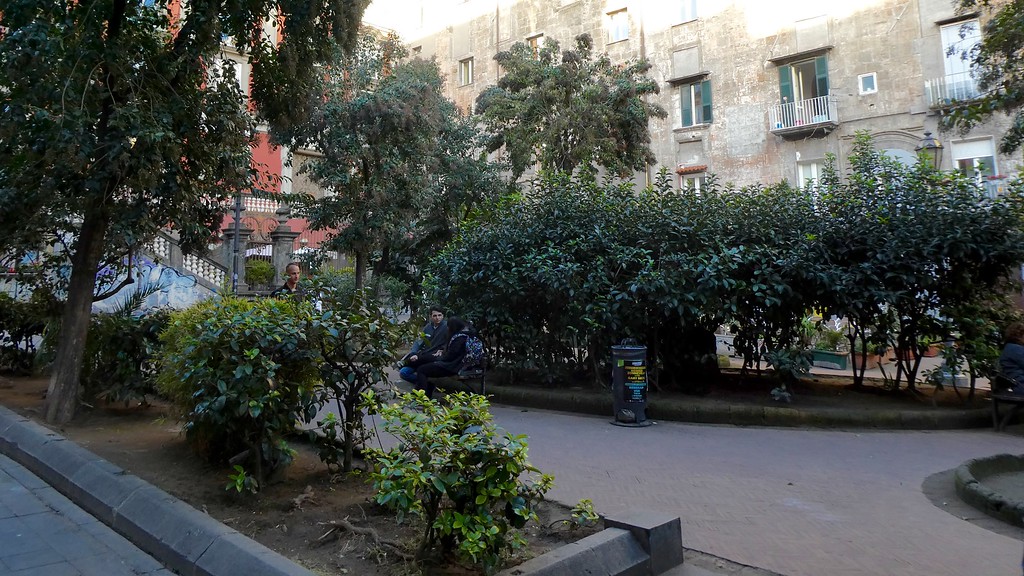 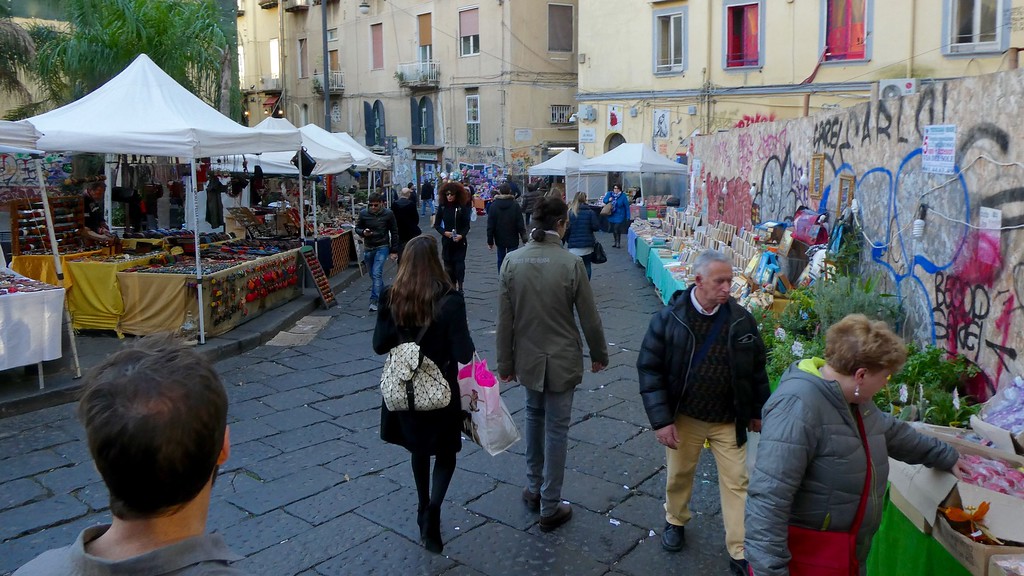 Graffiti as far as the eye could see 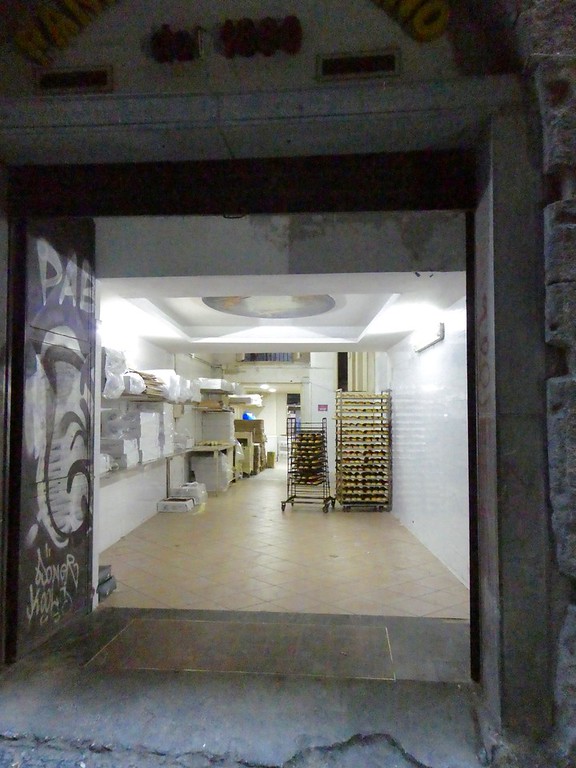 We were heading back to our hotel room, ready to recharge before going back out for dinner. Gino’s was not yet open, so we knew that we’d have to dine somewhere else. As we neared the hotel we passed a nice looking place down the street. Salumeria Upnea looked nice, had a good menu and was close. We waited until they opened and were – suprise! – the first ones to be seated. It was a cute restaurant, with interesting decorations and good staff. The food we chose was delicious and filling, and seemed unique to the region. And it wasn’t pizza!

Still a lot of people in the streets 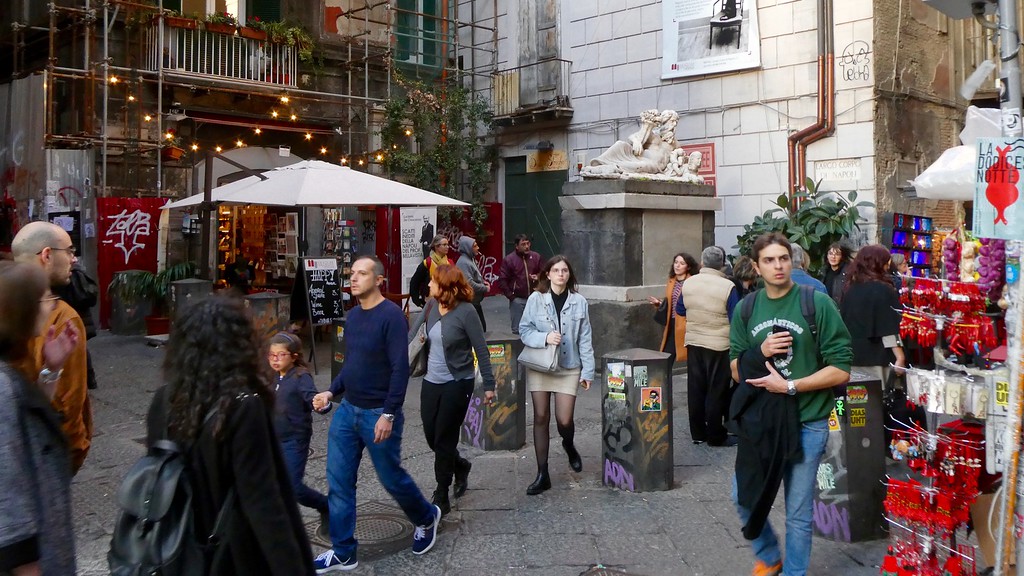 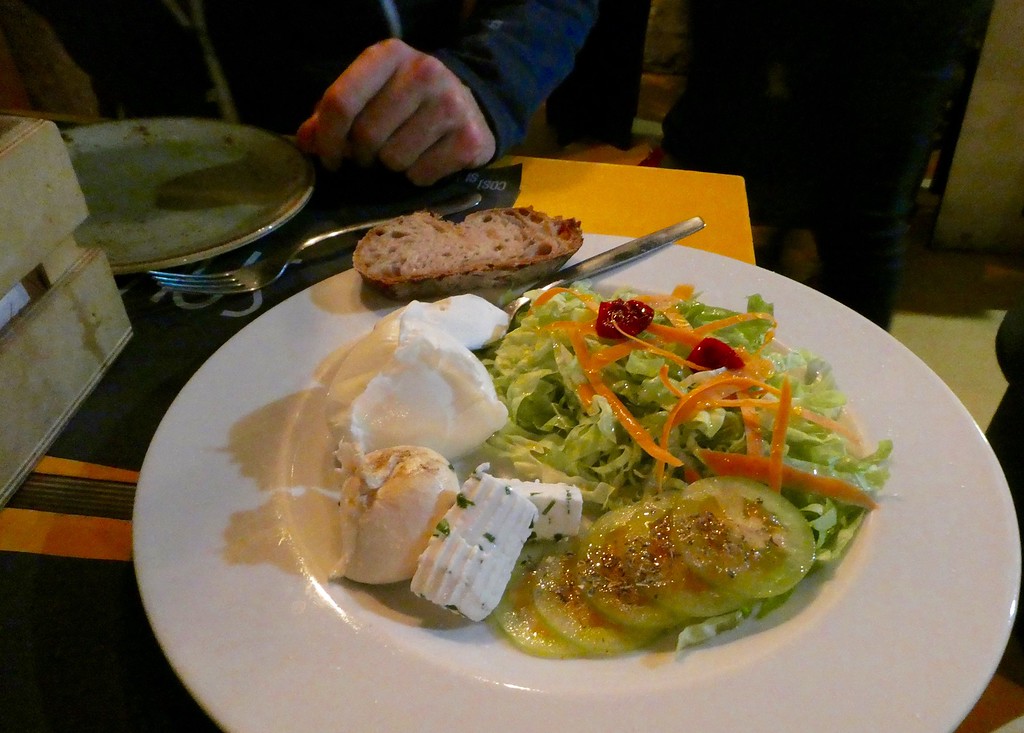 After dinner we wandered some more, this time further along the waterfront to a more modern, commercial area. It turned out we were near here yesterday, but we had arrived from a different direction. The streets were decorated for the upcoming Christmas holidays and many people were out to enjoy the evening. 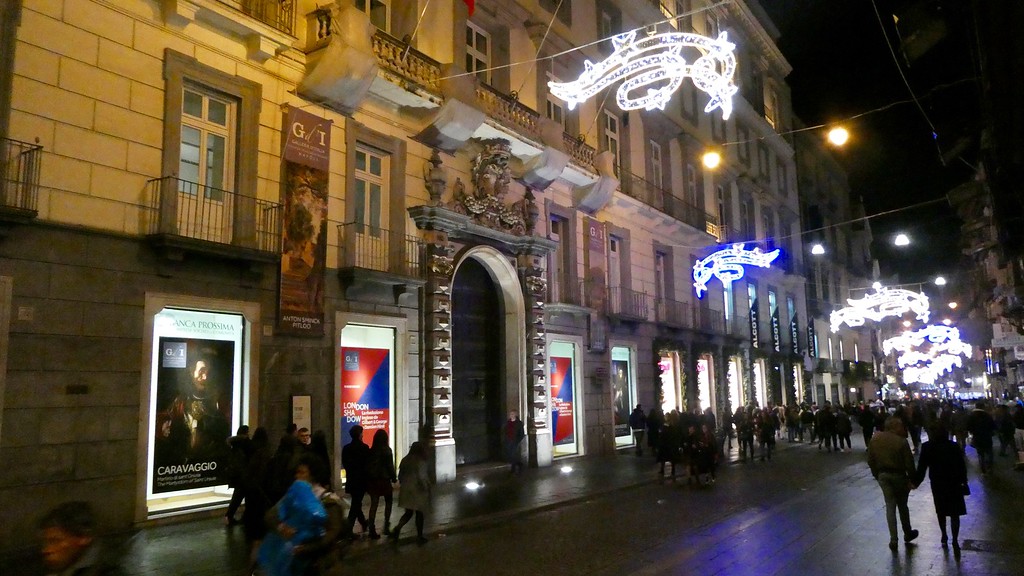 Inside Galleria Umberto I 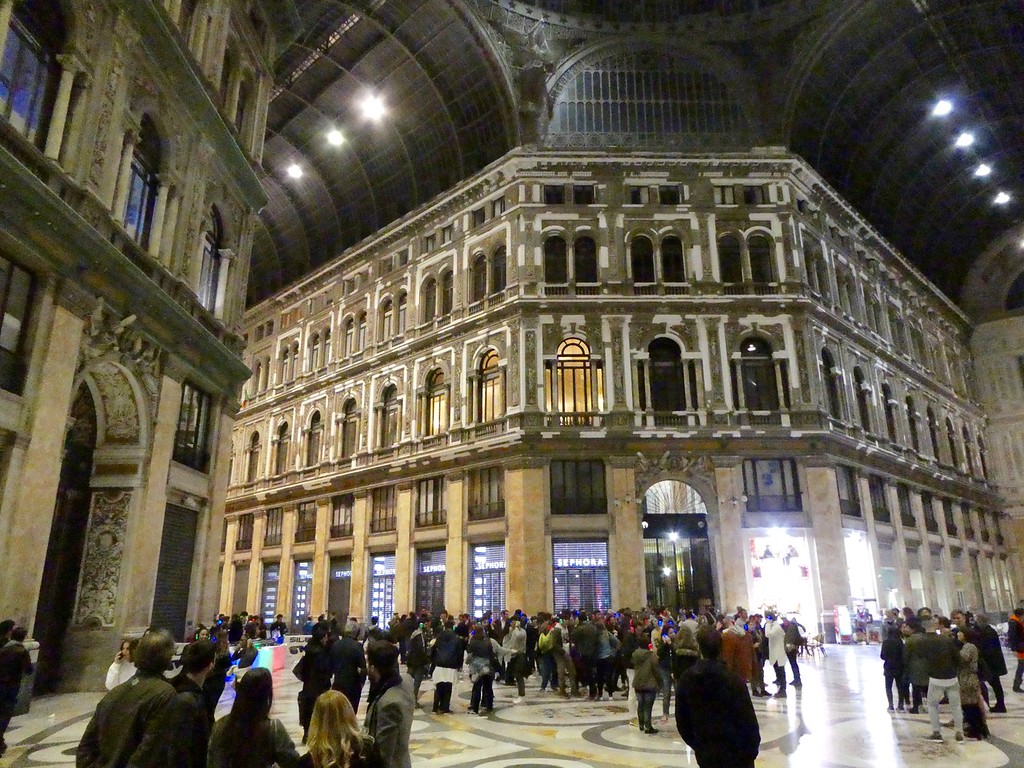 Mosaic on the floor of the Galleria 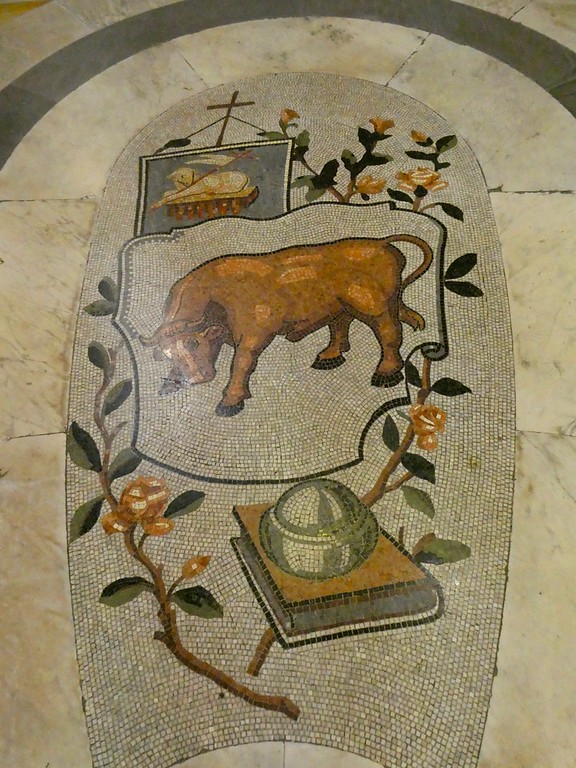 We returned to our room where we were once again greeted by the noisy fan, the revellers walking the streets and – much to my surprise – a band performing in the piazza on the corner. I made use of my noise-cancelling earbuds, read my book and eventually drifted off to sleep.

In the morning we decided to simplify our departure from Italy. Our prior encounter with Italian public transit had soured our trust in it. We asked the front desk to call us a taxi, while we waited inside the lobby. The taxis have a flat rate to the airport (19.50€), which seemed a bargain considering the ease, speed and surety that we’d be on time.

We were on time at the airport, our flight back was uneventful and our pet sitters were waiting for us when we got home. It had been a trip of extremes and it was good to be home.