It was time to leave Pompeii and go somewhere new: Napoli!

Waiting for the train at Pompeii

We didn’t have a schedule to keep. It was just a matter of packing up our stuff, heading to the train station, and catching the first available train to Napoli – and that’s what we did. Except that the first train to Napoli was late. A whooping 70 minutes late! We had actually planned to catch the 9:16 train, but the 8:16 train was so late that we were able to catch it – and we still had to wait 40 minutes for it. We weren’t in Switzerland any more.

We’re on a train!

Strange goings-on at the tracks 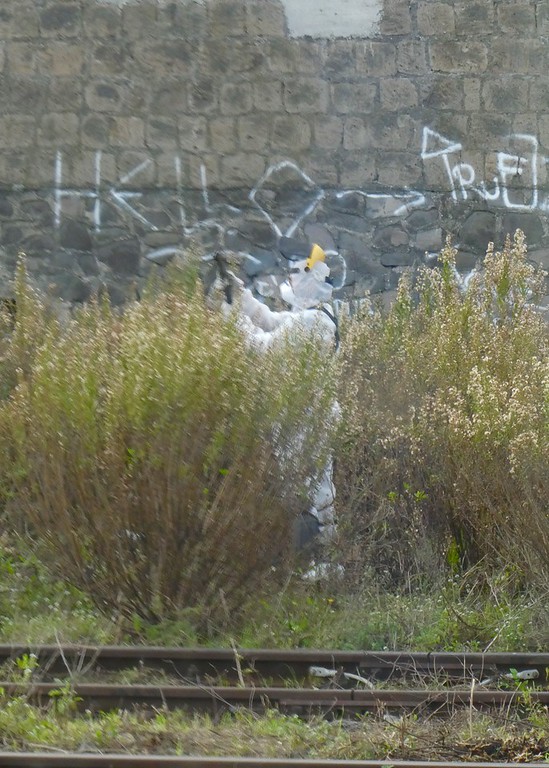 Abandoned (?) waterfront property, with the Sorrento coast in the background 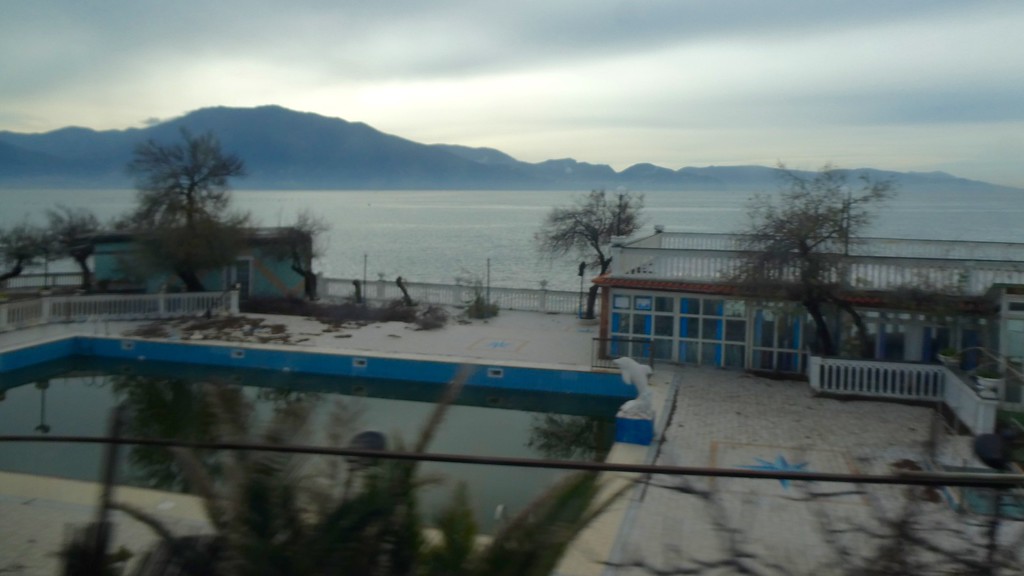 The ride to Napoli wasn’t as smooth as the ride from Napoli. While we had finally gotten on the train, we hadn’t gone more than one stop when it was announced that the train would not continue to Napoli. Everyone had to get off at the next station to continue the journey by bus. The train pulled in and we got off along with everyone else and wandered through the station to the street side.

There was no bus.

Eventually a bus did pull in, but instead of stopping to let everyone board, it continued passed us into the parking lot, where the driver got out and disappeared into a building. Hmmmmm. We waited a little longer. Most of the other passengers had wandered back into the station while we engaged in a conversation with a taxi driver. Out of curiosity, we asked him how much to get to Napoli. Sixty Euros! Yeah, that’s not going to happen. We went into the station as well and saw a train there – it was the train to Napoli! We ran over to it with less than a minute to spare. I have no idea how anything gets done when the transportation is so unreliable.

We made it to Napoli

Compared to the sleepy streets of Pompeii, Napoli (“Naples” in English) was a bustling, exciting place! We delved into the crowded and narrow streets, heading in the relative direction of our hotel. The plan was to drop off our bags and then explore the city. I had chosen a fairly central location, so that whatever we wanted to explore would not be too far. But first we had to get there.

The piazza near our hotel 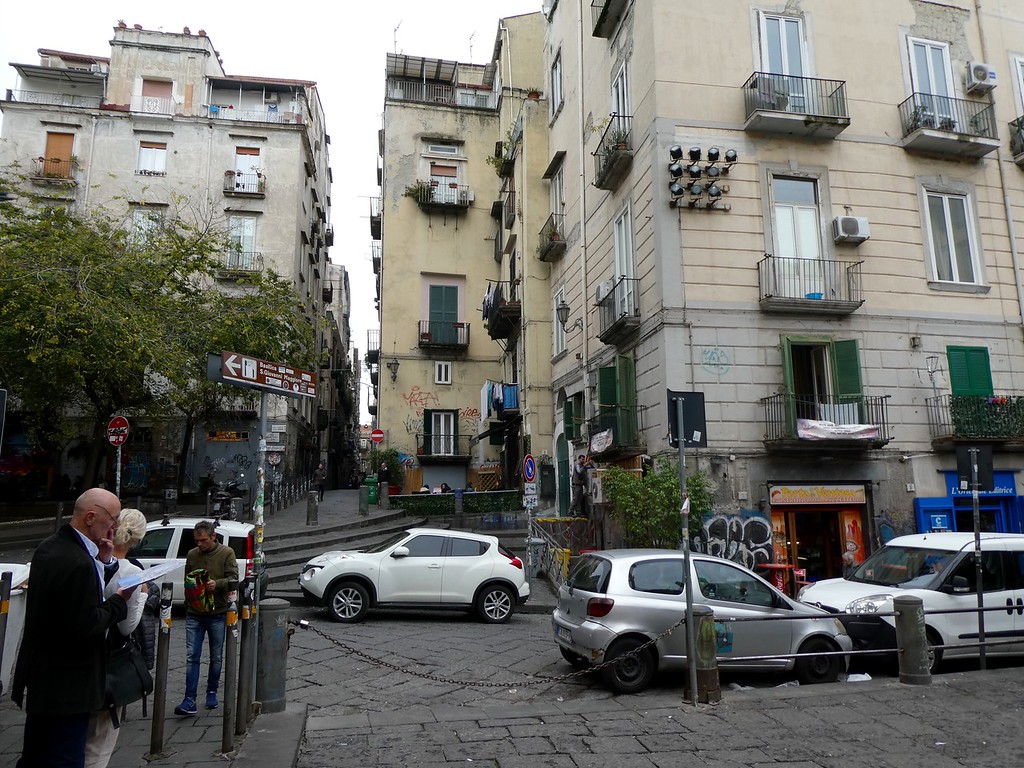 Our hotel (at the wooden doors)

After checking into our hotel (Decumani Hotel De Charme) and dropping off our bags, we went back out into the chaos that is Napoli.

One of many inner courtyards of a block of houses

We ended up on the path of least resistance: walking downhill to the waterfront. We didn’t really have much of a plan, other than a list of “interesting things to see” given to me by my Italian colleague. The Castel Nuovo was on that list, and now here we were!

The city was loud, dirty and chaotic – the complete opposite from Pompeii. It was fascinating to see how people lived and got around. Everything was covered in graffiti, litter piled in the gutters and building surfaces were covered in dirt and grime. At the same time, it felt “lived in” and the people that we saw looked happy. It was not a bad place to be. 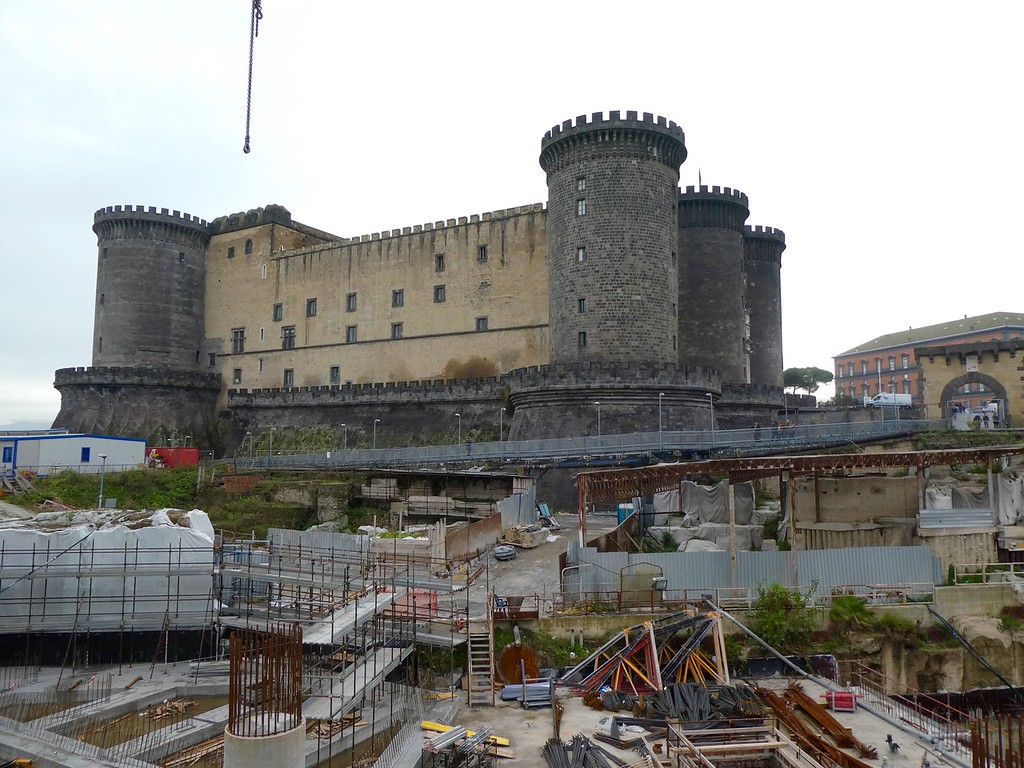 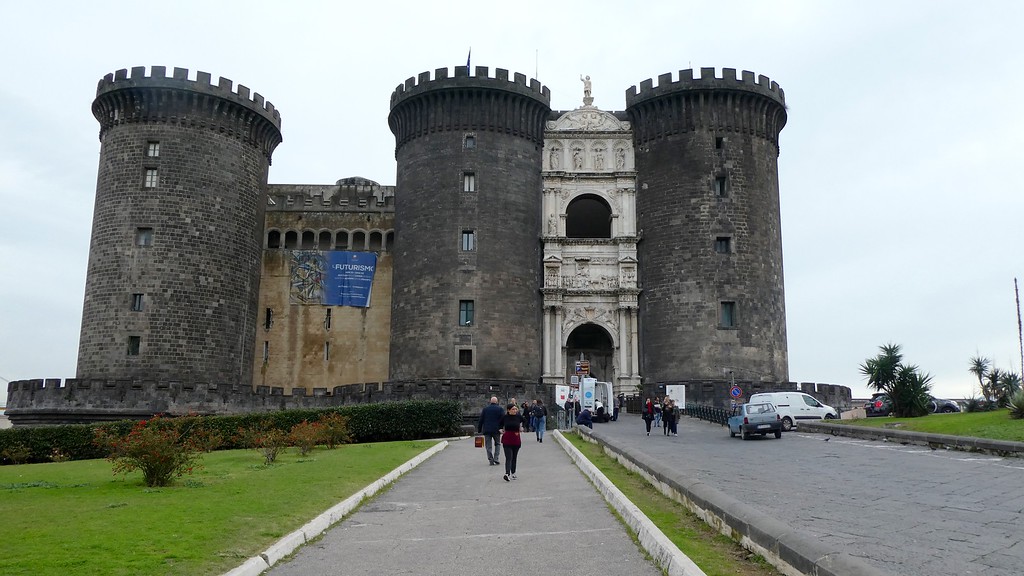 Plenty of construction in the area 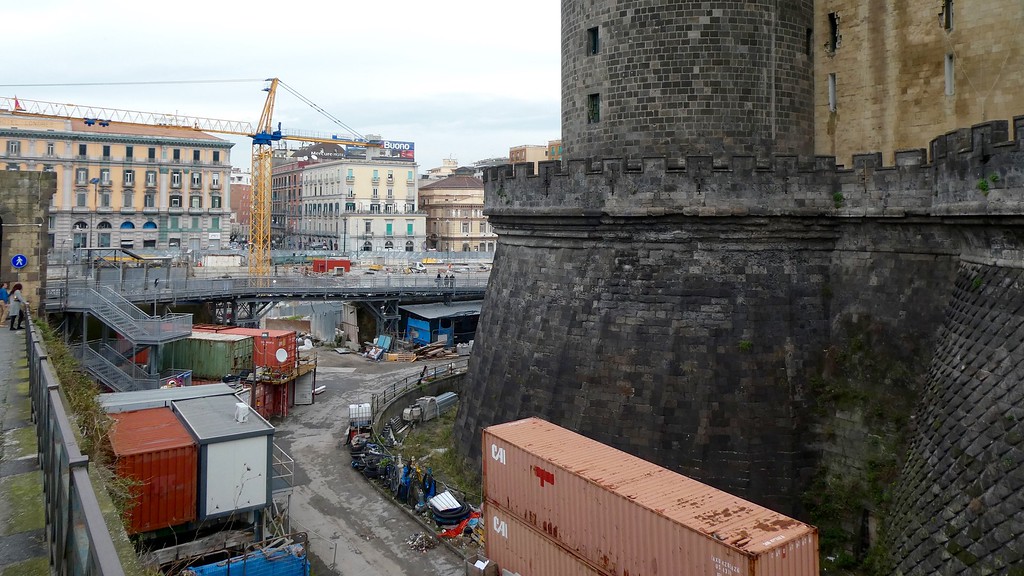 We walked around the exterior of the castle, but were not interested in going inside. I had seen my share of castles and I was more interested in seeing what the rest of the city had to offer. 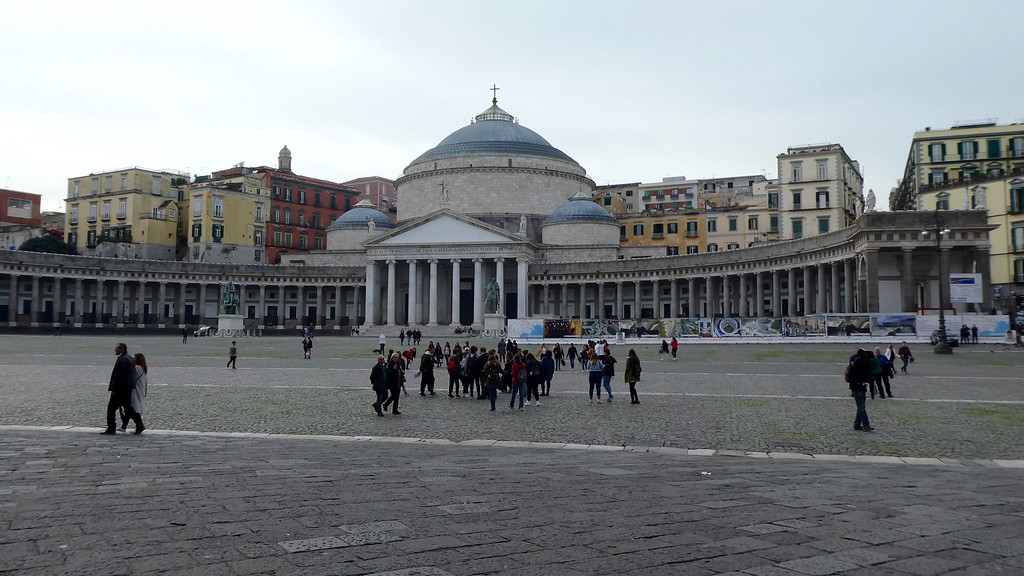 We continued our way along the waterfront, ending up at a marina. We were ready for some food by now and Dan’s phone suggested that we try a restaurant across from the Reale Yacht Club Canottieri Savoia. High on the recommendation list was Transatlantico Ristorante. Sounds good – let’s go!

Transatlantico Ristorante at the far end 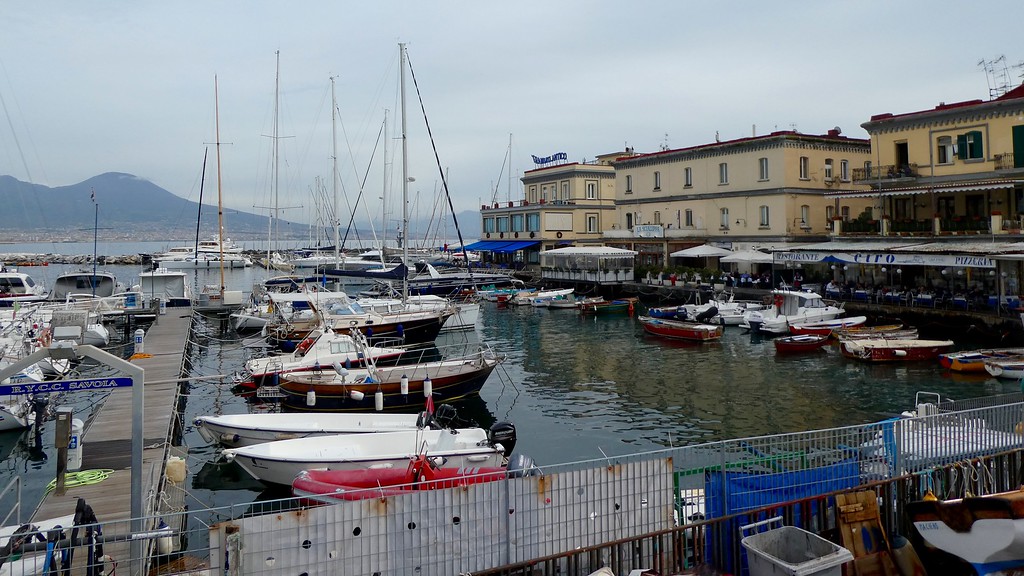 Mt Vesuvius in the background 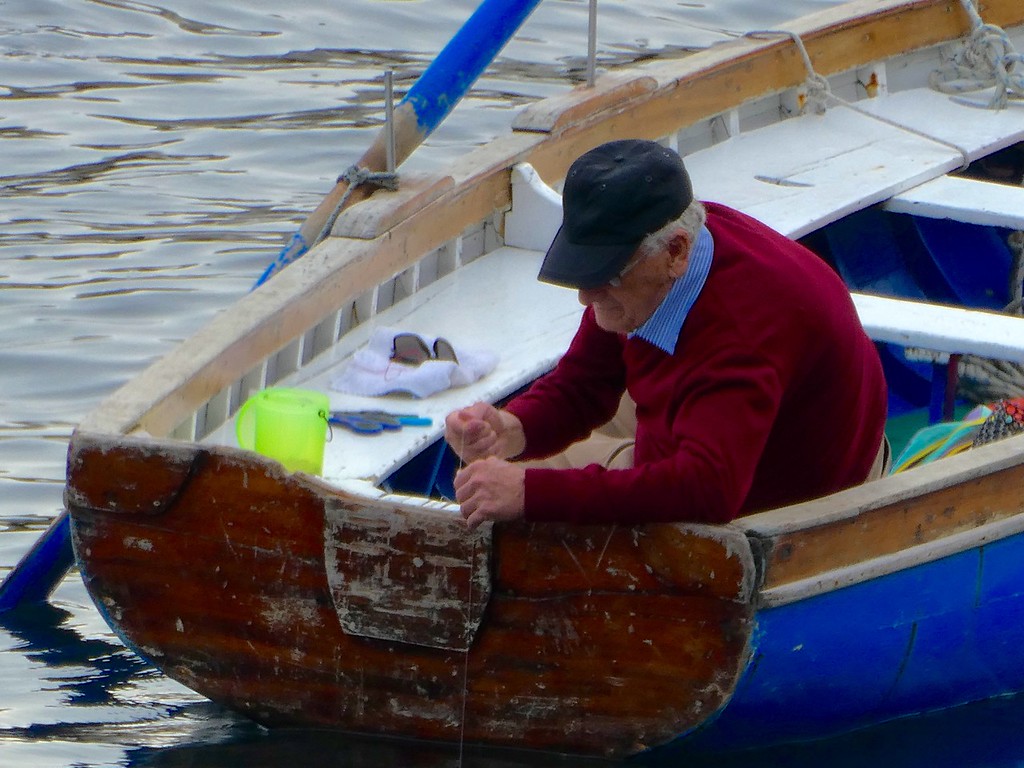 Castel dell’Ovo in the background 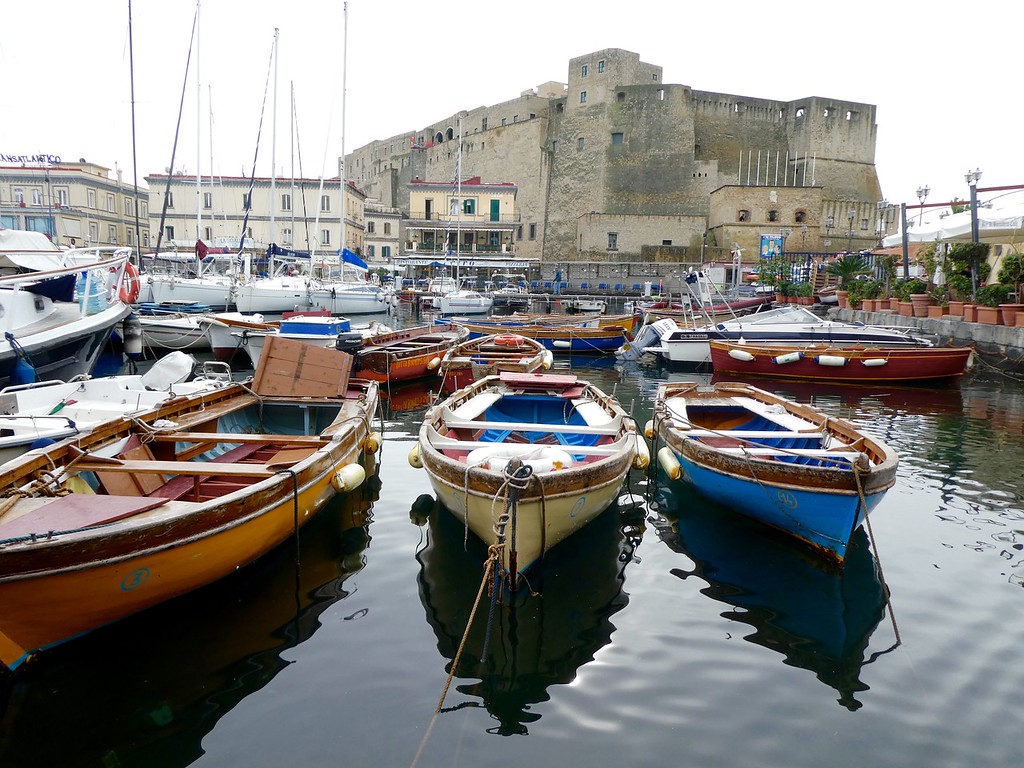 We were the first ones for today’s lunch service and we chose a table outside along the water. It was a beautiful day and having Mt Vesuvius and the Sorrento coast as the backdrop made it a perfect setting.

Lunch at the Transatlantico Restaurant

A table for two 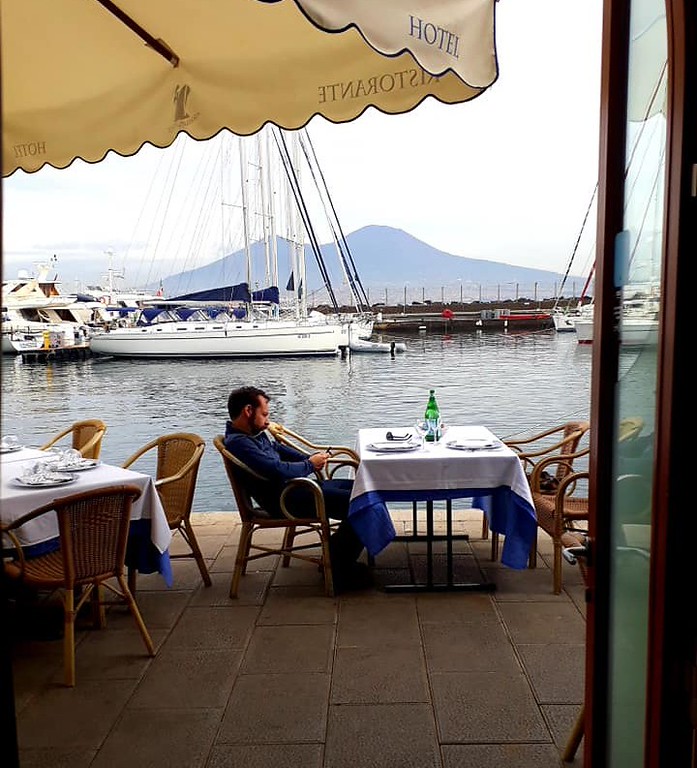 Lunch was good and relaxing. It was a quiet marina and we enjoyed watching a few fishing boats come and go while we sat there. Eventually we left and returned to the throngs of people in the city. Dan mentioned that there was a place with a really good espresso nearby, so we made it our next goal. We did a bit of backtracking, since it was on the Piazza del Plebiscito, and went inside a very beautiful shop.

I took photos while Dan ordered and waited…. 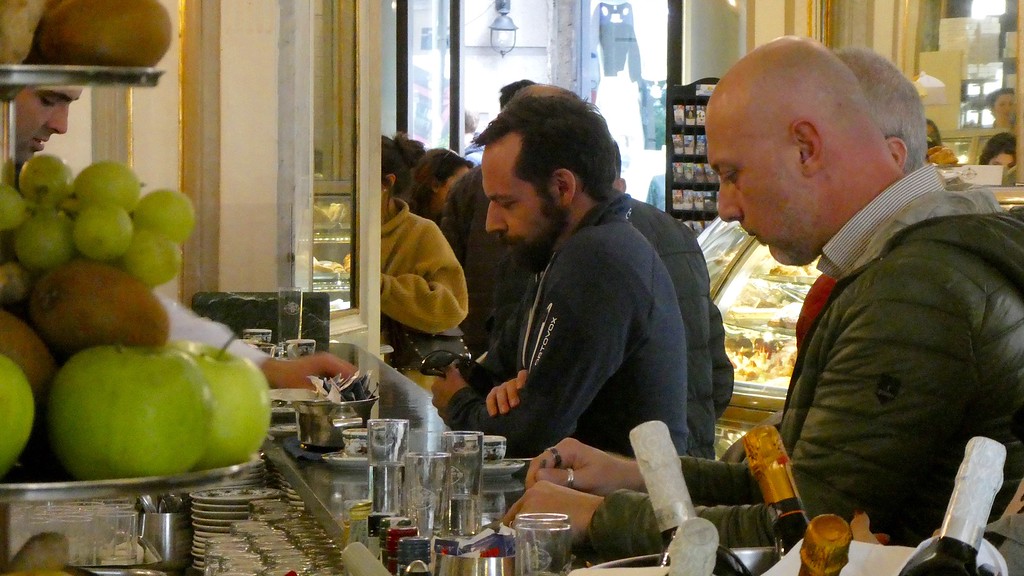 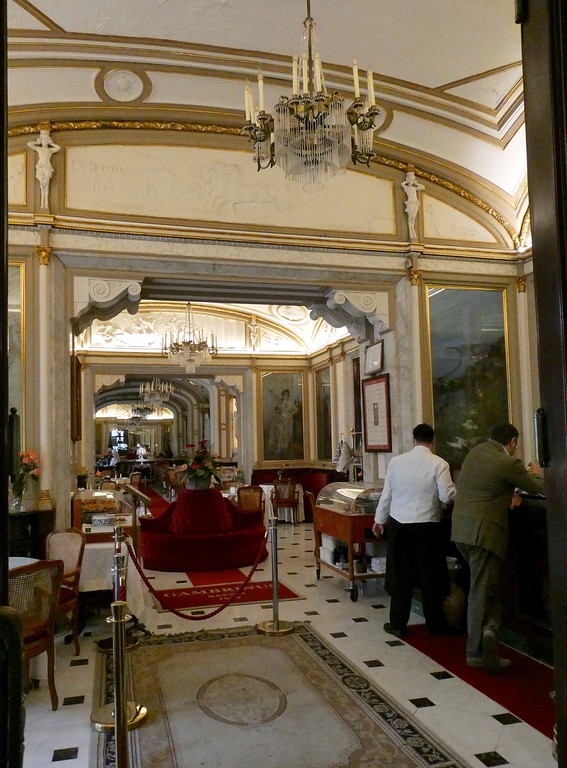 The espresso was deemed “good”, although Dan said that it was difficult to drink because the cup itself was too hot. Clearly, more research would be needed on this trip.

Back into the streets of Napoli 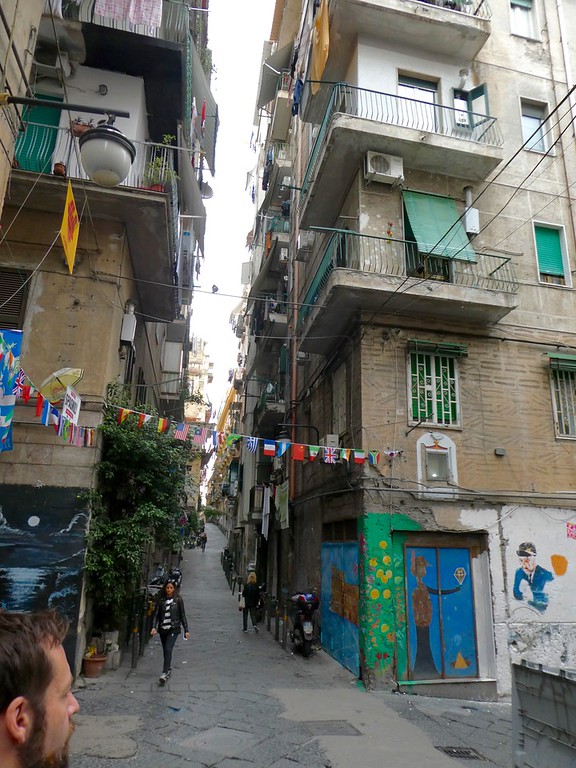 Murals inside a University building 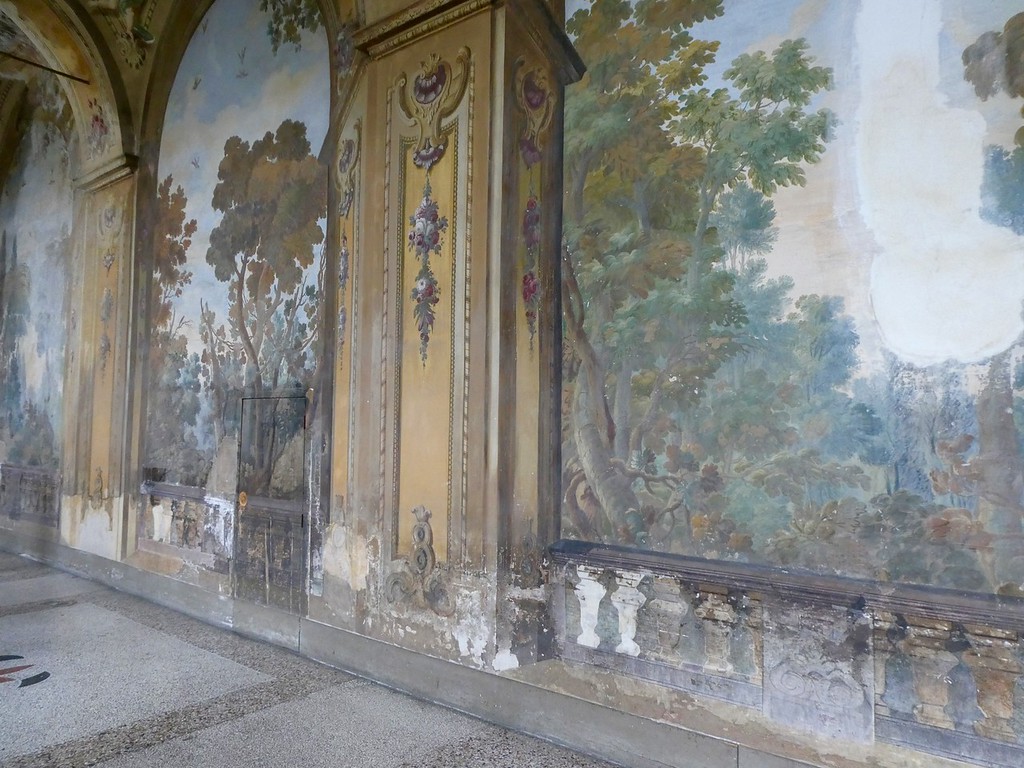 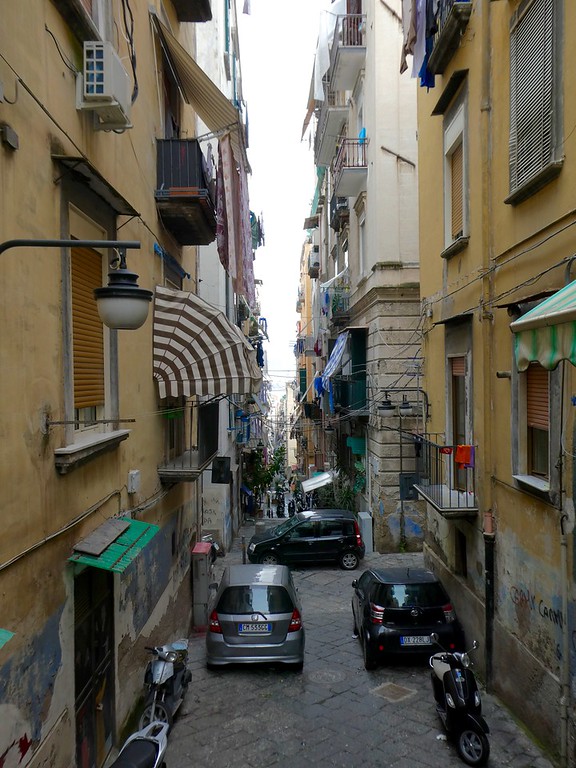 The streets may look cozy and inviting here, but they were anything but. Scooters constantly zipped by, with or without horns beeping. Cars would occasionally go past, taking up the entire road, people strolled by in oblivious groups and the uneven paving stones all joined together to create an any-but-relaxing time.

My very own piazza, Monumento a Dante 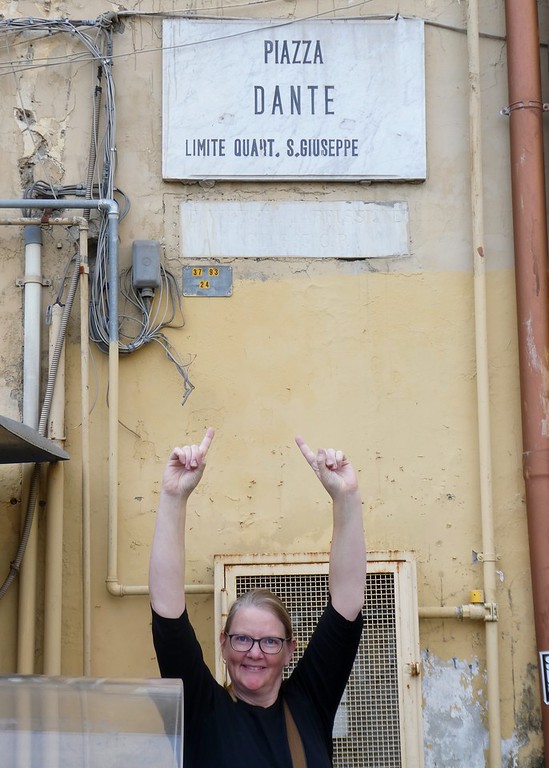 On one side of the above Monument there was a covered arcade that was full of book stores and casual book vendors. Tables lined both sides of the way, covered with literature of all kinds. Unfortunately by now I was getting a little “peopled out” and wasn’t able to fully appreciate it. I really was ready for a break from the crowds. 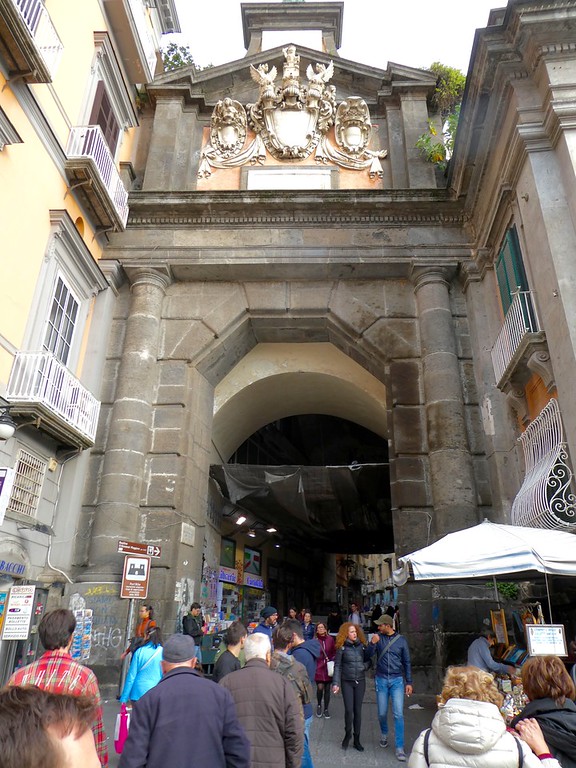 The quiet street behind Piazza Dante 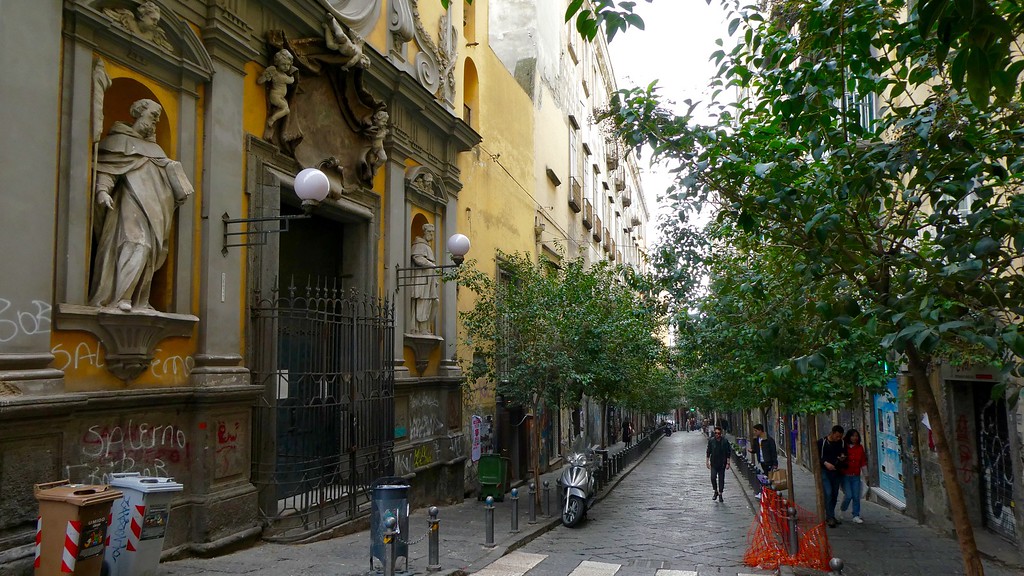 We were back at our hotel. It was amazing how deliciously quiet our room was. We kicked back on the bed and recovered. It had already been a long and busy day. 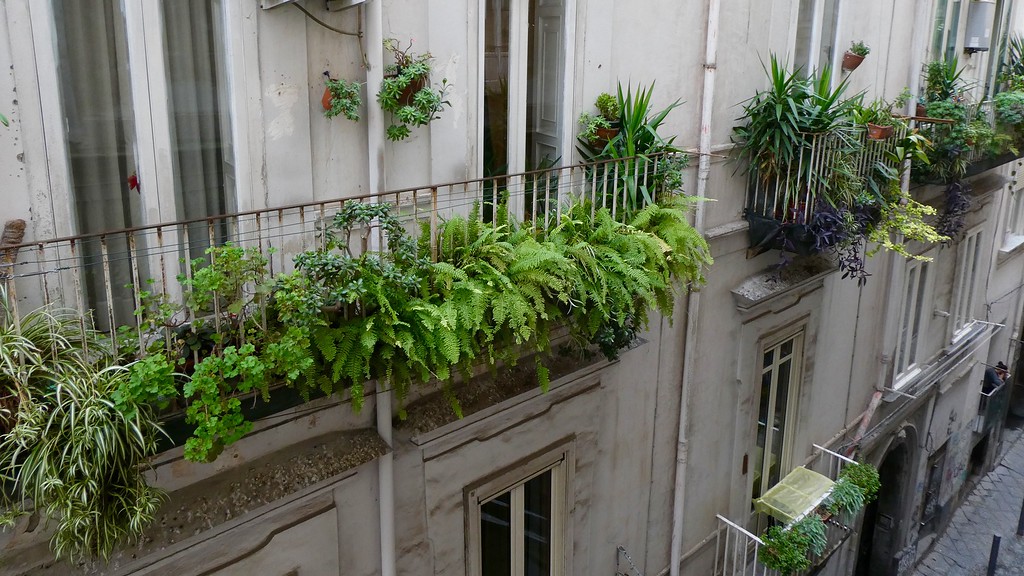 The breakfast room at Hotel Decumani 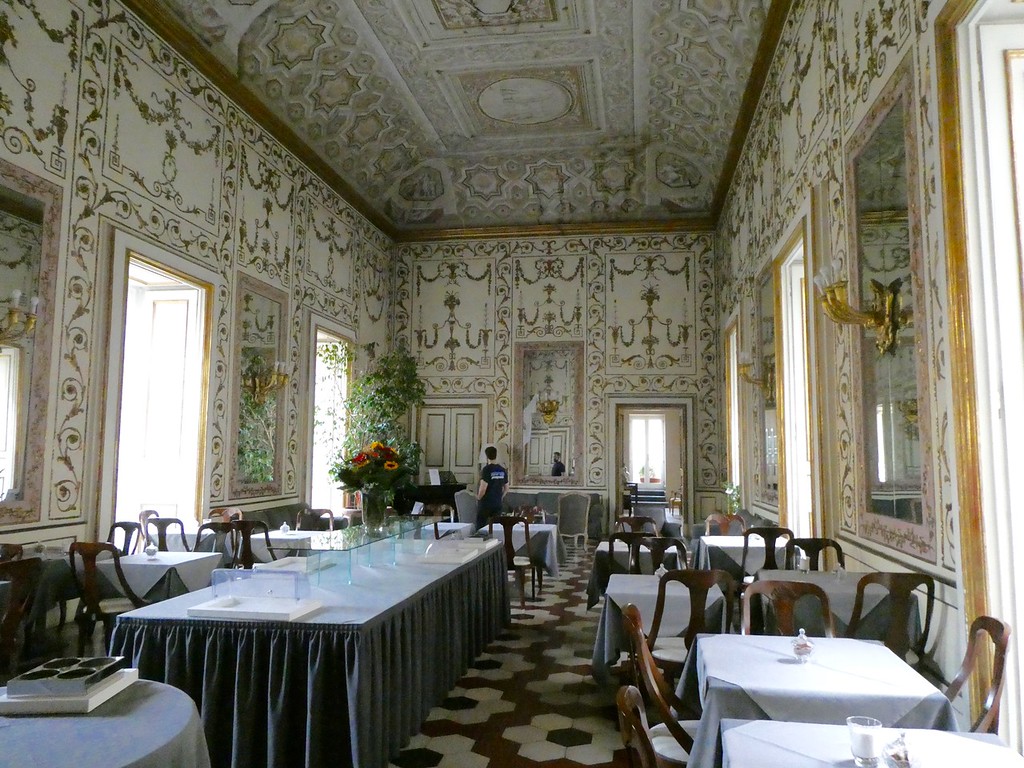 It was difficult to motivate ourselves to go back out into noise of the city. But dinner awaited us somewhere out there and it was up to us to find it! 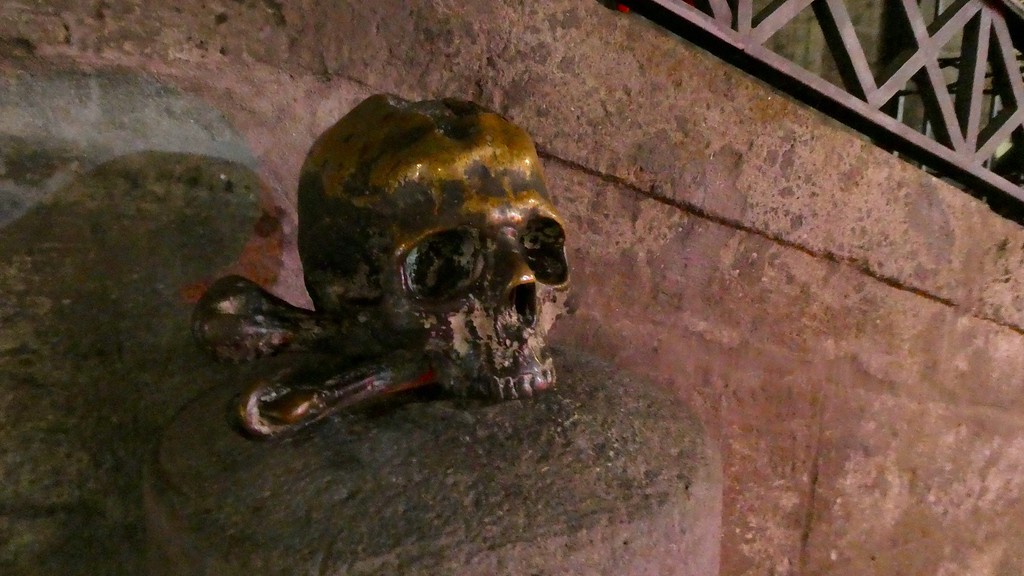 I would love to know what’s behind this door

We walked around more than we thought we would. One of the pizza places that had been recommended to us had a line of customers down the block. It might have been good, but it couldn’t have been that good! We ended up walking back down towards the waterfront, but we were too early for the restaurants that had the best reviews. We took a chance on another pizza joint (Masteri Pizzai), figuring that we were in Napoli – is there such a thing as bad pizza here?

The pizza was divine.

And so ended our first day in Napoli.