Dan and I had some holiday time due but it was already mid-November. Our motorcycles would limit where we could go at this time of year, so I bought us a couple of tickets south, to Italy. Neither of us have visited southern Italy and since we are not fans of summer heat and crowds, this seemed like the opportune time to visit.

Our flight was uneventful. We left Basel mid-morning on a Tuesday, so the airport wasn’t very full – which didn’t stop an old Swiss couple from cutting in front of us in the security line. Oh well. Dan and I shared our row with an older Italian lady, who clearly was not comfortable flying: she clutched her rosary beads and muttered under her breath during take off. Once we were in the air, I moved across the aisle to the empty row there, to both give Dan an the Italian lady some space, but also to give me window access.

They didn’t miss me

Nice view of the mountains

Islands in the clouds

Coming in lower for a landing; let’s check out those wind turbines!

I love this camera’s zoom

Mt Vesuvius from the plane 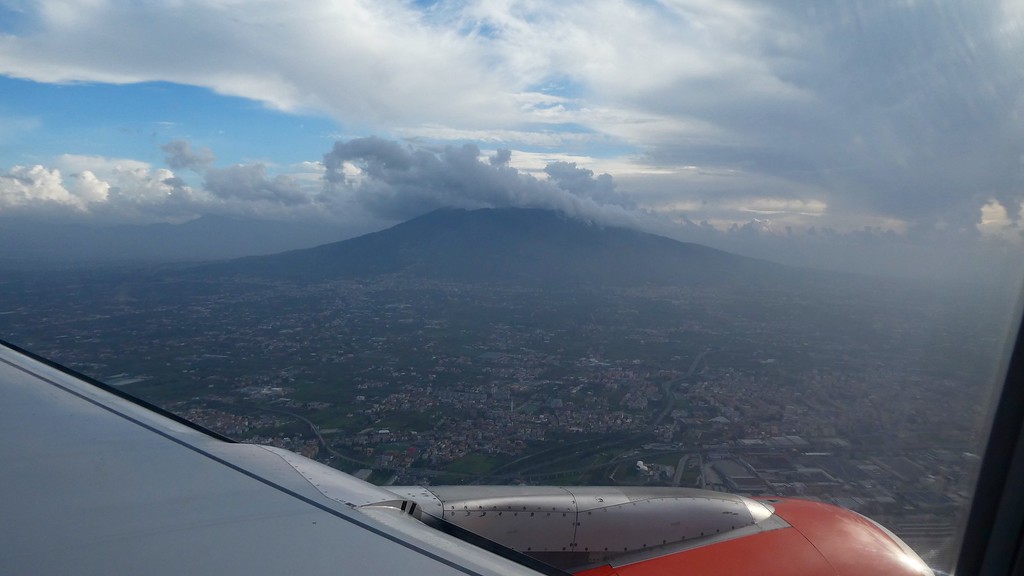 As we taxied to the jetway, a couple of people got up to start gathering their belongings. The cabin crew immediately asked everyone to take their seats, which all but one man did. The gentleman sitting in front of me was already to the aisle, so he paused, looked at the crew at the front of the plane, and instead of retreating to his seat, continued to get his bag from the overhead bin. What a cad. He got the hairy eyeball from me, and an incredulous head shake from the cabin crew.

The Napoli airport was easy to navigate and it wasn’t long before we were outside, waiting for a bus to take us to Napoli itself. While researching this trip, the information I found on the internet was not always accurate so I’ll take the time to include names and prices on some of the transportation and museum entries. From the airport we took the Alibus to Garibaldi station, which cost us 5€ each, and took about 20 minutes. Once at Garibaldi, we wanted to continue on to Pompeii. It was complicated for us to find which Line to take and which track to wait at, but once we did sort things out, it was a pleasant 50 minute train ride for only 2.80€ each. The bus ride to Garibaldi confirmed that I do not want to drive in an Italian city: the traffic was insane, the streets narrow, and cars double parked everywhere. There were tiny shops that opened right on to the street, reminiscent to my time in Mexico. It was definitely a different culture than what I was used to.

Waiting for the train to Pompeii

By the time we arrived in Pompeii it was dark. We trundled down the street from the train station and looked for our hotel. Google maps gave us an area to look in, but there was nothing there. I finally gave up and asked someone that was walking by. She was able to immediately give me directions; it was a another block further and down a different street.

Hotel Piccolo Sogno – I had found it on a TripAdvisor search and it had good reviews, mostly about the friendliness and helpfulness of the host. What I really liked about it was its location: right in the city and an easy walk to the archeological park. That’s really all I was looking for for this leg of the trip.

Our host greeted us warmly and offered us a choice of rooms. We went with his suggestion to be on the 6th floor with a view of Mt Vesuvius. We hauled our bags into the tiny elevator and then into our room. It was too dark to see a mountain, but we could see the city.

Our hotel – the entrance was around the corner

The room was a no-frills room: clean, but basic. We were ready to enjoy a nice meal but it was still a little early for a traditional Italian dinner. We went out anyways. Our host had suggested Pizzeria Alleria, which was very close and easy to find. The only other people in the restaurant were an American couple and a couple of kitchen staff. It was a pleasant atmosphere, and I enjoyed the quiet – and the pizza.

After dinner we walked around a bit to see what “Pompeii at night” had to offer. It turned out, not much. I found a small store that sold cleaning supplies which had an unusual way of selling bulk detergents that I had never seen before. And down the street from that we found Pub27, a pretty cool place to hang out with a refreshing beverage. The bartender was social and we chatted fora bit while Dan enjoyed a local beer. 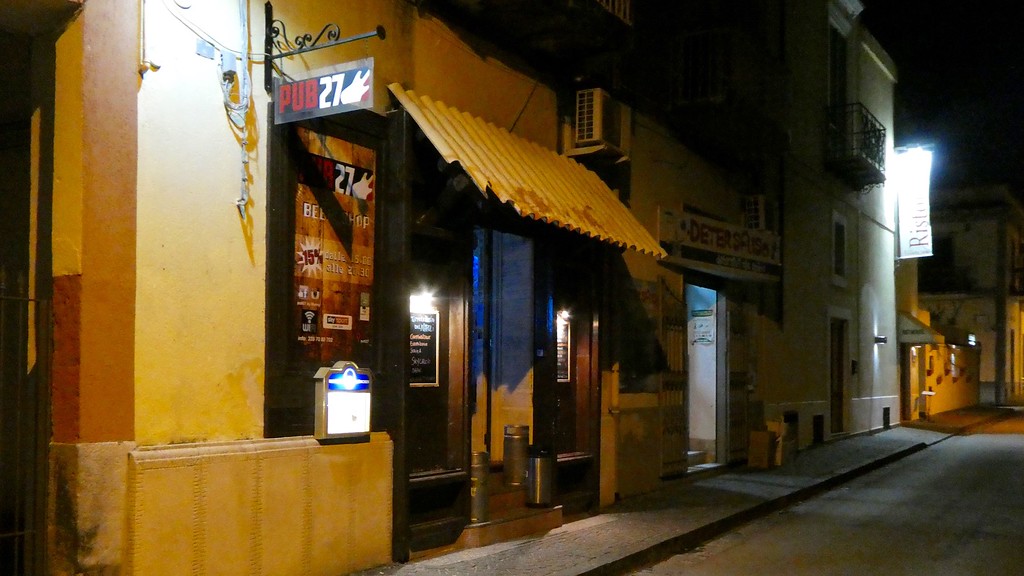 We found a nice cafe on the corner by the big cathedral just as it started to rain. We took a seat outside under the awning and watched the rain pour down, the lightning flash and the thunder boom. Dan ordered an coffee called “Espresso con Panna”, which he understood to be an espresso with a bit of cream on top. He got more than he bargained for. It was a martini glass coated with chocolate powder, an espresso poured in and then covered in a heavy cream and the entire thing sprinkled with more chocolate powder. It was the fanciest coffee I had ever seen!

Almost daylight during a lightning flash

Eventually the rain let up enough for us to scurry back to our hotel room and retire for the night. Tomorrow we would explore the ruins of ancient Pompeii!