We had found the Forum, the restaurant and the people. It was as good a time as any to take a break and enjoy our lunch. We turned away from the Forum and found a quiet spot on a high curb stone to take a seat. A few people walked by while we ate and it was nice to just “take it all in” on this beautiful day. Dan poked around with a Rick Steves podcast, trying to fill in some of the blanks of what we had seen. There were a lot of blanks, unfortunately, but it was fun to make our own educated guesses on what we were seeing.

The sandwiches were delicious and quickly gone. We actually hadn’t moved far from the Forum, so we headed back to see what lined this large open space. As we saw the columns that lined the Forum, Dan made an observation that the store that sold the columns must have been immense. “Just think of it: Rows and rows of columns!” Yes, I married this guy voluntarily.

Looking across the Forum, north towards Vesuvius 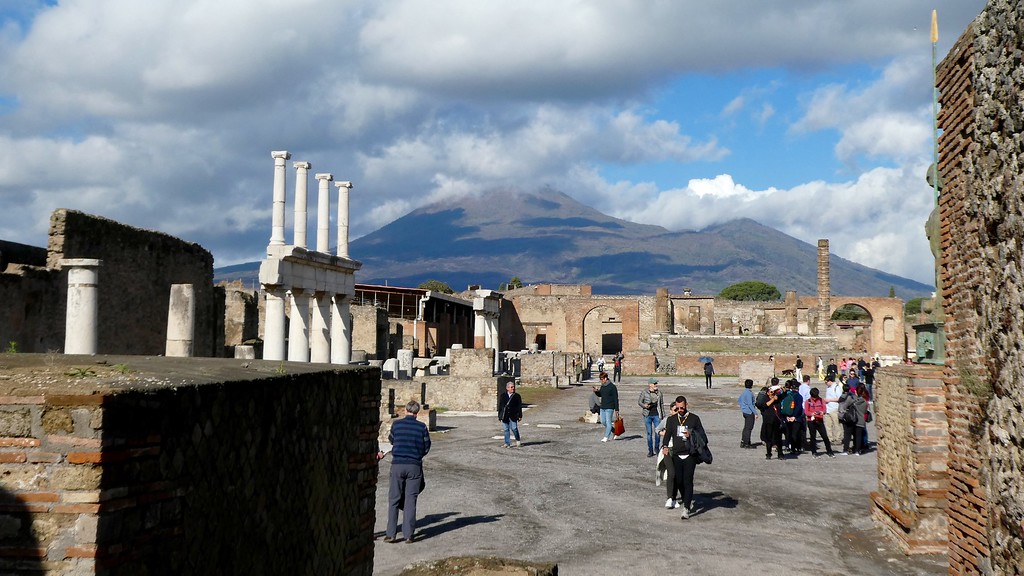 The Forum was the commercial heart of the town. Two and three story high houses, temples, basilicae and porticos defined this prosperous pedestrian space. Some of the identified buildings include the Temple of Jupiter, municipal buildings, the Basilica, Macellum (the city’s main food market), the Temple of Apollo, and the Forum Granary.

The Granary was one of the few buildings with a complete roof, but that could be because it is now used as storage space for various archaeological findings from Pompeii. Amphorae, architectural pieces and plaster casts of victims were stacked against the walls, crates nested up the ceiling and shelf after shelf were laden with Roman treasure. 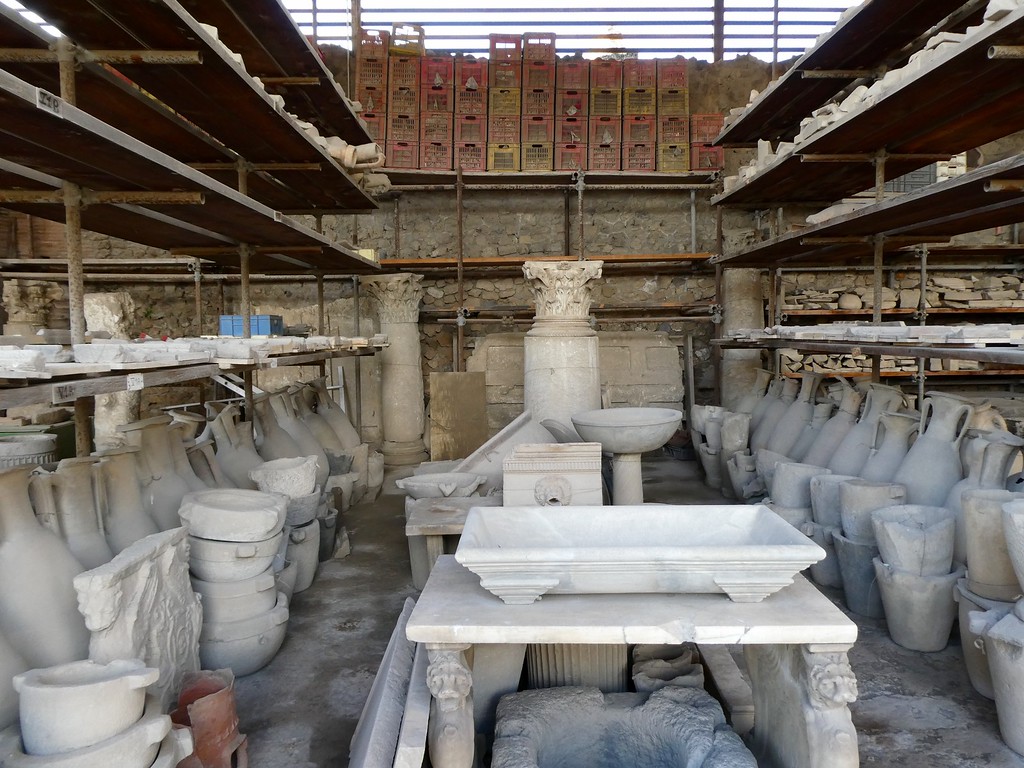 So much to catalogue! 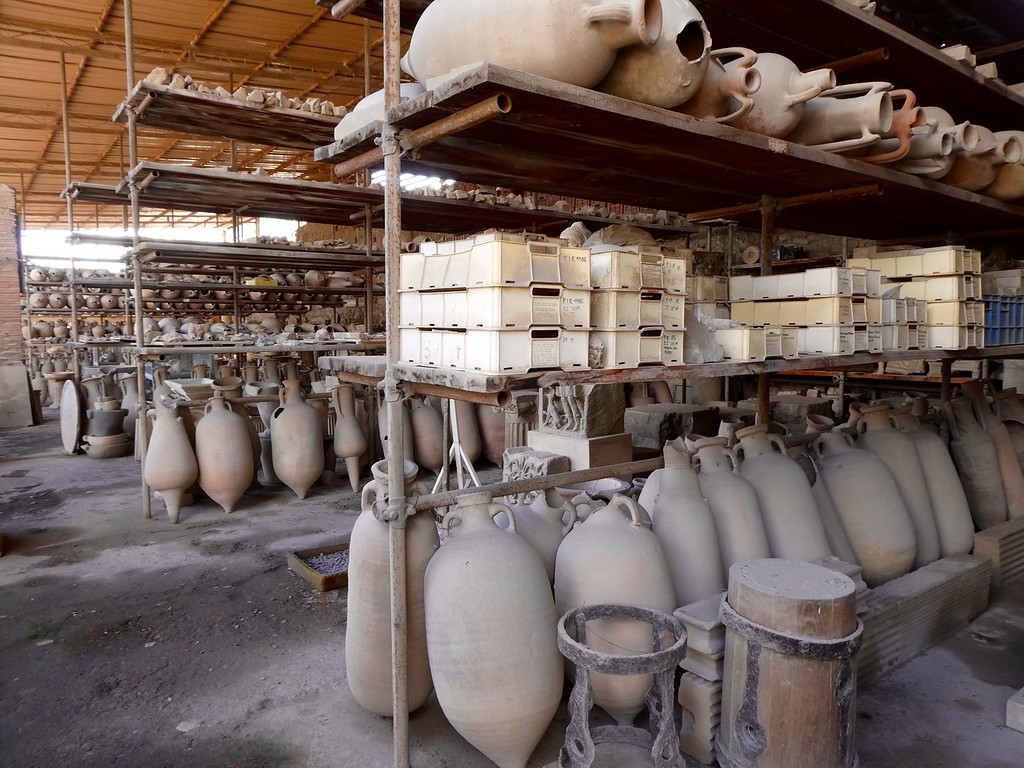 Even a wooden cart survived 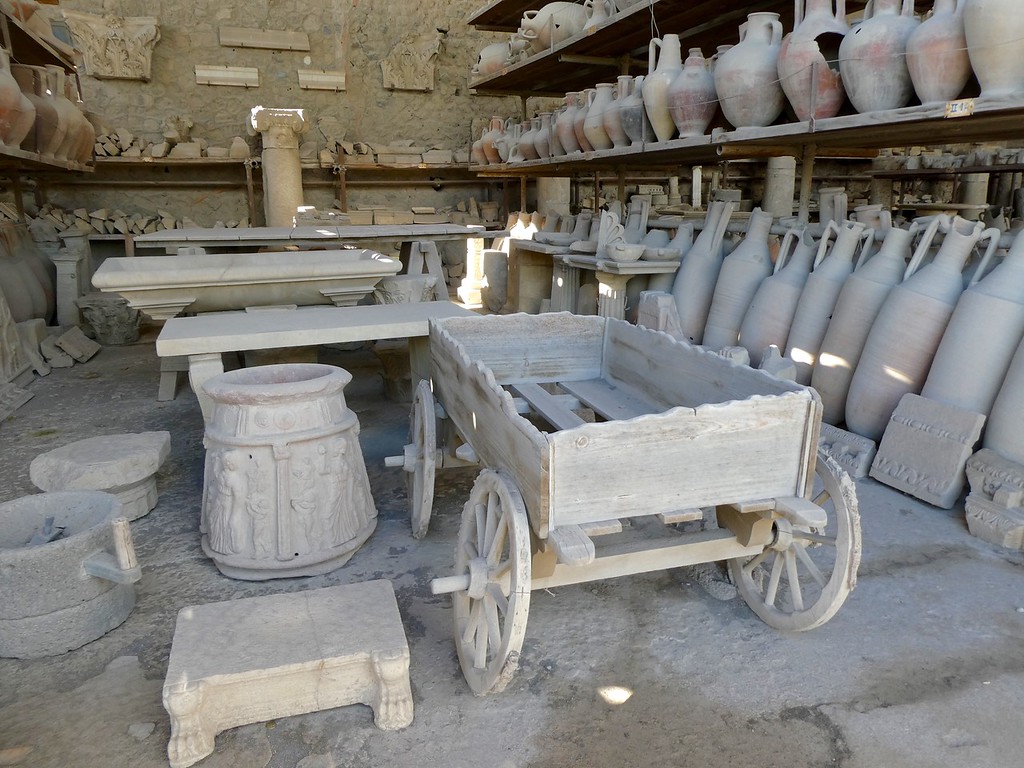 One of the famous plaster casts of a victim 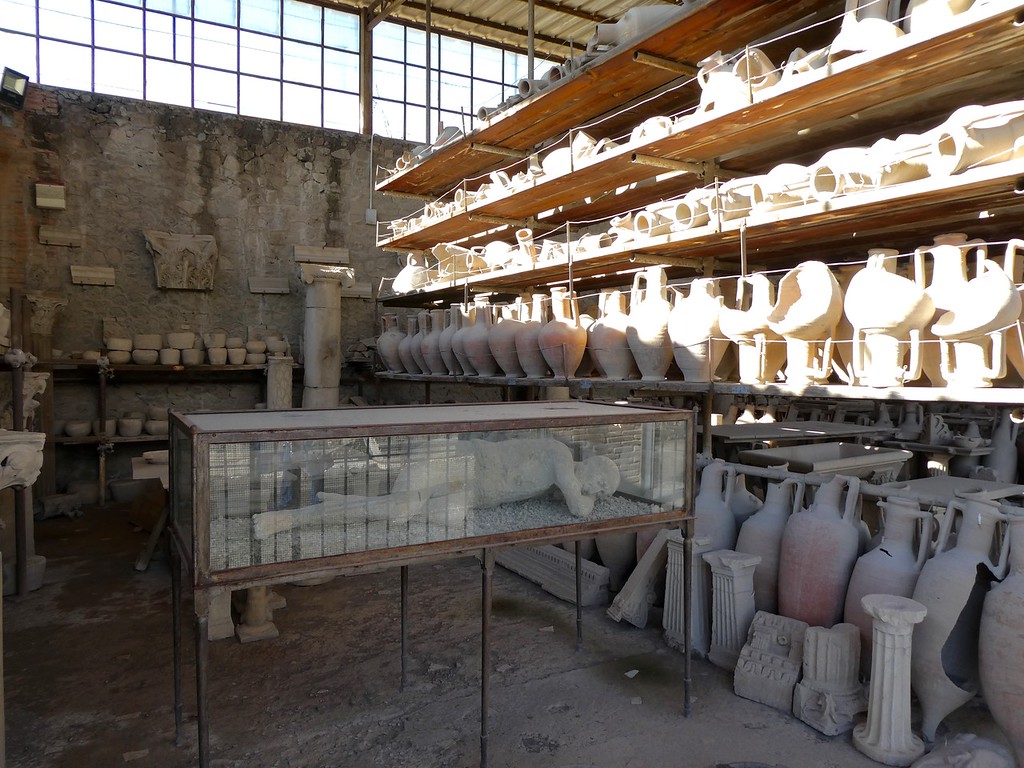 It is fascinating how these plaster casts came into being. The volcano rapidly covered the land with hot gases and ash, trapping the people who took shelter in their homes and businesses. The incredible heat of the eruption caused an almost instant death for the population of Pompeii, leaving them exactly as they were when they took their last breath.

“Many experts believe that, after the initial wave of falling pumice and debris, whipping heat tornadoes washed over the city and instantly killed everyone in the way. This natural phenomenon is called a pyroclastic surge. According to this theory, the victims in the fetal position didn’t end up that way because of a slow and drawn-out death. Instead, they’re in what’s called “extreme cadaveric spasm,” when the body’s muscles instantly contract from extreme dehydration.” (source)

As the ash fell rapidly from above, it filled in the spaces around the bodies, entombing them completely. With over three meters of ash covering the city and everything left in it, the town was sealed off from the atmosphere, preserving that day for two thousand years. By the time the site was “discovered” again in 1738, the bodies that had been buried had long since decomposed. What was left were only empty cavities. By pouring plaster into these spaces and then removing the volcanic fill from around it, archaeologist Giuseppe Fiorelli found that he was left with exact replicas of the people who had died there so long ago.

The volcano showed no mercy 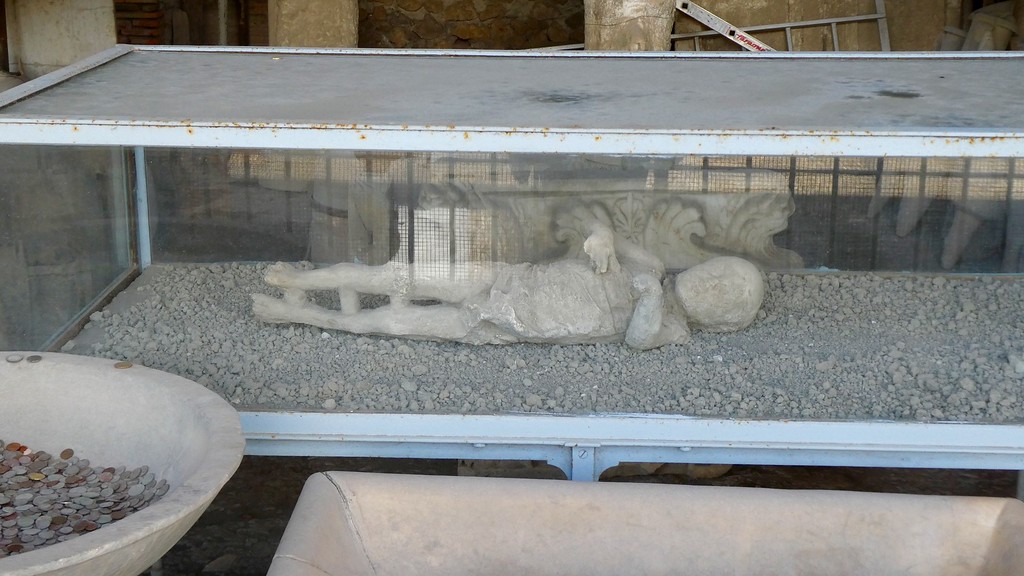 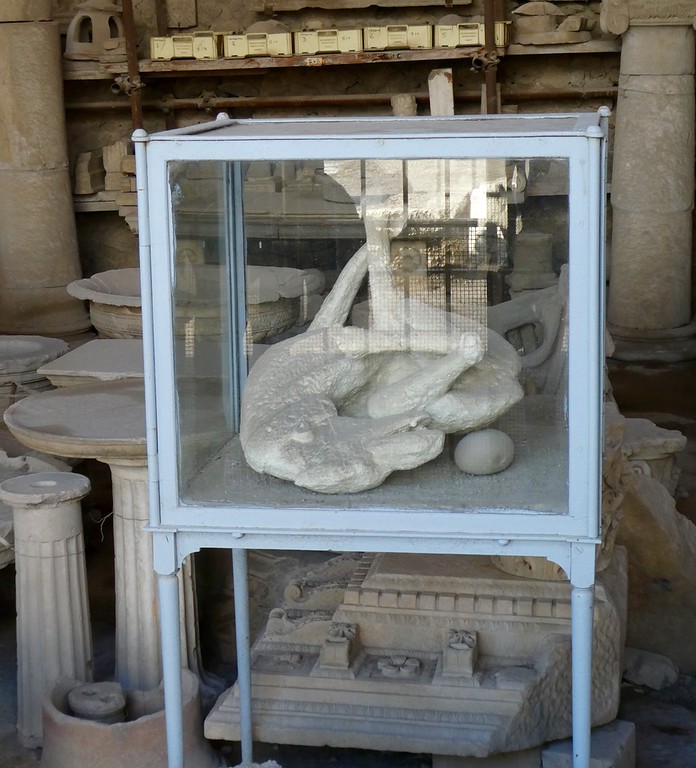 The Granary spanned most of the western side of the Forum, and as we reached the far end, we crossed through the foundations of a couple of temples.

South end of the Forum 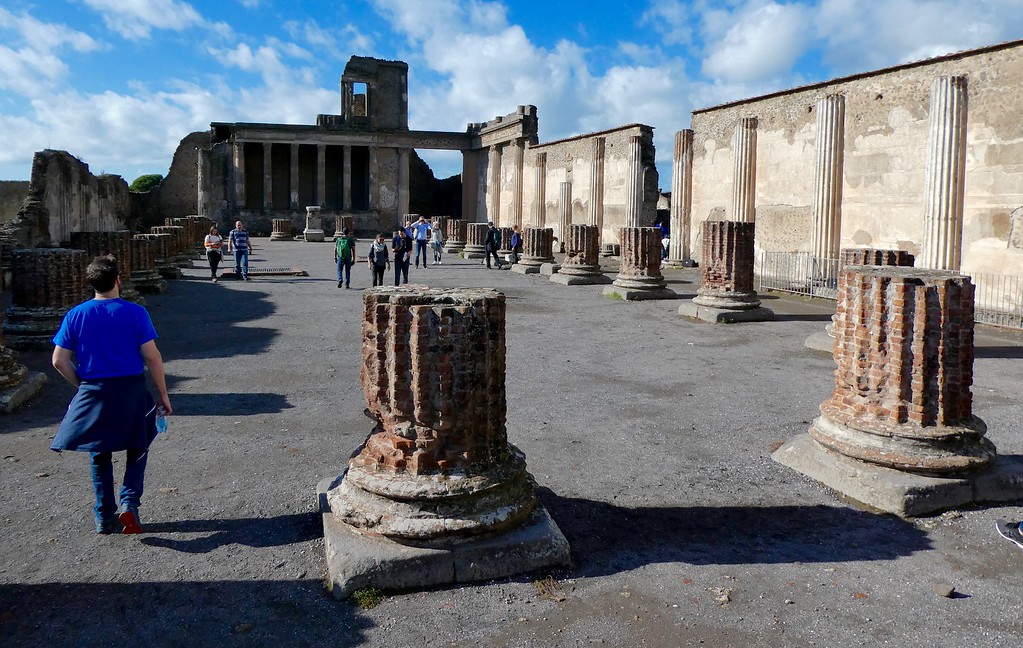 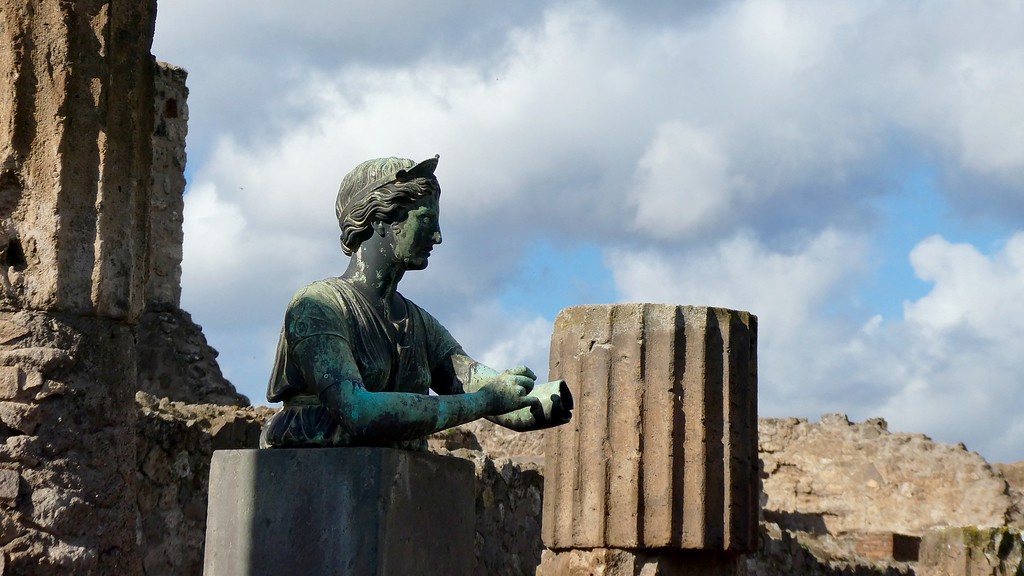 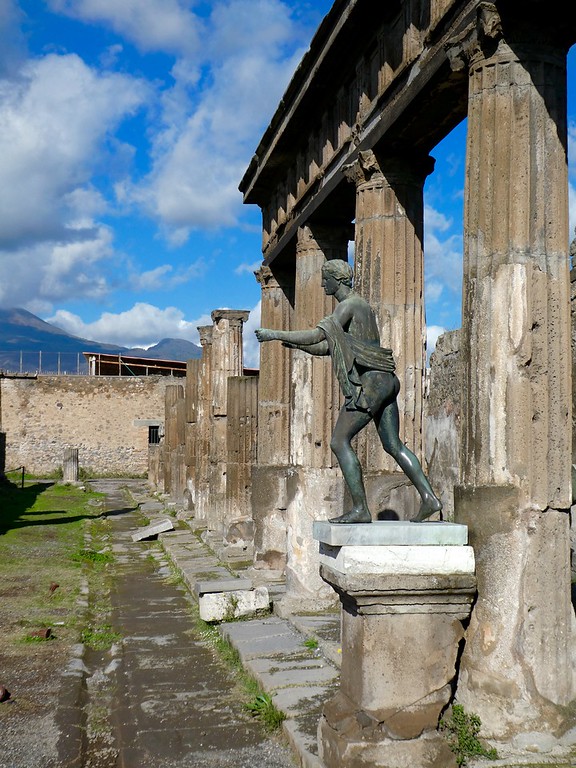 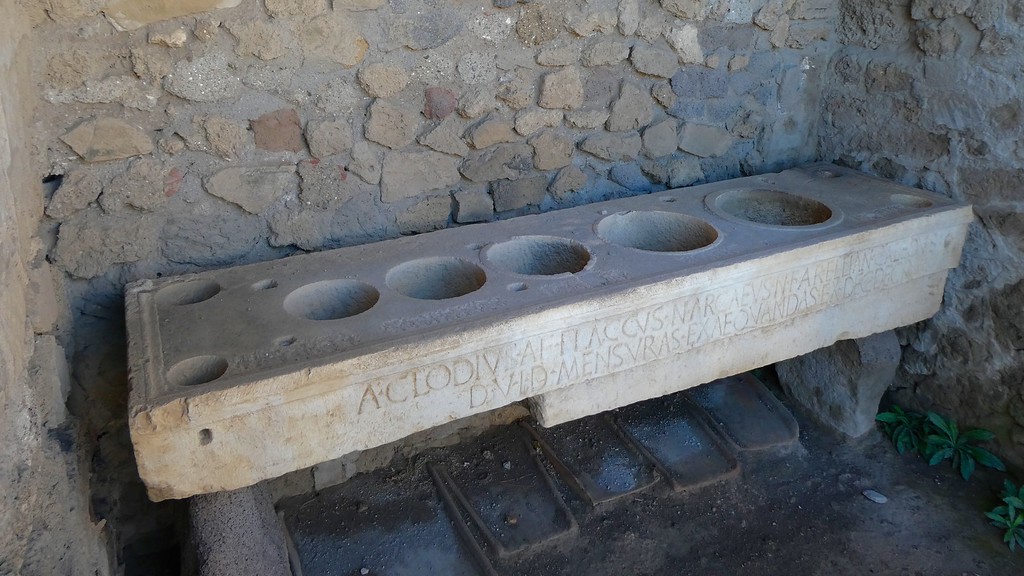 When I first saw the bricks in the ruins, I had assumed that they were part of the reconstruction of the site. However I soon learned that bricks were a common building material and they would have been covered by marble or plaster. Pompeii didn’t have a nearby resource of marble, so many surfaces were actually covered by marble dust that had been formed into a paste. Interesting! This puts a whole new face on this town (yes, I meant to say that).

More storage off the main Forum 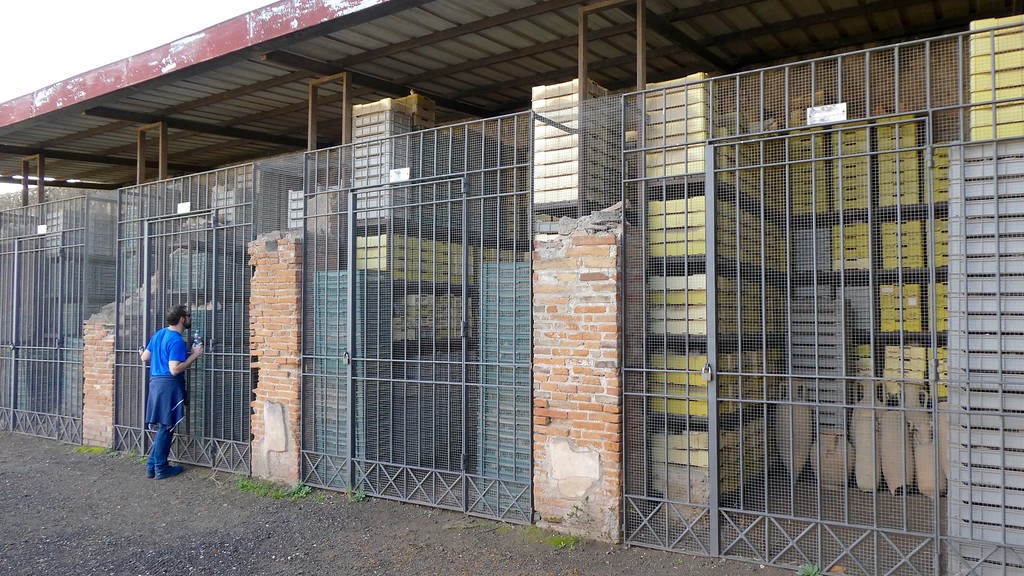 What would have been a marble-covered gate to the Forum

We checked the map given to us at the park gate and angled for a corner that we hadn’t see yet. A few buildings along the way had been opened up for public viewing so we poked our heads in to see what other treasure we might see.

This is an ornate example of a lararium, or a shrine to the household gods; Gods and ancestors were both revered

Detailed mosaic work on the lararium 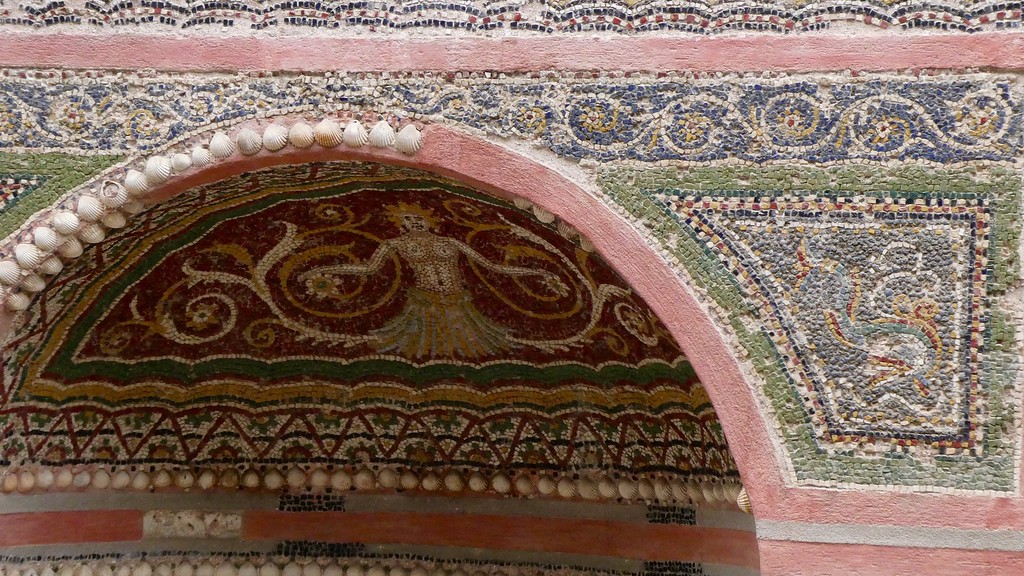 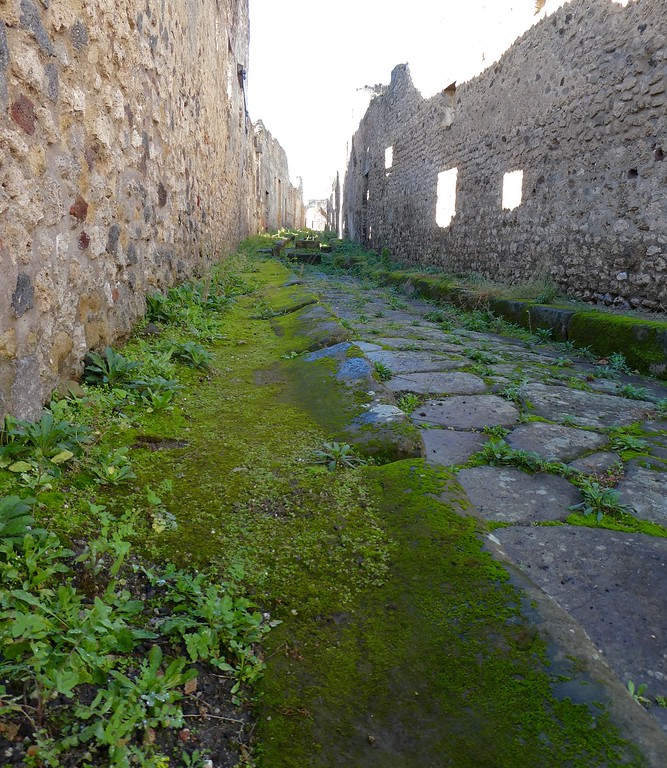 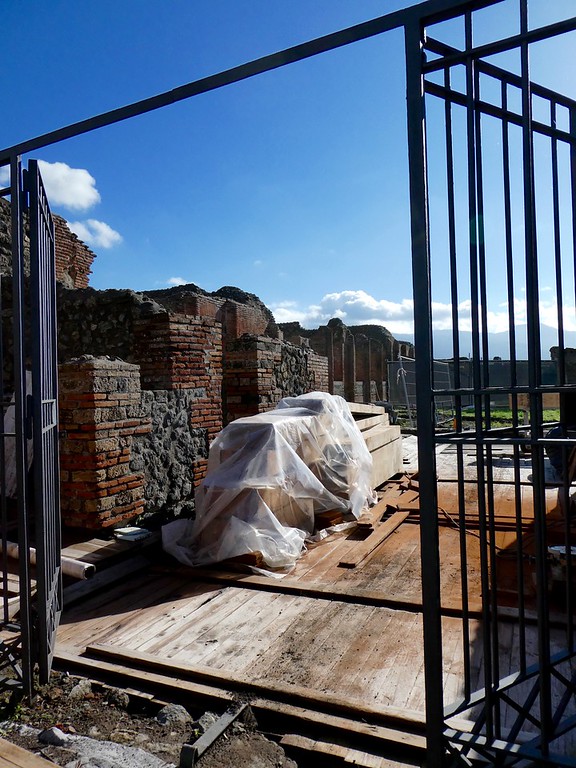 It really was (is) a big place 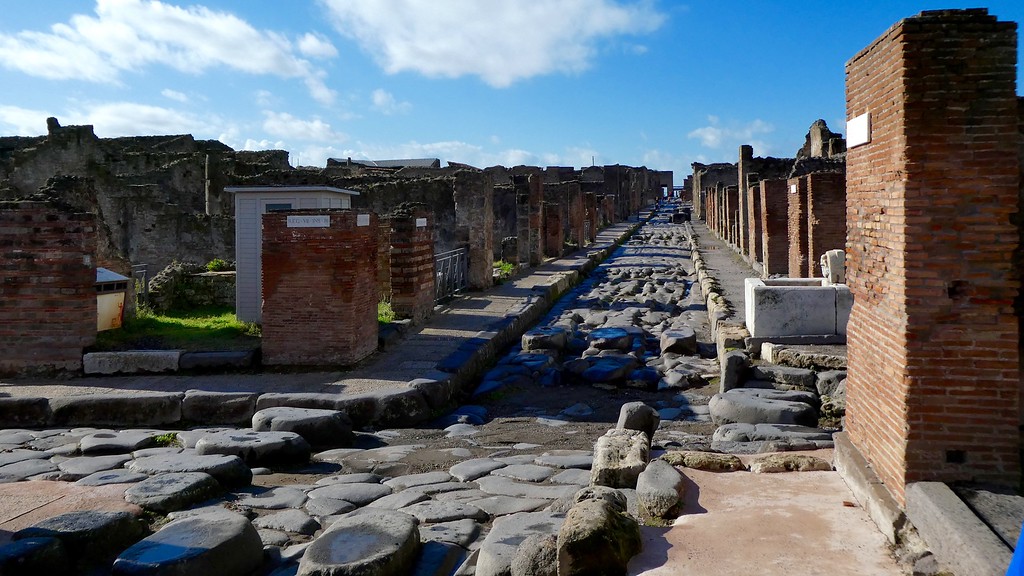 Dan and I eventually reached the northwest corner of the park, to Via Delle Tombe. It was the Necropoli de Porta Ercolana: an area that just outside of the city walls that would welcome visitors from the nearby town of Herculaneum.

Inside one of the structures 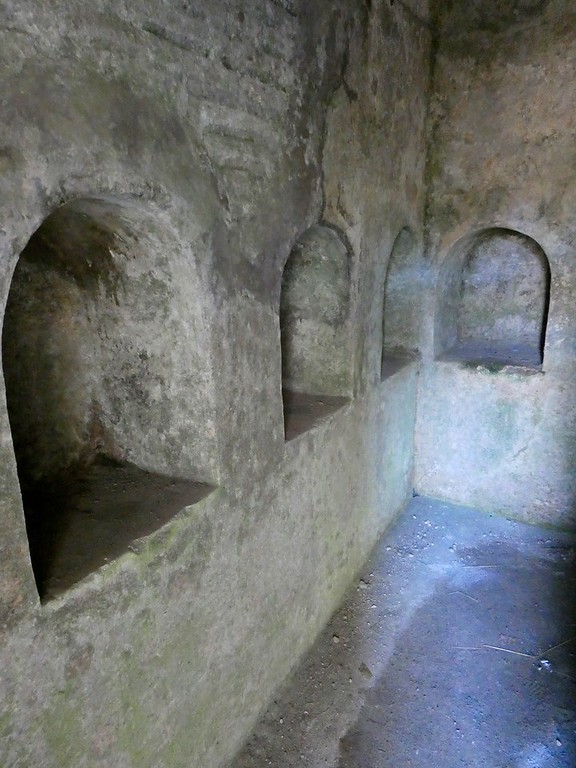 We didn’t want to leave the park just yet, and this path appeared to lead us no where but “out”. Instead, we turned around and looked for some things that we hadn’t yet seen.

More bodies – some of them duplicates, which was surprising to see

We had reached the Porta Marina – the city gate that at one time led to the coast. This seems truly strange,
as Pompeii now stands 2km inland. But prior to the volcanic explosion of AD 79, the city would have been much closer to the sea and the mouth of the Sarno, and around four metres lower. It was a completely different landscape than what we saw before us now.

Looking at the city from the southeast corner 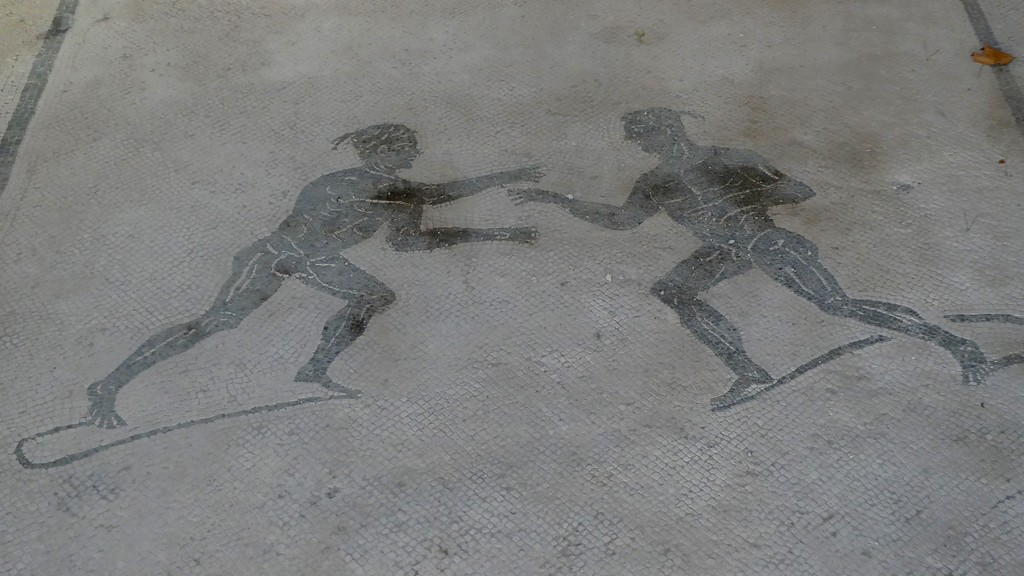 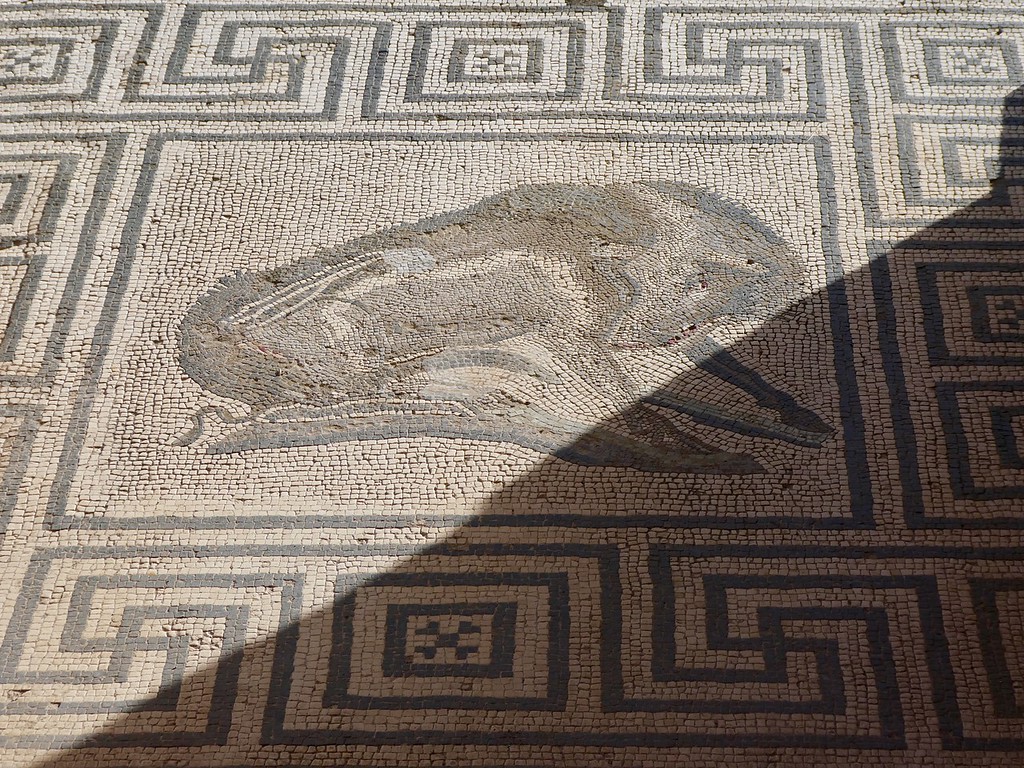 There is a nice little museum near this gate and we popped in to see what they had. To be honest, it was mostly a gift shop with a few items on display, but they also had a little theatre set up giving an informative digital overview of the park and important features. It would have been nice to have started with this knowledge. There was also a small guidebook which, at 6€, would have been very handy to have had on our walk. It felt a little late in the game to buy one now though, so we left without it.

A quick check on our rapidly-deteriorating visitor’s map showed that we had missed a few important sites along the southern border of the park. We shunned the main thoroughfares and kept to the smaller, less-traveled roads. The warm sunshine had brought out the tourists, although I knew that there were still far fewer than I would have seen during peak season. The groups that we saw were primarily made up of Asian and Italian tourists, and covered a wide range of ages. I was actually surprised to see so many younger people in the park, as I had expected to see mostly older visitors.

Just before leaving back through Porto Anfiteatro we stopped at Palestra Grande, a massive open area hidden behind large, solid walls. Inside were some permanent exhibits of items found in the park, including some amazingly preserved foods and plant-based items. These things were instrumental in trying to determine the diet of the population. And they also give a better clue as to when the volcano actually blew.

Someone burnt the bread! 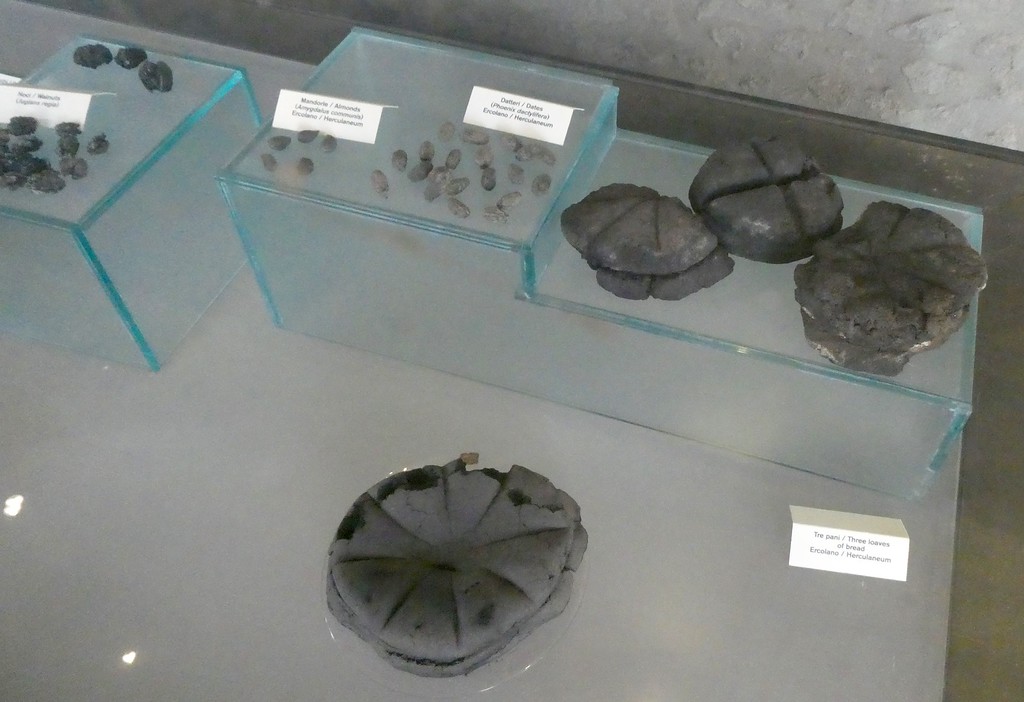 Part of the city wall

We had returned to our starting point. We actually considered checking into hiring a guide and going through the park again, this time with someone to provide answers to our questions. But no: we were done. The park was fascinating but there was only so much that we could take in, in one day. We left the gates of the park and planned to head back to the hotel. 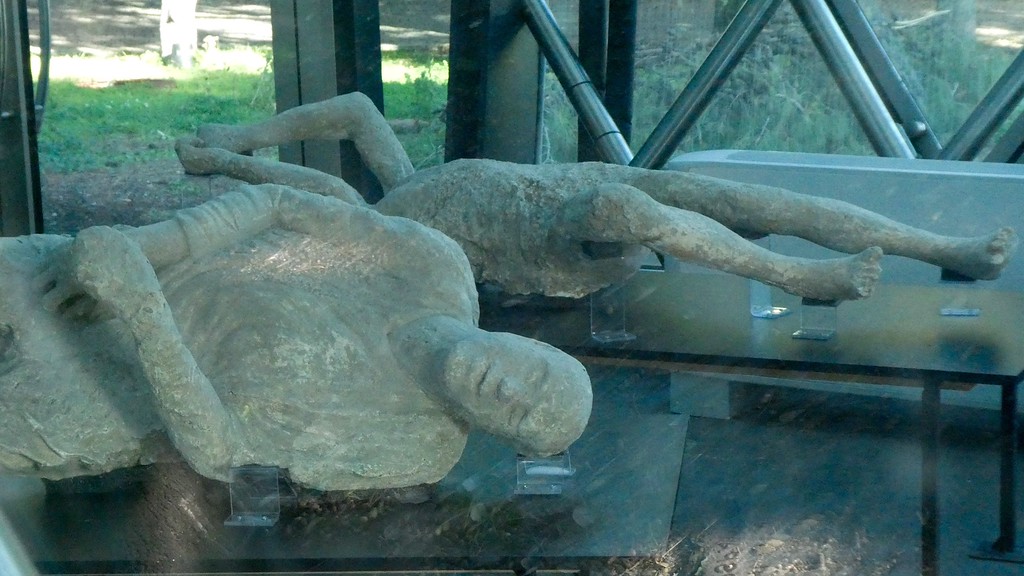 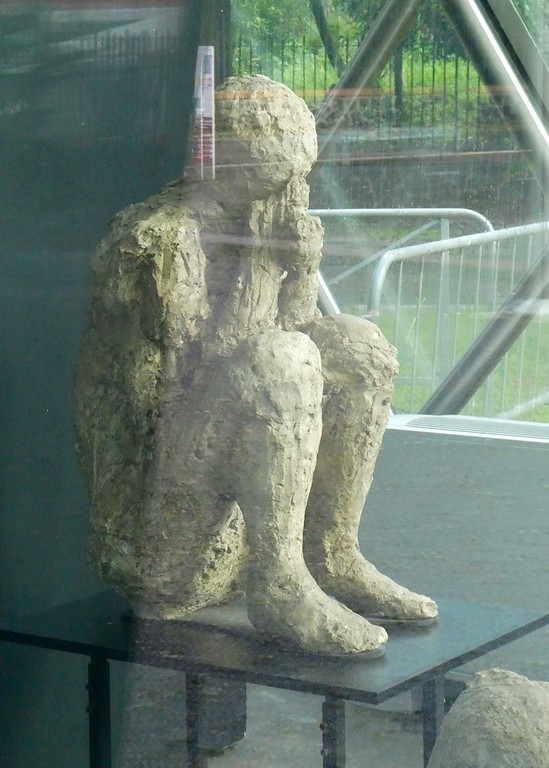 Dan and I looked for a different route back to our hotel, as the town was quite small and we had already seen the same streets a few times. During our explorations we came across a young American couple who had just gotten off the train and were looking for their hotel. We chatted with them for a little bit while we struggled to get through a gate that blocked the quickest access to where we all wanted to go. Once we got through we said our good byes and parted ways. It was a nice diversion in our afternoon, as we really didn’t have any other plans for the rest of the day.

Panorama from our room

Dan and I were at a loss of what to do. There were no (open) museums, the commercial district was small and already explored, and dinner wasn’t for another three hours. We were desperate for something, so we chose the low-hanging fruit: the mall.

The walk there was a little sketchy, on roads without decent sidewalks and through neighborhoods that had seen better days. The mall itself was surprisingly nice: typical stores, a food court and bright lights. As Dan and I stalked the corridors we could find nothing that we couldn’t live without. We are terrible consumers. We did, however, see these awesome animals for kids to ride on. Apparently you can rent one and let your kids ride through the mall on them. Unfortunately, they did not come in Dan Size. 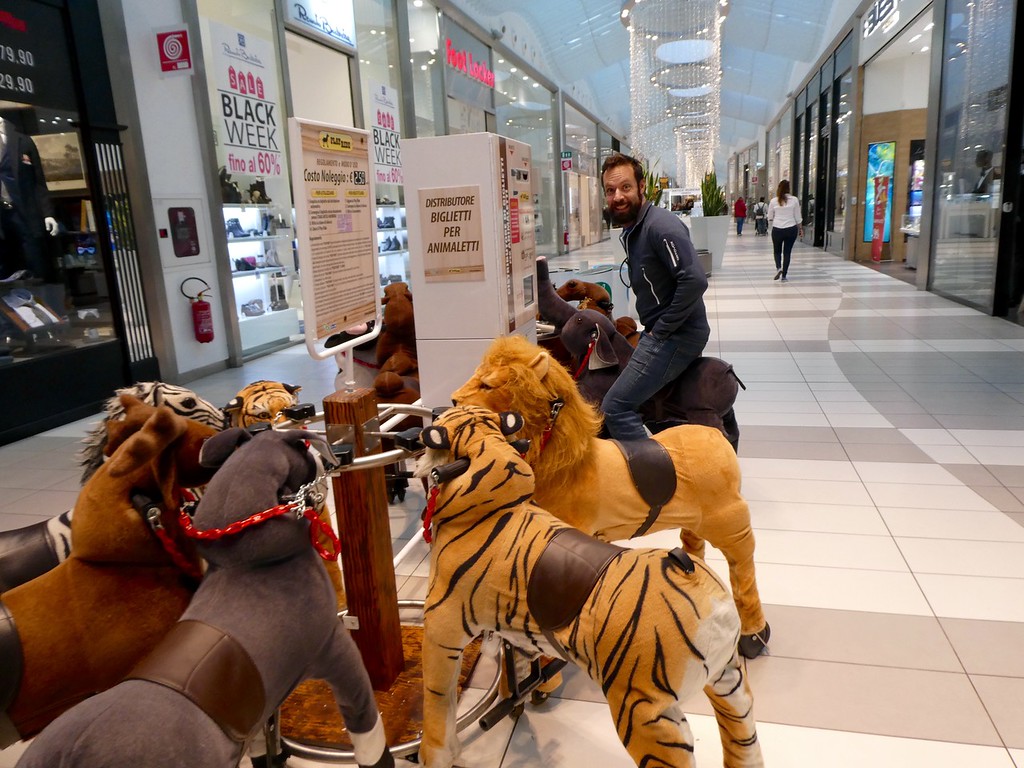 The mall was a short diversion. We went back to the hotel room for a little bit, and then headed out again for dinner. We found a steak house near the train station (Bracery). It was very good – and very big. And I was thrilled to see that the menu listed “baked potato” as a side dish. A real baked potato! I haven’t had one of those since I moved to Europe. As it turned out, the potatoes were cut and roasted; nothing at all like what I was expecting.

The baked potato of my dreams 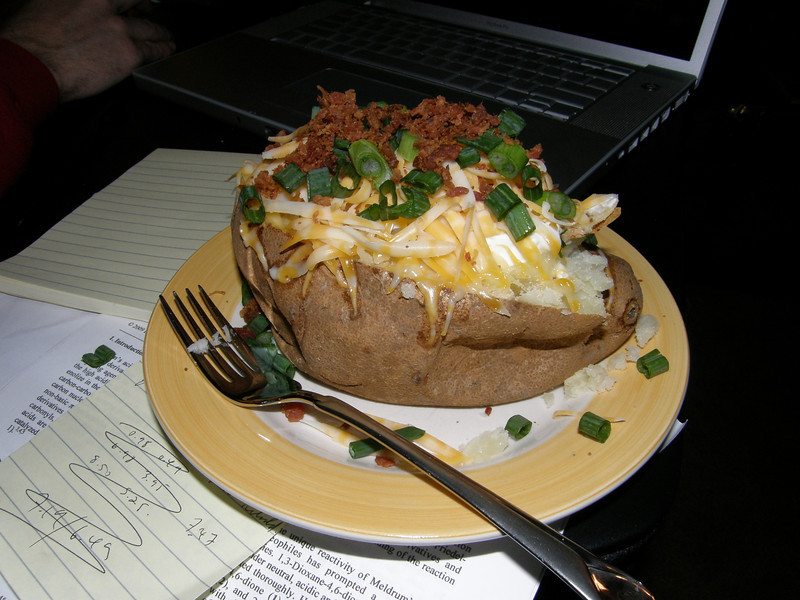 With dinner over, we walked back to the hotel and made sure that our plans for the next day’s adventure were in place. Fortunately I had my Kindle with me, so I read for a while before drifting off to sleep. Pompeii is a very quiet town, when it comes to things to do in the evening.