The day of the concert! Of course, it wouldn’t start for another eleven hours, but still…it was something to plan around. We started our day with breakfast. When we were last here in 2014 we stumbled upon a restaurant called The Breakfast Club. It was delicious and both of us were looking forward to experiencing it again.

We hopped on the Tube and headed north into Soho. It turned out that there are multiple locations for The Breakfast Club and we had chosen a new one. As we wandered the streets of Soho we admired all of the different shops and the general vibe of the neighborhood. Of course, the “vibe” at 9:00 am on a Monday wasn’t terribly vibrant, but there were a number of deliveries being made and a general hustle and bustle of preparing for the week ahead.

The line of people was the obvious sign that we had reached our destination. But not just “a line”, but “a line that was about forty people long”. I knew the food was good, but was it good enough to wait that long? Dan found another recommended place not too far away so we decided to take a chance with the second option.

Bill’s looked nice and there were tables available. We were a little annoyed that the hostess sat us next to the bathrooms and the waitress station, as there were plenty of more pleasant open tables to chose from.

Look at all of those nice, empty tables

Breakfast was served and eaten and we both agreed that it wasn’t that good. Not bad, mind you, but not worth a fuss. Add the sickeningly sweet smell of the bathroom air freshener and we were sad that we didn’t wait in line at The Breakfast Club. Next time.

We spent most of the early afternoon exploring the neighborhoods nearby and I did a bit of shopping, unable to resist the lure of inexpensive clothes. 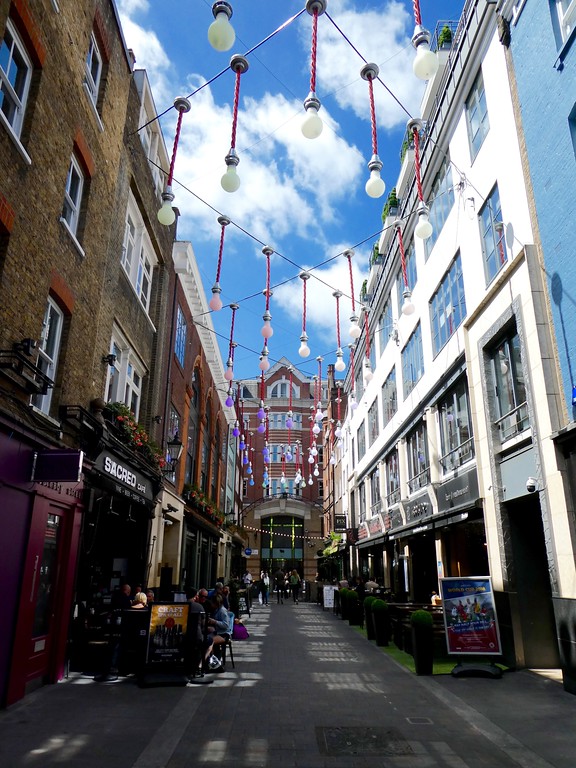 We were surprised to learn that our £10 notes were no longer accepted. The Bank of England had issued new notes and the point of free exchange at any store or bank was long gone. Our only option was to go to the physical location of the Bank of England and see if they would still exchange them for some shiny new notes.

The guard outside of the bank was there to keep people from entering unnecessarily. I told him I had some notes to exchange and he nodded. But he looked at Dan and informed us that only one of us could go in. It was my lucky day and I left Dan standing in the sun while I went through the big, fancy doors.

Immediately inside were two more guards and a scanner. I put my bag down and walked to the other side, picked up my bag, when the second guard asked me my business. Upon answering, he motioned me towards a room off to the side and told me to wait in line. While waiting, yet another guard confirmed what I wanted to do and reaffirmed where I should wait for a teller to become available. Once a teller motioned me forward she immediately asked me which bills I had and how many, and did I want the same denomination back. She soon handed me the new bills and I rejoined Dan outside. And that, my friends, was my foray into the Bank of England. Let’s just hope that we get back to England before the £20 pound notes are replaced in 2020!

I don’t know why we didn’t eat here 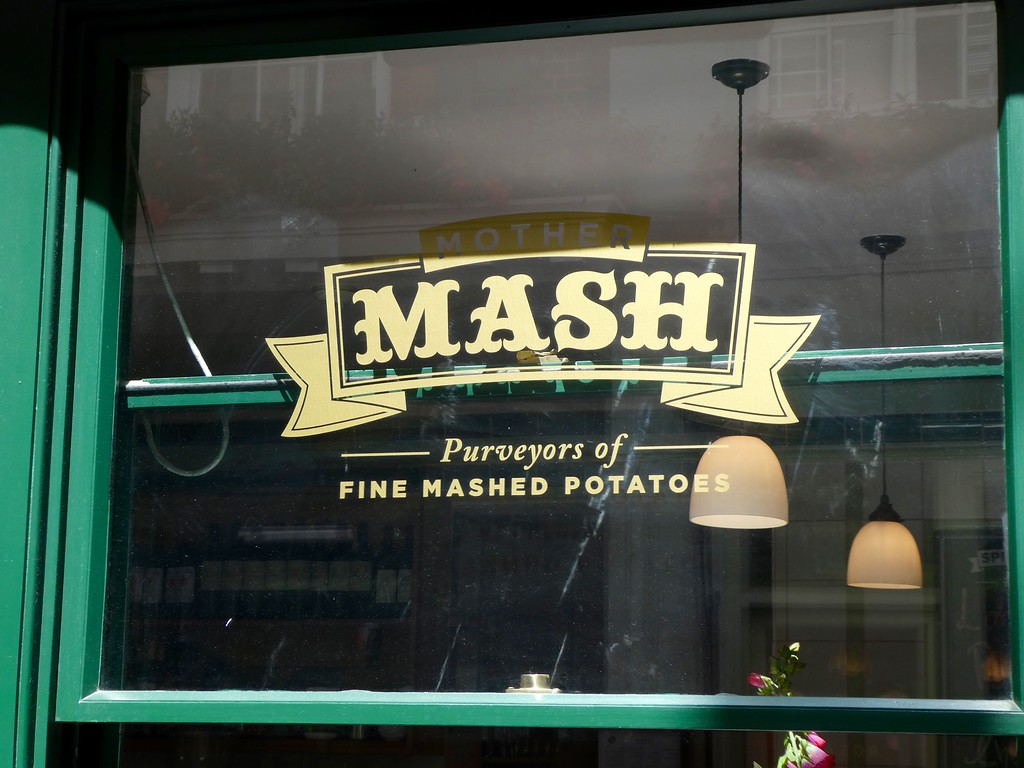 Eventually it was time to eat again. Dan found a place to eat called The Pieminister. We both wanted a good English pie and decided to head there. It took us some time, as it was on the south side of the river in Southwark, near the Borough Market. It was hot. The sun beat down on me mercilessly and the crowds that we found milling around the labyrinth of the Market’s stalls and corridors made getting anywhere a chore. It was a beautiful building and I rued the fact that I was too hot, too tired and too hungry to really care.

The Pieminister was eventually found, and it was found to be wanting. Yes, they had delicious-looking pies available, but they were a food cart, with nowhere nearby to sit and eat in comfort. I was getting grumpy and told Dan just to make a decision and his decision was to go to El Pastor. I was happy to take a seat in the crowded restaurant and enjoy a glass of water while we waited to order some food.

As my mood hadn’t quite lightened, I was annoyed to find that my food had arrived with cilantro on it. As Dan has pointed out, one either loves or hates this herb. I am in the later group. So I picked as much green as possible from my quesadilla and enjoyed what was left the best I could. And there wasn’t much left: these were more like Spanish tapas than an actual meal. But it was good and Dan really enjoyed his meal.

It was time to take a break from the streets of London, so we walked back to our room to rest up for Pearl Jam.

The Tube was packed with people, all heading to the O2 arena in Greenwich. Many people had their old Pearl Jam shirts on, and some wore shirts from other concerts. But we were all heading to see this famous grunge band from Seattle play.

Inside the arena’s concourse 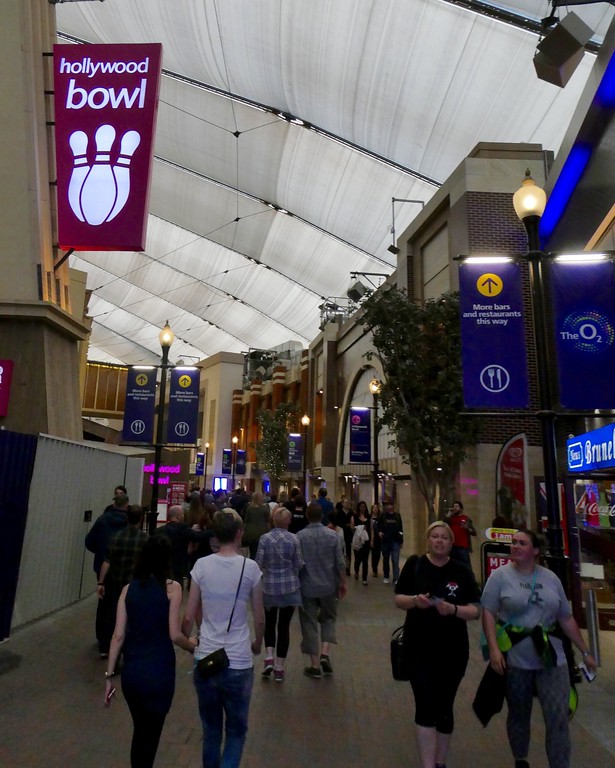 Using the Super Zoom to check out the equalizer 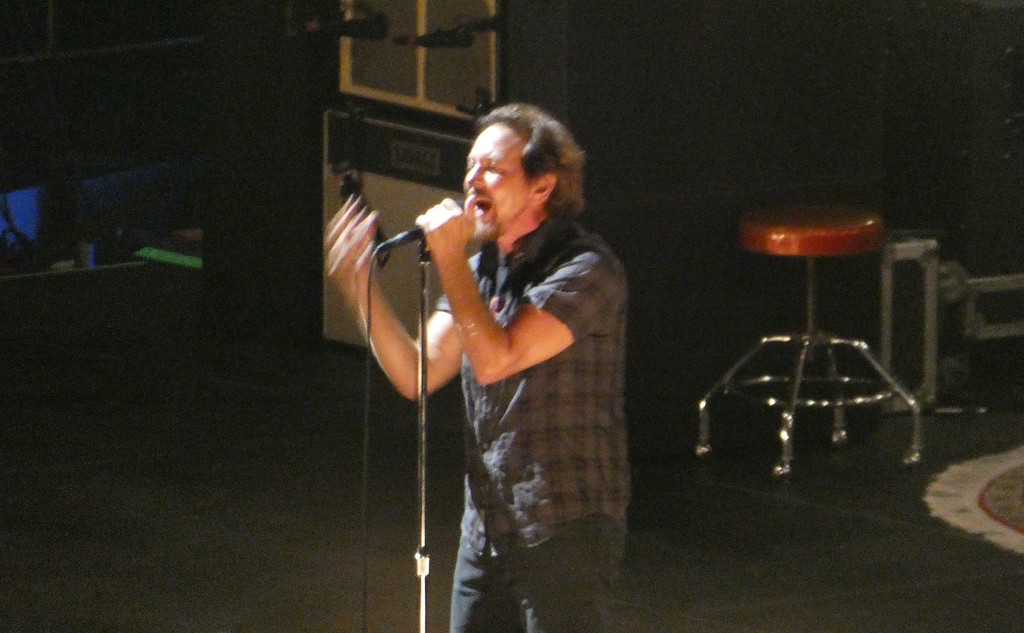 And if you’re curious as to what they sound like, here’s a video I took.

After over two hours of cheering, singing and dancing, the show was over and the crowds flowed out of the arena, ready to queue up for the return Tube ride back. Thank goodness for the English’s love of queuing, or the next twenty minutes would have been miserable.

We totally slacked on our walking tally: we only hit 12 kilometers. And it was our last night in London.