Dan likes concerts. I like Seattle. So when Pearl Jam (a band from Seattle) announced their tour dates in Europe, Dan suggested that we fly to London to see them. That was months ago and now the time had finally arrived to catch our flight to London and face the music.

Sunrise at the EuroAirport near Basel

The flight was easy and comfortable. We had chosen to fly into Heathrow for once, as we didn’t want to waste our time with the hour’s additional travel time from Gatwick. The best laid plans of mice and men…or something like that. Instead, we wasted over an hour in the immigration line. Yes, over an hour. I timed it. The queue was orderly, although it was interesting to see how quickly the employees reacted to pull aside a family when their baby started to howl. Naturally they wanted to keep the other passengers from getting upset at the noise, so they moved in fast. After seeing the entire family hustled up to the front of the line, I nudged Dan and suggested that one of us should start to cry, too. 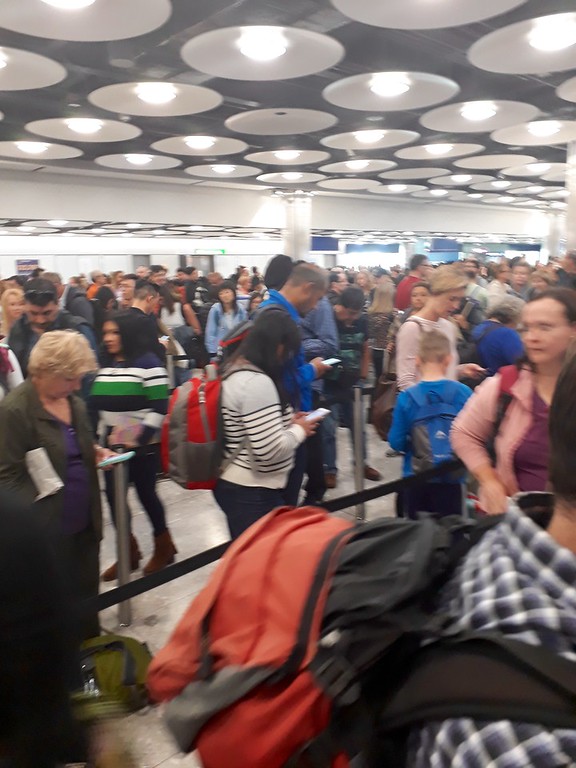 I think the worse part of the wait was revealed when we finally reached the front of the line: of the over 20 or so desks set up to handle the immigration process, only five were manned. Five. The inefficiency was infuriating. Then again, from their point of view they were at the highest level of efficiency: just enough people working to keep their customers from getting irate. Oh well. We finally escaped, bought our express train tickets into the city and had twenty minutes to relax. Never again, Heathrow. Never again. 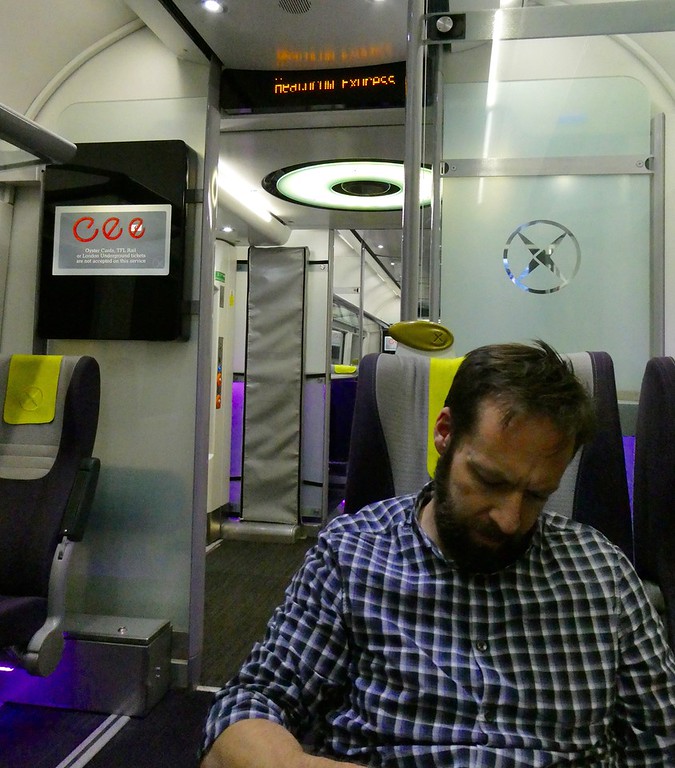 The express train dropped us off at Paddington Station and our hotel was on the other side of the Thames. The Tube would get us there in thirty minutes, but it was a beautiful day and we had just gotten through a very inactive morning. We’d walk instead. It would take us three times as long, but we were here to see London; no reason to delay!

We had been through Hyde Park before, but never this far north and I was surprised to see how wild it was. No smooth, maintained lawns and picnic blankets here. Instead, there were joggers and dog walkers and strollers on the many trails that sliced through the green space. It was definitely an oasis of peace in a bustling city.

And then on to Buckingham Palace

We arrived at the palace while something was happening. Then again, I think something is always happening at Buckingham Palace. The crowds were thick, with knots of people clustered around tour guides spouting off about statues and guards and what-not. We’d seen the palace before so for us, it was just a matter of clawing our way through the crowds and getting to the other side.

Ugh – too many people! 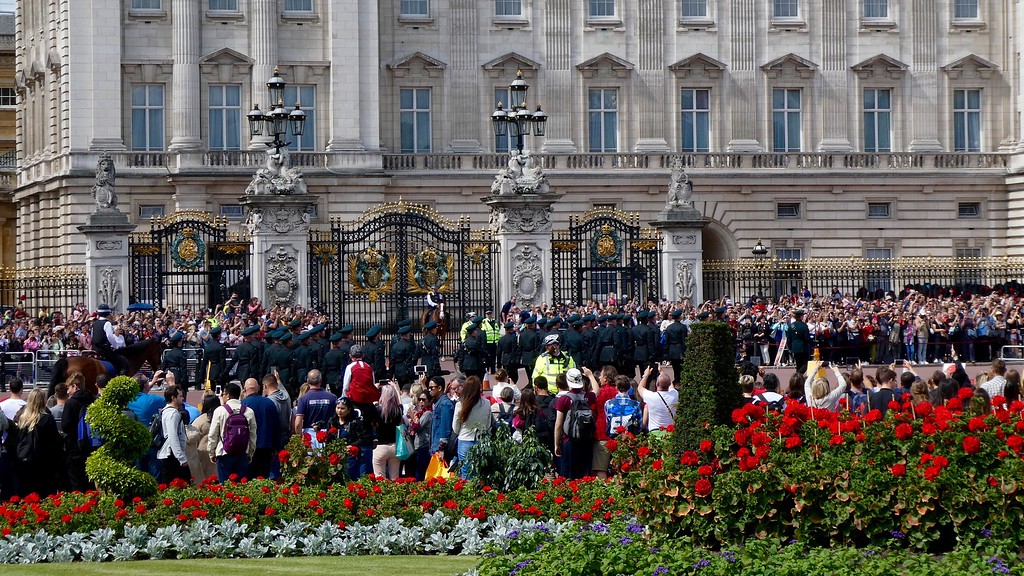 Although we escaped the crowds of the palace, we never really had the sidewalks to ourselves. We were still in the high-tourist area and now found ourselves passing by St James’ Park, Westminster Abbey, and Big Ben.

Big Ben has been silenced. For the next four years, no bells will chime inside the great tower. The clockworks are undergoing major maintenance and repair work (more about the tower and the clock can be found here). Massive scaffolding had been erected, covering up the iconic tower from head to toe and the hour passed by silently.

Big Ben, all wrapped up for reconstructive surgery

One of the things I really enjoy about London is the amazing span of architectural styles and eras. One can walk two blocks and be almost guaranteed a show of structural variety like no other place I’ve been. Old and new, stylish and dull – side by side.

We struggled across the Westminster Bridge and found our hotel after a bit of backtracking. Hotel Marlin was in an excellent location with clean and modern rooms. Unfortunately, we were really early for a normal check in but figured that we could at least drop off our bags. I had put a note in my booking that I would like a room with a nice view (something I annoyingly had to point out to the woman at the front desk) and she said that the current room selection was not very good. However, if we were to come back around 3 o’clock (about a two hour wait), some rooms would become available and there might be something better. That was fine with us, so we dropped off our bags and went out for some fish ‘n chips. Mmmmm – fish ‘n chips. Masters Superfish wasn’t ready to seat us yet (we were too early again), so we walked around the neighborhood some more, taking in the side streets of this lesser-known neighborhood.

When we got back to the hotel there had been a shift change, so I repeated my request for a room with a nice view. I was rather insistent on this “view”, because I had read some reviews that with the right room, there were really good views of the city. The new girl seemed to understand and gave us our room key. It was only on the 3rd floor, but that didn’t mean that there wouldn’t be a view. I was hopeful.

If it had been for just one night, I would have dealt with it. But we’d be here for three nights and wanted something better than this. We went back to the front desk, where a rather futile back-and-forth took place regarding rooms, room availability, inefficient reservation processes and even the suggestion that we “wait a couple of hours to see if a better room becomes available”… and ended with Dan and I retreating back to our less-than-stellar room. We had barely sat down when the room phone rang: the manager had offered us an upgrade – to an executive suite on the 8th floor. Score one for persistence!

The new room (which looked exactly like the old room)

But now we have a view!

So many new buildings going up!

Now that we officially had a room and could rearrange our personal stuff, we headed back out to see more of London. Like usual, we had no plan. We ended up at Trafalgar Square – and based on the crowds, so had the rest of London. The Square was hosting something called Stage Left, where local productions put on “teaser performances” to entice people to come to the theatre.

Preparations for the upcoming Pride in London events

Not too far away from the Square is the Household Cavalry guardhouse and museum. The usual cluster of people stood in front of the two mounted guards, crowding around to pose for photos. Dan and I couldn’t believe how bold people were when it came to touching the horse – including actually pulling on the reins to turn the horse’s head. I kept looking at the sign and wondering what it would take to get the horse to react.

Keeping an eye on London 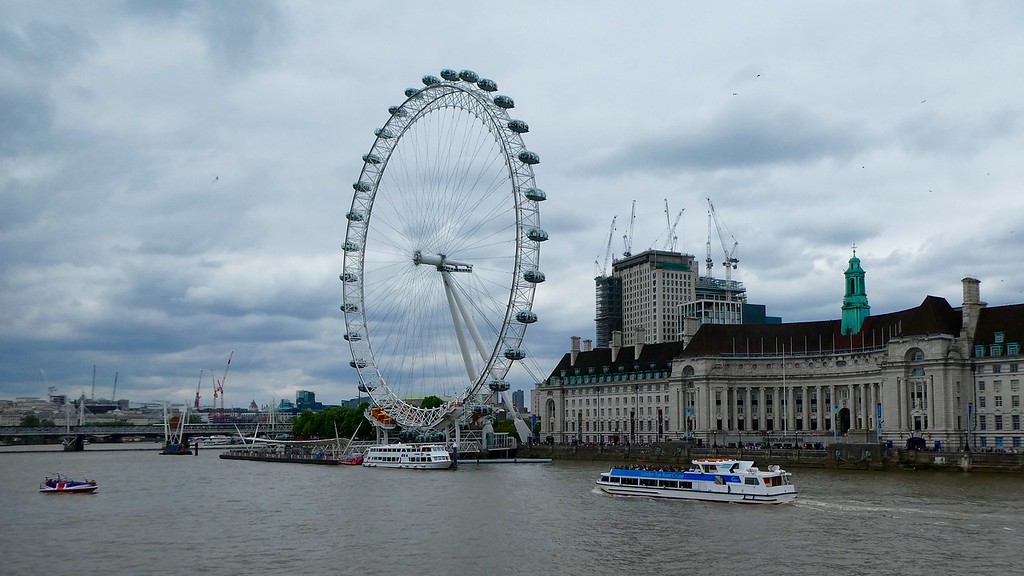 While we were in town for the Pearl Jam concert, it wasn’t until Monday night. We had plenty of time to relax beforehand. Not that we were going to relax on our first day in London. Instead, we found a play that interested us and headed over to the Garrick Theatre to watch Mel Brook’s Young Frankenstein. Off to the theatre district we went!

The play was amazingly funny. The theatre was small and even our last-minute seats had a good view. The acting was great, the story just as expected (from seeing the movie) and the sets were fun and engaging. And the audience wasn’t shy to laugh at the jokes, either. It was a really good way to spend the evening.

I promptly got reprimanded after taking this photo – and rightfully so

The break from being on our feet allowed us to tackle some more of London nightlife. We found the Swiss Court near Leicester Square, generally ignored by the passers by but of interest to Dan, myself and one other person who was taking photos.

And unlike the real world, right around the corner was Chinatown. And just like the real world, I had very little interest in visiting. Of course, my excuse now was that we had walked almost 15 kilometers since leaving Basel that morning and I really wasn’t too keen on adding to that number. Instead we wandered our way back to our hotel room to prepare for Day 2 in London.