It had rained overnight, much to my delight. Day time temperatures were pleasant and the clouds added depth to the sky overhead. Today we’d start with breakfast at a highly recommended restaurant very close to our hotel. We slept in late and eventually meandered our way over to Terry’s Cafe. It was a tiny place, with seating for maybe thirty people inside.

Breakfast was good and the freshly squeezed orange juice was incredibly delicious. We got there just as they opened and as we ate, the place filled up. The service was fast and friendly and it wasn’t long before we left our seat so someone else could use our table.

Dan had mentioned a couple of times about wanting to walk along the river, so we headed north to the bank of the Thames and started to wander. One of the first things I had noticed was this guy, sitting with his matching table, chair and typewriter. The sign read “POEMS Any subject. Pay what you Like”. I thought that it was an intriguing way of making a pound or two and decided to offer up my subject.

To understand my request, you’d have to understand that Dan and I love the TV show Portlandia, and often refer to the “We can pickle that!” episode. The other thing to understand is that Dan has a strange fascination with turnips. Not the food itself, but just mentioning it.

You get the picture. So I walked up to my Shakespeare-on-the-street and said that the poem was for my husband (who was about 20′ away at this point) and that the subject could be pickles or turnips. The man looked intrigued and said “I’ll do both!” He typed studiously for a little bit and the whipped the paper out from the rolls. I hadn’t realized how much I missed the sound of a real typewriter until then. He looked pleased as he handed me the paper and said that he appreciated that it was an unusual request. The poem, as he had typed it:

Hi husband here’s how
we pickle turnips
(or swedes, they say down south…
first find your turnip, try
the grocer’s or some muddy meadow
in foreign field-
jar it up with a litre
of ether (moonshine will do.
got a garden? good.
bury the lot and by
this time next century….
voila!)))

Clearly, formatting was not a priority. I enjoyed the entire interaction and Dan was amused with his poem. I tucked the paper into my bag and we continued our saunter on the riverside, crossing over on the cool Millennium pedestrian bridge 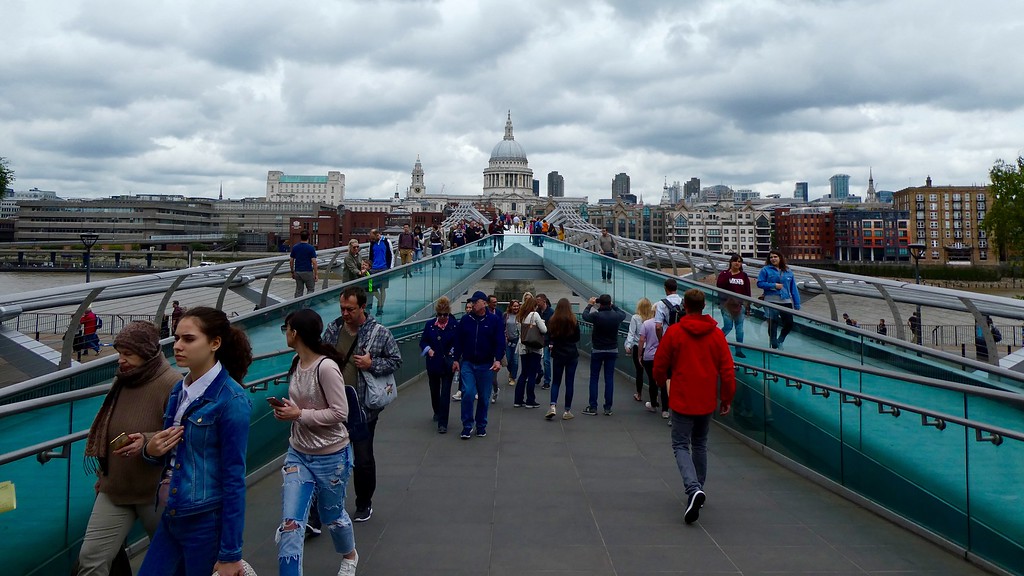 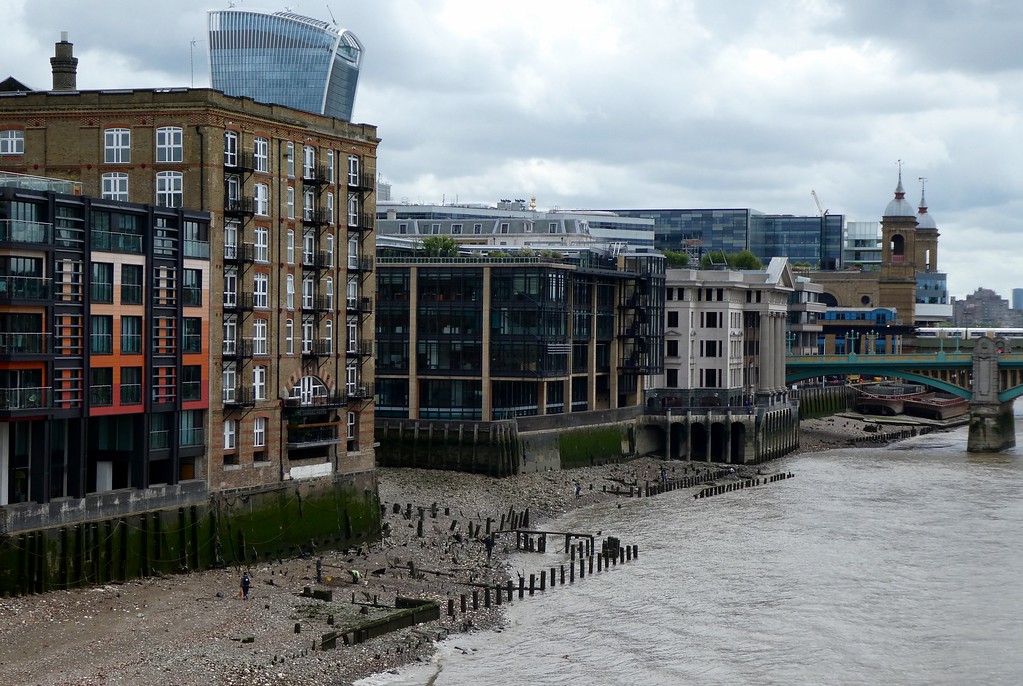 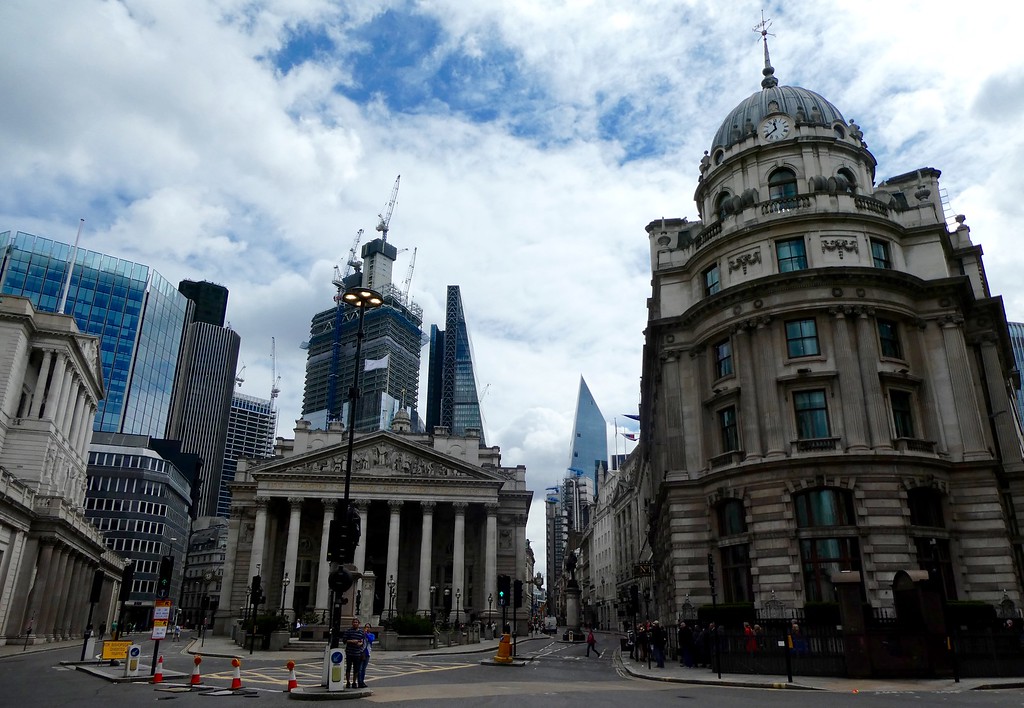 We had reached St Paul’s Cathedral and ran into a crowd of people, many of whom were wearing the same shirt. It was the start of a “City Run: No Limits” race. The idea behind it was interesting to me: there was a short 1 kilometer course blocked off through the city, with every .1 km marked off. Each runner had a tracker on their shoe that would record each marker they passed, and they would run for one hour. At the end of the hour, each individual’s distance was calculated. We decided to follow the race course for a bit. 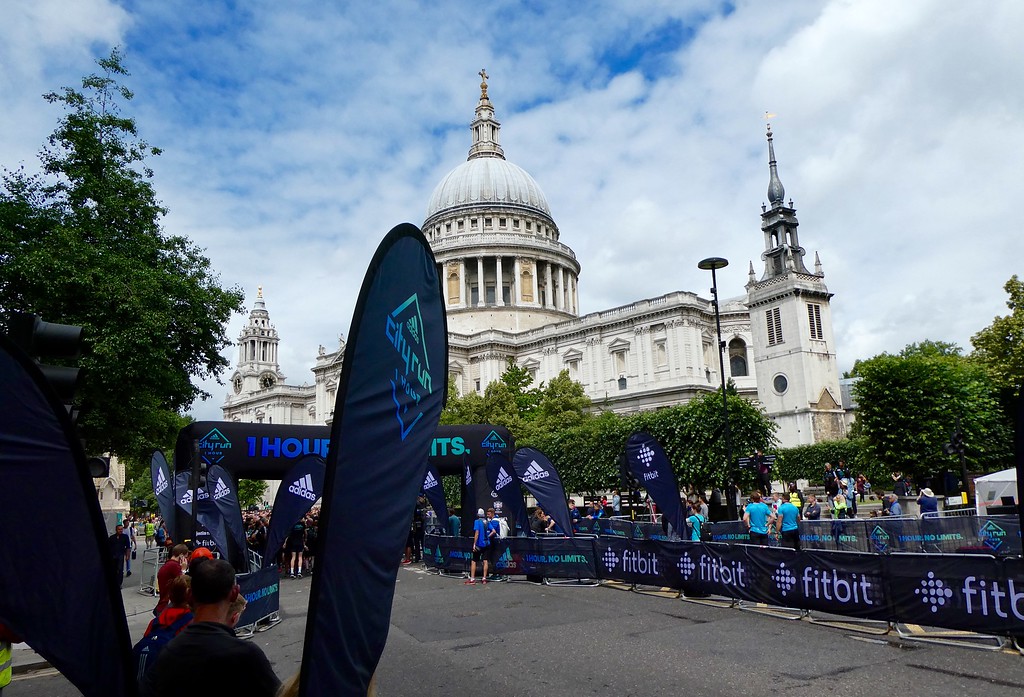 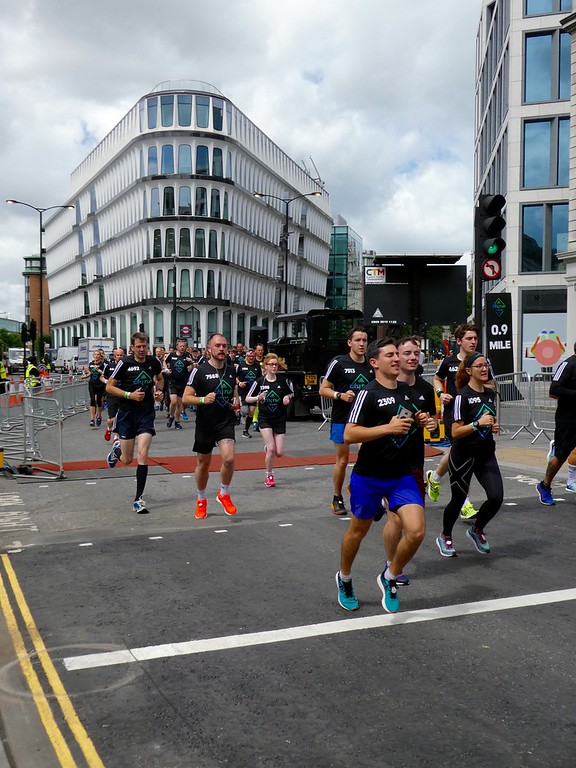 Eventually we got bored with the race and wandered off, in search of the City Museum. I generally like this type of museum and learning about the history of the area I’m visiting. We were very close to it (one of the reasons we chose to go there) and had a little preview with the old city walls that were still standing.

An example of the signage near the ancient walls

The history of the walls was interesting to me, in the fact that they were exposed and therefore easier for me to try to visualize what has happened over the past centuries. As Wiki stated, “During the Great Fire of London in September 1666, almost all of the medieval City of London inside the wall was destroyed. The seven gates to the City of London, with many repairs and rebuilding over the years, stood until they were all demolished between 1760 and 1767. Work to demolish the walls continued into the 19th century; however, large sections of the wall were incorporated into other structures. Some of the noticeable ruins in the bomb-damaged City during the Blitz in the Second World War were remnants of London’s city wall.” Cool stuff!

By the time we had reached the doors of the museum, Dan had done his online research on the museum. It rated high marks – but for kids. He read off some of the reviews and I could easily see how it would be good for kids, but not so interesting for us. I agreed that we didn’t have to go in and could continue to explore the city on our own. And so off we went! 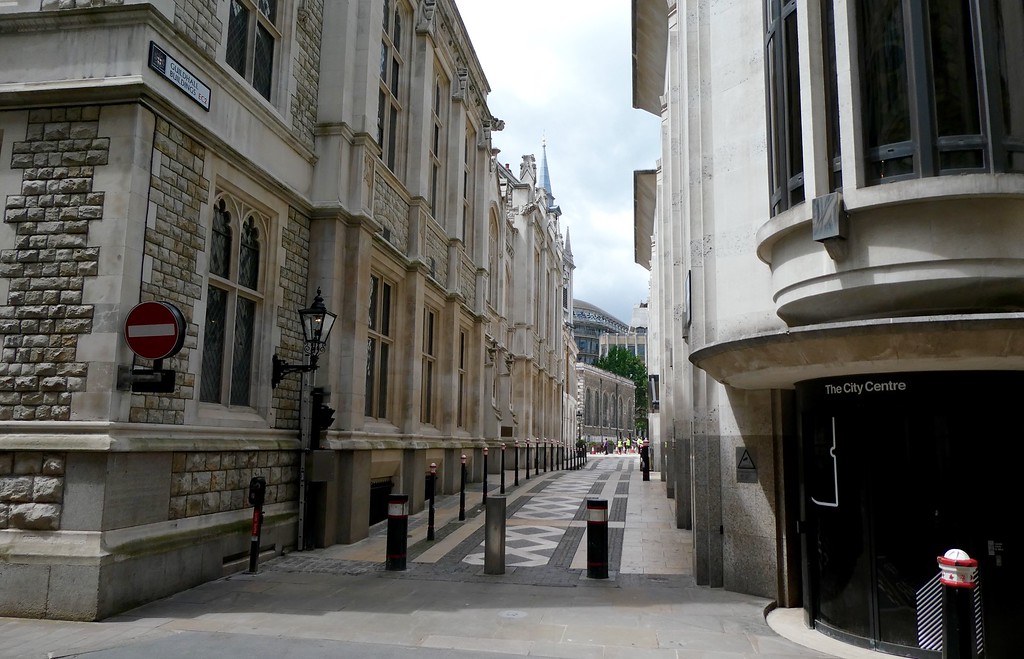 The World Cup was currently running so we used “a pint of beer” as an excuse to stop in a pub and watch the game a bit, also giving (my) feet a break. We made this decision while walking through Leadenhall Market, a charmingly restored covered market area near the Bank district. While the site’s claim to holding market events goes back as far as the Roman times, the current building was constructed after the previous structure was demolished in 1881. I love the use of wrought iron and glass in such structures.

Our vacations are rarely relaxing. When we’re not actively traveling to/from some place, then we’re probably walking around it. This trip to London would not be any different. We left Leadenhall and headed west, going to Hyde Park to see if we could catch sight of the Household Calvary exercising in the paddock across the street from the stables. 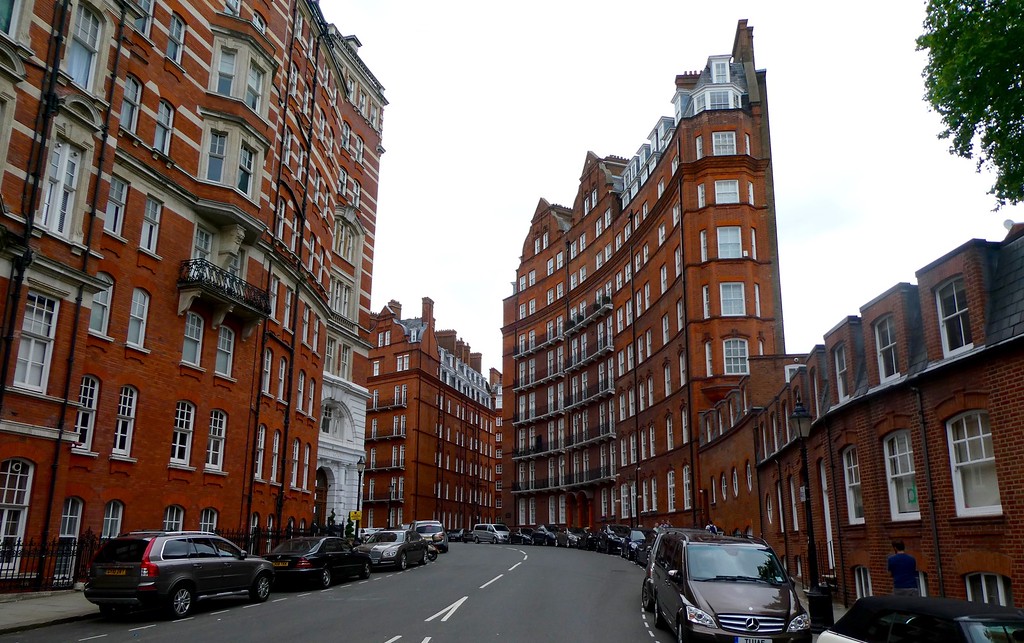 By the time we got to Hyde Park I was at the end of my walking limits. We took another break, this time on a park bench overlooking the lake. We watched the geese and ducks move about from the water to the grass, dodging the inattentive people as they walked by. The chestnut trees were in full bloom, something I found interesting to note considering Basel’s trees had finished blooming weeks ago. When we eventually left the bench, we walked back to our hotel and took a welcome break, admiring the view of the city while doing so.

I wanted a steak dinner. I know, I know: big surprise. A quick search of the internet showed that there was one near where we had seen Young Frankenstein the night before. This time when we left the hotel, we went directly to the Underground to get there.

The Tube, as it is informally called, is incredibly easy to navigate and use. And noisy! I had a hard time adjusting to the squeals and squeaks of the cars as they wobbled down the old rails. I am spoiled by the Swiss transit system. Honestly, if I had to commute or otherwise use the Underground on a regular basis, I would wear some noise-cancelling ear buds.

We found the Flatiron Steakhouse, noting the small gathering of people standing around the door. As we approached I heard a man talking to the host, asking about the wait time. I thought I heard “an hour and a half” Whaaaaat? We stood there long enough to learn the drill: either hang around with one of those little restaurant buzzing pagers, or leave your phone number and the restaurant would call when a table opened up, at which point you had ten minutes before they moved on to the next person in line. Dan and I kept walking, following the man who had just left his number with the host. I overheard him report back to his friend, stating they’d keep walking around and if they found something before the phone rang, they just wouldn’t come back. That’s when Dan said “Let’s wait.” I was surprised but had no problems waiting for a good steak. What did surprise me is that he wanted to wait at the bar. We went back to the host, confirmed the wait time (yes, still an hour and a half) and requested a pager. The host seemed a little surprised at that, as he explained to us that we could walk around the neighborhood while we waited, but no, we took a seat at the informal little bar near the front of the establishment.

We had barely ordered a couple of drinks when one of the staff struck up a conversation with us as she washed up some glasses and kept otherwise occupied behind the bar. We discussed the Pearl Jam concert, our time in London, her time as a sound engineer, and generally enjoyed the banter. Not more than fifteen minutes went by and our pager suddenly started to dance on the bar. That wasn’t an hour and a half! But a waiter came by and invited us follow him to an empty table. I thought about it during dinner and figured that the next person in line didn’t show up within the ten minutes. Instead of going down the list, they chose to “reward” the guests who were right there. Sort of like the old saying “A bird in the hand is worth two in the bush”. We were there, why not keep us from leaving before we ate?

Anyway, the menu was simple: two choices of steak, five choices of a side, and two choices of salad. The perfect menu: quality, not quantity. We both ordered the flat iron steak (medium rare, of course) and it wasn’t long before our platters came out. It was good. It was really good. Not eye-watering good like the steak at Lake Bled, but it was definitely worth the fifteen minute wait.

As we paid our bill our server handed us two tiny (think “earring size”) steak knives like the one in the picture above. He explained that we could exchange them for a free ice cream cone at the front of the restaurant. Well, that answered the question of where we’d find dessert tonight! I wandered up to the counter and was studying the large pile of shaved chocolate when our bartender friend came up to scoop up my ice cream. A large scoop of salted caramel covered in chocolate shavings was soon in my hand and a smile was on my face.

After dinner we continued to explore London’s neighborhoods, taking advantage of the long twilight of the summer days.

I love the stacked dormer windows 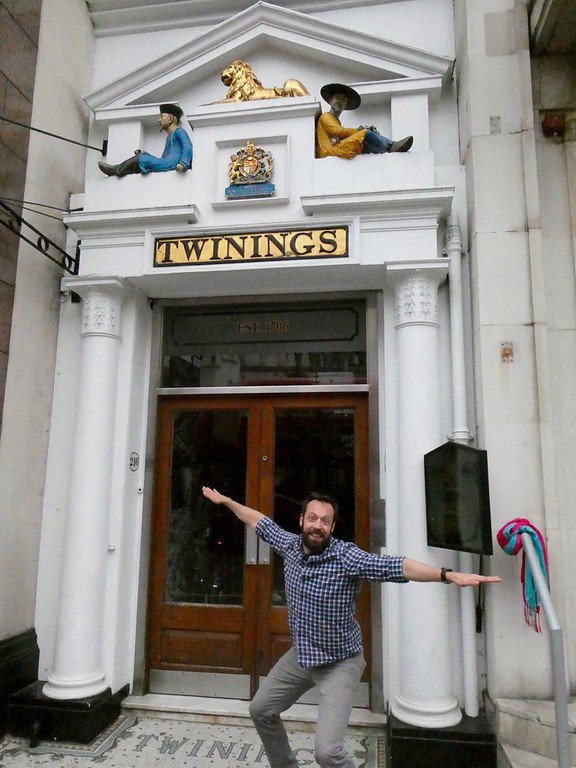 The Royal Courts of Justice

We passed a pub and stopped in; Dan for a pint and me for a Sprite. And conveniently, the World Cup was on over the bar. We took a Father’s Day photo while we watched and when our glasses were empty, we headed back out to the streets of London. Fleet Street, to be precise.

Interesting but not terribly photogenic, we passed out of one neighborhood and into the next, and the next, and eventually found ourselves on the other side of the Thames.

I had been collecting coins throughout the trip so far, mostly because I am unfamiliar with the denominations and I didn’t want to hold up the line while buying something. But tonight on your way back to our hotel we stopped in the local Sainbury’s to pick up some room snacks. I thought I’d be clever and dump all of my coins in the self-checkout machine – it would count whatever I had and I wouldn’t have to sort through them. So coin after coin was inserted, only to find that I was still short. I put a bill in to make up the rest – and the number of coins I was given from that was more than what I had put in! Ah, foiled again. 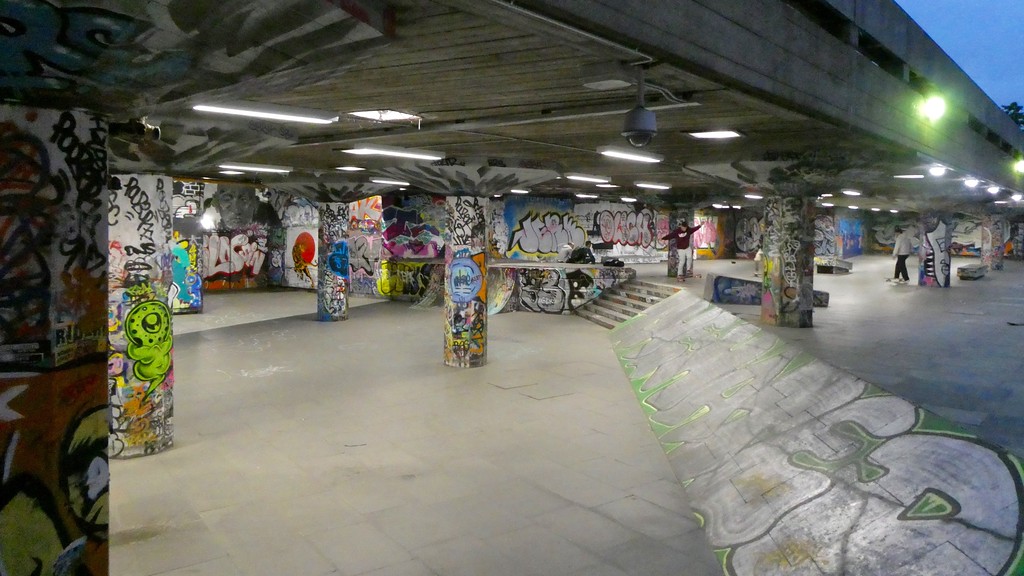