Our stay in Milan was over already. I know that one can never see everything in a city, but my estimate of “a full day on the streets would be sufficient” was correct. We left feeling as though we had a good idea of what Milan – the old city center, at least – was like. It was time to move on to our next destination: Venice.

Breakfast pastry on our walk back to the train station, at Cafe 46 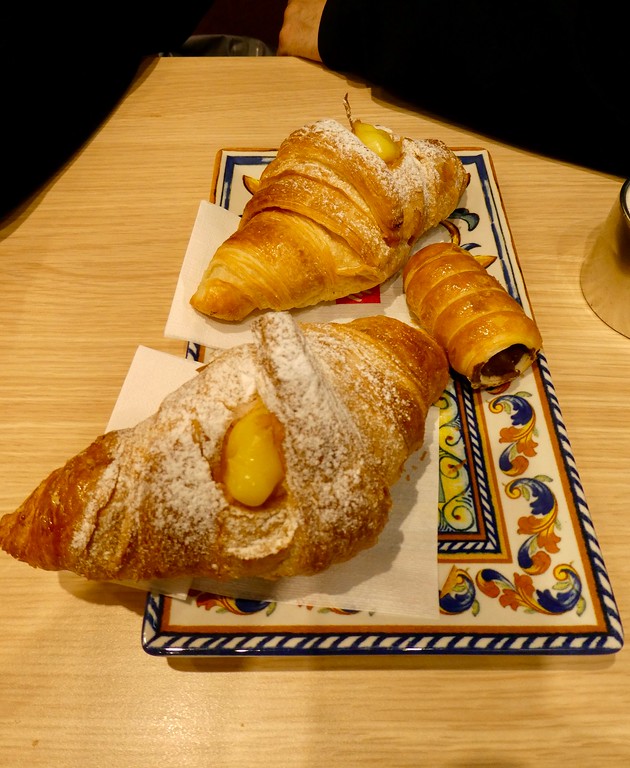 Coffee art on the wall 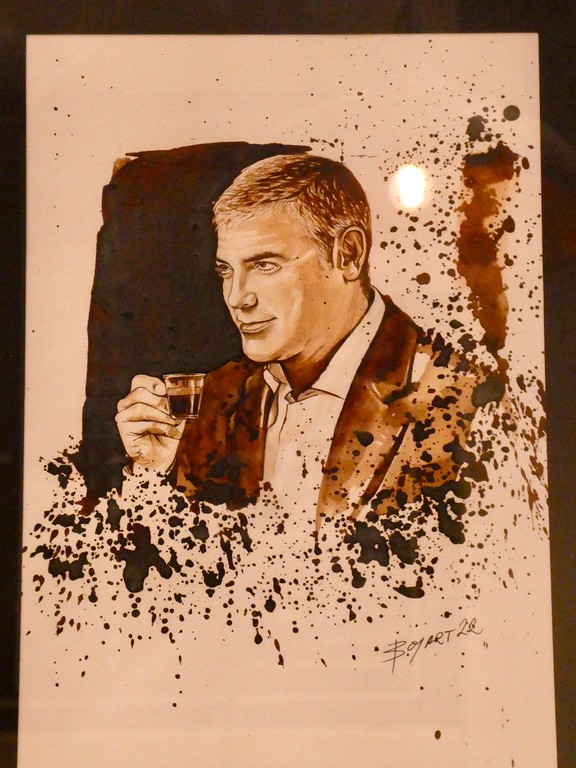 It was raining heavily and our umbrellas were in hand while our backpacks hung on our shoulders. It was a good way to travel. We tried to stay dry, but at least the train ride to Venice wasn’t long (about 2 1/2 hours), so even if we were damp, it wouldn’t be for long. 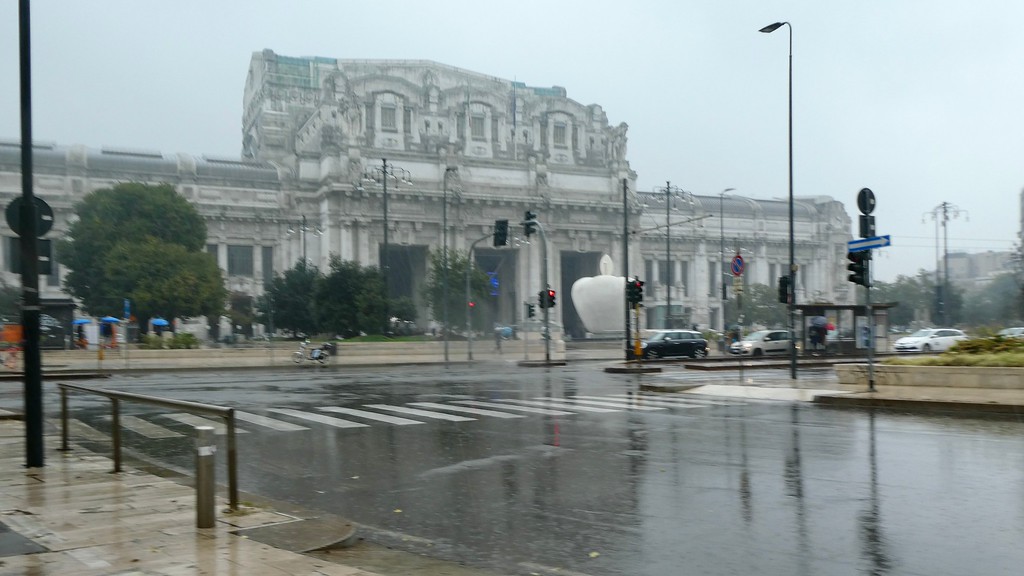 When we had arrived at the station on the way from Switzerland we didn’t take the time to really look around. Dan had been here before, but to me everything was new. Now that we had some time to kill I could stop and smell the roses. Or at least take some photos. 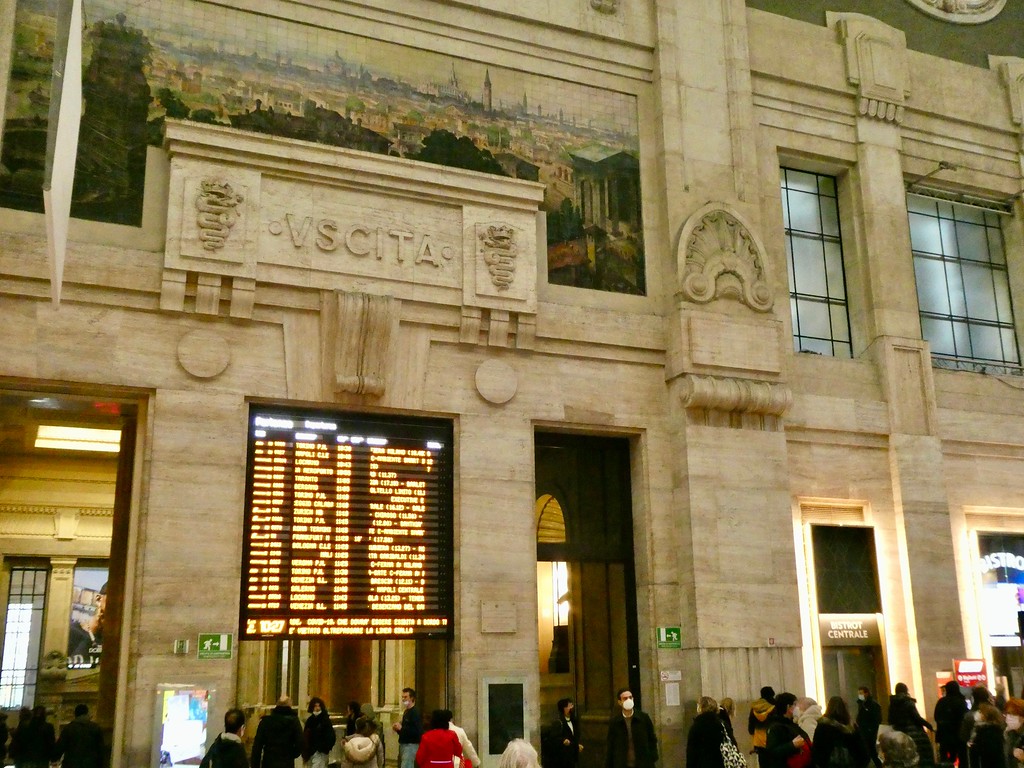 We were early, but we figured that it would be better to wait inside the dry station than continue to wander around the city with our bags. It was pleasant to sit sit out the way and people watch. And I also grabbed a burger from the nearby Burger King, since we’d be traveling until after two o’clock and I didn’t want to get hungry on the train. 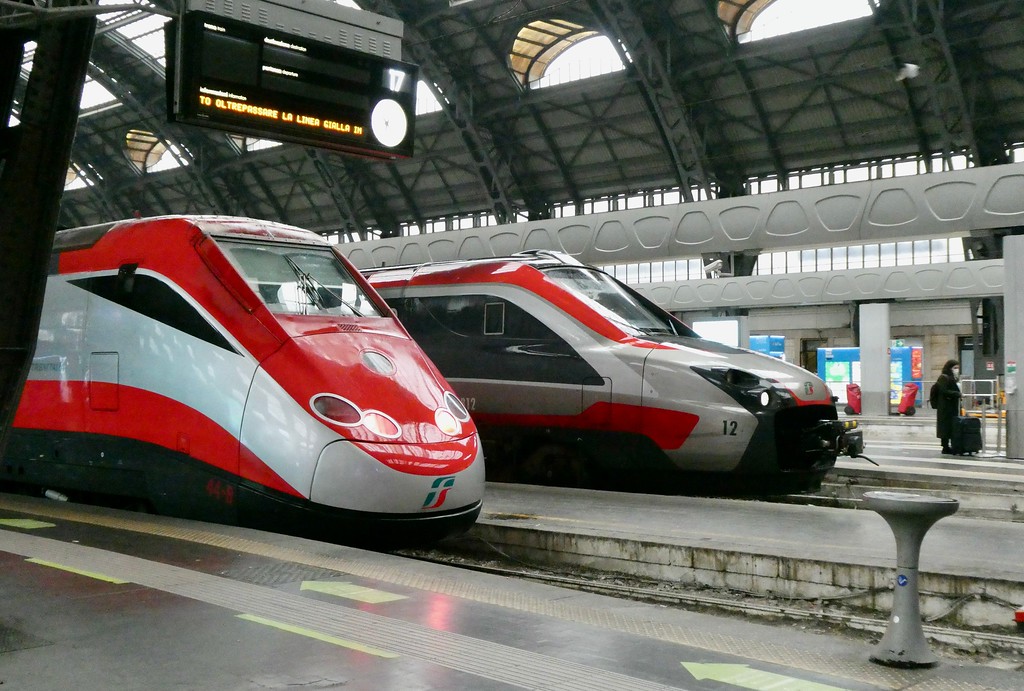 I had been looking forward to the trip from Milan to Venice and seeing the countryside along the way. I knew very little of region of Italy and this would be the perfect sightseeing ride. Except with the heavy clouds and rain, there wasn’t much to see.

The ride across the countryside was uneventful and with a pleasant surprise of food service! Then again, we were in “Prima” class, so maybe I just haven’t lived before now. We accepted a small snack and beverage before settling back into our comfy seats. The train car was quiet, the ride was smooth and it was a nice journey.

There were five stops along the way before we crossed Ponte della Libertà, the road bridge that spans the Venetian Lagoon between the mainland and the island of Venice. Under cloudy skies, our train rolled to a stop at the Venice Santa Lucia station. With bags once again on our shoulders, we exited the station and – bam! – there was Venice in all of its watery glory right in front of us.

It was now just a light rain and we quickly made our way to our hotel, the Hotel Ai Due Fanali. There weren’t a lot of other people, but the narrow streets and alleyways made it difficult to get by – especially with umbrellas fighting for the space above our heads. 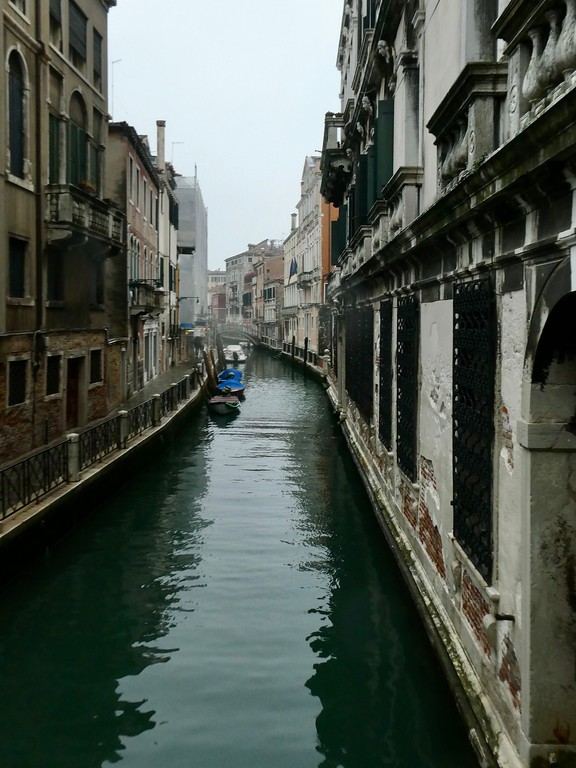 We arrived at our hotel to find a note on the front door: “Please check in at Ca ‘Nigra Lagoon Resort across the Piazza”. Ok. It turns out that the Lagoon resort is the 4-star big brother of our little 3-star Ai Due Fanali. The way I understood it is that it was not currently efficient to staff both front desk locations, so they consolidated this work to the bigger (and admittedly probably nicer) building.

It’s a trap! Not really – we had to check in across the piazza from our hotel building 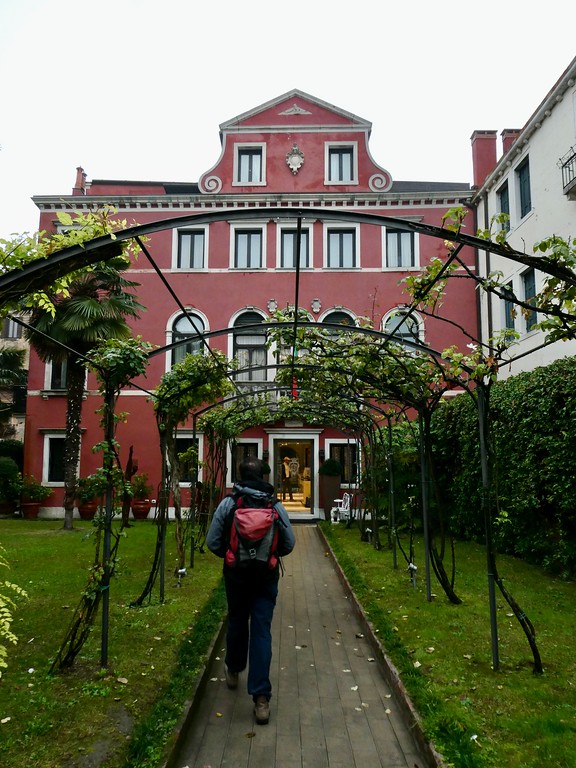 A cozy room for the next four nights

Check out that headboard!

View from our room – that’s the Grand Canal

Our hotel location was ideal: we were close to the station so we didn’t have to haul our bags around; we weren’t directly on a main tourist path, so the annoying sound of rolling suitcases wasn’t that noticeable; because we were close to the train station, the main stop for the water taxis was always convenient; and there weren’t a lot of tourists shops in the area so it was generally quiet. I ever came back to Venice, I’d stay here again.

With our bags unpacked and after a short break, we got ready to head back out into the streets of Venice, this time taking a chance by leaving our umbrellas to dry in the bathtub. We probably should have brought the umbrellas.

We left our hotel and picked a direction. Of course with the streets of the city a maze of tiny lanes and alleys going every which way, that “direction” changed frequently. And with the heavy clouds in the sky, there was no reference via the sun and shadows. We got lost – a lot. But hey, that’s what we’re good at!

Fountains could be found frequently throughout the city – and yes, the water is safe to drink 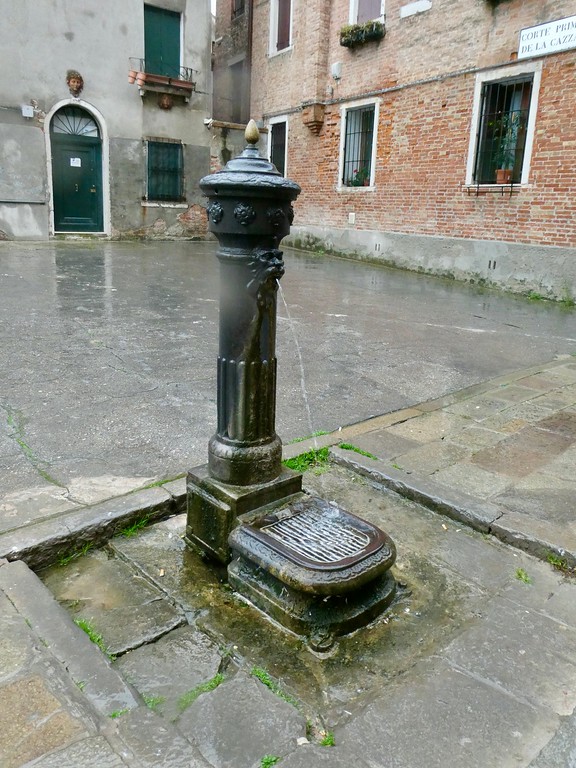 Advantage of traveling in November, in the rain: no people!

Ok, I admit: there were people around

In the photo above, you can see one of the many porters that can be hired to help transport your luggage to / from your hotel. While I personally try to never travel with more than I can handle myself, I can see where this could be useful in certain circumstances. Those poor porters though! Every bridge over every canal has many steps to navigate – not an easy task, no matter what kind of cart you have.

After lunch in a restaurant we happened upon (Al Canton dei Artisti – it was a nice place and the food was good) we meandered some more – and found ourselves not at all where we thought we might end up.

We decided to take one of the water taxis and in reading the fare board, also decided to go “all in” and get the three day pass. With the Grand Canal the central transportation “spine” of Venice, and boats that transit not only this water passage, but travel all around the island and to other islands as well, it seemed like the right thing to do – and it was.

Where do you want to go today? 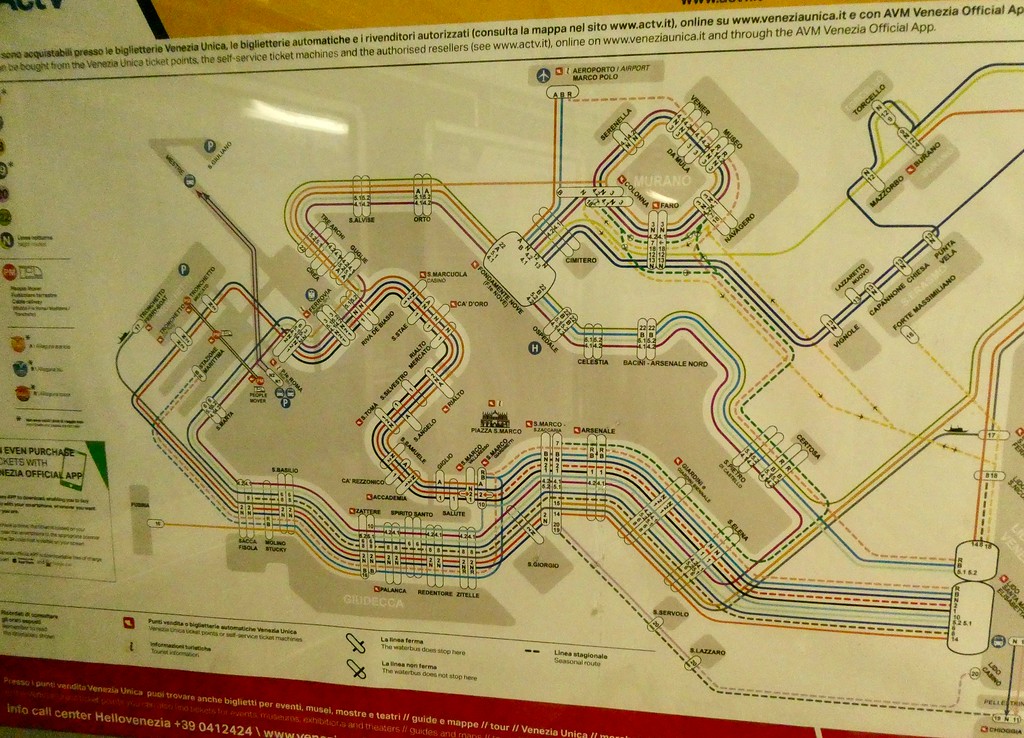 The beauty of the water taxis is that you not only get to go where you want, you get a lovely tour of the city along the way. This was worth the price of admission alone! 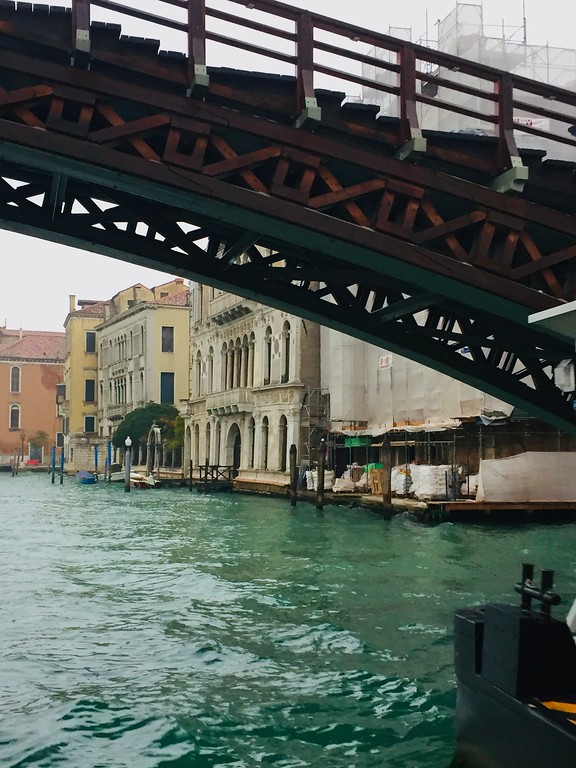 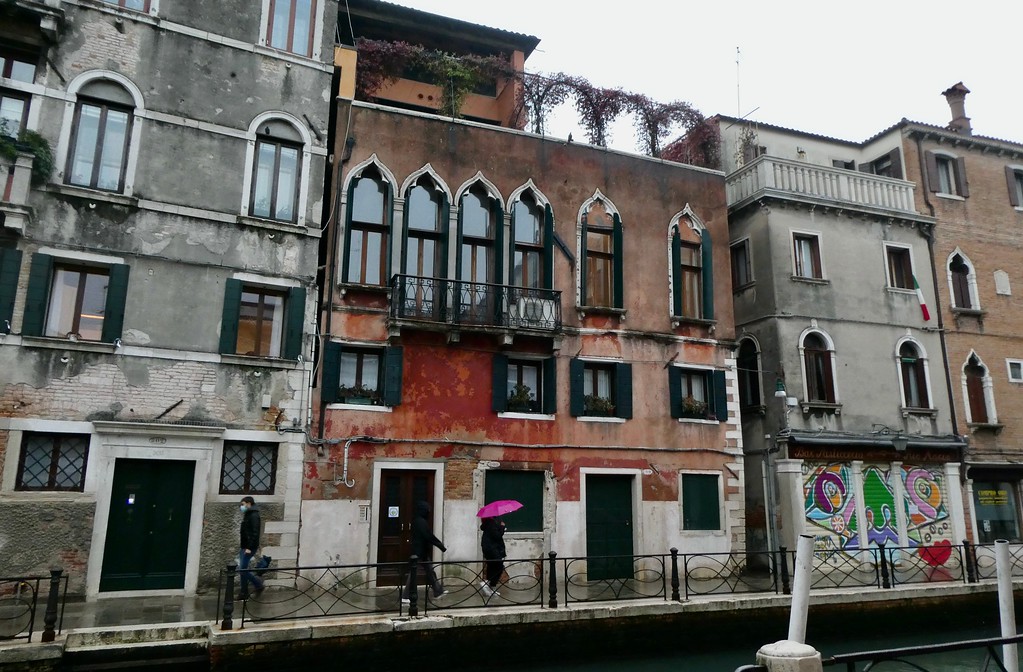 We got off the taxi at some point and continued to meander. Venice is a great city to meander through: every bend in the lane, every canal bridge crossing, around every building was something amazing and new. Dan and I agreed: Venice was better than expected. 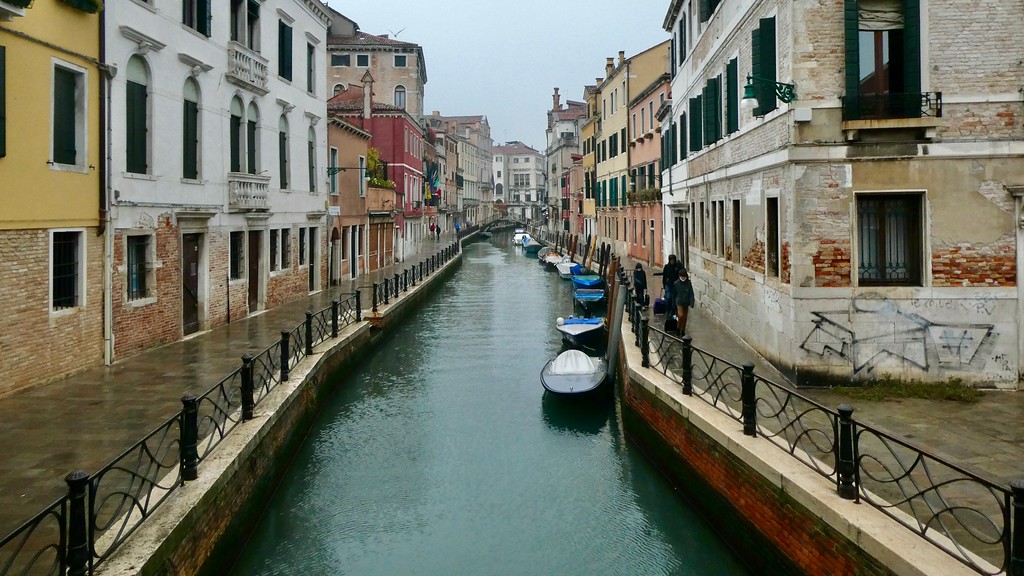 “The city of masks”

There were some amazing display windows with gorgeous masks clamouring for attention. Naturally, I took a photo of one of the most mundane displays in the city.

There were a lot of cat-based items for sale, but I saw very few cats

In addition to the masks, many stores had costumes like these on display – and also for sale. I can’t imagine how many people come in to buy such and outfit, but I would really love the opportunity to wearing a dress like the one above for a day. 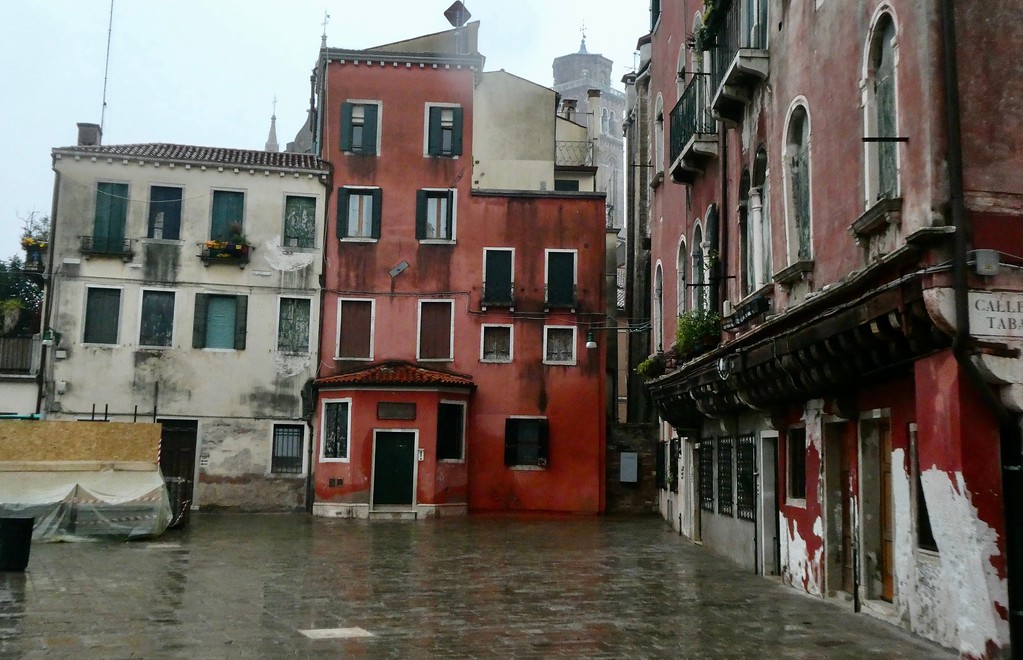 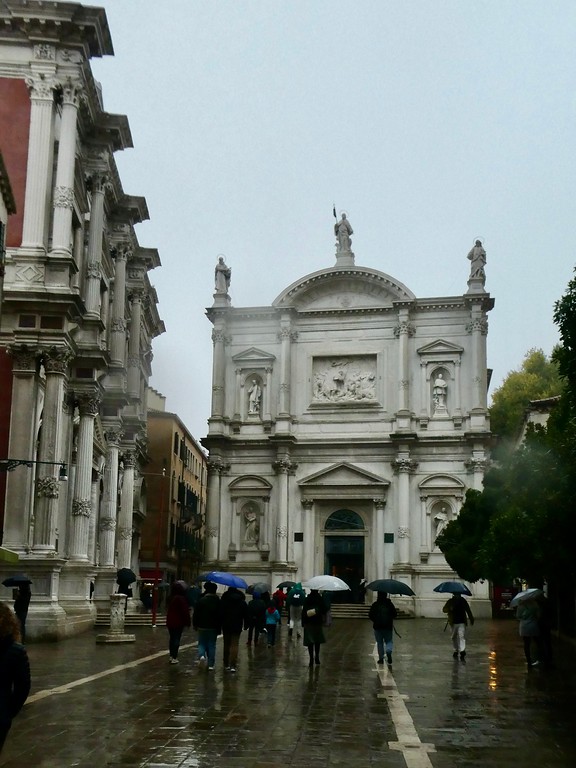 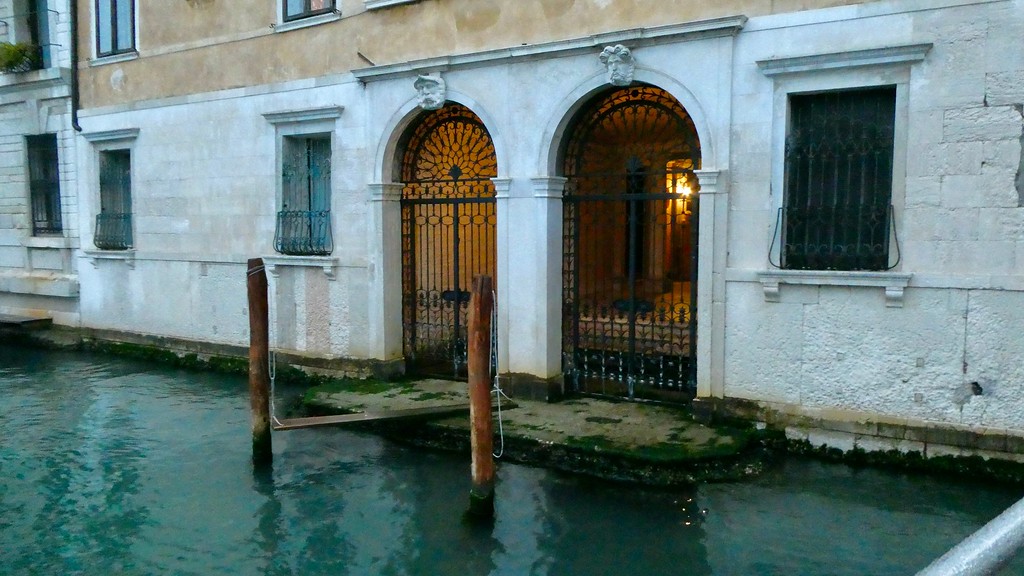 We hopped onto a water taxi to head back to our hotel room. We’d been walking non-stop since our arrival and it was already 6 pm. Time to take another short break before finding something for dinner! 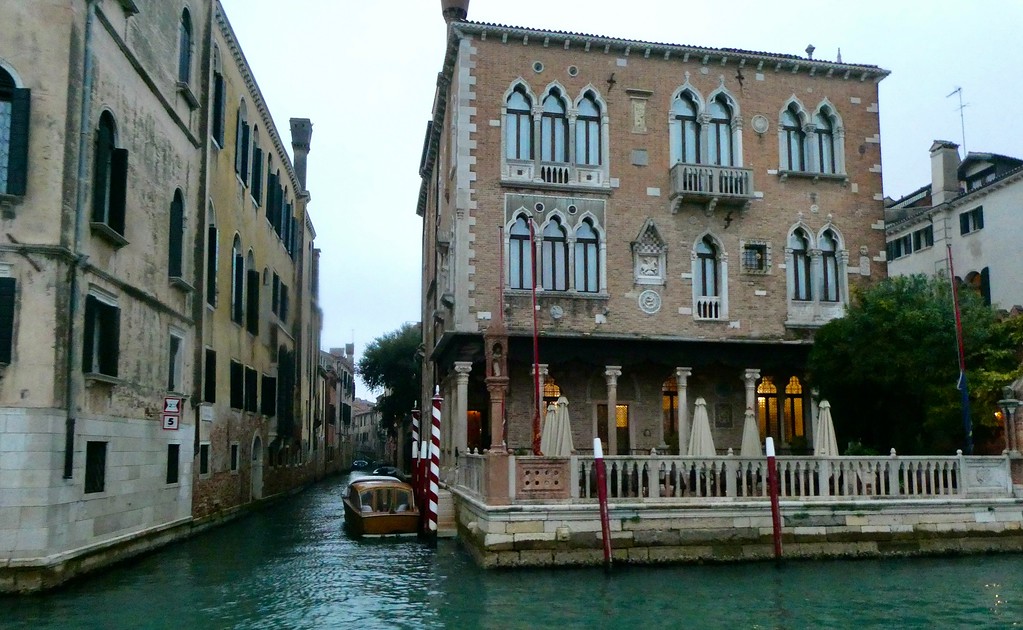 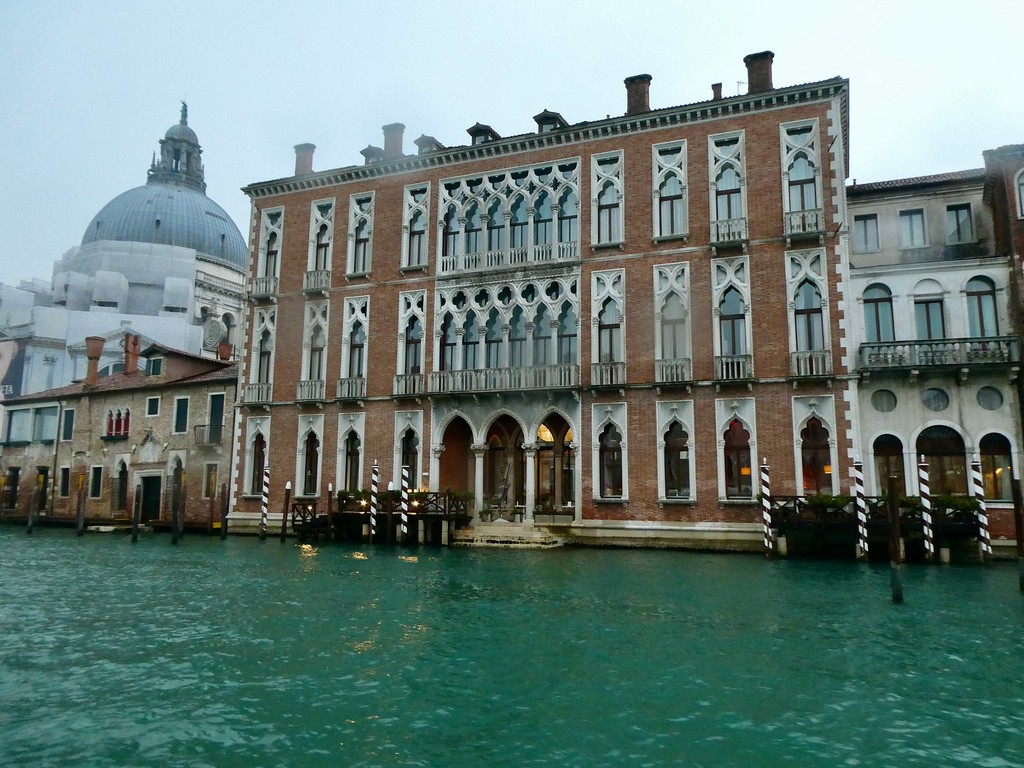 The water taxis are well-organized and the route plan was easy to read. We hopped on one boat, took it for a few stops and then hopped off. The boats are also one of the easier ways across the Grand Canal, if you happened to not be near one of the four bridges that cross the widest canal. We decided to take advantage of the inclement weather and check out the famous St. Mark’s Square, hoping that there wouldn’t be many people around. 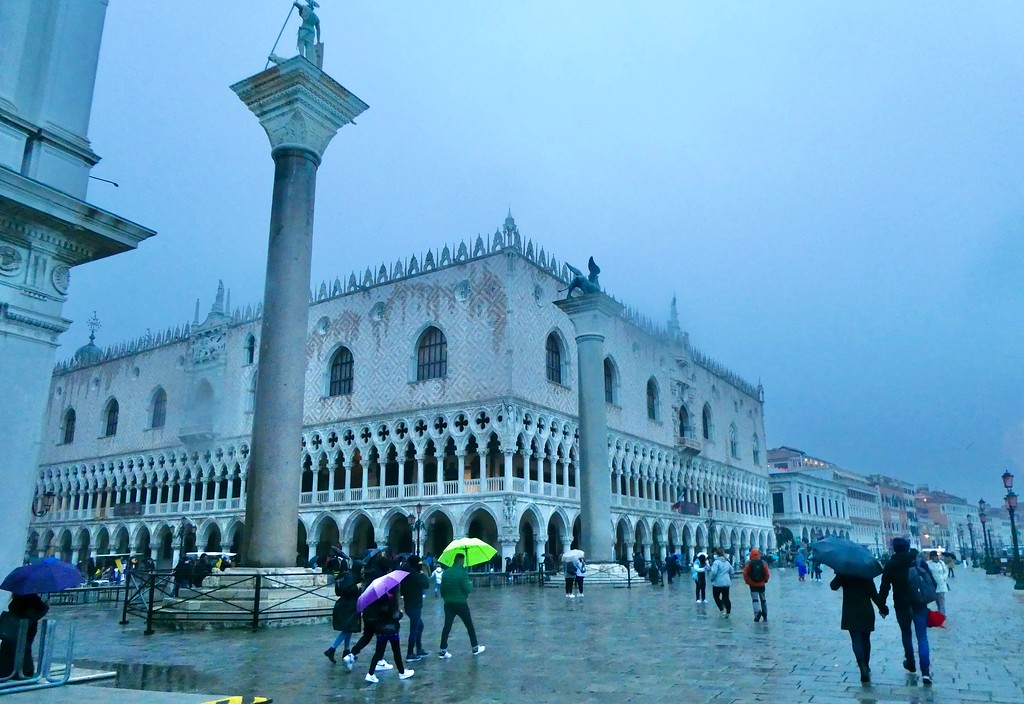 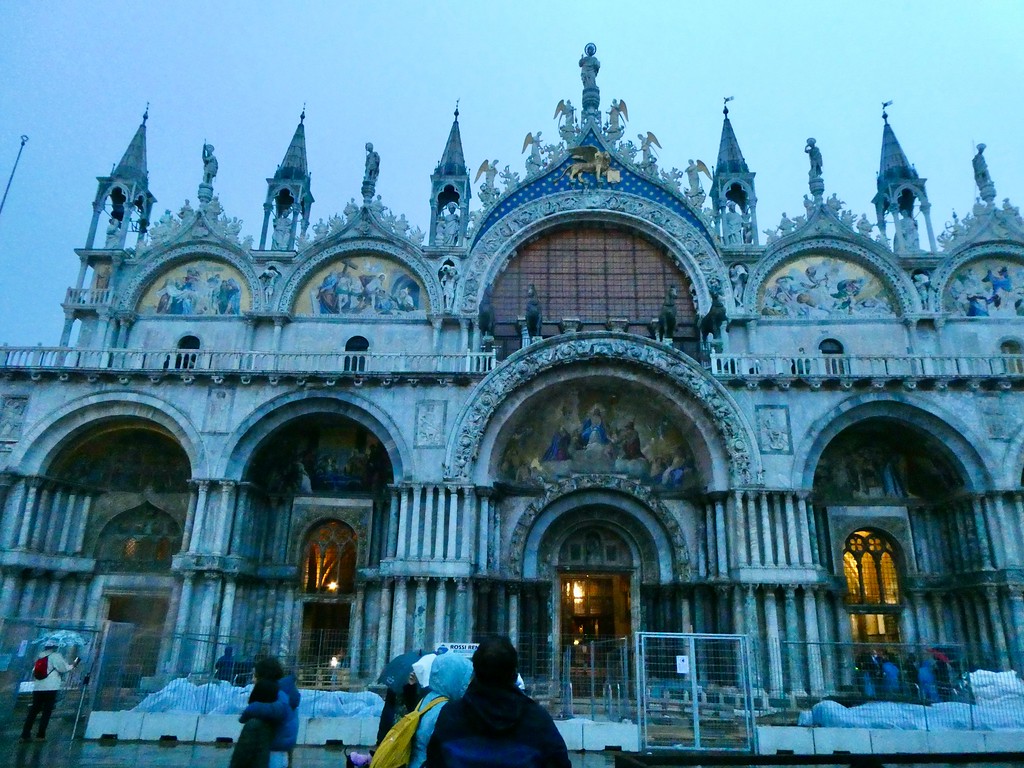 Heavy rain in the square

In the photo above you can see a raised platform. These are for pedestrian navigation when the tides are high. The tides are highest in November, so there was a good chance that we might experience wet feet ourselves. From an Italian site:

“But how high does the high water get? A tide that exceeds 110 centimetres above the mareographic zero of Punta della Salute, a reference level in Venice since 1897, is considered high water. In the last decade, on average, the tide has exceeded 110 centimetres only six times a year; this means that for a few hours 12% of the city is flooded. When an exceptional tide is forecast, that is over 140 centimetres, which rarely occurs, about 59% of the historical centre is flooded, with a level that goes from a few centimetres to about 60 centimetres in St. Mark’s Square, the lowest area of the city.”

Video Link from Nov 5th that shows the crowds on the narrow platforms. Yuck.

The wind and the rain had picked up considerably by now and a hot meal in a warm and dry restaurant sounded ideal. But still… it was so beautiful to walk the shiny streets that we ended up walking most of the way to our destination. 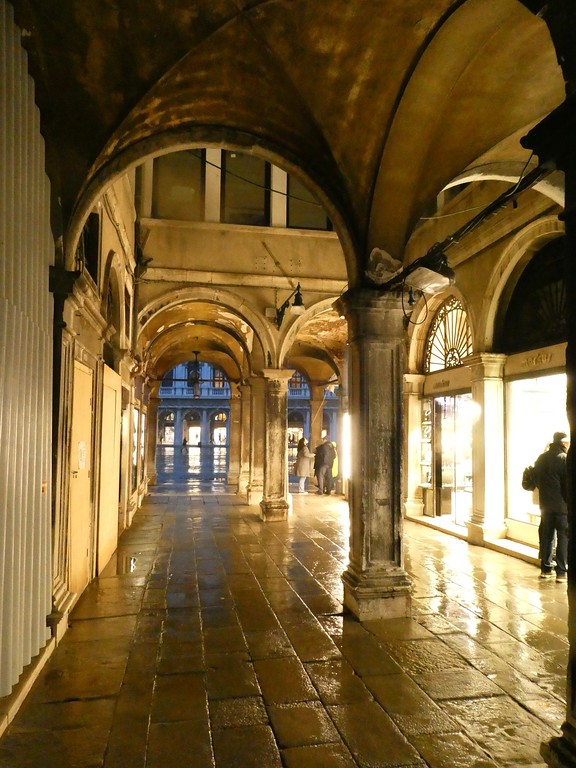 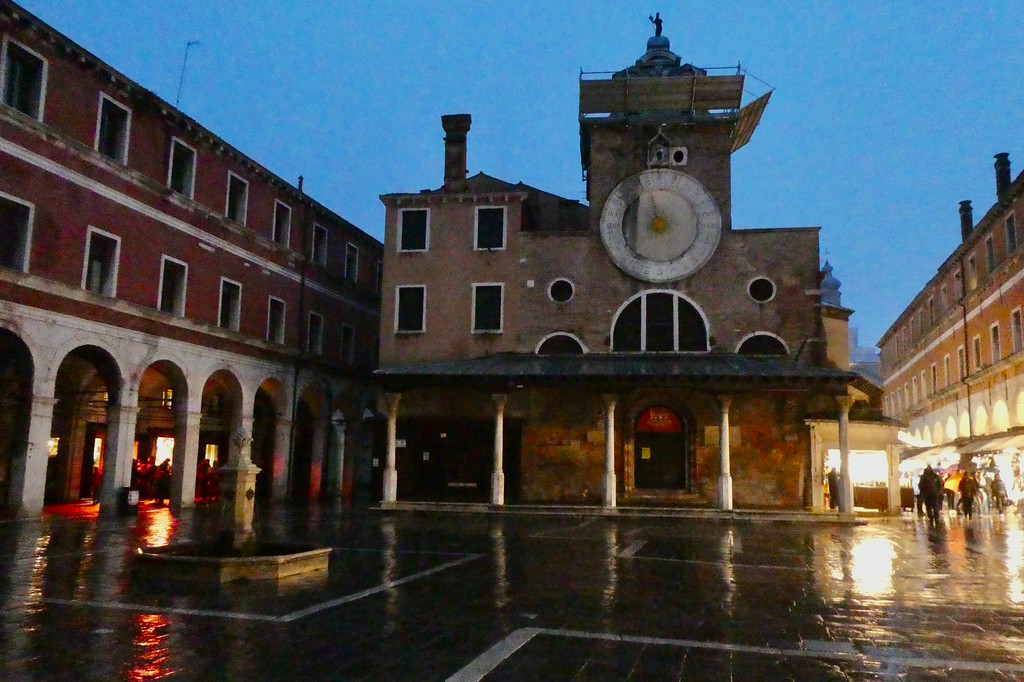 We had plans to go to a particular restaurant near the train station for dinner but when we got there we learned that they were full for the evening. We made reservations for the next night and went off to find somewhere else to eat. It turned out that the restaurant we passed half a dozen times already, “Vittoria dal 1938,” was a great choice. It was a tiny place with an open kitchen, friendly staff, and great food.

After a filling meal we retreated back to our room, draping our soaked clothes from every possible surface. The umbrellas had suffered terribly from the high wind and I feared that I would never be able to use my cute Appenzeller print umbrella again. Regardless, I hung it up to dry next to Dan’s – it might be salvageable!

We spent the evening as we do most evenings on the road: now that we had the “lay of the land” (or water, in this case), we got to researching what there was to see and to learn more about what we had seen. We had a busy evening! The first thing to really understand better was just how Venice was built. I will leave you today with the best video I found on this subject:
How Venice Was Built.