One of the highlights in Innsbruck is the Ambras Castle. It came highly recommended on various websites and I suggested that we go visit it first thing in the morning, to avoid the post-breakfast rush. Brilliantly, we decided to walk to the castle. GoogleMaps said that it would take us about an hour and we looked forward to seeing what was between “here” and “there”.

It turns out, there wasn’t a lot to see.

We followed along a main road, traffic zipping by for most of the route. It wasn’t until we were almost there before we left behind the concrete and noise and slipped into a quiet and lush forest park. 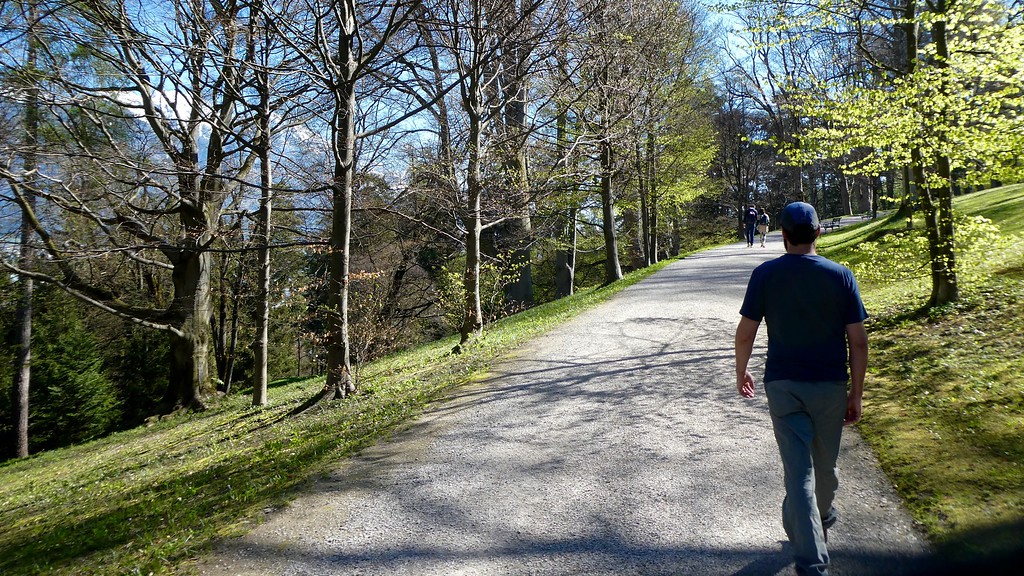 It was a welcome change. We meandered our way up the hill, passing ancient trees and green grass before we finally came to the entrance of Ambras. There were a few people already milling around the gravel paths, and a slight line up to buy tickets. We bought ours, grabbed an audio guide, and headed in to see whatever lay in wait for us behind Door #1.

What I hadn’t realized was that an early resident, Archduke Ferdinand II, was such an avid collector of “things”. Not just military garb and gear, but even more bizarre things, which we’d come to later in the tour. The history of Castle Ambras is lengthy, starting its “modern period” back in the 16th century. Over the years, improvements were made the structures, and the collections were expanded. Through various wars and periods of unrest, some items were moved to safer locations, but today, there is still an incredible array of portraits, armor, and curiosities. 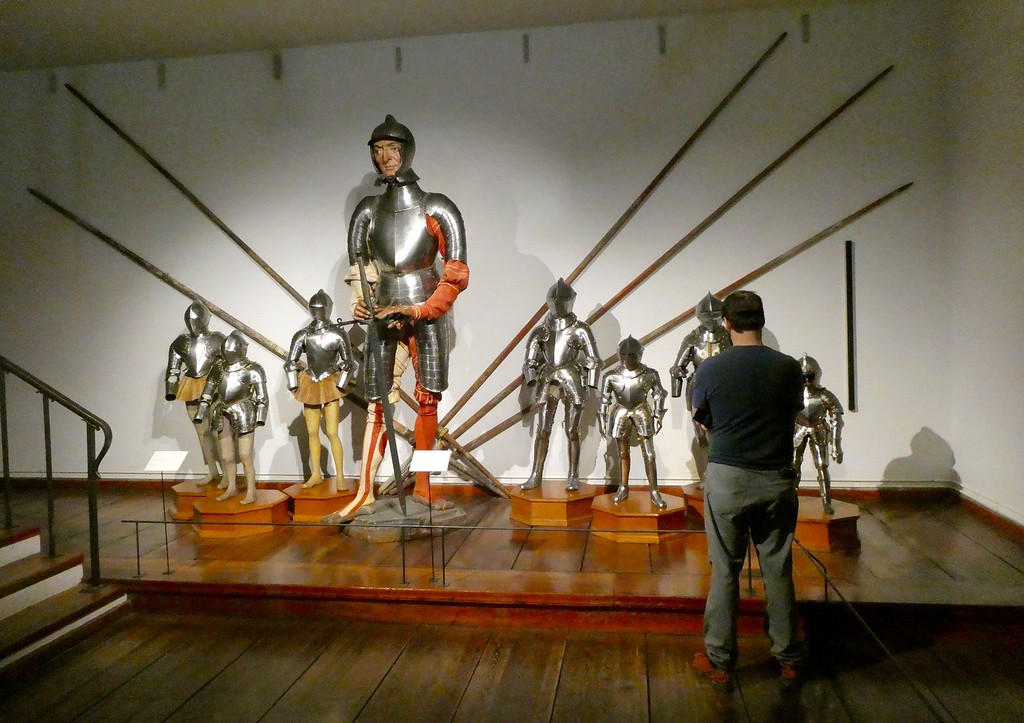 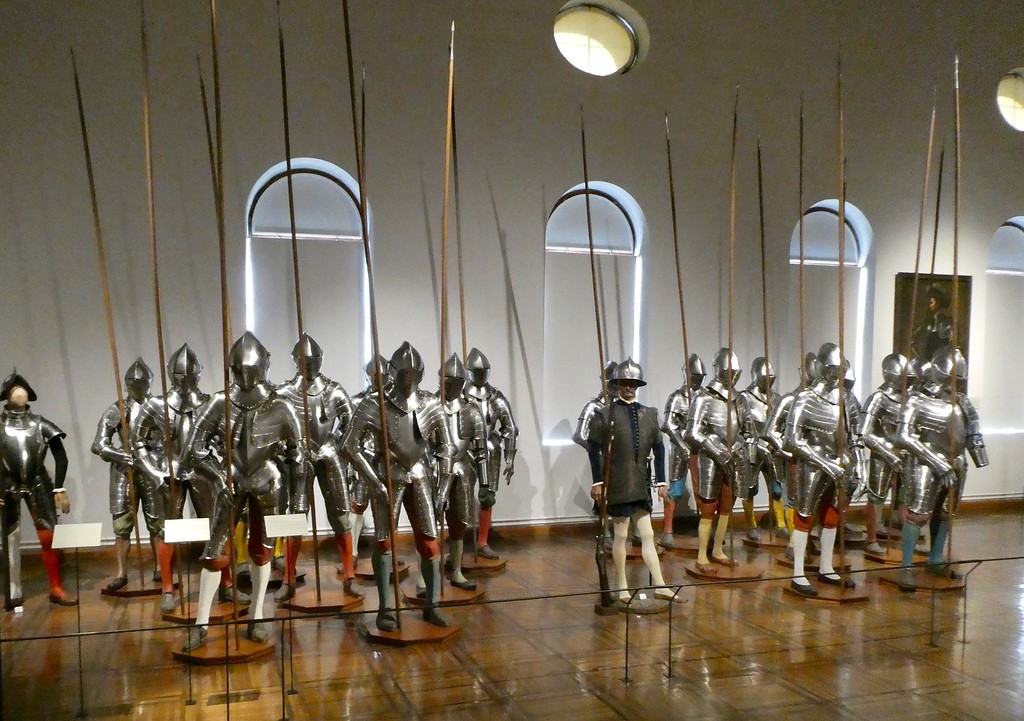 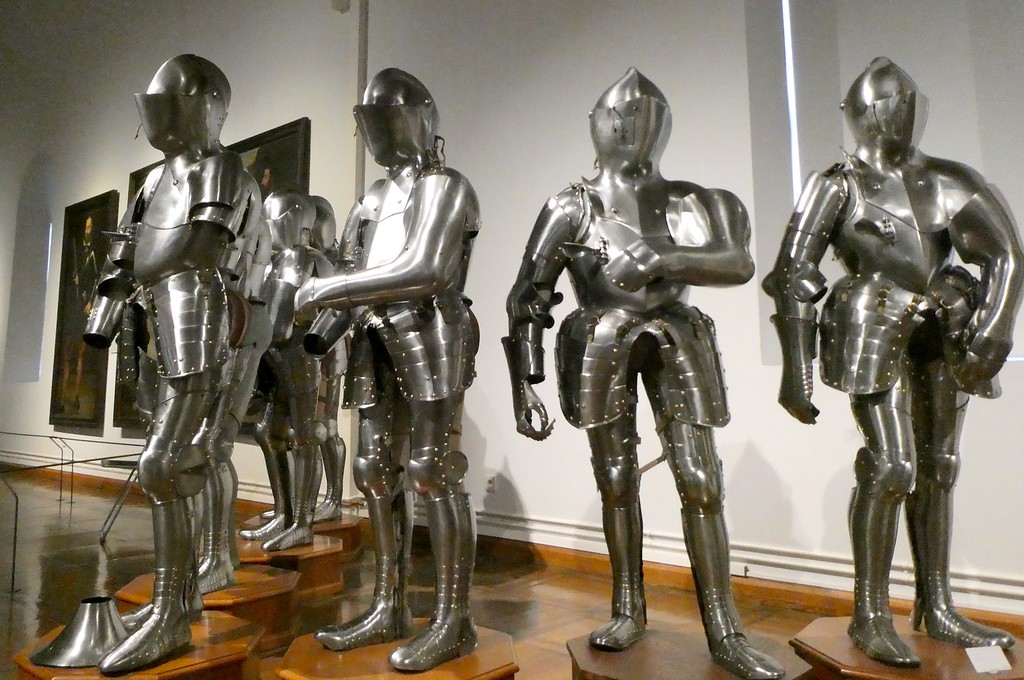 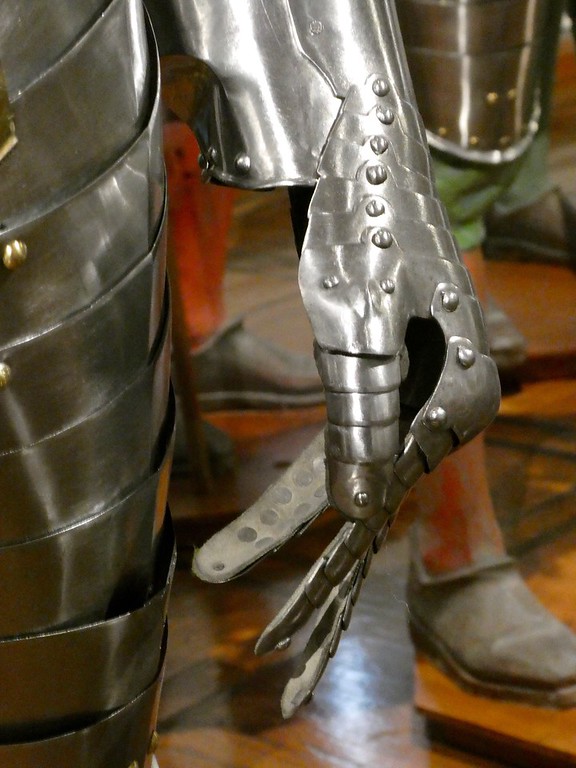 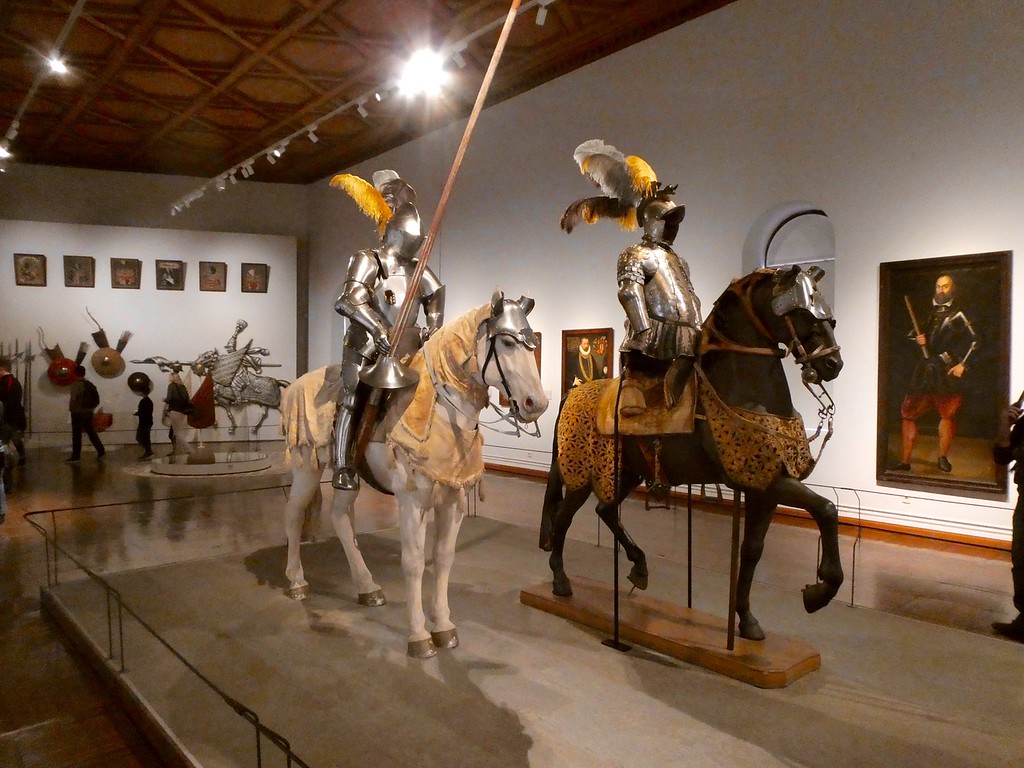 But who is who?

One of the display areas was called the “Chamber of Art and Wonders”. And I can only imagine what someone from that era would think to see such things as mummified sharks, an alligator, as well as “natural wonders (rare, unique and excellent things of nature) in addition to precious objects, scientific items, toys, or luxury items of the time…” (from the Wiki page). I tried to view the objects with the mind of someone who hasn’t been spoiled by the vast knowledge provided by the Internet. I didn’t take many photos because some things can only be appreciated in person.

The key attraction of Castle Ambras is the Spanish Hall.

The craftsmanship that had gone into this room is almost beyond belief. The doors with their intricate inlaid wood, the practically life-size portraits on the walls, even the corresponding windows lined up across from the portraits. The ceiling was its own masterpiece of woodworking skill. 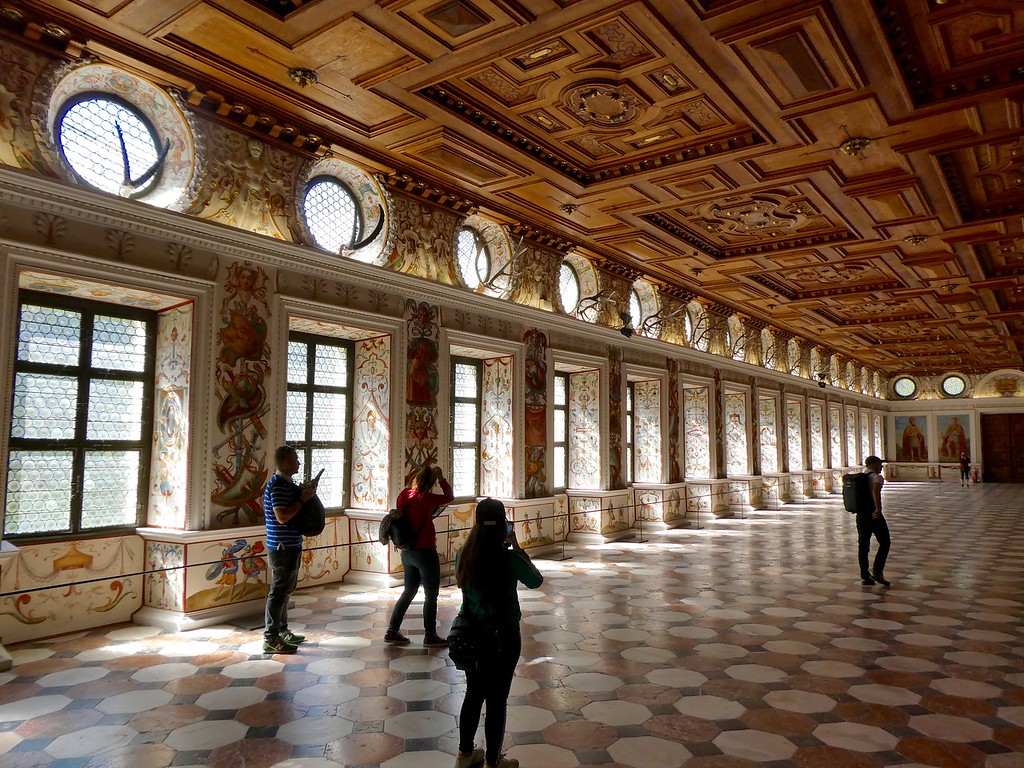 Detail of the glass in the windows 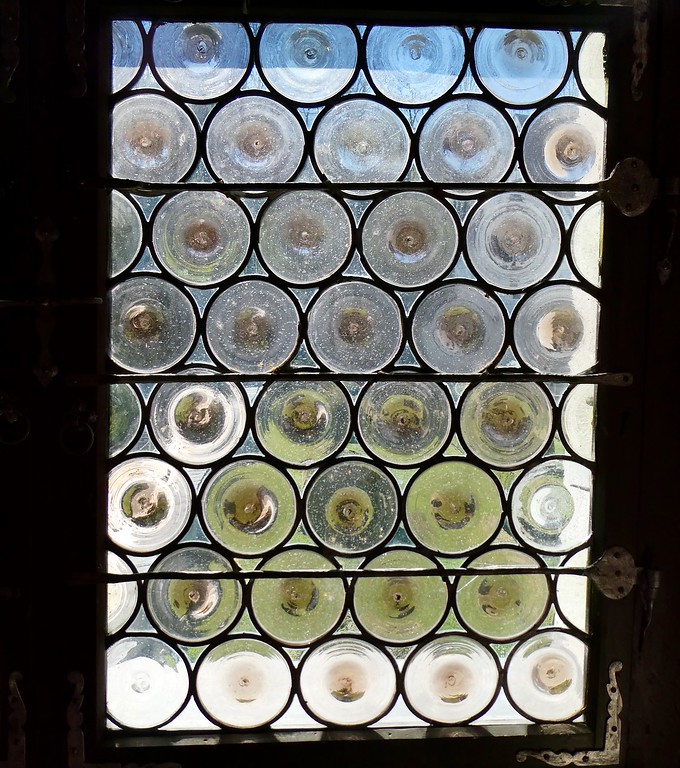 Doors at the far end of the room

Detail of one of the doors

From the Spanish Hall it was a lot of compartmental rooms full of portraits of supposedly important people. Some of them looked normal – but most of them didn’t. 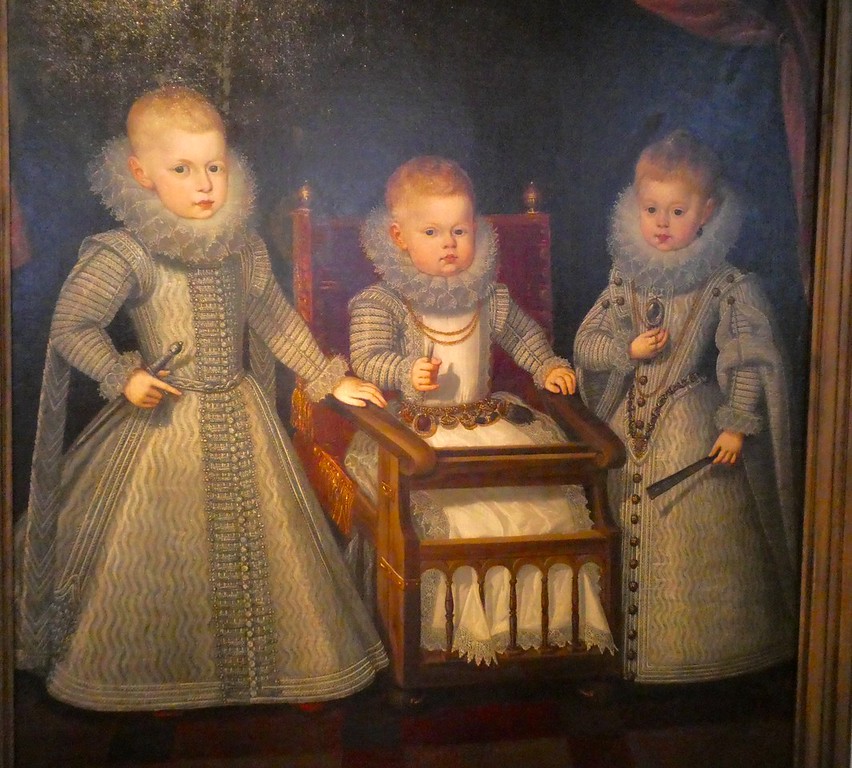 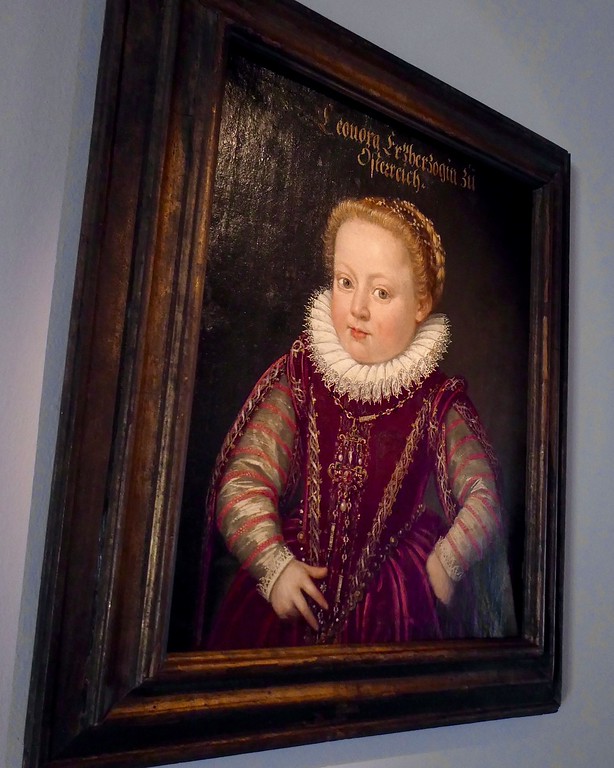 Money box (where Maximilian I kept his coin collection, and no, not his loose change)

Detail of the key holes 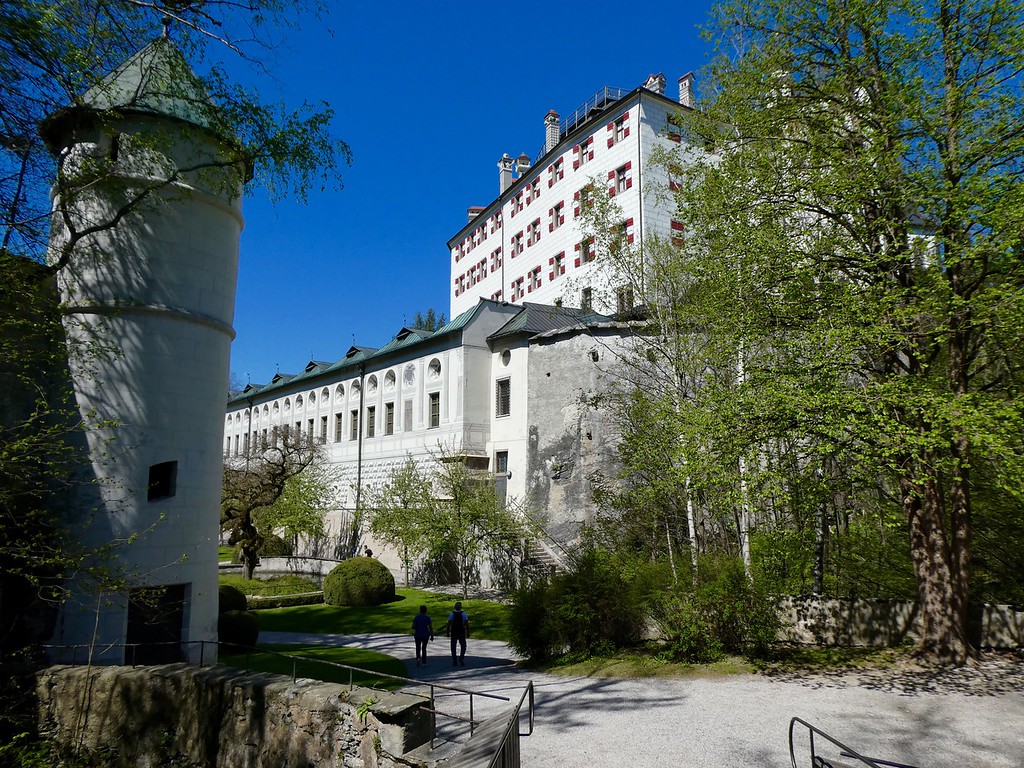 We had seen what could be seen in Ambras Castle and made our departure. We decided that the walk to the castle had been enough, and hopped on a bus for the ride back into the city center. It was a much faster return, that’s for sure!

The afternoon passed and it was dinner time. This time we went to another highly recommended place, but it was a much more casual setting. In fact, it appeared to be a bastion of the local college kids. This boded well for a good meal, as did the small crowded space and the clamor of people placing and calling out orders. Machete Burritos had two items on their menu: burritos and tacos. When there are only two items on the menu, you know that the people in the kitchen are good at what they do.

Welcome to the Burrito Kartell

As the restaurant was packed, we took our burritos back to the hotel and ate them on the deck at the rear of the building. The burritos were fantastic; I found myself wishing that the company would open up a location in Basel. I would be its biggest fan! The evening was peaceful and comfortable, and a good way to end the day. 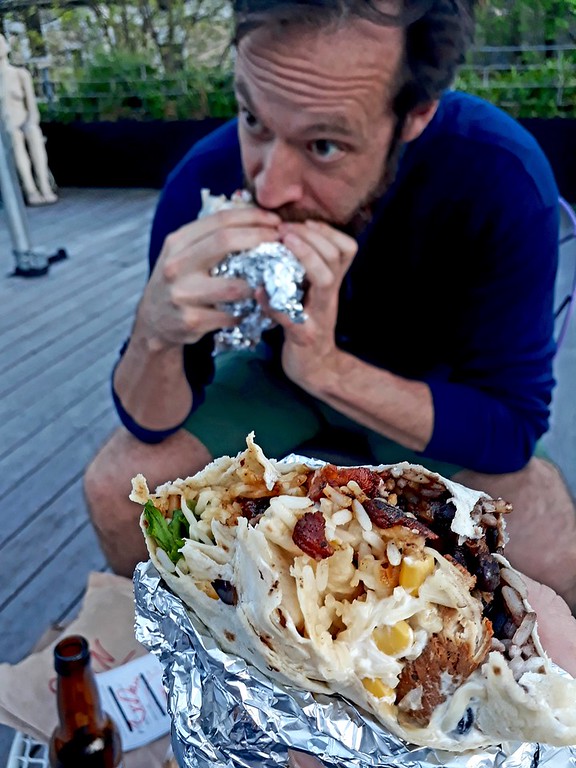