We went to Der Bäcker Ruetz just down the street from our hotel for a nice light breakfast and then proceeded to wander the nearly empty streets of an early Friday morning.

The view across the Inn River 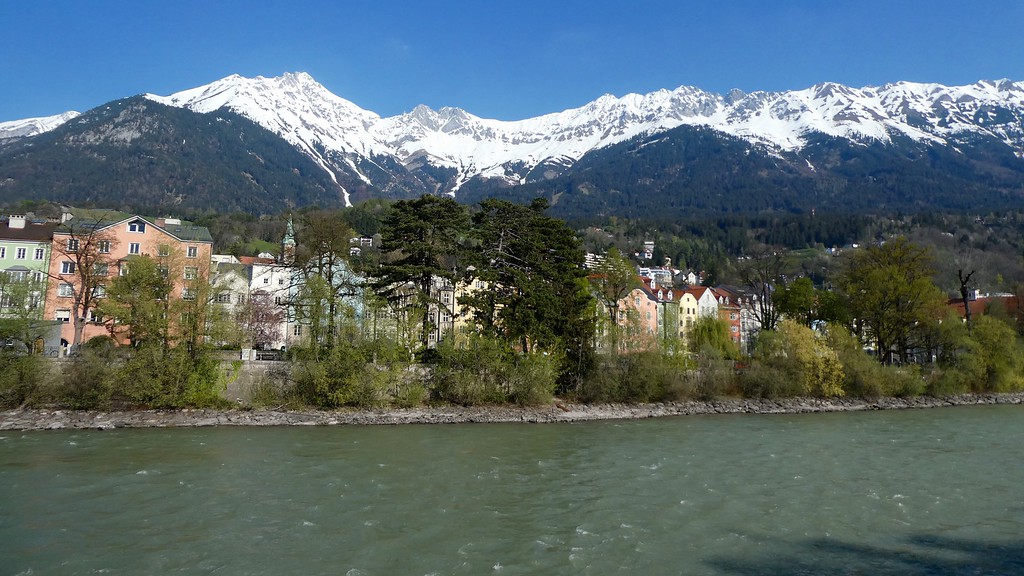 Bicycling is quite popular in Innsbruck

As the weather was good and it was a Friday, I suggested that we take a ride to the top of Nordkette first thing in the morning. I was hoping that we’d beat the afternoon and then weekend crowds – not that I really had any idea of what constituted “crowds” in this town. Innsbruck has very good infrastructure for this trip: directly from the old town, we would be able to reach the summit with ease!

Crossing the Inn on the first mode of transportation: the Hungerburg funicular 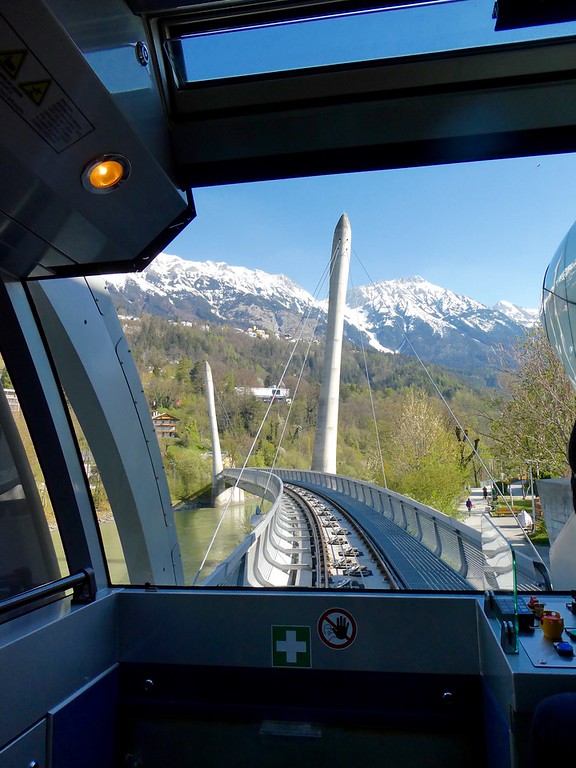 At the little village of Hungerburg we had to change from the funicular to a cable car. There were quite a few people already making the journey, and many of them had tiny little skies in hand. I’ve never seen such tiny skis! I found out later that the are called Firngleiter (commonly called “Figl”), and are common in spring skiing conditions. I guess I don’t spend enough time in the mountains during late spring! 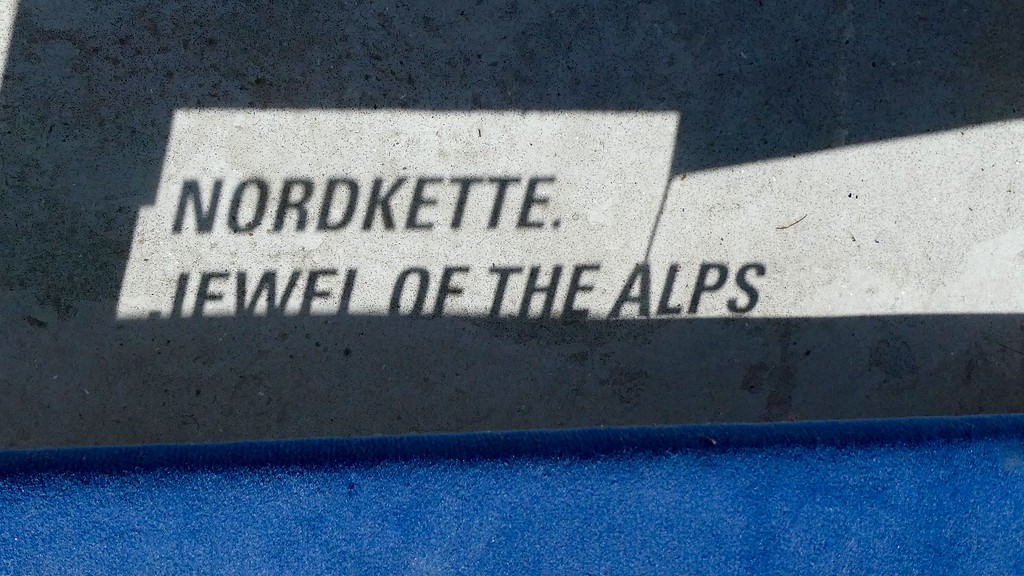 Still plenty of snow for skiing

At Seegrube Station we had to change from one cable to car to another. Most of the people got off at this station, but a few of us changed to the new cable car to finish to journey to the top, called Hafelekar. 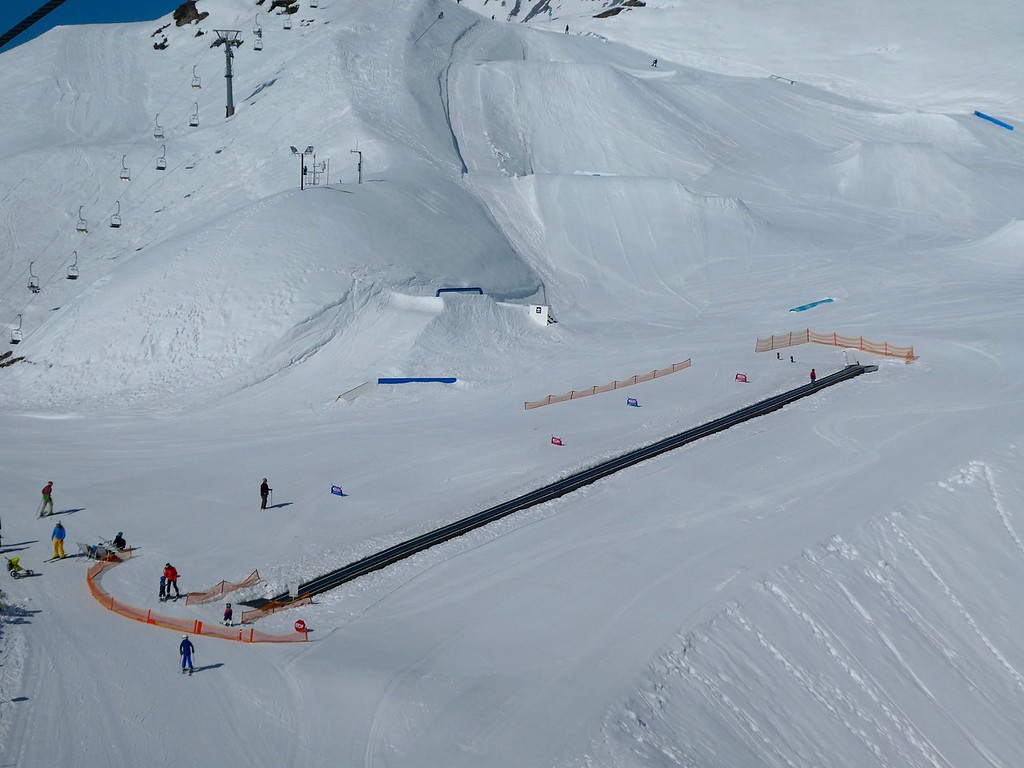 When we exited the cable car at the top and were greeted with an impressive view of the valley, the winding Inn River, and the town of Innsbruck.

Looking across the the Alps to the south

From here we followed the foot path to the actual summit, Hafelekarspitze (2334m). This would have been a lot easier in another month, but today the upper half of the path was still covered in snow and ice and made for treacherous going. But once we reached the top, it was worth it for the 360° view that we had. 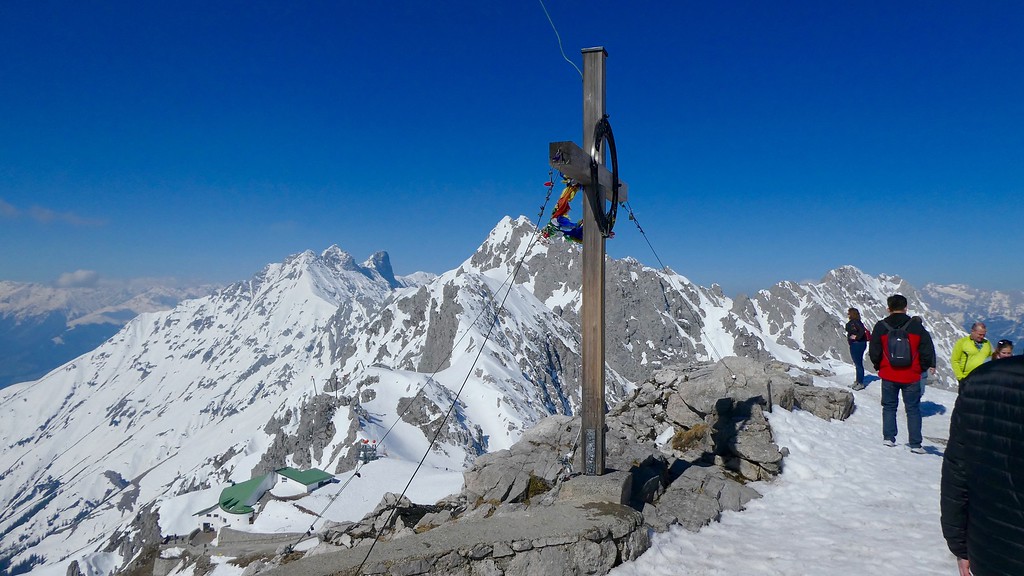 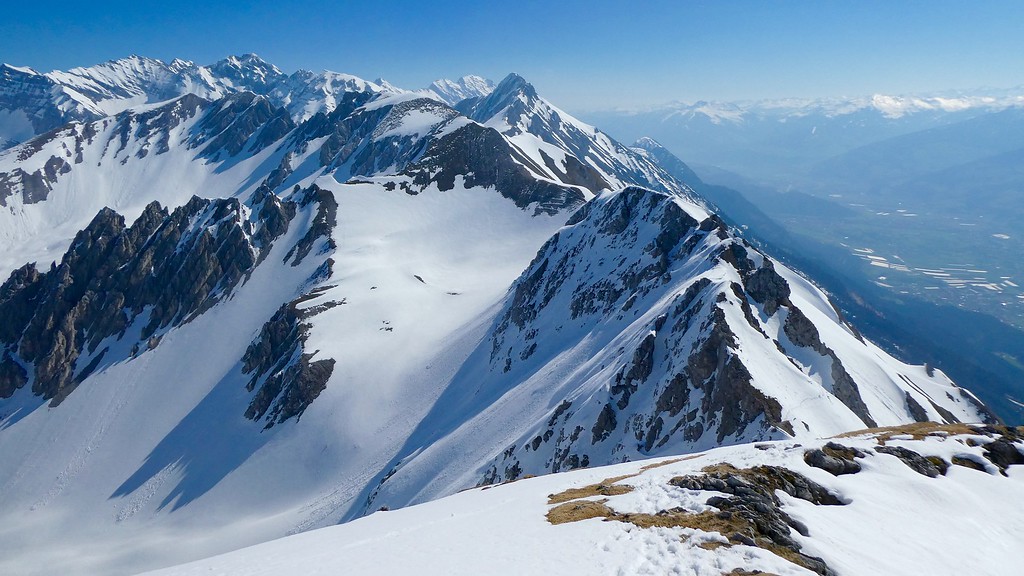 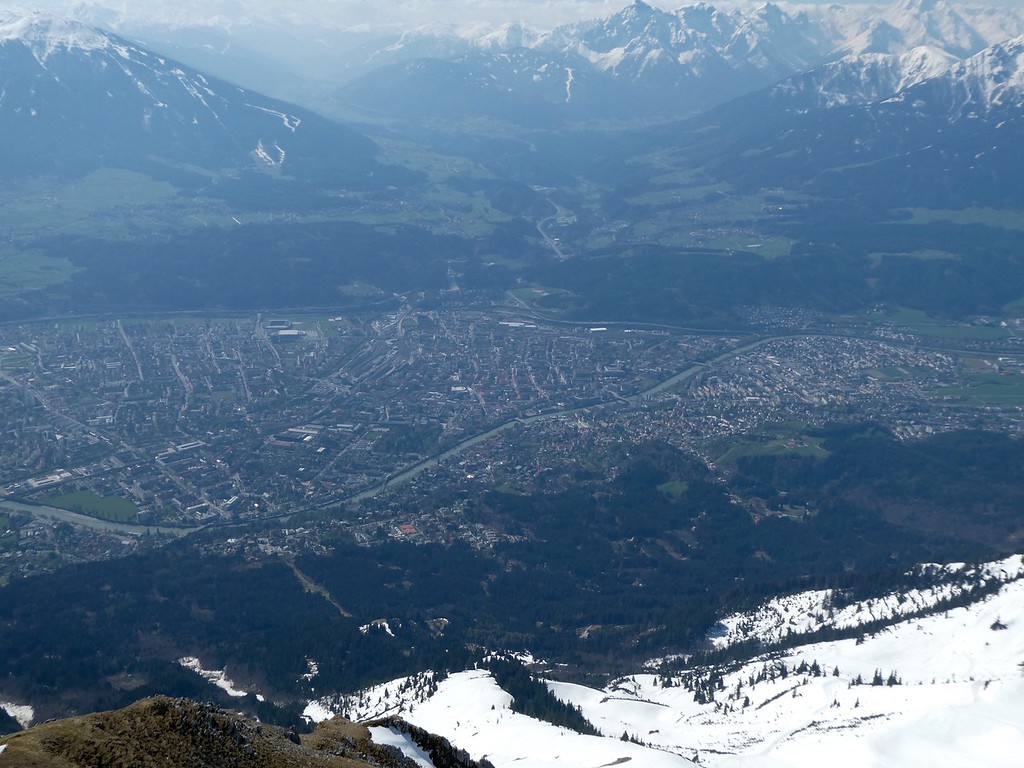 Returning Hafelekar, once I got past the snow and ice 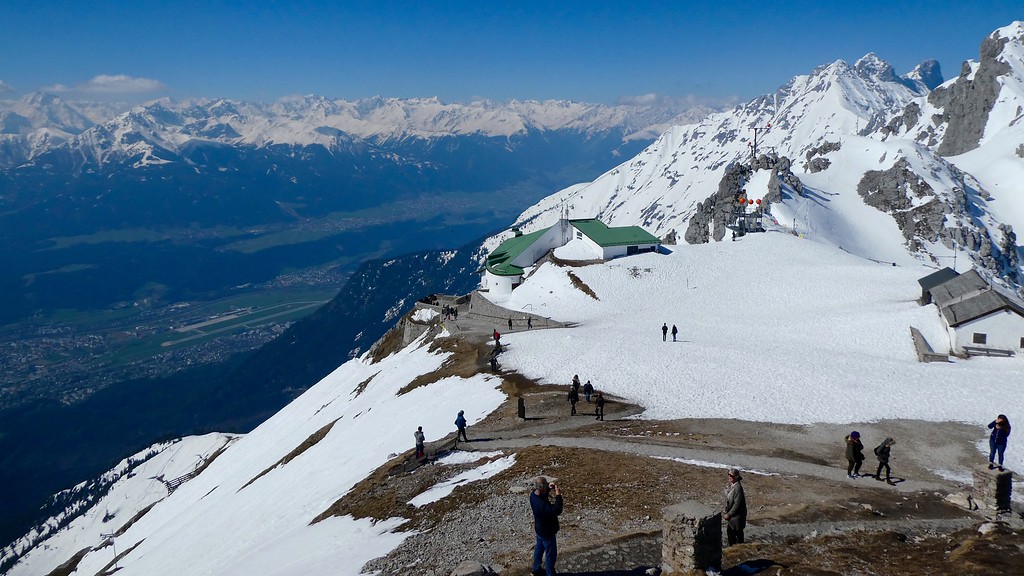 At the cable car change at Seegrube we took a few minutes to wander around and see what this station was all about. Apparently it was all about enjoying the beautiful day with friends! There were so many people sitting outside at the tables and chairs, enjoying a bottle of refreshment and eating snacks and generally enjoying a wonderful day.

Plenty of snow still on the roofs 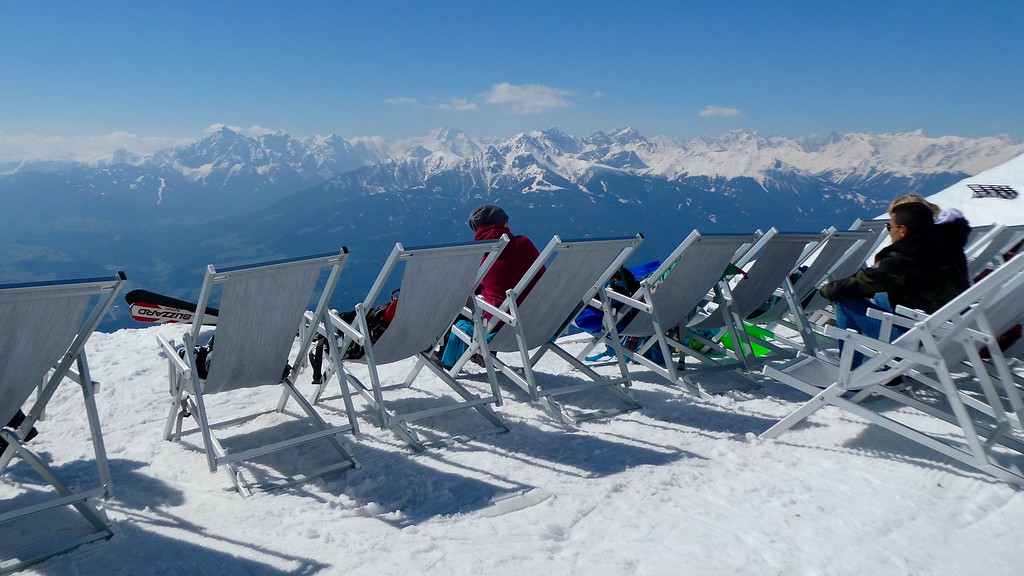 Based on a conversation I overheard, this is a popular thing to do

The return to Hungerburg was uneventful, but now that I had the “lay of the land”, I could focus more on what we were passing over. And it was all hiking and biking trails! There were even a few hardy souls making the trek up the mountain.

They have a ways to go…. 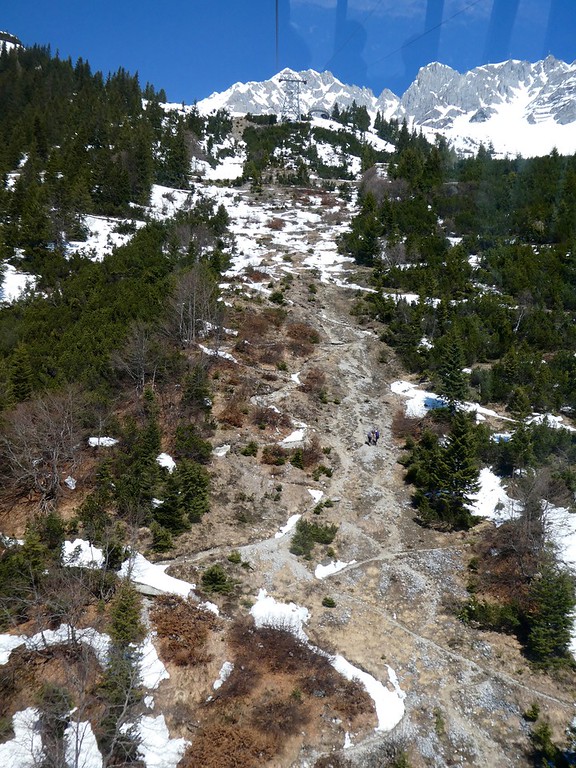 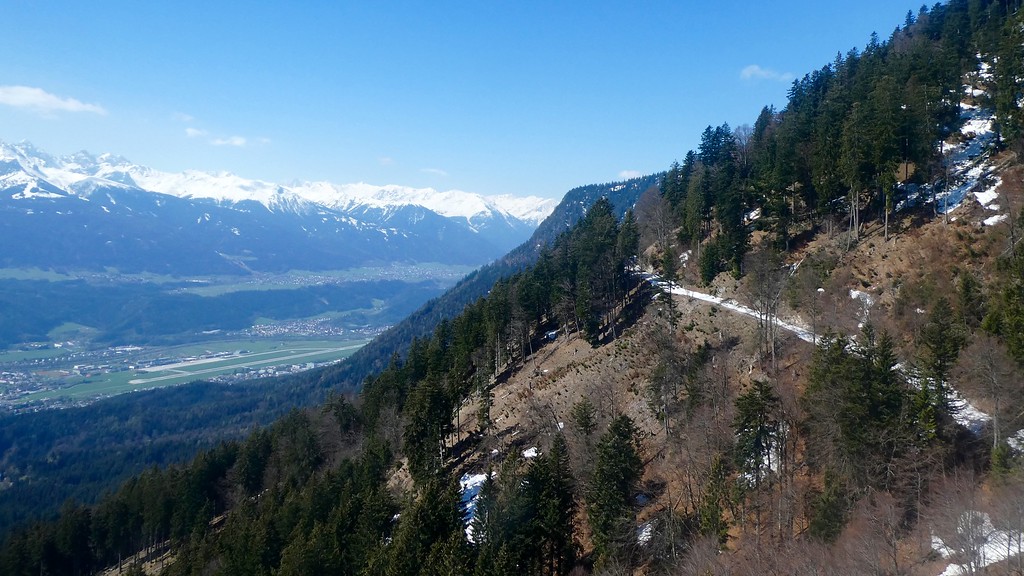 Again, we decided to explore the area between our transportation modes. Hungerburg looked like it might be an interesting place to check out, and off we went to see if we were right! 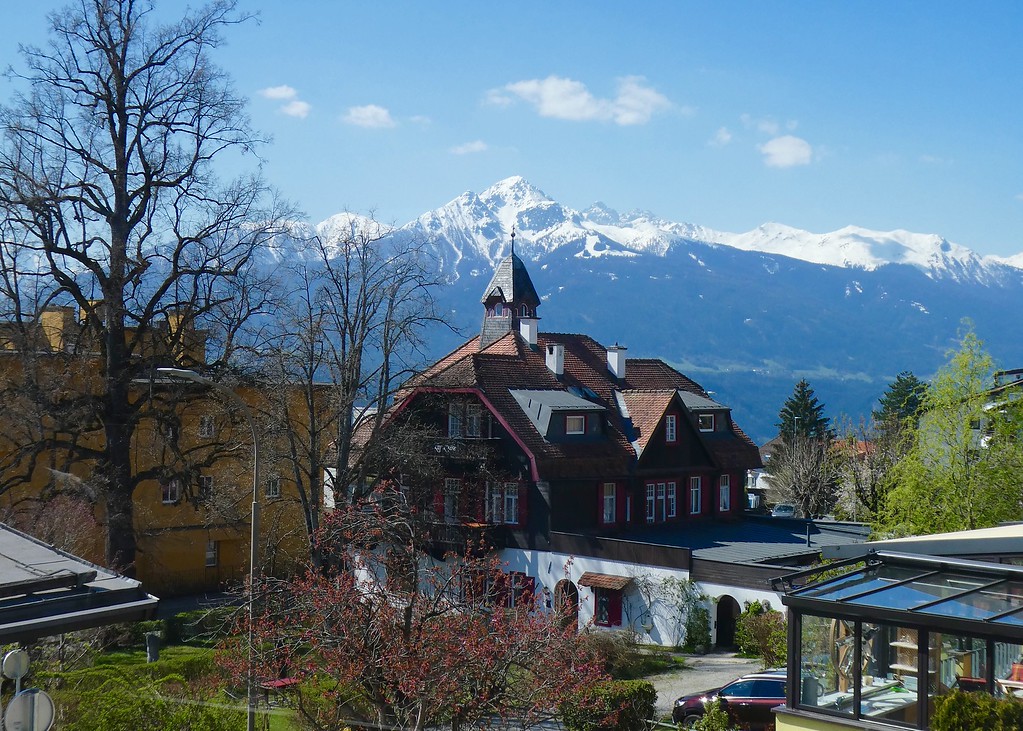 Our explorations didn’t last long. The village wasn’t laid out very well for aimless wandering and instead we ended up heading downhill. We figured that we were close enough to Innsbruck now that we could just walk the rest of the way. What could possibly go wrong? 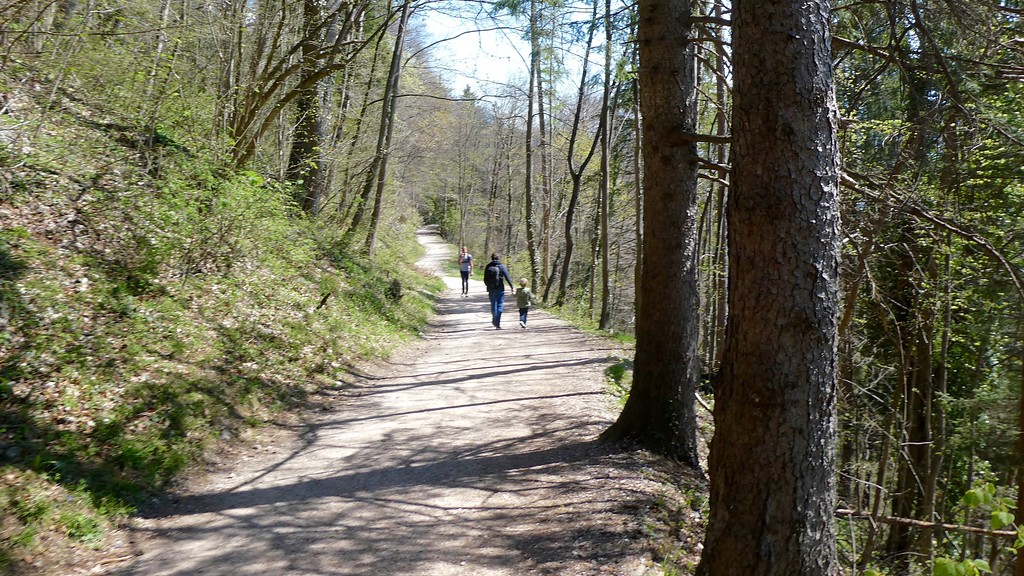 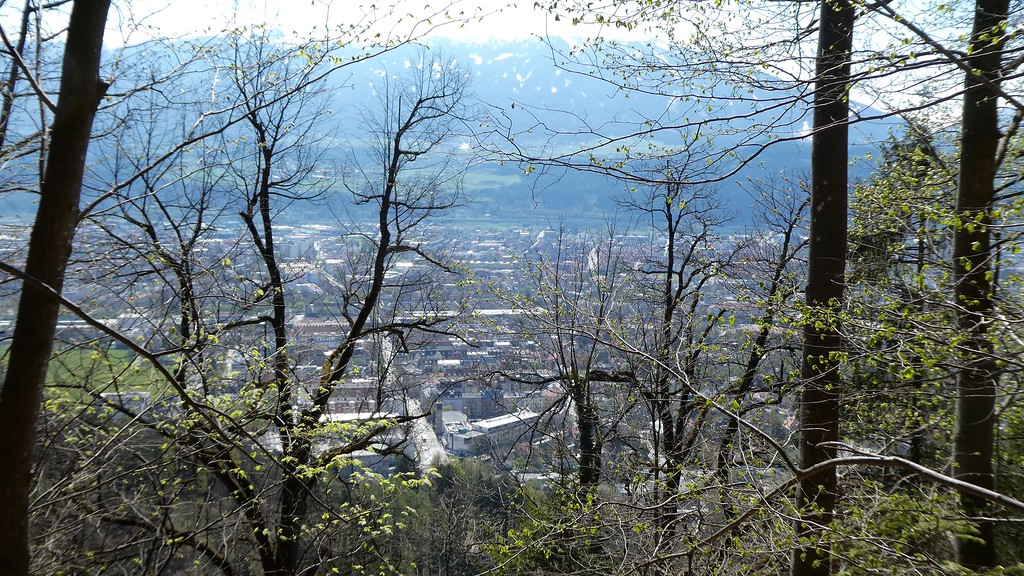 The funicular tracks, old and new

This was much better than riding down! 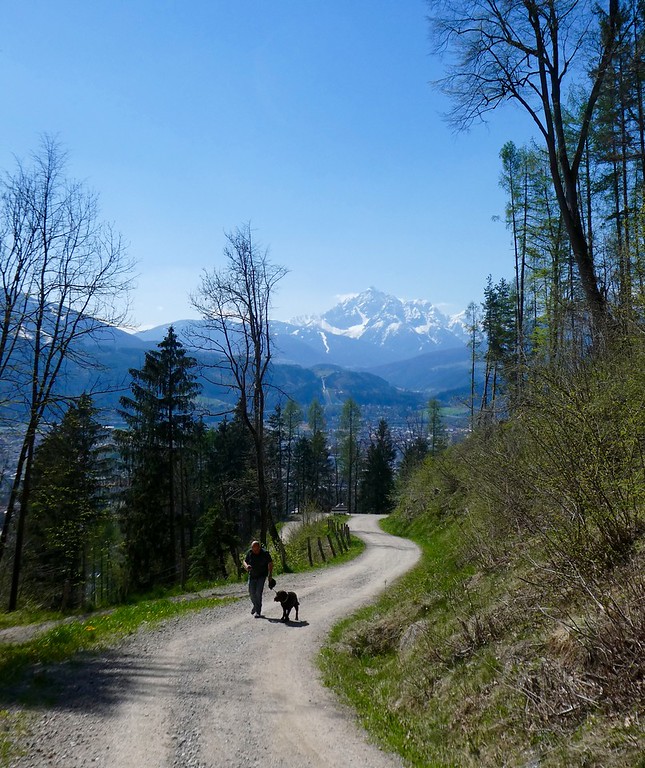 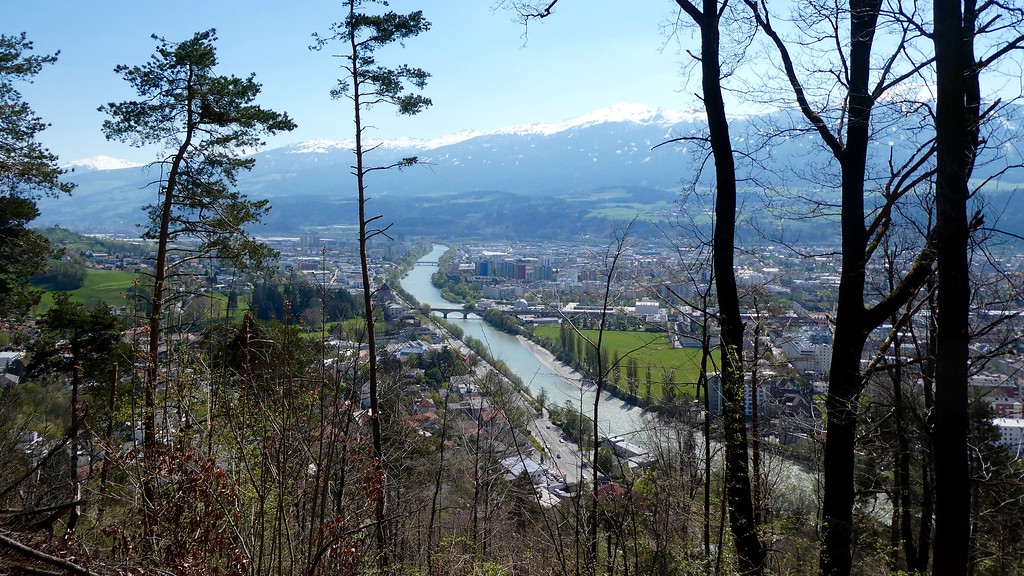 At some point we realized that we still had a long way to go, we weren’t sure where we cross the river, and that the sun was getting pretty hot. We had gotten as far as the Zoo, which was a stop on the funicular track. We made our way to the empty station and waited for the train to come down the steep track.

Back in the city, we were heading towards our hotel, ready to drop off our mountain-top jackets and sweaters. It had gotten quite warm out! But before we could get very far we got distracted: the original Sacher Torte shop! 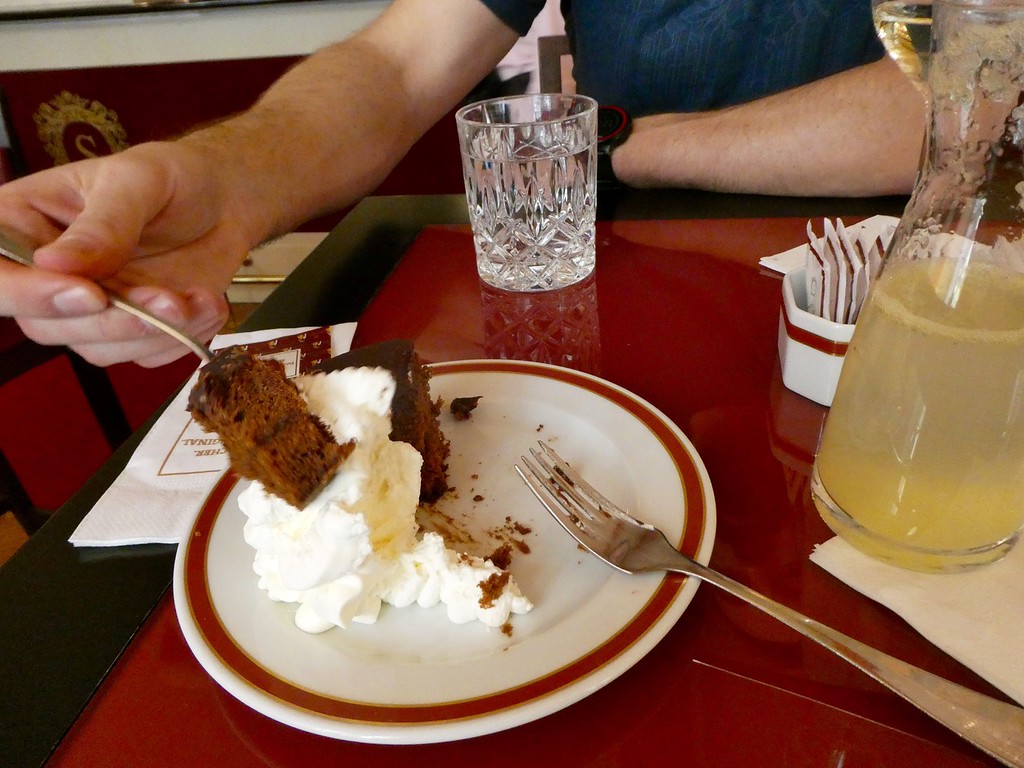 Checking out a liquor store nearby 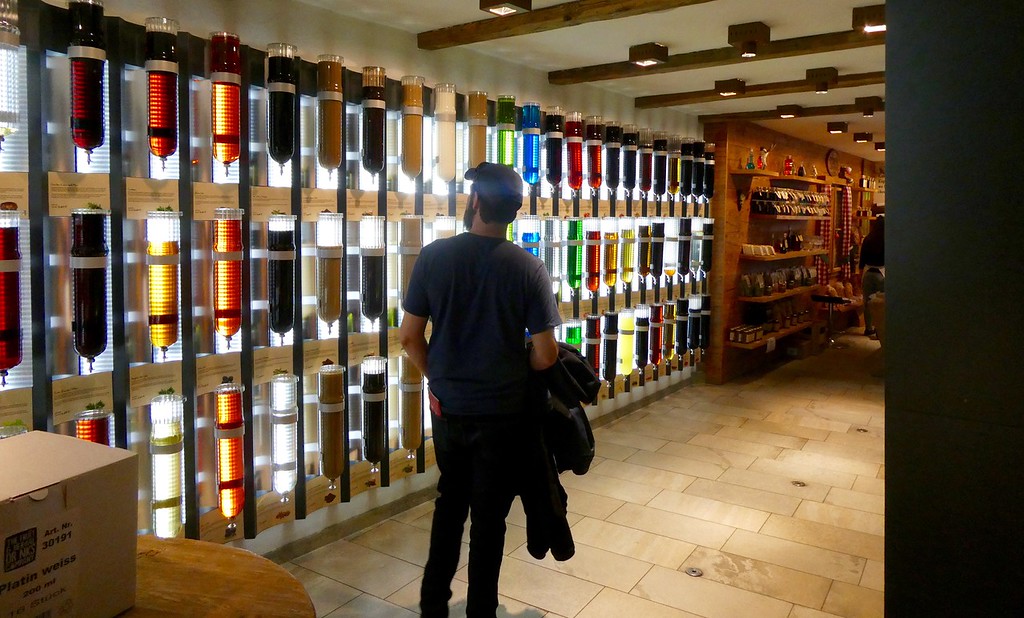 Goldenes Dachl (The Golden Roof) – “Completed in 1500, it is decorated with 2,657 fire-gilded copper tiles for Emperor Maximilian I”

We stopped by the hotel room, got a change of clothes and refreshed ourselves, and then went back out to the bustling streets of the town 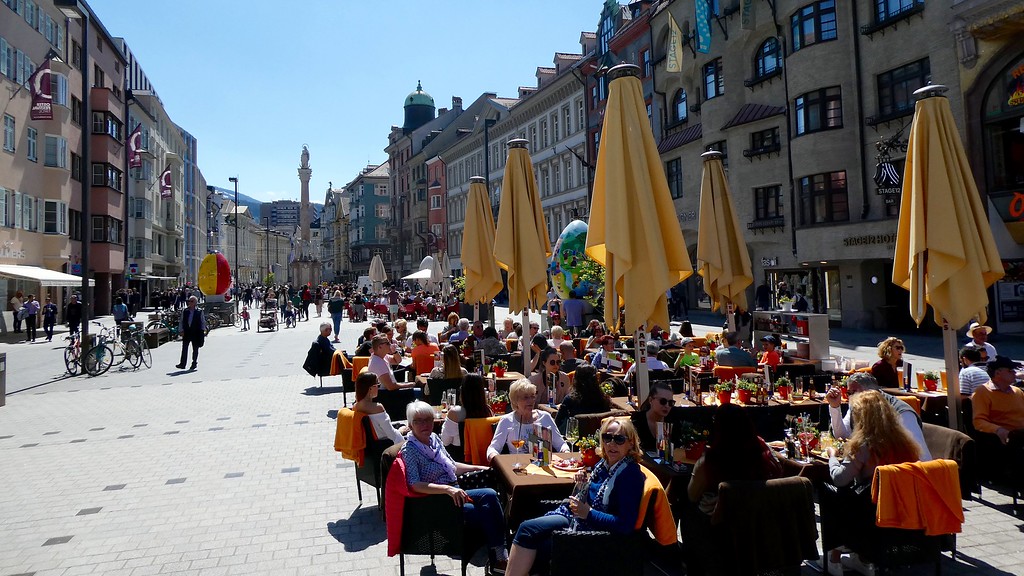 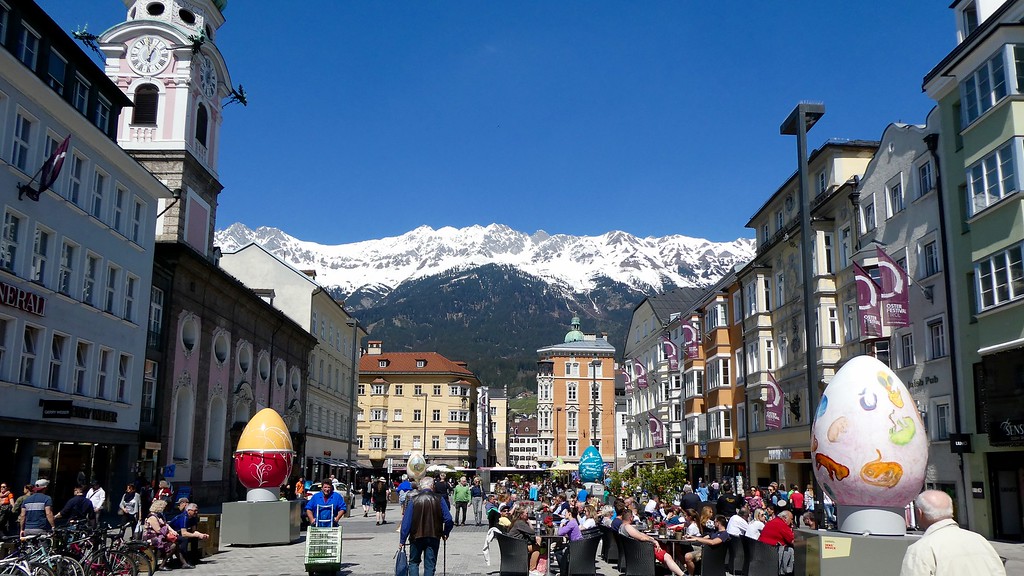 The streets were lively with tourists, but what really added to the energy of Innsbruck was the college students. Out of the 130,000 people who live there, 30,000 are university students. University towns always have a vibe to them that makes it feel more vibrant.

Innsbruck also had a lot of really beautiful bugs 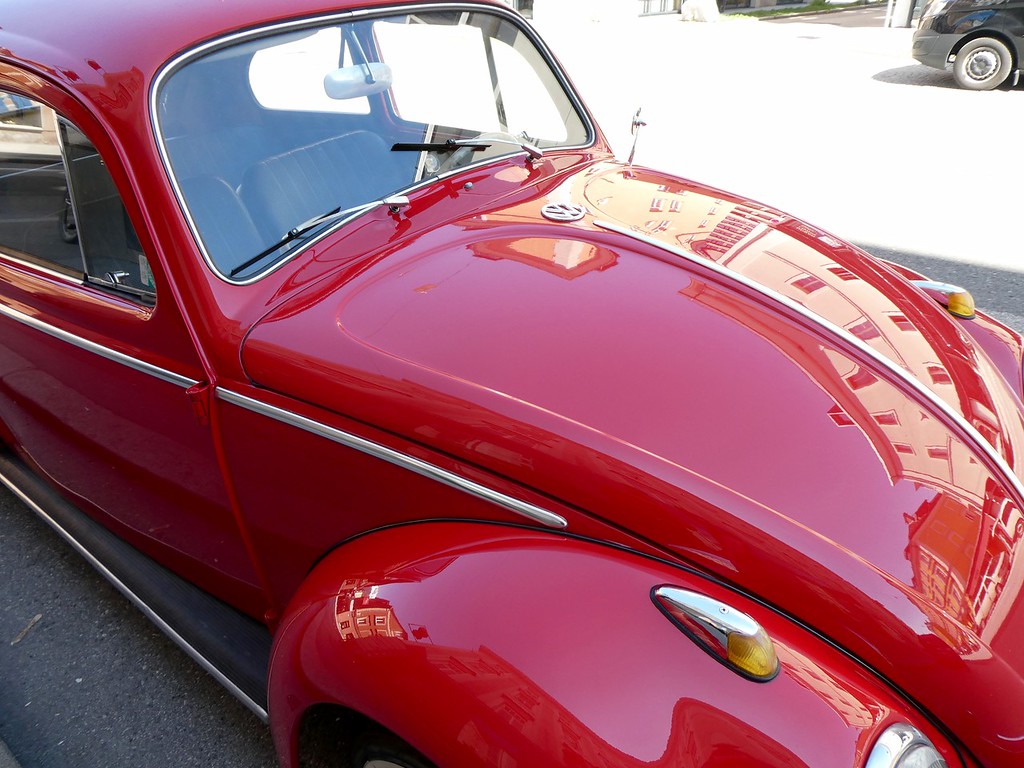 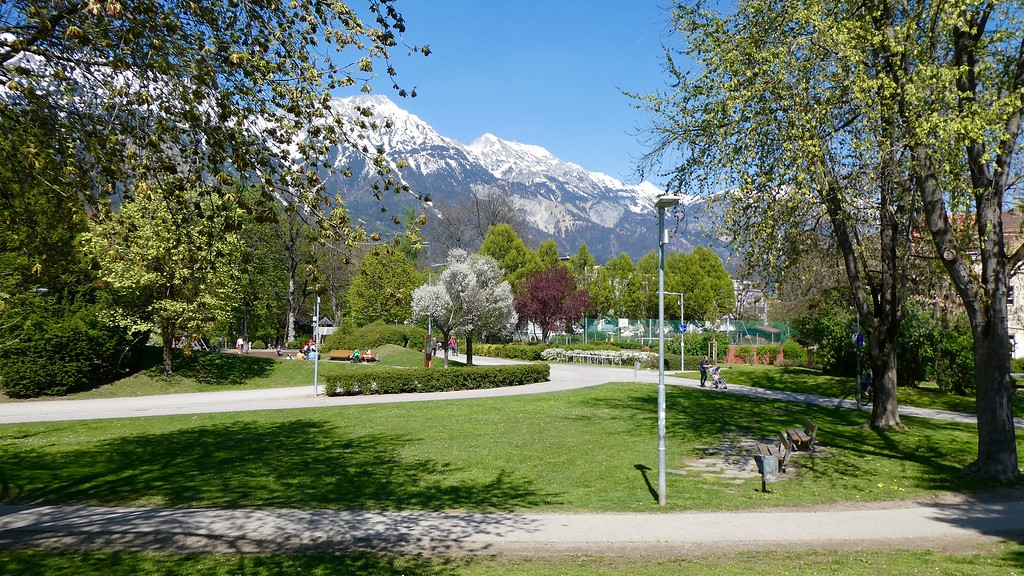 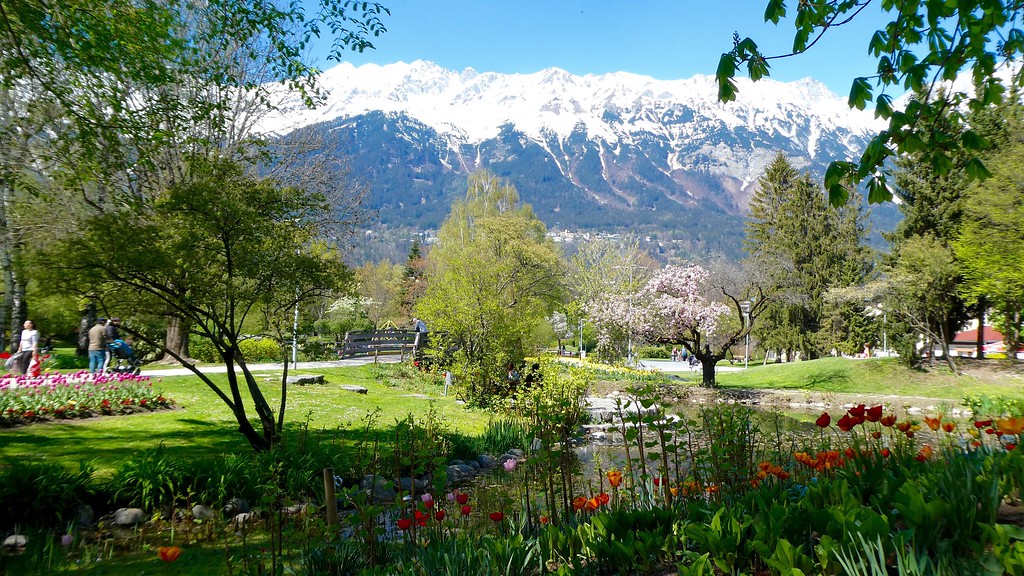 As usual, Dan and I did more than just walk through the city’s old center. There are thousands of photographs of these historic centers, but we wanted to see where the “real people of Innsbruck” live. So we went down some random side streets and explored the less-romantic side of the city. 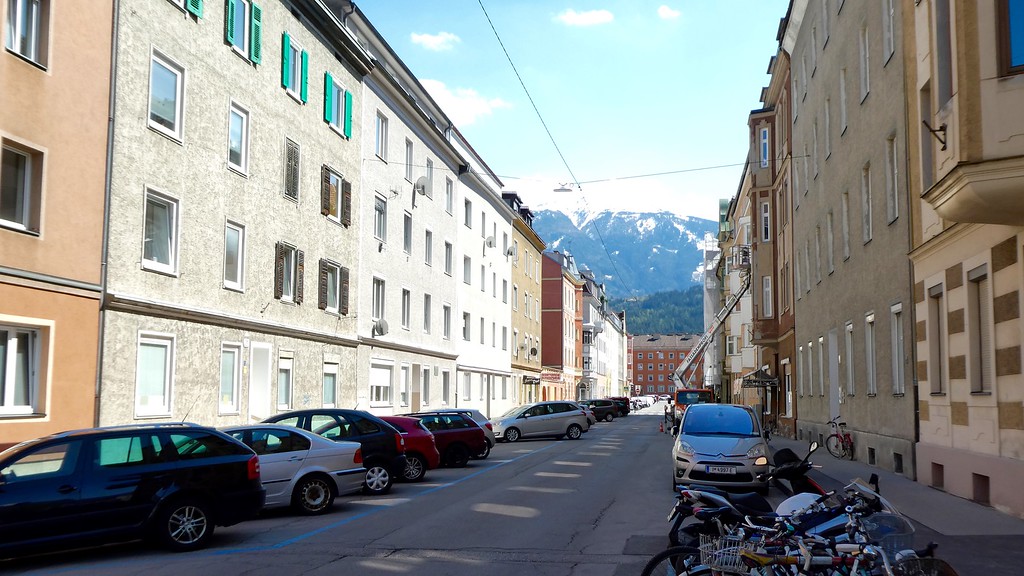 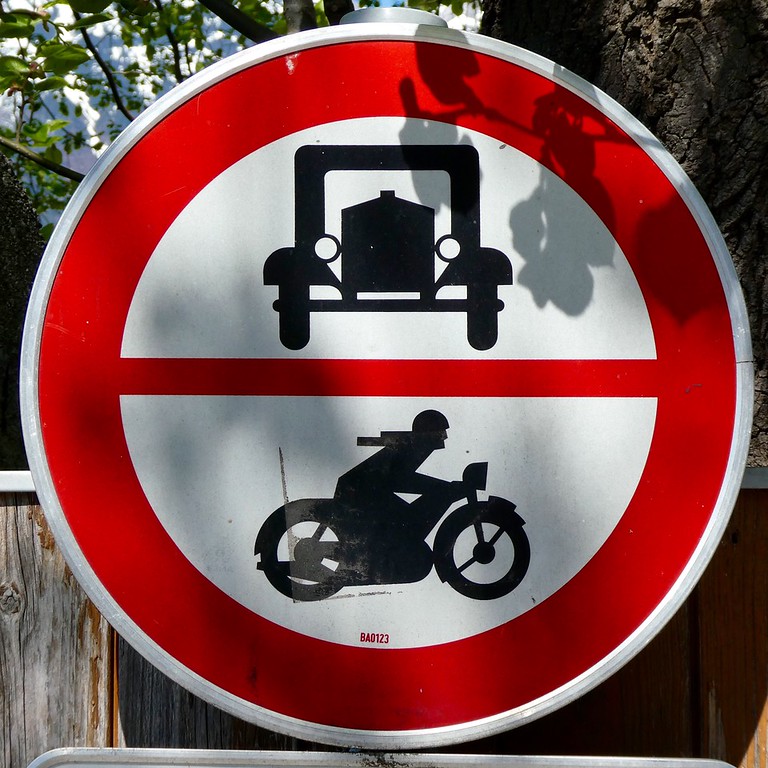 That night we went to a highly reviewed restaurant, die Wilderin. It is touted as using regional and seasonal ingredients in their Austrian dishes. I was looking forward to having some authentic, local dishes and we arrived early since we didn’t have any reservations. The staff was very friendly and although they didn’t have any tables available, they said that we could sit at the bar to eat. This sounded good at first, but the meal ended up taking a long time to finish and mid way through, I found myself very uncomfortable. The food itself was ok. it wasn’t nearly as good as I had hoped, as the beef was tough and the polenta didn’t have much flavor, either. By the time we finished it was late and we went back to our room for some last-minute planning for Saturday.