Corinne had asked when we wanted breakfast and we agreed to seven thirty. It seemed early, but based on the time we normally got up at home, and with a full day of exploring to do, it was reasonable. A nice breakfast was laid out for us and afterwards we hopped into the car for a return to Alise-Sainte-Reine. It was a brilliantly gorgeous morning, completely contrary to the weather forecast. I was a little annoyed, as the roads we took to get back to Alésia were perfect for two wheels. Not to mention the ease with which I can take photos, whereas I generally need to stop the car if I want a particular shot. Although some times I just shot through the windshield, or asked Dan to pick up the camera. 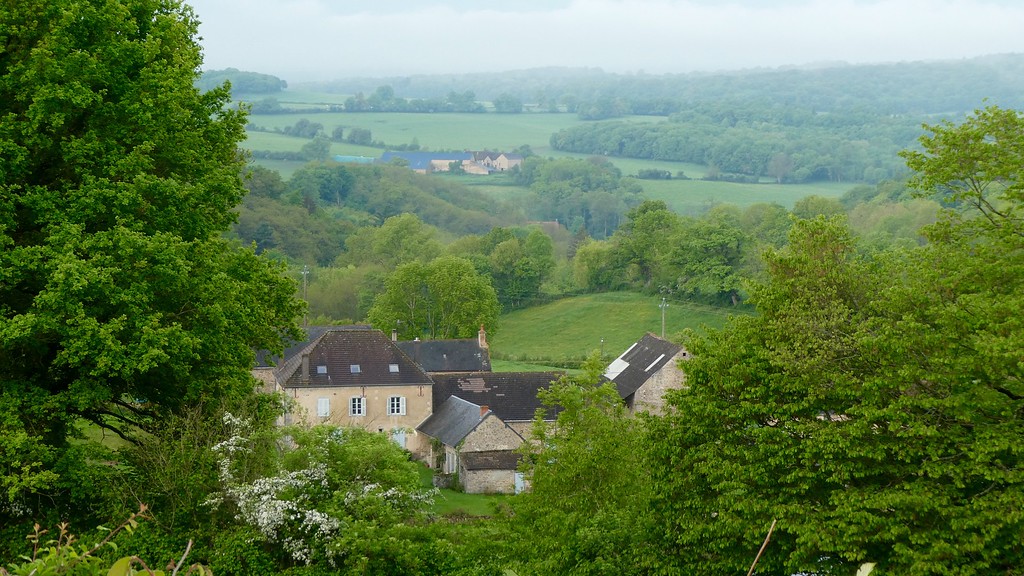 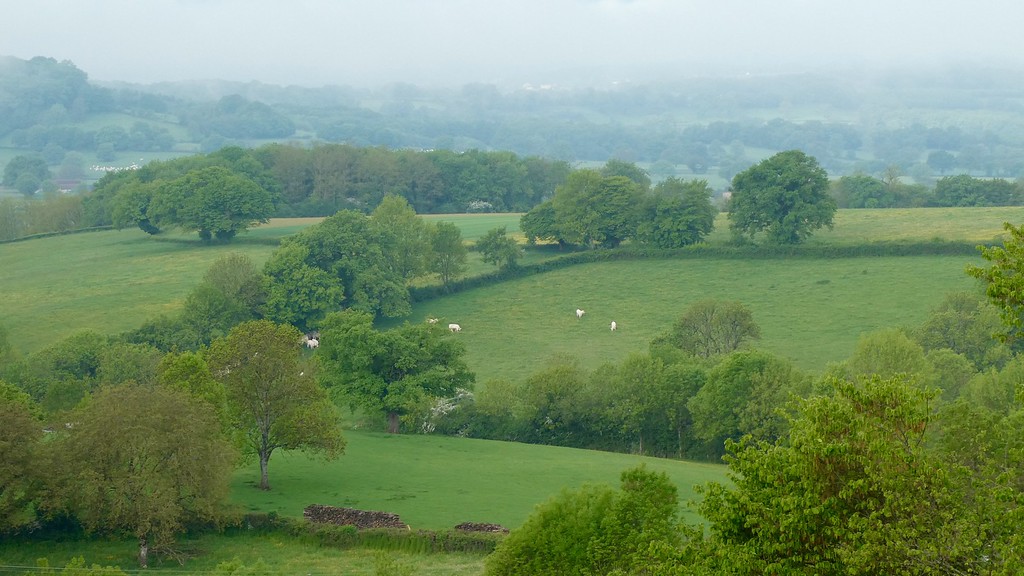 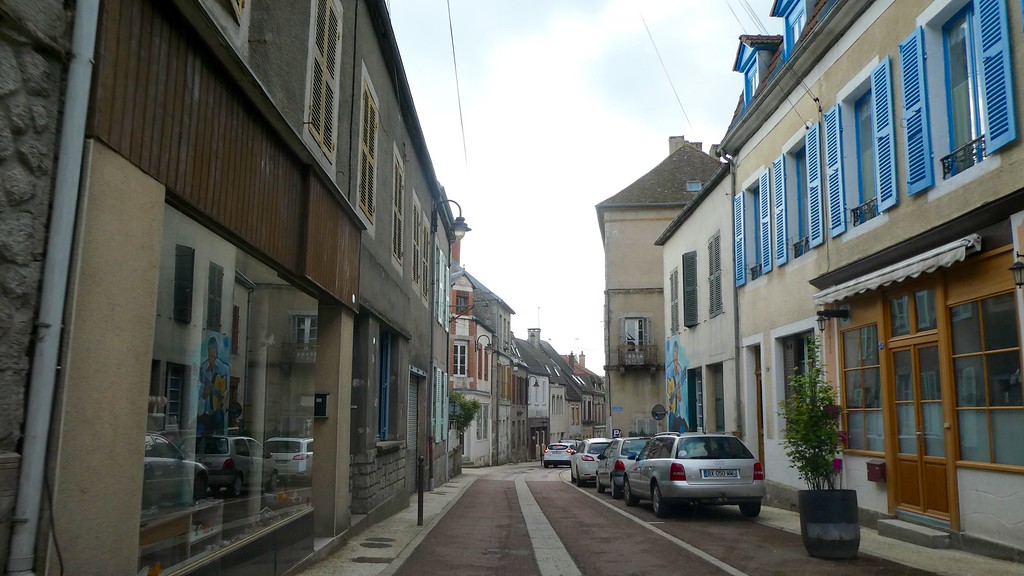 Dan and I were both struck by how beautiful the Burgundy countryside was. Other than extensive visits to our little corner of France (Alsace), our only real previous experience with France had been a drive through the northern portions when we visited Normandy and a short ride to Verdun. Then, we had seen mostly flat and uninteresting countryside. But here there were rolling hills, lines of hedges bisecting green pastures, lush forests and some of the most perfectly shaped trees I’ve ever seen.

Goofing off in the sunshine

One thing we had noticed was the presence of the Burgundy canal system. We passed by various sections of the canal numerous times and at one point, we stopped to check out one of the locks. 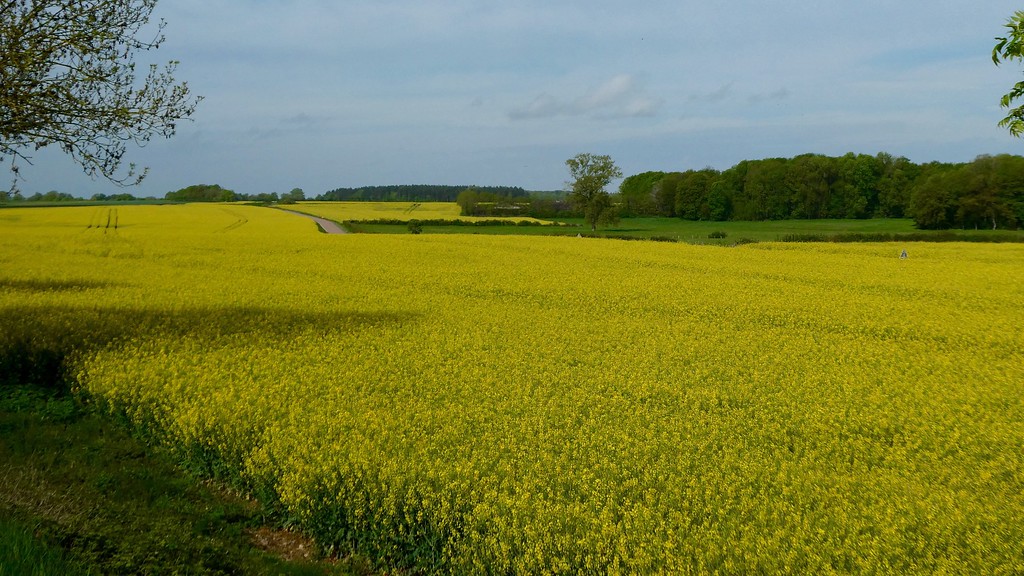 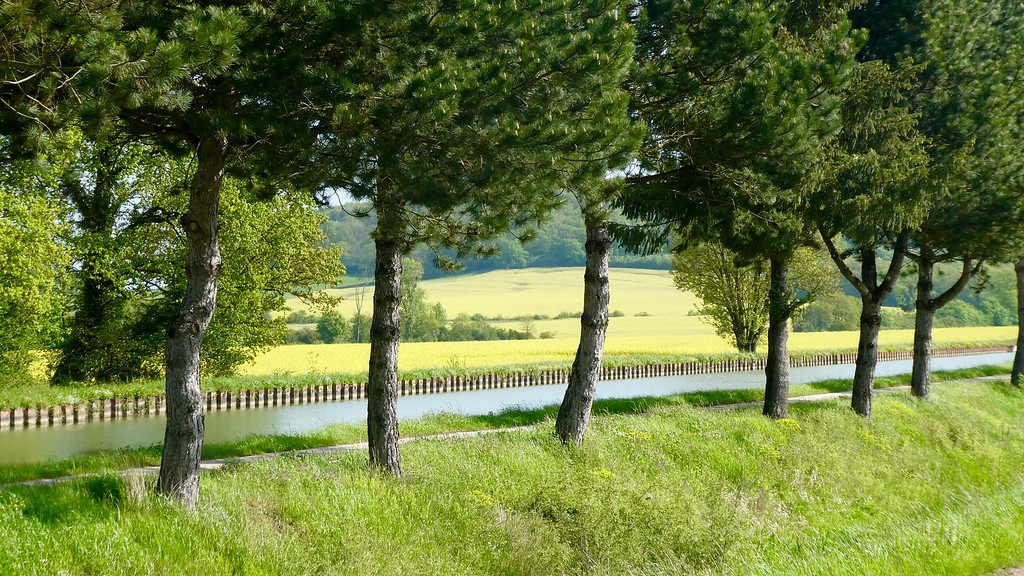 While the canal itself looked inviting for a leisurely boat ride, the bicycle path that ran along side was even more enticing. With a bicycle, what would be covered in seven hours in a boat could be covered in only one to two hours, meaning that more places could be visited in a limited amount of time. Plus, a bicycle meant that one was free to explore further away from the canal itself. Clearly this needs further investigation. 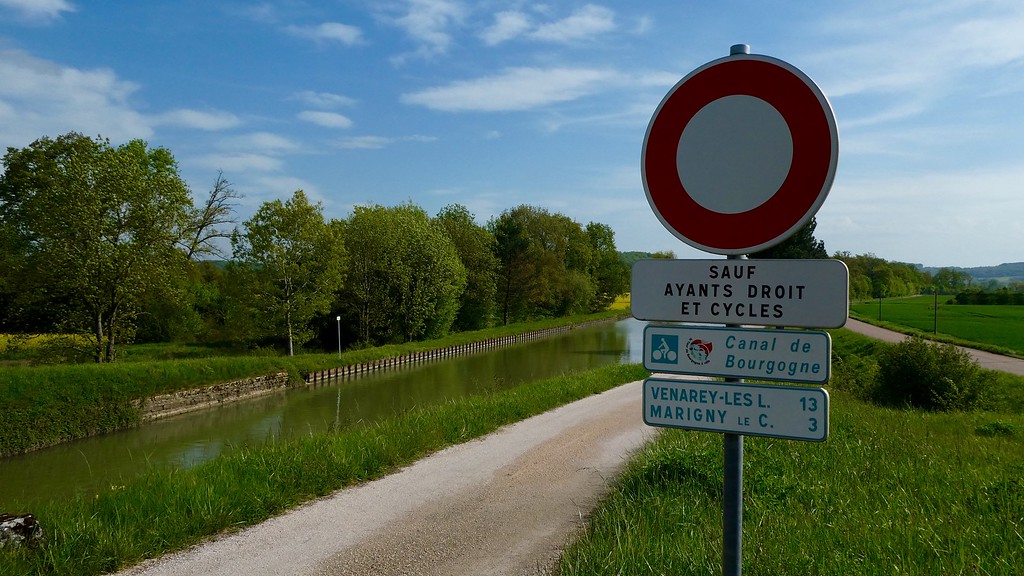 We had reached MuséoParc Alésia, where we had left off the previous day. The sun was shining, a light breeze was blowing and we strolled around the archeological sites, reading the plaques that explained what we were looking at. It was a good thing, too, as to my untrained eye, most things were just piles of rocks. I give credit to archeologists who not only have the patience to uncover these findings, but to interpret just what they are finding. 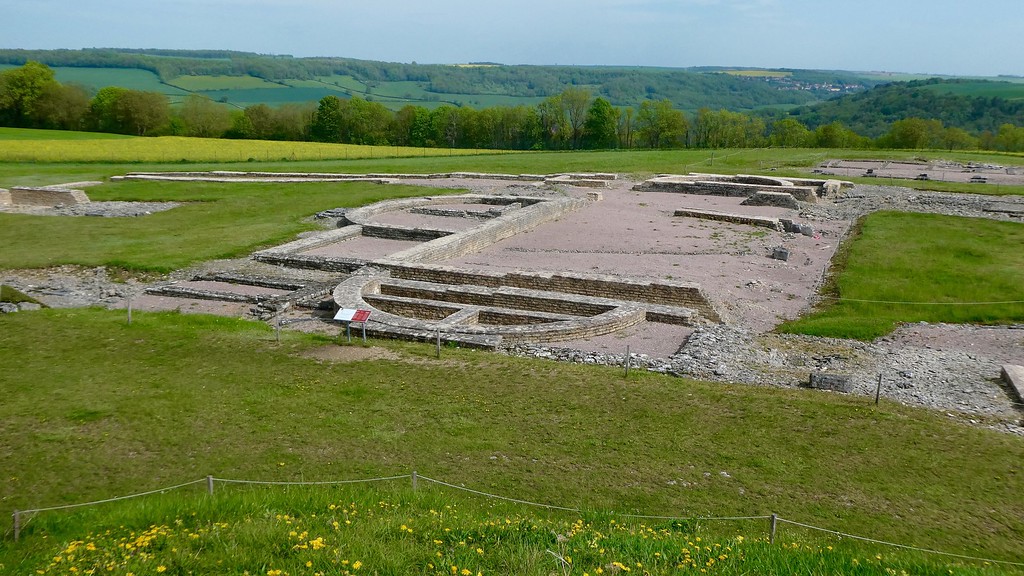 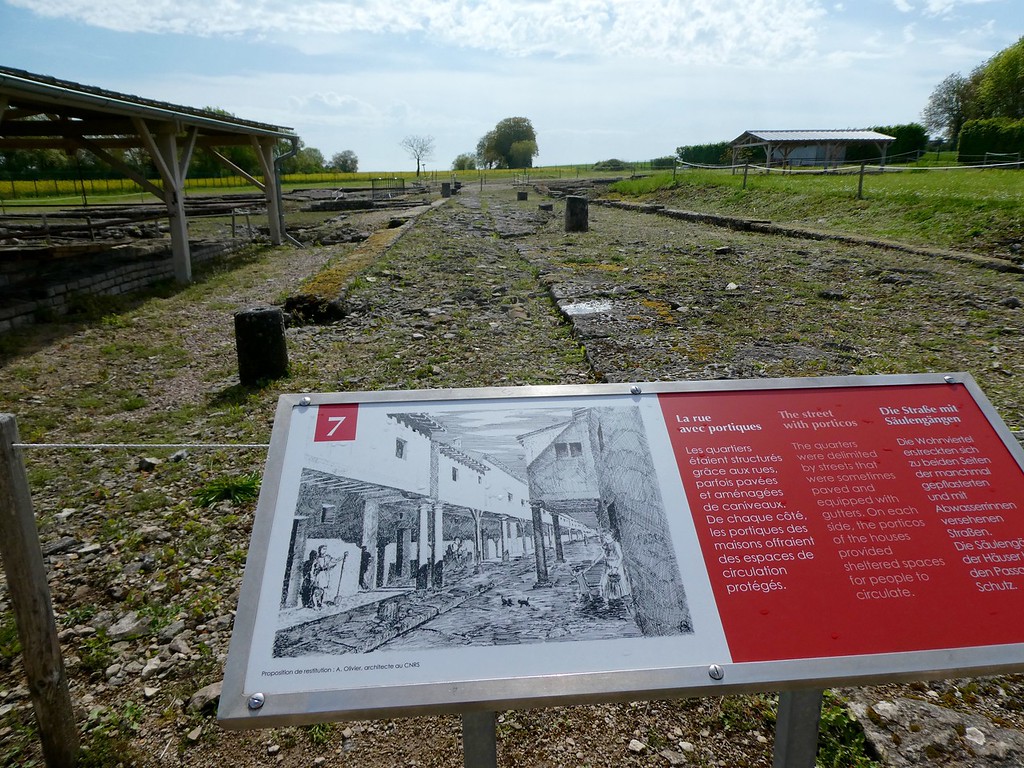 After inspecting the ruins, we popped on over to the statue of Vercingetorix, the Gaulish “king” who had given Caesar such a hard time over 2,000 years ago. It was a nice statue, but there wasn’t much else to see in the area.

A much more interesting statue of Jeanne d’Arc 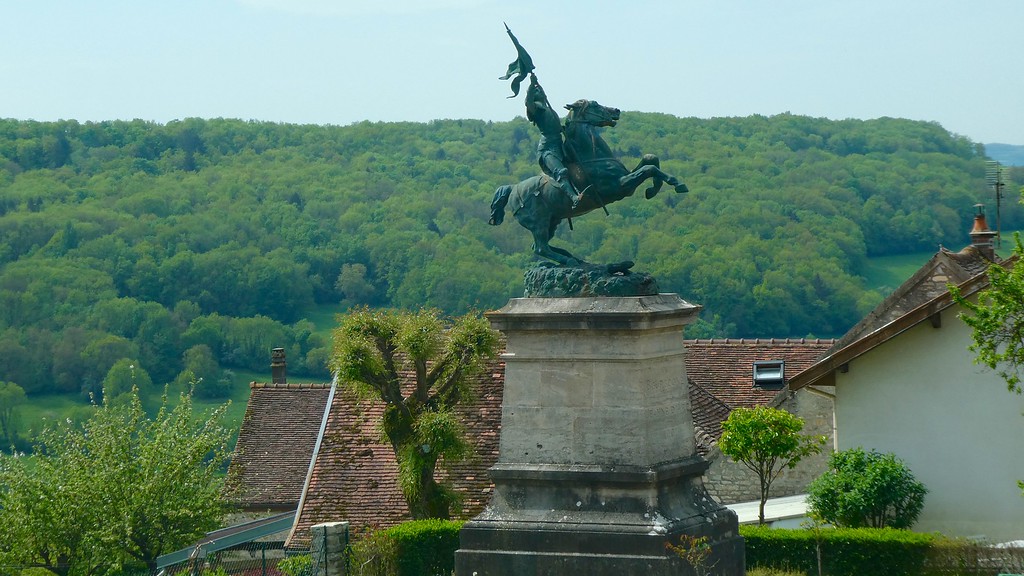 We had seen signage for the Fontenay Abbey, indicating that it wasn’t far away so we decided to move on to something more modern. Instead of 52 BC, we’d jump ahead to 1118 AD. Not bad! The Abbey was easy to find and there were few cars in the muddy parking lot. The weather was still beautiful and I was missing being on two wheels. But still, I countered that with the fact that I could explore these historic sites without the creak of boots and the swish of textile pants.

There were few guests on the grounds and Dan and I proceeded to try to match the guide map handed to us at the entrance gate with the buildings we saw before us. Everything was very well maintained and true to how the monks had built it 900 years ago, even if it had taken some efforts to undo some of the more modern buildings that had been added in later years.

Exploring the grounds of the Abbey (kennel and dove cote) 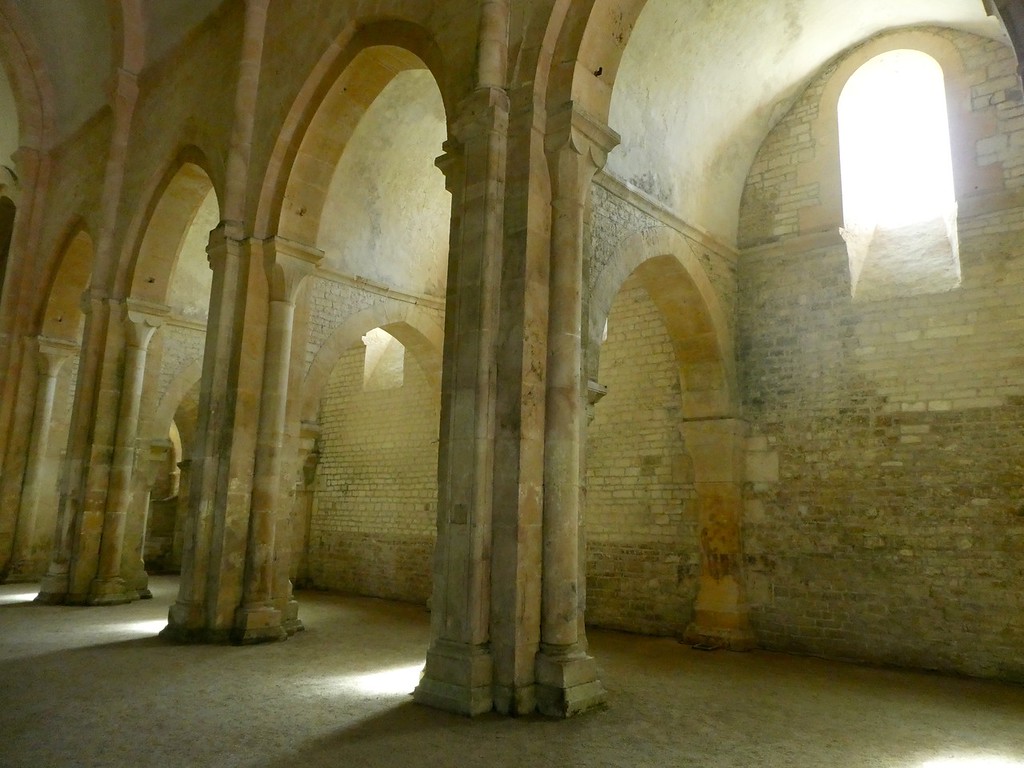 “Virgin of Fontenay” – sculpted in the late thirteenth century 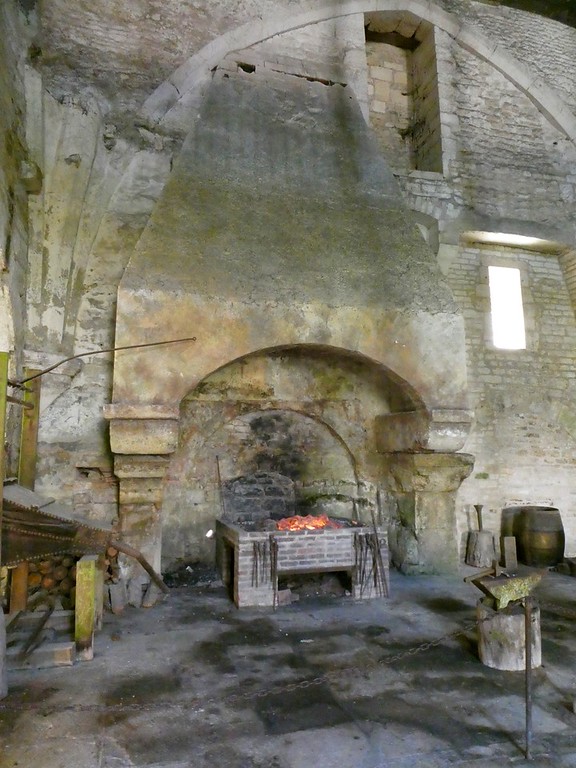 The birthplace of the hydraulic water hammer

We had visited all of the buildings and since the gardens were closed to the public, we decided to get back on the road and look for something else to grab our attention. 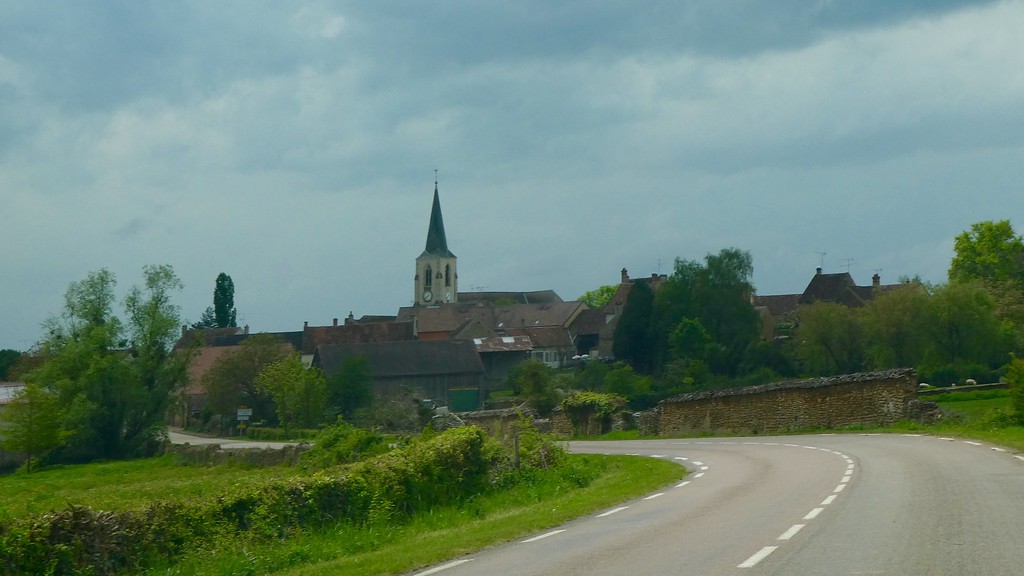 We were on our way to Château de Bazoches to see the beautiful building that we had passed by yesterday. The roads were delightful and dry and the scenery was as beautiful as ever. As we entered Morvan Park again we saw a small sign on the side of the road: Chapelle Templiers (link in French). The road was marked as “Private” and was just two tracks in the dirt, but we figured that it couldn’t be that private, if someone bothered to put up a sign about the church at the end of it.

We made it to the church without any issues; the only people we saw were a couple of guys fishing at a nearby pond. The church was built by the Knights Templar in the 1200s (if I read the link correctly) and has gone through a lot of changes during its lifetime. In fact, it is currently a private residence, and had been used as a barn just before that. 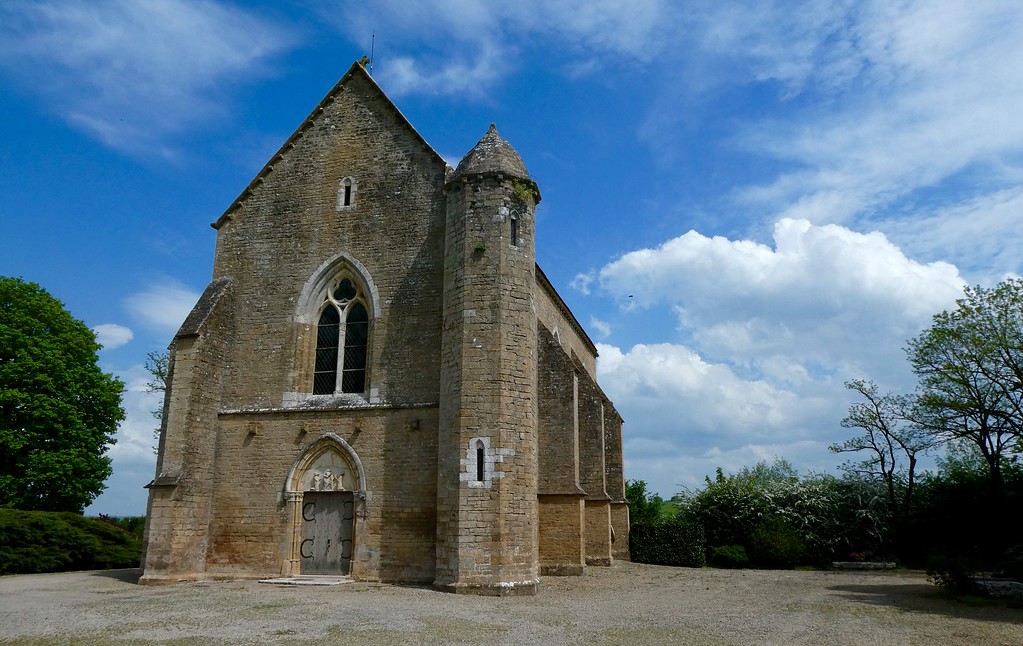 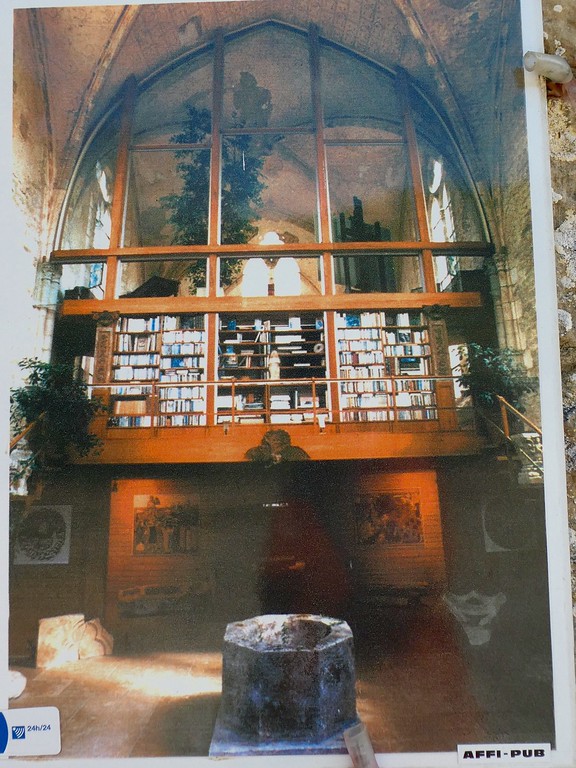 Two guys fishing near the truck

With nothing to see other than the exterior of the building we wandered back to the car when we were distracted by a huge woodpile in the forest at the edge of the property. We headed over to check it out, greatly surprised by what we found.

It is more than meets the eye!

You’re not putting this wood in your fireplace 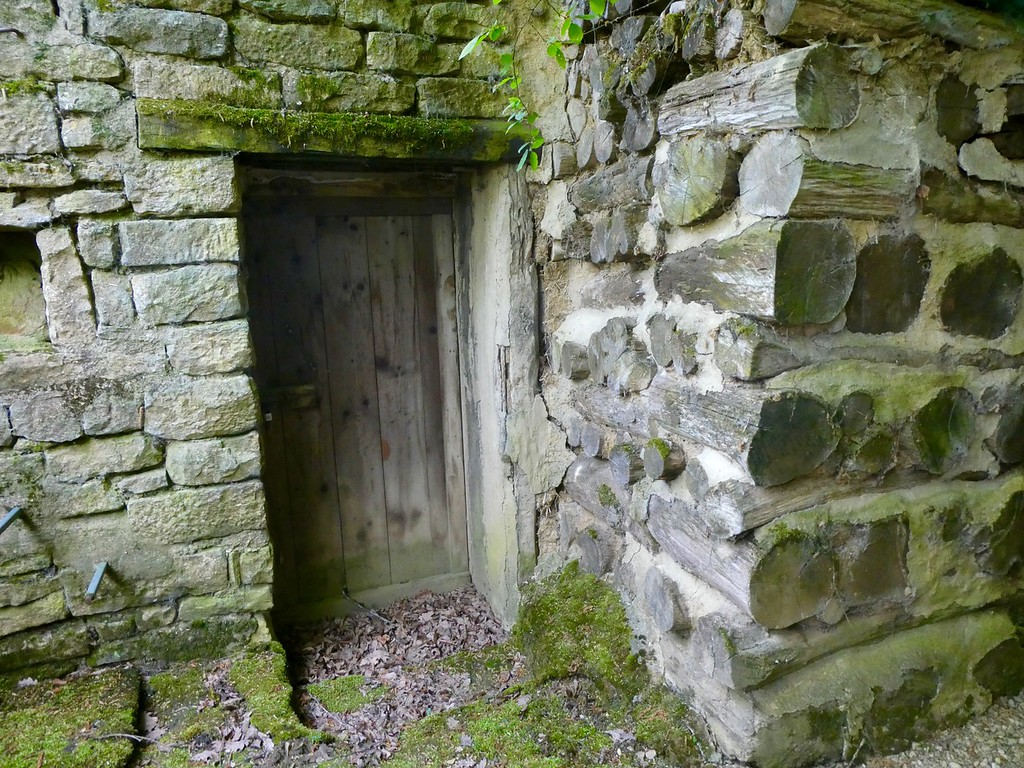 Ok, NOW there was nothing left to look at. We got back in the car and on the main road. During this time, the bright sun had taken a backseat to the clouds, but it was still a beautiful day. The roads were clear and enjoyable, with just a tad of familiarity since we had just been on them the evening before. As we crested a small ridge, I saw a large building on a hilltop. I had seen it yesterday and it had piqued my interest. Now that we were on a Mission to Explore, it was a good chance to check it out.

The town of Vézelay

We drove up to the town at the top of the hill, parked the car and got out for further exploration. The main street that lead to the Cathedral at the top of the hill was full of people milling about. Most of them had hiking poles, rucksacks and a little tag attached to their gear. What was going on? It turned out that it was something to do with a meeting of a French Alpine Society (that’s a really big guess on Dan’s part). Anyway, the streets were teaming with people and the atmosphere was jovial.

Ok, not ALL of the streets were teaming with people 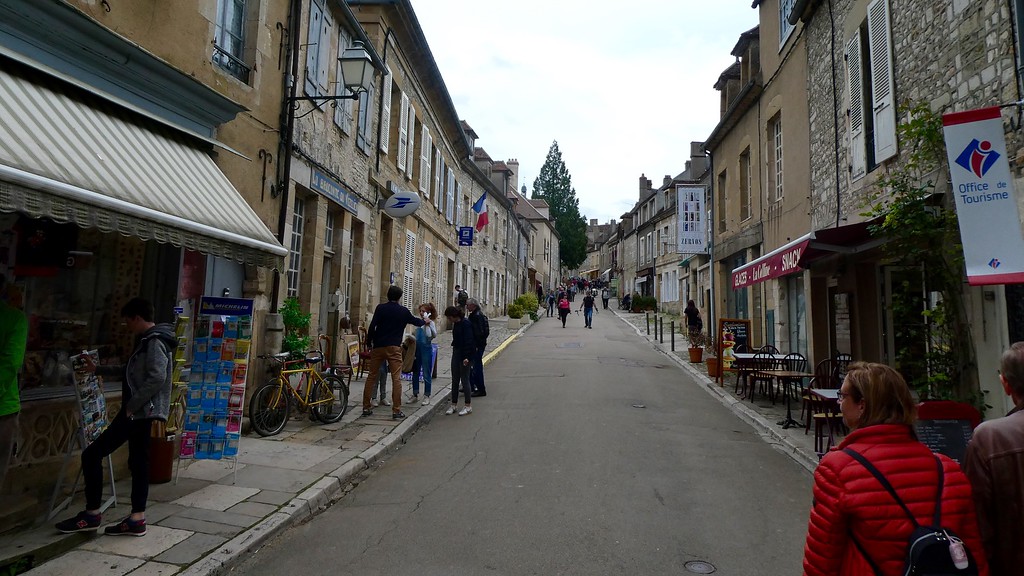 The Abbey was impressive – and almost empty. Apparently the trekkers had more important things to tend to, which was fine by me. I walked quietly through the solemn aisles and admired the detail and craftsmanship that had been done so many centuries ago.

The door behind the door

It was after I took that last picture that Dan informed me that I wasn’t supposed to take photos inside the church – whoops. As the church was relatively empty of not only people, but also decoration, it was easy to give it a look and then head back outside.

Looking back towards the church and nearby buildings

Lilac blooming in a wall ruin

While we were taking in the view from the park at the edge of the hill there was a distant rumbling: thunder! We could see the sky darkening on the horizon and it was coming our way.

There would be no escaping this storm!

As the wind blew the storm closer to us, and the thunder grew more and more ominous, I played with the camera. I had recently purchased this Panasonic DC-TZ91 for Dan, with his criteria being “fast start up and awesome zoom”. To say that the zoom is “awesome” is an understatement. For instance, take this photo of a farm in the valley:

Did you notice the tractor in the yard? I didn’t think so. Let me help:

Pretty impressive, isn’t it? Ok, enough about the camera. The rain was coming and we had left all of our rain gear in the car. On the other side of the village. It was time to make tracks.

But first, let’s look at that view again 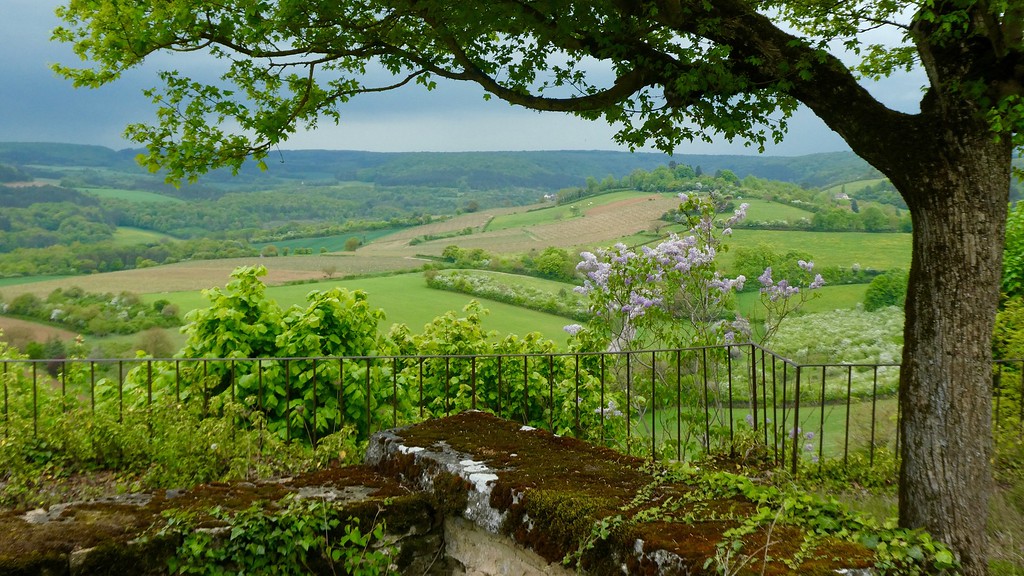 As we made our way down the street the rain started to fall. We ignored it for a little bit but then realized that we should probably find some shelter. We ducked into a large doorway and watched the goings-on out on the street. 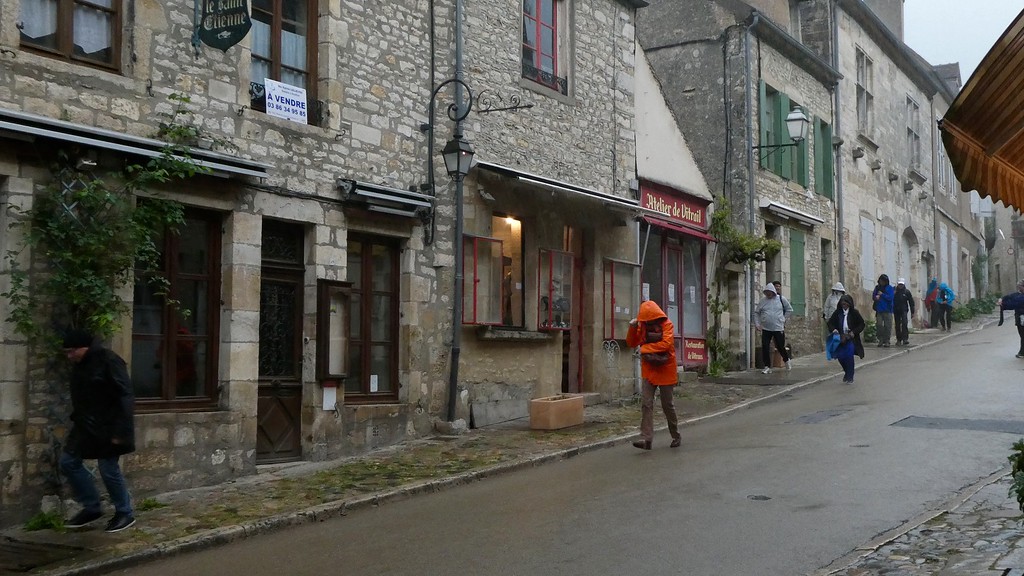 Then the skies opened up. The hard rain pelted down, slipping into a bit of hail before resuming back to a drenching rain. But, like most sudden thunderstorms, it passed by almost as quickly as it had appeared and we were able to walk back to our car without getting soaked. 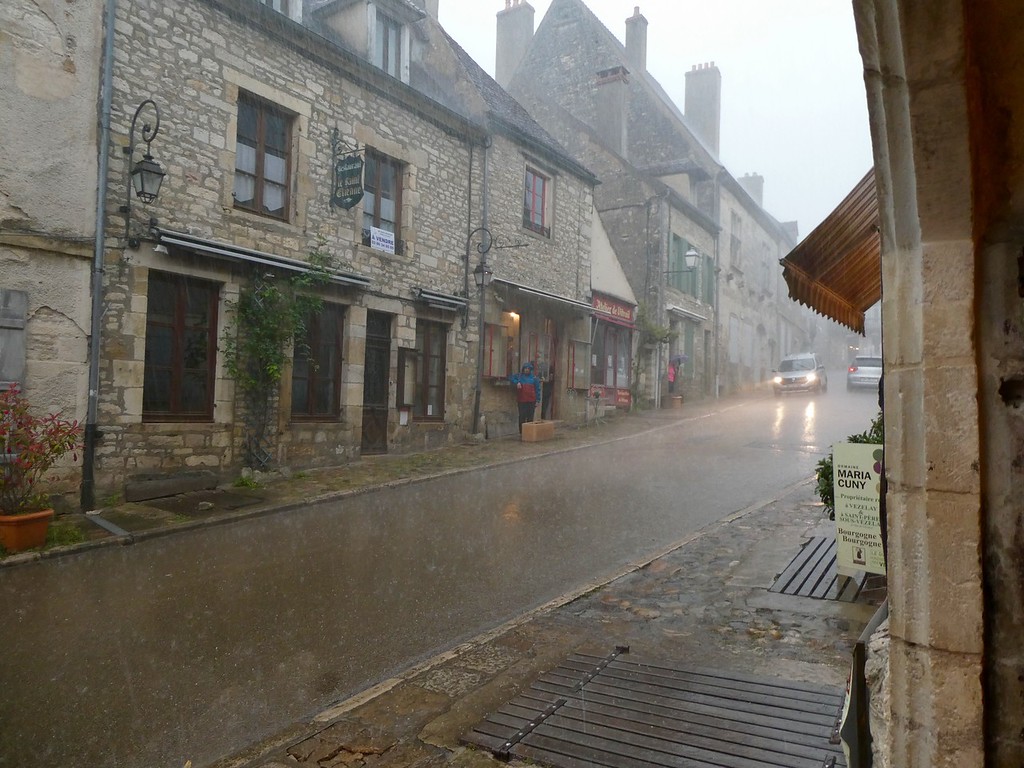 Not everyone had found a sheltering doorway

Now that the rain had passed it seemed a little silly to leave the town, but we had already reached our car and we still had some more sites to visit. To the Château de Bazoches!

Like most châteaus that I see up close, they always look better from a distance, or at least from inside. The French châteaus I’ve seen usually have an expansive but plain facade, while I generally prefer buildings with more intricate exterior designs. At least the towers were nice. And since the rain had not completely dissipated, so it was nice to know that our next tour would be inside.

The château was still occupied by the owners, but about half of the building was open to the public. This chateau has been in the Vauban family since he bought it in 1673 and his descendants still maintain control of the lands. That’s a lot of generations to keep something in the family! But who is this “Vauban” person? He is known for his dedication to greatly improving fortification defence and attack systems. His work can be found all over Europe, in over 300 cities. And his efforts didn’t just stop at war, but also included topics such as routes for canals and inland navigation; on privateering at sea; on forestry and pig breeding; on overseas colonies… the man did not rest! Dan and I had even visited one of his fortifications when we visited Neuf-Brisach a few years ago.

Inside the château, the rooms that we had access to were richly furnished and left as though Vauban would be home any minute to continue his work. His library was even there, with over 5,000 publications on the shelves. 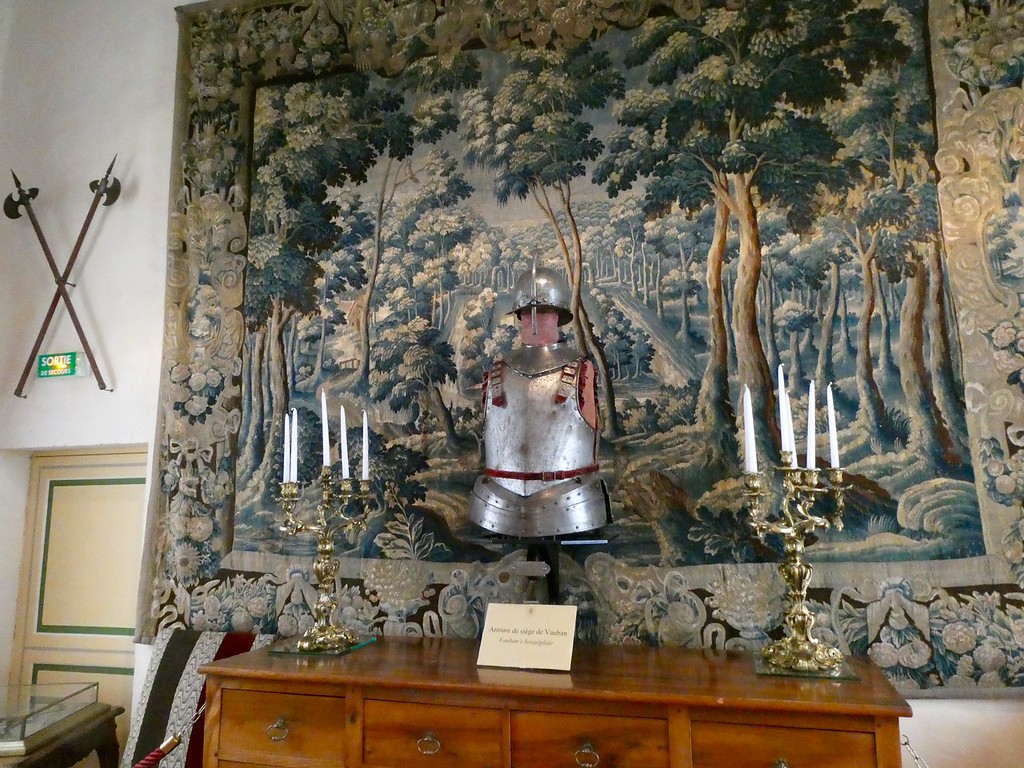 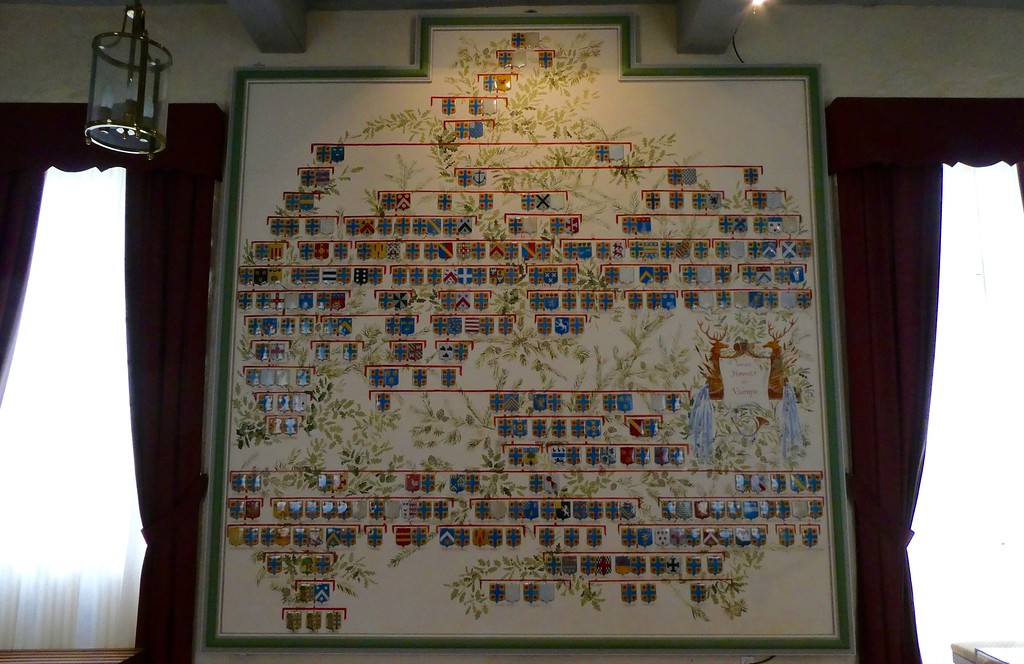 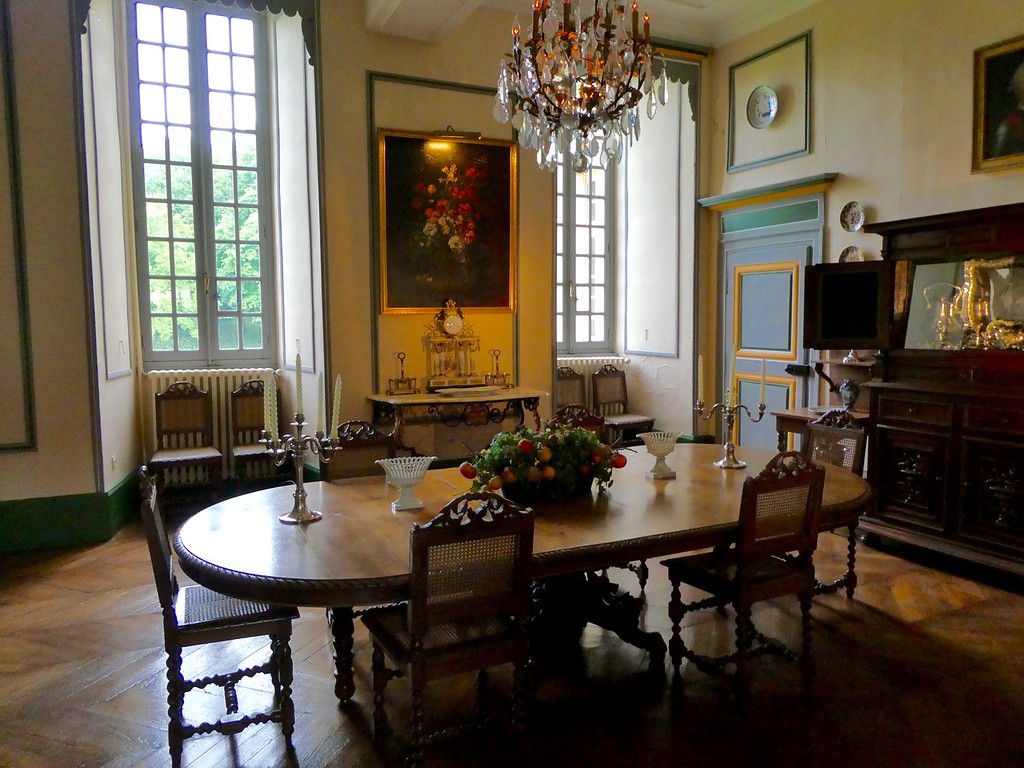 “Melted” glass in the bedroom window 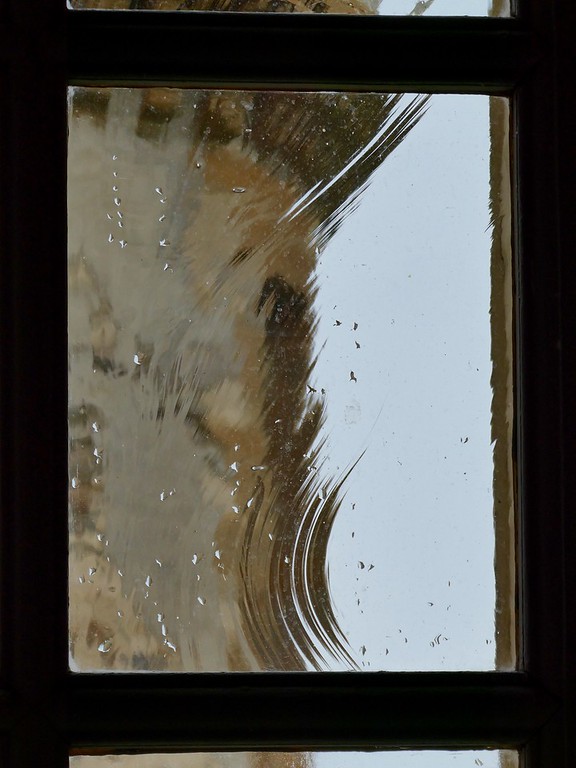 I know that this day is already overflowing with photos. but after Bazoches we went back to Corbigny and walked around a bit, looking for dinner. The rain was still with us (ha! The forecasters got something right!) but at least we had our umbrellas and rain jackets now. 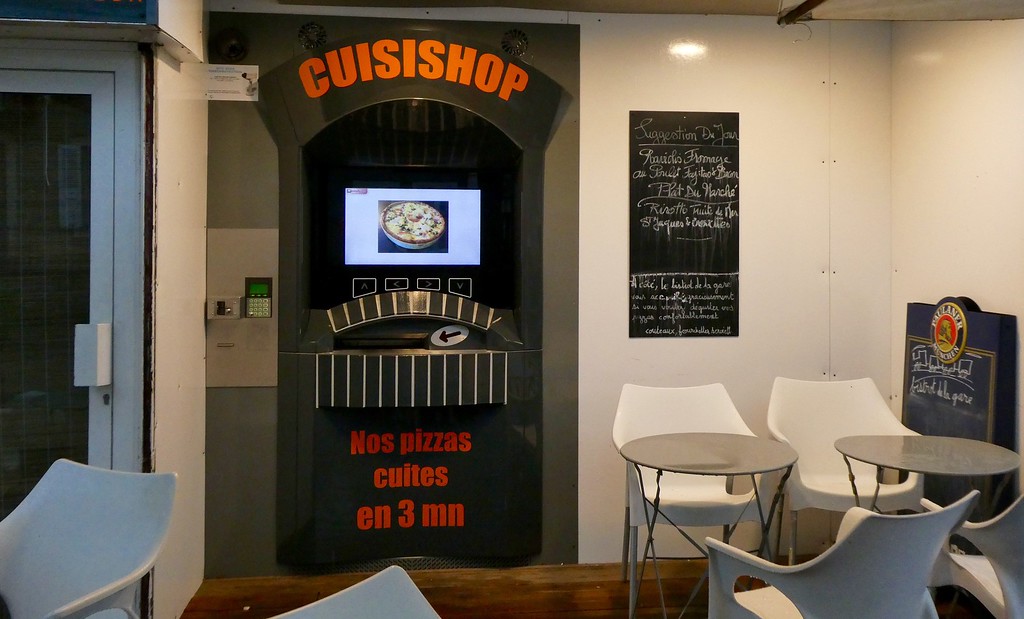 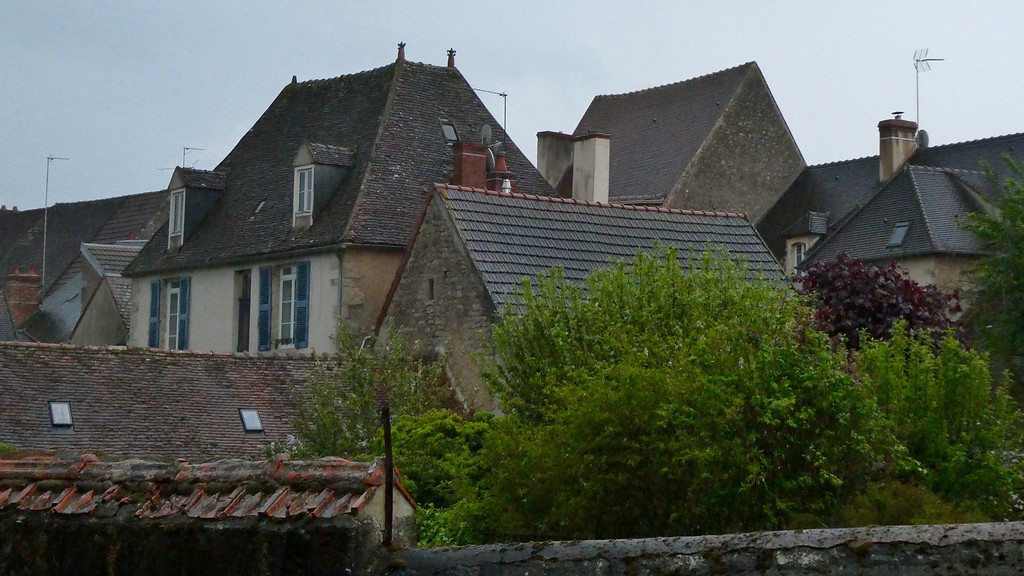 Framed on the L’Anguison River 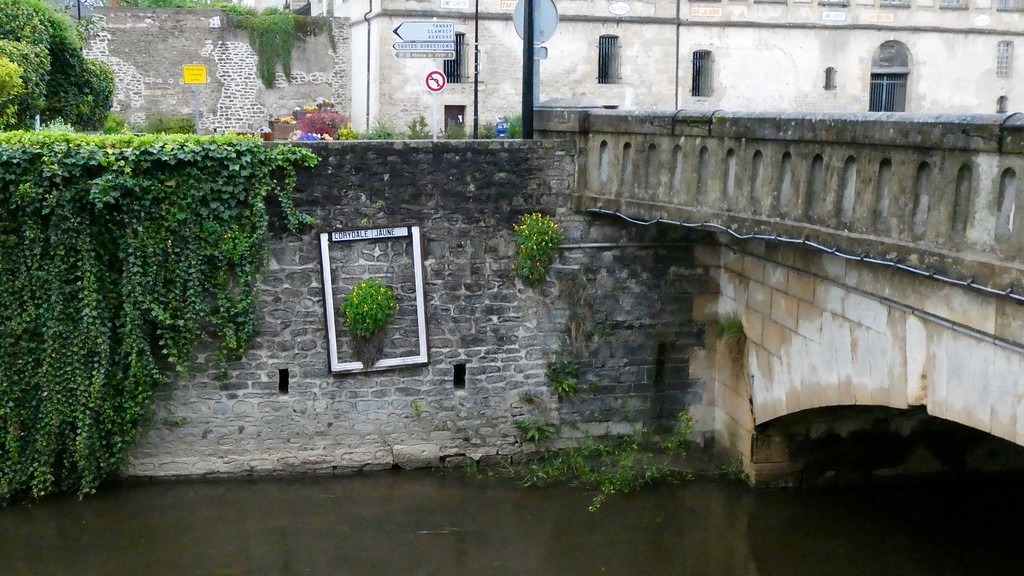 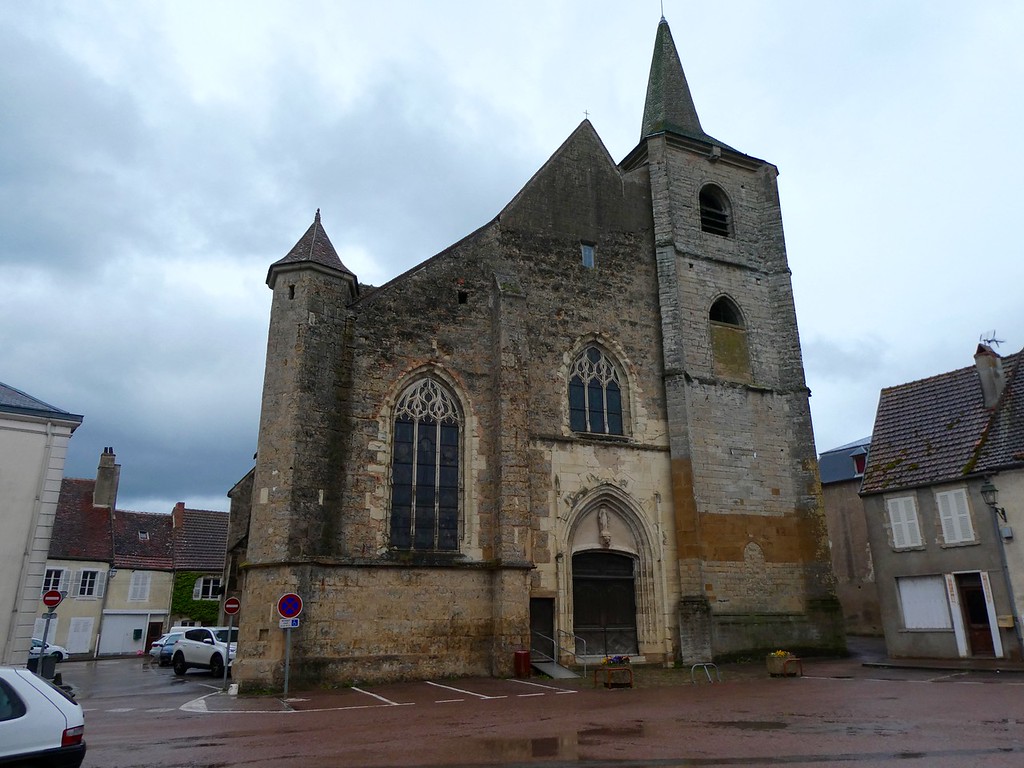 We finally found dinner at La Passion, near the train station. We were the first ones in for the evening meal and had actually just popped in for something to drink. But then some other people came in and ordered food, and we realized that it would be better to eat now while we were here. Dinner was good, the other patrons were polite and the atmosphere comfortable. It was a good way to end our day.