Another long weekend had snuck upon us. With me not currently working, I had to rely on Dan to let me know when his holidays were impending. Unfortunately, he’s not very good at that, so about a week before a four day weekend, I was suddenly in Planning Mode. What to do? Where to go? How to get there?

Together we decided that a motorcycle trip to Burgundy, France would be in order. It was close enough that we could get there easily on the motorcycles and then spend some time bouncing around visiting various sites. Excellent! I started to research where to stay and what to see, all the while keeping an eye on the weather forecast. It did not look good.

When we got up on Saturday I took one more look at the forecast: it hadn’t improved. Yes, we have rain gear and no, we’re not afraid of riding in the rain. But on a trip like this, a lot of the activities would include walking around various places (like chateaus and castles) – not something one wants to do in full rain gear from a motorcycle. Reluctantly, I suggested that we rent a car. Dan agreed and I made the arrangements.

I will say that renting a car is pretty easy for me here: I go online, make the reservation and then ride my bicycle into the city center to pick up the car. I can leave my bike there while we’re gone, waiting for me to ride it home once I’ve returned the car. I’m at the car rental agency and they inform me that they have given me an upgrade. After the bloatmobile that I had in Spain, I wasn’t too happy about this news. But they said that it was really the only car they could give me, given the last-minute reservation I had made. Fair enough. But then they told me it was an automatic. Sigh. Fine. It is the only car you have, I’ll take it. Besides, it was an Audi – it should still be fun to drive!

And we’re finally on the road! 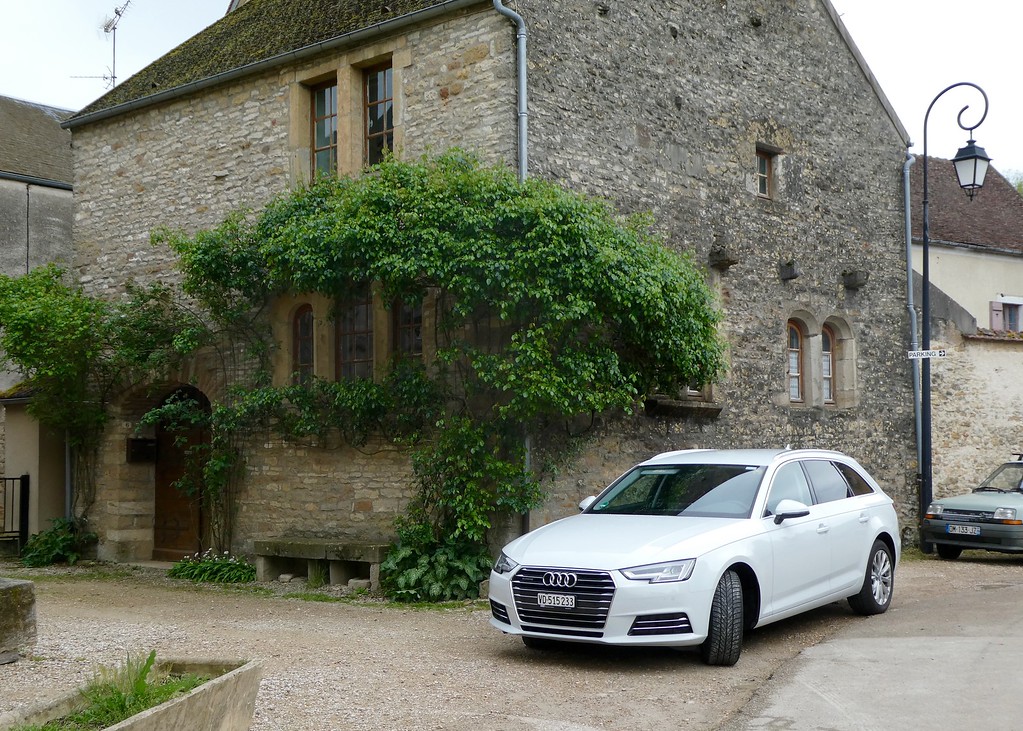 We programmed the GPS to avoid toll roads (something France is really good at having all over the place) and enjoyed a not-so-rainy drive into the heart of Burgundy.

A little over four hours later we arrived in Alise-Sainte-Reine, home of MuséoParc Alésia, a large and pleasant museum and archeological park just outside of the town limits. The focus of this museum is the battle between the Gauls and Julius Caesar in 52 BC, considered by some to be Caesar’s greatest military achievement. I had some previous interest in this event, as I had listened to the Celtic Holocaust podcast from Dan Carlin (long, but very engaging), where he went into great depth about the battle itself and the events that led up to it. The museum (with audio guide) did a wonderful job of illustrating the events that took place before and during the siege of Alésia and we spent quite some time studying the various displays.

By the time we had finished our tour of the museum the rain was falling in earnest and daylight was fading. We were advised when we bought our tickets that we would not have time to explore both the museum and the archeological site, so the cashier was kind enough to write a note on our tickets so that we could come back and continue our visit the next day. With no pressure to stay in Alise-Sainte-Reine any longer, we made our way to Corbigny where our B&B was located. With a few stops along the way, of course!

Shortly after leaving Alise-Sainte-Reine we passed through Semur-en-Auxois. I wish that I had remembered the name of the town later, as it looked like a fascinating place to explore. They were busy preparing the town for a medieval festival and it looked like it was going to be huge!

Eglise Notre Dame in Saint-Père, constructed from the 12th to 15th century

I had reserved a room at La Parrière via AirBnB, not really sure where we should base our travels but hoping that this would be ok. It turned out to be a very good location and our hostess (Corinne) was fantastic. It was actually a pleasure to have a reservation via AirBnB that had an actual host and not just a “I’ll leave the key under the mat for you” feeling. I had chosen this B&B partially from the photos that had been posted and I was not disappointed. The layout and decor was unique and interesting, just like I like it.

Cozy sitting area – and we got to enjoy the fireplace

There was a lot of discussion among our hostess, her son, his girlfriend and us about our plans and thoughts for the weekend – starting with dinner. It was already well after seven o’clock and there was great concern that the local restaurants would be full. Corinne was considerate enough to call a couple of places to inquire, learning that two of them were full, but was able to make a reservation at a third location.

Dan and I made the short walk to Restaurant le Cépage for a late-night meal. The meal itself was good, with my first try of escargot (not bad!) and my first honey-filled crème brûlée (not good!). It had been a long day and it felt good to climb into bed that night.