It was hot again in Basel.

Months ago I had made plans to take a four day weekend and the time had finally arrived. My initial choice of visiting the Provence region of France was quickly abandoned when I realized that it would be just as hot – if not hotter – in the southern reaches of our neighboring country. I would give up fields of lavender in exchange for a cool breeze and maybe even some rain. The closest chance of this was the Atlantic coast.

Thursday was forecasted to be hot, and Friday even hotter. Dan and I faced an eight-plus hour motorcycle ride across the northern motorways in temperatures that were estimated to remain in mid- to high 30s (90+ F) the entire time. Wanting a chance of enjoying ourselves, we decided to ditch the motorcycles and rent a car. Air conditioning FTW!

The rental car process should have given me a clue as to how the rest of the weekend would go. Cars reserved via an online form had a two hour delay before pick up, so I chose a time two hours away. We spent ten minutes just trying to get the online reservation form filled out and by the time we hit “Submit!” our two hour window was gone and we had to go back to beginning and select a later reservation time.

Confirmation and luggage in hand, we took the bus to the airport to pick up our car. I approached the counter and told the woman working there that we had reserved a car while Dan pulled up our confirmation number on his phone. She checked her system and gave us a critical look.

“When did you make the reservation?”
“Two hours ago.” (we knew that all too well)
“It’s not in our system.”
“Well, we have the confirmation number.”
“Just because you have a confirmation number does not mean that we have a car.”
????

She eventually found us a car, a clean Skoda Rapid “Spaceback”, and asked if we were ok with an automatic shift. Normally there is an extra charge to have an automatic, but I was disappointed with the option. I don’t drive much, but when I do, I want to drive! Realizing that saying “No” to the automatic probably meant more time and hassle, I agreed to it and we loaded the car with our bags and snacks. We set the GPS for “Reims, France” and took off down the motorway. It was not even noon and the temperature was 34C with an unrelenting sun. We turned on the air conditioning and settled in for a long drive.

The car wasn’t bad. I didn’t have much leg room and there was little adjustability in the lumbar support options, but it handled fine. I inspected the many knobs and gadgets that surrounded the driver’s cockpit and was surprised that there was no cruise control. I normally don’t use this feature except on long drives, and today would be a long drive.

Four hours later we reached Reims and found the store we were looking for. We were in the market for some specialized camping chairs and this was one of two stores in all of France that carried the manufacturer we like. The chairs were on sale and out of stock. The helpful associate offered to order them in for me and I could pick them up next week. No thanks; there was no way I was driving back here again! We got back into the car and continued west. The view out of the windows changed little throughout the day: lots of farms, a few forests and even fewer towns. While pleasant to look at it, it was far from interesting.

Seven hours into the eight hour trip I found the cruise control.

It was 8:15 when we pulled into the campground in Quiberville but the office had closed at 8:00. We drove around the campground and selected an empty spot, figuring that there wouldn’t be any one else coming to kick us out. We met our camping neighbor, Hans, who was returning home to Amsterdam on his bicycle. We discussed his route and what it was like to ride a bicycle through France. He gave us a recommendation to visit the town of Portbail on our travels, commenting on the extreme tides, the view of Jersey (if the day was clear) and his friend’s bar. After setting up our tent we wandered over to the stony beach and then checked out the town. There wasn’t much to see and what we did see wasn’t holding our attention. There was a sad looking circus set up in a field with no one in sight, save a couple of horses and ponies munching on the grass, while the music played from inside. The plan to stay here for two nights was looking dismal. 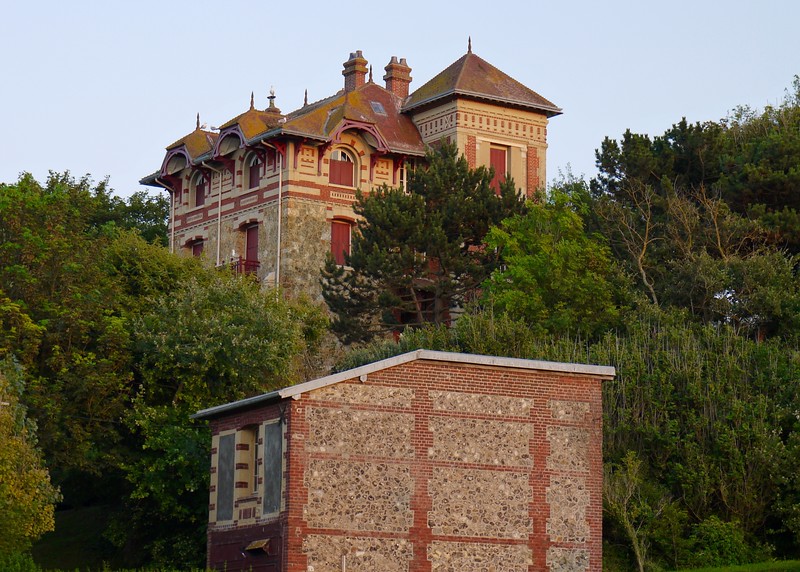 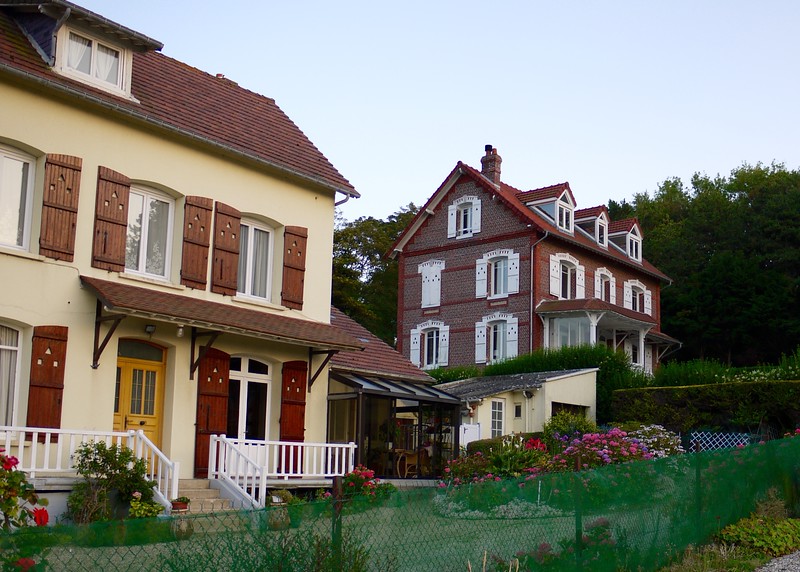 The circus has come to town

After a terrible night’s sleep, I greeted Friday morning with pleasure. I was unable to get comfortable and I spent the night tossing and turning in my sleeping bag. The noise from the circus didn’t help, nor did the barking dog. I was all too happy to get out of the tent and get the day started. We packed up our gear, paid for our campsite and headed out along the coast. We didn’t have a plan, but that didn’t mean that we didn’t need our GPS. Unfortunately for us, we brought the wrong adapter cable and couldn’t plug it directly into the car’s USB power port. Instead, we used our portable battery pack and through a convoluted series of cables and wires, Dan managed to make things work – barely.

The coastal roads, like most coastal roads, were slow. There were frequent but beautiful Norman towns and villages, each one seemingly trying to outdo each other with blooming bushes and displays of flowers. The hydrangeas were the most impressive, with colors that included white, red, blue, purple and shades in between. This, in stark contrast with austere grey stones of the buildings, made for a pleasant scene in each town. We stopped at a boulangerie in Sotteville-sur-Mer for some breakfast pastries and enjoyed them while walking through the town. I loved looking at the intricate combination of bricks and stones used in construction. So many variations of texture and color to be enjoyed! 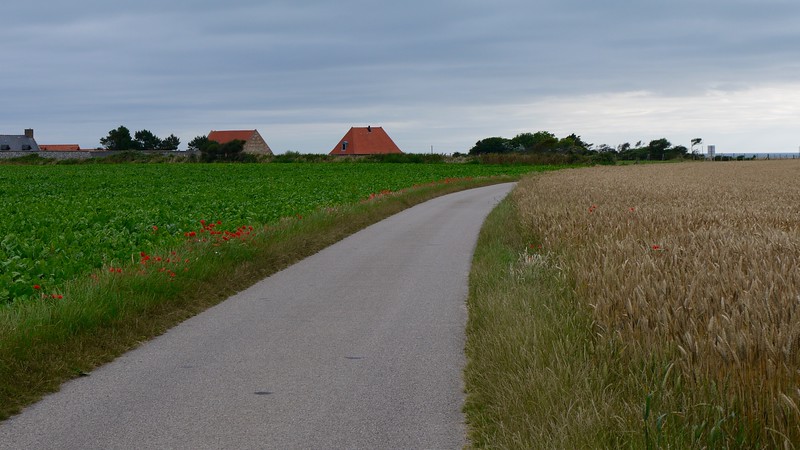 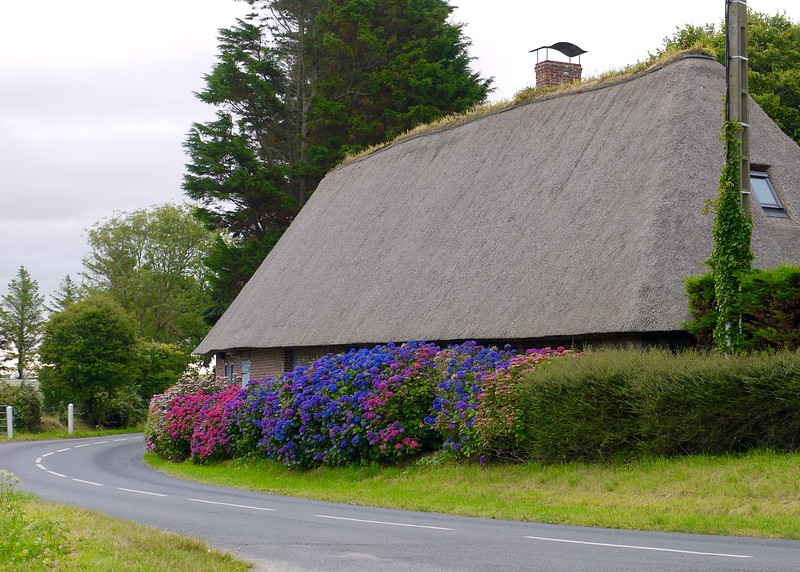 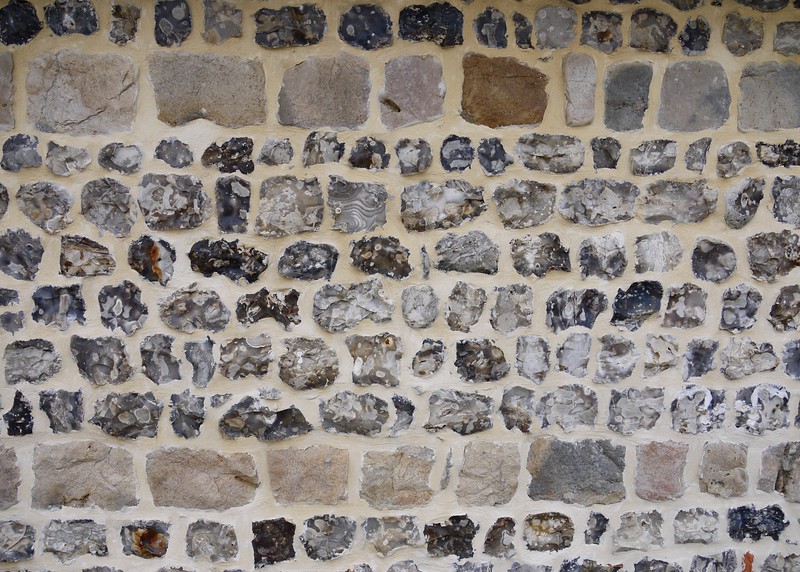 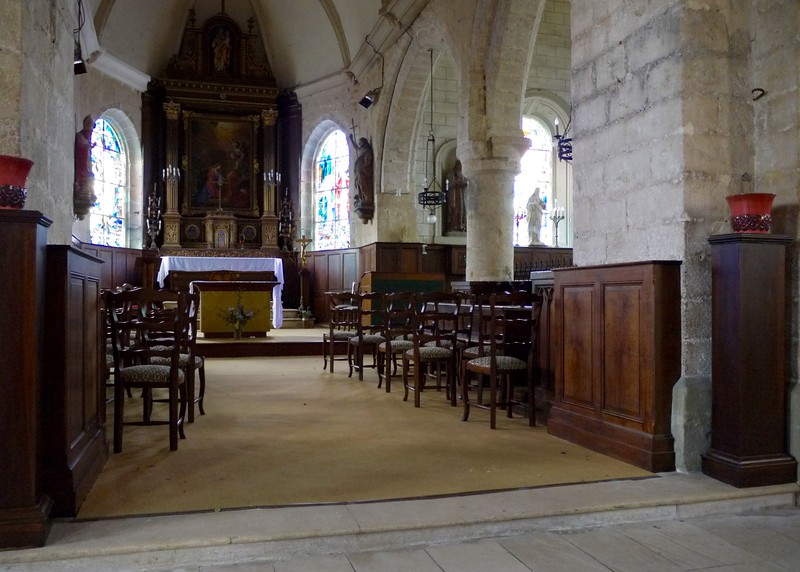 Inside the town church of Sotteville-sur-Mer

We finally realized that we weren’t getting anywhere by sticking to the coast. Dan had expressed visiting one of the famous WWII beaches along the coast and set the GPS to take us to Utah Beach. We went inland, coursing through some crazy small country lanes before finally getting out to the faster motorways. The day was overcast and cool, with temperatures barely reaching the mid-20s. This was much more to our liking and we basked in the glory of the cool(er) air and the fresh breeze. 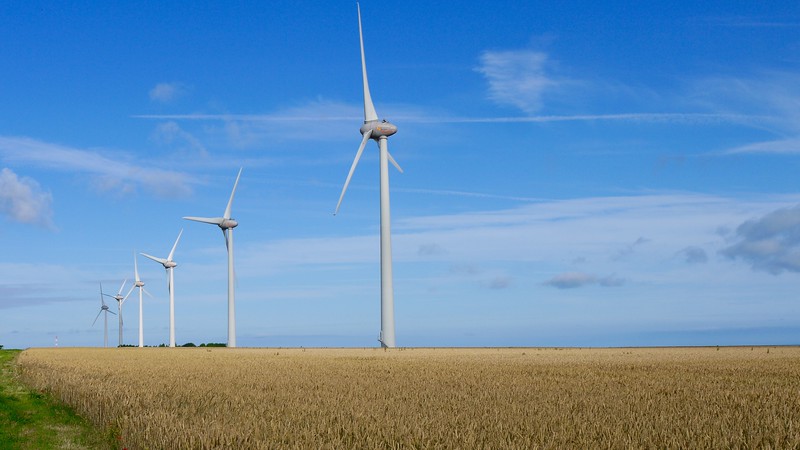 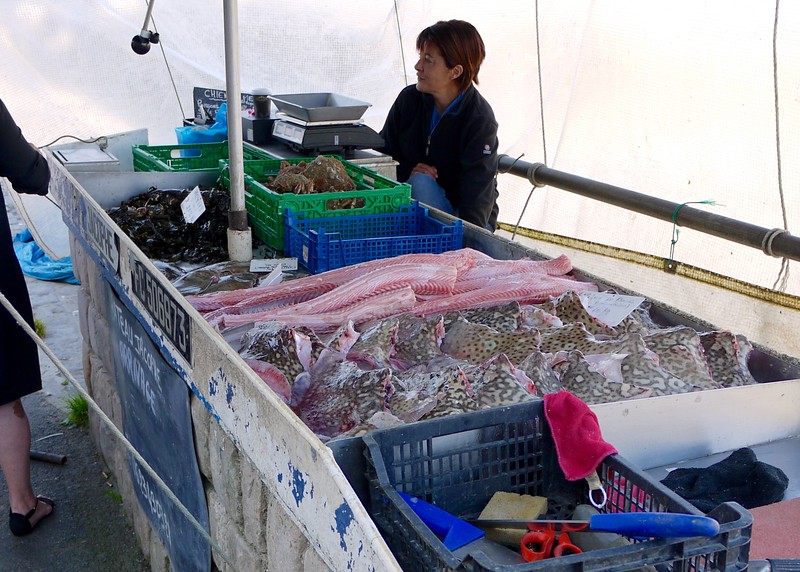 Utah beach. Dan and I both have a passing interest in WWI and WWII, so the idea of seeing one of the famous D-Day landing beaches interested us. We parked the car in the visitor’s lot and walked to the beach. I was expecting high cliffs and concrete bunkers, but instead I saw flowing grasses and soft sand. It still looked like a horrible place to fight a battle. We didn’t wait in line to enter the museum but instead agreed that we’d investigate some WWII documentaries and films when we got home. 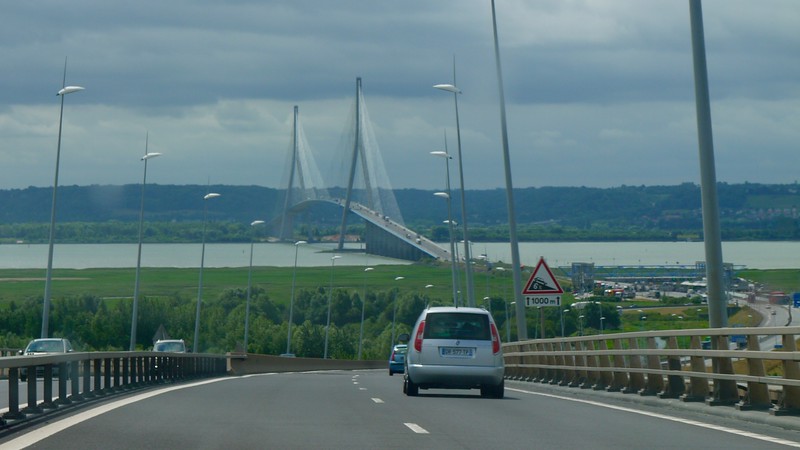 The Memorial from the beach

From Utah Beach we headed directly for Portbail. Or we would have, if the GPS didn’t keep dying. Dan struggled valiantly with the cables and the batteries and dim screen, trying to direct me on the right roads. I soon discovered that I didn’t like the Skoda. While it had decent acceleration if I was already moving, there was an awkward transition when beginning from a stop. The car either jerked harshly forward as the motor engaged, or if I tried to be gentle on the accelerator then there was a long delay before anything kicked in. This delay was also apparent when switching between Drive/Reverse. It was frustrating and I longed for a manual shift car.

We reached the small port town of Portbail and parked the car. Hans’ friend’s bar was in the next town, but I wanted to get out and stretch my legs, as well as check out the marina full of beached boats. The extreme tides might not equal the tides of Nova Scotia, but they weren’t anything to dismiss. Powerboats listed on their bellies while sailboats perched precariously on their keels, wedged into the soft mud deep enough to stand the hulls upright. It didn’t look safe, but apparently it worked well enough for people to keep their boats here. It was unfortunate that we didn’t come back later to see the harbor full of water. But on the other hand, anyone can find pictures of a harbor full of water. 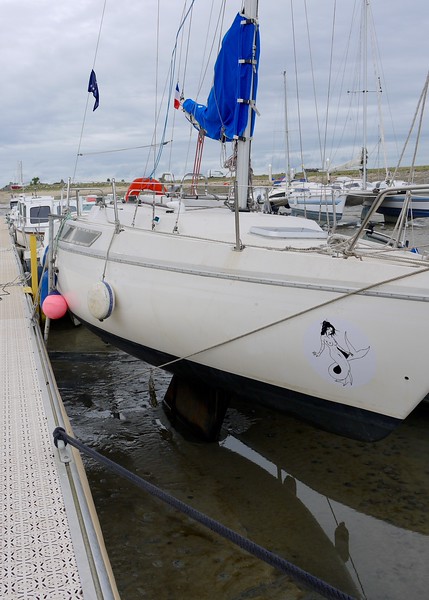 How can this be good for the boat?

We eventually returned to the car and left the town limits to look for a Han’s friend’s bar and a campsite. I was tired and grumpy, and Dan was frustrated and grumpy. The bar had a menu, but it was beach food, nothing that we were looking for. We stopped at the campground at the end of the road but it was full, sending Dan into a panic that we wouldn’t find anything on a Friday night. Fortunately our next stop was at Camping L’Espérance, which was successful by having free space as well as being a very nice and clean campground. Our mood changes almost immediately and we happily set up our tent and then made the drive back into Portbail for a good dinner. 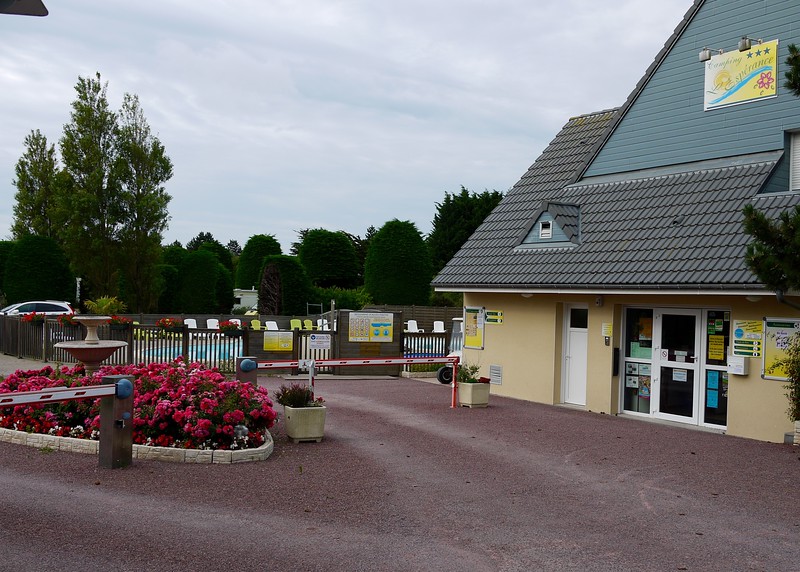 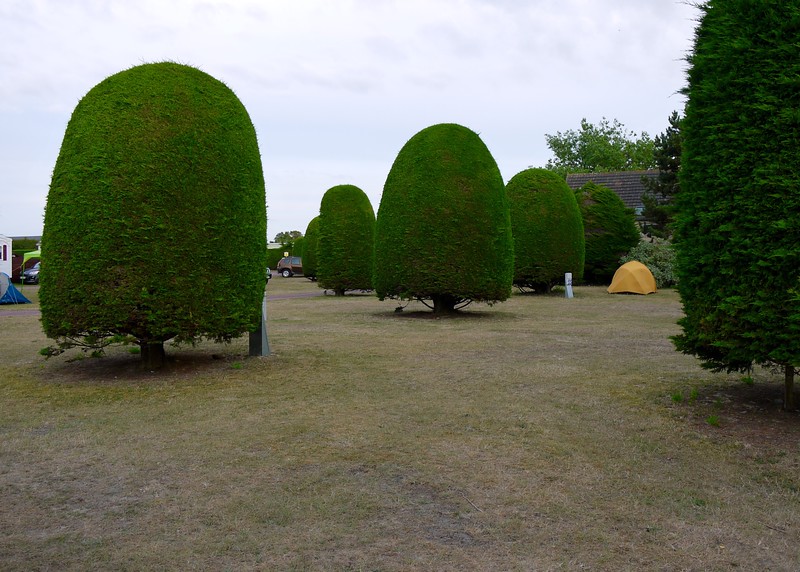 Dan chose Au rendez-vous des pecheurs (“Meeting place of the fisherman” – or something like that). They weren’t ready to serve dinner yet (darn late eaters, those French!) so we took a walking tour of the town to pass the time. When our reservation was ready, we were lead upstairs to a cozy table by the window. The room was small; there were maybe twenty tables in all, with about three of them with customers as we sat down. Our meal was fantastic. I had a local fish while Dan had a pot of mussels. We both enjoyed our meals and were just sitting back to relax when the circus came to town. Ok, maybe not the circus, but at least twenty people rushed up the stairs, more than half of them children. They filled in the seats at a long table, calling and yelling out in English (UK) to each other the entire time. I assumed that things would quiet down once everyone found their seat, but no, the noise level never dipped. The other restaurant patrons asked the waitress to be moved to another area of the restaurant but there were no other seats available. We quickly asked for our bill so we could leave as soon as possible. Only as we were heading for the stairs did I finally hear one of the adults hush the kids and the noise level subsided. I was still glad to be leaving.

Portbail from across the tidal bed 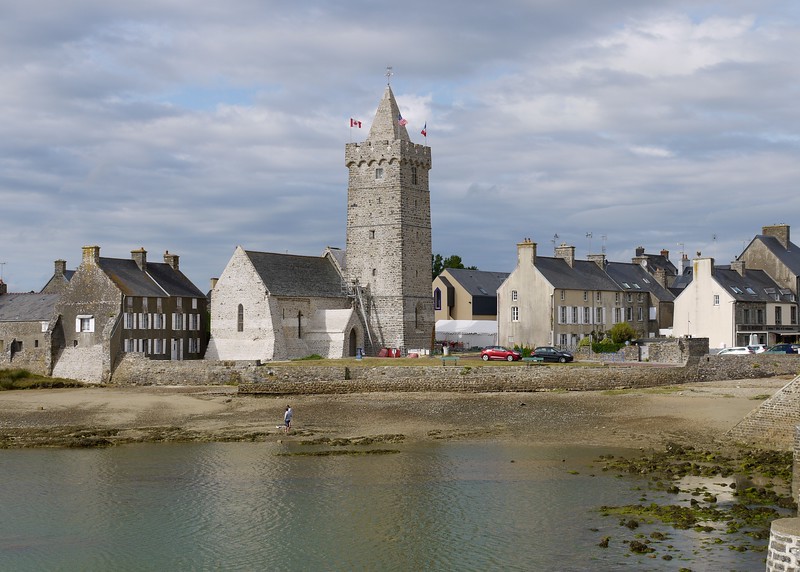 I love the Norman churches

Inside the church (it is an art gallery now) 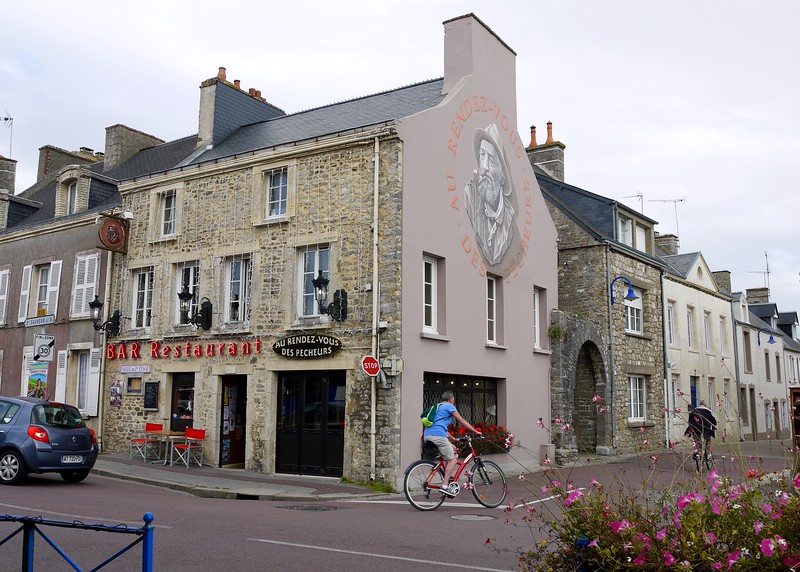 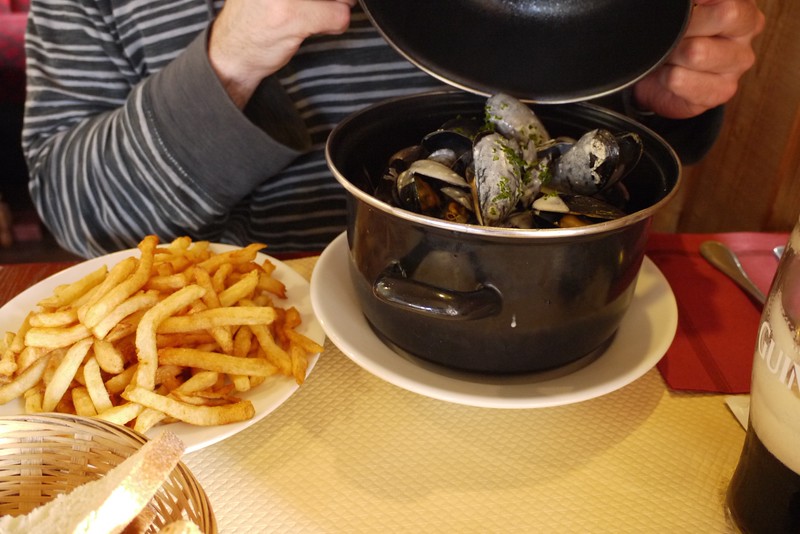 Once back at the campsite we kicked back (sans chairs) with our books until it was time to walk to the beach and watch the sunset. It was a quiet evening and cooler, but I still couldn’t sleep comfortably and I once again was glad to get up.