The allure of Locarno is that it is warmer and sunnier than Basel. Normally I’m not a fan of “warmer and sunnier”, but when you’re talking about early winter weather, then this is my preferred forecast. Today we would make another attempt at reaching one of those side valleys, but instead of riding the bicycles, we’d drive there and bring the bikes with us.

The valley in question is the Valle Verzosca, a rather famous valley known for multiple things including the famous bungee-jumping dam from GoldenEye and the Ponte dei salti stone bridge. I had been wanting to explore this valley for years and was excited to finally get here.

The drive was fast and easy, and the dam not too far above the nearest town. We parked and took fifteen minutes or so to walk across the dam and back. It was really great to be here in the off season if only for the lack of people. Of course, Covid restrictions had a lot to do with this as well. I was still feeling a little guilty for having a “holiday” in the middle of a global pandemic, but I continued to justify it with staying in our own country and making the best use of outdoor activities.

The Contra Dam, as it is formally called

I love the spillways! 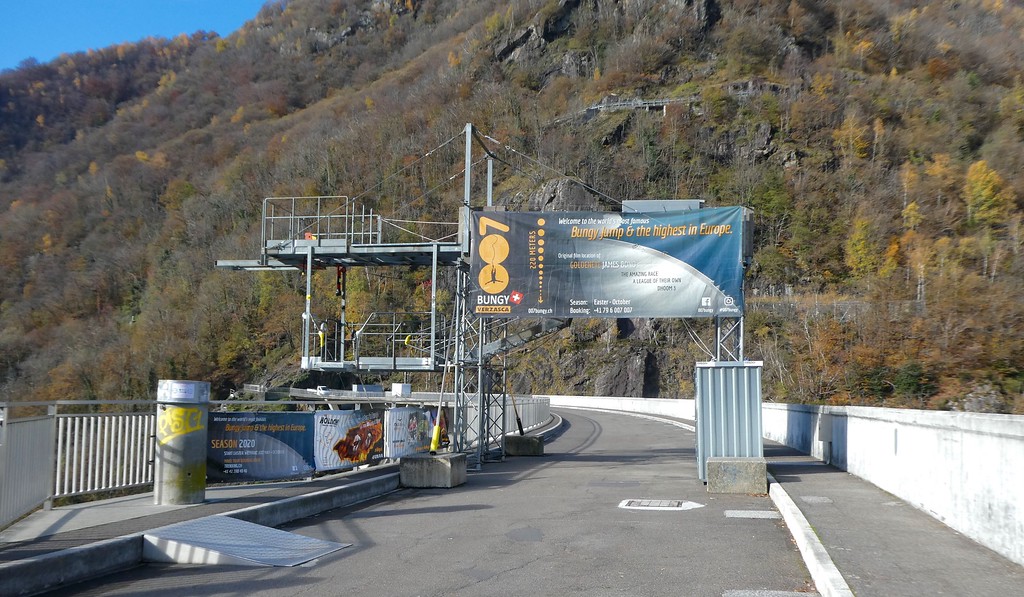 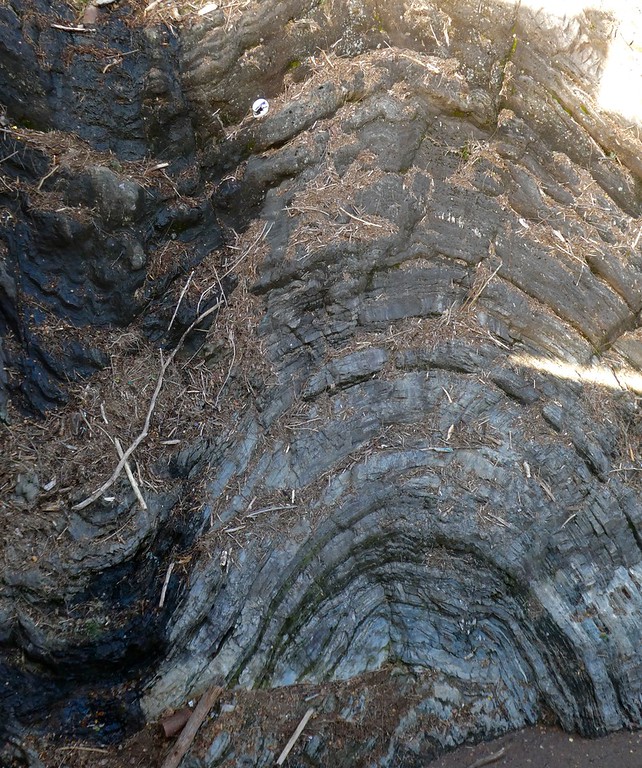 Having walked from one end to the other, there wasn’t much else to do. And no, I have no interest in bungee-jumping, even if someone was there to take my money. We popped back into the car and continued to drive up the valley. We drove until we reached Lavertezzo, at which point we parked the car again to explore on foot. We had reached the location of the “Ponte dei salti” (jump bridge) and the magical waters the flow beneath it.

A diver in the water below 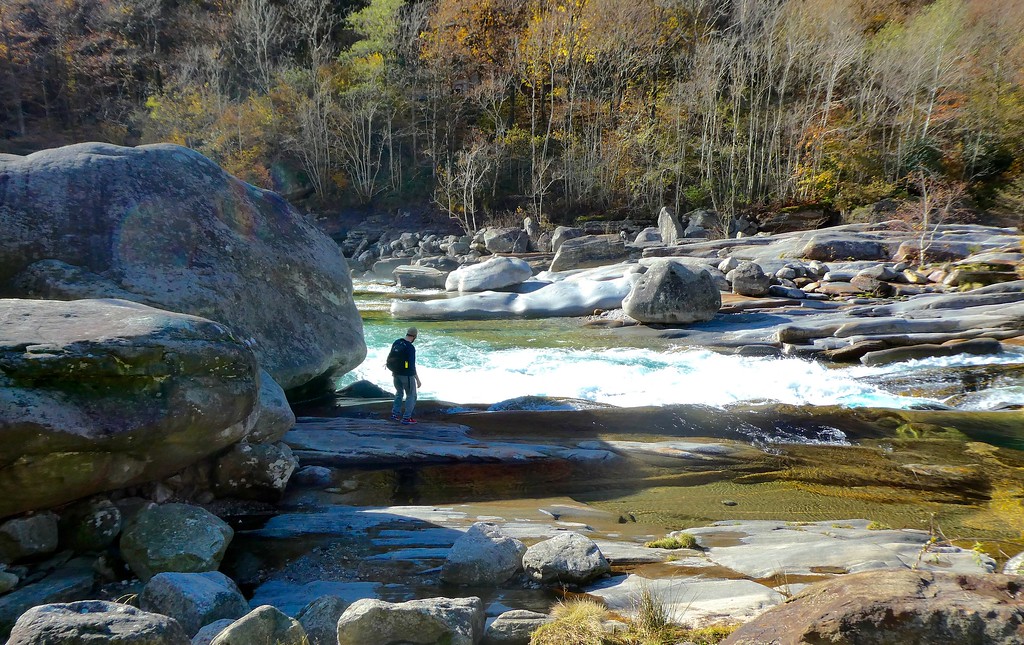 There were a lot more people here than we’d seen anywhere else in the last couple of days. The parking areas were small and full and it was only through chance that we found some place for our car. I honestly can’t imagine this area during a normal tourist season. It was gorgeous though, and it was obvious why so many people felt drawn to explore the region. 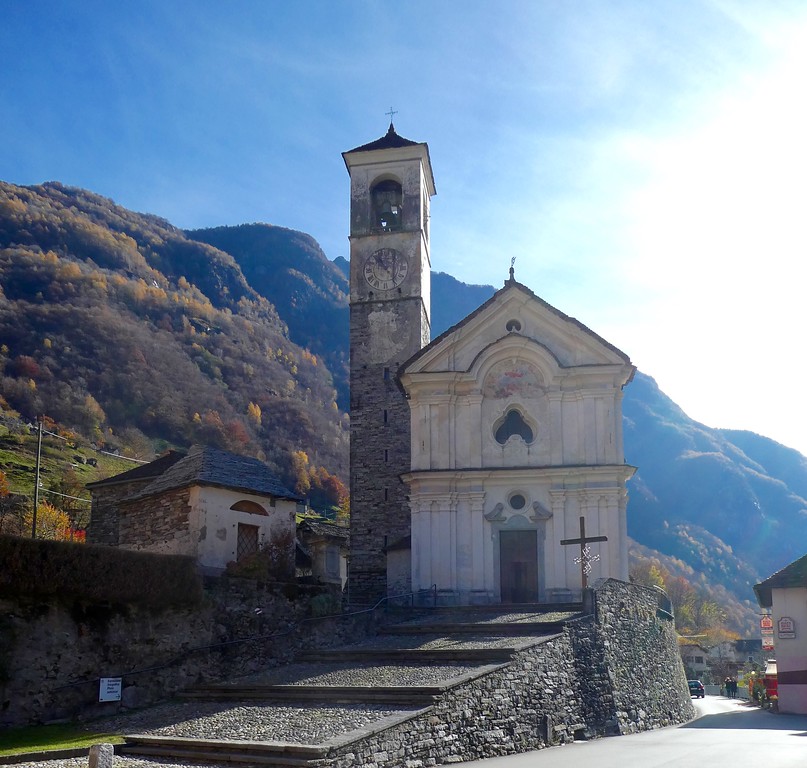 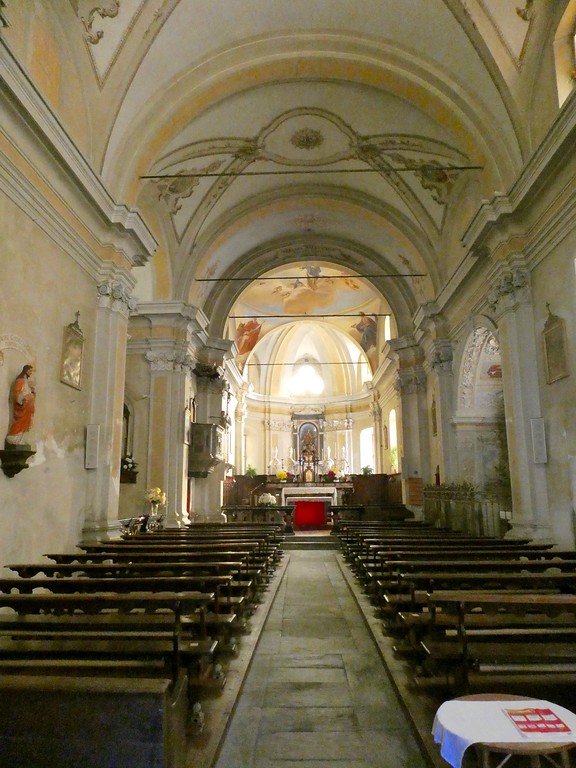 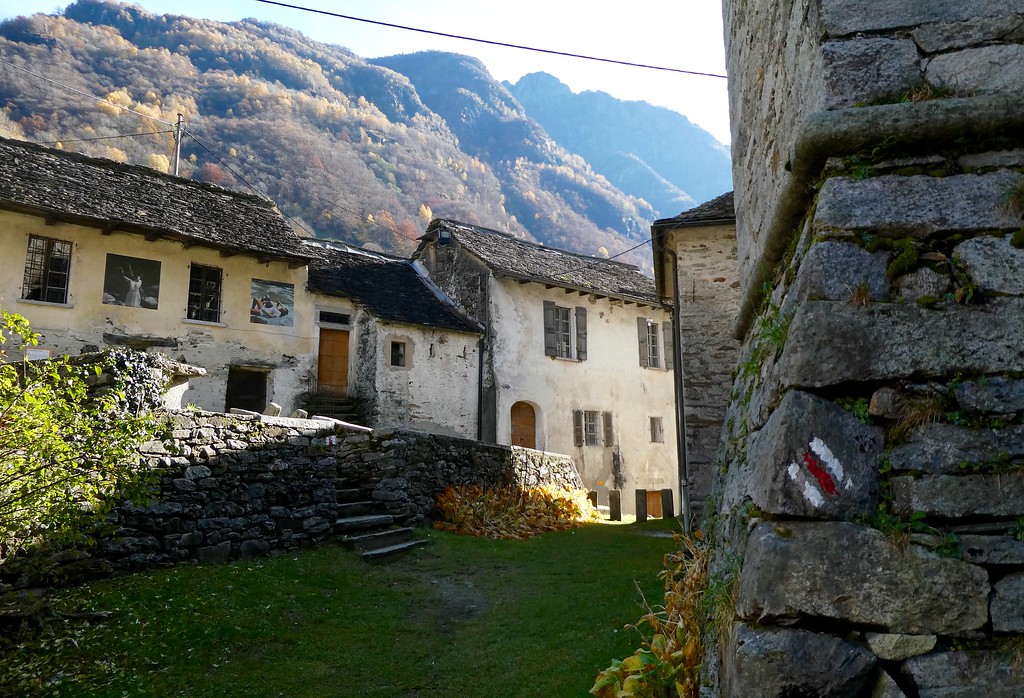 Without spending a full day here, there wasn’t really the chance to completely appreciate the river and its environs. We also had other plans: to go further up the valley and get on the bikes for a more detailed and leisurely appreciation.

While I had read about bike trails through the valley, I wasn’t quite sure how to access them, or from where. So we continued to drive along until we finally saw a very obvious point where we could get our bikes off the car and onto a trail. It was the tiny village of Gerra 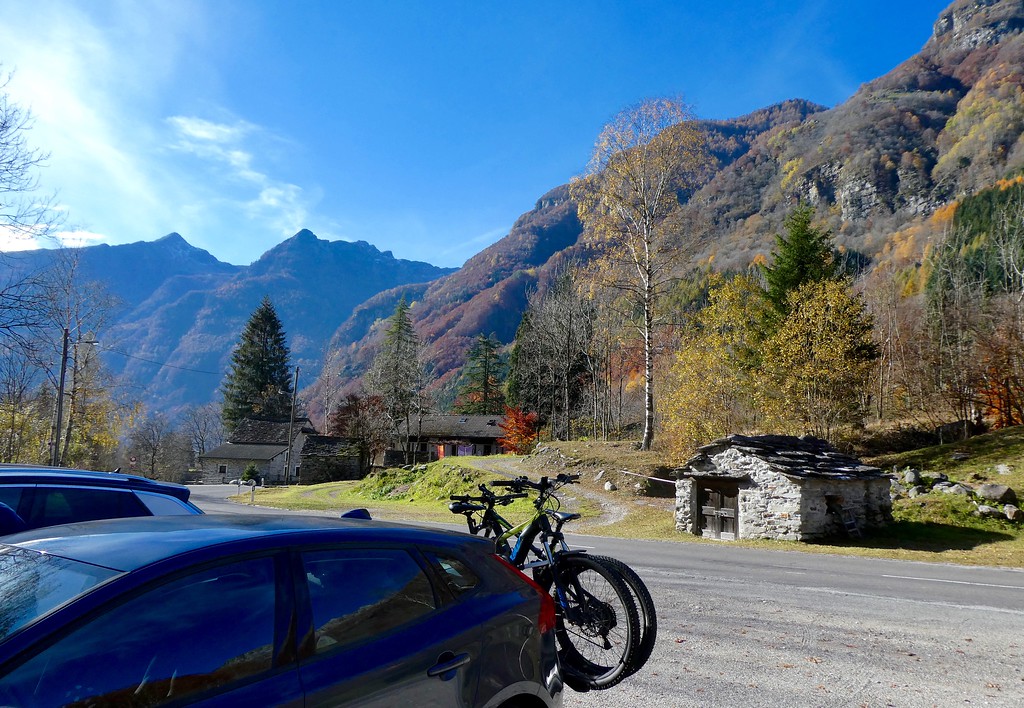 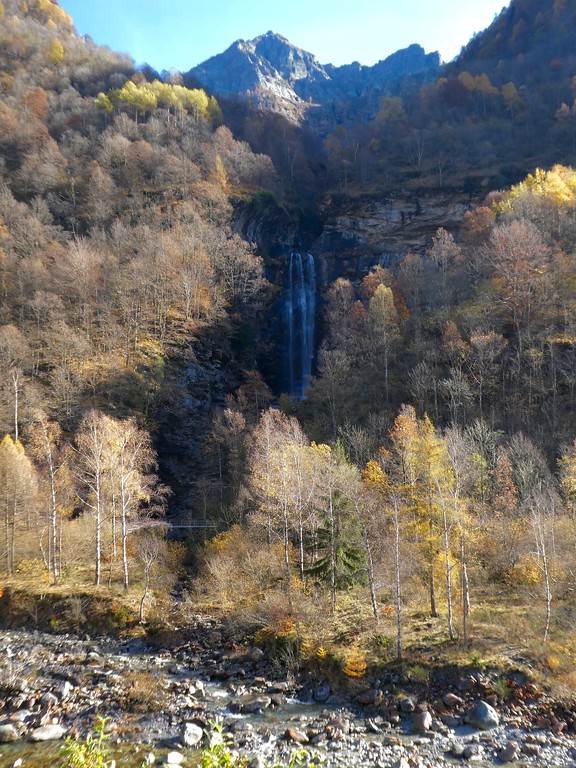 I had a new e-bike and I was excited to see how well it handled the trails and elevation changes. I’m not a very experience cyclist, generally only commuting to work and running errands in the city. Trail riding is new to me and I was slightly concerned about adapting to the varied surfaces.

Starting out up the valley 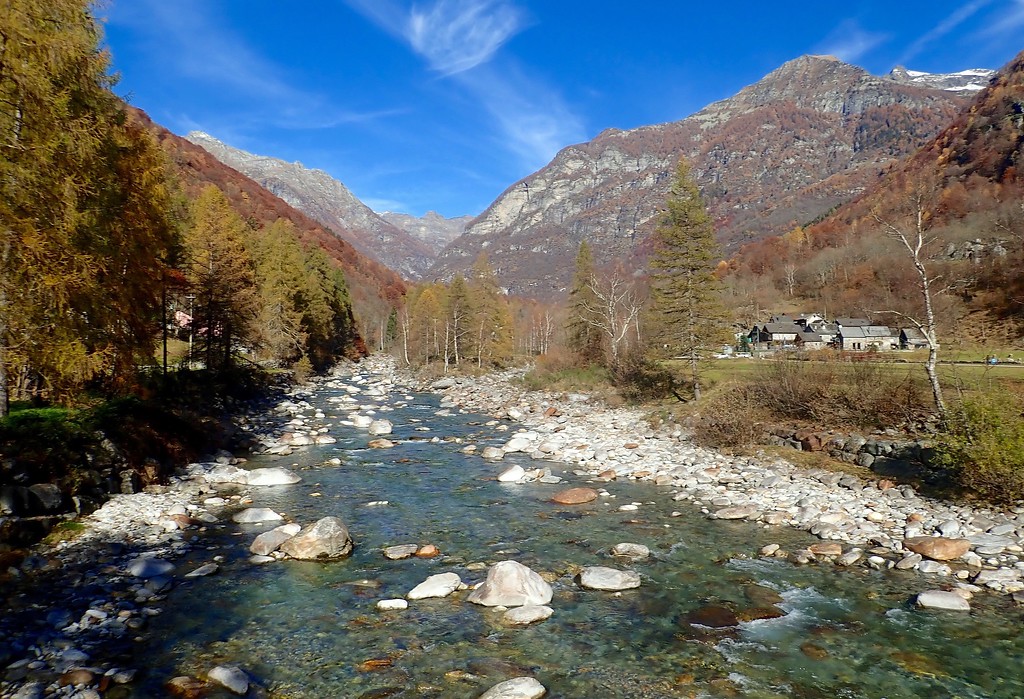 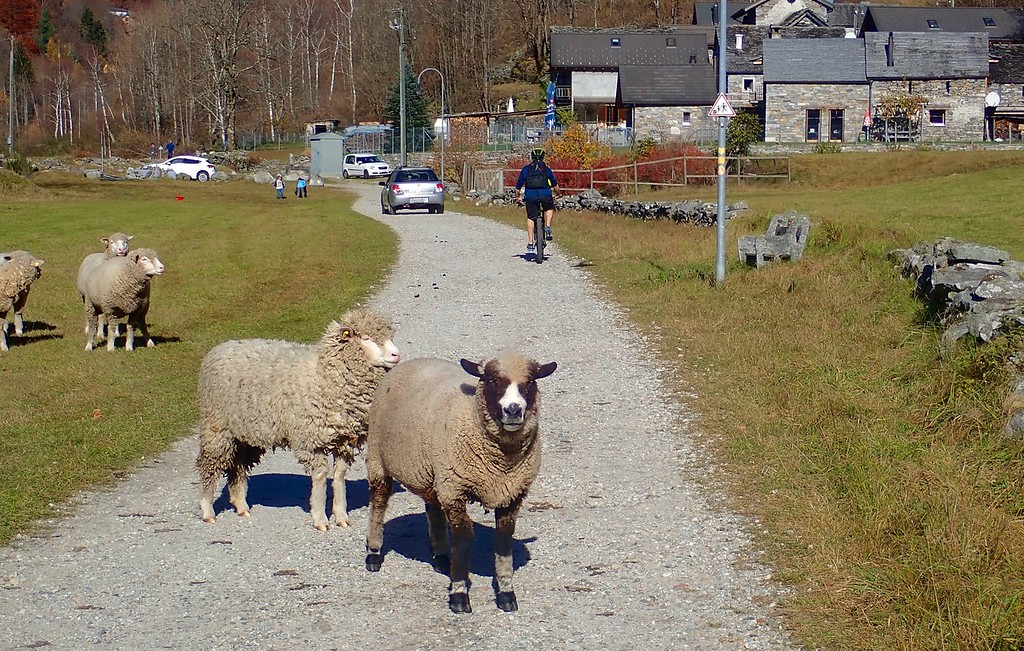 Following Dan on his standard mountain bike – poor guy had to work! 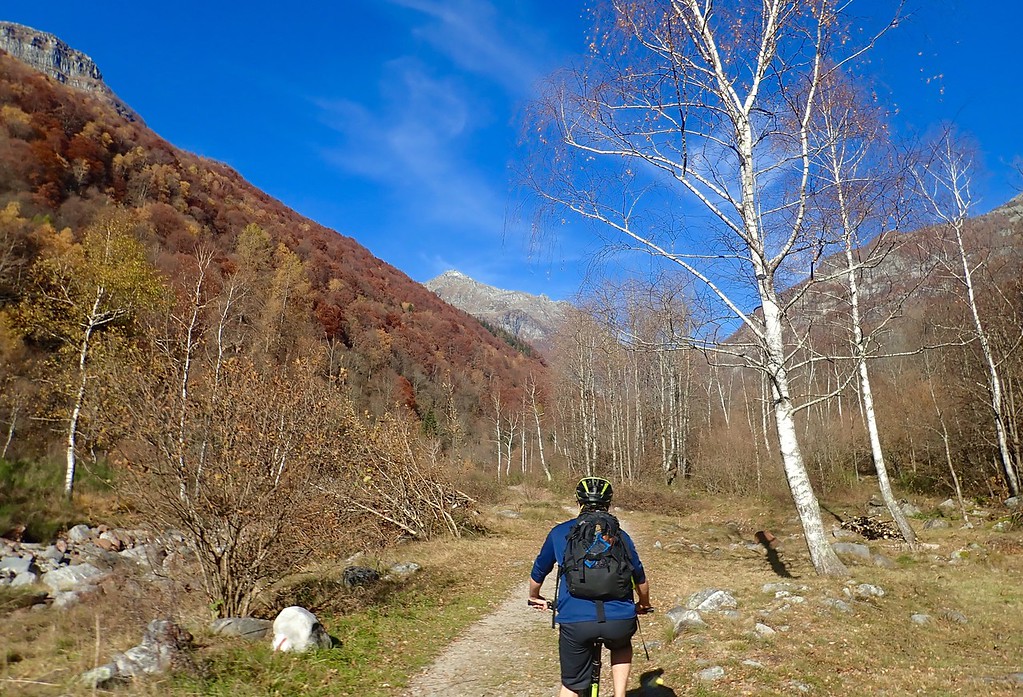 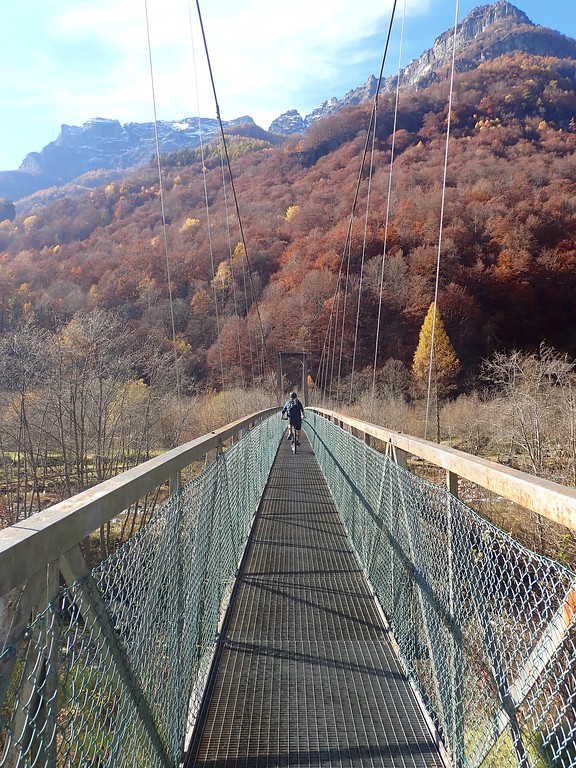 The cycling was quite easy. The trail was generally in great shape and the elevation gains and losses were infrequent and small. Dan mentioned that it was a bit of work to cycle on his standard bicycle, but I know that he enjoys such things. 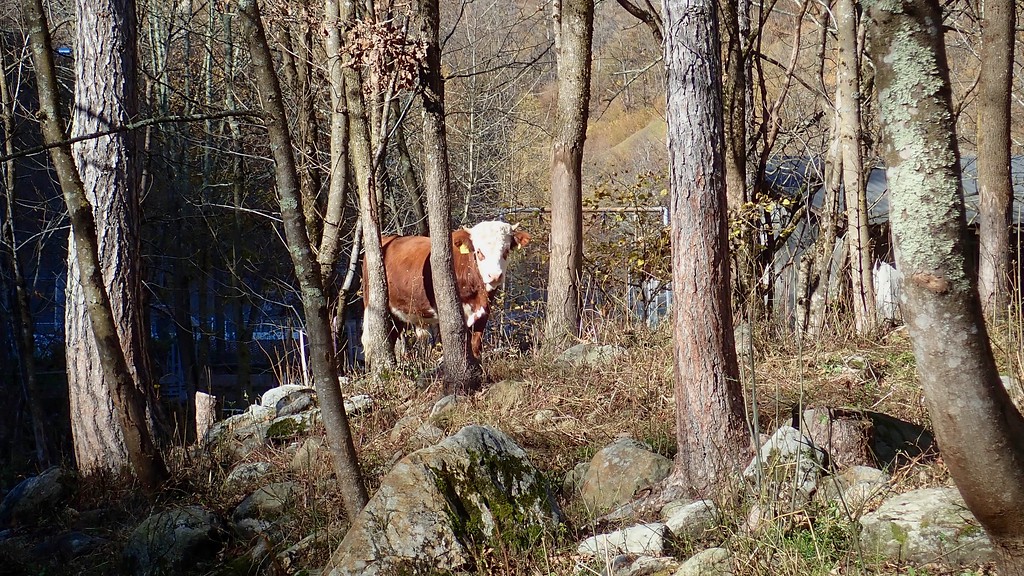 The trail crosses the dry river bed; we walked the bikes here

Most scenic hockey rink ever!

We had reached the village of Sonogno and decided to stop here to look around and eat our lunch. We hadn’t been cycling for that long, but with the time of day we knew that we wouldn’t be able to go further up the valley without pushing our luck with a stress-free return to the car. Not to mention the stress of driving down the twisting valley road in the dark. No, I preferred to cut our exploration short and just come back another time.

Lunch at the fountain

I love the building style of Ticino villages 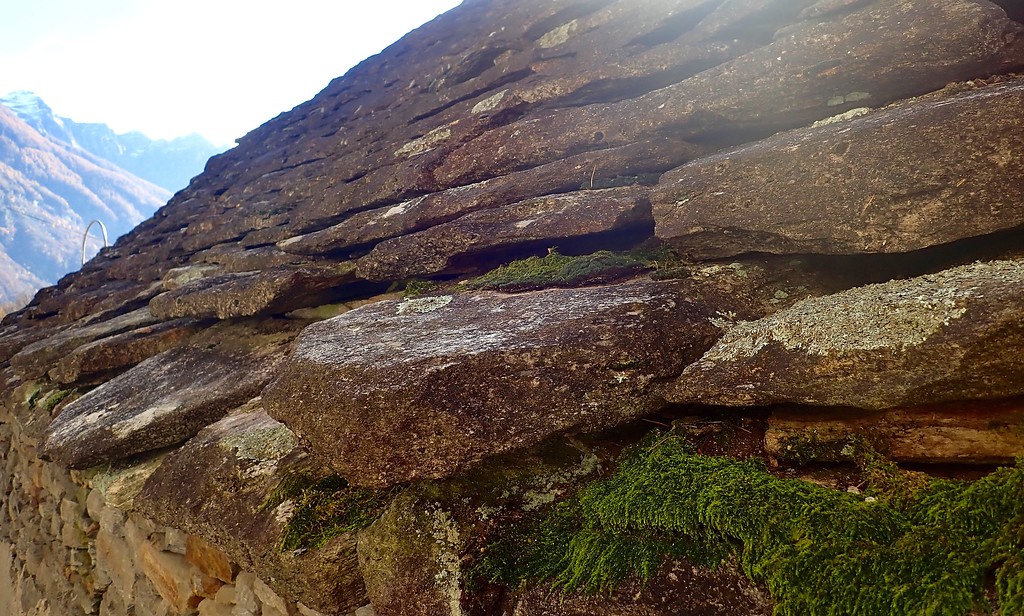 This was a beautiful valley and I would love the chance to come back and follow it further into the mountains. Even so, I felt like we barely scratched the surface with what we saw. But now it was time to make our way back.

I should mention that when I woke up, my shoulder had not returned to normal, but instead was quite sore and the range of mobility wasn’t quite there. This was another reason for cutting the day a bit short: my shoulder was aching a bit and I didn’t want to push it. This would clearly take some time to heal.

Dan shoots me crossing one of the trail bridges

My view while crossing that bridge 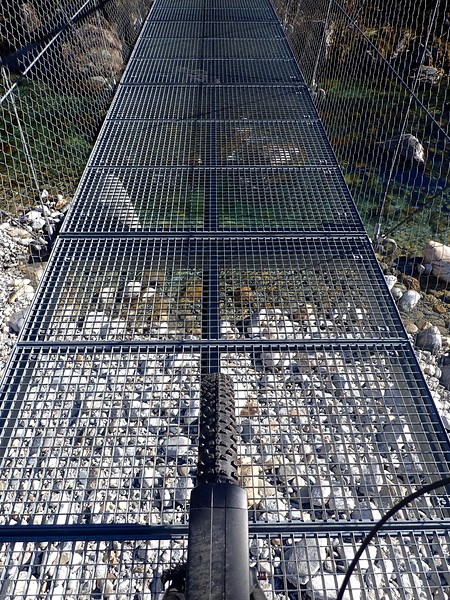 The sun casting shadows from behind the mountains 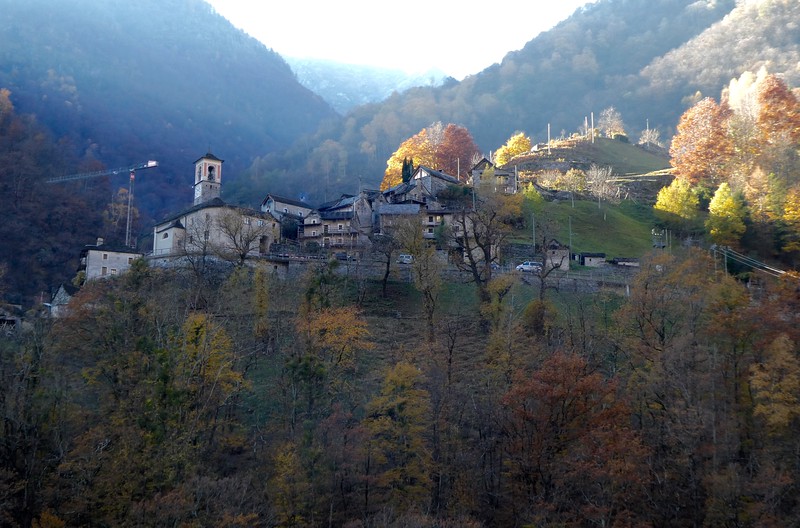 The ride back to the car was uneventful, and the drive back to Locarno didn’t take long at all. We were back at the hotel to drop off the bikes and chill for a bit. We had one more full day in Locarno and wanted to sort out what would be the best use of our time here. I was hesitant to hike again – the knee felt fine but now I was gun-shy about it – and my shoulder was causing me concern about how much I could push it without causing any further injury. While we discussed this, we went off to walk along the waterfront and eventually find dinner. 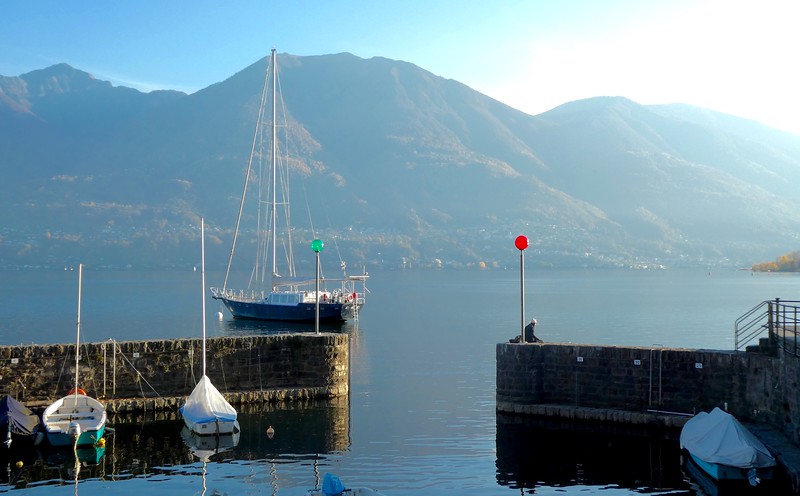