Klettersteig is more commonly known as via Feretta (“iron path”): protected climbing routes with fixed iron rings and rungs. For me, it was all of the joy of mountain climbing without any of the fuss of ropes and patient partners!

We drove the car north an easy 15 kilometers north to Monte Crasso and parked near the tiny cable car office. There weren’t many cars around, but there were a dozen or so people in line already. Someone people left the ticket counter looking discouraged, and some just walked off down the street. Only a few hung around the parking area. When it was our turn to approach the counter, we found out why: the gondolas were tiny so space was limited. The ticket seller was letting people know how long they’d have to wait until it was their turn to board. Some found the wait too long and left. Others took advantage of the time to stroll around. The wait was only about 40 minutes, so we would use the time to just hang out and people watch.

Views across the valley as we ascend

The gondola was packed, which I found surprising due to Covid precautions. We of course all wore our face masks, but it still made me a little uncomfortable and I was glad to disembark once we reached Grotto Morena, the little restaurant at the end of the ride.

I had done my research before we even left Basel, so I knew roughly what to expect. We found the trail that would lead us to the start of the climb. Even without the climb to look forward to, it was a pleasant day in the mountains.

The website had given me a pretty good description of this climb. While Dan is an avid mountain climber, I have only done one via Ferrata before, and it was one of the easiest ones in the area. The website had photos of little kids climbing the route so hey, how hard could it be?

We put on our harnesses, helmets, and gloves, and took our carabiners in hand. The idea behind the via Feratta is that you don’t need a climbing rope because you are always clipped into a secured cable or rung. As there are two carabiners, one stays attached to the cable while the other one is moved to the other side of the fixed point. If one were to fall, the carabiners would hold and the energy absorbing leash would slowly tear, breaking your fall.

Dan demonstrates the via Feratta set up

The climb isn’t just going from rung to rung though. Those have been installed for sheer areas where there is no other footing. But often you still need to tread carefully and use the natural rock features.

I was often glad of the rungs though

Sometimes there were just these little foot pegs

A difficult section to traverse

The proper way to use the carabiners: the openings face opposite directions when moving from one side of the cable post to the other

As noted in the route map, at one point there is a split. One side is “difficult”, and the other “medium”. I was quite happy with my “medium” level, but Dan was up for more of a challenge. While I wasn’t too keen on us splitting up (safety in numbers, after all), I didn’t want to hold him back. So far the climb had been ok, so I agreed to just meet him at the top. Divide and conquer it would be!

Did I mention the great scenery?

No sooner had Dan headed off on his route then I was faced with my own. And it was more difficult than what we had already covered. But it wasn’t impossible, so I just took my time. I have no fear of heights, so the overhangs weren’t a problem. I was, however, concerned about my own strength in being able to leverage myself up on some of these more difficult ascents. Oh well – no turning back now!

Shortly after this, I was taking a break and noticed a pair of climbers approaching. While I was ready to proceed, I could see that they were faster than I, and this was a really good place to let them pass, so I stayed in place and greeted them as they took the lead. 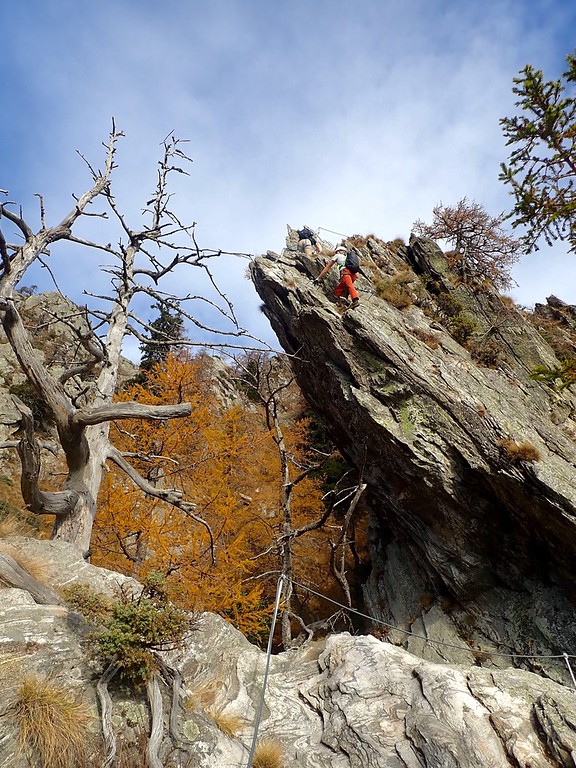 At one point I was stuck. There were no handy rungs or pegs, and the rock face did not inspire confidence for secure footing. I stood there for a while, staring at the rock, looking for the ideal route and rather wishing that I didn’t have to go on. But there was no choice, so I placed my foot on a tiny ledge and used my arms to take most of the weight to get me pass this section. It wasn’t good enough, and at one point my foot slipped, putting my full weight suddenly and painfully on my right shoulder. Ouch. Really ouch!

Fortunately it wasn’t anything that kept me from continuing and I forged ahead, determined to meet up with Dan.

Dan took this (highly zoomed in) photo of me

And another one shortly after

He’s there, trust me

The last stretch was tiring. Dan was content with his route and came down to meet me. Unfortunately, it was an uphill hike to get to the trailhead that would take us back down to Grotto Mornera. It was also getting late in the day, so we had to make quick work of the downhill trek.

There isn’t much to say about the return to the cable car. It was a good path, and while I was concerned about a return of my knee problems from our first hike, it went well. The forested path was getting dim, however, as the sun was making its way behind the mountains. I was all too happy to reach the restaurant and sit down to a hearty and tasty meal while we waited for the return cable car.

My shoulder was sore, but I wasn’t too concerned. After a good meal at Ristorante Osteria del Centenario, I figured that I just needed a good night’s sleep and it’d be as good as new!