Yesterday I thought it would be nice to see the Rhine Falls in Schaffhausen. Unfortunately, the weather did not cooperate and I did not feel the motivation to make the ride all the way there. However, Dan and I had made plans to go hiking today and since the weather in mountains looked pretty dismal (again), I suggested that we give the Falls a shot. We’ve been having a very wet summer so far (if you can even call it “summer”) and I figured that falls would be in their full glory.

We decided to take the train, as that would allow us to go for a short hike but not having to circle back to our starting point. Plus, the weather – although forecasted to be better than in the mountains – was still supposed to include rain. 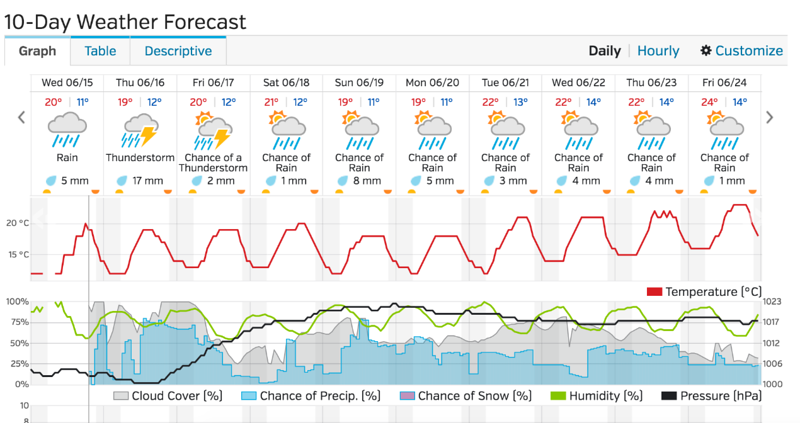 We hopped on a train east and a couple of hours later disembarked with a dozen or so other tourists at Schloss Laufen. The further east the train moved the nicer the weather looked and, by the time we were in Schaffhausen, there was a blue sky fluffy clouds above.

Ok, I figured that the Rhine Falls might be a bit of tourist destination but I didn’t expect the number of tourists and venders outside the walls of Schloss Laufen. Dan and I were quick to make our escape and headed down to the water. We first went to the rail crossing that spans the open water above the falls. 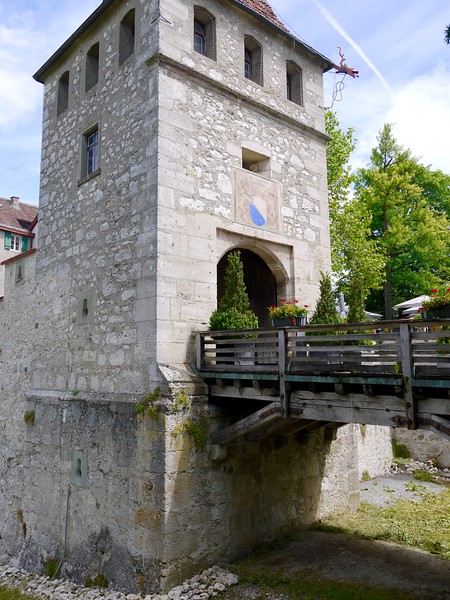 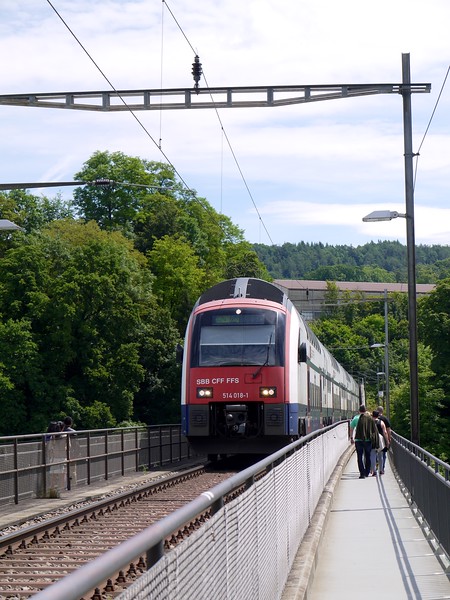 View from the downstream side of the train crossing

The water was fast and the sound was great. As I had never been here, I did not have much reference as to how much higher the water was than normal. But as I had read about recent flooding in the area, I knew that this was more than “normal”.

We continued across the bridge to the far shore, to where the popular viewing platforms were set along the banks and the many tour boats docked. I couldn’t get over how great the weather was today – such a welcome change from yesterday!

Looking back at the train crossing 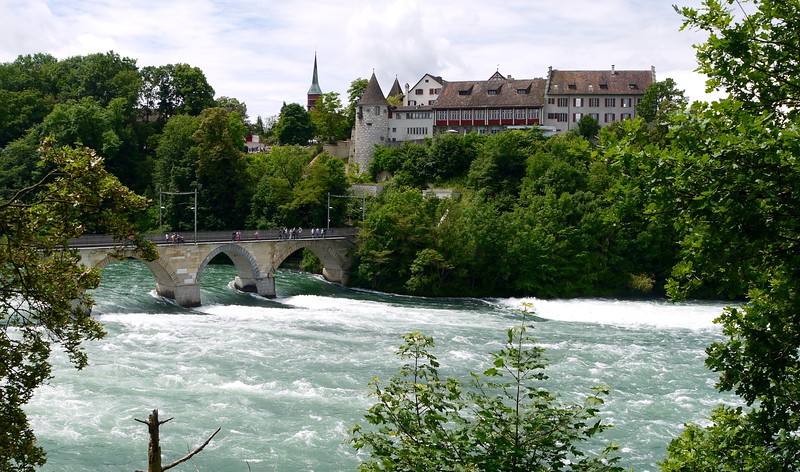 Schloss Laufen across the river

A small section of river had been diverted through a sluice to a waterwheel and people gathered along here. A many-leveled platform had been construction to give visitors the option to see the falls from many different perspectives. It was actually pretty cool. 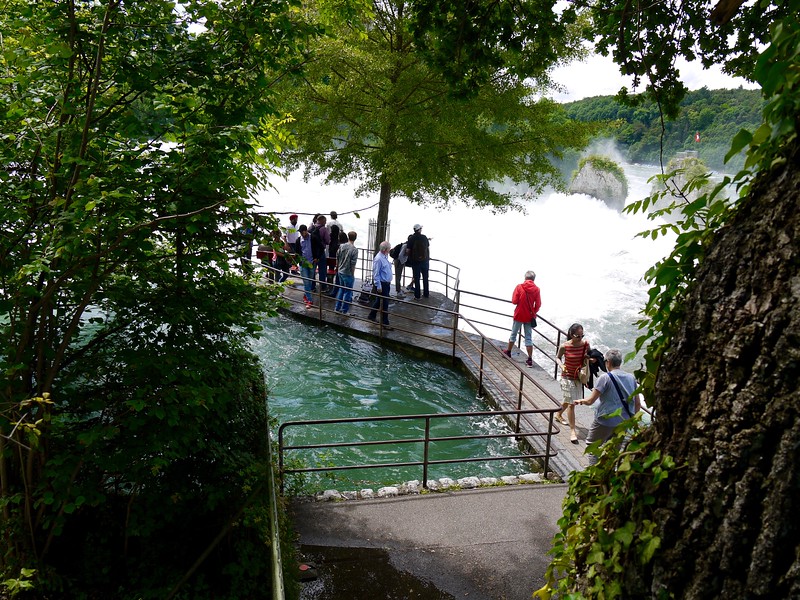 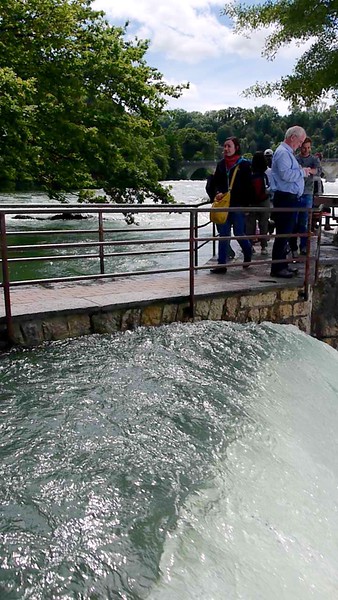 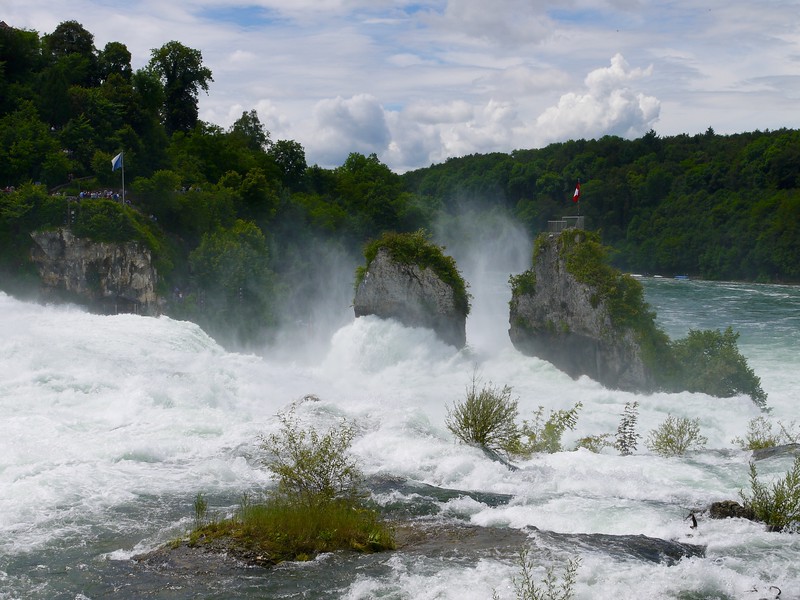 I love how the water hits the back of the rocks

I looked up some numbers. If numbers aren’t your thing, feel free to skip to the next picture. But if you like them, keep reading! The falls drop approximately 23 meters (75′) and in the summer, flows are generally 600,000 liters/second, and in winter it drops to 250,000 liters/second. Just for reference, the current flow was 875,000! Not nearly as high as the record (1,250,000), but still an impressive number. That record was set in 1965, by the way. Ok, enough numbers. Let’s start walking! 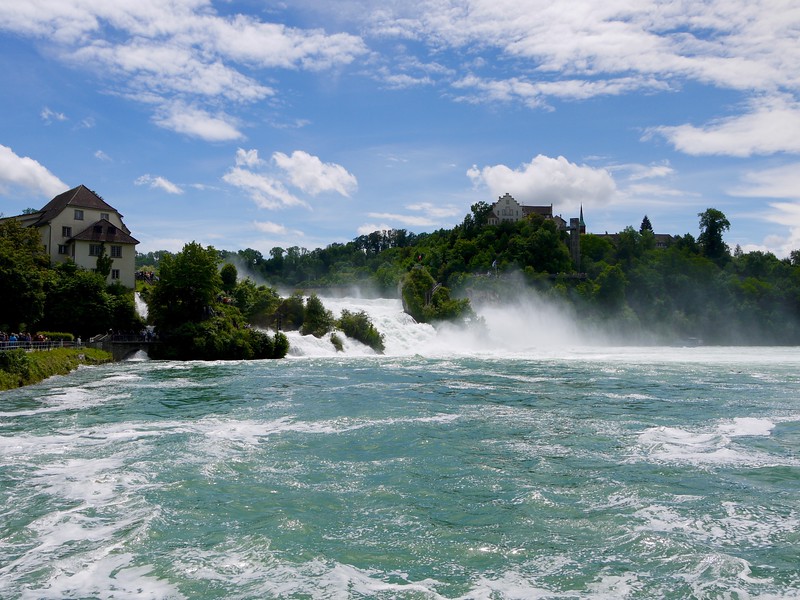 Since our goal today was to hike, we chose to hike downstream until we were ready to not hike anymore. We left behind the people, the boats and noise of the falls, and traded them all in for the peace and quiet of Europe’s 7th longest river.

Good bye, falls! (note the water washing over the path) 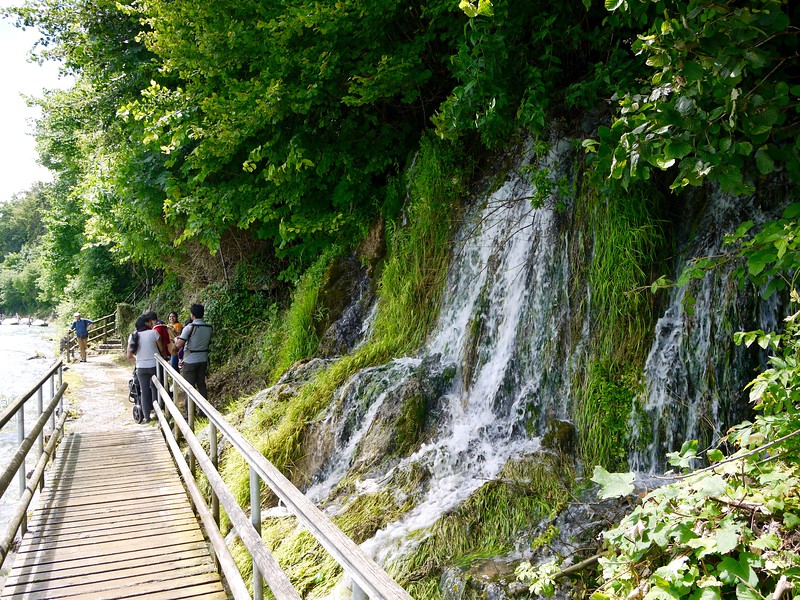 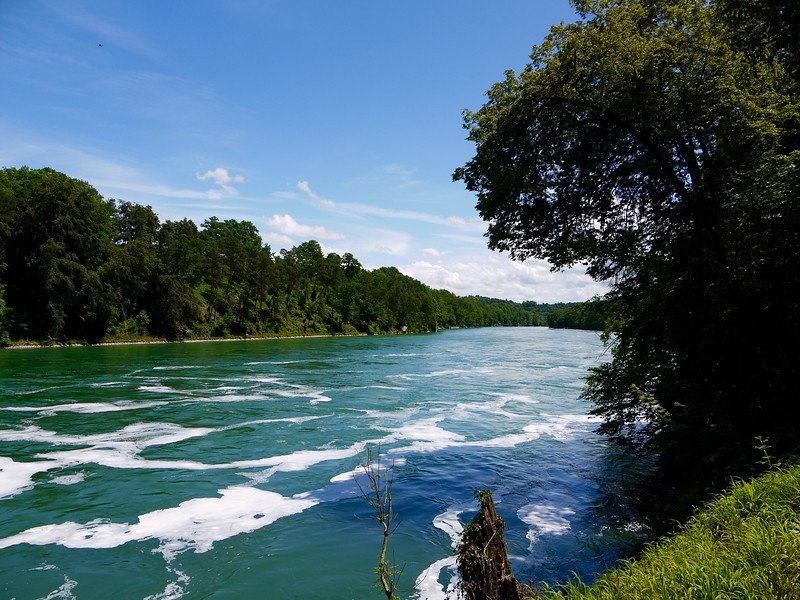 Did I mention the beautiful weather? 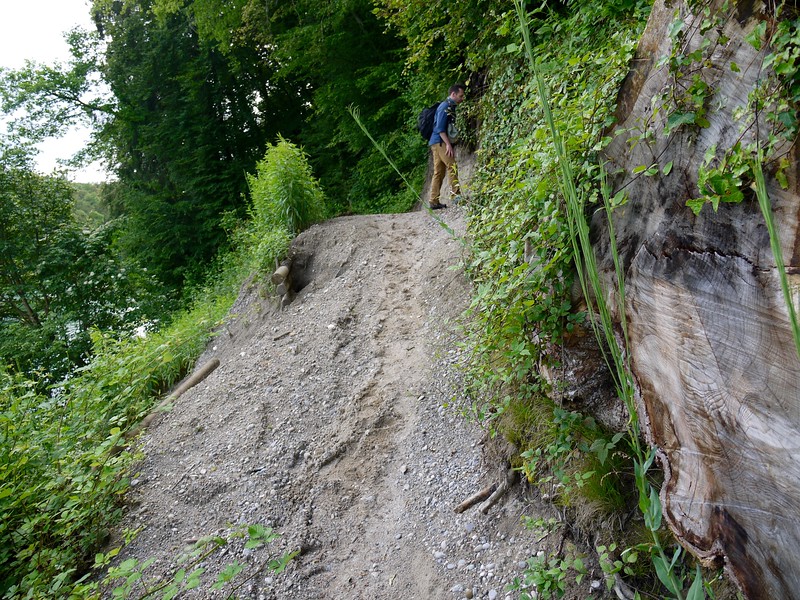 Sometimes the trail had some landslide damage, but nothing we couldn’t get over 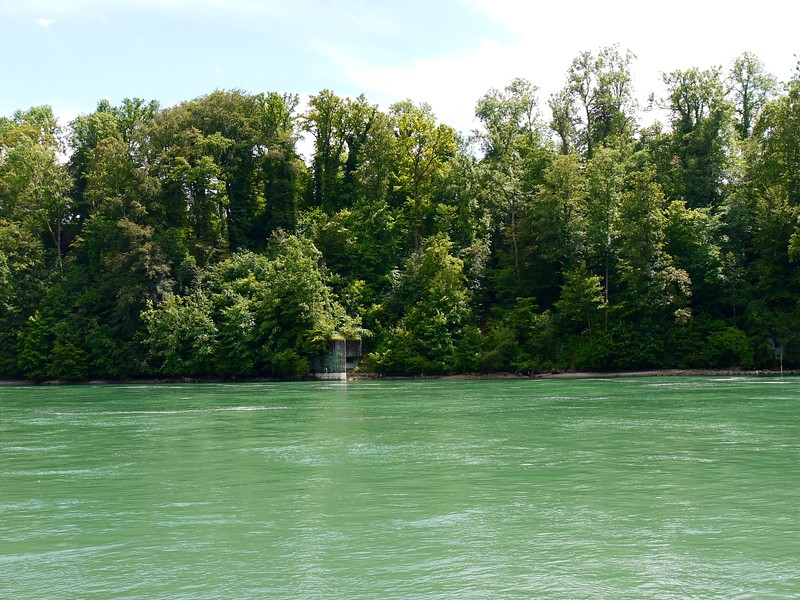 Periodic pillboxes along the shore

We had traveled about 7 km along the German side of the Rhine (I completely missed that border crossing and only realized it later, after checking the map) when we reached the town of Rheinau. A dam crossed the width of the river and it struck me: there were no locks. But why would there be? The river essentially “ends” just a few kilometers upstream. We crossed the dam and, at the same time, back into Switzerland.

The weather was turning: the wind had picked up, the temperature was slightly cooler and the clouds were getting thicker and darker to the west. A very light rain shower blew over but was gone before I could even justify getting out my rain jacket. I figured that it was just a matter of time before the heavy rains blew in. 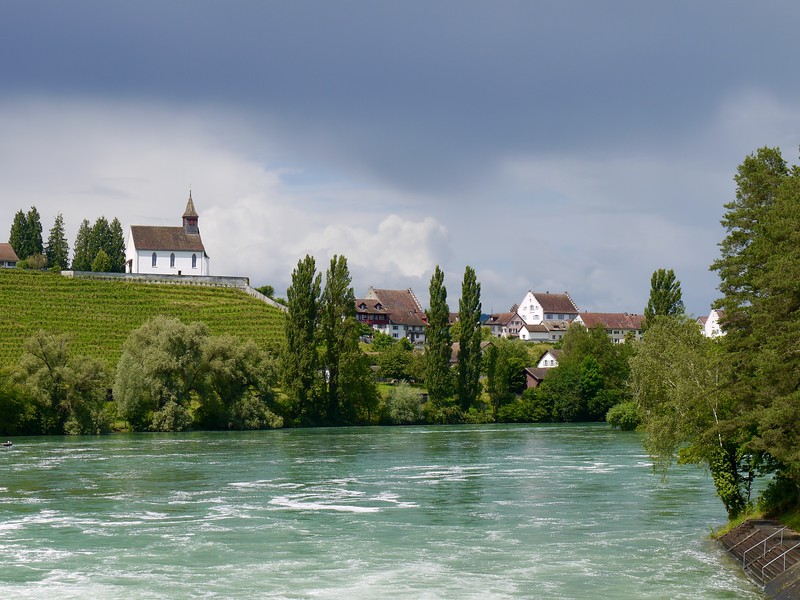 I was getting a little footsore and thinking about finding the nearest bus home. But Dan was ready for more and, with the weather still holding out, I gave in. He checked out the maps and pointed out a town further down the Rhine, just an hour and a half away. A little further than I wanted, but what the hell. It wouldn’t kill me, right?

A small collection of classic cars parked near the dam

So much automotive beauty in one spot! 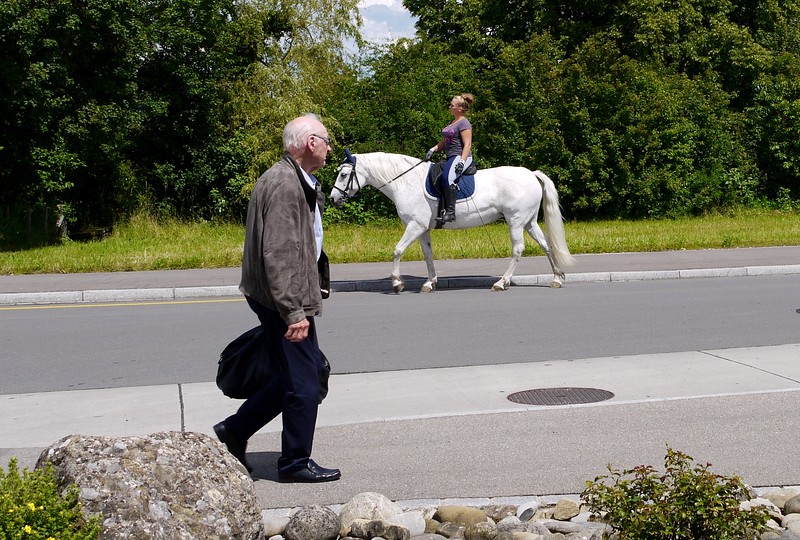 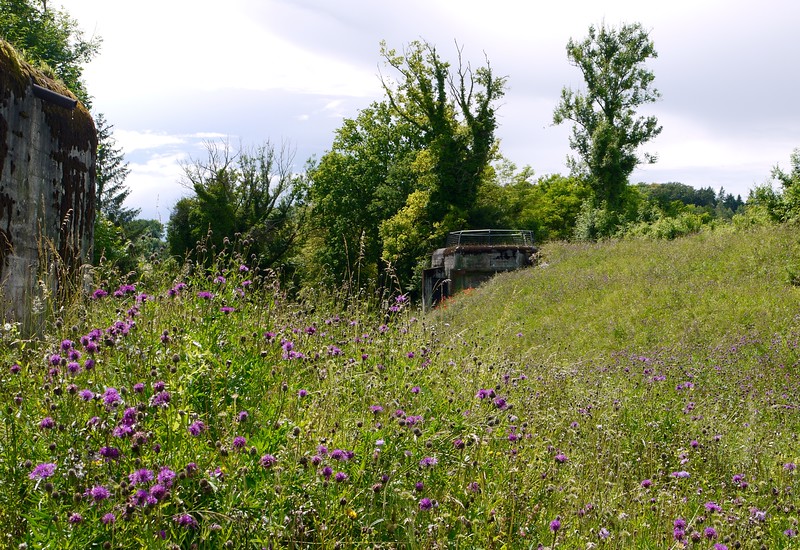 Pillboxes and wildflowers on the hill above the Rhine

Our new path took us up over the spine where the Rhine made a sharp bend, thereby eliminating a couple of kilometers of path. But now we were once again following the Rhine, but this time high up on the bank. 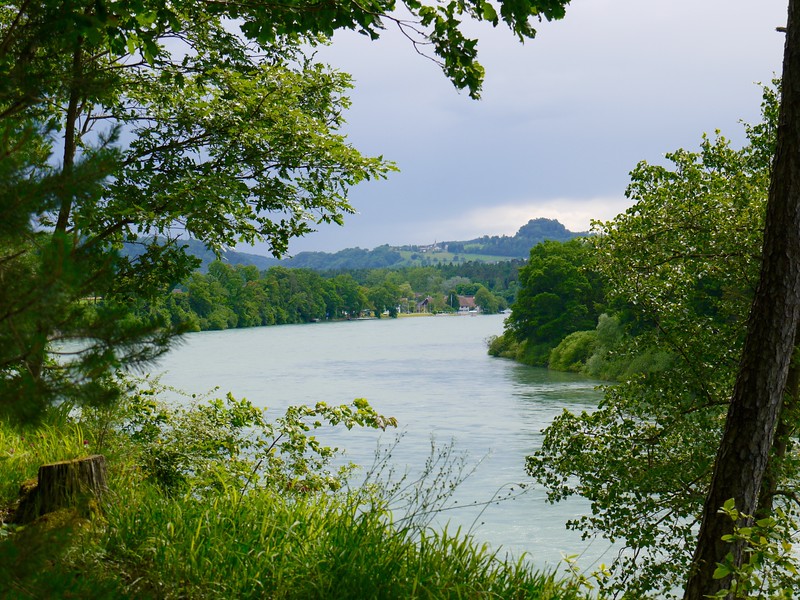 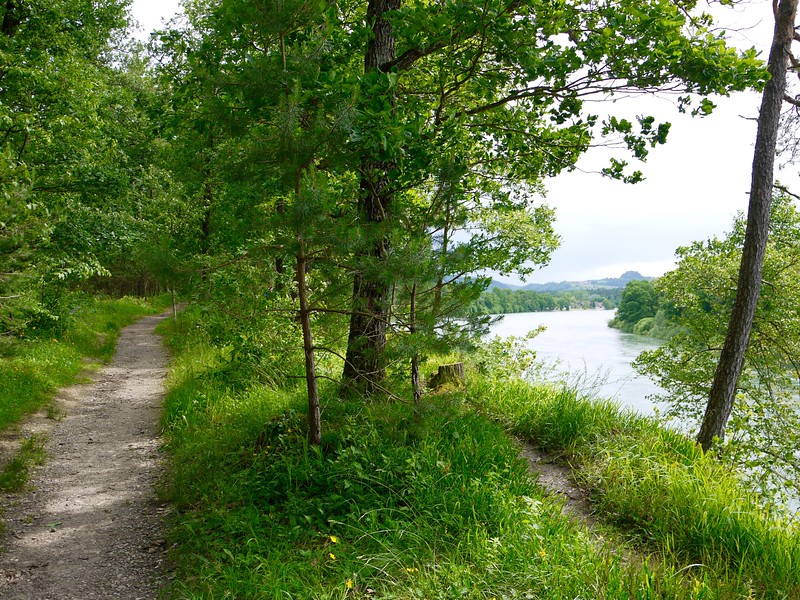 The path started as a wide paved path, which was, to be honest, quite boring. The sun was hot (!) and my feet were starting to complain a little louder. However, once the path changed into a beautiful open and green forest it was much more pleasant. The wind still blew strong down the Rhine and rain was a constant threat. And then we reached our destination: Ellikon-am-Rhein. Just a quick bus ride and we´d be on a train for home.

There were no buses in sight.

Dan madly researched on his phone for our options. I sat on the bench while contemplating asking someone at the local Gasthaus for a ride. As I looked around I noticed that the village of Ellikon was under attack – by the Rhine. The river waters lapped at the banks, sometimes overreaching them and drowning the grass. The local officials had set steel stakes into the ground and fasten metal walls to them along the river’s edge. Pumps drained the sewers via hoses draped over the walls, keeping the buildings safe from water rising from inside the walls.

Dan came over to me: he had found our new destination. It was the town of Rüdlingen, just a little further downstream, but on the other side of the river. Perfect! Now, how to get across the river? There hasn’t been a bridge in sight since we crossed at Reinau, and there was nothing visible downstream. There was, however, an empty ferry. A bell with a sign on it indicated that I was to essentially “ring for service”. Ring I did (it was loud!) and moments later a man rode up on his bicycle, letting us know that his wife was on her way and we could cross then. Perfect. 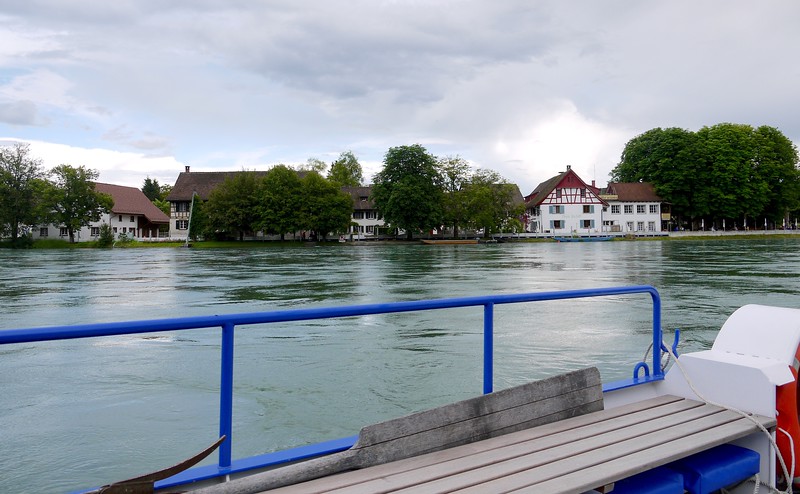 The couple were very friendly and confirmed that our destination was, indeed, the closest source of public transit. The husband was also adamant that while walking there that we take the upper path and not the lower path. “The lower path is flooded”. The ferry was the same type I was used to in Basel, with it attached to a fixed cable across the river. With the boat permanently attached to this cable, it was just a matter of adjusting the rudder and letting the downstream current push us across. Within minutes we were at the far shore and we disembarked with a friendly good bye and headed down the path. 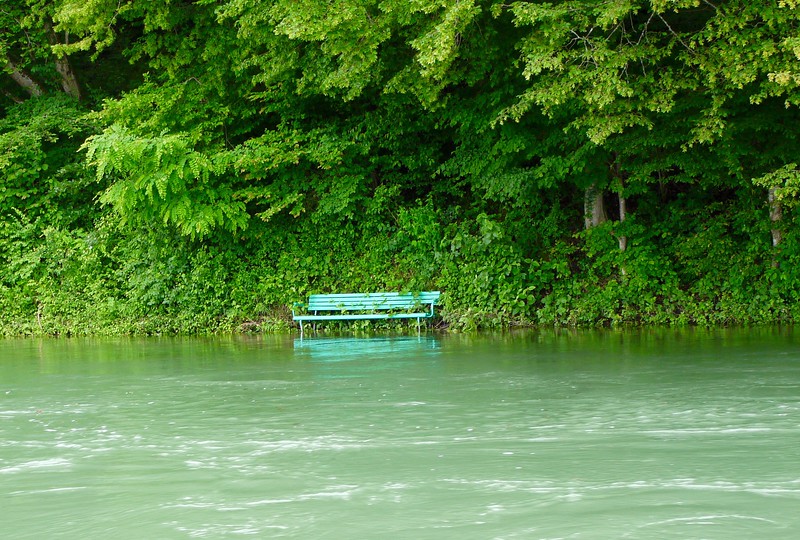 Yep, the Rhine is running high

Mosquitos plagued us for the first time all day. I put on my rain jacket simply out of fear of being eaten alive. But the woods were otherwise pleasant and we were sure to stay on the upper path when the wanderweg signs gave us a choice. It was a good thing, too, as the lower path was indeed inundated.

Lower path – at least what you can see of it

The last bit was on a country lane and up a steep wooded stair. I normally would have taken some more pictures along the way, but by now I was ready to be off my feet. Pulling out the camera was pretty far down my list of priorities. At the top of the steps was a bus stop – a wonderful, beautiful, sweet bus stop. And typical of Swiss convenience, it was only a fifteen minute wait until the bus came. 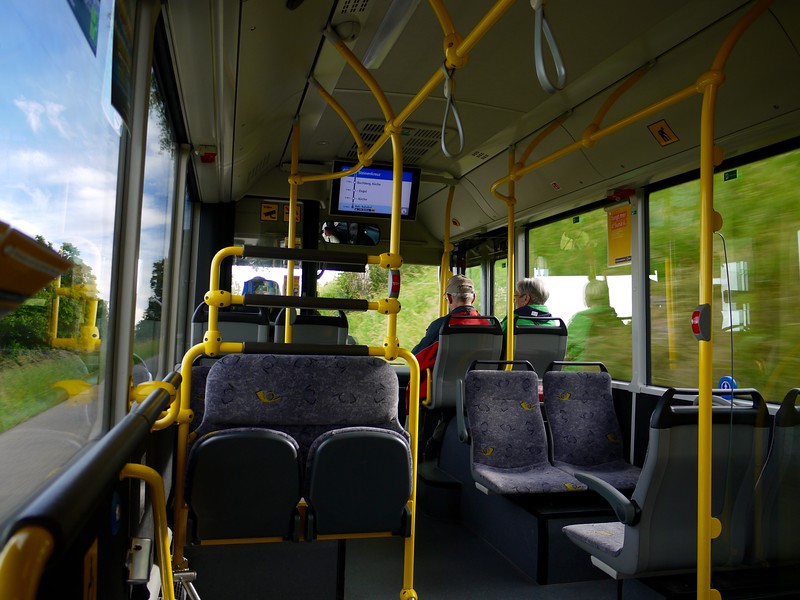 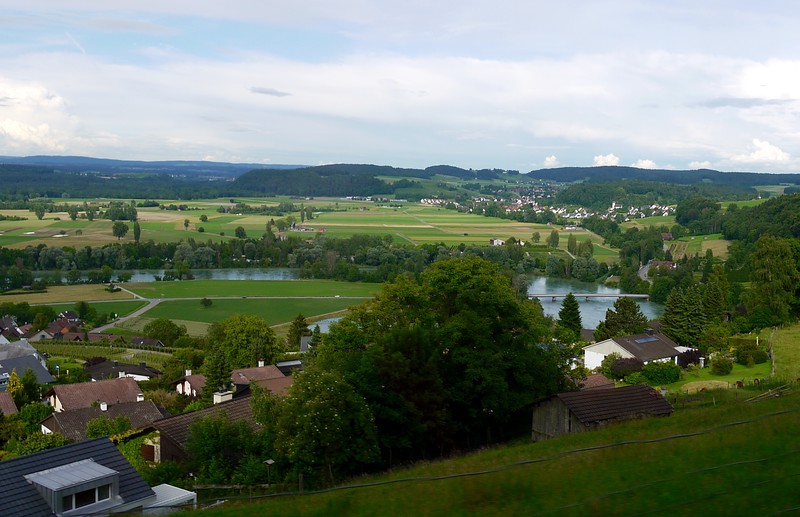 View of the Rhine from the bus

From the bus was a short ride on the train to Zurich and then a quick change to our train back to Basel. All-in-all, it had been a very long day, with over sixteen kilometers hiked and almost twelve hours passed since we had left our apartment. But we had seen some beautiful things and it was good to get out and enjoy a rare summer day.