Going to see the Rhine Falls, or so was the plan…

We have had a long, wet spring. It should be summer, but no one told the weather gods and they are continuing to hide the sun, covering it up with clouds that occasionally drop rain down. Ok, they frequently drop rain down. So when I saw a hint of blue sky today I took it as a sign and hopped on the motorcycle. With all of this rain, the Rhine Falls should be amazing! And since it is a place I’ve been thinking about going for a while now, I figured “Why not now?”

I set the GPS for Curvy Roads and headed north into Germany. One and a half hours – not too bad! I enjoyed a few roads that Dan and I had taken on a recent ride, and then took a turn onto new roads – and new weather. The sunshine that had teased me out of the apartment was gone, hidden behind a dense wall of clouds. 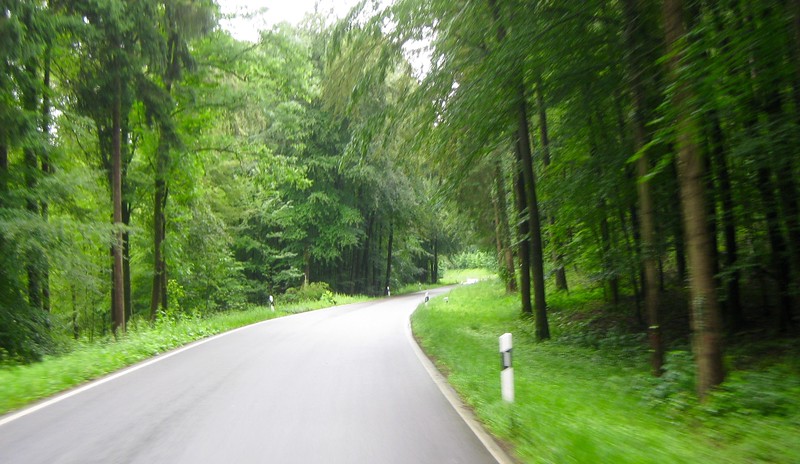 Lots of rain = lots of green 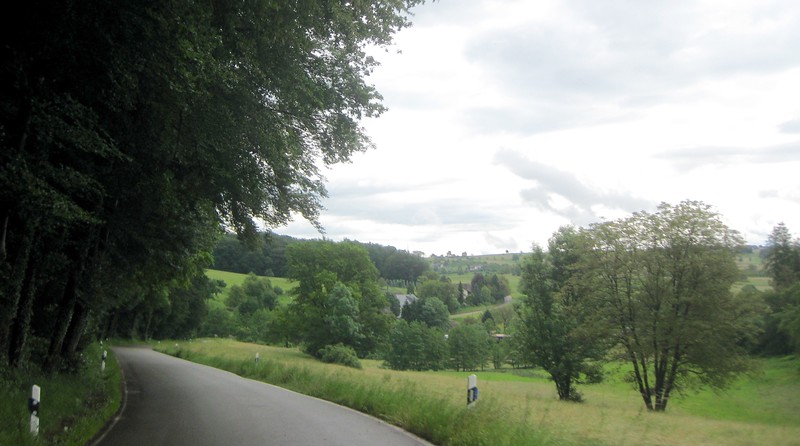 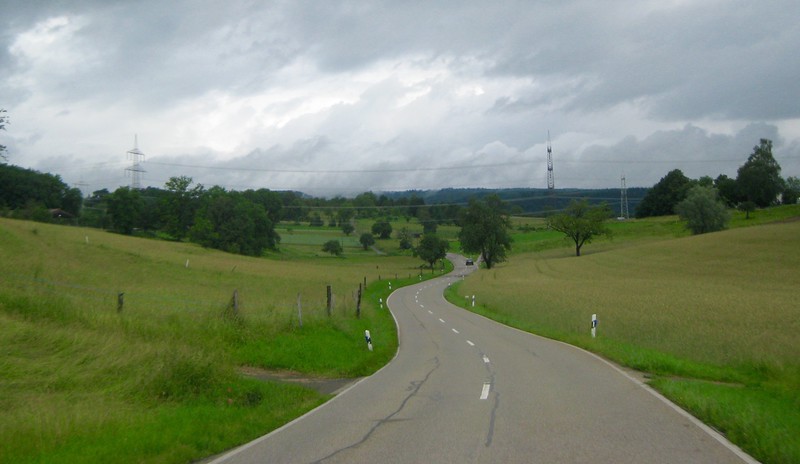 When I reached Schopfheim it started to rain. Big drops, but not a lot of them. People on the streets pulled up their hoods, or huddled into doorways. I dealt with the construction, traffic and narrow streets and finally broke free on the other side. 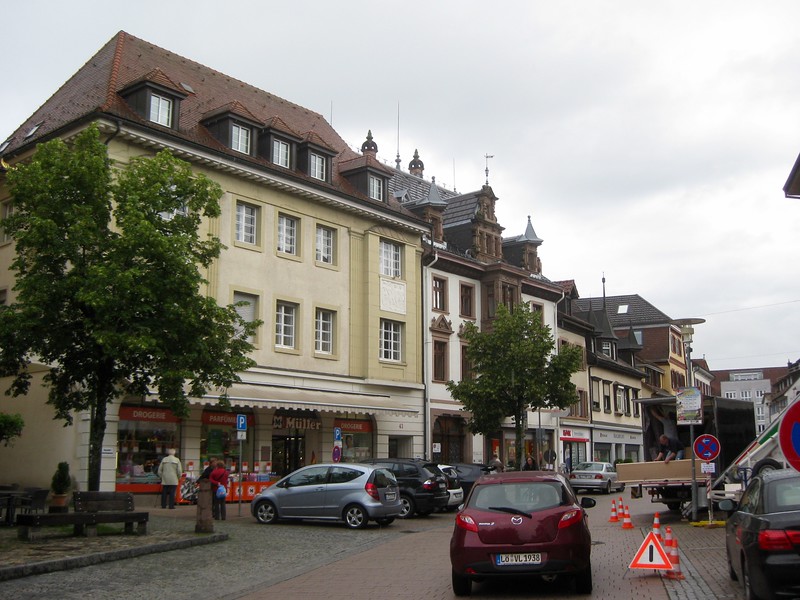 The road turned to the mountains and started to climb. With the elevation came more rain and low clouds. Really low clouds that trailed wisps through the tall pine trees that the Black Forest is named for. 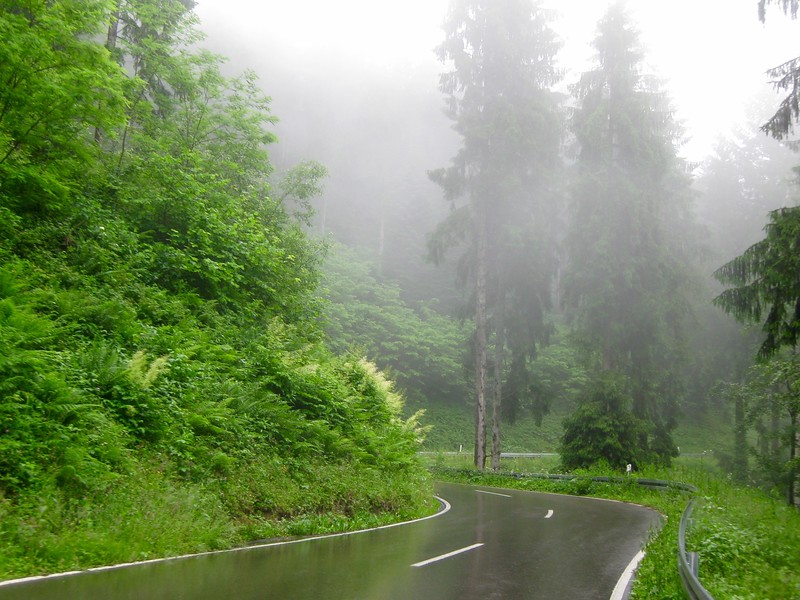 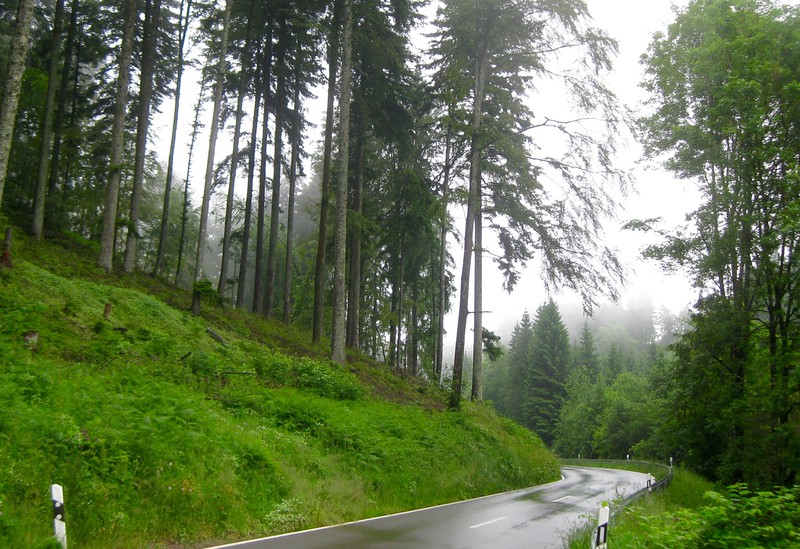 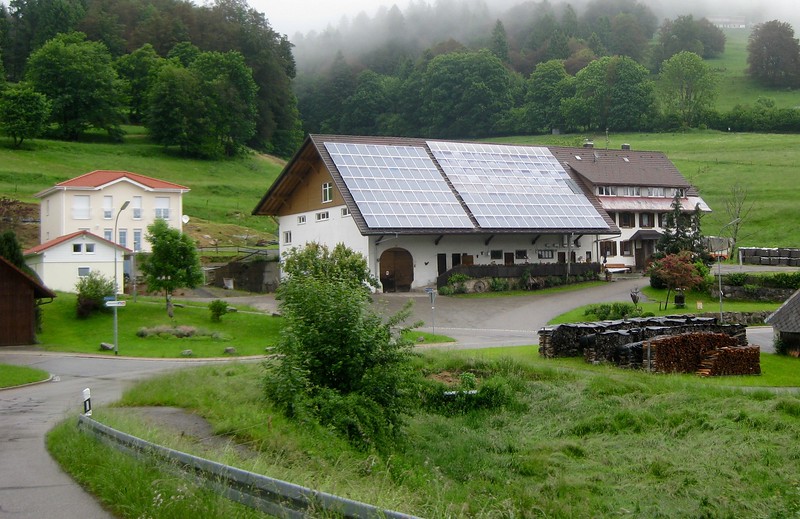 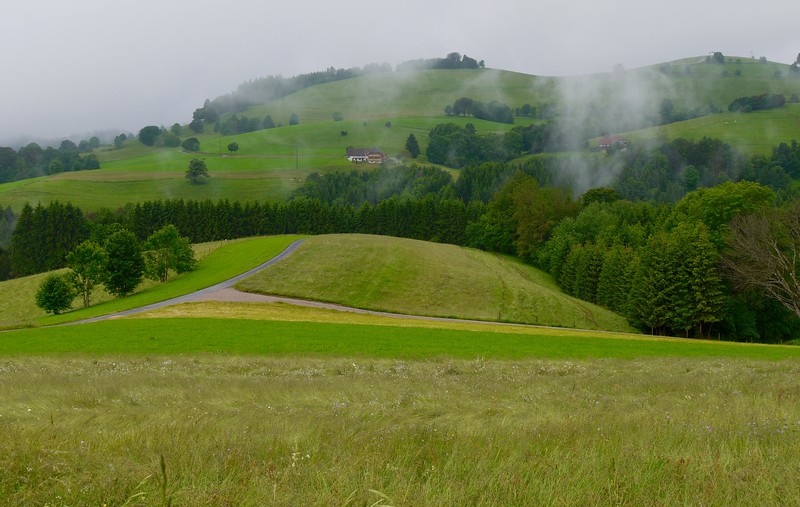 The temperature had been steadily dropping since I left Basel. What was originally a “should I even bother with waterproof gloves?” turned into “I almost wish I had my heated jacket”. Sure, 10C/50F isn’t that cold but when coupled with the damp air, it just seeped into me. I was beginning to doubt my need to see the Rhine Falls today… 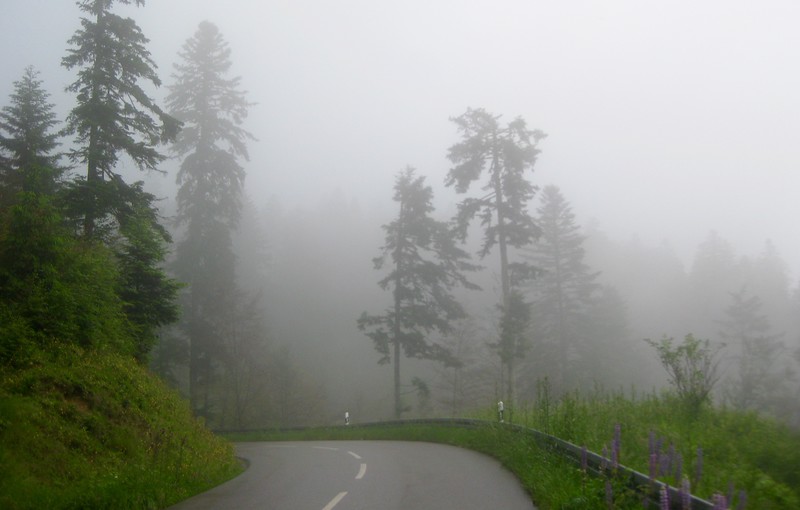 I reached and passed the town of Todtmoos and made my decision: I would turn back and save this ride for a better day and better weather.

Still raining as I made my return trip

The road between Todtmoos and Wehr is a delight. I could see that despite the car in front of me, and the rain coming down on me, this was a great stretch of pavement. I would have to come back. The road followed a narrow valley with tree-covered steep slopes on both sides and a roiling river in between. Occasionally a waterfall could be seen crashing down through the greenery and towards Wehr there were some water management infrastructure buildings on the banks of the river. I will definitely have to come back. 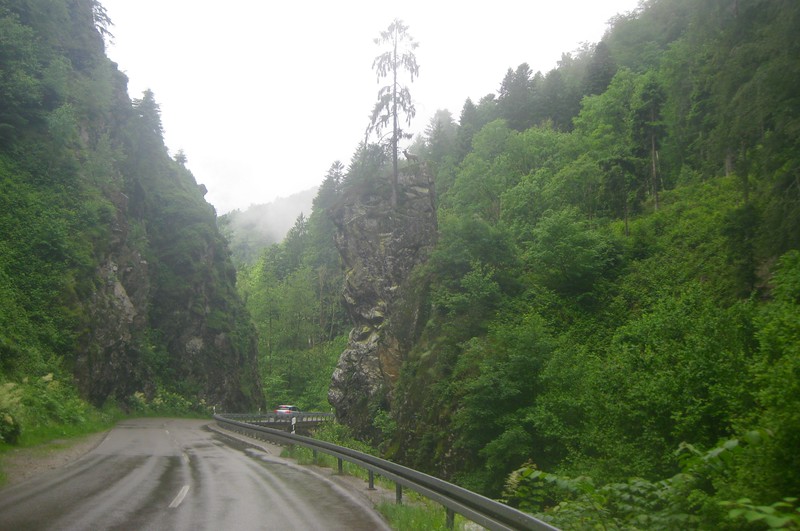 Ok, so I confess that my ride today had an ulterior motive: to do some shopping in the town of Rheinfelden (DE). I had planned to stop here on my way back from Schaffhausen, but since I didn’t go there, I guess I’d stop now. I set the GPS to my new destination and enjoyed some more back roads. And of course now that I had given up on my original plans, the sun was coming out… 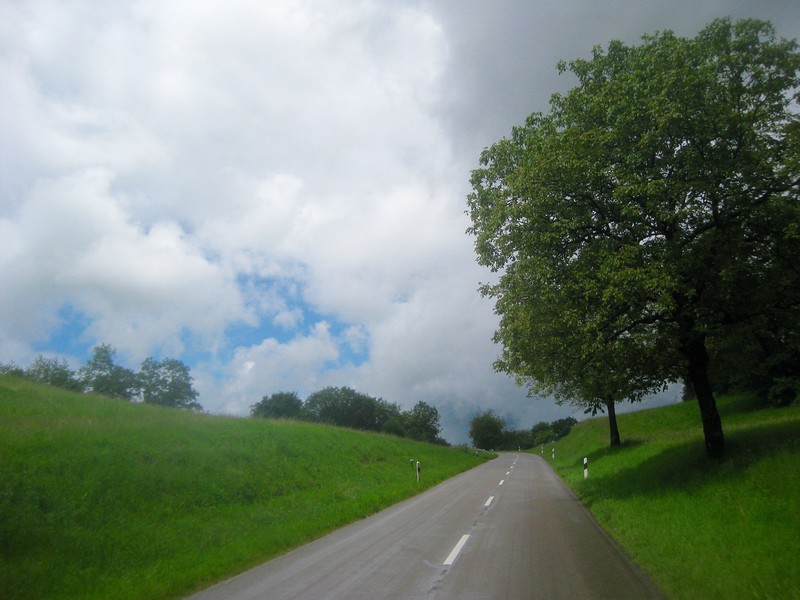 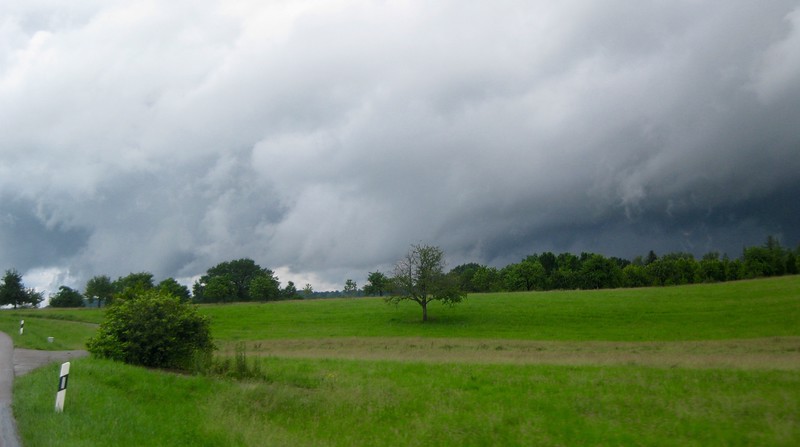 But still a threat of rain to the north

Running from the rain

I got to the stores I wanted to visit and picked up a few cat toys (I’m getting a kitten!). While I was in the store the weather had caught up to me, so I stood under the eave next to my bike and ate a wurst and fries. I knew that it was pointless to wait out the rain so I geared back up and took off into the wetness. The sun came out as soon as I crossed the Rhine and it was a beautiful rest of the day. Of course. 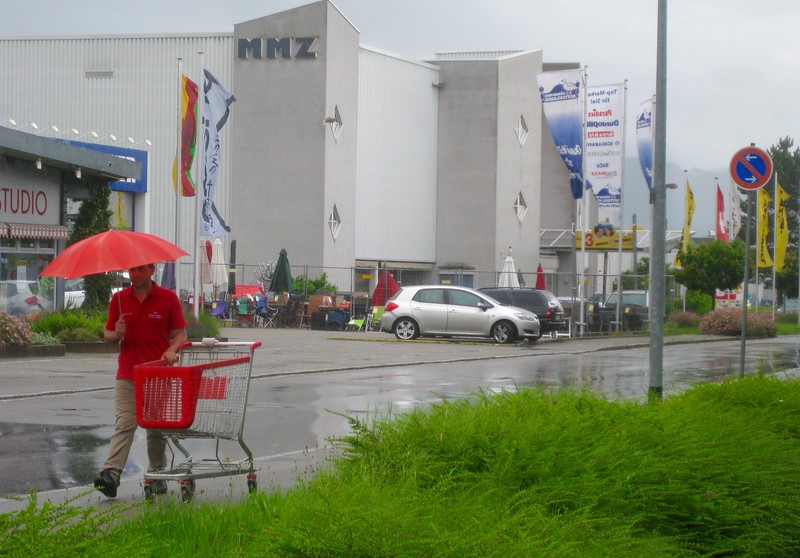