I considered riding to the Alps today, but the haze in the sky gave me the impression that I wouldn’t find the clear views that I was looking for. Plus it was a beautiful day and I figured that all of the passes would be packed with motorcycles. Since I don’t like to share, I decided on a tour through my backyard for some more Jura exploration. I chose St Hippolyte (south of Saint-Ursanne (CH)), engaged “Curvy Roads” and settled in for a nice tour.

The weather had broken a couple of days ago and it was in my opinion, the perfect temperature. Not just for riding, but for life. My bike showed a range of 18-23C (the high temperature was in a tunnel, oddly enough). It felt wonderful to actually feel chilly for once! The sky was overcast which was a mixed blessing: it kept the sun from heating everything up, but it also was not a good backdrop for any pictures I would take.

The first bit of the route had already been covered in my recent trip to St Ursanne, but then I passed that village and took some roads I hadn’t been on in a while. I love roads that follow deep canyons. 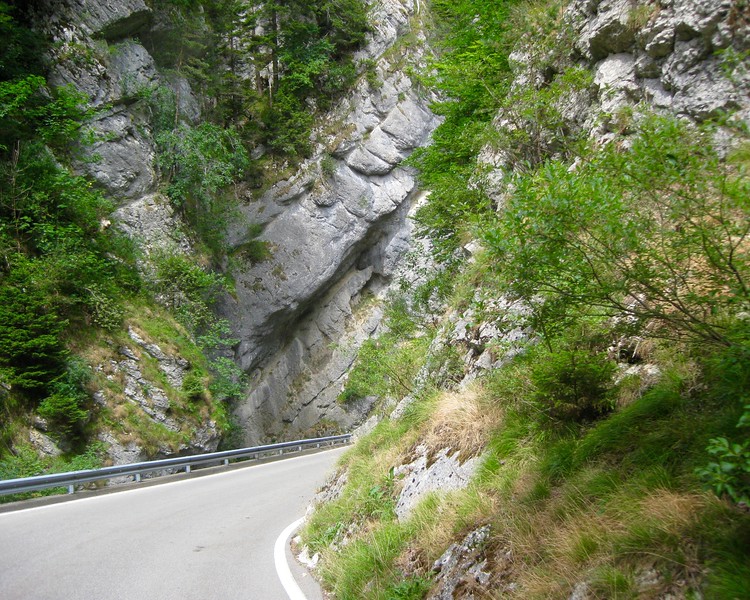 The Jura Mountains represent a classic thin-skinned frontal fold- and-thrust belt related to the formation of the Alps. Or so the internet tells me. I just know that I love the folded layers of rock and sheer cliffs. 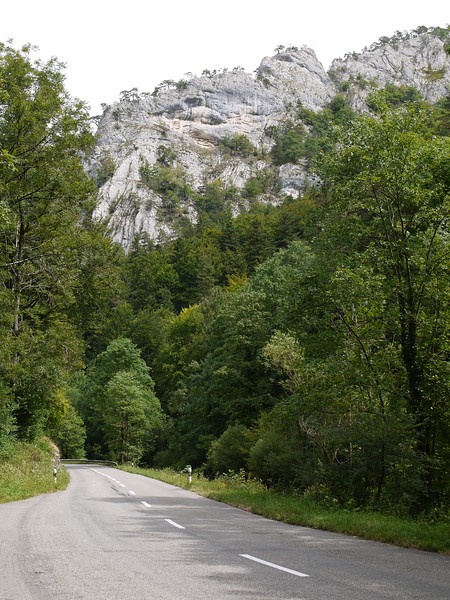 A couple of motorcycles parked off to the side caught my eye and I looked over to see a grotto (link in German) tucked off to the side. I figured that today was a good day to stop and smell the grottos and I, too, pulled off to take a peek.

I didn’t expect lit candles and fresh flowers inside

Spring with healing powers – if only I had known at the time!

Looking out from within

Back on the road and I continued south. Periodically I’d hit a stretch of road that seemed to be a favorite with the local motorcyclists, but for the most part I had the pavement to myself. 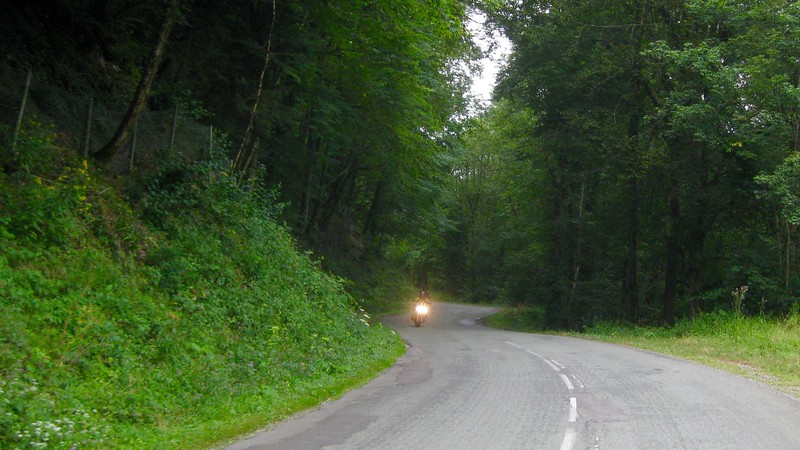 Every once in a while there is a house or two

After St Hippolyte I had set the GPS to some destination I already had in the GPS, although I’m not really sure where the destination was, but it was in the general direction I wanted to go in. After a couple of hours of meandering I figured that I should head home. I made some alterations to my little navigator and began the relaxing trip home.

I was further into the country of France and it was more farmland and villages than I had seen previously on today’s ride. In one sleepy village I spied half a dozen kittens sitting in front of a barn door. I couldn’t resist and pulled over for some photos. As I suspected, they bolted as soon as I got within shooting distance. All but one of them, anyway.

Zooming in on the brave one, and the timid sibling looking on from behind

I had been rolling through fields and forests for half an hour or so, with periodic villages along the way, when I came upon this memorial (?) in the woods. I was at least 2 km from the nearest village and it appeared that the road had been built up since the building was constructed.

Interesting to me was how the building used the living rock as the back wall and there was no visible way to reach the doors, other than a steep grassy slope. I couldn’t gauge the year of construction, but the interior appeared much older than the exterior. And again, I was greatly surprised to see fresh flowers and lit candles.

Link to inscription, if anyone cares to translate 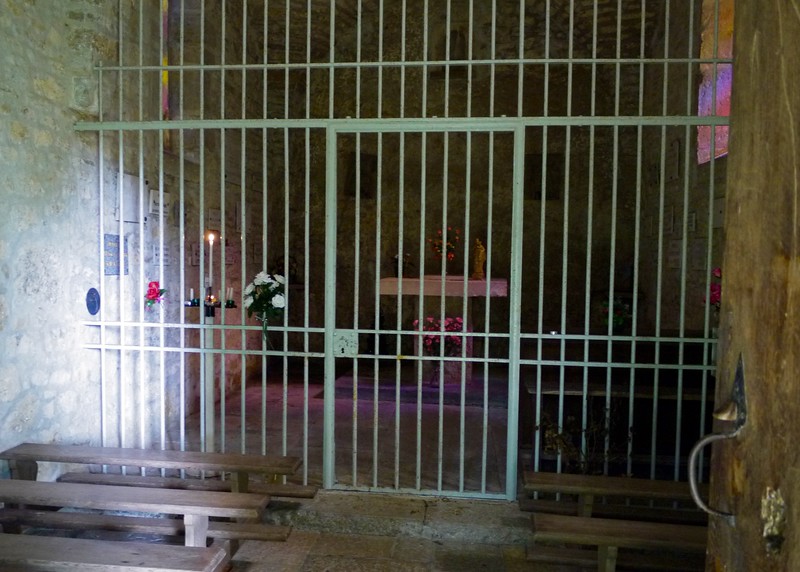 One of four stained glass windows

I climbed onto the rock at the back of the church to see if there was an alternative entrance (there wasn’t) but while I was there I checked out the roof tiles. Among the mosses I found a little treasure: a severely rusted pocket knife. I have no idea of how one of these things age, so I could’t tell if it was there for ten years or fifty. Perhaps I’ll do some investigating.

After my little exploratory stop I continued on my way through yet more forests and fields. 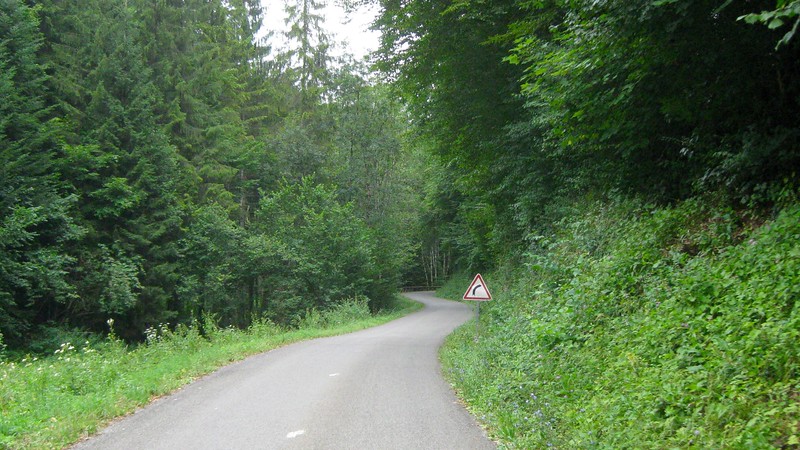 Every once in a while I spy an interesting car

Rolling (in) the hay 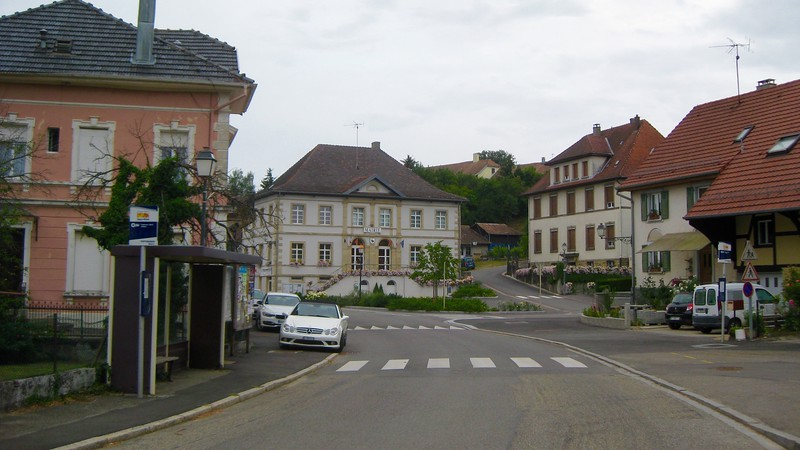 One of many French villages I passed through

It was a good day on the bike. Five and a half hours (roughly) and perfect weather the entire way. I saw some new things and re-visited some ones I’d seen before. I think it’ll be years before I am familiar with the Jura region, and decades before I get bored with it.