I am on a website called Sport-Touring.net and back in North America there is quite a large membership. There are a few of us over in Europe and it looked like the stars would finally align for some of us to finally get together. That was the impetus of this long weekend, although I think I got a lot more than I bargained for.

The weather was perfect. As I say, I could have asked for better weather but there wouldn’t have been any to give. The temperatures were a little better than expected, the sky held the right balance and variety of clouds, the atmosphere was crystal clear and the roads clean and mostly empty.

We packed up the bikes Friday morning and headed out around 10 am. It was a quick ride through Lucerne and around the southern shore of Lake Lucerne (Vierwaldstättersee). The military was in training mode and I saw a couple of dozen vehicles trundling along in long convoys. Quite a few of the trucks were troop carriers and the guys generally looked bored. Except for this guy who saw my camera and reacted with enthusiasm

South of Lucern – it’s going to be a good day!

You never know what you’ll see on the road

Traffic got a little thick coming up to the Gotthard Tunnel but fortunately the exit lane for Andermatt starts a good 2 km from the actual exit, so we got out of line a little early. And once again, our timing was impeccable for having lunch at our favorite restaurant in Andermatt: Toutoune. We “discovered” this place about two years ago and now any time we’re remotely close to the town, we stop in for a bite to eat. Hell, we’ve been known to ride from Basel for lunch! Anyway, we were not disappointed and were soon continuing our way to Italy. 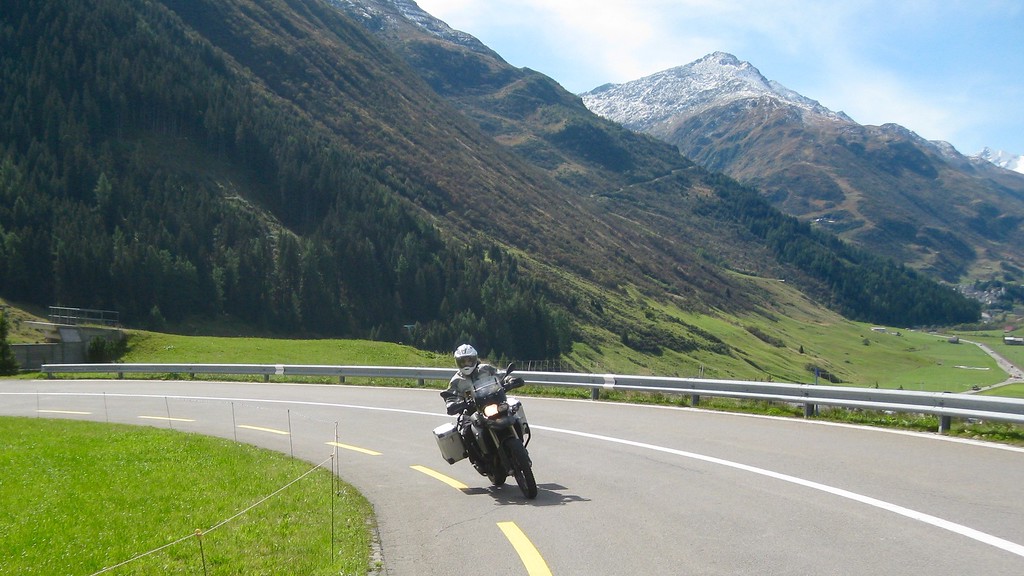 Dan and I had been on this stretch of road during our attempt to escape the heat last July. Then the temperature was around 34C, but today it was a delightful 12C. Dan and I both prefer cooler weather so this was a definite improvement for us. We climbed up Oberalpass, leaving Andermatt in the valley below us as we rose above the tree line. It snowed in Andermatt the previous couple of days, but the accumulation wasn’t much to speak of. The fresh snow did, however, add a nice touch to the autumn-tinted flora on the mountain slopes.

Andermatt, with Furka Pass in the distance 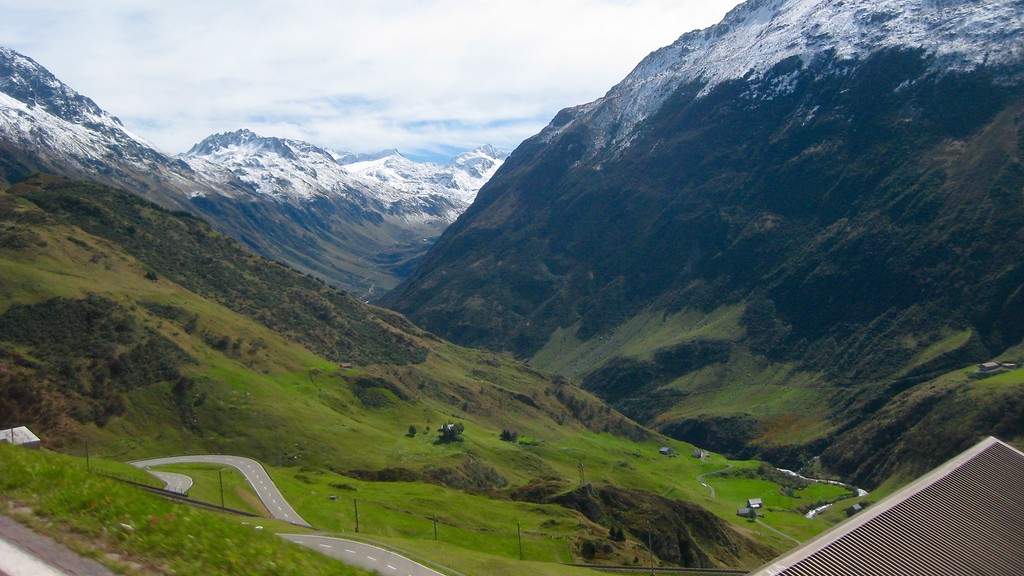 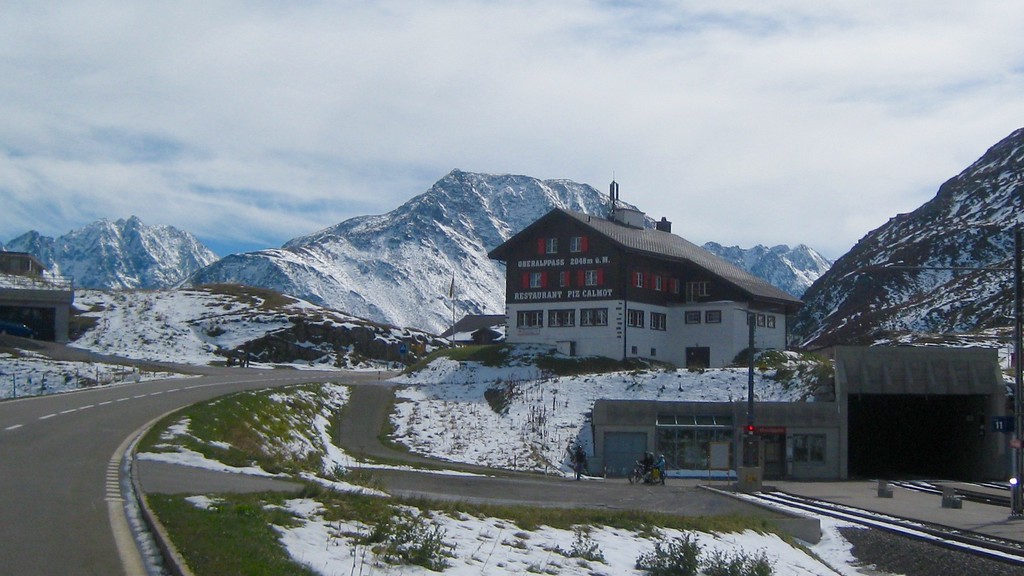 Heading down the east side of the pass

We continued east until we reached the town of Disentis. Where we normally have turned left, we went right. I had seen a mountain pass on the map that I wanted to explore and besides, it was better than the motorway from Gotthard to Bellizona.

I hadn’t heard much about this pass, so I wasn’t sure what we’d find. I didn’t expect much, in fact, since motorcyclists talk about what they like, and no one talked about Lukmanierpass. The road started out in a narrow gorge and took its time to wend up the mountain sides. Just a couple of switchbacks but for the most part it was a comfortable and pleasant stroll to the top of the pass. 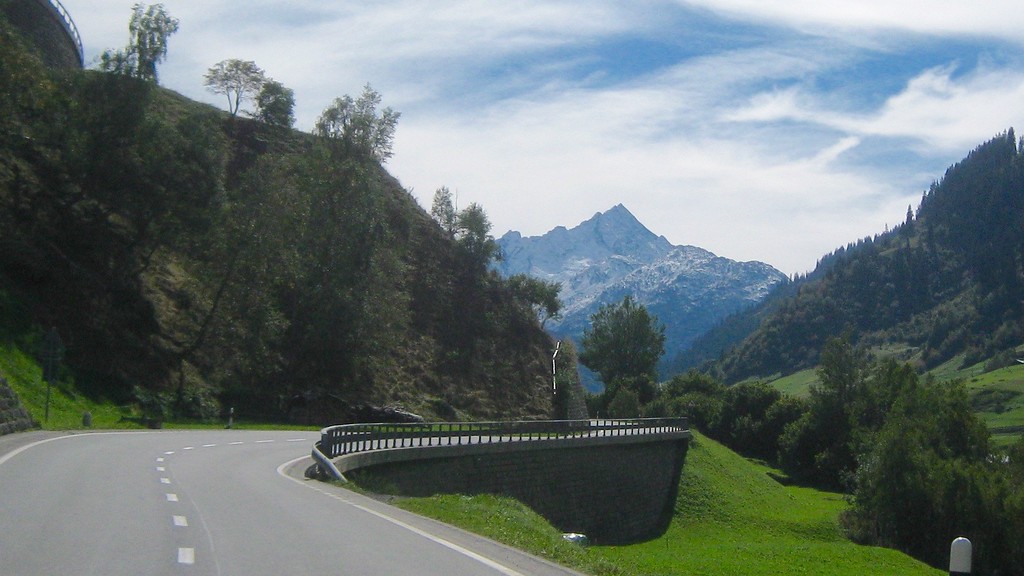 Reservoir at the top of the pass

Surprisingly, the other side of the pass wasn’t any more technical. Usually one side of a pass is tighter than the other, but for Lukmanierpass, both sides were equally relaxing.

And then the switchbacks began. We descended quickly into the Swiss town of Blenio, which looked a lot more Italian than Swiss. There still wasn’t any traffic on the roads, which was fine by me. 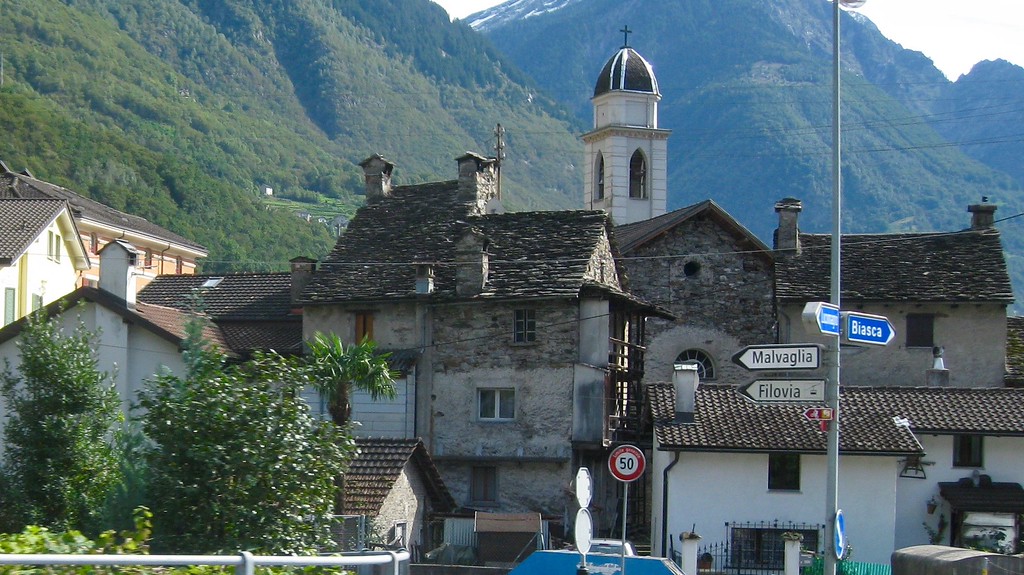 We were descending quickly out of the mountains and to the wide valley that leads south to Bellizona and Lugano. It was time to hit the motorway, as side roads would be painfully slow through this area. But first: the quarries! We were close to the source of fine Italian granite (ok, I confess that I really have no idea where fine Italian granite comes from, but we were close to Italy at least!) and at least a couple of quarries were visible on the lush, tree-covered hillsides.

The route I had planned would take us east to the town of Menaggio, just a short ferry ride away from our final destination. What I didn’t realize is that we’d have to wade our way through Lugano at 4pm on a Friday. It wasn’t the most relaxing time I’ve had on a motorcycle, and the “Italian driver” attitude was in evidence. Still, it was an interesting city.

Our reward was on the other side: Lake Lugano. Once we realized that no one (two wheels or four) had any hesitation to pass us and we should just keep our eyes on our mirrors to prevent the surprise, we enjoyed the view and the further descent. And then we came to the Land of Gas Stations. One after another, gas stations lined both sides of the road. To the right, they hugged the edge of the lake. To the left, they crammed between the steep rocky mountain walls and the road. After half a dozen or so we found out why: we were about to cross the Italian border.

Gas station with a nice view

Italian side of the lake

Looking north from the ferry on Lake Como

We missed the turn for the ferry dock in Menaggio, but we eventually found it. Unfortunately it was the passenger ferry dock. The car ferry was another 3 km down the road and we arrived with barely enough time to buy our tickets and get our bikes on board. The crossing was quick and we watched the shoreline of our destination come into view: Bellagio.