It was 5 pm when we rode off the ferry and directly to our hotel. It was only 1 km away, on the other side of the large I Giardini di Villa Melzi D’Eril, a beautiful garden on the shore of the lake. We parked the bikes, got the key to our room and began the process of ditching our gear and freshening up to enjoy our stay.

View from our balcony

We were to meet our friend Orson for dinner that night and he was staying at the same hotel. It wasn’t long before we found each other and enjoyed a fun evening together. We knew each other only from internet postings on a motorcycle forum, so it was fun to meet the “real” person.

Orson had to leave early the next morning so after seeing him off, Dan and I headed into the main town area. Since the road to town was barely wide enough for two cars and unsafe to walk on we decided to walk through I Giardini. There is a fee to enter, but our pass was good for the entire day and besides, we like gardens!

Built in 1808, the gardens and sculptures stretch out along the lake and over the natural hills of the peninsula. We followed the walking paths and enjoyed the beautiful fall day.

A different sort of switchback

We exited the garden, strolled by the ferry dock and started our exploration. We knew nothing about Bellagio: what it was known for, how it was laid out, the architecture. It was a complete unknown to us.

Right off the bat, I was surprised by the number of narrow stepped passageways that led up from the waterfront. There were two roads that ringed the town but everything in the center was for foot traffic. It was early in the day which meant that the weekend tourists hadn’t yet arrived in force. We enjoyed our strolls, checking out the stores that didn’t sell anything that we couldn’t live without and enjoying the ever-changing views down the alleys and passages.

The upper road to the north side of town

We walked through the town and then continued north, following a single lane road past some elaborately gated villas until we reached a small marina at the northern tip of the peninsula. The day was perfect and we could look across the water to Varenna on the eastern shore and Menaggio to the west.

The town was quaint and it was hard to imagine that anything untoward ever happened. This feeling was strengthened when we walked a garage with a tiny local police car parked inside. Shortly after this we started to look for a quiet spot for lunch. I wanted to sit outside, but didn’t want to be right in the thick of the ever-increasing number of people walking down the passageways. Therefore I was thrilled to find Ristoro Forma & Gusto, tucked away on a side alley. We could sit outside and watch the people go by, but not have them walk right past our table. The food was excellent and we enjoyed our break from walking up and down the hills.

After lunch we made arrangements for a late afternoon boat tour. We opted for the 2 1/2 hour tour, with one hour in the boat and 1 1/2 hours at a famous villa to the south. Again, completely ignorant of the area we didn’t know at all what to expect. But now we had some time to kill so we walked back through the gardens to our hotel room and chilled for half an hour before we got up and walked back through the park again. We were getting our money’s worth from our day pass! 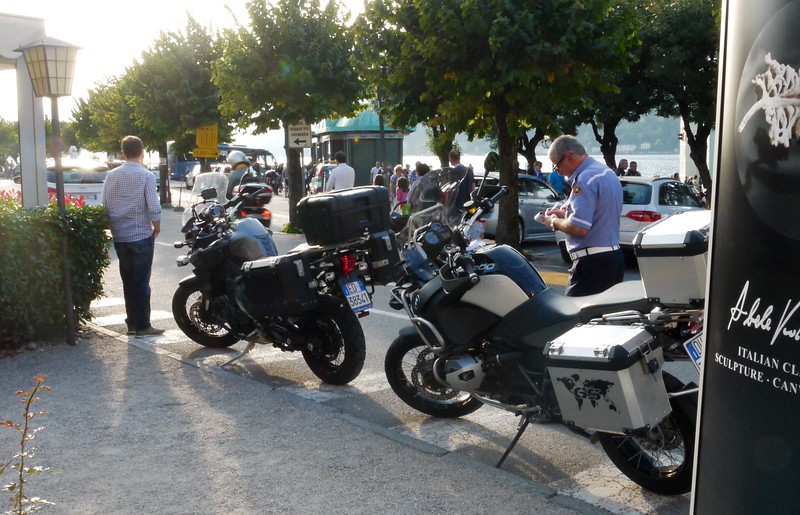 Whoops! Getting tickets for parking in the pedestrian zone

We chose “Bellagio Water Taxis” because the seating was limited (10 passengers) and we were sure to get some good, local information from the guide. We were right. The tour company was owned by a local couple and they were very enthusiastic and cheerful.

The first stage of the boat tour was motoring along the opposite bank while Captain Luca pointed out various villas and structures. It was interesting, although I confess that learning that Lake Como is 410 meters deep yet still reaches 30 °C (86 °F) in the summer was the most interesting fact he mentioned. Then we reached our destination: Villa del Balbianello.

A number of feature films have used the villa for location shooting, including A Month by the Lake, Casino Royale and Star Wars: Episode II. It was yet another surprise on this short trip. The history of the villa extends back to the 15th century when the Franciscans built a monastery on this little point of land. The villa was built on the site in 1787 and had a varied ownership up until its last resident, famous explorer Guido Monzino , died and left it to the National Trust of Italy. And that is who was there to greet us as we disembarked from our tour boat: a guide from the National Trust. She knew her stuff and gave us a great oration while we explored the various structures and rooms on the property.

View along the western shore 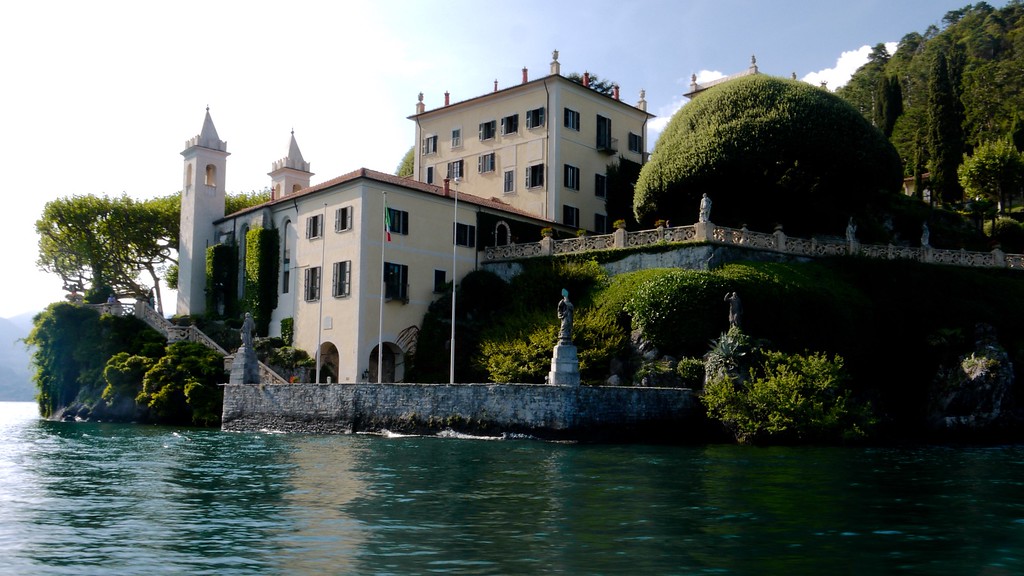 Bellagio in the distance

When Mr. Monzino willed his estate to the Trust, he planned very carefully and left everything as it was when he lived there, so as to leave a complete record of the property. This meant that every room was full of interesting and cherished items, including some of the most valuable artefact collections in the world. Unfortunately, the lighting was not good enough to capture these rooms with my camera, although I tried a few times. I had much better luck in the gardens…

Bellagio in the late day sun

Once back on land we opted to take the hotel shuttle back to our room. Once there, we wandered down to a restaurant near the lake’s edge that had piqued our interest earlier in the day. Fortunately we had made reservations earlier in the day, as at least three couples were turned away within twenty minutes of our seating. The food was good and exceptionally interesting, but what really caught our attention was the waitstaff. It appeared as though it was everyone’s first day on the job and the hostess was doing her best to direct them for the best service possible. They all did a good job and while we’re still not sure of the circumstances, it did liven up the evening as we speculated throughout the meal.

The Return (link to come)