Hiking around a WWI Memorial site.

During my motorcycle trip last week, I stumbled across the Hartmannswillerkopf WW I Memorial. It was an impressive looking building but I didn’t take the time to investigate. Instead, I made a mental note of where it was and planned to come with Dan some day.

Today was that day.

We packed up with BMWs with our hiking boots and jackets and headed north into the damp fog. I knew that the fog was probably (hopefully?) restricted to the Rhine Valley, but I wasn’t sure how far it would extend and if our hike would be in the sun or the clouds. The answer was given shortly after we passed through Mulhouse: we would be basking in the glorious autumn sunshine.

I didn’t bring my little Canon PowerShot on this ride, so no on-the-fly shots of us following the lazy route up into the heart of the Vosges mountains. You’ll just have to take my word for it that it was an enjoyable trip.

Almost to our destination for the day, Dan calls out to me that he’s going to stop and check something out. He felt a strange disturbance in his Cana-dar and sure enough, on the curve was a WWII memorial for a Canadian bomber that crashed nearby. Immune to the lure of Cananadia, I continued on to the top of the hill where I had a great view while waiting for him.

A slightly closer look, with Dan walking up from the left

As you can see, it was a beautiful day. I didn’t think that it was possible for the fall colors to exceed last week, but they did. I was thrilled that we had come back to explore on this beautiful day.

While waiting for Dan I heard – and then saw – this bike coming up the hill. He had two cars close behind him and I could see why after watching him round the curve near the Memorial: he was riding so slowly that I was surprised that he didn’t simply fall over. Once past the curve the first car passed him, and you can see in the photos below that he was shortly passed by the second car. I guessed “new rider” and wished him well on this fantastic day.

Another spectator on the hill

It was less than 10 minutes before we arrived at our destination: Hartmannswillerkopf National Monument. We parked our bikes, stuff our riding gear into the cases and put on our hiking boots. The jackets we left on the bikes as well, as it looked like it would warm up considerably in the next couple of hours.

The building itself wasn’t what I thought it would be. I imagined that it would be more like a museum inside – I guess I didn’t take the name “memorial” to heart. Instead, it was a large open space with some memorial plaques on the walls. I didn’t take any photos, but here’s one to give you a better sense of scale and space. 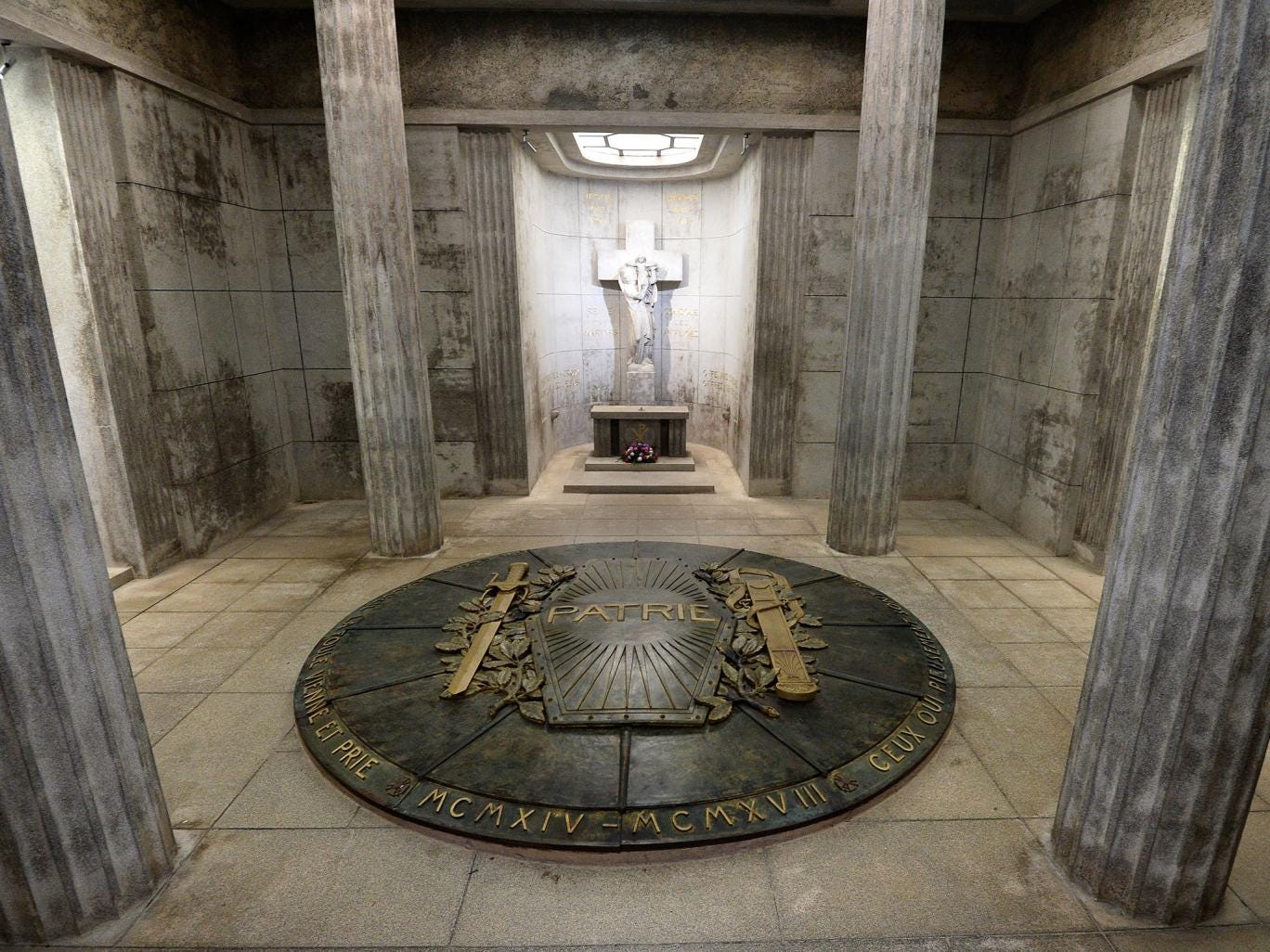 A major draw to this site is the trenches. While most battle fields have long since been eroded smooth and are either covered by forests or manicured lawns, the Harmannsswillerkopf site still showed the scars of the war, even if under the new growth of trees. From the Wiki: “Today, the area is a French national monument. There is a museum and a cemetery at the site, and it is also possible to explore the extensive trench system. Because the lines were static for such a long period, the trenches are very well preserved, especially on the German side of the mountain.”

Behind the Memorial building 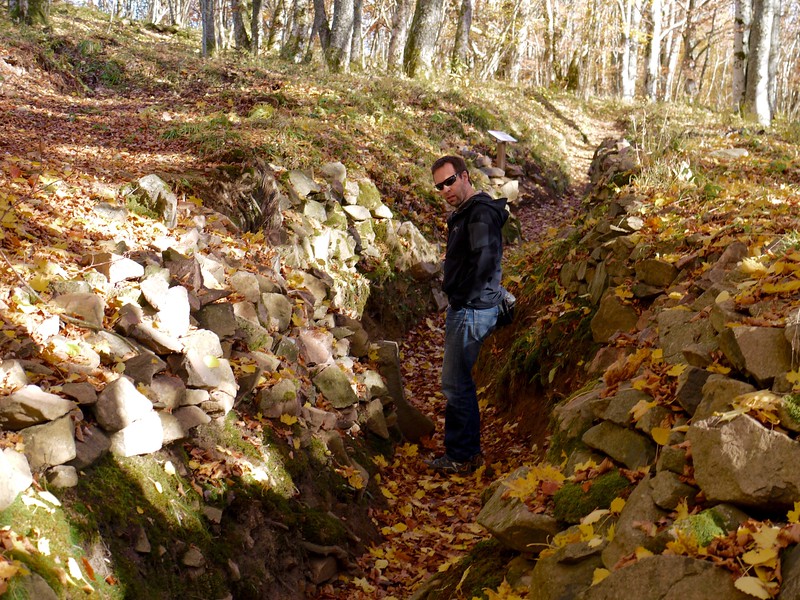 Dan in one of the French trenches

Not all fortification parts were replaced 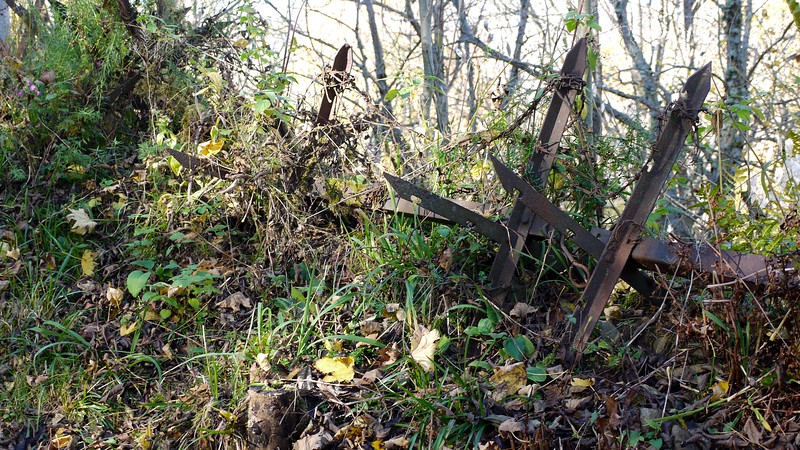 There were informative signs along the way, and the various trail choices were (somewhat poorly) marked out. But at least the signs were in many languages – including English – so were were able to understand what had taken place here many years ago. The signage pointed out the distinctive differences between the French and German trenches – although to be honest, the change was hard to miss. Where the French trenches were shallower and poorly defined, the German trenches were deep and highly engineered. The Germans looked like they had no intentions of giving up their ground.

The lay of the land was such that there were two points jutting out into the Rhine Valley. The trail system we were on led us out to one of the promontories, just over 3,000 feet over the valley below us. The sun was still strong and there were other people enjoying this exceptional day. Picnickers’ laughter rang through the clear air and kids ran across the landscape. With time, the land and the people have recovered.

Looking west back towards the memorial site

The view was amazing. A rocky promontory gave us a view that will not easily be forgotten: A vast field of clouds buried the valley below us while in the distance the jagged peaks of the Alps lined the horizon. To the north I could see fingers of clouds snaking up the valleys of the Vosges and the brilliant leaves cloaked the mountain sides.

View of the Rhine Valley

Looking north along the edge of the Vosges 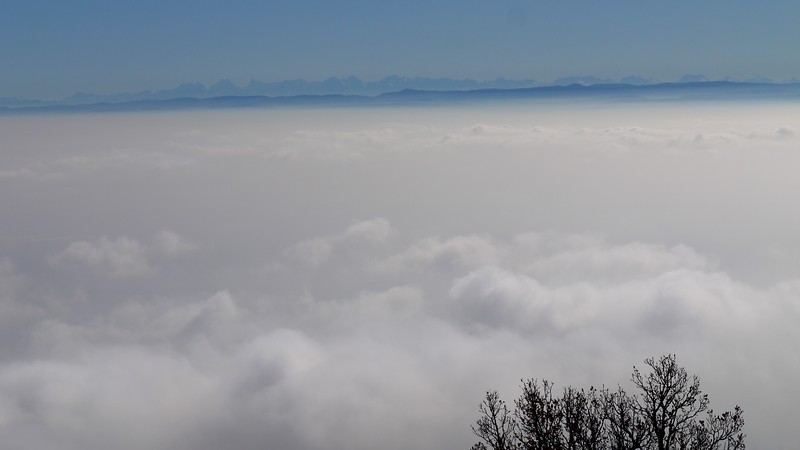 Blanket of clouds with the Alps in the distance 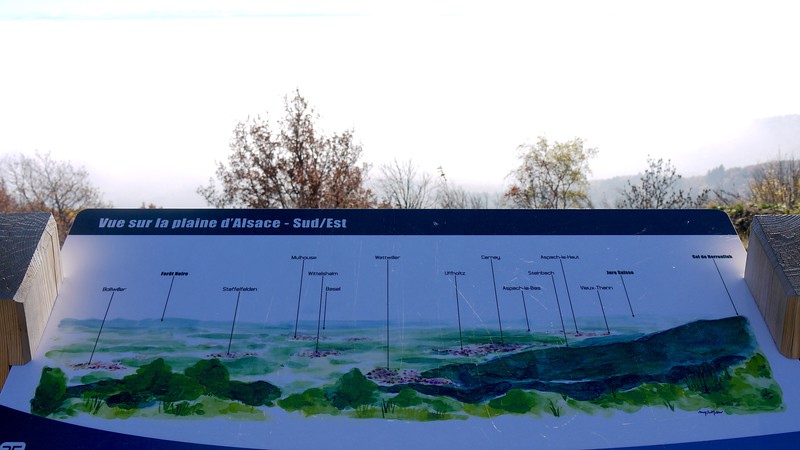 After enjoying the view we turned our backs to the clouds and followed the trails to return to the Memorial Site and our bikes. We were deep in the German region of the ancient battle site and the works were extensive. A cable car had been built to resupply the trenches from the valley below and its housing, as well as hospital, bakery and communications structures, were still well defined. 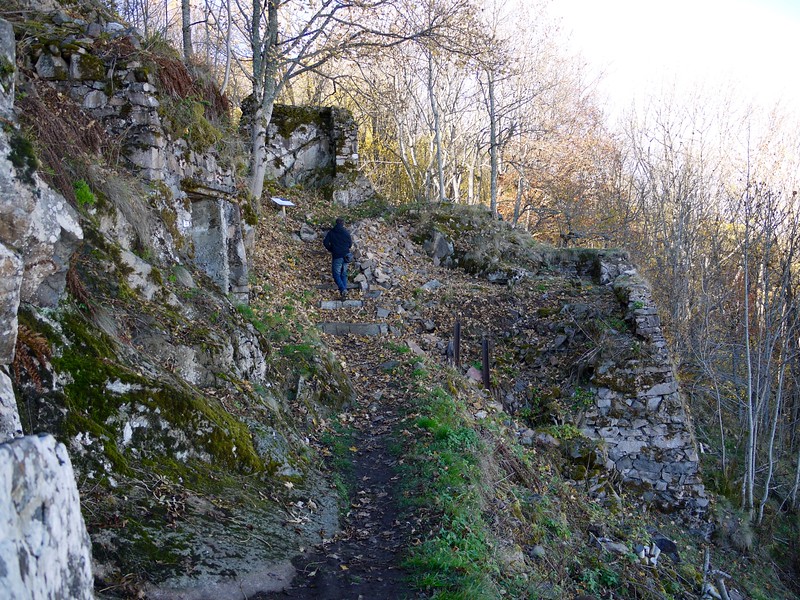 We had reached the end of our hike. It was just a short jaunt down (and up) the hill to where we left our motorcycles. Once there, we threw on our gear and made the 30 minute ride back into Basel – and back into the clouds.