Thursday was an official holiday in Basel, and my new job offered a „bridge holiday“ on Friday, so as to give us a four day weekend. Sweet! I told Dan to take Friday off as well, and then upped the stakes by also asking for a half day on Wednesday. It was time to take a real motorcycle holiday!

I had booked an apartment in the town of Chiavenna, Italy. I knew nothing about this town other than its location on the map. I had originally set my sights on the southeastern corner of Switzerland, as it is the one area of Switzerland that we know almost nothing about. But then as I poked around on Google Maps I realized that Italy was really close – and a lot cheaper. Why not just go a little further and save some money? Plus, Chiavenna was located at the junction of three valleys, so surely there would be plenty to do for our stay. I had promised our host that we´d arrive as early as possible on Wednesday, even though it looked to be early evening before we would get there.

Dan and I did our half day at work and came home, loaded up the bikes and were on the road a little later than I had hoped, but still a reasonable time. We would take the motorway the entire way so as to make the best time possible. While this sounds miserable, it really isn´t so bad in Switzerland: even the most functional roads can be beautiful. So we rolled quickly along the Rhine, Lake Zurich and south into the Alps. Along the way I played a new game I had come up with: decipher the Swiss license plate canton abbreviations. Each canton has their own two letter designation and while I knew a few of them, I didn’t know them all. I had printed out a list before leaving and was now putting my new-found knowledge to the test. I did fairly well, although the “SZ” for “Schwyz” always made me think of Szechuan chicken.

Traffic was pretty thick and a lot of drivers tend to follow really close to the vehicle in front of them. This normally isn´t a problem, but a few cars ahead of me someone had merged into a tight space, causing the vehicles behind to hit their brakes pretty hard. I did, too, which engaged my ABS. Dan said that my bike hopped up and down quite a bit, but to me it felt just a little bumpy. And apparently I am not used to ABS, as I tried to modulate my rear brake so as not to lock up the rear wheel. I didn’t hit the bumper in front of me – although I was close: the guy in the next lane over was looking at me in alarm afterwards. Ah, excitement on the not-so-open road.

Once we exited from the main roads and were heading to Julierpass, we were much more intimate with the roads and scenery. This stretch of road hugged the mountainside high above a deep gorge, with nice curves and fantastic views on our left. We came upon a construction traffic light, in place to allow for passage on one lane sections of the road. We waited patiently behind the few cars on the road with us, although I´m sure more local riders would have moved up to the front of the line. As it was, there was a second construction light just a couple of kilometers up the road, so we couldn’t have gotten very far ahead anyway. It was too bad about the traffic and construction, as this was a really nice stretch of road.

The temperature started to slowly drop and the towns that we passed through gave evidence of tourism, some of them even having grand resorts and hotels. St Moritz was just down the road and it was easy to imagine that this was overflow from that prosperous town. We were approaching Julierpass and I was pleased that it was a clear, sunny day with dry pavement. I had been watching the weather forecast for the previous two weeks and at that time there was a lot of rain forecasted for the entire country, and this area was forecasted to receive between 3-7 cm of snow. We debated if we should rent a car instead, or even change our destination, but as the days went by, the forecast improved until here we were with blue skies and fast roads.

Julierpass (el. 2284 m) was cold. The BMW´s temperature gauge flashed when it reached 3.5 C, and continued to flash as the numbers dropped until it reached the low point: .5 C. Thank goodness for heated gear and grips. There were few cars traveling on this Wednesday afternoon and we enjoyed the clear roads, zipping over the pass and dropping down the other side.

The town of Silvaplana was tucked up against the shores of Silvaplanersee and marks the junction to go to either St Moritz or Italy. We took the turn south for Italy, and followed the lake for quite some time. The snow-covered peaks on the other side of the lake were brilliant white and the lake reflected the blue sky. We really lucked out with this weather. 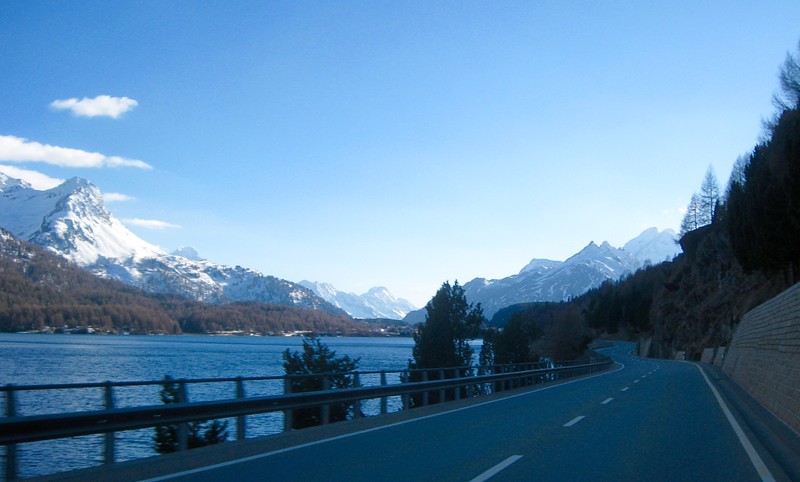 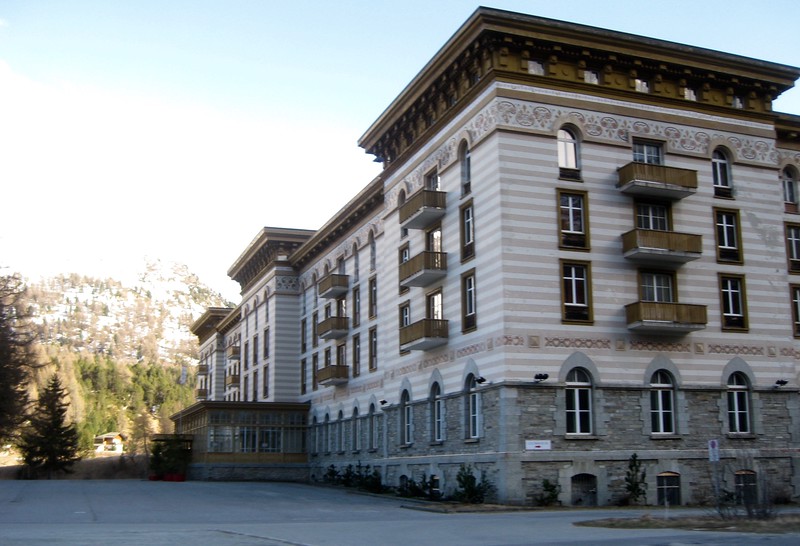 Maloja Pass surprised me. When choosing our route to Chiavenna I could have gone with Splügen Pass or Julierpass. I chose Julier because we had taken Splügen once before but I did not enjoy it. The corners were too tight and caused more anxiety than enjoyment when navigating them. Oncoming traffic was always a concern for me, as many switchbacks did not have enough space to allow vehicles to stay in their lane. But Maloja Pass was unexpected; a bonus pass, if you will. Tighter than Julierpass, but not quite as tight as Splügen, it was the perfect compromise. It was a pleasant little descent to the valley below.

After the twisty bits of Maloja Pass

We crossed the Italian border and continued down the valley. It was much narrower than it looked on Google Maps. I was surprised that there weren’t more waterfalls tumbling down the mountainsides, draining away the winter snows. Then again, spring was well on its way here and there wasn’t a lot of snow left to drain. 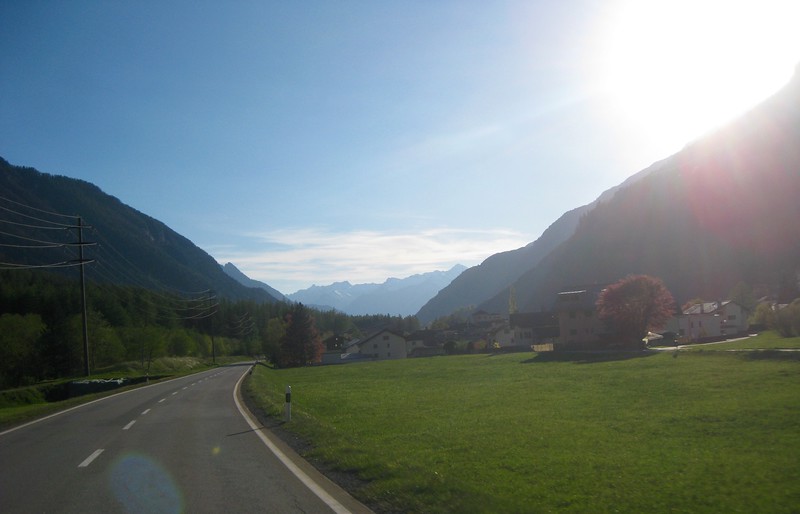 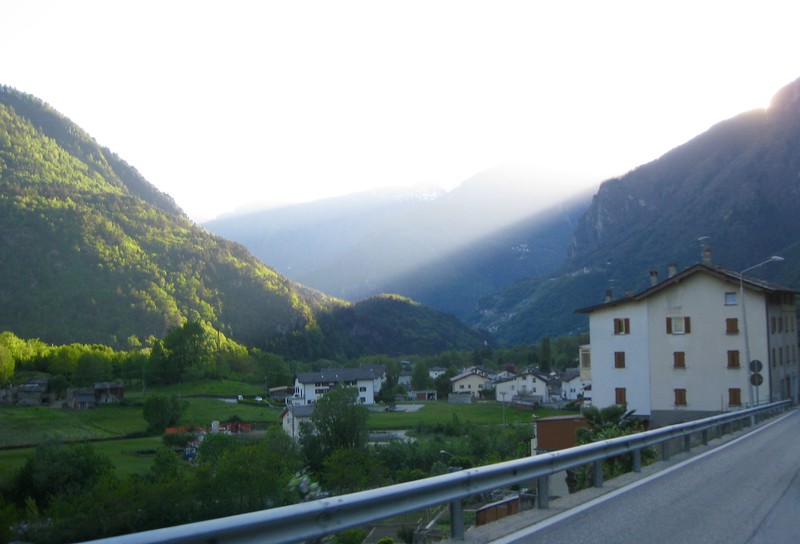 It was still daylight when we pulled up to our AirBnB apartment. Our host Ottavio was waiting for us and quickly let us in and gave us the Mini Tour. There was a secure garage for our bikes, some fresh food in the fridge and a nice little toiletry kit on the bed. He had to get back to work so he wasn’t able to spend much time with us in getting us settled in, but he was very friendly and made sure that we were ok with everything before he left.

And how here we were: in the town of Chiavenna for the next three days. Our holiday has begun.

View from our apartment at dusk