It was time to go home. I had estimated a departure time around 9 o´clock, knowing full well that we´d be late. Sure enough, by the time we had a bite to eat, packed up our bags and dragged them downstairs, it was already 9:30. Still, it wasn’t a bad start to the day. We were going to retrace our steps over Mojito and Julier passes, as I still had an aversion to Splügen Pass. I didn’t want to start too early, as the forecast had called for rain and freezing temperatures on the passes. If we crossed them after 10 am then we should be passed any danger of ice. So we were right on time!

Much to my surprise, the morning was sunny and dry. There had been a chance of rain in the valley the previous night and, while I would have loved to watch a storm roll in over the mountains, it was nice to know that the roads were dry and clean. We retraced our route up the valley and crossed the border back into Switzerland. Dan noted the complete change (read: improvement) in the pavement as soon as we crossed that geo political line between Italy and Switzerland, but that was the only thing noteworthy. No one stopped us or wanted to see our paperwork. I guess immigrants generally aren´t entering the country by motorcycle. 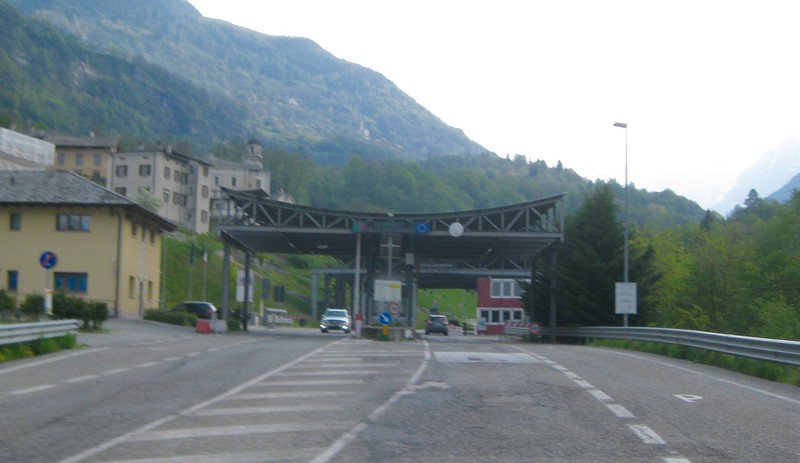 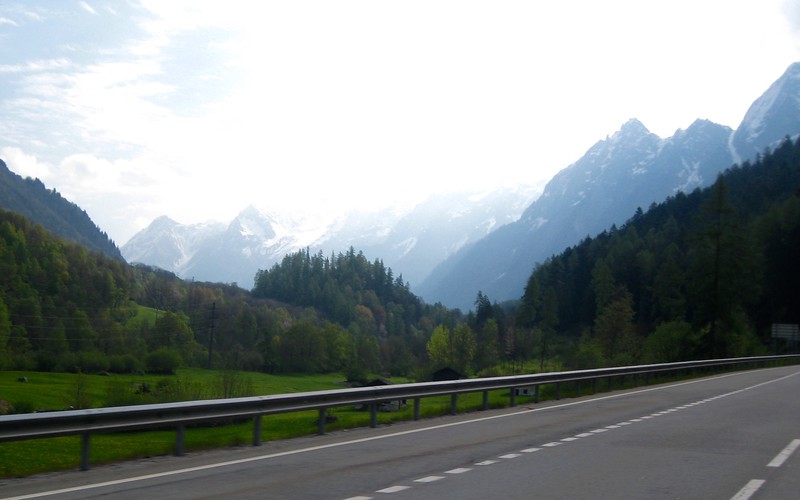 There was a lot more traffic today than when we arrived on Wednesday and we were “forced” to enjoy the scenery, even though I would have enjoyed keeping my new tires round by attacking the corners with a little more vigor. Oh well – I took more pictures and chatted with Dan as we climbed over Mojito Pass and followed the lake. 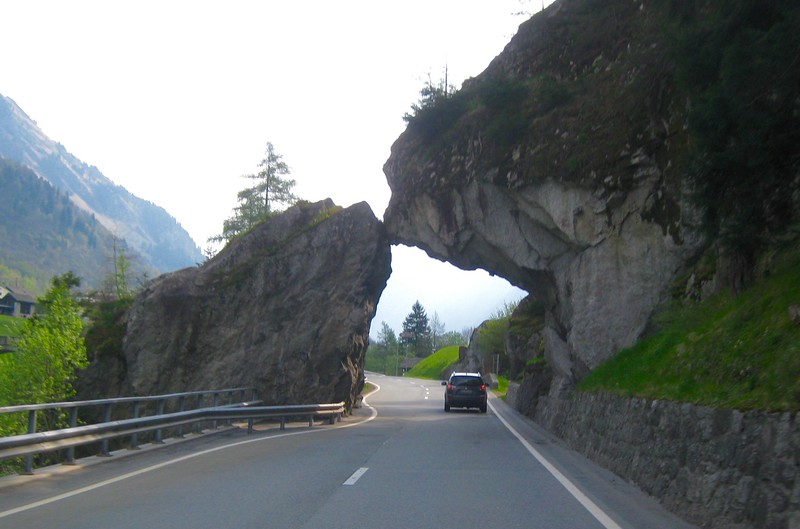 Looking down from Maloja pass

Julierpass was just as nice as before, but even warmer. Today the low was only 6C and barely even registered as “cold” as we crossed over. Unfortunately, the slowest driver from Germany was in front of us, keeping us from taking the corners as we would have liked. Even Dan complained. And the driver frustrated us even more by speeding up at any possible passing point, and then hitting the brakes as soon as he reached the corner. It wasn’t until we had left the pass behind us that we finally had the opportunity to get around him, and then just a few more kilometers later we came up to a construction traffic light. Ah, the frustrations of having to share the road with others.

Having a riding companion can be fun

There’s a steep side to every pass

Spring time in the valleys

I had a surprise stop planned on our route home. I let Dan guess what it was and he guessed incorrectly. However, I played it off so that he thought that he was right. Therefore he was still surprised when we stopped in the town of Filisur to see the famous Landwasser Viadukt. Sure, it wasn’t as cool as his original guess (an old war bunker that I had mentioned while still researching for this trip), but it was something that I had wanted to see, and since we were so close, I figured “what the heck!”

We parked the bikes at the train station, grabbed some food for lunch “on the trail” and headed off to find the panoramic viewpoint I had researched. The signs were poorly placed, but after a short detour we found the actual trail and the southern viewing platform. There were already three men there, standing on the platform that had been built to allow for a good, safe view across the valley. I was originally a little confused, as the photos I had seen online (and wanted to see in person) showed a train coming out of a tunnel and across a curved trestle. But this view showed only the curved trestle coming from the right and then following the far side of the valley wall. Then I saw another viewing platform on the far side. Ah ha! I was on the wrong side. Well, it was too late to change and besides, just then I could hear a train coming up the valley. As if on cue, all three men raised their cameras in anticipation. I joined them on the platform and also brought out my camera. 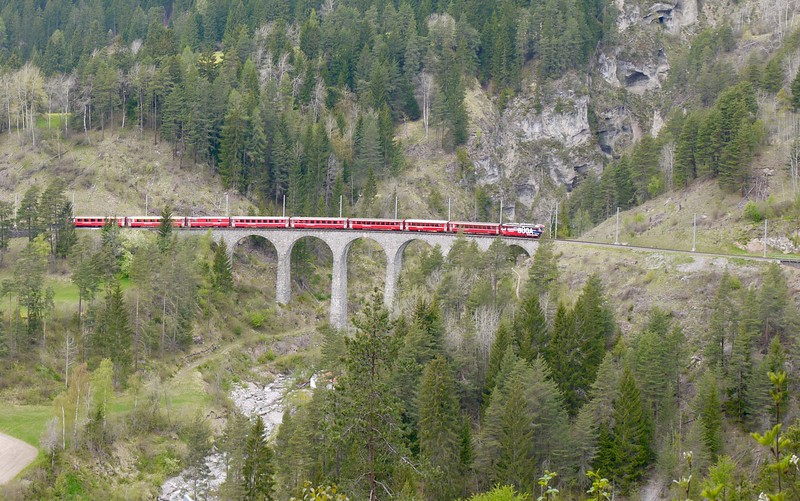 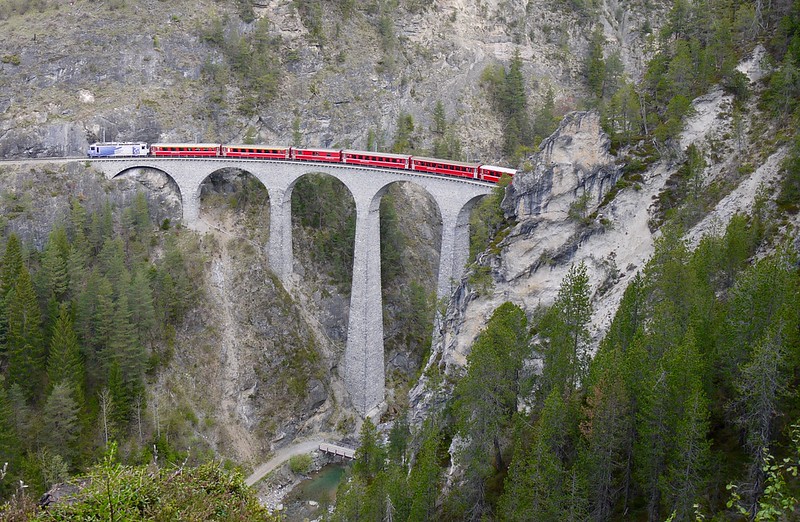 I snapped a few photos as the train rounded the bend and then disappeared out of sight. It wasn’t nearly as exciting as I had hoped. Dan and I turned and walked back down the path a short way to where we had seen a bench and proceeded to pull out our food and make sandwiches. It was relaxing, sitting in the forest and listening to the birds and the wind in the trees and feeling the breeze on my face. We were almost done eating when I heard a different sound. I listened for a moment and said to Dan “That´s a steam train!” I jumped up and walked quickly down the path, back to the viewing platform. The three men were still there, standing at the fence with their cameras in hand. I joined them on the platform once again and watched as the Rhätische Bahn steam train made its way along the far side of the valley. The whistle was sharp in the clear air and the dark smoke billowed out from the engine. This was much more interesting than the modern train I had seen shortly before. I took a short video, but for some reason, the video quality is complete crap. The sound is there, though! Ah, there is something special about a train whistle that I absolutely love to hear. 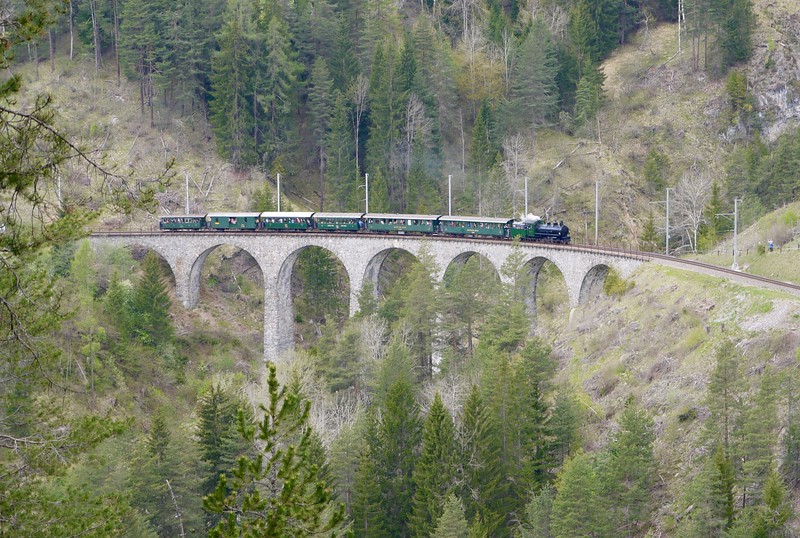 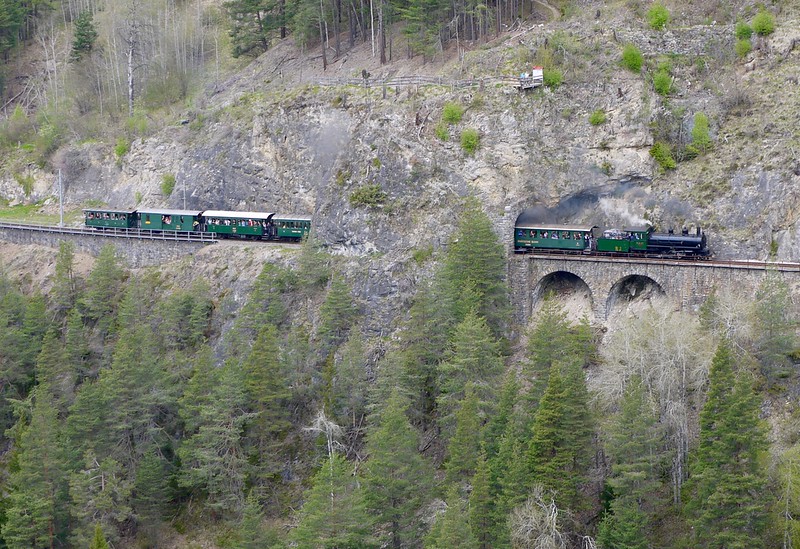 After getting home I went online and found the images that I had been expecting to see. I posted them here, just because I can.

View from the north side of the valley

We packed up our things and took the more direct trail back to the train station and our bikes. I stopped at the restroom while Dan went ahead to put our leftover food away and unlock our gear. I was a little surprised when I walked up and he was still hunched over the bike. He looked up at me: “We have a problem”. The cheap combination lock that we´d been using all weekend wouldn’t open. Dan tried it over and over, and tried minute adjustments to how the four digits were aligned, but all to no avail. I walked back to the main train station building where two women were selling food and refreshments and asked them if someone in the rail yard had bolt cutters. They made a phone call and said that they would check and let me know. Of course, all of this took a lot longer to actually communicate and do, but at least it was a start. I went back to the motorcycles and Dan, patient guy that he is, was still working at releasing our gear. At this point though he had given up on actually opening the lock and instead was focused on cutting the cable that burrowed through our jacket sleeves. It was wire cable – how hard could it be? Well, it turned out to be very hard and he worked at it for some time. He had his multi-tool and I eventually brought out my Leatherman. Between the two tools he was able to finally cut through the cable. And, as Murphy´s law would have it, that is the exact time that a maintenance man walked up with some sort of heavy duty cutters. I felt bad that his trip was for naught, but I was also glad that we were able to get to our gear off the bike. 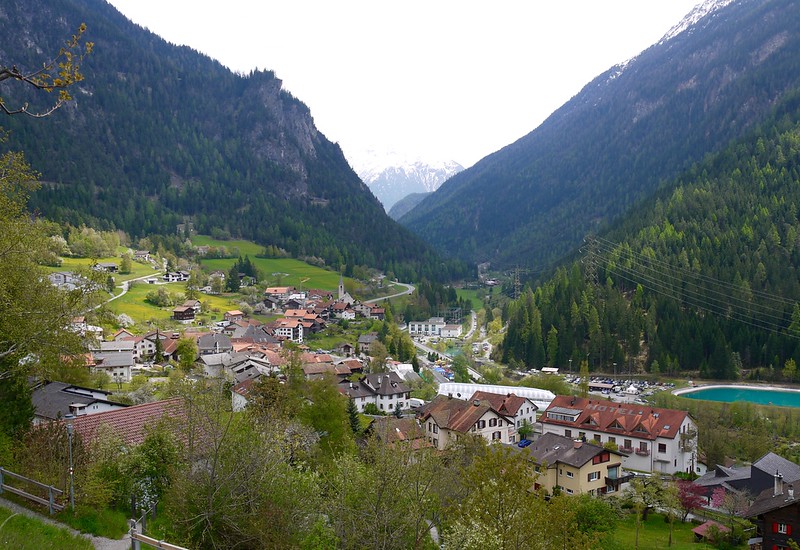 The town of Filisur, while I’m waiting 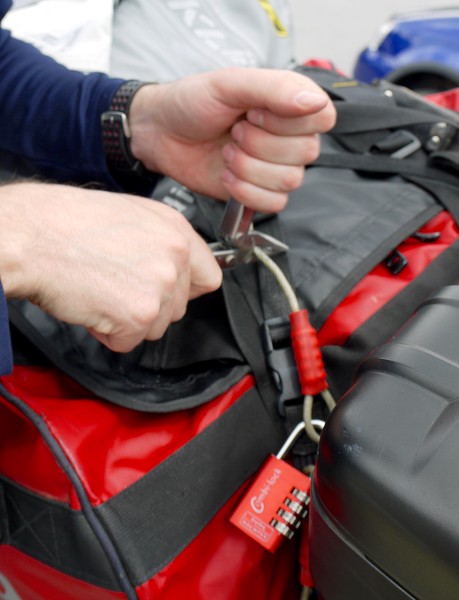 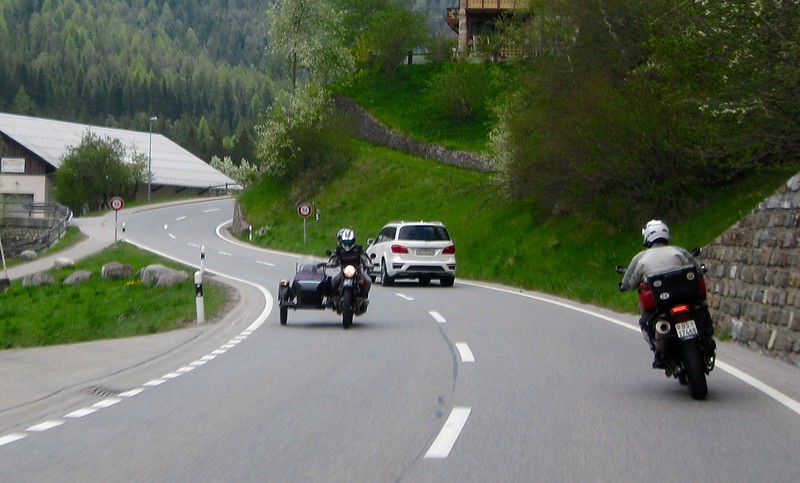 Whew! On the road again

Finally back on the road, we made our way to the main roads and the rest of the travelers making their way home from the long holiday. And not too surprising, that´s when the traffic started to back up. It was almost stop and go for a while, but I only had to put my foot down once. I suppose we could have passed along the center line like some other motorcyclists did, but with my panniers making my bike twice as wide, and the fact that we really were in no hurry, meant that we just waited with the rest of the vehicles. 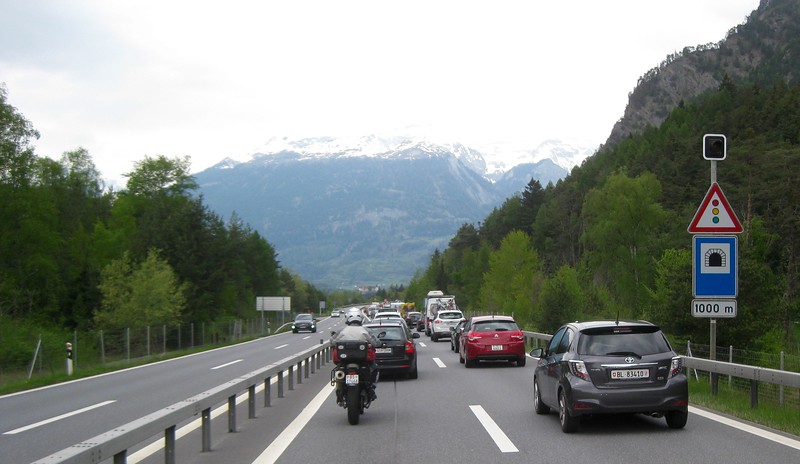 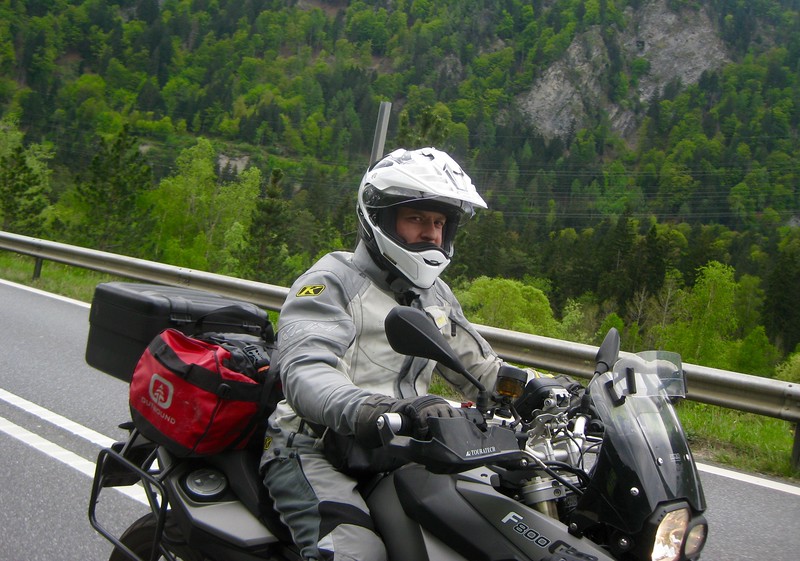 Eventually we were free to speed along towards home and we did. We passed by Zurichsee again, looking much better in the afternoon light. It really is amazing the difference between the eastern and western ends of the lake, with the big city of Zurich dominating the shoreline to the west. Sailboats were taking advantage of the perfect weather as well, adding yet another dimension to the scene. 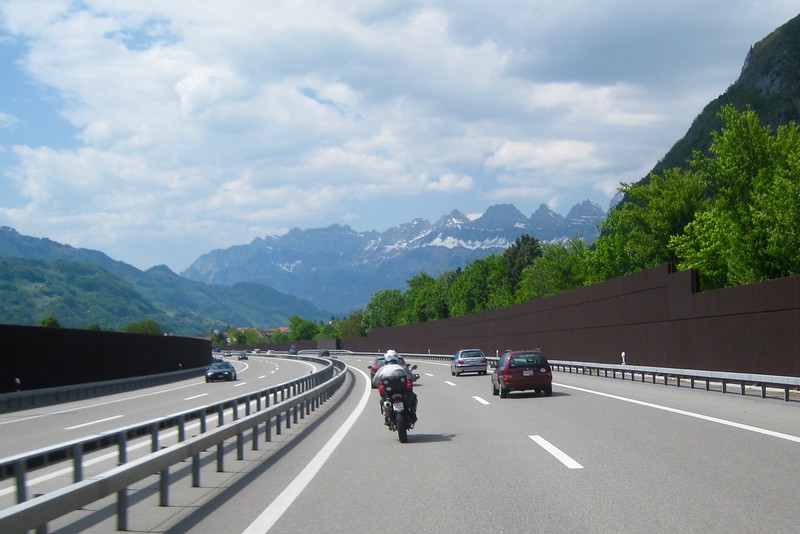 Even the motorways are beautiful 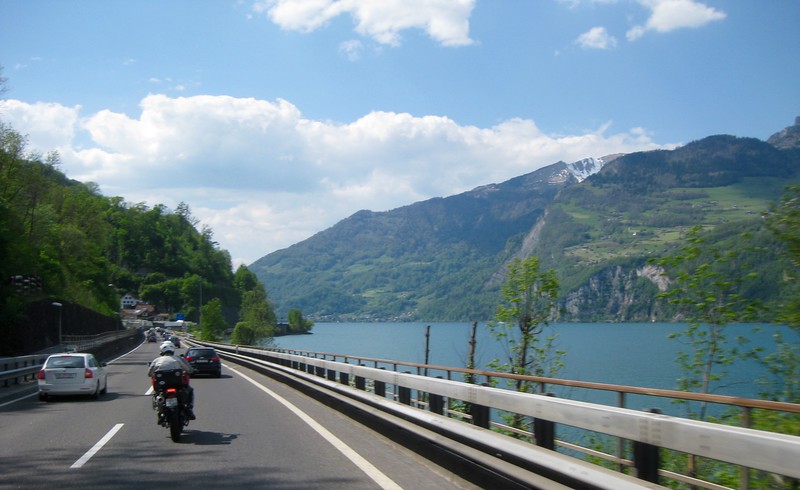 As we were leaving Zurich behind we came across yet another traffic jam, this one heading in the opposite direction. A serious-looking accident was at the head of it, with debris and cars scattered across all lanes – and even some small bits on our side of the central barrier. Further along we saw another accident scene, no doubt caused by reactions to the first one. There were three more accidents after this, which made me wonder: what is wrong with the drivers in Zurich?

Backed up as far as the eye could see

There wasn´t anything noteworthy on the rest of the ride into Basel. Traffic behaved nicely and we could maintain our speed just fine. We dropped our bags off at the apartment before returning the bikes to the garage. It was early afternoon, which meant that we had a few hours to unwind and unpack before our holiday really ended. Bella Italia!