Dan and I were invited to dinner at a friend’s house about a hour from Basel on Saturday night, and they were kind enough to extend the invitation to an overnight stay. This really opened up our options as to how we’d get there and how we’d get home. Dan made the decision to ride his bicycle, as it was the perfect distance (78 km) to really push himself and it was also supposed to be a very nice day. This, of course, left me open to ride my motorcycle. I was going to make a day of it.

Unfortunately for me (and you!) Dan was playing with the ISO on the Canon and I didn’t realize that he hadn’t returned it to the previous setting. Therefore, most of the “on the fly” shots were total crap. I kept a couple of them, just because I liked the subject matter, or they were tolerable. But fortunately I stopped a number of times throughout the day and pulled out the Lumix.

I had five hours to travel one hour’s distance. I decided to go north into the Black Forest. I figured that since there weren’t any leaves on the trees, I’d at least take advantage of the needles that blanketed the southern German hillsides (and yes, I know that needles are technically leaves). Not five minutes into my ride and I was stymied by traffic: the tunnel under the Rhine was closed. Instead of fighting my way through Basel on the surface streets, I decided to swing west and take advantage of the open roads of France. Why not? I had all day!

Crossing from France into Germany over the Rhine

Green fields and castles in the southern Black Forest

One of the first towns I came across was Badenweiler. It is spa town with ancient Roman bath ruins, as well as a more modern castle ruin. I took careful note of it, as it looked like a place I’d like to return to with Dan. 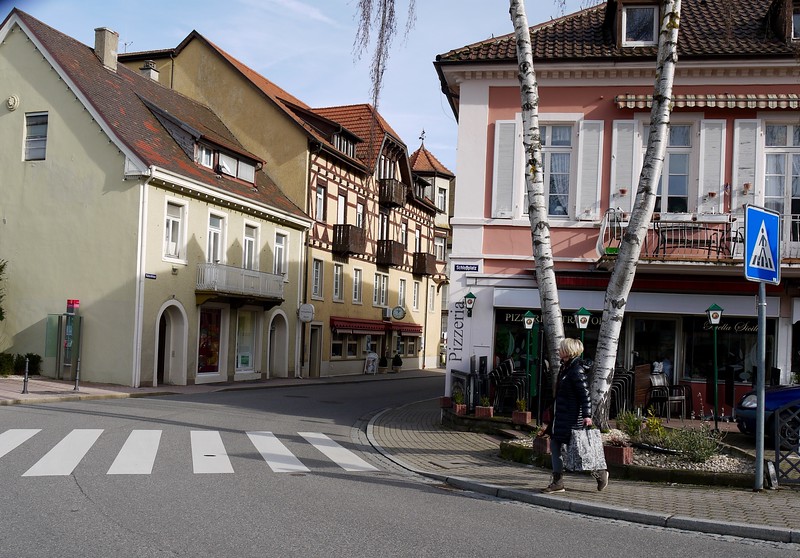 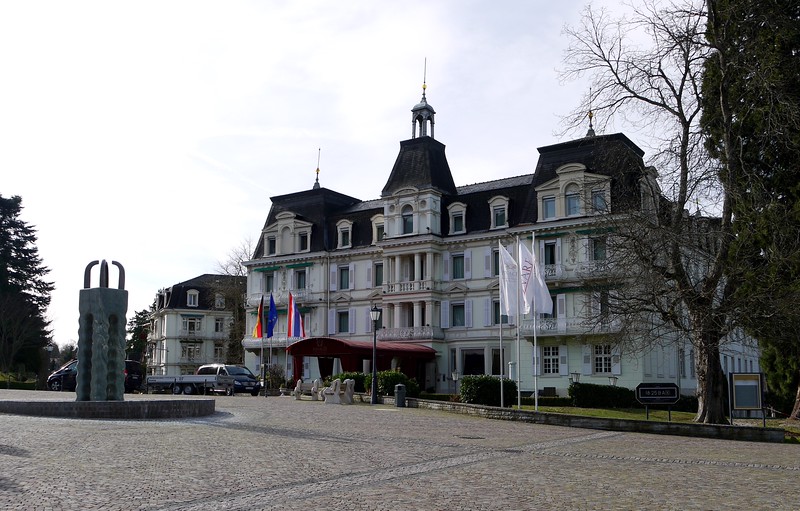 Most motorcyclists rave about the twisty, pine-sheltered roads of the Black Forest. Obviously they were not talking about this road. It was twisty, to be sure, but the pavement surface did not go well with sport bike cornering. I was happy to trundle along on my 800 and take in the sights. Besides, it was cold (7C/44F) and I didn’t need any more windchill to cool me off. 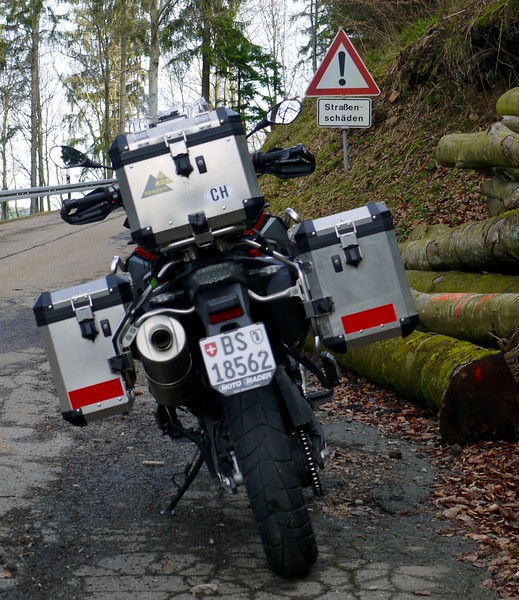 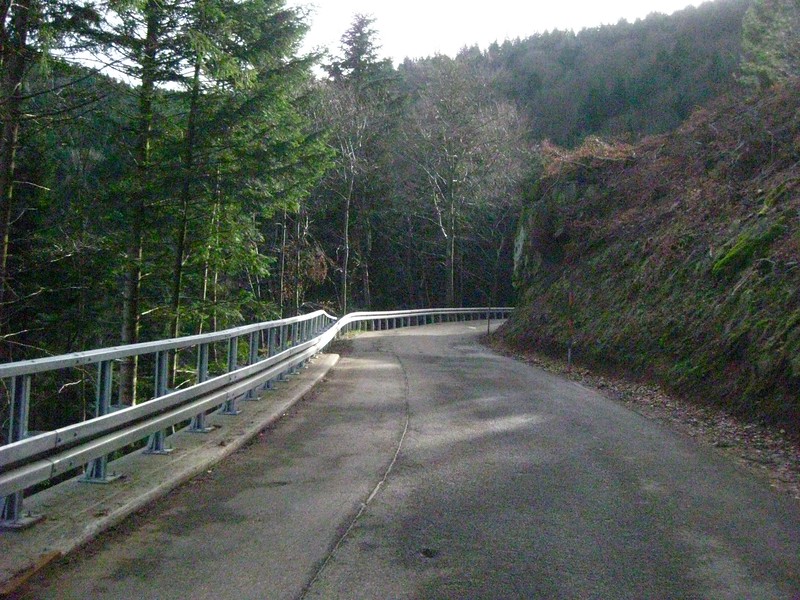 I wasn’t expecting a lot of snow, as someone I knew reported that he had gone to the local ski slopes a couple of weeks prior and found mostly mud. As we haven’t had good winter weather since then, there shouldn’t be anything on the streets to stop me. As it was, this is the most snow I saw the entire weekend: 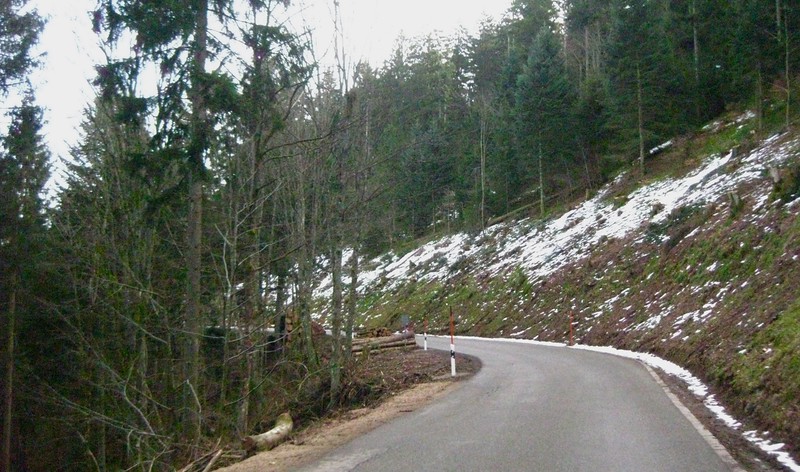 Well, expect for what I could see on the Alps, far south of me: 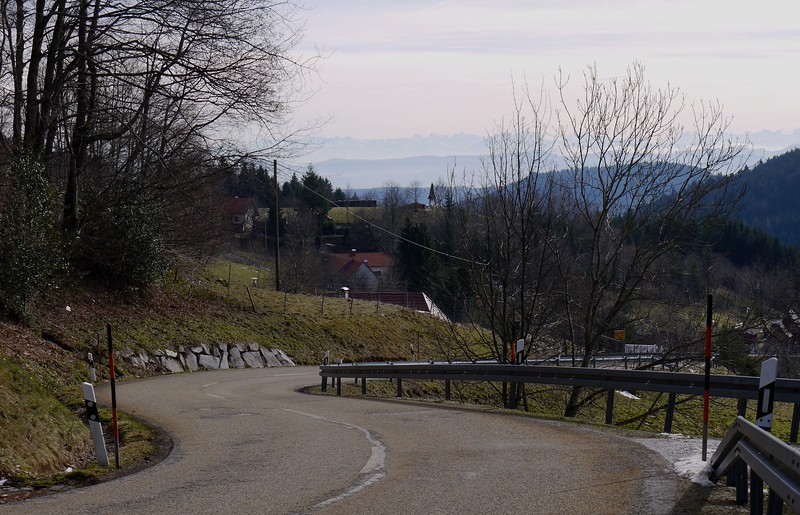 At one point I missed the turn in a small village. The GPS helpfully redirected me onto another road to get me back on track. Unfortunately, this choice merely led me into a muddy track in the woods – and a U-turn. This meant that I had to again ride past the woman standing with her cat, with me obviously not knowing what I was doing. As her cat had greatly intrigued me when I first rode by, I took advantage of the situation and stopped to ask if I could take the cat’s photo. It really was a large and odd-looking cat.

I was back on the good roads, the sun was still out and there was no one else in sight. It was a pleasant day to explore. And it only got better as the views to the south became more expansive.

I was relying heavily on the GPS. I had programmed my destination and was using the ETA time to calculate just how much more time I had to play before I needed to arrive. So far, so good. I had been on the road for just over two hours, and still had over two hours to go. I zoomed out on the GPS and made another waypoint choice. 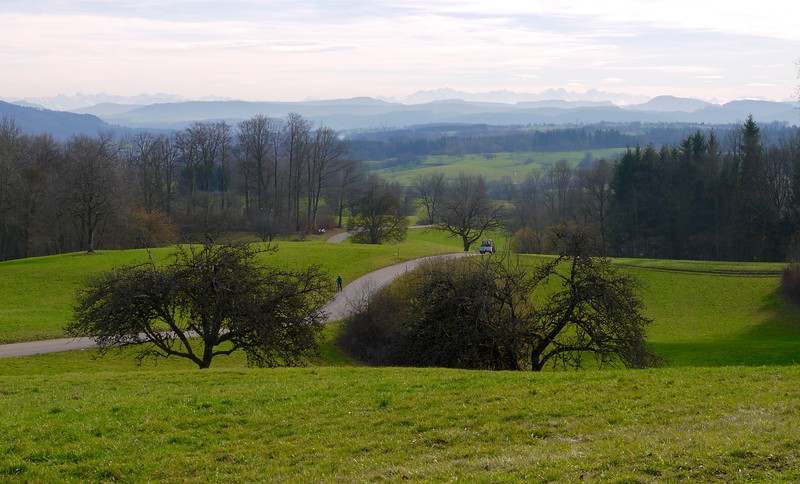 And its not even spring yet!

I made a quick stop in Schopfheim to pick up some wine for the evening. As I was packing the bottles into my panniers I heard the familiar sounds of Baseldeutsch. I looked up to see a man smiling broadly as he made his way across the lot towards me and my bike. I quickly explained that while I live in Basel, I am American and can only speak High German. He was accommodating to my limitations and we chatted happily for the next ten minutes about motorcycles, touring, Switzerland and Germany. His wife eventually came to gather him and we bid our good byes. Now, back to the road! 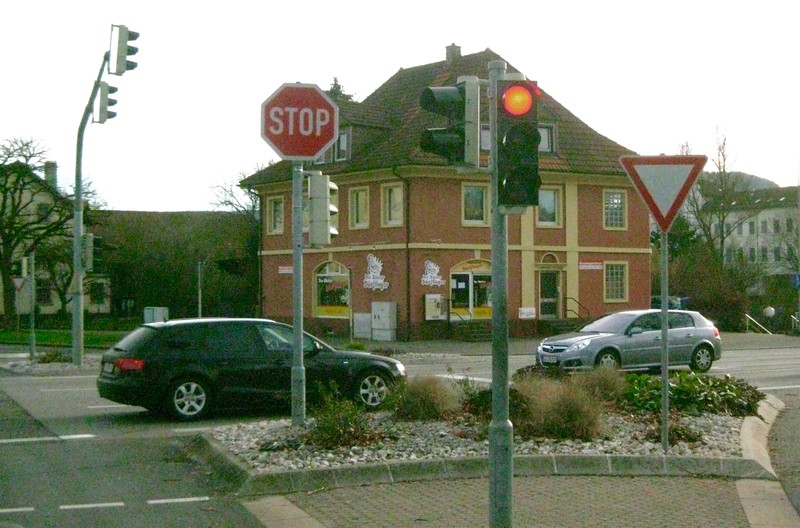 But first: what to do here?

Upon reflection, I didn’t dally too long in getting to my destination. I knew that Dan would be stuck in his bicycle clothes until I arrived with the change he had packed. I took some great little roads in Switzerland for the last few kilometers, and arrived just minutes before Dan did. It was time for some traditional (?) Swiss smoked ribs! 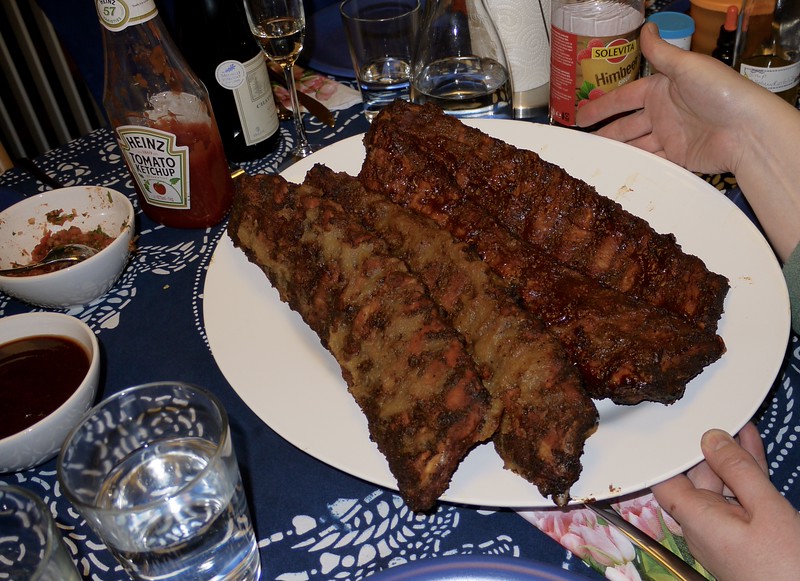 This is a much shorter report. The weather had taken a turn for the worse overnight: it was only 3.5C (38F) and rain was in the forecast. I repeated some of the nicer roads near to Seon, and then asked the GPS to take me home in a most non-direct route (while still staying in the country). 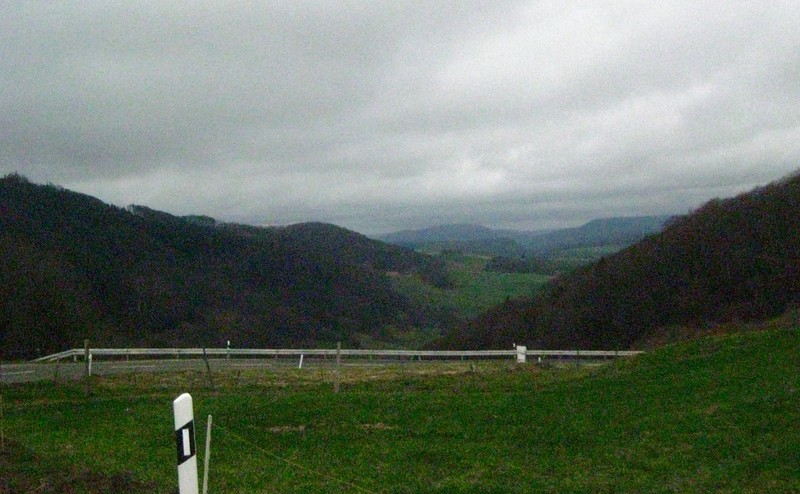 With hills like these, construction is bound to happen

Shortly after this, with an hour to go via “curvy roads”, it started to rain. I made a quick adjustment to “faster time” and was home in 30 minutes. Good thing, too, as the rain had picked up considerably and not only my waterproof Klim gear was getting tested, but also my Gerbings heated jacket!