Well, it is done. And while it was technically a successful transport, I can’t say that it was the most pleasant motorcycle ride I’ve ever taken. It was, however, one of the more interesting ones!

It started a couple of weeks ago: someone on the ex-pats’ website was complaining about the high cost of motorcycle transport. He had just bought a bike from a man in Geneva, but needed to get it to Zurich. As the buyer (we’ll call him Josef) was a new rider, he did not feel comfortable making such a long journey himself. Having some time and inclination myself, I posted that I would ride it there for him. Much to my surprise, he sent me a message! We have never met, nor even conversed online, but he clicked on my website and saw that I knew a thing or two about motorcycles. We began the process of planning…

This would be the fourth time I’ve transported a motorcycle for someone. The first time was for a friend who needed his BMW RT moved from Irvine to Seattle, then a VFR from Reno to Seattle, and then finally a little sport bike from the Seattle area to Eureka. It was always fun to know that I was helping someone, while at the same time getting a bonus motorcycle ride on a different machine. This would be another chance!

Plans were finalized and the weather was looking good – for mid March, anyway. Let’s get this party started!

Friday started at 8:45, when I caught the tram to the train station. I took the train from Basel –> Bern  –> Geneva, arriving around 12:20. I knew that I had time to kill before the seller would be home to greet me, so I started to wander around Geneva. It was a beautiful but cold day. I’d never been to Geneva before, so I was looking forward to seeing something new!

But most of the shops I saw were the same shops I knew of in Basel, and I couldn’t find a nice restaurant in my short walk. I suddenly didn’t care about Geneva when my CBTs started to rub on my heel. Now I remember why I don’t wear these boots as much any more…

A quick check of my phone and an email informed me that the seller would be late, so I could go at any time and his wife would give me the keys instead. Perfect! I hailed the next cab I saw and jumped in, handing him the address on a sheet of paper.

I asked him “Do you speak English or German?” and he shook his head. Needless to say, it was a quiet drive to the seller’s house.

The seller’s wife didn’t know much about the bike, but she was pleasant and we chatted while I geared up and adjusted the mirrors. The seller had been excited to buy the bike, but I guess the new house was taking priority on the bank account. Plus, he had put only 1,150 km on it!!

I somehow managed to not get lost in Geneva and decided to just take the motorway as far as Lausanne. I so wish that it had been warmer, the daylight longer, and that I didn’t have dinner guests coming at 7:00 pm. I haven’t ridden this far south and had been looking forward to some exploration…

The headwinds were a beast. Based on the flags I frequently saw, the winds were easily over 50kph (30mph). Add this to the 120kph I was traveling and that’s a lot of headwind!!! I ordinarily would have ditched the motorway for the slower backroads, but without the GPS and no real knowledge of the geography in this corner of the country, I was concerned about getting lost and being late for dinner. So I stuck to the boring motorways.

I realized at the seller’s house that there is no gas gauge and the tripmeter hadn’t been reset lately, so I started to look around for a station to make sure that things were topped off. This is where it would have been nice to have met with the seller, because then he could have shown me the little trick on how to open the gas cap. As it was, I used one of the three (!) keys and tried to open the cap. No joy: the cap just kept spinning around and around. I tried to press down like one would open an aspirin bottle – no luck. I gave up and kept on riding, thinking that I might find a motoshop to ask at, since I figured that it was just something stupid I was overlooking.

The wind and the cold was taking its toll, so I stopped at an Autogrill food/fuel exit. After a less-than-stellar pizza, I rode over to the gas station. I still couldn’t get the cap off and I asked the attendant. He tried it as well (with no luck), so I got on the phone to call the seller, but he didn’t answer. Hmmmm. This was frustrating, because I knew that it should just spin open! I spoke with Dan as well and then kept on riding down the road. The fuel light hadn’t come on yet, so I wasn’t in too much trouble!

I stopped again in Biel, as the fuel light had come on and it was time to sort out this whole “fuel cap” thing. I checked my phone quick and saw that Dan had sent me a text conversation. “Turn the cap counter-clockwise and then push down like you would for an aspirin cap”. Gee thanks – I’ve already tried that. So I tried it again and it work. WTF?  Ok, whatever. It was late and it was cold and I could fill the tank.

Earlier in the ride I consoled myself with the drone of the motorway with the thought that once I got far enough north, I could take the backroads that I know, without concern of getting lost. Unfortunately, it was now getting too late to dawdle any more and I continued with the fast roads. Traffic backed up a couple of time (a complete stop – twice!) and I resorted to lane splitting for a while.

After 3 hours (250km) with the effective windchill of 0C/32F, I was done. I parked the bike in our garage and went in for a hearty raclette dinner with our friend. Tomorrow would be better!!!

As a side note, it should be understood that Switzerland provides a piece of grey paper that indicates ownership of a motorcycle. The tricky part of this is that anyone in possession of this paper can claim ownership. No signatures or bill of sale required. This is why you never leave this paper on the bike itself. Therefore, as Dan and I sat on the couch Friday night I pulled out the little grey piece of paper that the seller’s wife had given me (Just in case there was an issue on the ride from Geneva) and said to Dan: “Hey look! I own a Triumph Scrambler!!!”

Saturday. I was going to take the long way to Zurich and finally see if this bike could corner. The few on/off ramps I experienced overwhelmingly said “Yes!!!” but really wanted to take it a step further. There were some delightful roads I had been on recently that would be the perfect stage for Part II.

Dan had his own plans. His friend Ian was selling his 650GS but no longer held a valid motorcycle permit. Dan had offered to ride the bike to the dealership and Ian would give him a ride home from there. Dan was also hoping to buy some new moto pants and seemed sad that I wouldn’t be there to help him out. So I made the concession that I would ride with him to the dealership and from there I would make my way to Zurich. After all, who can turn down a trip to one of the biggest and best moto shops in the country?

I took some photos of the bike while waiting for Dan and Ian to get the BMW ready for the trip to the dealer.. 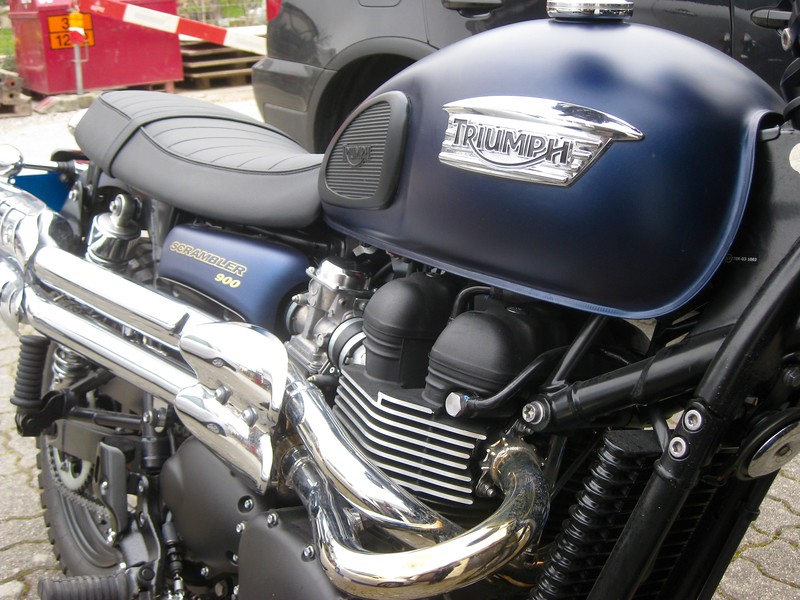 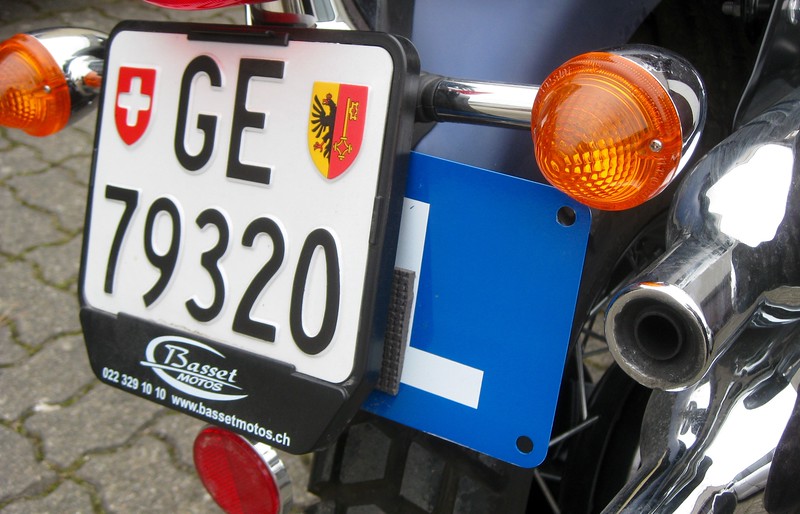 Whoops! Me, riding around with an “L” plate

My last-minute plan to find the buyer’s house in Zurich called for some seriously ghetto jury-rigging. The Zumo 550 was dead and since I wasn’t about to rig up the wiring to someone else’s bike, I had to do something else. So I grabbed the Navigator off my BMW and banded it to the Zumo’s mount. Looked like crap, but it would work  😀 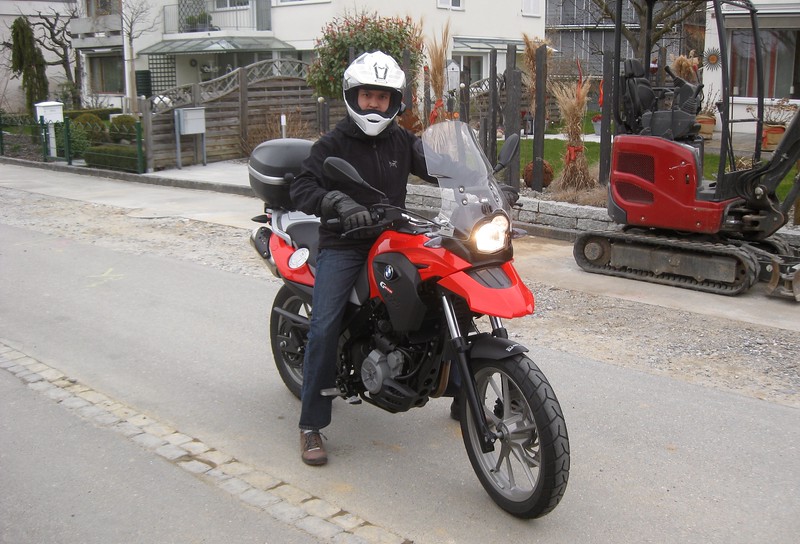 Did I mention that it was cold? It was colder than yesterday’s ride. The damp chill went through my gloves, through my jacket, through the plentiful vents in my helmet. Brrrr. At least Dan was with me and we could chatter away on the Senas, but still…. it was 6C/42F and again on the motorway. I’m getting pretty sick of this motorway crap. I would say that I couldn’t feel my fingers when we got to the shop (45 minute ride), but they were so damn cold I could feel them to an almost painful degree (pun not intended) 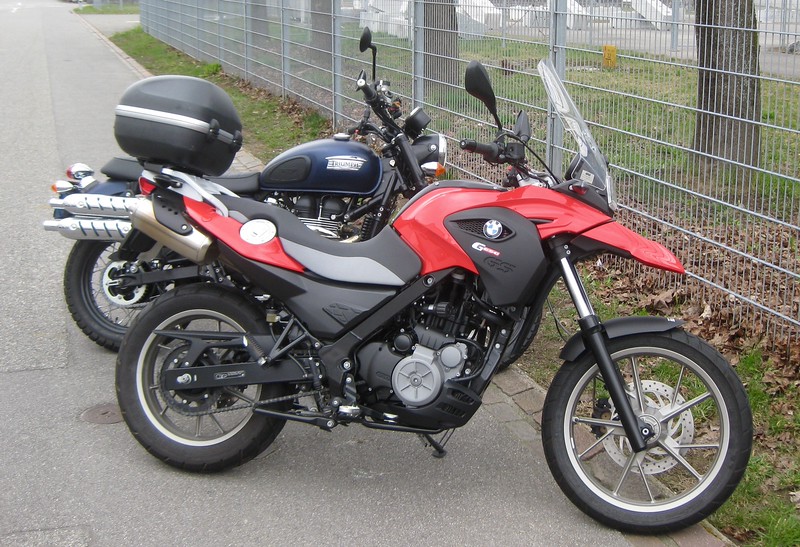 Two “Professionally Transported” motorcycles – Dan couldn’t get over how small the 650 felt!

Ah… MotoMader. It is a great shop, and not just because that’s where my F800 came from. There is a vast selection of motorcycles for sale, an entire floor of gear, another floor of accessories… and today they had their grill lit, so it was brat time!

It was time to go to Zurich. The idea of a romp through the countryside had been frozen on the morning’s ride. The guys were going to drive back to Basel, but we tossed around the idea of them coming with me for the final drop off of the bike. After all, Ian had to drive Dan back to Basel anyway, so why not drive a little further and then he could drop both of us off? And besides, who doesn’t love the sight of someone getting their First Bike? The glistening eyes? The ear-to-ear grin? It was decided: we’d all go to Zurich together, with me following Ian so I didn’t have to use my Ghetto Place Searcher.

Ok, another 20 minutes and we were there. Josef came down to let me into the garage. There, I handed over the keys and the little grey piece of paper – much to his relief. He actually had a bit of concern when he heard that it had been given to me. After all, I could have just visited the local MFK office and had them put the bike in my name.

So that was it: the Big Bike Transportation of 2016. Not nearly as exciting as I would have liked it, but the end result was really all that mattered. And the new owner has promised to send me updates.