We would be in Aviemore by nightfall, but we had all day to get there. We retraced our steps toward Fort William, the morning sunshine giving us yet another great day. 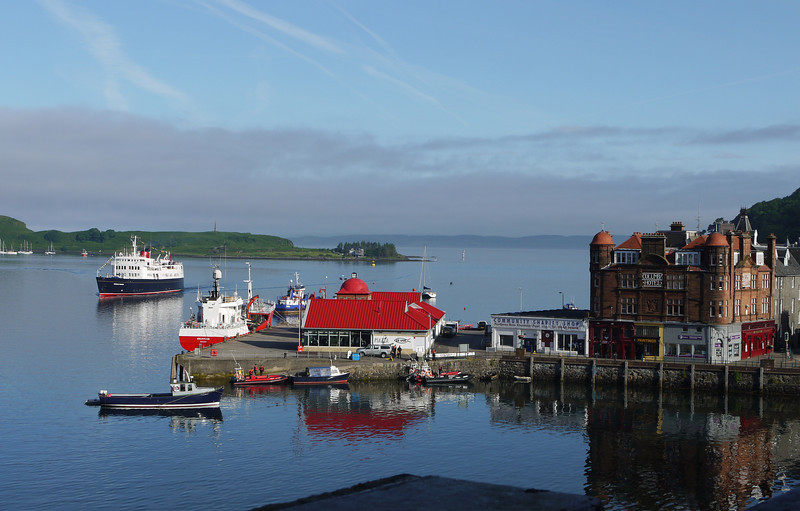 Morning view from our room in Oban Then took a detour from the main road to another ferry, this one crossing to Corran. The ferry was unique to me in the angled design of the car ramps. Instead of driving straight off/on the ferry, the ramps were angled to create about a 45 degree drive onto the deck. The need for this was illustrated when we approached the far side of Loch Linnhe: the concrete ramp was much too long and shallow to allow the ferry itself access. By having the boat’s ramps at an angle, the ferry could essentially dock along side the ramp and then lower its own ramps to meet the concrete. A clever, if not unusual, design. View from the ferry, looking at the raised ramp From Corran we took a lightly-traveled road north, paralleling the loch until were across from Fort William. We saw little else than sheep and mussel farms and about three cars. To say that it was a remote stretch of road would be an understatement. Then the road took a sharp turn west, cutting straight across the land until we reached water again. It was slow going and we were getting hungry. We had found it difficult on this trip to find food outside of large towns, so we were thrilled to see a sign for the Glenfinnen Station Museum Dining Car with an “Open!” sign. We pulled into the peculiarly empty parking area and quietly looked inside the dining car. A couple were just saying good bye to the host/waiter/cook, so at least we knew that there would be food available. We took a seat at one of the tables and looked over the menu. It was a simple menu with a good selection and we made our decision quickly. I looked around the dining car while Dan read up on “How to Speak Gaelic”, one of the many books on a shelf free for browsing. The overhead baggage racks were crammed with vintage cases and boxes, adding to the classic air of the 1950’s rail car.

As we sat inside the car eating our meal, a jet roared by. Then another. Once again, they were too fast to catch with the camera. And then the steam train pulled into the station. At first I thought it would just be a quick stop to pick up/drop off some passengers, but then the passengers kept on coming. The entire train’s contents poured down from the platform and started to mill around the parking lot where our little car sat. Some came into the dining car, some just wandered around the outside of it and some stood around in the parking lot or headed to the museum. Our quiet little lunch just became “eating at the zoo” – and we were one of the attractions. People stood outside our dining car window and looked in while we finished our meal. Even trying to back the car out of the lot was a circus as old men with sandals and socks pulled up to their knees and cameras hanging around their necks stood around. It was a pleasure to get back on the road. The kitchen at the back of the car The view outside our window

We didn’t reach the town of Mullaig until almost noon. We pulled up to the Mallaig-Armadale ferry, hoping that it wouldn’t be a long wait. The ferry worker approached our car and asked if we had reservations.

Reservations? No, I hadn’t even considered making reservations. The ferry worker informed us that the ferry was sold out, but we could pull in behind the three cars already in the stand-by lane. We had nothing to lose, so we parked the car and went inside for our tickets. The worse that would happen is that we’d have to wait for the 1:15 sailing.

The ferry discharged its current cargo and we watched the new vehicles enter. Very few motorcycles came off and even fewer rode on. The lanes of cars loaded and then the first car in our stand-by lane. Then the second car…the third car…and us! The car behind us loaded too, so I guess there was a bit more space than they thought. Scooter gang on the ferry – and the Lemon! Pulling in to Armadale Did I mention what a beautiful day it was?

We didn’t have a lot of time to explore the entire Isle of Skye so we consulted our map and decided to do the “western loop” as it was shorter and we guessed that maybe seeing the western shore might be more interesting. We headed north, then west. We saw a lot of wide open green spaces and not a lot else. We both questioned the “draw” of Isle of Skye, as it didn’t seem that much better than anything else we’d seen. But maybe that was it: we’d already seen so much of beautiful Scotland that this was just more of the same. So I leave you with some pictures: We drove almost all of the way out to the coast and the town of Dunvegan before heading north and then returning east. What we saw was beautiful but it was the sort of beauty that was enjoyable from inside the car. Our route took us on a wide loop and soon enough we had rejoined the road from earlier in the afternoon. Instead of heading south back to the ferry we stayed east and eventually crossed over the Skye Bridge.

The road closely followed the shore of Loch Alsh but then I took a turn north, pulling sharply away from the water and immediately up into the hills. Loch Alsh in the distance

After wending our way up and over some large hills we were high over Loch Carron, looking down at the brilliant blue water. We had to stop to enjoy the view. The roads today were for the most part fast. Sometimes they were narrow and winding but they were all interesting. Not more than twenty minutes later we zipped passed a sign for the Attadale Gardens. I slowed down as we discussed if we should stop, and once we decided to stop it took another few minutes to find a safe place to turn around.

It was late in the day and no one was at the entrance booth. We seemed to be making a habit of visiting attractions after hours, which is fine by me: I appreciated the emptiness of the surroundings. We left the Lemon in the parking lot and walked past the empty pay stand. The grounds were extensive, with paths winding through twenty acres of forests, gardens and ponds. The map we picked up told us that we’d find “surprise sculptures” around the gardens in addition to the different garden types. We finally found a way to pay Private house on the grounds We eventually returned to the car; we were done sightseeing but we still had a few hours before we’d be back at the cottage. The roads were fast through wide valleys and pass blue lochs. We eventually joined up with the road to Inverness and then it was just a hop, skip and a jump to Aviemore. It had been a very full two days and it felt good to be “home”.