Not one to be left behind, this is the bike that I picked up just weeks before my trip to Alaska. The Kawasaki KLR 650 is considered a dual sport because of its gearing (lower gearing for more room before shifting) and suspension (longer than standard in order to absorb bumps and potholes). It is really good at getting me around town, not to mention riding through construction sites, dirt tracks through the wilderness and river crossings. This bike is a workhorse! I have since put some large metal saddle bags on it and it is my “grocery-getter” and daily commuter. It’s light, affordable to maintain and gets 57mpg. There’s not a whole lot of power in that single cylinder, but its enough to get me where I want to go in a decent amount of time. On the way to the Arctic Ocean 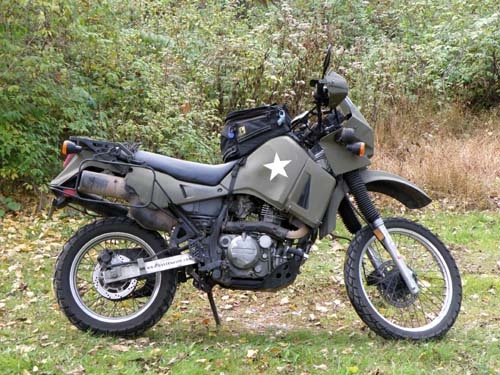 After the paint job

I love my KLR. I love it so much that I had to get a second one. Actually, it was a rather spur-of-the-moment thing. Somewhere, in the back of my mind, I wondered what I’d do the day my Green Mule finally gave up and died. I knew that I’d get another KLR, of course, but then I’d be under the gun. Therefore, when a screaming deal on an ’01 popped up, I bought it. So while I don’t have any time constraints I’m going through it and making it “mine”.

“As is” after I got my hands on it

Sadly, after many years of ownership I had to sell the bike. I still miss it, years later. I wrote an Homage to the KLR, so that I could always remember the fun times I had with that bike.