It was my day off, and after seriously neglecting my motorcycle for most of the summer, I decided to treat myself to a day out in the mountains. I got up early (well, my usual work time) and headed out.

As not much happened during this ride, I’ll just leave it full of photos and captions.

Riding through the neighborhood

After half an hour on the motorway, I changed the fast roads for fun roads 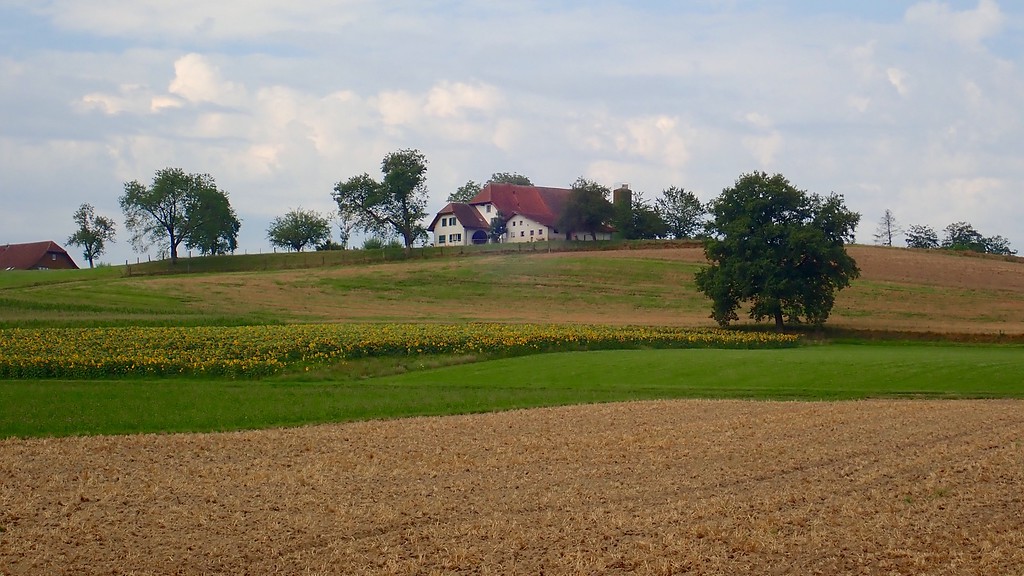 Free-range chickens! The eggs we buy have a code stamped on them that tells me exactly which farm they came from 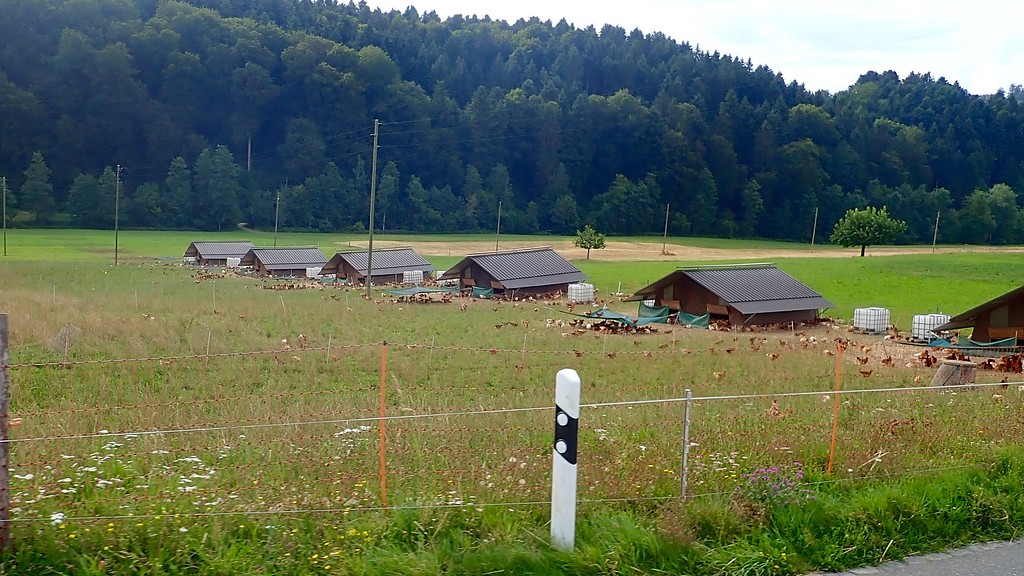 Getting closer to Luzern 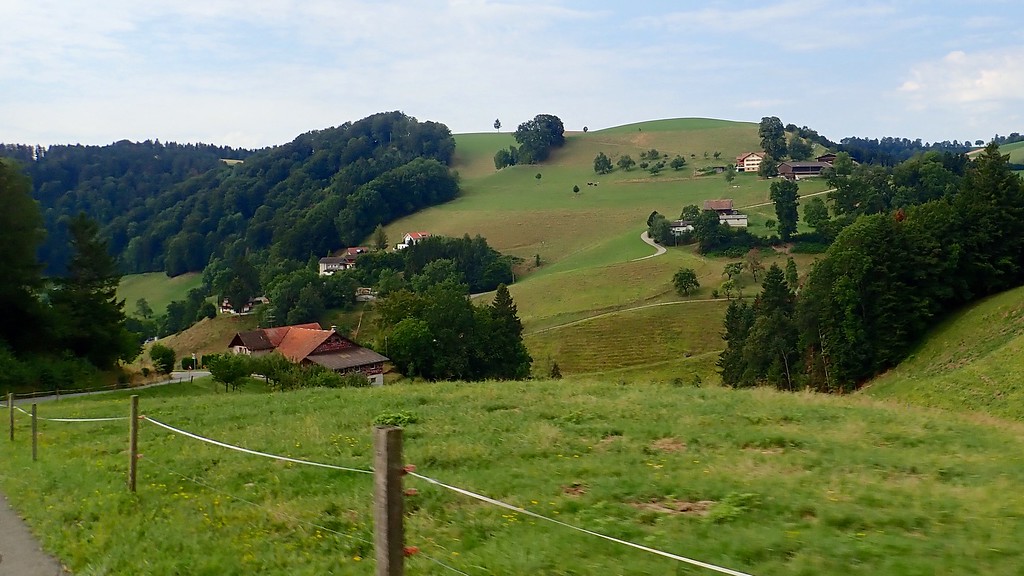 Looking back down the valley

A Swiss fighter jet flew over at this point (too fast for me to get the camera aimed properly, of course) 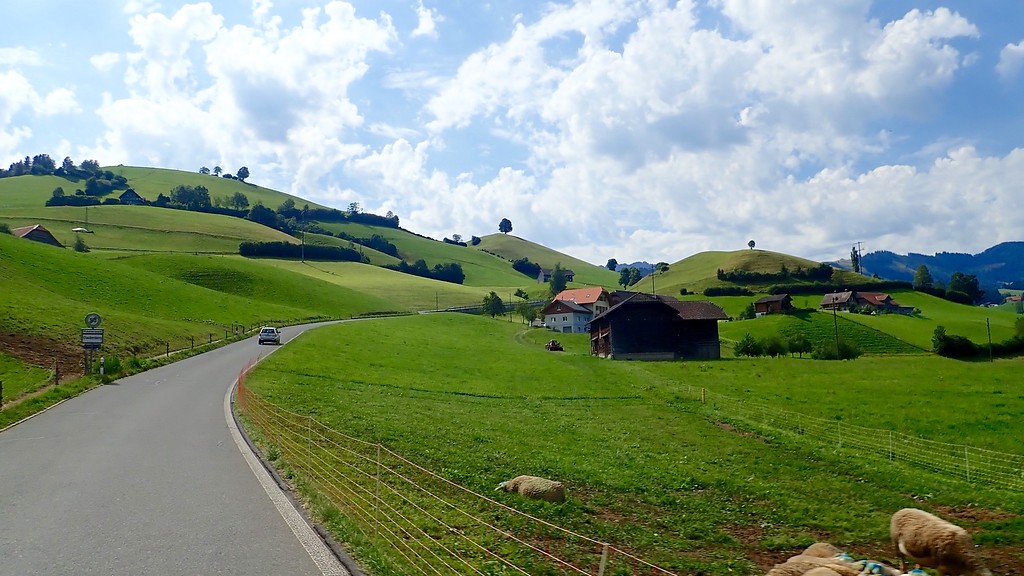 Heading up Glaubenbergpass – which I’d also never heard of before

The view – with cattle guards every couple of kilometers, of course

Another group of Swiss guys doing their military service 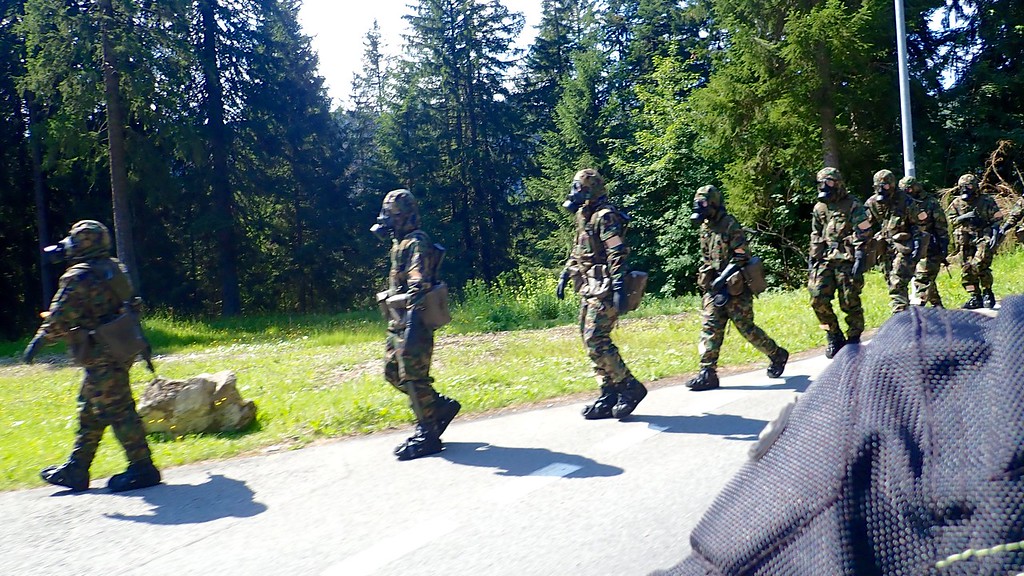 The other side of Glaubenberg pass was really nice 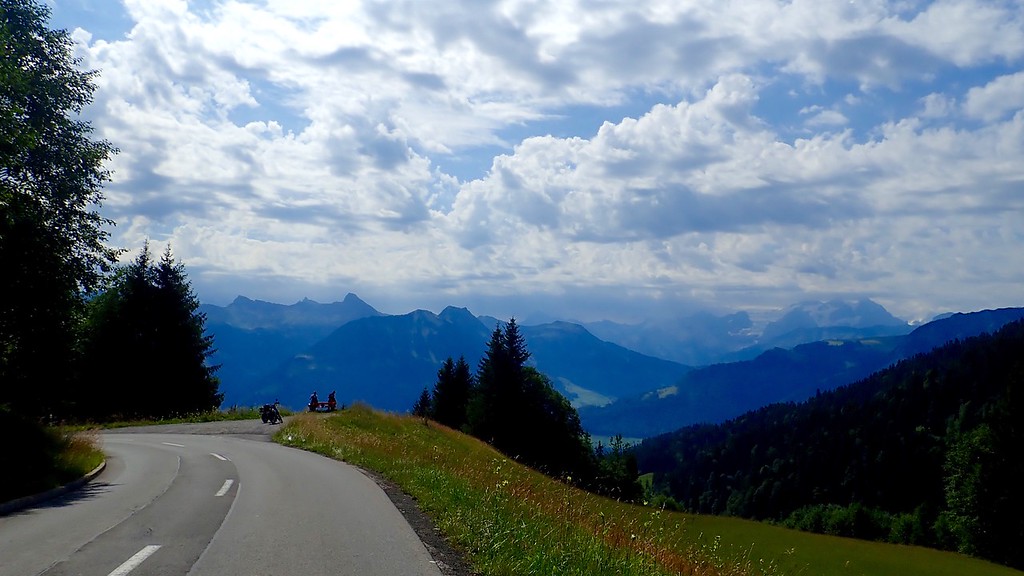 I was too busy taking photos, so I waved this guy by 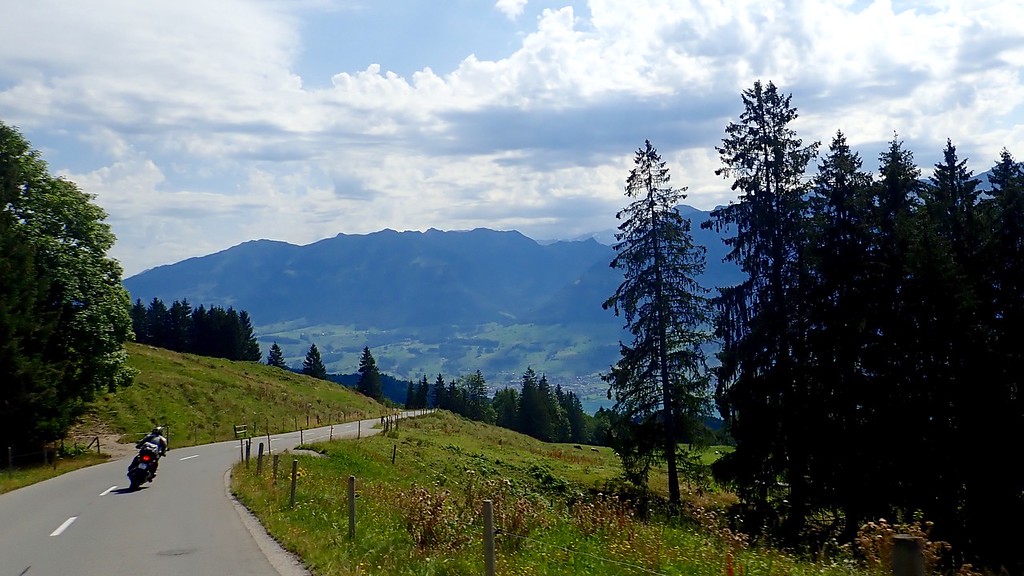 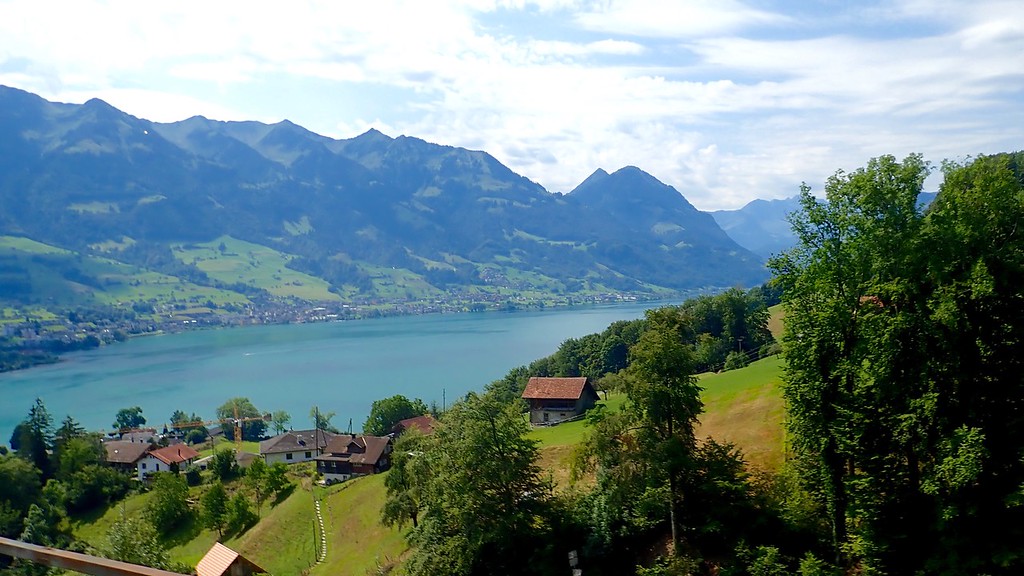 One of many little villages 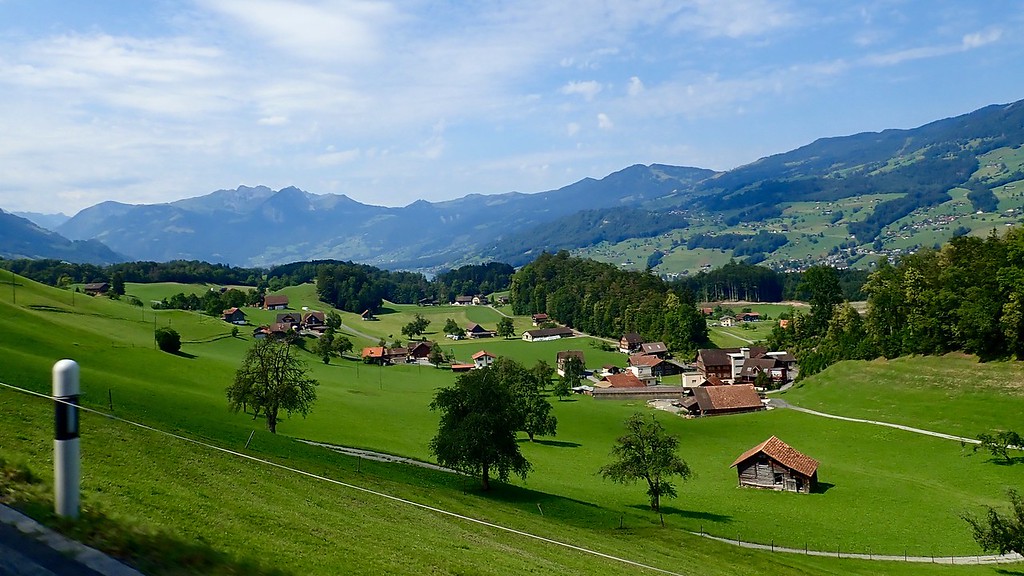 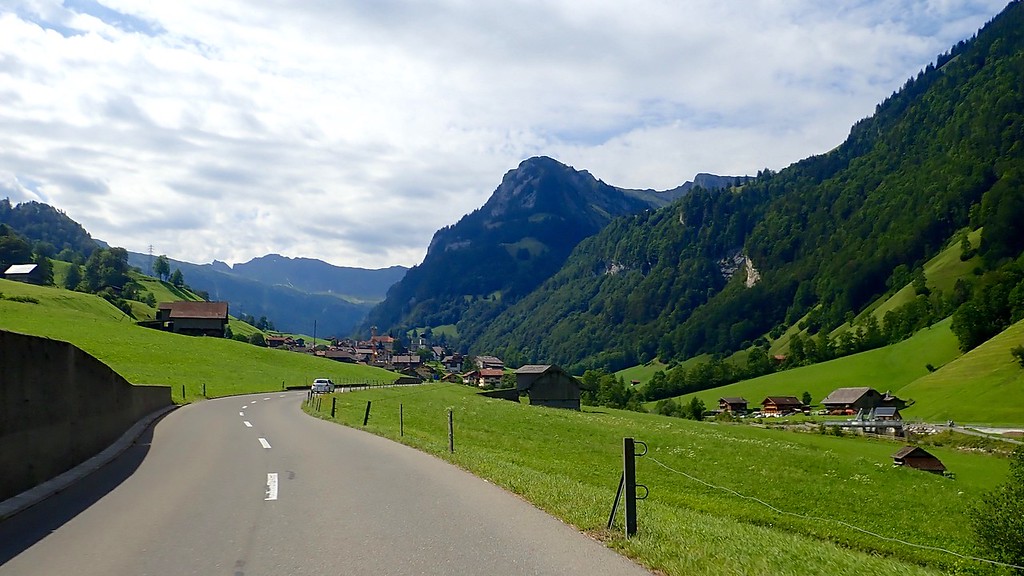 Ok, this is where it got weird.
I had reached the Melchtal Stöckalp, which included a massive parking lot, cable car station and restaurant area. The signs were not terribly clear and after pausing to get my bearings, I ended up following a couple of cars to an unmanned barrier gate. I dutifully got my ticket, not terribly surprised that there would be a fee to take this road. I had been on a few other in/out roads and the cost was always minimal. After the gate I followed a pleasant Austrian car who let me by and started up a narrow road.

The road was narrow and covered in pea gravel outside of the tire tracks. It did not inspire confidence to speed, but it was too beautiful for me to care about that. 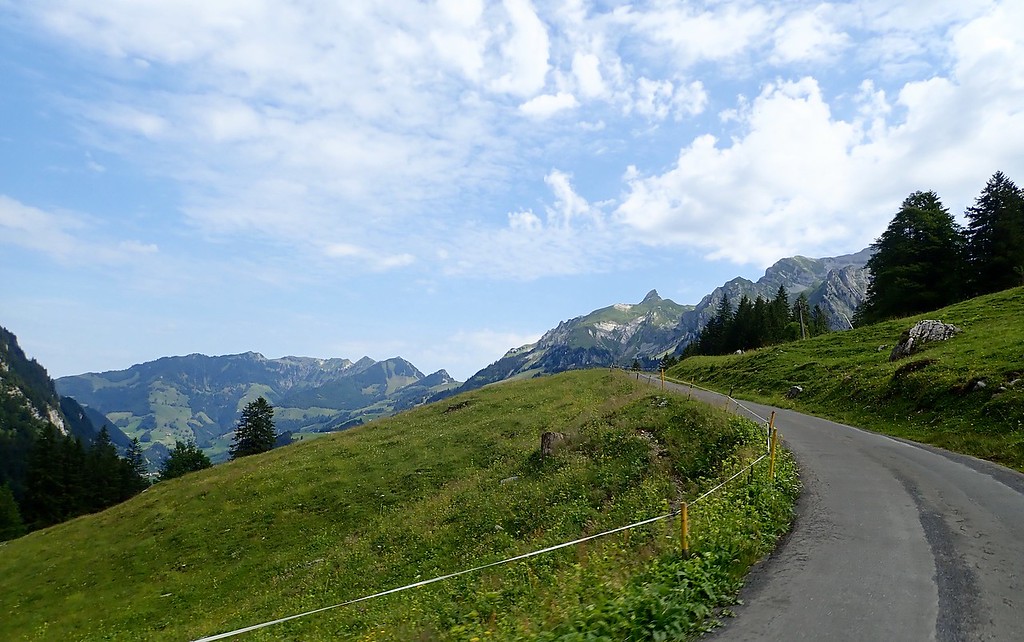 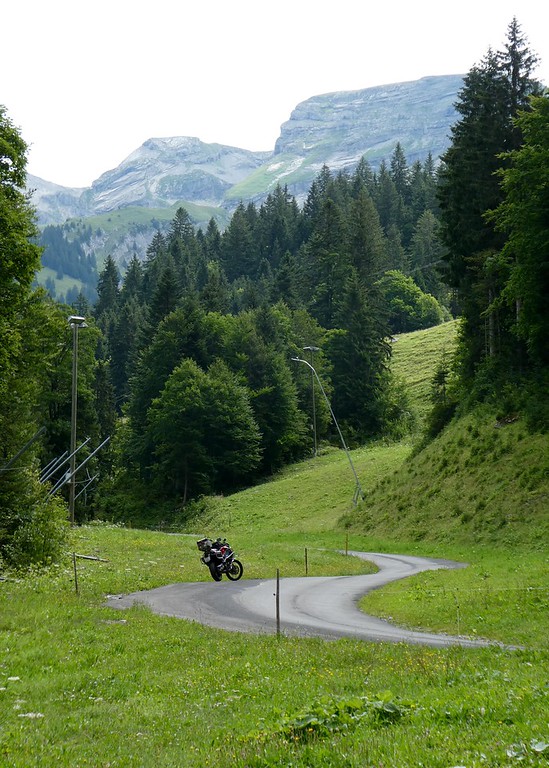 I made a brief stop at a chapel to check it – and the scenery – out for a bit. There were a couple of young cows nearby, too, who found me very interesting. 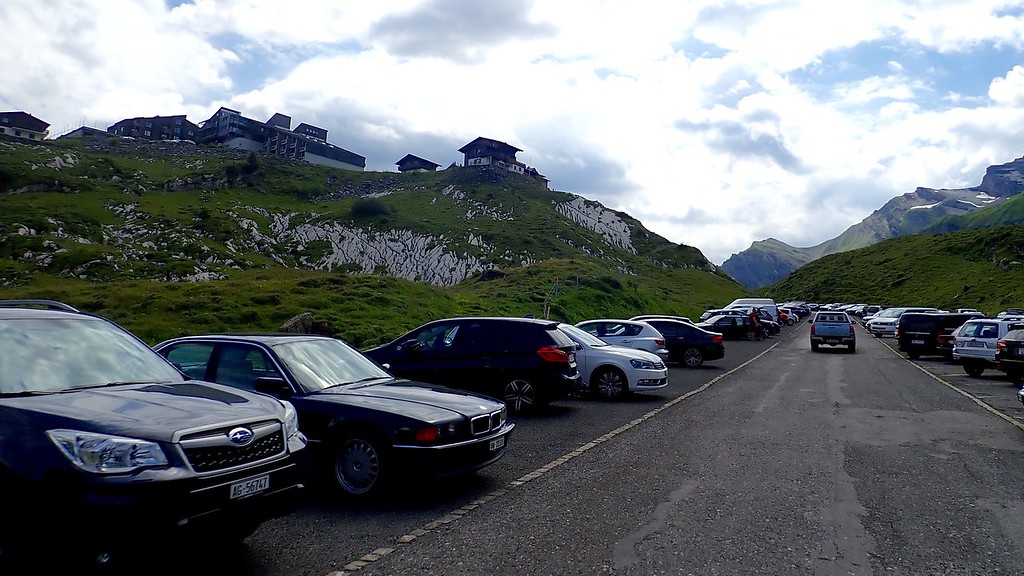 I was greeted warmly

I had a nice bite to eat while watching the clouds scuttle by and listening to the cow bells. Then I meandered around a little bit, but didn’t want to hike too far in my boots and gear.

The lake that the area is known for 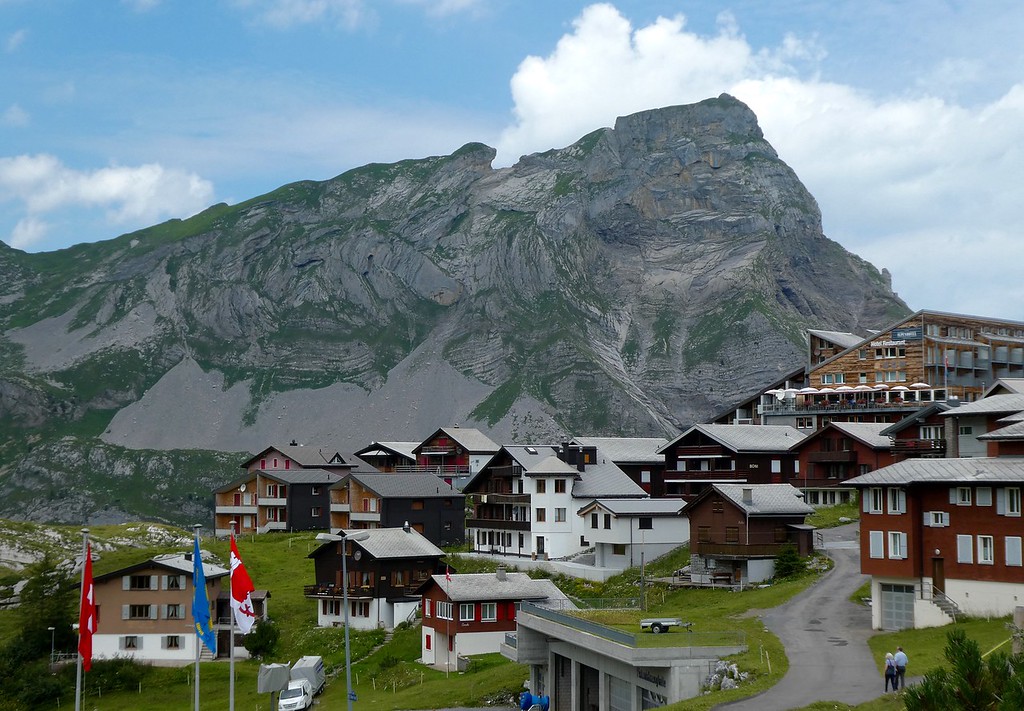 I got my gear back on, mounted the bike and rode down the parking lot. I had planned a nice back-roads only return most of the way to Basel and was looking forward to more exploration.

And that’s when my plans fell apart:

To the best of my translation, it read that when the light was read, the road was closed and no one was allowed to descend, even bicycles. The times were “example” times, and “periodic”, so I parked the bike and prepared to wait. It was quarter of two – I had time to wait. And I waited. I found a grassy spot, dropped some gear and laid back to watch the clouds and cows. 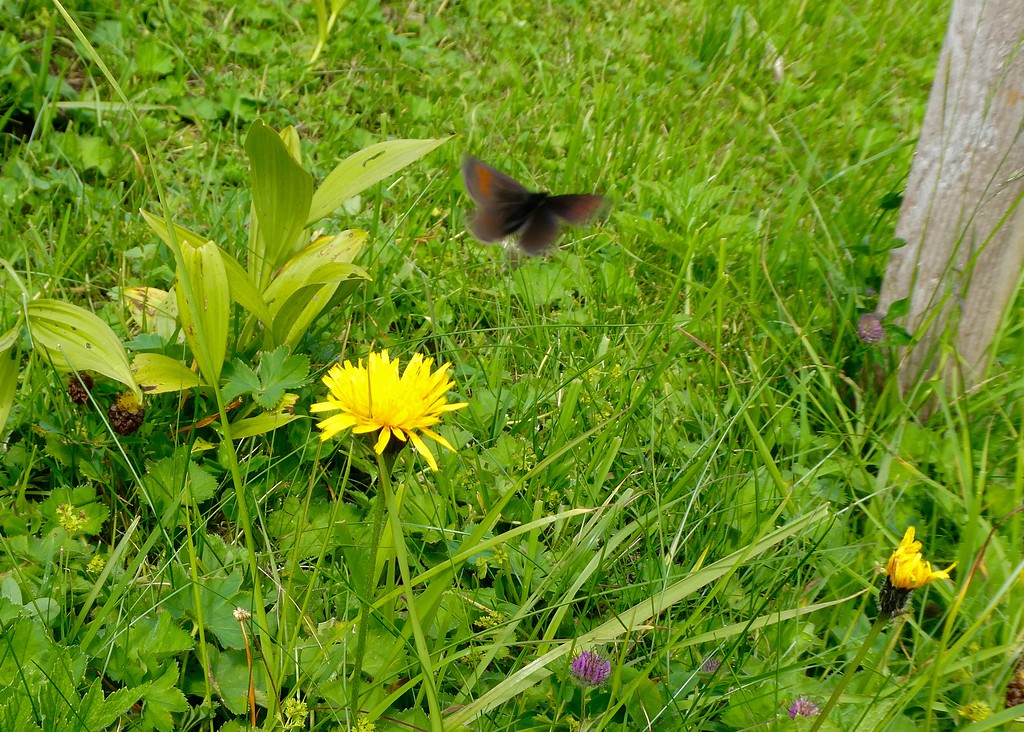 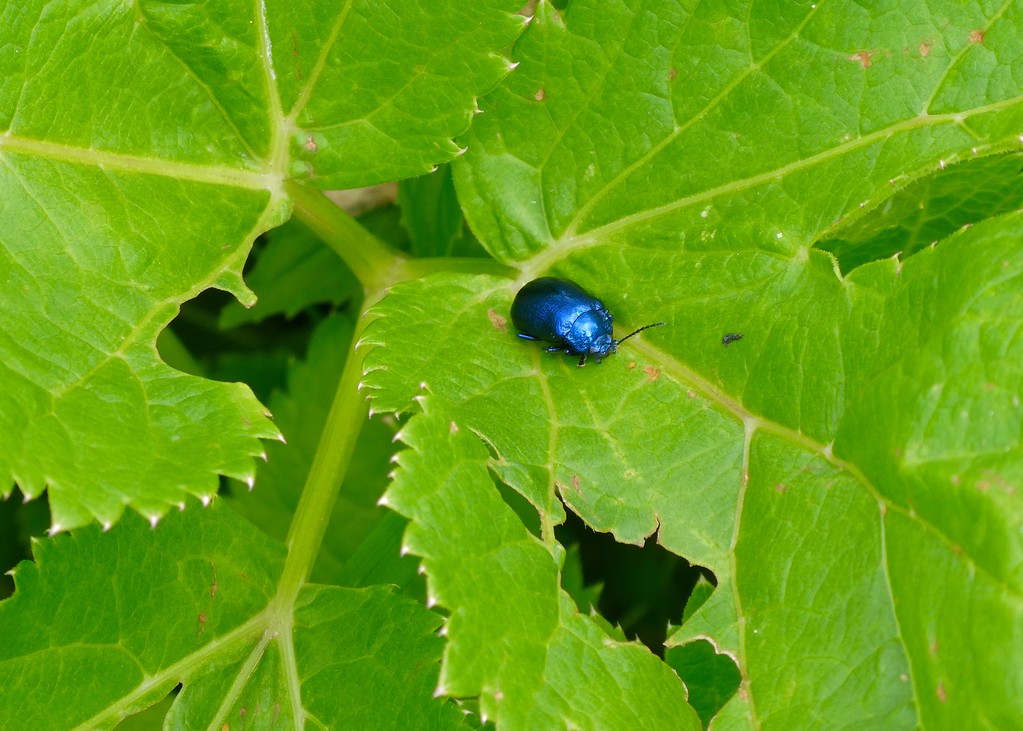 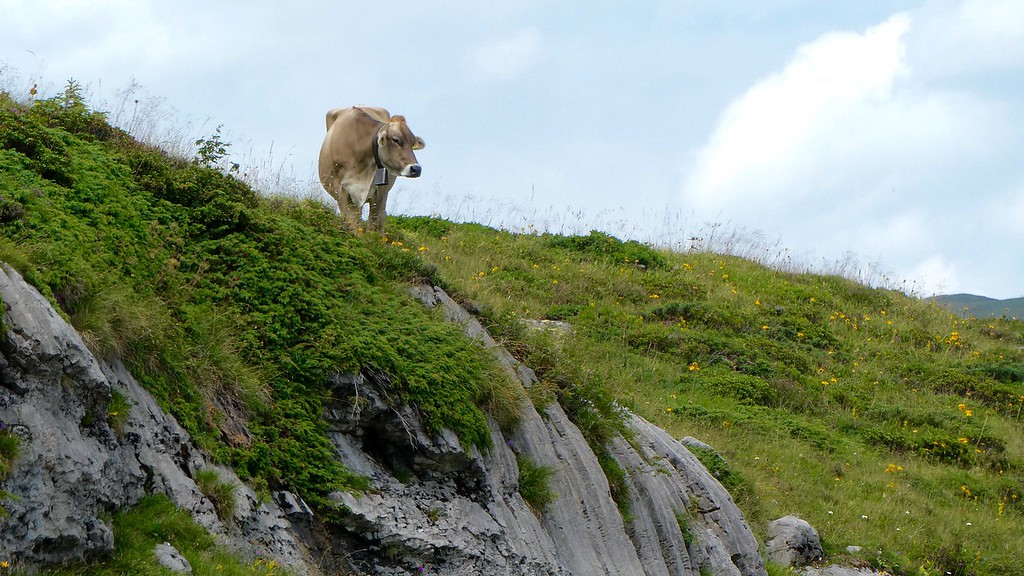 After 45 minutes I started to get antsy. A few cars had come up the road, but so far no one was interested in going down. I toyed with the idea of going down anyway, but my love of life and law kept me from doing so. I did, however, stop one of the arriving cars to ask them what they knew of the timing of the red light. It was enlightening: it would turn green at three o’clock. Another half hour to go! Because the road was so narrow, and corners so tight, it was a one-way road that changed directions at certain times.

About ten minutes before the appointed time, cars started to appear and lined up back from the light. Other people knew about this time – what had I missed, and where?  The first car in line was very polite and let me go ahead of her when the time came. At least I wouldn’t be behind a camper! 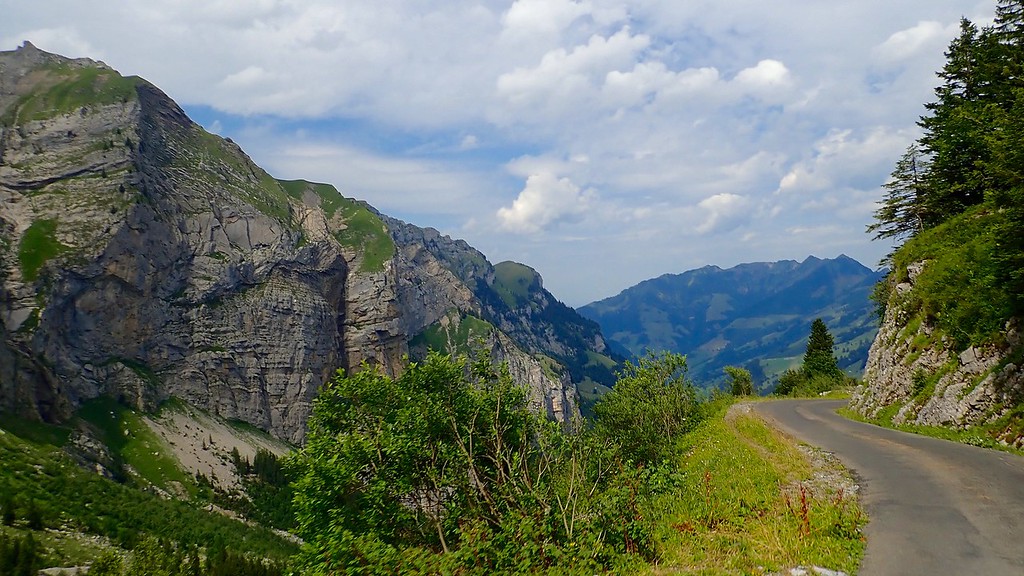 The road was a ski run in the winter, and metal supports would be used to fence off the edges 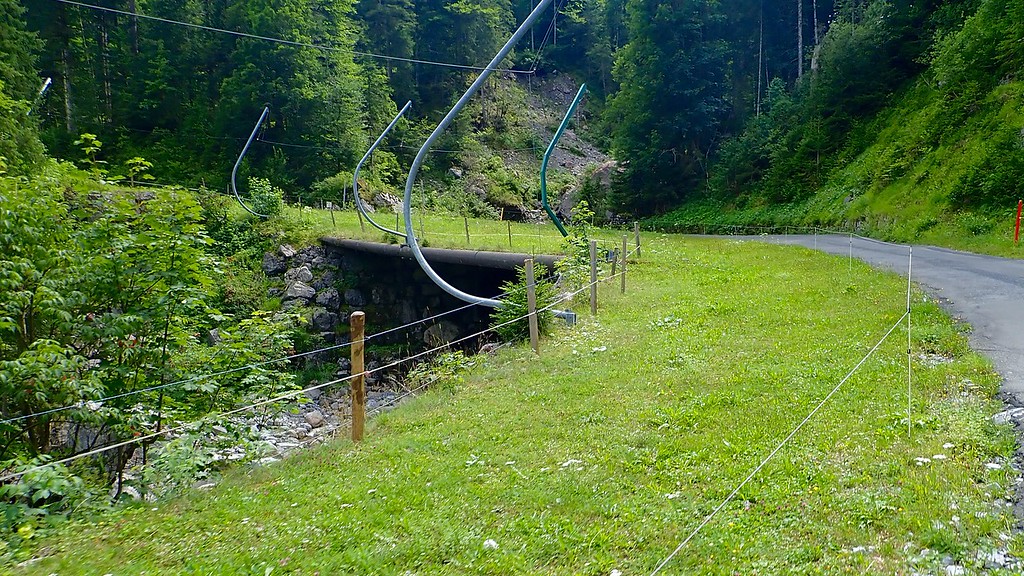 Because of the unexpected delay at the top, I re-routed for a direct line home. Unfortunately, this put me directly into post-work traffic

And it was getting hotter, too. The temperature hovered between 32-33, but peaked at a high of 35 as I hit the Basel traffic jam

And that, my friends, is how I spent my Monday.