A hike into the Surreal

With our upcoming Big Hiking Trip looming in the not-too-distant future, we’ve been trying to get out more often for some practice hikes. Dan chose “Kandersteg”, mentioning that it was a popular hike and supposed to be quite beautiful. I was just happy to get out of the city and into the mountains on yet another hot summer day and said “Sure! Sounds great!”

It was a two hour train ride to get to the village of Kandersteg, set in the Alps near such famous landmarks as Grindelwald, Lauterbrunnen and the mountain peaks Eiger, Monch and Jungfrau. The train was packed, full of others who wanted to enjoy this great late-summer day. We got off the train with most everyone else, but where to go? The crowds has quickly dispersed, and the trailhead was not as well-marked as we expected. We followed the signs for the Gondola, and a couple of larger groups of people. We did not have hike up to our destination (Oeschinensee) but that would rather defeat the purpose of our trip!

Heading for the gondola – and hopefully our trailhead 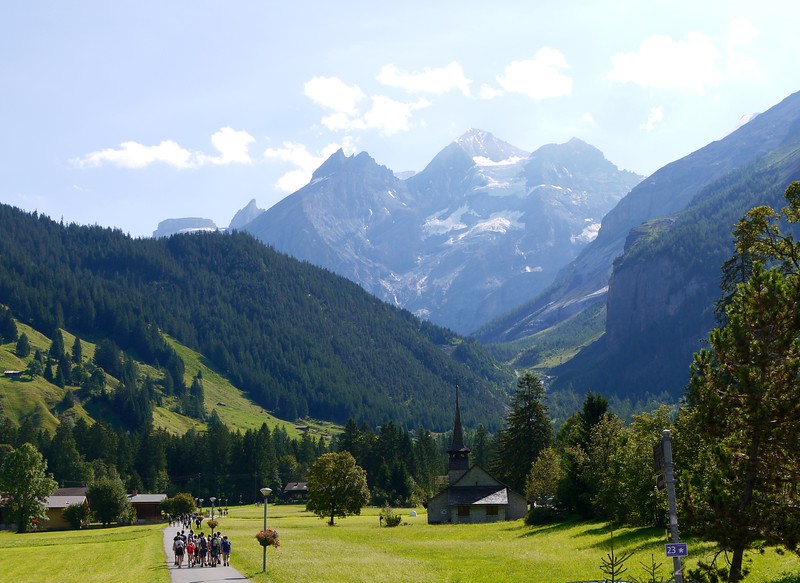 Looking back at Kandersteg

See that peak? Its name is “First”. That’s right: it’s mine!

The trailhead turned out to be easy to find, once we left the town behind. It was also easy to find simply because of the large number of people going our way. And the trail wasn’t even a trail: it was a lane-wide gravel (sometimes paved) road, winding through the pine forest, but also across sunny meadows. And those sunny meadows were hot!

Waterfall viewed from the trail

We shared the trail with many others, some with four legs

I mentioned a couple of times the number of people on the trail. There were entire packs of teenagers, obviously out for a group camping trip, families with bathing suits and towels, dogs with sticks and an old man with trekking poles. Dan and I were just two little fishes in the stream of life. The online trail descriptions all state how beautiful and popular this area is but I completely underestimated the popularity.

Oh look: here comes someone else!

The road was steep and the sun was hot, but the views were always rewarding. It was only an hour or so before I could tell by the geography that we were near the lake. A glacial lake, surrounded by alpine peaks – I couldn’t wait to sit down and enjoy it.

And then the trail crested a small ridge and there was the lake: a glistening bowl of glacial melt-water surrounded by steep cliffs, forested slopes and cows. 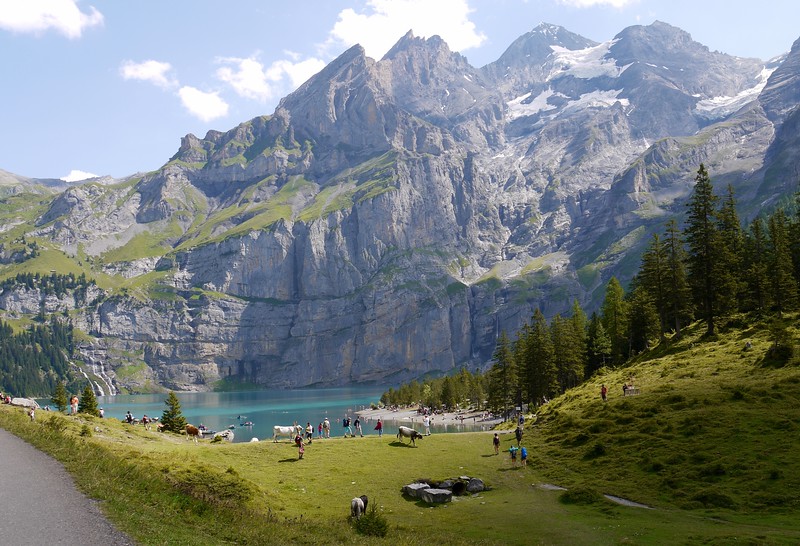 Let’s get a closer look:

Some people ignored the cows completely, watched them carefully as the walked by, or stood behind their cameras – like I did. Such a great scene was before my eyes: Row boats could be rented and they left their wakes in the otherwise still water. Many people had lit small fires or grills and were sitting around eating and drinking. The lake water was surprisingly warm – although I’m not sure if I would have gone in completely – but I was jealous of those taking advantage of the cool water. Instead, Dan and I bought ice cream cones to enjoy while we watched the show before us.

Looking across the lake

One of the mountain restaurants by the lake 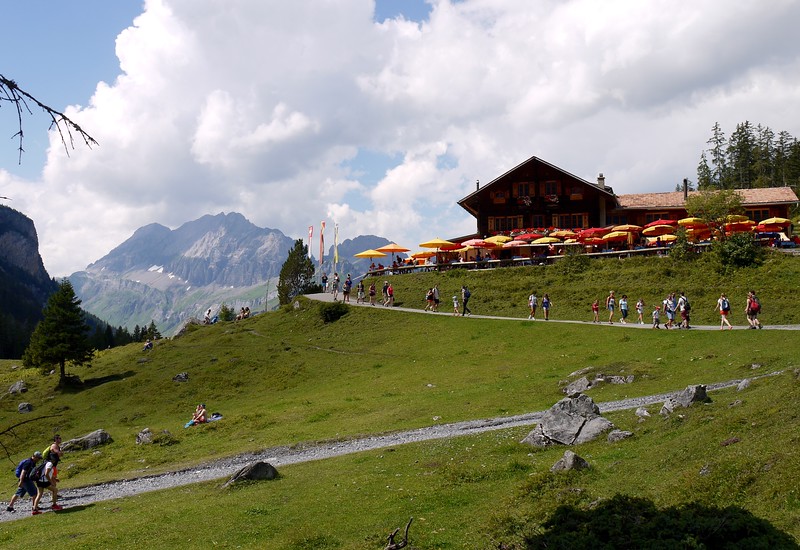 After a short rest by the shore we decided to continue along the trail along the lake. A Wanderweg sign indicated that an hour further along the trail was “Unterbergli”, a small restaurant. We made it our goal and continued along the lake. We found that the high number of “tourists” meant that the usual level of Wanderweg friendliness was gone. During a typical hike, every person that you pass greets you (and you greet them) as a matter of curtesy. But not today: too many people were not from Switzerland and were unaware of this custom, so many blank, staring faces passed by, unresponsive to our “Gruetzi”. It was surprisingly disappointing.

The path had narrowed, but the crowds were still present 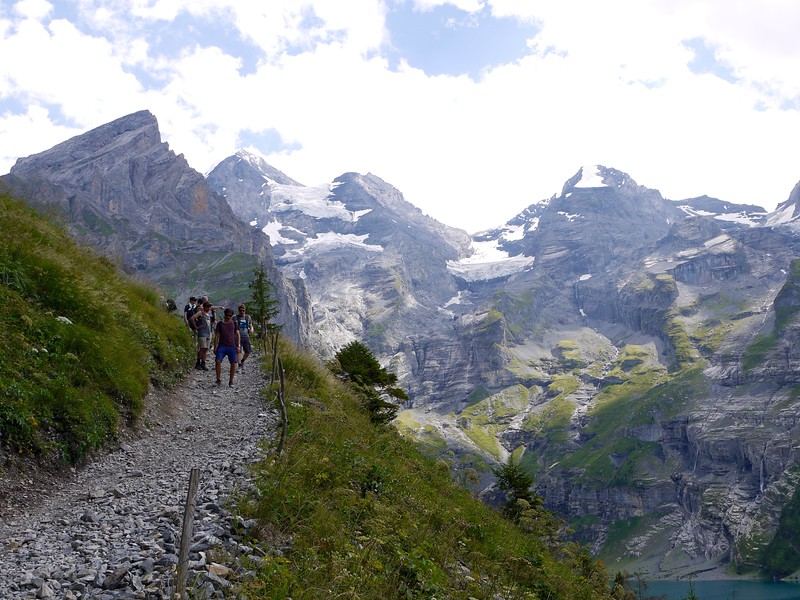 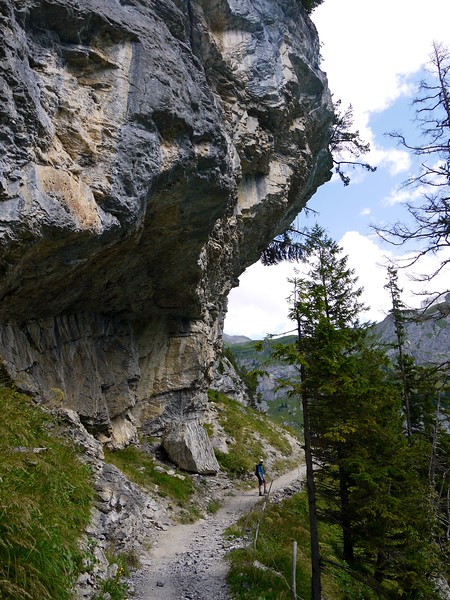 Looking back at the horizontal tree cliff

I was more than surprised to find a 4-wheeler heading down the path towards us. The trail was rather narrow at this point so I hurried to a wide-ish spot next to the rock face (joining another hiker already waiting there) and let him pass. Assuming that he was a farmer moving materials up or down the mountain, I watched with curiosity as he and his passenger trundled past. Dan pointed out later that the “passenger” was actually an injured hiker who had his knee bandaged. I was hoping not to get my own ride down the mountain.

Negotiating a narrow section of the trail

We made the final ascent to the restaurant and I assumed that it being well after lunch time (one o’clock is “well after lunch time, right?) there would be no problems finding a seat. I was wrong. Every table was taken, and only one table wasn’t full. Two seats were free, so I made my way to the table and asked if we could join them. They did not hesitate to make us feel welcome. As they hadn’t even ordered yet, we ate our meals together and had a nice conversation. They were Americans living in the Lausanne area and were enjoying a day in the mountains, just as we were.

Goat! (by the roof edge)

Nice details on the woodwork

The cows were not shy 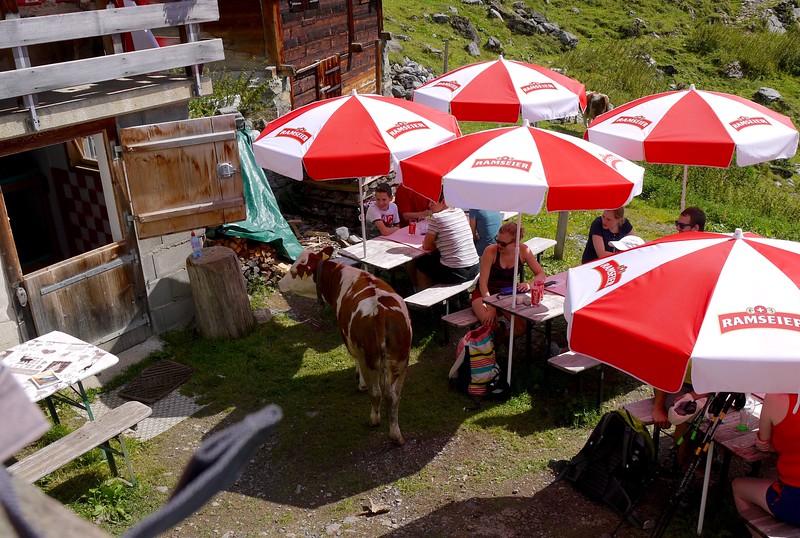 Post-lunch photo, taken by one of our lunch companions

We finished up our meals, finally got the server’s attention long enough to pay our bill (the poor woman had very little help and there were a lot people to serve!) and we said our good-byes to our new friends as they headed back down the trail to Kandersteg.

It was time for us to head home as well and we followed them at a discreet distance, with me adding to that distance every time I stopped for another photo – which was pretty often. For as many photos as I took on the hike up, the view on the way down demanded that I take more.

Deep cuts in the cliffs 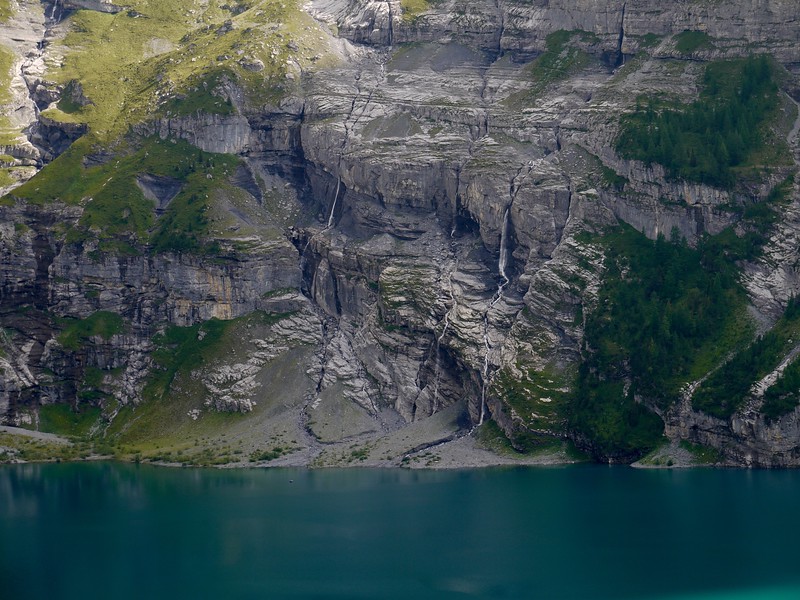 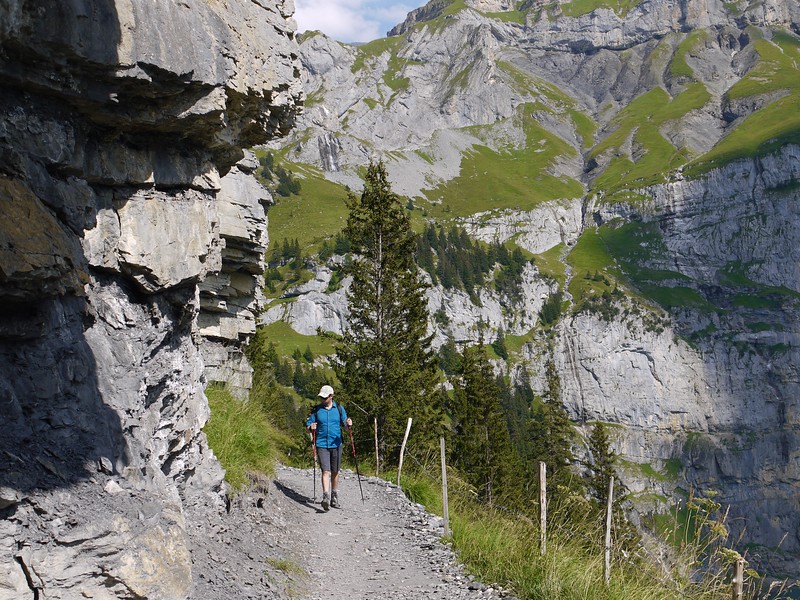 The beaches were practically empty by the time we reached the lake again but there were still plenty of people enjoying the beautiful afternoon. The hike back down to Kandersteg was a lot less crowded – and a lot faster now that I wasn’t (ahem) “stopping for photos” every fifteen minutes. The afternoon clouds had rolled in and covered up the mountain peaks behind us. It had been a great day in the mountains. 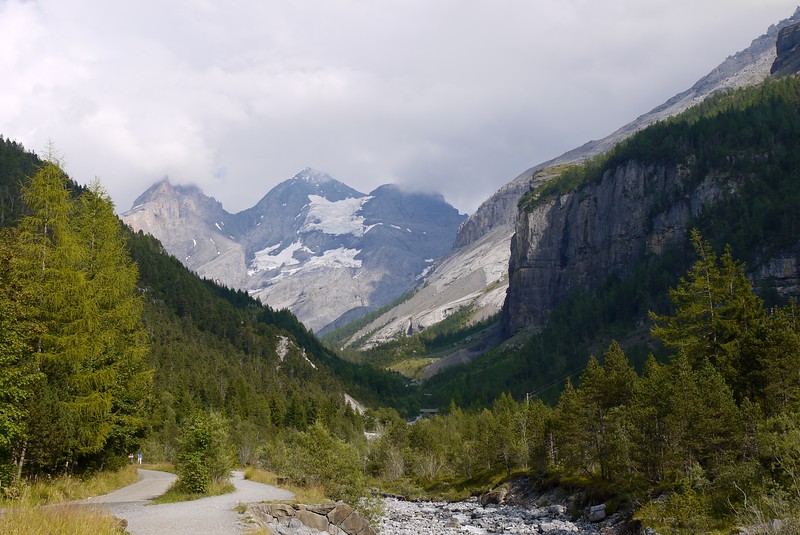