Hiking with Dan: Olten to Eptingen

Dan and I agreed to go hiking today, but where? We bandied about a few ideas and settled on Olten to Oberdorf, following a valley through the rolling hills of the Jura region. Dan did some research and said that it would be about three hours and that our running shoes should be sufficient. We packed up our stuff and rode our bicycles to the train station. The weather was fantastic! The temperature had dropped down to about 21C from a high of 33C just a day before. Thank goodness, because otherwise I would have refused this hike.

The train dropped us off in Olten and we easily found the wanderweg. The heavy rains of last night were evident in the debris on the trail and the catchment ponds full to the brim with muddy water. The trail was a little muddy, but nothing too much for our running shoes. I wasn’t going to take any pictures on this hike. Instead, I’d just follow the valley and enjoy the day. But instead of sticking to the valley, the wanderweg instead immediately went uphill.

I grumbled because that’s what I do when I go hiking and then took my first picture. I liked how the ivy trailed down, the fungus faced up and the sign…well, I just like the wanderweg symbol. 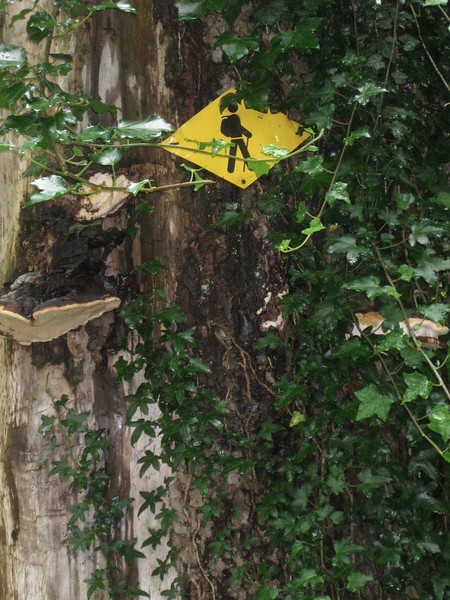 I didn’t take any more pictures as the trail continued its gradually climb. It was a wide trail – more like a forest service road – and in good condition. We had been in the forest for a while and then we broke out into the partial sunshine and I had to fire up the camera again.

I love this country

The road continued up behind Restaurant Rumple (I love that name) and disappeared back into the forest. And went up some more… 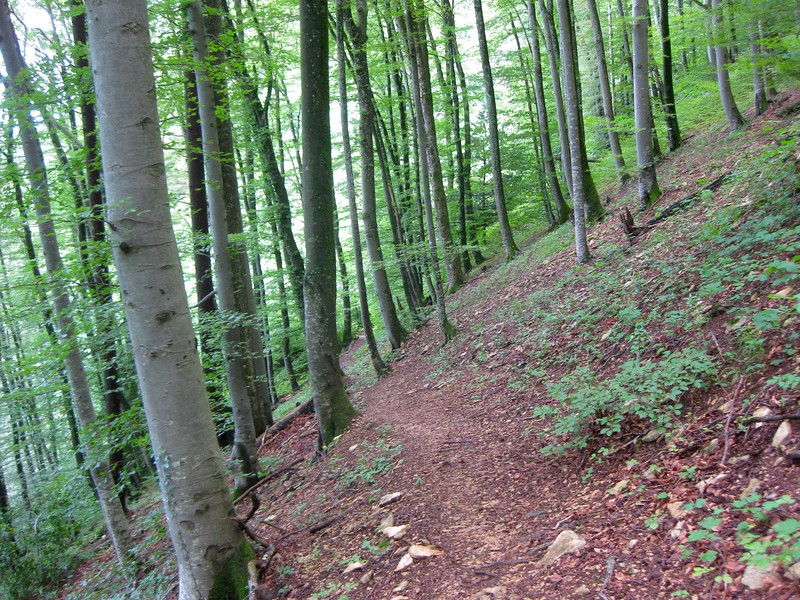 Looking back down the trail 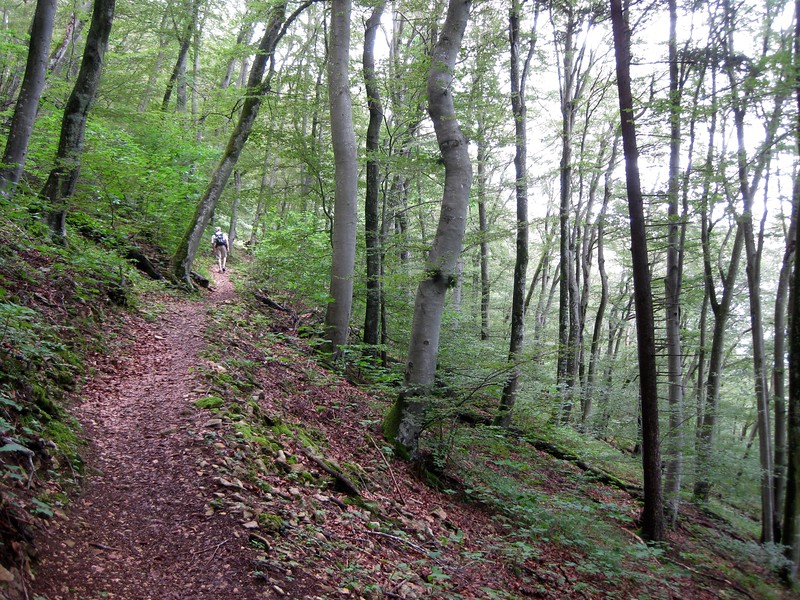 My usual view of Dan on hikes like this

We had reached the highpoint of the hike, Hornberglücke, at 905 meters. As Dan put it, it was all downhill from here. 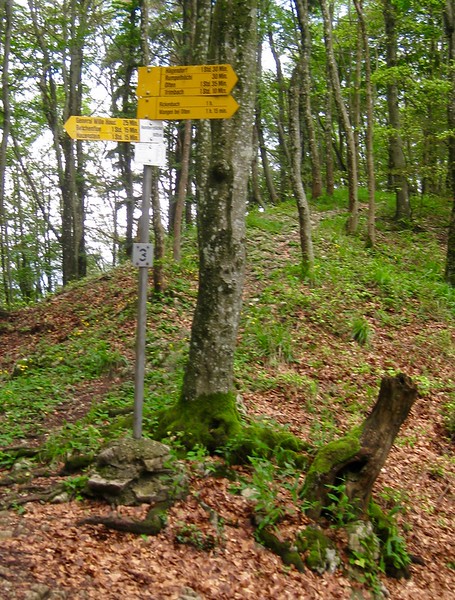 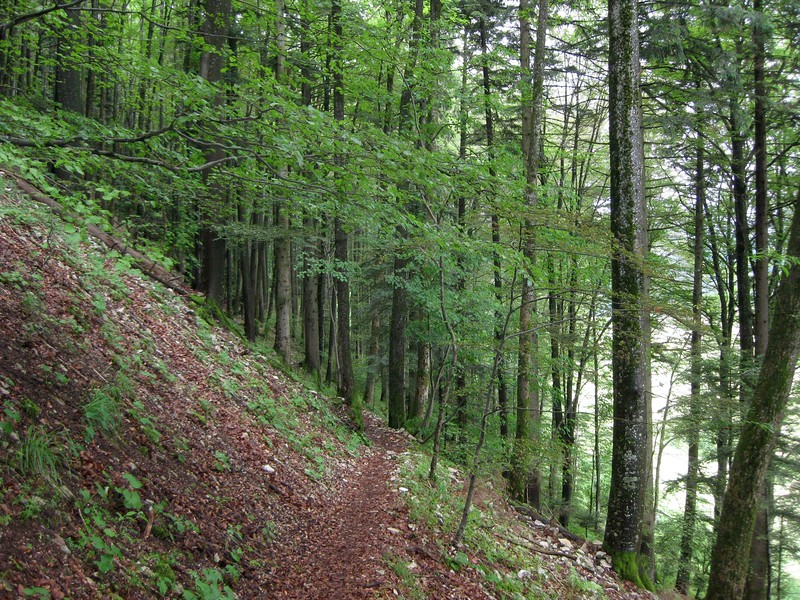 Going down the other side of the ridge

When we came back out of the forest, we came out to a different day: the sky to the northwest was dark and the winds were much, much cooler. It felt great.

The path also go narrower and muddier. I was wishing for my hiking boots as my light, mesh runners brushed up against the wet grass and squelched in the thick mud. The ground underneath was uneven and I was worried about rolling an ankle. Still…it was beautiful here and I soaked up the scenery, the clouds, the thunder and the rain. 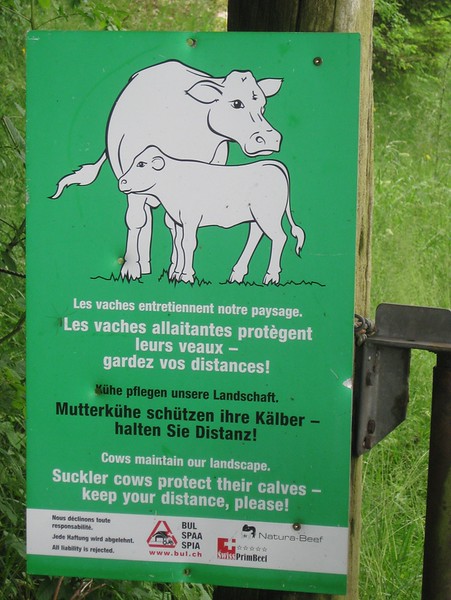 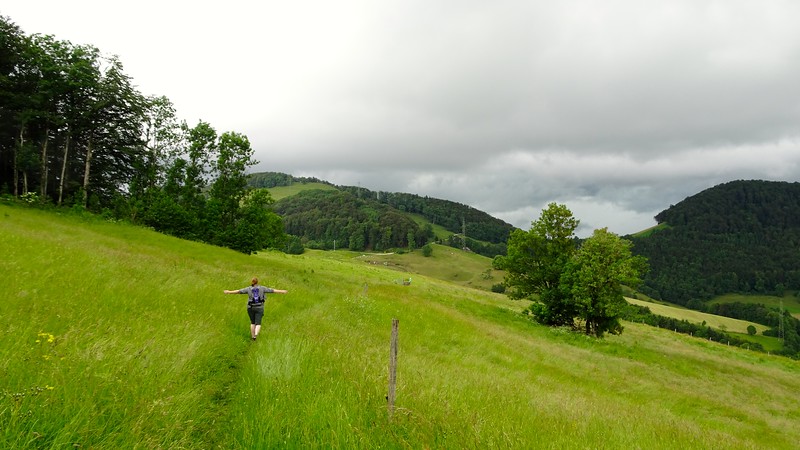 Dan’s picture of me

The rain front swept through and dropped some fat, cold rain on us, but that was short-lived and the temperature stayed low and the cool breeze kept me happy.

Dan tried to make a friend

We were once again in the trees, on a long, sloping uphill road. We had passed General Wille Haus, obviously a base for summer military maneuvers, and were now on the road known as being a part of Fortifikation Hauenstein. This was a 48 km defensive front in the Jura constructed in November 1914 in reaction to Germany’s aggressions. There were so many interesting plaques lining the road. Some of them were barely legible and others had obviously been well cared for. 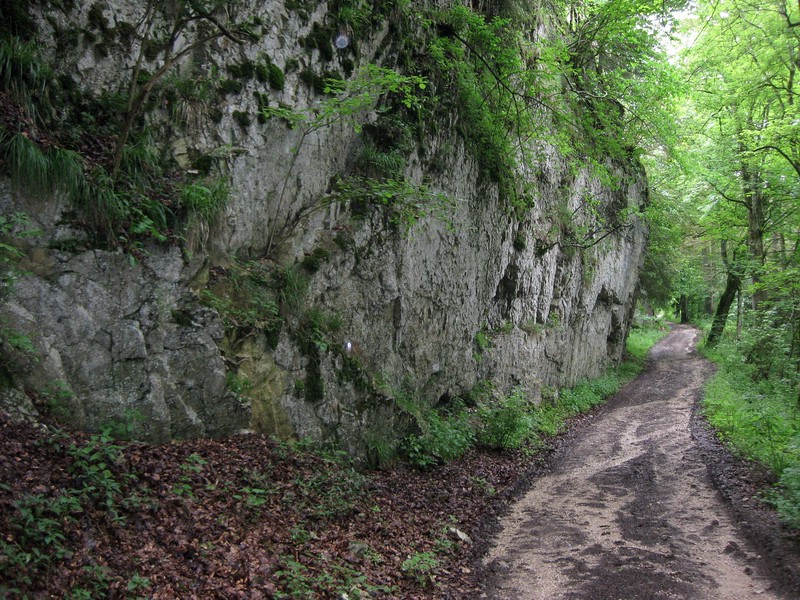 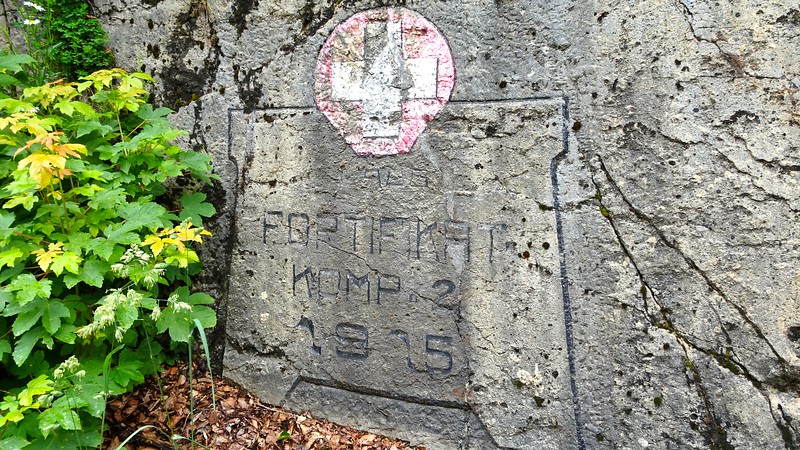 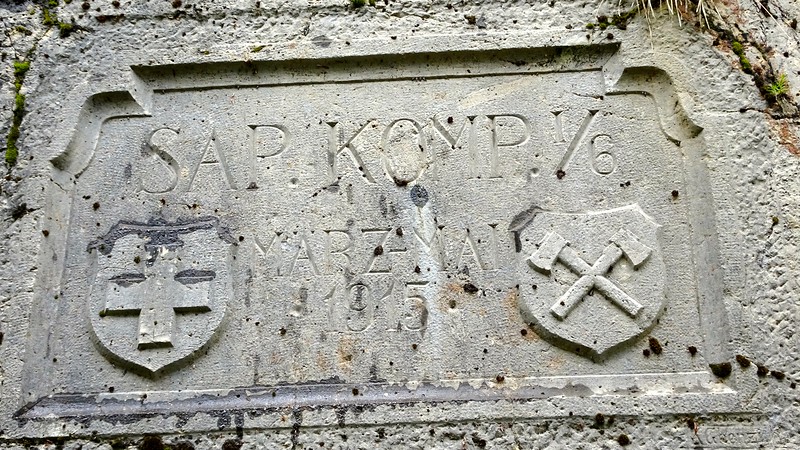 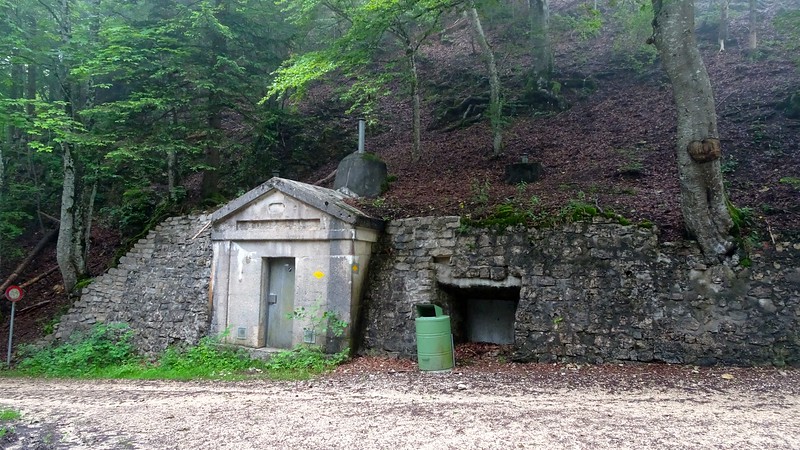 Doorway to the underground world of Switzerland

By now I was looking forward to the bus/train ride home. I need to get some insoles for my shoes, apparently. Still, the landscape was wonderful and, for the most part, distracting. 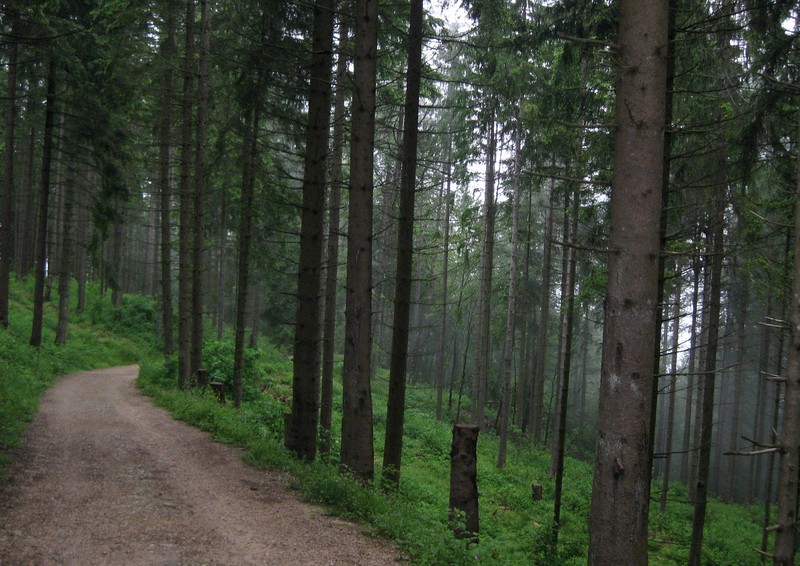 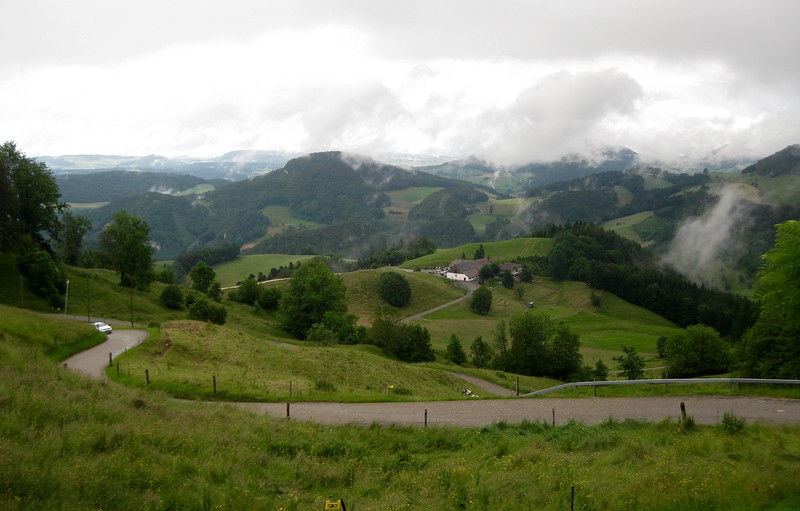 And then the wanderweg disappeared. I mean, the signs were still there, but the trail vanished into a thick undergrowth of lush green forest. This was not the usual well-maintained Swiss trail system I was used to.

The mud was slick, the slope steady, my running shoes had no traction…I fell. Only once, but really, once you fall once, you’re covered in mud anyway. Dan of course was nowhere to be seen by this point, so I continued down the Slip ‘n Slide until I found him. 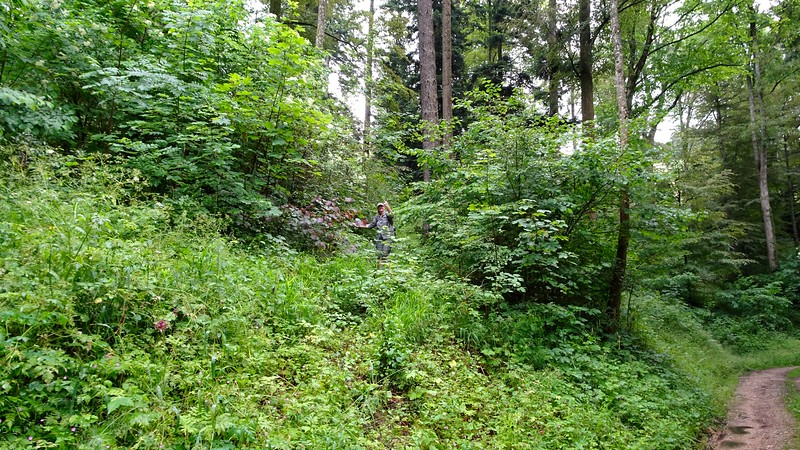 Dan takes a shot of me emerging from the jungle 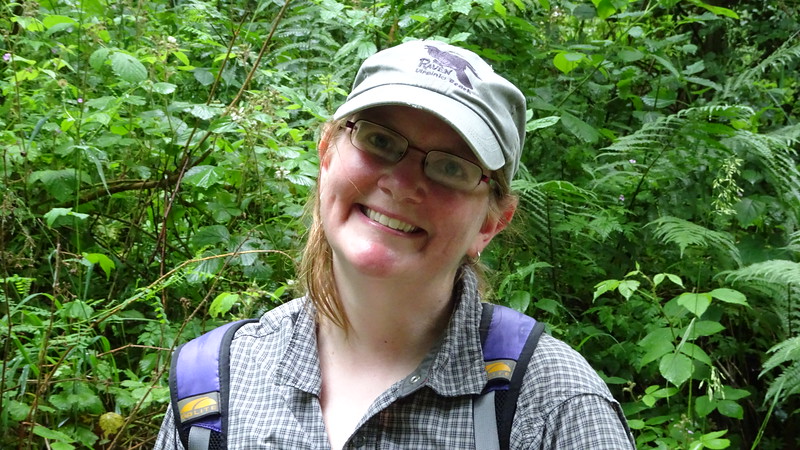 Still smiling (but cursing under my breath 🙂 )

We gave up on the wanderweg from here. We were close to Eptingen, the closest village with transit. We stuck to the road and enjoyed the views and more cows. I would have taken more pictures but really, the scenery is all the same: heavenly. 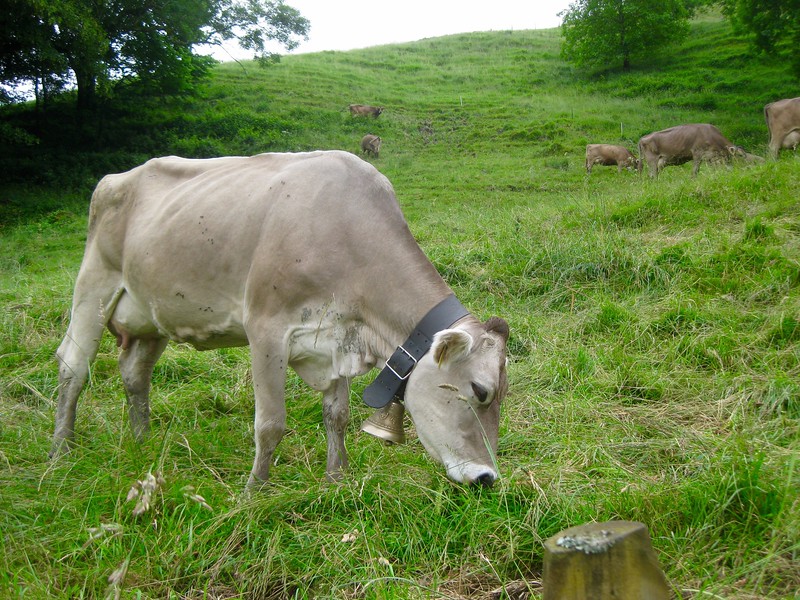 We came out to the A2 motorway, directly at the entrance to the Belchentunnel (I can’t believe that a tunnel has its own website!). Last year they started construction on a second tunnel and it was interesting to see it up close and not at 80 kph. Looks like it’ll be done in 2022, to the tune of 500 million Francs. Ha! Try getting that through a State transportation budget! 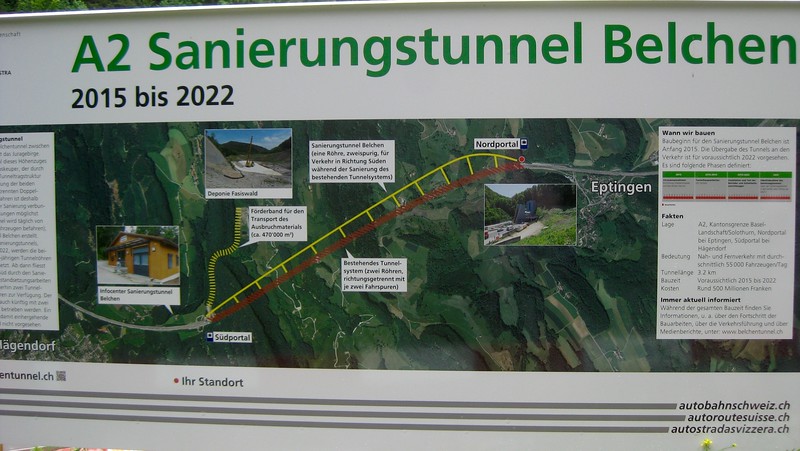 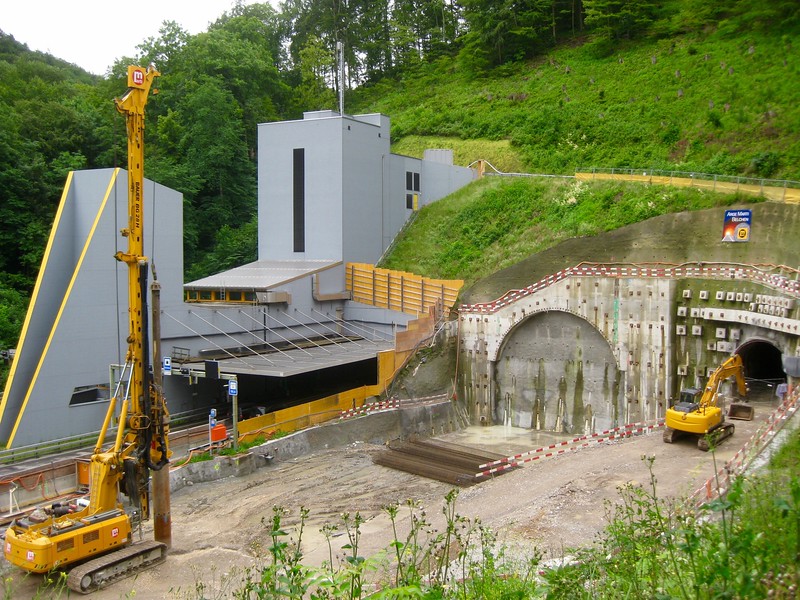 It was a quick walk into Eptingen from here. Dan had checked the bus schedule while were still up in the hills and the bus was scheduled to come every hour at the :33. We knew that we would arrive too late to catch the next one, but we walked to the bus stop just to check the schedule and be sure. Surprise: The bus pulled up one minute later! The driver hurriedly waved us onto the bus, saying something in incomprehensible Swiss German about not paying and just taking our seats. Turns out that we would have missed our bus except that it was seventeen minutes late! What has happened to the timely Swiss transit? Still, it was greatly to our benefit and we were soon in the town of Sissach where there was an easy 12 minute wait for our train home.

According to Dan’s watch, we covered 16.52 kilometers over 5 hours and 20 minutes – so much for a casual walk along the valley for a couple of hours. I know that I complain while hiking (and therefore while writing about it), but honestly, by the time I have had a shower and a good night’s sleep, I am glad that I did it. And I am, as I sit here, comfortably on my couch.

Our hike, mapped via Garmin