Hike #3 in our ever-continuing to quest to get into proper hiking condition. Or at least get me into proper hiking condition. Dan is already running circles about me. Fortunately Dan knows what kind of trails that I prefer and he did a great job this time of picking out something good. It was a full exercise of the Swiss public transit system: train from Basel -> Zurich -> Wädenswil -> Einsiedeln and then a bus to Hoch Ybrig and finally a cable car to Seebli. got it?

Our bus was full and most of the riders got off at last stop with us at the cable car base. As we filed into cable car I looked around and noticed something interesting: I was the only woman in the car. The rest were all older and jovial hikers, ready for a day’s trek in the mountains. When the cable car operator got on board the men all swarmed around her. Sure, they might have simply been interested in the workings of the machinery, but it looked like something else to Dan and I. 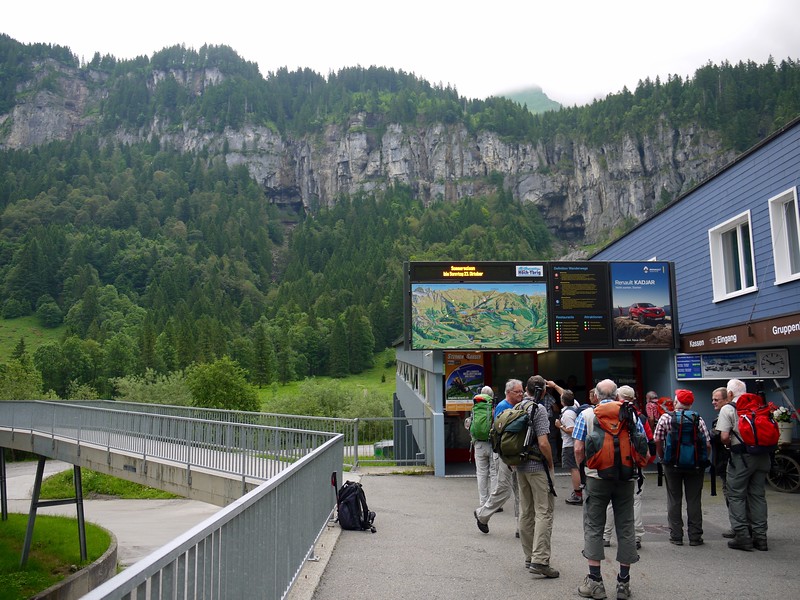 Hanging out with “the guys” while waiting for the cable car

There wasn’t much of a view on the way up and the time passed quickly and uneventfully. Everyone got out of the cable car and went off on their own way. Dan and I stepped outside and I stepped immediately back – it was raining.

Dan was in charge of this trip. I take care of our motorcycle trips and he takes care of our hikes. It was his job to find the trail, our transit, our gear and check the weather. He said that it wasn’t supposed to rain until later afternoon (4 pm, actually). It was only 10:30 and a steady rain was falling. We didn’t have any rain gear with us and the idea of hiking for the next five hours in wet clothing was not appealing. Somehow, Dan convinced me to continue. We started down the trail and five minutes later the rain stopped – just in time without getting our clothes soaked. 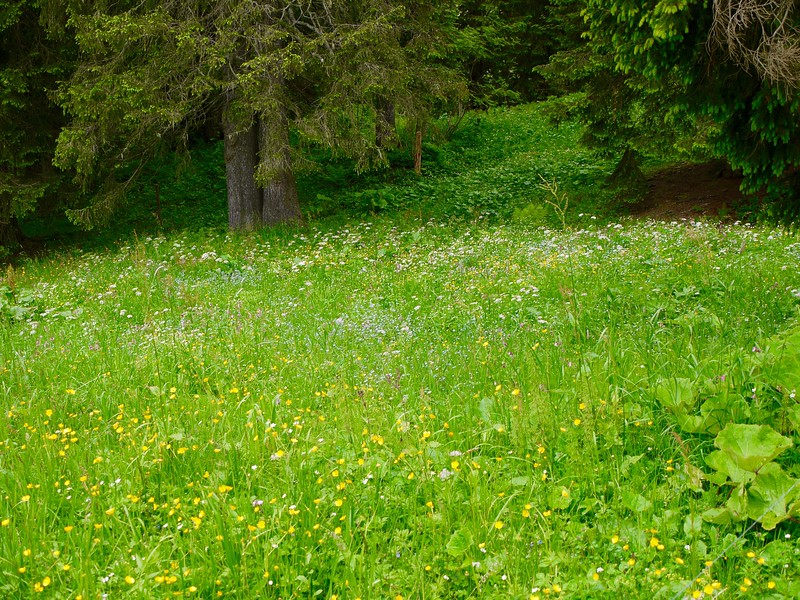 The trail was more like a path: paved, just wide enough for a vehicle and gently climbing up the hillsides. The temperature was perfect for hiking and a fresh wind blew across my face, cooling me down as I walked. The clouds covered the sky above fairly thickly, but I did spy a bit of blue once in a while. 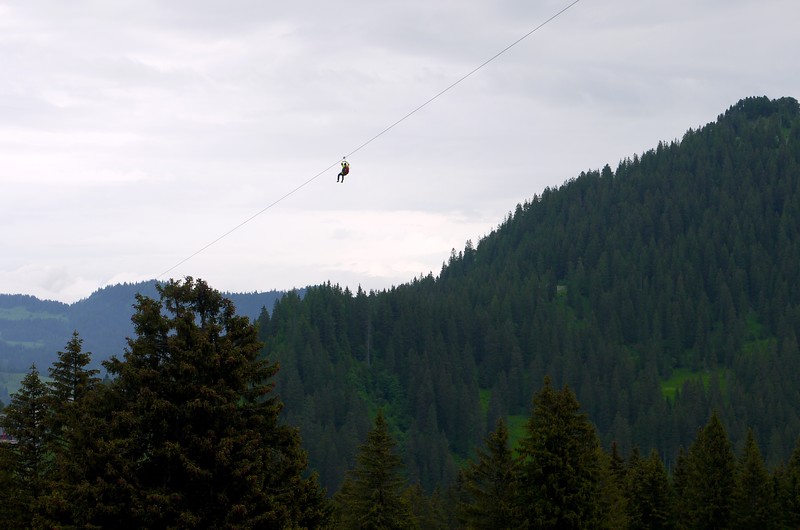 Someone on a zip line overhead 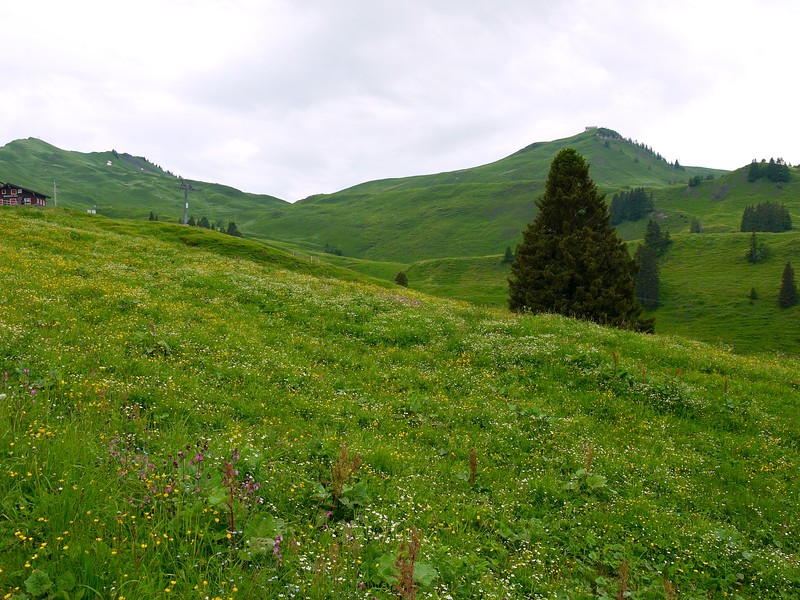 Did I mention the flowers?

We were working our way up to a ridge line. We could have taken a second lift up to it and then walked across but Dan planned this route, so this is the route we were taking. We passed a barn and a couple of alpine restaurants and many, many ski lift pylons. This place has a healthy ski industry, but not this time of year.

Farmer cleaning out his barn 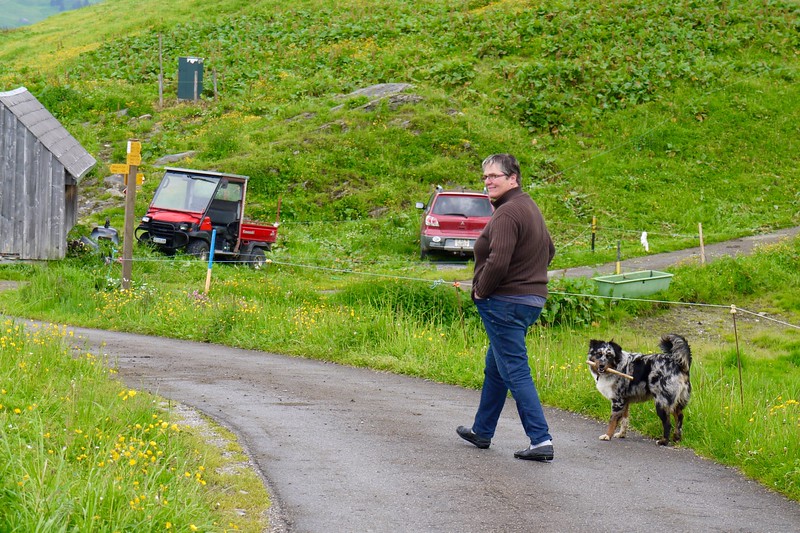 Woman and dog – and many wanderweg signs in the background 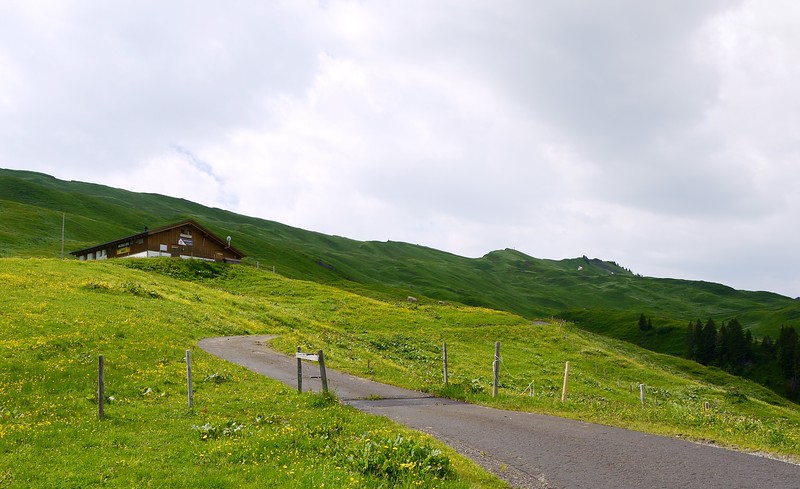 A spot of sunshine!

The cows that we’ve seen are obviously well cared for. They are generally friendly and will easily come up to you to see what you might have for them. They like to lick hands and watch us with curious eyes. The yearlings are a little more skittish, but still seem to know no fear of people. It is nice to know that their life seems stress free. 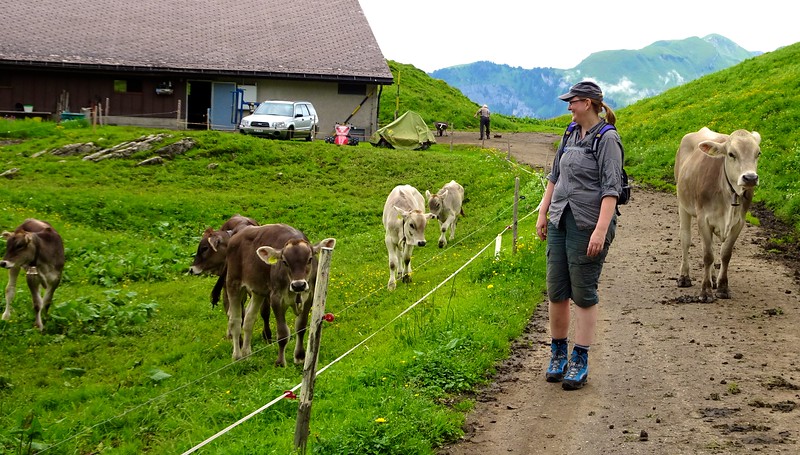 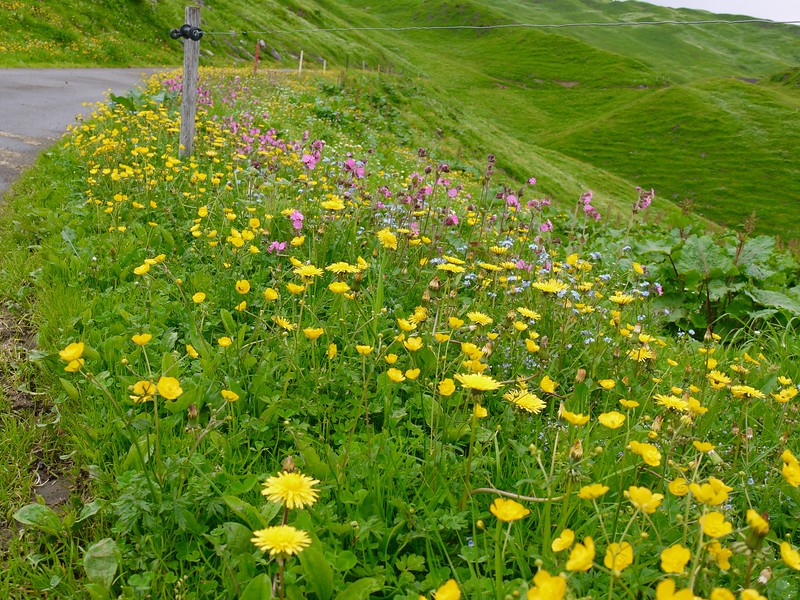 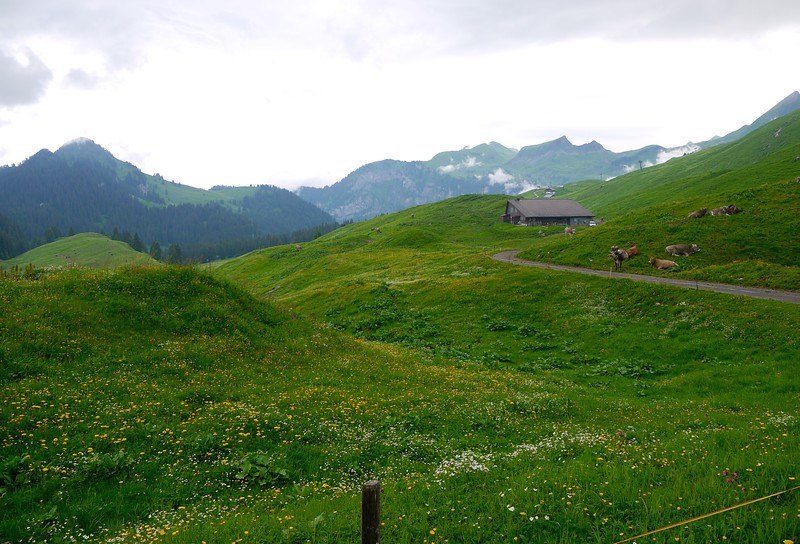 And this would be the end of our scenic journey. As soon as we crested the ridge in front of us, we found ourselves deep in the clouds. The views closed in until we couldn’t see beyond the next hill, and sometimes not even that far. 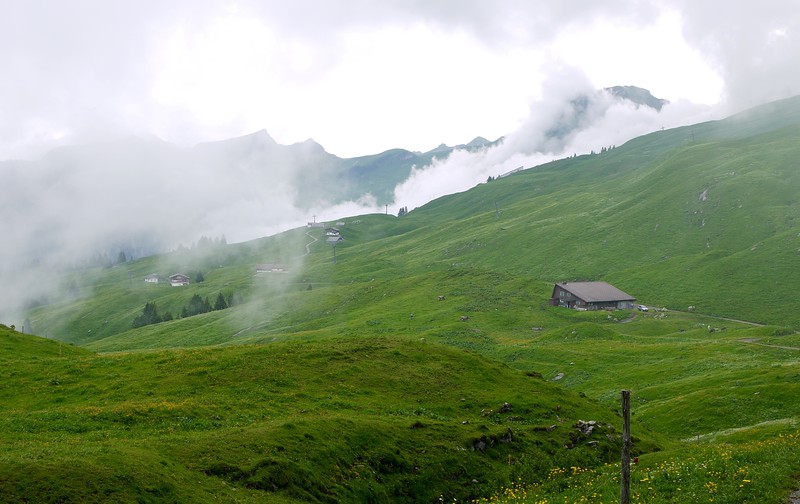 Looking back again; the clouds are getting thicker 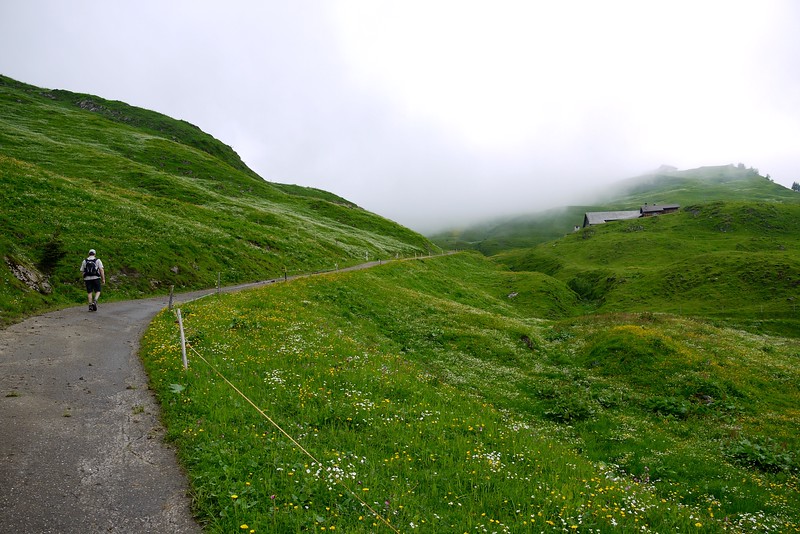 Hiking into the clouds

We climbed still further, making our way up some timbered stairs to the top of Spirstock (1771m). I took a break to catch my breath and Dan took this opportunity to catch our view on video. It was at this point I put the camera back in my bag.

Video Link of our view

The clouds backed off a bit, but we knew that we were missing out on a Spectacular View. I had no idea just how Spectacular it was until I got home and looked it up on the Internet. Here is one shot that I found that that shows what I missed out on seeing personally:

When I saw that a small chapel (Laucherencheppelen) was on our route I told Dan that it would be a good place to take a break. I had brought snacks and I wanted to make sure that I was drinking enough water. It was a steep downhill slope and we both regretted that – once again – we forgot our trekking poles. Some day we’ll be 100% prepared! 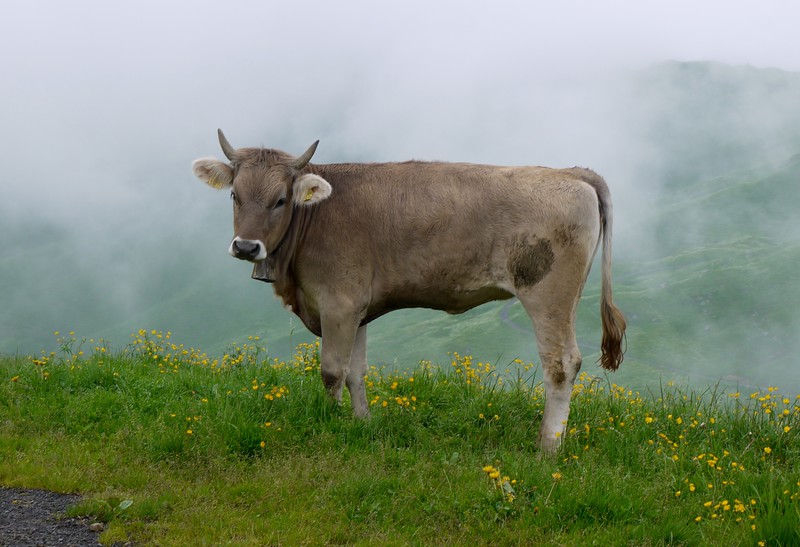 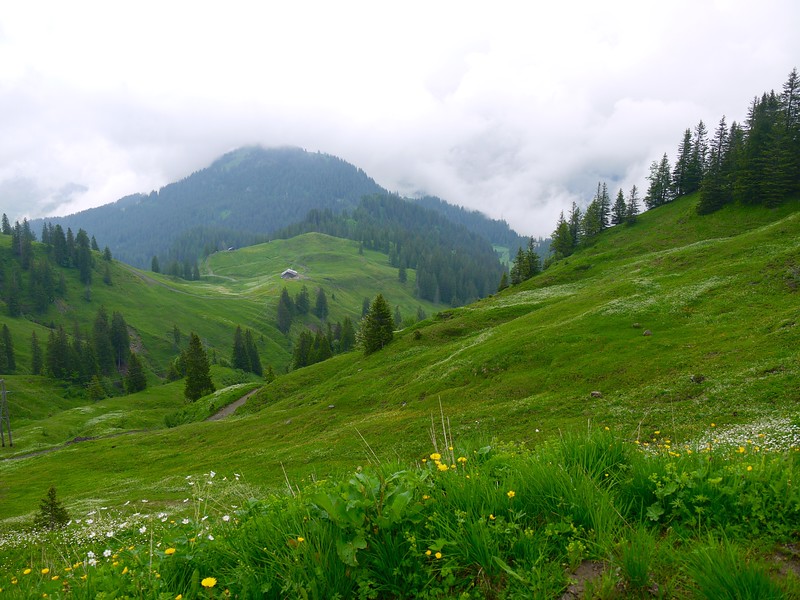 View to the right as we descend 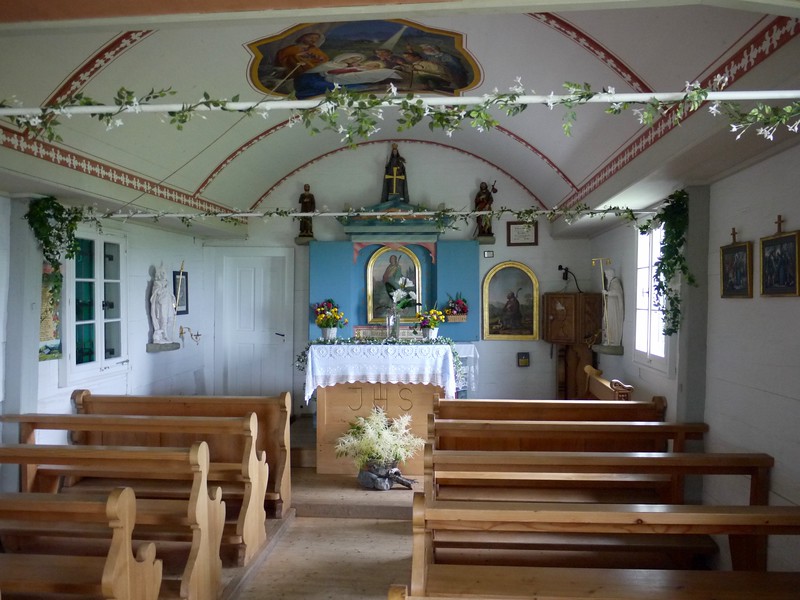 The Chapel door was unlocked and it was much nicer inside than I expected. I took a seat outside and broke out the dried fruits and nuts and enjoyed the refreshing breeze. We could hear the voices before we saw the hikers: a small group was making their way down the slope we had just come from. As they reached the gate of the chapel it started to rain again and we all huddled under the generous overhang of the chapel. They were a friendly group and made jokes about us having just gotten married in the chapel and where was the band?

After a bit more banter Dan and I bid adieu to the group and continued on our way. It was still raining and the clouds were low and thick and reduced our visibility down considerably.

I put the camera away again after this taking this picture 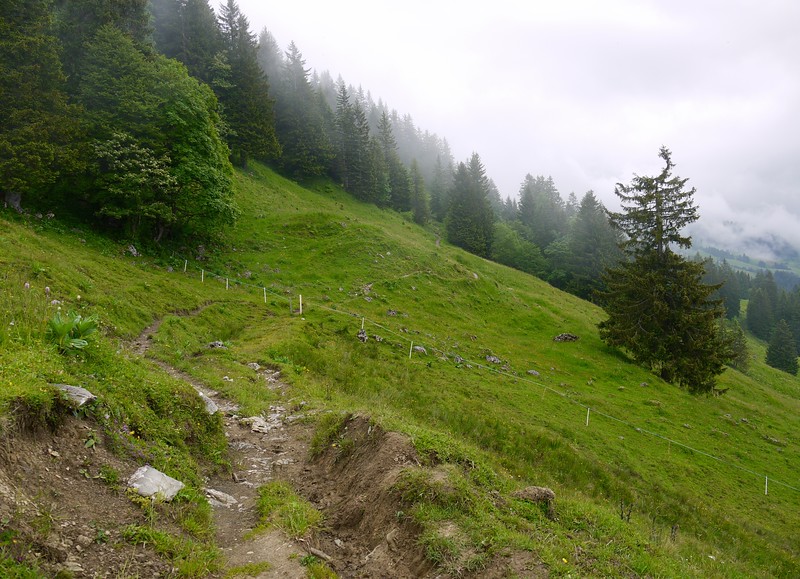 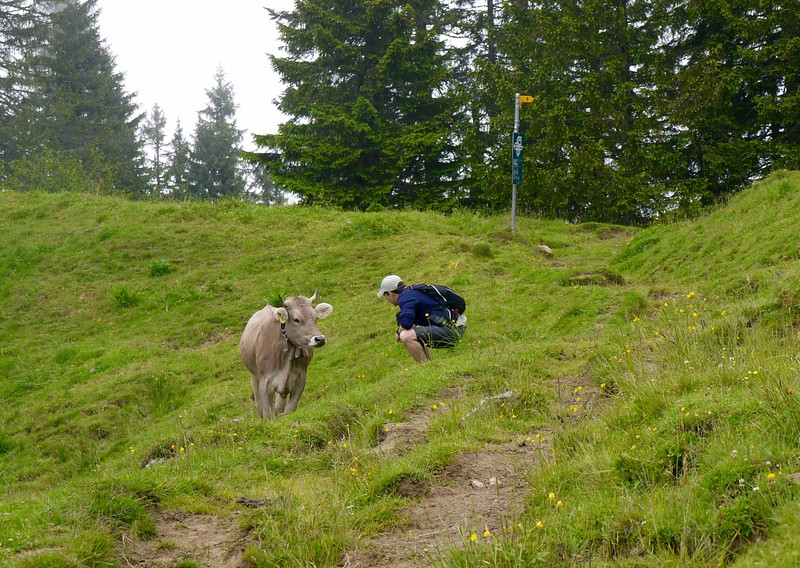 Dan has a serious conversation with one of the locals

Even as the rain dissipated, we entered a thick forest, thereby sheltering us even more. Of course, this also meant that the trail became even more technical, being laced with stones and roots and a bit of mud. 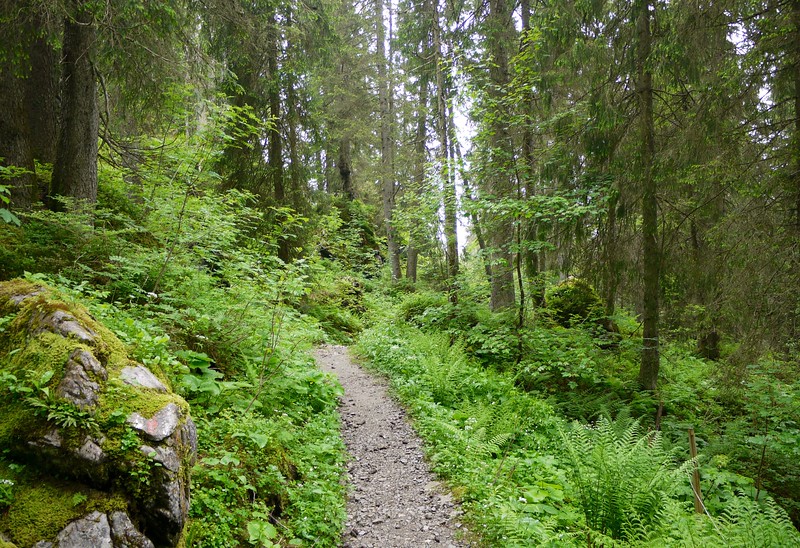 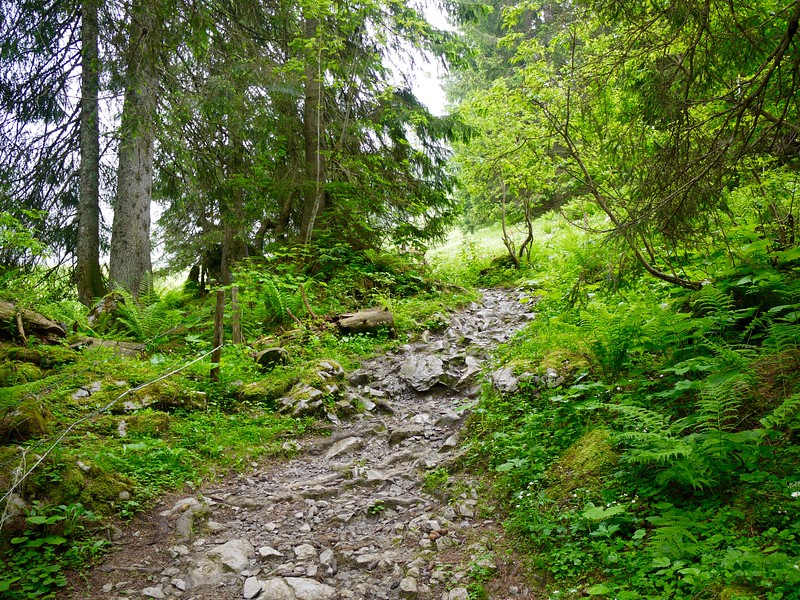 We were descending quickly. Our goal was the village of Brunni, where we would catch a bus back to Einsiedeln and home. We passed a couple more Alpine restaurants, and one farm which was selling fresh cheese from a refrigerated case near the path. Farm-fresh cheese? Is there even a question on if we should stop? 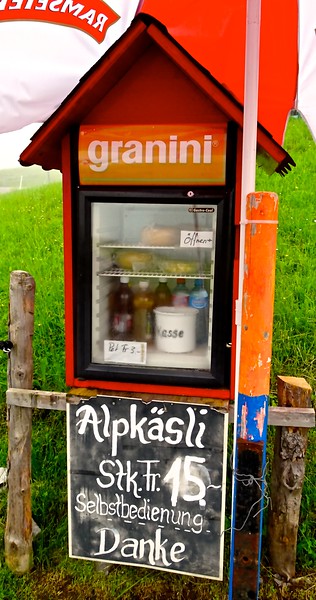 It tastes wonderful, too!

Dan had been promising me that we were “almost there!” pretty much since we got off the cable car back at Seebli. Therefore when he told me that we were “almost there!” (again) I didn’t believe him. But this time he was right. The wanderweg sign pointed down hill and listed “Brunni – 35 minutes”. Excellent! We were currently under the landing area of a ski lift while the rain fell around us. 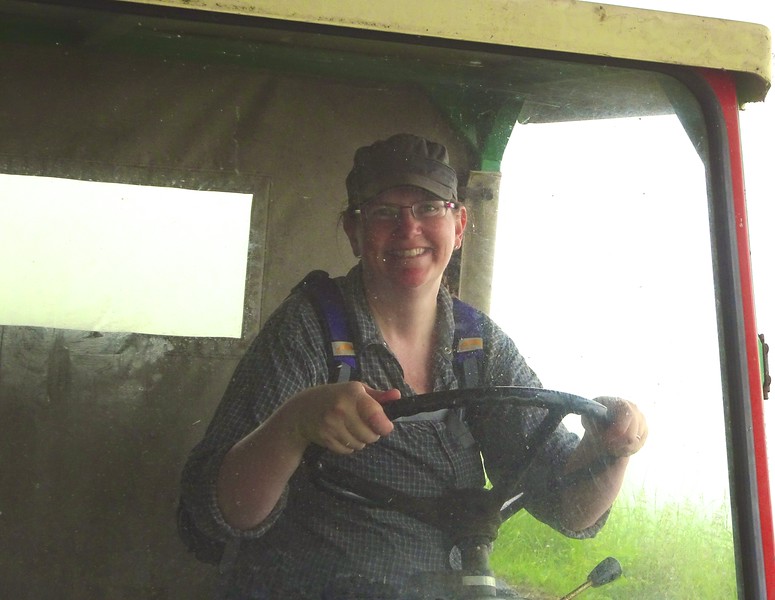 Can I just drive the rest of the way?

The half hour left was about 29 minutes too long. I am still working on finding the perfect solution to my feet and I had reached my limit. And now it was a steady downhill, on rough, rocky terrain and I was again wishing I had the trekking poles. We were not alone on the trail. Coming up was an older man with his colorful rainbow umbrella (yes, it was still raining, although slowly tapering off) and not too far off was a local farmer gathering his milk cows for their afternoon milking. We both stopped to watch as the cows happily followed him across the rocky ground and up to the shed.

Cows lined up for milking

Brunni in the distance – that’s all the further I have to go!

We were in the forest when I first heard what I thought was a lawn mower, or some farm machinery. It revved periodically and I wondered just what it was. As Dan and exited the forest we had our answer: a trials bike. As we had just exited through one of the cattle gates (this picture is the closest I can find to what it is), I seriously wondered how he would get through. No problem! He merely pulled the bike up onto its rear wheel and pushed it through. Because a trials bike is so narrow (not having a seat can do that), it fit nicely between the metal bars. With bike and rider through, he gunned his way up the wet, rocky path to parts unknown.

The Swiss transit system was once again in top form: we only had to wait nine minutes for the bus to arrive in Brunni. Imagine that: a village with a population of less than six hundred people, tucked deep in the mountains, and yet there was a bus to whisk us off to the train station.

The final numbers for the day aren’t very impressive, but at least I completed the day without any drama. And now that we’ve seen the photos of what I should have seen, Dan and I have plans to return.