In the Vosges Mountains of France there is a rounded mountain that is referred to as Le Grand Balloon. At just over 1300m it is a higher peak than I’d expect north of Basel and the map showed that the roads leading to it looked wonderfully complex. Therefore when a fellow motorcyclist on a local forum suggested that as a destination for today’s ride, I did not hesitate.

Truth be told, I did hesitate. The forecast was for widespread showers over the entire day, over the entire area. But hey, who says that every ride has to be in ideal conditions? And besides, by going with someone who knows the roads I’d be sure to experience all of the “right” ones. So I suited up, met Raymond at the local M-Parc and we headed north to Germany.

It was a quick 20 minutes into Germany and we stopped for coffee and then rode another 30 minutes into France before getting on some of the smaller, twistier roads. The weather was overcast and wet – the rain was light but never far away. Raymond took it easy up the mountain and I found myself thinking a lot of the road that leads out to the Lost Coast in NorCal – but in much better condition.

The road was marked at 70km/h, but I found myself doing about 60 in the rain and unknown roads, slowing down considerably for some of the hairpin turns. We reached the top, shrouded in clouds and then crossed along a ridge line. That’s where I stopped for these photos (I’m putting all of them in here, just because there are so few): From there, the weather got bad. The clouds moved in thick, creating about 30′ of visibility. Rain and misty droplets covered my visor. Raymond had to take off his glasses just so he could see. Gravel started to appear in the corners and then – oddly – three of the next switchbacks were cobblestone. Yay! (and no, no pictures this time). A few piles of squished manure were soaking in the rain and I was wishing that I had my heated grips installed. I was thankful to at least have the heated jacket on. Just how cold was it? Well, we stopped at “the top” of the next mountain and I could see the snow flakes drifting down in the wind. Yep, it was cold. There was also nothing to see at the mountain top restaurant (I had to take Raymond’s word that there even was one, the clouds were so thick) and we kept on going. The snow went back to rain, and then some sleet pelted me before going back to rain and always, thick clouds. We started to pass a lot of ski lift cables and small patches of rotten snow at the side of the road. But we were on our way down and the weather was letting up slightly We stopped in the town of Munster, France and had some hot chocolate. Oh my, but did that taste good! By then we had dropped below the clouds and the sun was even trying to shine. I was no longer cold and looking forward to the return trip home. I have every intention of dragging Dan there some sunny, warm day. And I’ll stop for proper photos, I promise!

A couple of co-workers of Dan’s also ride motorcycles and invited us to join them on a nice day ride through the Volges mountains in France. I had taken a short ride through this area once before, but the weather was not very good and besides, I really wanted Dan to see this area as well. We met up at 9am and Jean-Marc led Bob, Dan and I north to Mulhouse and then took us into the mountains for a few hours of fun.

While I had said that I’d want to take a lot of pictures, I really didn’t feel the urge to stop. Besides, I had attached Dan’s little Cannon PowerShot Elph to my tank bag (my PowerShot died on the trip to Grimsel earlier in the week). Unfortunately for me, a friend had changed the settings to “manual” the last time we used the camera and I never even considered checking the settings this time. Therefore the photos I took from the back of the bike are washed out and, quite honestly, horrible. I was able to salvage a few of them, but they’re poor quality and don’t give the viewer a true idea of “the ride”. Here’s an example of the type of photos I had to work with:

Fortunately Bob took some pictures and is allowing me to link to them here. Thanks, Bob! The ride was fantastic. We couldn’t have asked for better weather and the roads were in great shape, although the gravel sections did slow down Jean-Marc a little bit, him being on a sport bike while the rest of us were on dual sports and used to such things.

We traveled on a wide range of roads, from narrow little unlined lanes through the forests, to fast pavement leading from village to village along the valley floor, to tight switch backs that carved their way quickly up (and down) the mountainsides. We made a short stop along the way at an isolated restaurant at Ballon d’Alsace, watching a parade of motorcycles zip by in the summer sun. While there is a high percentage of BMWs on these roads, there were also sport bikes, sport-touring bikes and a gaggle of historic classics that rumbled by. There were very few cruisers or Goldwings, which was a big change from what I am used to seeing in the States. We reached the town of Gerardmer just after noon and stopped for a bite to eat. It was very relaxing to sit outside, watching as the clouds gathered over the hills and enjoying our meals. We decided to gas up for the return trip and then headed up to the Le Grand Balloon

It seems that even though the world has an almost infinite number of things to see, there is almost always something that reminds me of a place I’ve been. In this case, a number of the roads on the way to lunch were reminiscent of northern California roads, specifically north of Eureka. And then there was the stretch of road through wide open, green flower-covered hills that reminded me of the area around Petaluma and Napa in California. The last stretch before reaching the flat plains below the Vosges was almost exactly like the road leading out to the Lost Coast in California – except that this pavement was perfect. Similar, yet still very different. 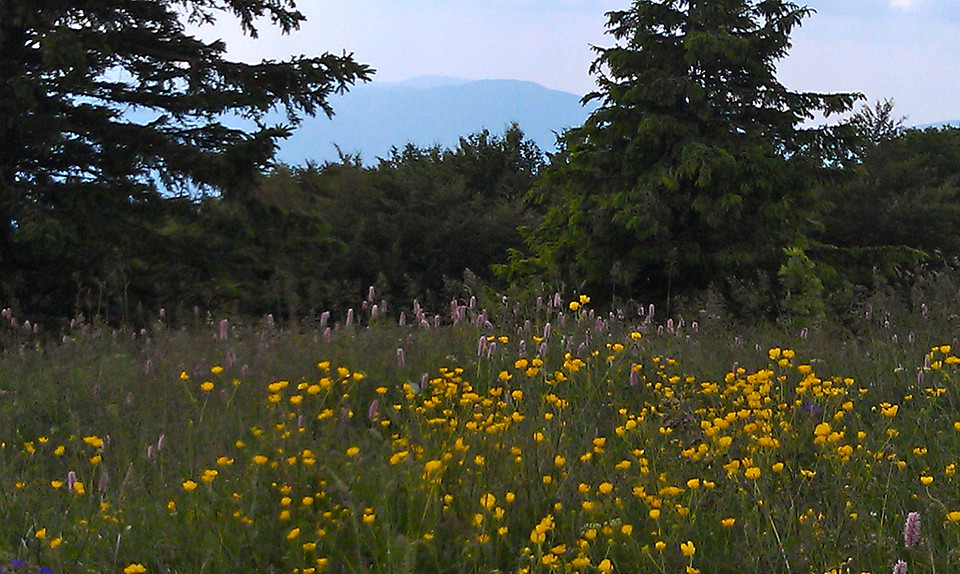 If you zoom in on the map link that I provided, you’ll see that we did our share of twisty roads. I confess that it has been too long since I’ve ridding in a “sporting” manner, and Dan doesn’t get out on his motorcycle as often as I do, but by the end of the day we were both feeling much more confident with ourselves and our bikes. Of course, having as much practice as we did on roads like these is bound to produce great results!

We crested the Grand Balloon and stopped a little further down for another drink. It was much cooler here, but the view across the plains below us was good enough to warrant us sitting outside in the sunshine. It was a quick ride home (I have a new “high speed” on the Transalp of 93mph!) and we were back in time for dinner at our neighbor’s apartment. What a great day!