Dan had planned another hike with his work group and promised me that this one would be easier than the last one. I hoped so!

It started out early, meeting the others at the train station in time to catch the 6:59 am train. That did not allow for much sleeping in. The group was pretty big – thirteen of us in all – but the dynamic was a good one. Most of the group were native German speakers, so it was a great chance to practice my language skills. It was a quick change of trains in Bern and then onto a bus in Fribourg that would take us to the start of the hike: Schwarzsee.

The elevation for this trip didn’t look too bad; it was the length of the hike that was the “difficult” part: it was to be just over 16 kilometers. However, I don’t mind distances so I was looking forward to it.

Hiking from right to left

The Schwarzsee, out of view in the valley

Morning clouds still in the valleys

Going up a little further

I’m still with the group!

The day was perfect: it was forecasted to be a warm, sunny day and they got it right. I had expected a bit more “fall color”, as we found when we hiked near Visp last year, but still: the mountains were beautiful. 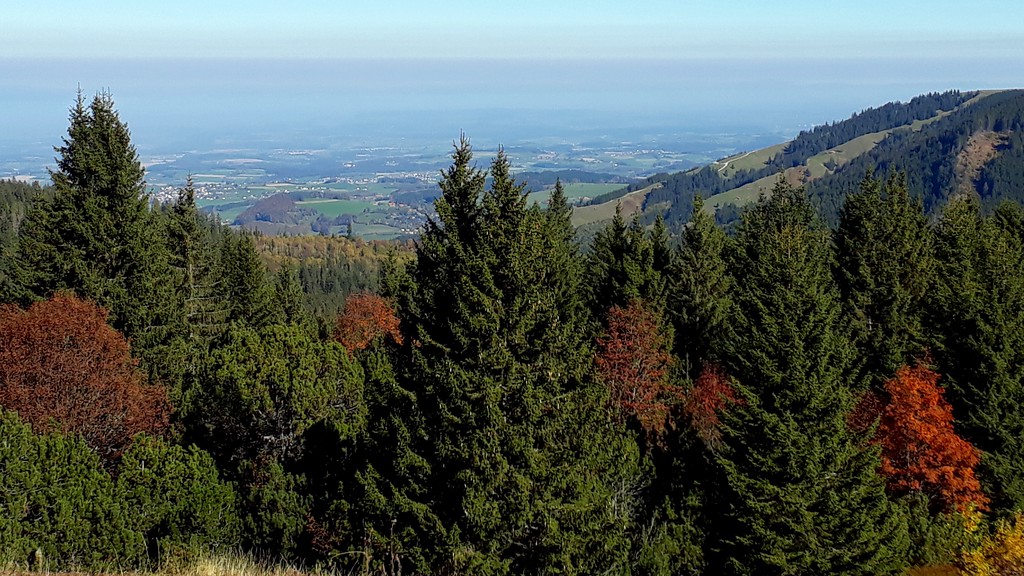 A lot of pasture hiking

The down before the last “up” 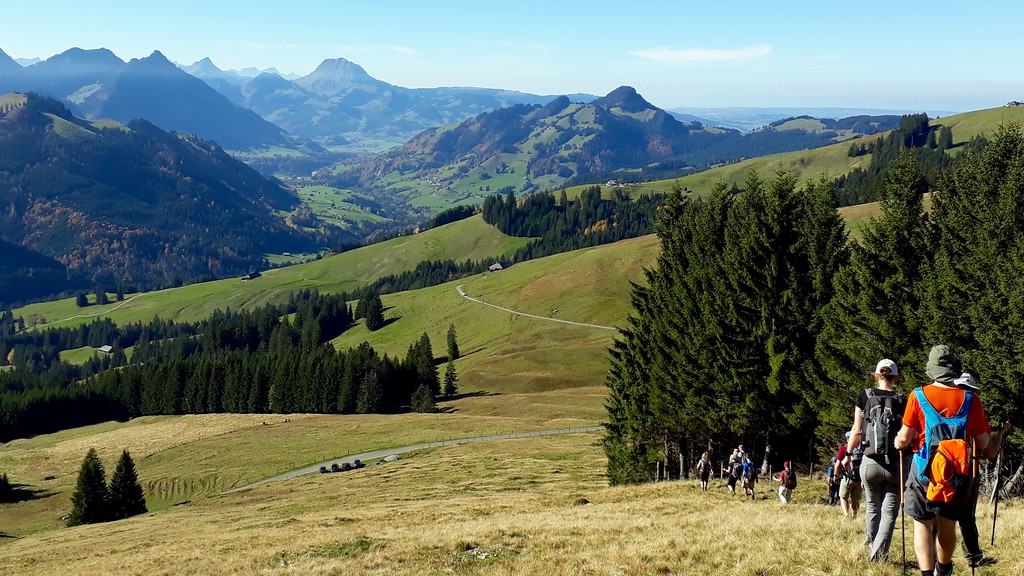 I never got tired of looking at the mountains 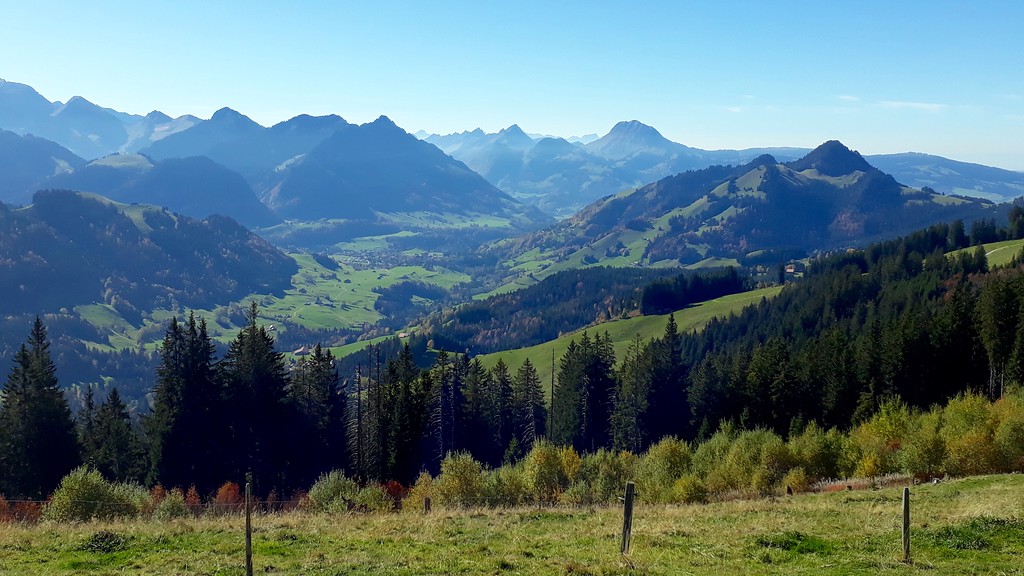 Looking back – snow covered Alps are peeking out!

Apparently I either need to see my goal clearly, or have no idea of where it is. The last stretch before we reached the peak of La Berra, I had two false summits. By now I was way behind everyone else, so I muttered under my breath (what breath I had, that is) and trudge along the path. I had reached my standard state of hiking frustration and was glad that no one was around to hear me. Poor Dan: I cursed him for leaving me behind, but I know that if he had stayed back with me, I would have cursed him for being there. The poor guy just can’t win!

The summit of La Berra was full of people!!! Big people, small people, old people, young people. I sure as hell know that they didn’t all hike up here like I had – so what was their secret?

Ah, that’s the way to do it! Ride up the side of a mountain and then “hike” up the last five minutes. Oh well – I had enjoyed the sightseeing on our hike.

The snow-covered Alps are actually behind us

Going for the “fall foliage” shot!

Once we had indulged ourselves with the great view and lots of photos, we started our descent. But before we got too far: lunch! Nothing like a little reward for a half day’s efforts. The poor waitress at Le Gîte d’Allières was overwhelmed with our group’s orders but she did a good job of getting us our drinks and food. It still throws me off when I go somewhere in Switzerland and they don’t speak German!

The post-lunch portion of the hike was a fast descent: our guide shunned the gravel road and instead suggested that we stick to the trees and the signed snowshoe route. The trail was not prepared for snowless foot traffic: it was muddy and slippery in parts, and rocky with tree roots in other parts. Once we left the forest behind we were again in pasture land, but this time it was still lush and green.

Looking back up the road 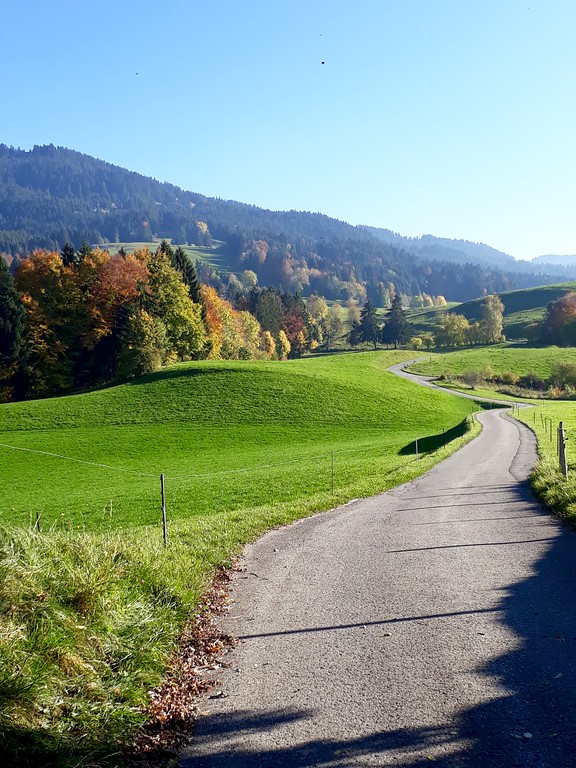 At one point the entire group came to a standstill: the wanderweg had been lost. The road we had been following ended at a farmer’s house. What to do? Apparently the farmer somehow noticed a dozen people milling around outside his barn and came out to see what the occasion was. He was kind enough to point us along the right track: around his cow fence and through his fields.

It was just a little bit further down and through some neighborhood streets when we saw the bus stop. While the bus currently sitting there was not the one we wanted, we only had to wait two minutes for our bus to come. I must say, I do love the Swiss transportation system! We ended our day back in Basel around five o’clock – it had been a good hike with some very nice people and fantastic views.