We’d heard all about Fasnacht and knew that we’d be checking it out, but someone casually mentioned the “fire parade” in a nearby town. What’s this? Another festival to investigate? We’re on it! For a quick review and history, the Wiki link below is probably the best source. All I knew before going was that it was recommended to wear your least-liked clothes, as they would smell of smoke by the end of the night, and there was a real chance that they could be damaged by falling embers. It was getting more and more interesting!

The train ride to the town of Liestal was only 15 minutes. The SBB was running extra trains for the event, so I knew that it had to be big. We got off in the dark, the parade rumored to start around 7 pm. While I had taken a peek at the route map beforehand, I had no idea of the town’s layout and we ended up following the mass of people for a while. And then we found ourselves near the route. I could only tell this because there were two walls of people about 10′ apart facing each other. The space in between was the route. We stood about 3 people back from the edge and tried to hold our ground. It was madness.

Beer flowed freely all around us, with even a champagne bottle being uncorked by the loud and obnoxious English-speakers nearby. People shoved their way through the walls, trying to get to the other side, or trying to get further into our side. Other people pushed their way into any open space, hoping that they could claim it as their own for the duration. Other people told them to go away and they did. In general, it was not at all comfortable for me to be in such close quarters, but I held my ground and stayed close to Dan.

And then the crowd murmured and looked to the right. There was a slight downhill coming from the right and I could see some lantern-headed people marching their way down. This was a precursor for what I’d see in the morning and my photos sucked. But then a bright light caught my eye: fire! Here came the real participants. I’ve only posted some of the pictures on this page. The entire collection can be seen on my Smugmug page. The bundles are of pine and are made individually by each bearer. This is evident after seeing a few of them go by, as some are already falling apart, some have gone out and others are burning full and bright.

This is one of the first wagons to go by. I had heard about “wagons full of burning logs!” and assumed that they meant this. They were, for the most part, not talking about this kind of wagon.

Oh my! What’s this coming down the hill?? 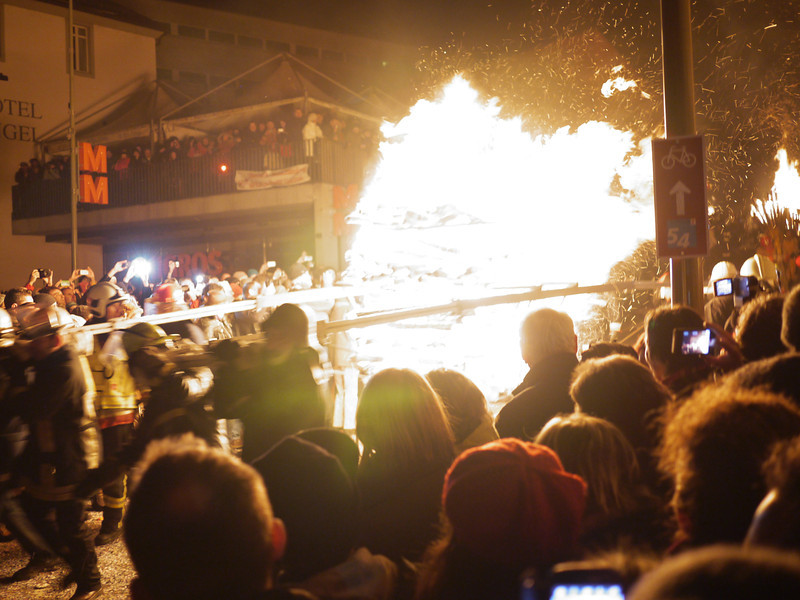 That’s some very hot flames – and not much room for the crowd to pull back.

And away it goes through the gate! Fortunately for us, the weather was perfect. There was a very light breeze that blew most of the smoke and embers to the other side of the route. That’s not to say that the heat didn’t get to us. Fire is hot!

The procession would often stop on its way down the hill, making sure that the group before made it through the gate and giving the firemen a chance to hose down the ancient wood. This gave me a chance to study the participants and their garb. Another wagon! I think there were about 5-6 of these, each one getting bigger! Firemen were everywhere, and rightfully so. An earlier Fasnacht parade had left the streets full of paper confetti and the bundles of wood dropped embers as well as burning chunks to the ground. The firemen were busy keeping things under control. Usually the wagons stopped just above or below us, so we were spared the effects of having it burning just a few feet from us. Others were not so lucky.

Even those who sat in the buildings along the route kept the windows closed. And through the gate it goes!

It really was amazing to look up the street and see this coming towards me, knowing that its descent was controlled only by a few men and tow chains. The wagons were interspersed with the bundles of pine. These ones were a little loose in their construction.

You really can’t grasp how big these wagons can be until you see one. go through the gate.

And then there was no more fire coming down the road. We made our way out of the crowd, most of them apparently content to continue the party right there on the street. We went back to the train instead, knowing that we had an early morning ahead of us.