My sister and her daughter were in Europe for a mini-tour and they invited me to meet them in the town of Bad Mergentheim, Germany. Why Bad Mergentheim, you may ask? Because that is the town that our great grandmother emigrated from back in 1908 and we thought it would be interesting to see it.

I packed up the BMW Tuesday night and rode to work on Wednesday. It was hard not to leave the office any earlier than I did, but I was on the road by 4 pm and heading north. I told my sister that I’d try to be there by 7:30 for dinner. Unfortunately I forgot to account for traffic and construction in my estimation but still I was only twenty minutes late.

I wasn’t really looking forward to the ride north, as it would be almost completely on the autobahn and through some post-work traffic. Not to mention the fact that it was forecasted to be 37C (98F) for most of the ride. It also didn’t help that while Wednesday’s ride was supposed to be hot and sunny, my return ride on Friday was forecasted to have heavy rain. I had to chose between mesh gear and waterproof gear; I opted for protection against the rain.

Just outside of Stuttgart I ran into the dreaded traffic. The highway sign warned of 6 km of back ups and I think that they were spot on. I looked at the temperature gauge on the bike: 36C. The speedometer read 15kph. I made the decision to lane split, turned on my hazard lights and worked my way up the center line. Most people were already off to the side and didn’t need to move, some were gracious and moved over as soon as they saw me and a few were oblivious and never made an effort one way or the other. I eventually got back onto the open road and hit about 150kph (the bags made it uncomfortable for anything much more than that). I love not having a speed limit.

Finally, twenty kilometers from my destination I was able to get off the motorway and enjoy the scenery. It was the fastest thirty minutes of the entire ride. 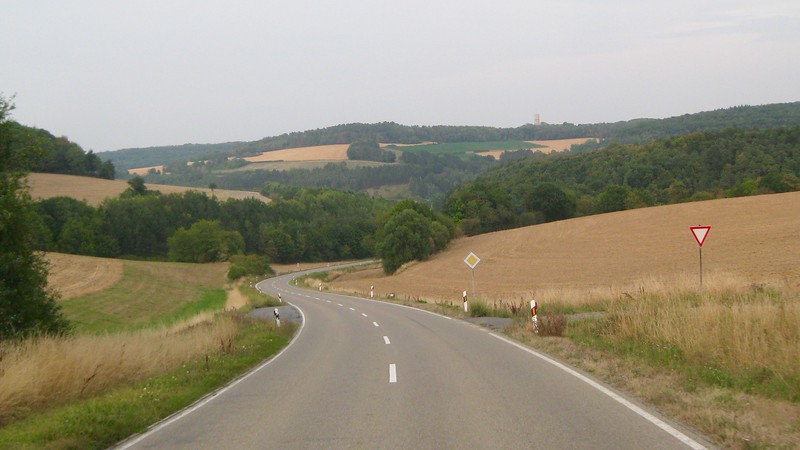 I rolled into town at ten to eight, found my hotel and went inside. My sister (Jennifer) had left a note saying that they would return at 8 o’clock. That gave me just enough time to park the bike, unload my bags and get changed before she came to the door. 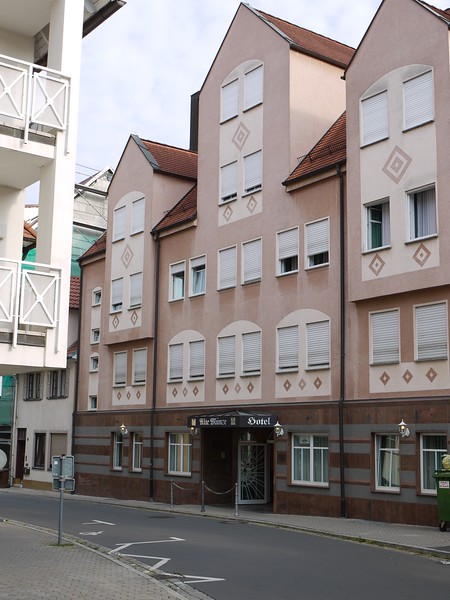 The city Rathaus and seal of Bad Mergentheim

We went out for dinner (they had eaten, but now it was my turn). By the time the meal was over and ice creams were eaten, the evening was over and time to turn in for the night. However, my own curiosity about the town was piqued and I decided to talk a short walk around the city center. Having no idea of the town layout, I managed to get completely turned around and had to backtrack a number of times before I found my hotel again. It was a pleasant place to get lost.

While my hotel included breakfast, I declined to eat outside despite the warm weather. I think it had something to do with the other patrons already on the patio:

Many wasps in Germany

Jennifer and her daughter Maggie met me at my hotel and we began our walking tour. While Bad Mergentheim was mentioned as far back as 1058, it didn’t become well known until 1826 when the rich mineral springs in the surrounding area were discovered, during the time when spas were expanding in Germany at a rapid pace. The water turned out to be the strongest sodium-sulfate water in all of Europe, especially effective for the treatment of digestive disorders. I tried the water and have to say that I’d rather not try it again.

One of the many spa-related buildings

Playing a quick game of chess

We met up for lunch with the woman that Jennifer would be staying with and spent some more time exploring the town. I would have like to have visited the Rathaus and asked if they had any information on my distant relatives – or even just an understanding of what the village was like over 100 years ago – but time was slipping away.

After lunch our “local guide” showed us the inside of the Baroque church located in the castle. Built in 1730, the building and artwork were both in amazing condition. The organ’s pipes filled the back of the church, but unfortunately there was no sounds to fill the rest of the air space. 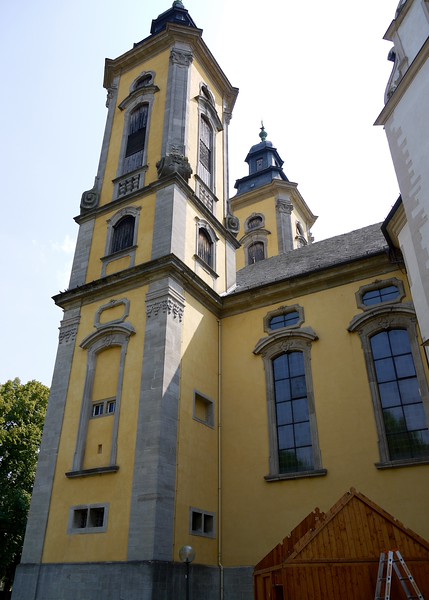 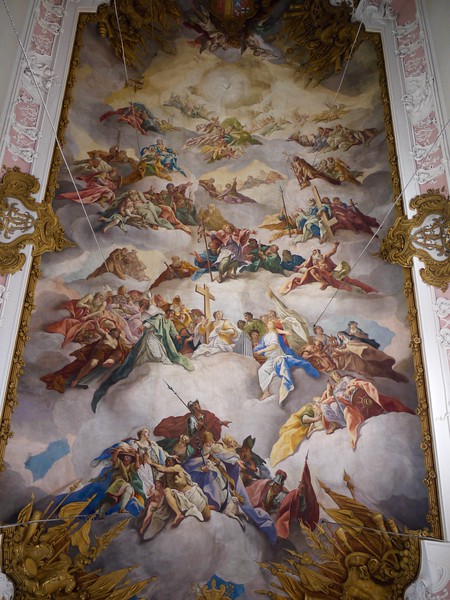 Front of the castle

We had plans to go horseback riding at Pferdeaktiv later that afternoon, but Maggie and I weren’t feeling up for it. The weather was still hot and the thought of sitting on a horse in the sun for an hour wasn’t very appealing. We decided to go to a nearby lake for a refreshing swim and then see how we felt afterwards. 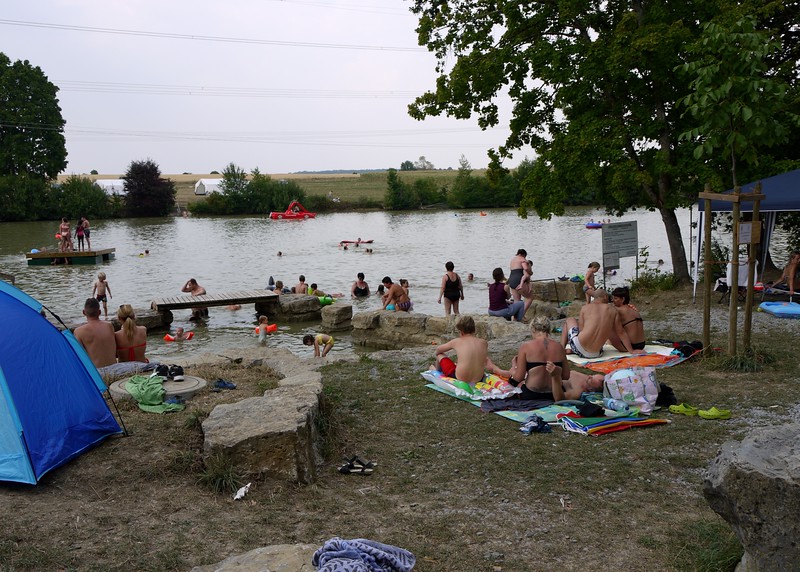 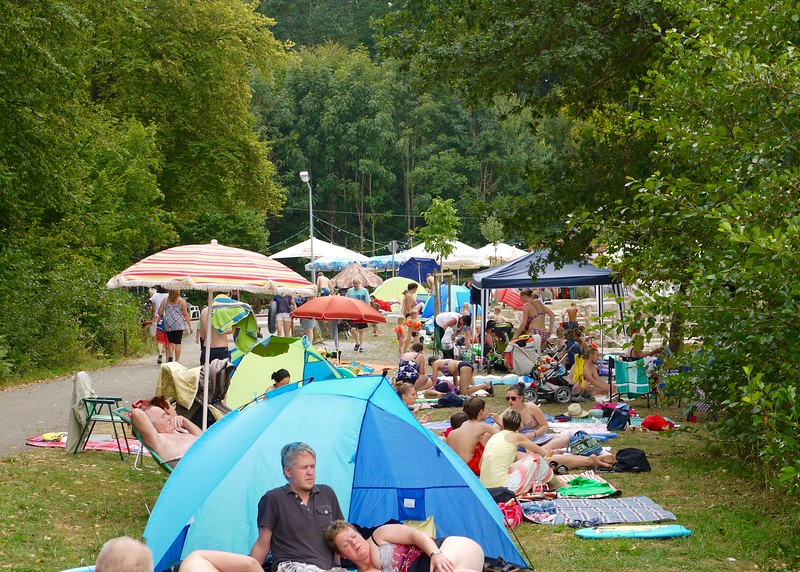 We weren’t the only ones with this idea

While swimming we realized that we didn’t have a phone, so even if we wanted to cancel our riding reservations, we couldn’t. We spent an hour in the refreshing lake and then headed for the stables. We figured that at least Jennifer would go riding while Maggie and I went into the city center to do some shopping.

Our plans changed when Tanja, our riding guide, informed us that because we hadn’t canceled with a 24 hour notice, we were obligated to pay. I sure as hell wasn’t going to hand over my money for nothing, so I said that I’d go riding. They gave me a “plugger” – a horse that would just plod down the path without any fear of misbehaviour. Normally this would annoy me, but considering that I wasn’t really excited about the riding anyway, I didn’t care. The horse was also huge! I’m not a short person, but there was no way my foot could even reach the stirrup and I had to stand on some cinder blocks in order to climb aboard.

We finally got on our horses and on the trail. We had arranged for a one hour ride, which, unbeknownst to me, meant 25 minutes of paved path walking, 10 minutes playing in the Tauber River, 5 minutes of running in a field and then 20 more minutes back to the stable on a mostly-paved path. It wasn’t the fun ride that I had hoped for, and it was made even worse when my horse decided that it had been too long since he’d been ridden and was overly excited at the romp in the field. First a buck with the hind legs to throw me forward, followed by an all-out bolt across the grassy surface; the horse was out of control. The other riders finally slowed down and I was able to regain my seat and a modicum of control.

Tanjy told me later how impressed she was with the fact that I didn’t fall off my horse, but I’ll never know if she was just saying that to make me feel better, or if I really did show some basic level of tenacity. She was a nice person though, so I like to think that she was sincere.

Our next goal was Solymar Thermal Baths. We had been looking forward to a relaxing dip in the mineral pools and now it was time. Fortunately, Bad Mergentheim is fairly small and it didn’t take us long to walk over to the spa. We said that we’d like the “Sport and Family Pool” pass, seeing especially since we were now running very late. Unfortunately, this also meant that we only had access to the standard pools and not the more interesting and relaxing thermal baths. But since we only had thirty minutes before our ride back into town would pick us up, it was just as well. 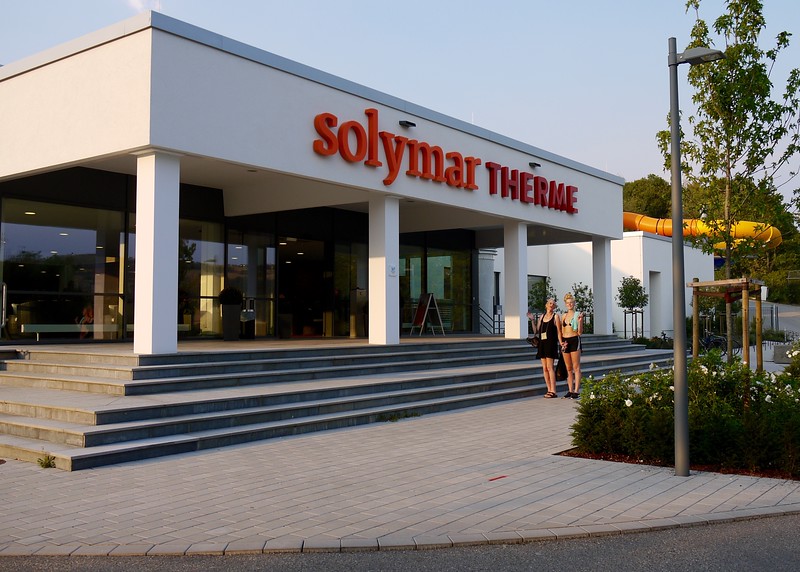 Our evening was spent having a nice dinner in a beer garten and then another walk around the city center.