Dan’s colleague Andrea invited us to spend the weekend at their cabin in the Alps. There was an ulterior motive: the Arosa Swiss Snow Walk & Run. She planned on running the 16 kilometer race to the top of Weisshorn and invited Dan to join her. It sounded like a great way to spend the weekend, so we agreed.

The drive to Lenzerheide took a lot longer than expected, as earlier in the day there was a forty car pile up on the motorway, with seventeen injuries. Fortunately we were not part of the mess, but if had only been ten minutes later, we would have missed the detour that added an additional forty five minutes to our journey.

The temperature gauge in the car kept dropping. By the time we pulled into the mountain village of Lenzerheide it was -17.5C and pitch black. I could only imagine how beautiful it was outside. I dreaded the frosty run from the car to the cabin but it was quick. Soon we were inside and sitting down to a hearty meal. 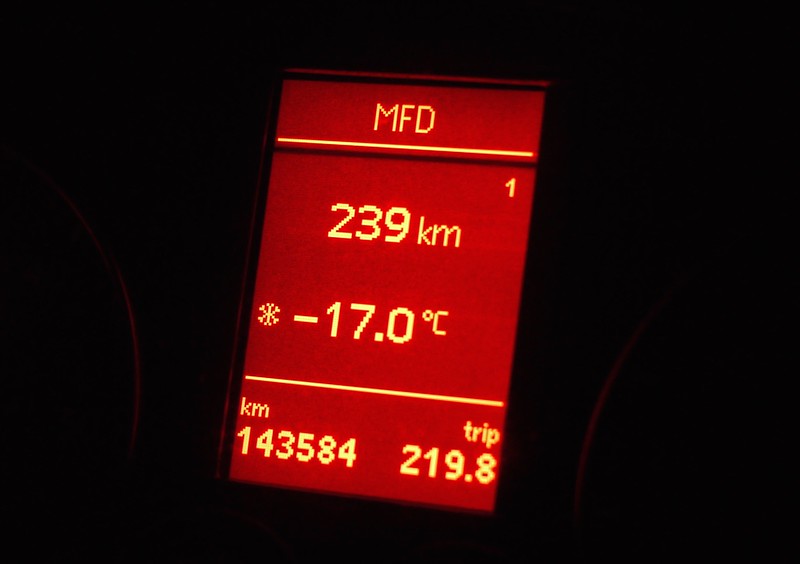 Although we arrived in the dark, I was looking forward to seeing the cabin and the village in the sunshine of the next day. Instead, we got up, had breakfast, walked into town and got on the bus – all before the sun rose. By the time we got off the bus in Chur, the nearest city, the light had filtered its way through the clouds and begun to illuminate the surroundings.

It is not a direct trip to Arosa. The bus ride into Chur was about thirty minutes, where we then waited fifteen minutes for the train. Once on the train is was an hour’s trip back up into the mountains. We were fortunate to get seats on the train; I think that every athlete within a 300 kilometer range had shown up for the events at Arosa. I noticed a bag in the overhead with text indicating that the owner was a Champion from 2012 – it looked like Dan would be up against some stiff competition!

Here we are, waiting for the train to Arosa

View from the train 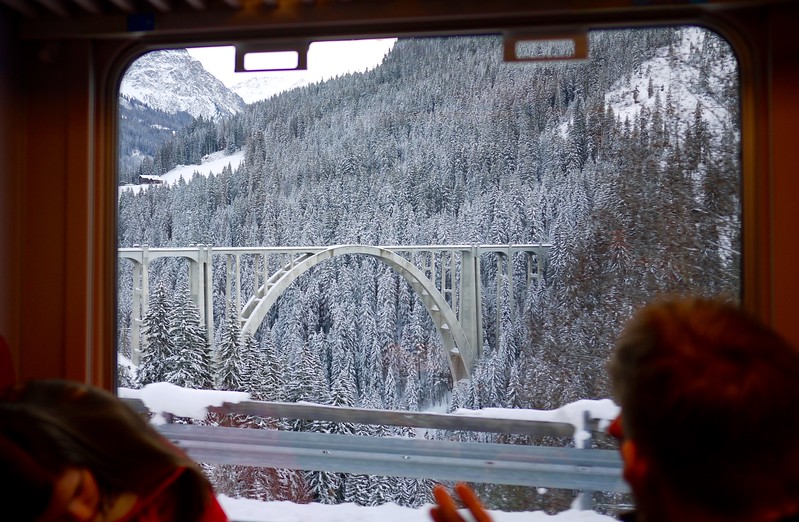 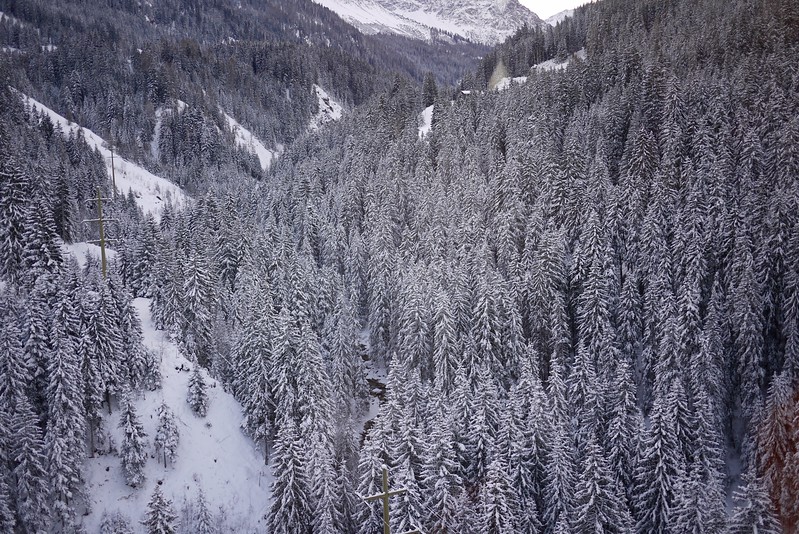 We arrived in Arosa and disembarked from the train with hundreds of others. It was an easy walk to the other side of town where the race headquarters were located. The town was centered around a large play field, with an oval track ringing the outside. We skirted the snow-covered field and went right passed the Hotel Holiday Villa. This normally would have been nothing of note, but I had seen in the paper that there had been a large structure fire in Arosa the week before and this was it.

I snagged some pictures from the paper because this was not a small fire and thought that you might find it interesting. Here is a link to the actual article: Link to article

During the fire (file photo) 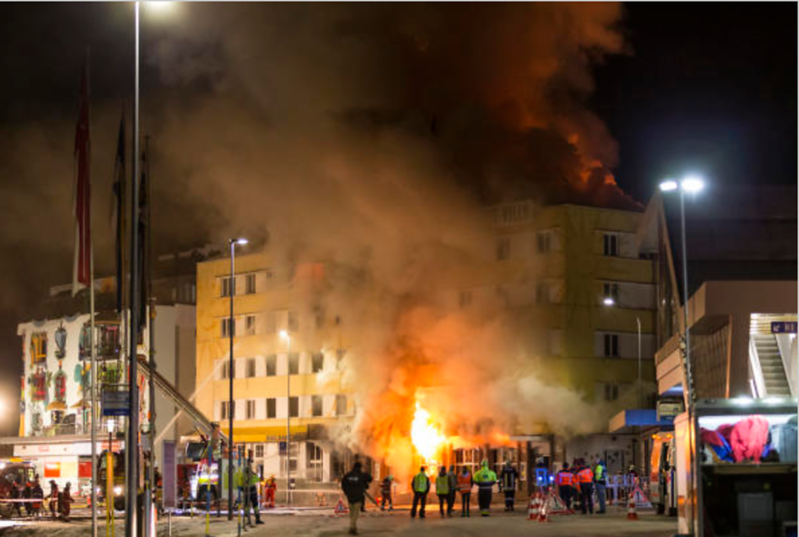 We went into the headquarters, got our participation bibs and rearranged clothing and packs for the day.

Dan and Andrea would take part of the sixteen kilometer run up Weisshorn, the top of one of the local mountains. I would participate in the much more sedate 6 kilometer walk around the lower elevations of the village. Alexandra, Andrea’s daughter, agreed to play Sherpa and watch our bags for us.

I went out into the cold (-5C) to see Dan and Andrea off at the starting line, the first time I’ve ever been to an event like this. It was really fun to see the crowds and the warm-up activities. 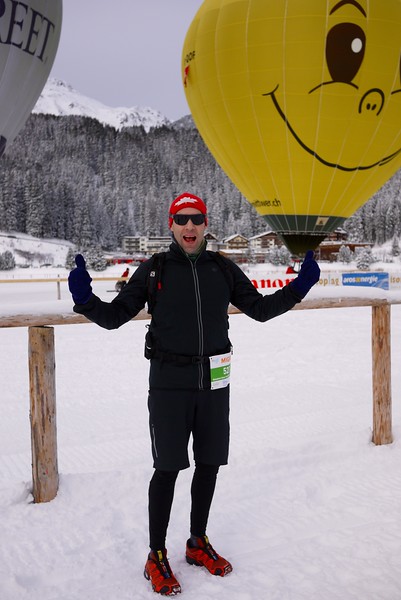 View across the field to the burned out hotel

I found out later that the “field” is actually a lake. Ah, I love the deviousness of winter.

Organized warm-up for the participants and the mascots 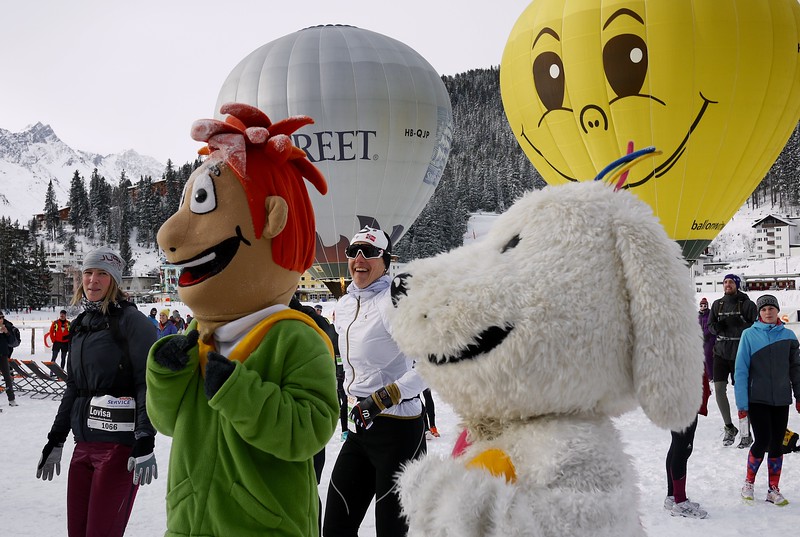 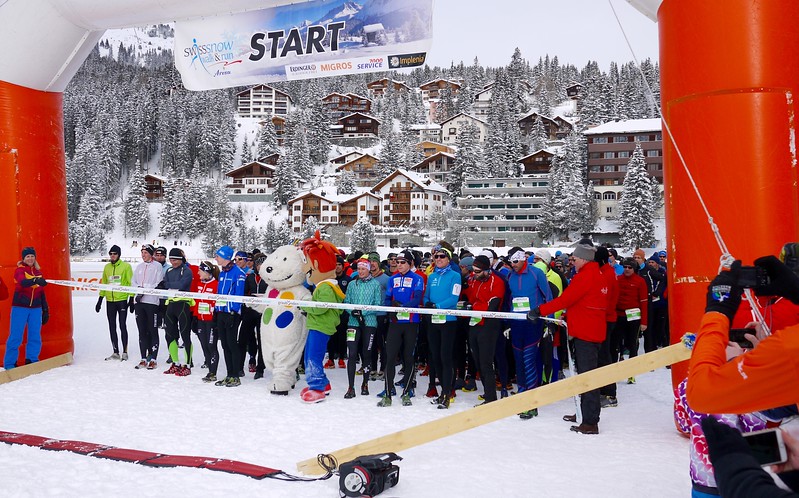 And off they go! 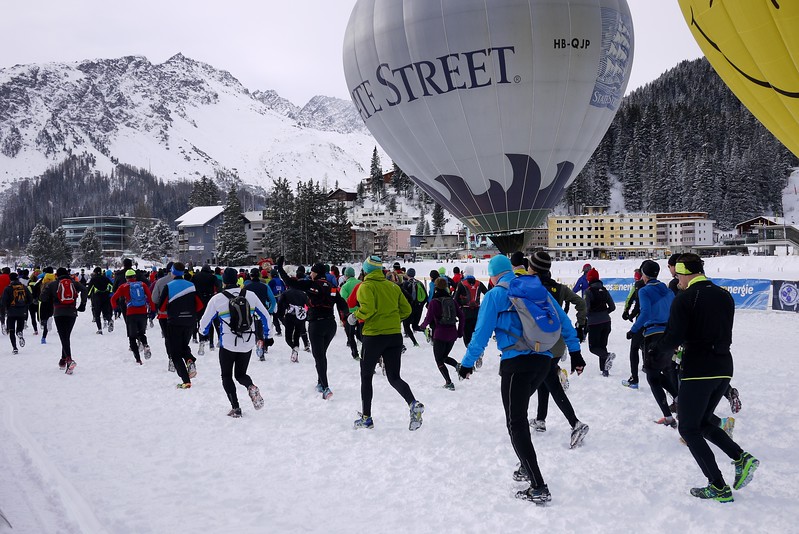 After Dan was out of sight, I went back into the race headquarters to wait with Alexandra for my own even to start. I wasn’t too worried about it: I’ve done a lot more kilometers in one stretch and the weather was getting a little bit warmer. Eventually I went outside and sized up my competition.

I saw families with children, groups of old women and pairs of middle aged friends and couples. I stood around and watched people make their way to the start line as the announcer counted down the minutes. I took a photo of myself to commemorate the event. 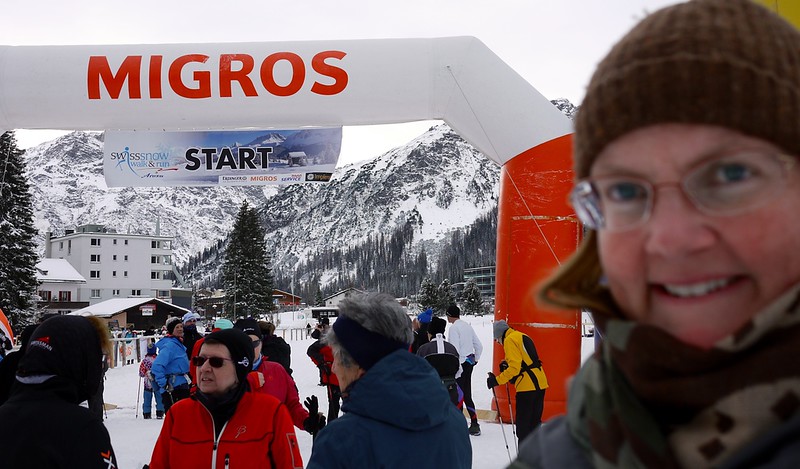 With the sound of a pistol shot, we made a mad dash for under the starting gate and around the outside of the lake! Ok, not really. Instead, we all shuffled along in the uneven snow and focused on finding the best footing. I was happy when we finally left the lake and headed into the village and the forests beyond.

The path rose gently and was well-groomed. I left the village behind, the ski runs crossed the path – sometimes under the path – and then I was above the tree line and enjoying the scenery of snow-covered mountains. 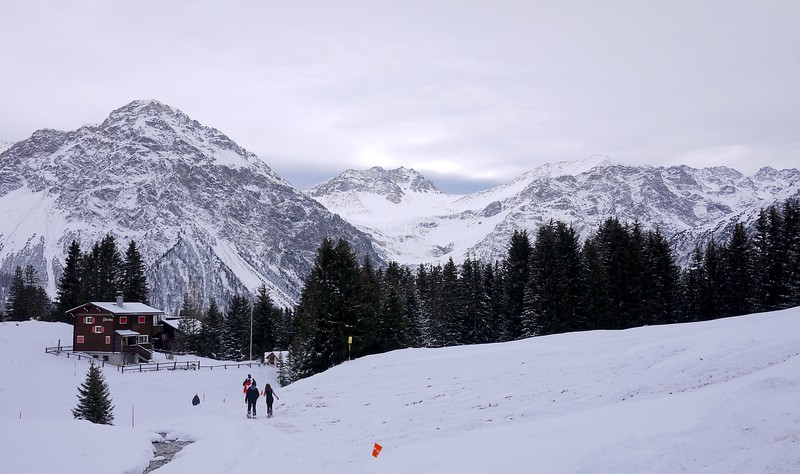 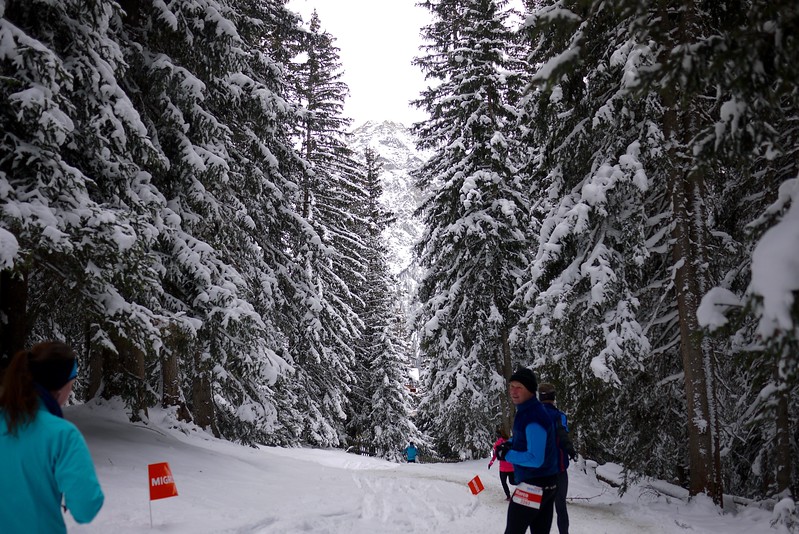 This part of the trail was shared by those who were doing more than just walking, and I tried to keep out of their way as they slipped and slid past me. I eventually reached the finish line which even at this late stage, was manned by enthusiastically cheering people.

I gathered up Alexandra and our stuff and the two of us headed to the cable car. What Dan and Andrea just ran up, we would view from the comfort of a cable car. The clouds moved in as we got to the top and were surprised to find Andrea waiting for us in the restaurant at the summit. I went outside to wait for Dan to cross the finish line, excited to be there to cheer him on for his final few meters. But as Murphy’s Law would have it, I went to the right as he came from the left and we missed each other by less than two minutes. I stood outside in the bitter cold wind until my phone rang: it was Dan texting me from inside the restaurant.

Views from the summit 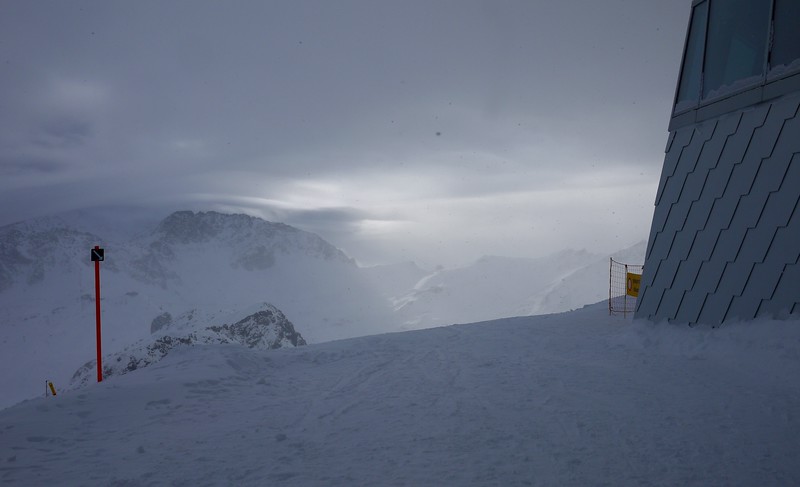 We all took the cable car back down the mountain to Arosa and waited for our train to Lenzerheide.

Ok, I admit that I was a little jealous of this kid

We returned to the cabin after dark, so Dan and I still hadn’t seen it in daylight. We had a wonderful meal and settled in for a good night’s sleep. The next morning Dan and I walked down the hill into town and took a 6 km path around the lake in town. It was another cloudy day and the wind had picked up, but it was nice to see some more of this corner of Switzerland. 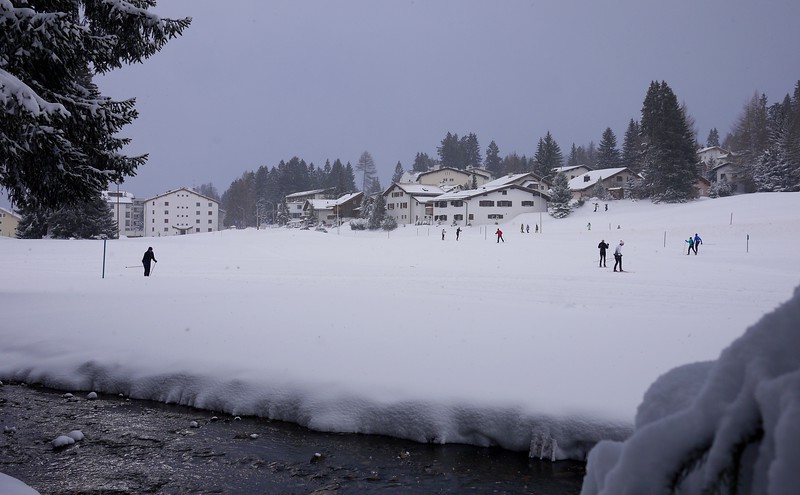 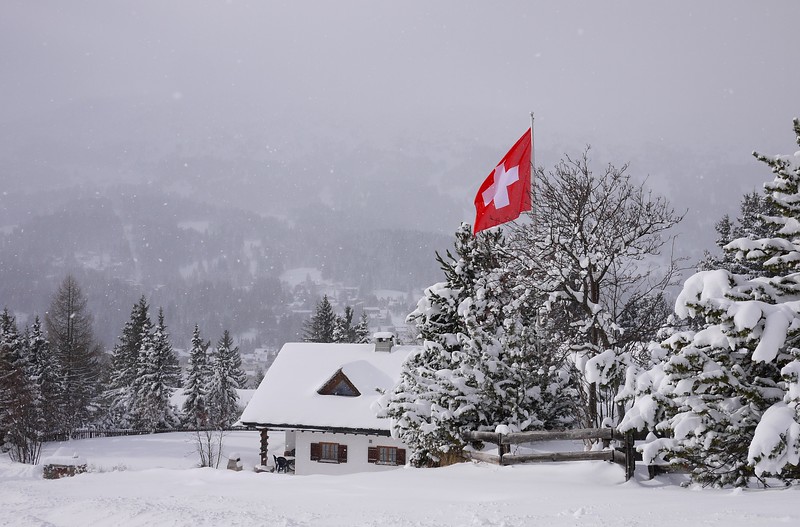 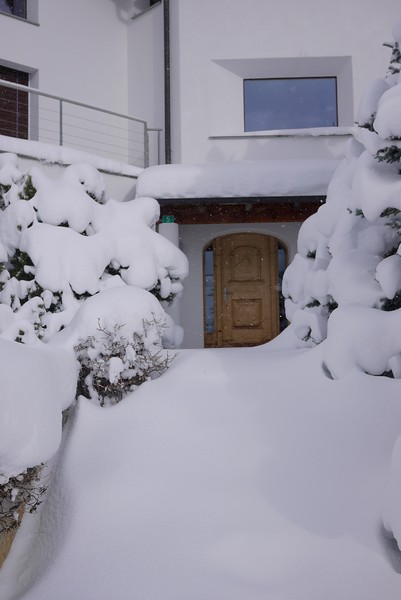