I’m tall. Well, I’m taller than most women and taller than the “average” male. So finding gear that fits me is often challenging. I guess you could say that I’m lucky that my womanly attributes are below average, so fitting the jackets usually isn’t a problem. But the part that gets me is the inseam. I swear that the average leg inseam is 31″, but I’m sporting a good 35″ of leg and the standard just doesn’t work for me.

Enter my seamstress. I know, it sounds so pretentious to say that I have a seamstress. But I met Carol while living Seattle, where she had a small dance wear shop and did a little alteration/heavy duty sewing on the side. She’s the one that large outdoor manufactures turn to when they need the latest prototype tent created. Yes, she’s that good. So it was without hesitation that I took her my gear while I lived there, feeling completely out of place in her shop in my black motorcycle gear while women and girls tried on dainty leotards and tutus.

Then I moved 3,000 miles away. I realized that there was no replacing Carol. She was The One. So I when I bought new gear and needed some alterations done, I dropped her an email and she replied “Ship it on over!” So I did.

I am so pleased with Carol’s work that I’m taking the time to show off her latest creation. I had asked for essentially two things: Make the legs longer and extend the waist zipper to be 3/4 around instead of a measly 7″. Done.

This is the new zipper. She had to replace both halves, of course, and did so seamlessly (pun not intended). The gear is waterproof, and she took the time to make sure that it remained so. A close-up of the fabric she used to support the new zipper. Good quality YKK zipper of the appropriate size/strength. The matching zipper on the jacket. She even managed to match the thread color from the original! I don’t know which half of the project garners more respect: putting in a new zipper or making the legs longer. Probably the legs, if only because she had to create something that wasn’t there. You can see below where she unstitched the original hem and then added a couple of inches. Subtle stitch line where Carol added more material to the bottom of the leg. Note that she matched the original stitching as well as added an appropriate amount of good quality velcro. She didn’t extend the zipper down the extra length – that would have been an unnecessary expense and work. This view is of the inside of the leg, showing the Velcro wrap-around flap open. You can tell what’s the old Velcro by the amount of crud caught in it. You can also see the stitch holes from where the liner was unhemmed. I also have a pair of Held gloves that I absolutely adore. After many years of use, I was dismayed to see that some of the fingertips were wearing through. I brought them to Carol and this was her solution. Five years later and I’m still wearing my gloves. 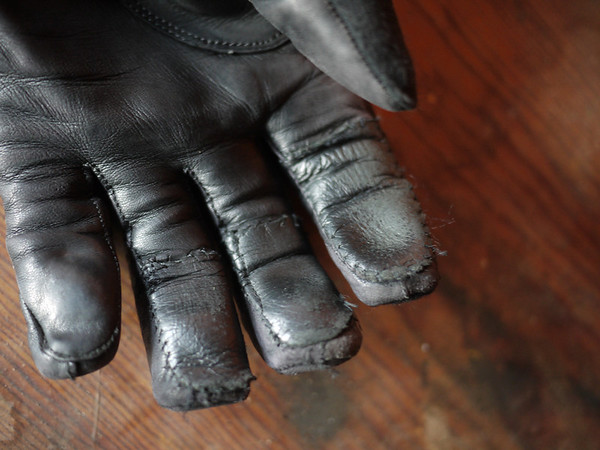 If you need some repair work or alterations done, feel free to drop Carol a line. Here’s her contact information: