It was my birthday and there was only one thing I wanted: to ride my motorcycle with Dan into the mountains and have lunch under a sunny sky. To my delight, the day was sunny and the roads were clear. My only problem was my thumb: five days earlier I had a little accident on my bicycle and badly sprained the thumb on my right hand. I could use the hand (Hey! Look at me typing this up!) but it would not very comfortable on the throttle. Oh well – it was my birthday and I didn’t care!

We slept in a bit and eventually got the bikes out to head south. Despite the beautiful day, I did not want to dedicate a lot of time in getting to our destination, just in case I overdid it with the bad hand. I had chosen Adelboden for a number of reasons: We had been there twice before (one for a Klettersteig and once for skiing), it wasn’t too far from home and a friend of mine had been there just a couple of weeks prior and confirmed that the roads were clear. I made a quick check of a local webcam to confirm that it wasn’t cloudy and rainy and we were soon on our way.

I was correct that I was unable to properly hold onto the throttle. I compensated by keeping the thumb with the rest of my fingers. This made it a little awkward to roll on/off the throttle or to grab the front brake, but it wasn’t bad enough to convince me to go back to the garage.

Living in Basel, we are about as far as one can get from the Alps and still live in Switzerland. Every time I head south I am surprised by the slow growth of the jagged peaks – assuming they are even visible along the way. Today I could see them as soon as we broke through the tunnel through our own backyard mountains, the Jura.

It was going to be a glorious day in the mountains

I love traveling with Dan

It was only two hours to Adelboden but about an hour into the trip I was wondering about my hand. Not being able to hold onto the throttle in a normal manner meant that other muscles were taking up the slack. But the weather was fantastic, the bike was running great and I had a perfect destination ahead of me. A little suffering could be tolerated!

Things got better once we got off the motorway and I could distract myself with the curving roads and small villages. The temperature was hovering around 12C (54F) and while the heated jacket was nice, it wasn’t a necessity on a day like today.

It felt good to be back out on the bike

One of the reasons that I hadn’t ridden to Adelboden is that the road does not go anywhere. It is one of those “out and back” roads. You ride to Adelboden and then you turn around and ride back. It is evident “Why?” when you look at a topographical map of the area: the road follows a long valley between two parallel ridges and eventually ends when the ridges eventually join up.

Looking back down the valley 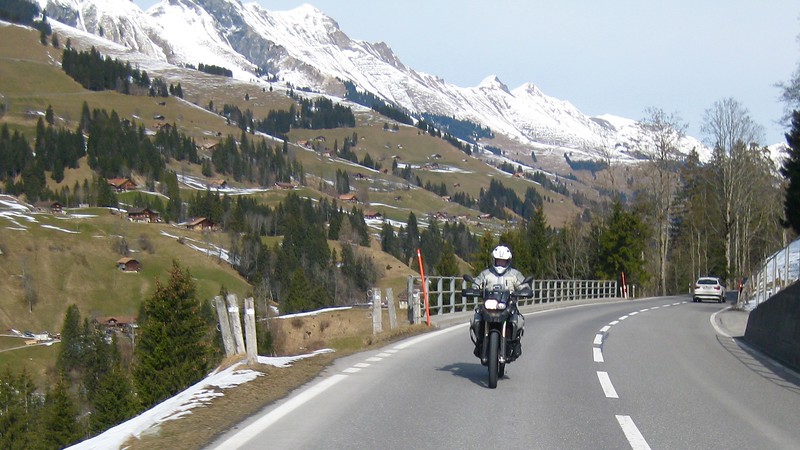 Lots of snow in Adelboden

True to my friend’s word, the roads were clear and dry the entire way. Adelboden itself was hopping with skiing tourists, as the surrounding mountains were still heavy with snow – especially on the north-facing slopes. I had done some research beforehand because I hate the indecision of walking from restaurant to restaurant, wondering if this is “the one” that we should decide upon. My decision had been made before we left home: Adler Adelboden. It was a nice looking hotel / restaurant combination with outdoor seating that overlooked the mountains. Perfect.

My very own peak!

We found the last open table on the terrace, as the rest were all taken by families and groups still clad in their ski gear. I ordered schnitzel (although I should have ordered the cordon blu) and Dan ordered…. “something”. I don’t know what it was called, but it was big. Really big.

After lunch we walked around the town for a little bit, enjoying the sunshine and the views and letting our lunches settle in. It was nice to relax, instead of having to jump back on the bikes in order to “get somewhere else”.

We joined a long line of cars leaving Adelboden. That’s one of the disadvantages of an in / out road: Everyone has to take the same exit at the end of the weekend.

Because of my hand, we decided to take the motorway back to the southern side of the Jura Mountains, but then jump off the traffic-laden lanes and instead meander our way home through the rolling hills of our backyard.

Oh look! It is lambing season!

Dan called out over the Senas that he was stopping to look at the lambs in the field. I circled back to join him. As we watched the fuzzy critters much on the spring grass, a local man (who apparently owned the flock) started up a conversation with us. He was hard of hearing, and I had my helmet and ear plugs in, so it was difficult to understand him fully. But among some other tidbits of information, he told us that the lambs had been born that day and were about three hours hold. So tiny and new!

It had been the perfect Birthday Ride and I am looking forward to a healthy hand for my next trip out on the bike!